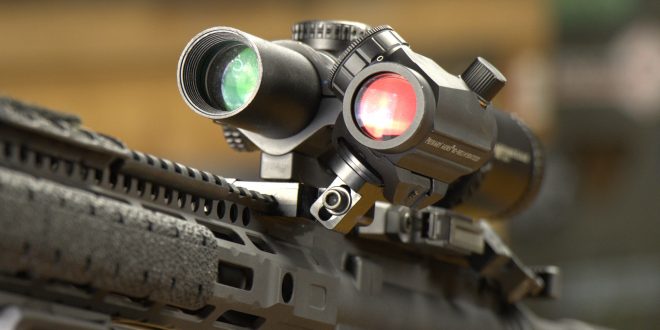 Offset-mounted red dots are obviously nothing new. I’ve utilized a mini red dot sight in a 45-degree offset mount on my duty rifle since 2012, during all three of my Afghanistan combat tours (See Part 1, Part 2, Part 3 and Part 4). Born out of the competitive shooting world, offset red dots allow a practical and effective way to run dual optics (red dot and a LPVO) on one’s rifle. So, when a new take on the offset mount was created by Bitshaky Defense, I wasted no time in trying one out.

Just what is this new take? In one word, adjustability. The Bitshaky Defense Adjustable Offset Mount (AOM) is an innovative design that allows the user to adjust for both degree of offset angle and height above bore (height of the optic off the mounting point). So, for instance, if one desires, say, a lesser degree of offset, perhaps 20 or 30 degrees, the AOM can be adjusted to that. Vice versa, the AOM can also be adjusted all the way out to 90 degrees if one so desires (not the most practical setting, but it can be done). 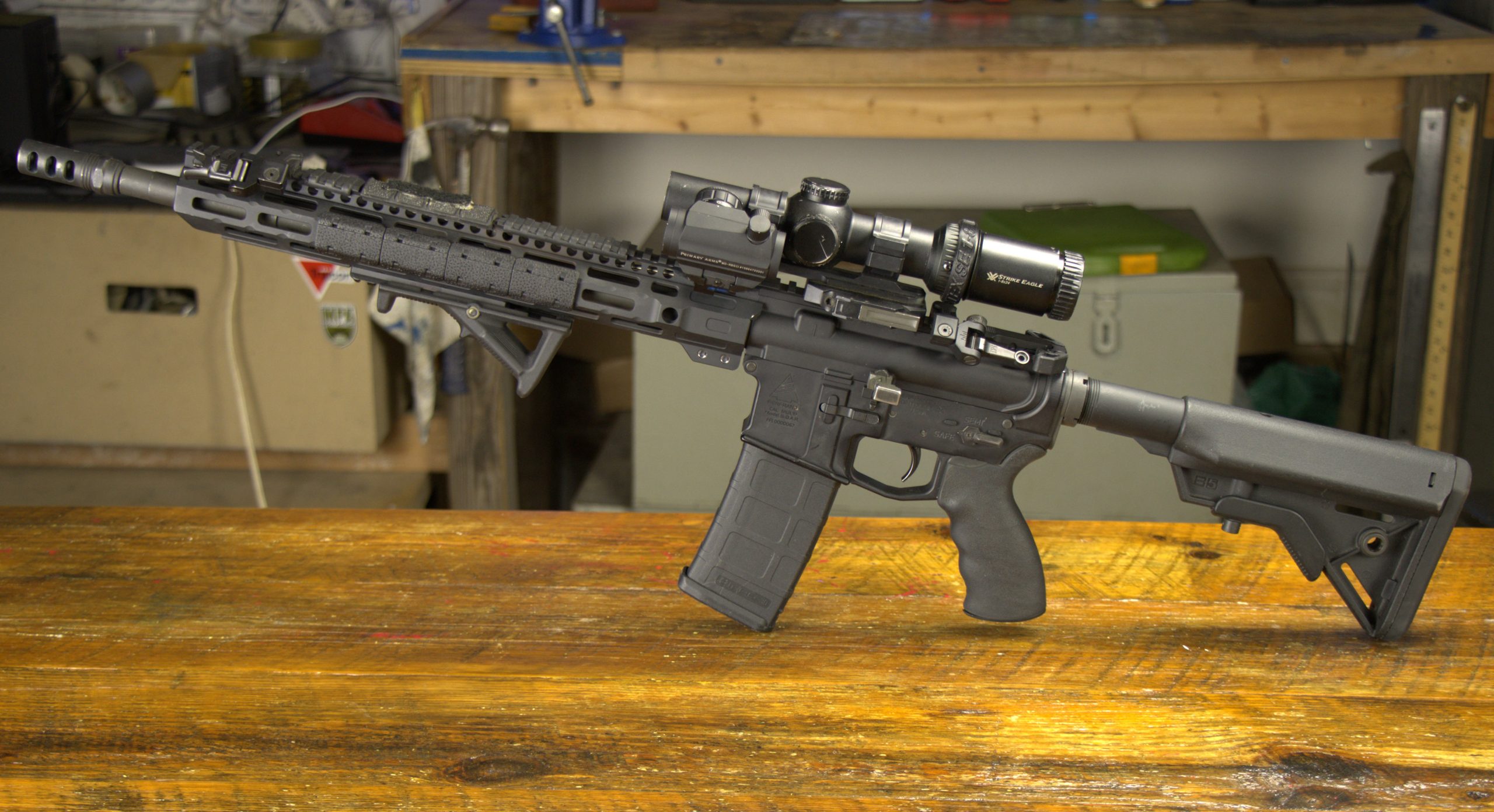 How does it work?

Instead of a solid arm angling the optic off to the side, the arm on the AOM is a separate piece connected via a screw to the base. This allows one to adjust it to a desired angle of offset, and then tighten it down, fixing it in place. Additionally, before the final offset angle is established, the distance the optic sits up off the rifle can be adjusted (up to about 1/2in of adjustment). Then, once one finds the optimum offset angle and optic height, it’s recommended that the adjustment screw be locked in place via thread locker.

So, while it’s not designed to be adjusted on the fly, being able to set it to a customizable angle gives it an advantage over traditional offset mounts with a fixed offset, as it allows the user to optimize the offset for the fastest transition from the primary top receiver mounted optic (typically a low-powered variable optic) to a red dot on the AOM. So, instead of settling for a fixed offset that requires extra training to get used to, using the AOM, one can set the angle in a position that offers the most natural angle, which in turn enables the fastest sight pick-up by the shooter. 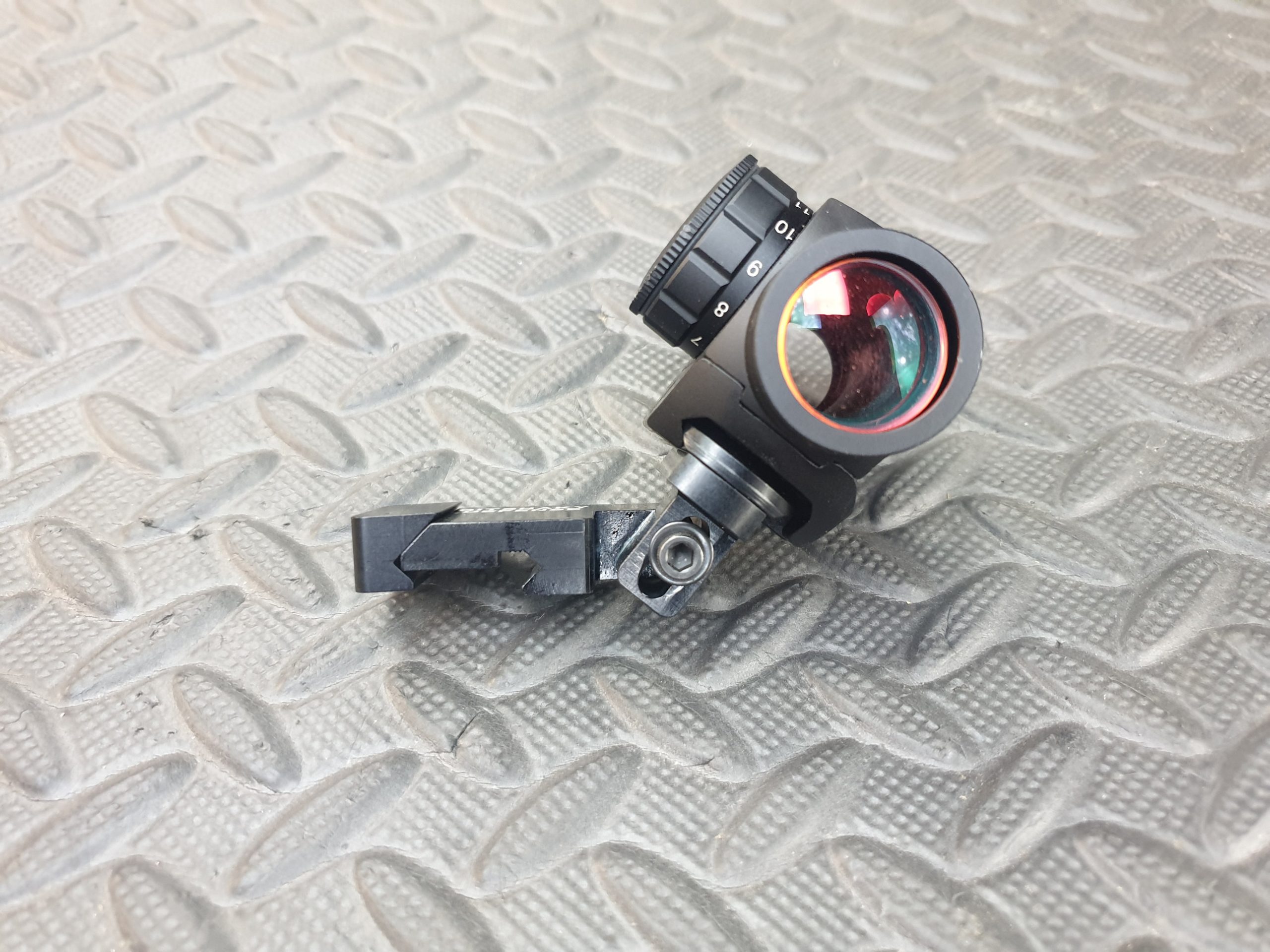 Close-up of tension screw and the adjustable arm of the AOM. 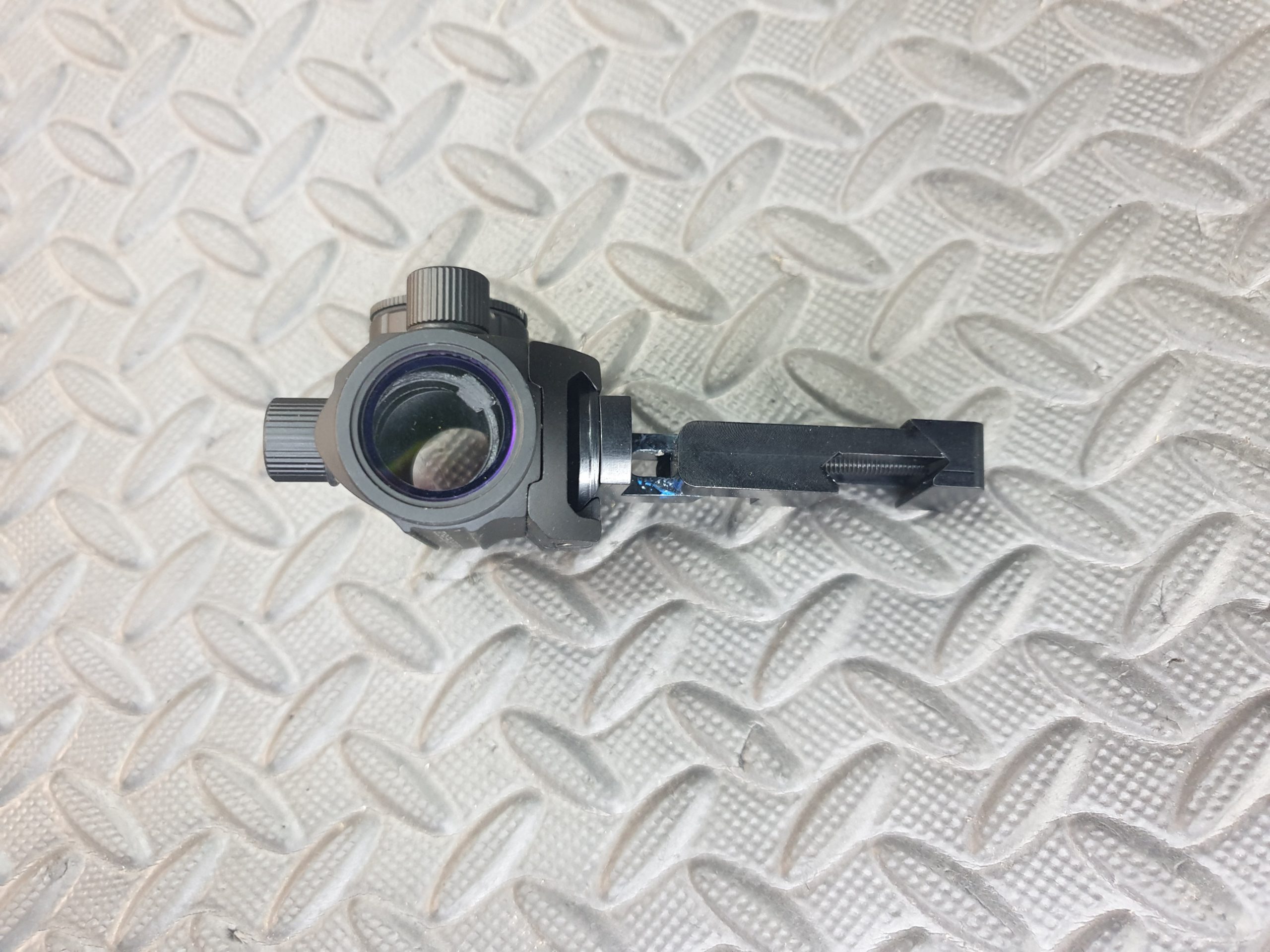 AOM can be adjusted to 90-degrees, and beyond, if one desires so.

Initially, I told the owner/designer Boaz ItsHaky I’d take a month to try the AOM and review it. But, due to a lot of things on my plate–and frankly just plain being behind in my writing–I’ve had it almost four months now. The good thing, though, is I can now say that instead of running and gunning with it for just a month, I’ve actually been shooting with it for several months now. This extended time period has answered the one concern I had with this mount: Does the tension screw and thread locker keep it in place at the set angle?

The answer, I’m happy to say, is: It has. After I found the perfect angle, I screwed the AOM down, and applied a little blue thread locker. I then marked it with a paint marker to see if it moves at all. After months of shooting with it, it’s held firm, staying at the initial angle at which it was set (about 40-degrees). Now, when first looking at the design, I did ask, why not bevel some teeth into the mount so one could sort of ratchet it down once it was set at a desired angle? Mechanically, this would be firmer, but it would also be less adjustable.

As Mr. ItsHaky explained to me, “the intent was to maximize adjustability. Beveling in detents would lead to a loss of some of its finite adjustability.” Additionally, it wasn’t intended to be adjusted on the fly, but rather to be set at the optimum angle for the user, and then tighten it down via the tension screw and thread locker to ensure it stays in place.

So, how did mine hold up? During the four months I’ve had the AOM, there’s been zero movement. This included dropping the rifle on tables and the ground at about a foot or so distance during transitions to pistol. When transitioning to pistol in 3-Gun style matches, you discard the rifle by slinging it and rolling it around out of the way. So, during my range sessions, I wanted to use it the same way I would in matches. This included deliberately throwing it down hard on tables on the offset optic side, just to ensure it could take the abuse…which it did. 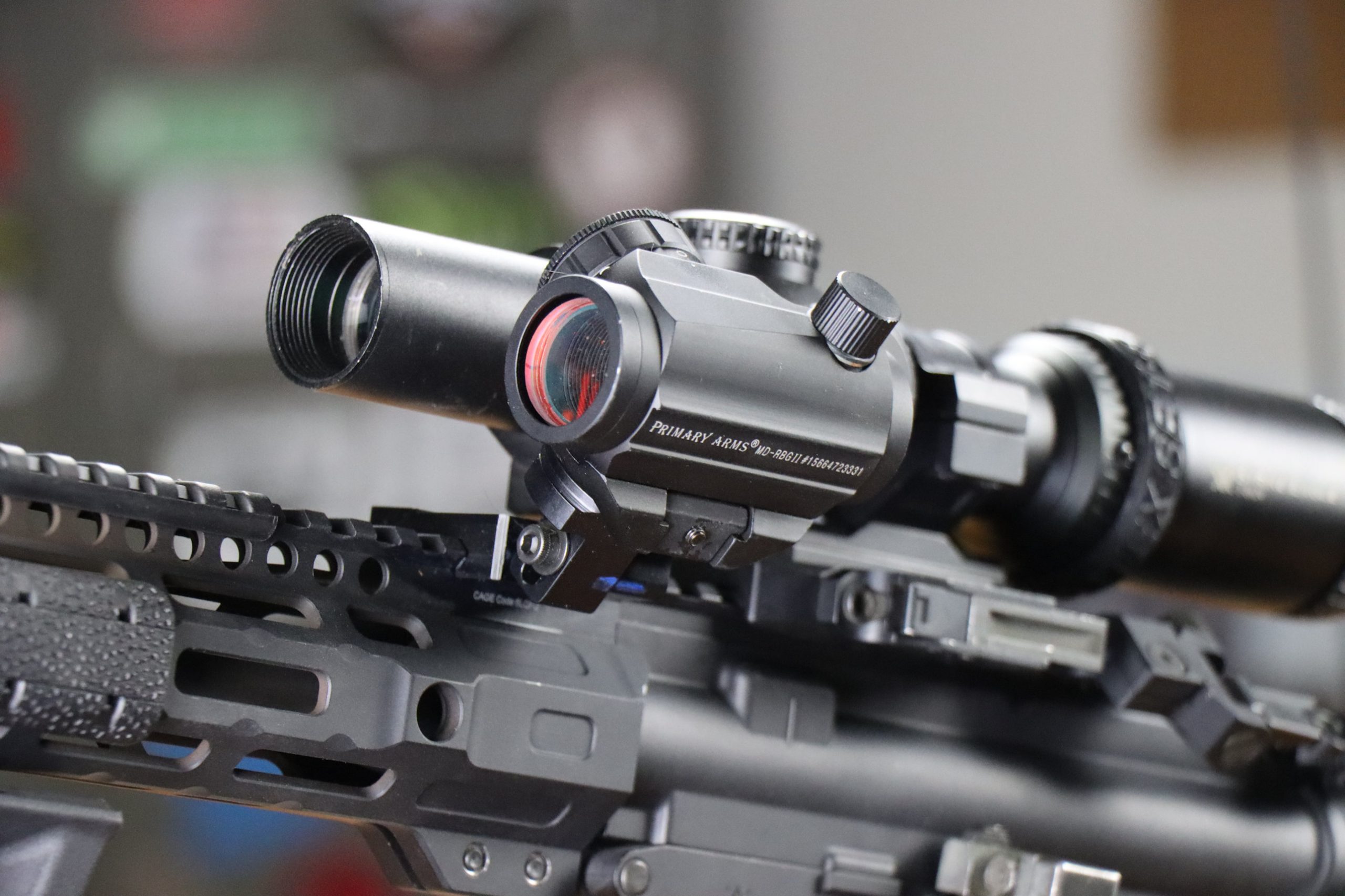 As a lefty, I mounted it onthe left side of the rifle, setting the Micro Dot to about a 40-degree angle. This made for a very fast visual pick-up of the optic when transitioning from the Vortex 1-8 to the Primary Arms Micro Dot. Note blue paint marker line to check for any movement, of which there was none.

The Bitshaky Defense AOM attaches to a MIL-STD-1913 “Picatinny” rail mount, and optics are attached via the Picatinny rail on the mount. It can be mounted to accommodate left and right-handed shooters. There’ll also be a version coming out with an optic guard that’ll be adjustable for the size of the optic. And, you’ll be able to flip it around to the left or right side. Having used a mini-red dot in an offset mount for three tours in Afghanistan, I think some sort of guard or protective wings are a requirement on an offset mount, since the optic tends to take a lot of abuse (and more so than a traditional mounted optic). 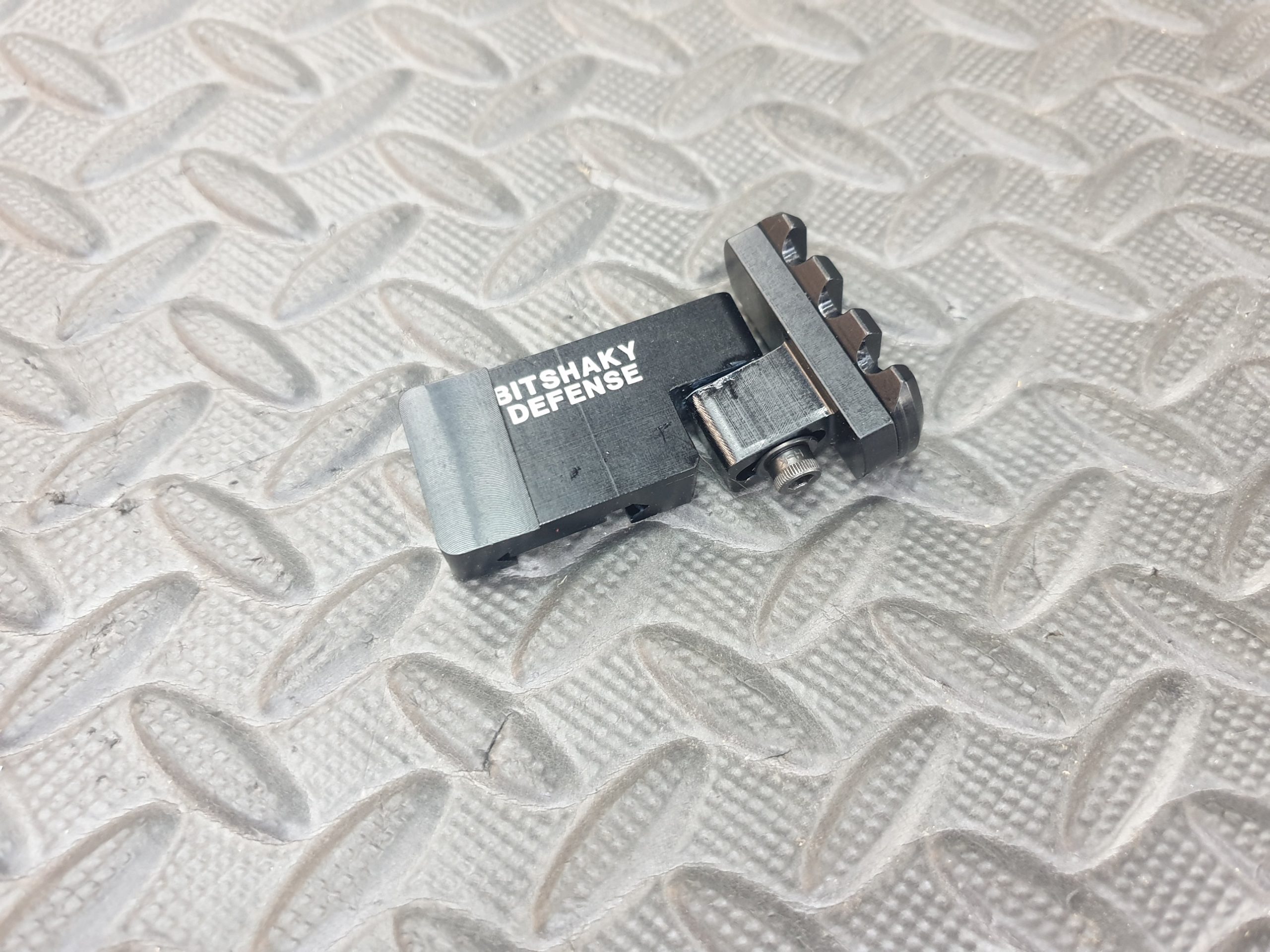 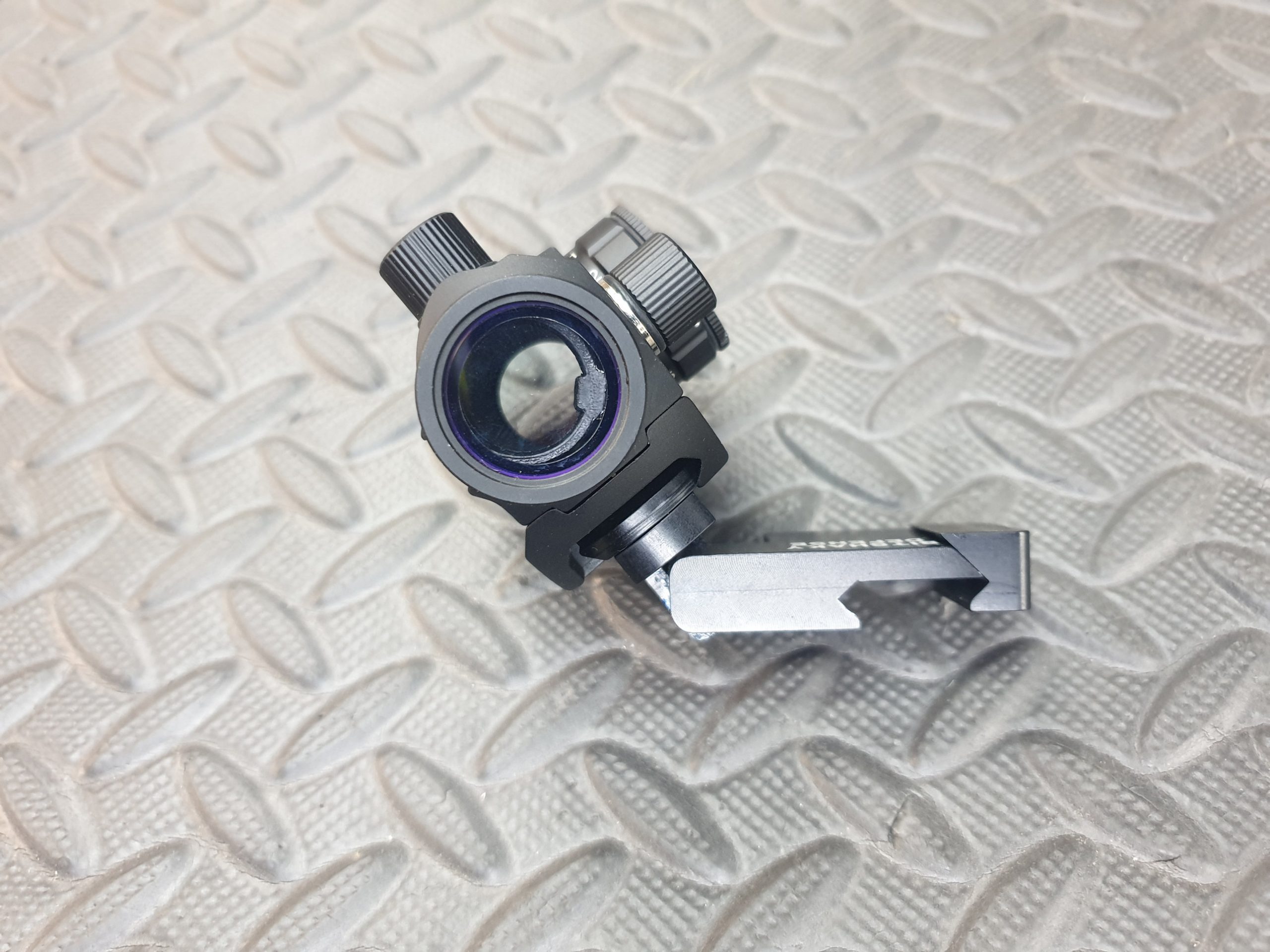 Close-up of the angle it was set at for shooting, It held firm for the entire testing period (almost four months), which included intentionally setting the rifle down hard on the ground, and on hard surfaces on the offset optic side.

Since the optic is basically sticking off the side of the gun, it tends to get banged around a lot more when putting the rifle down, particularly in a dynamic combat environment like Afghanistan. It’s not a matter of IF one is going to trip and fall on patrol, it’s a matter of WHEN, and HOW MANY times. So, whatever optic you have mounted needs to have some sort of protection. 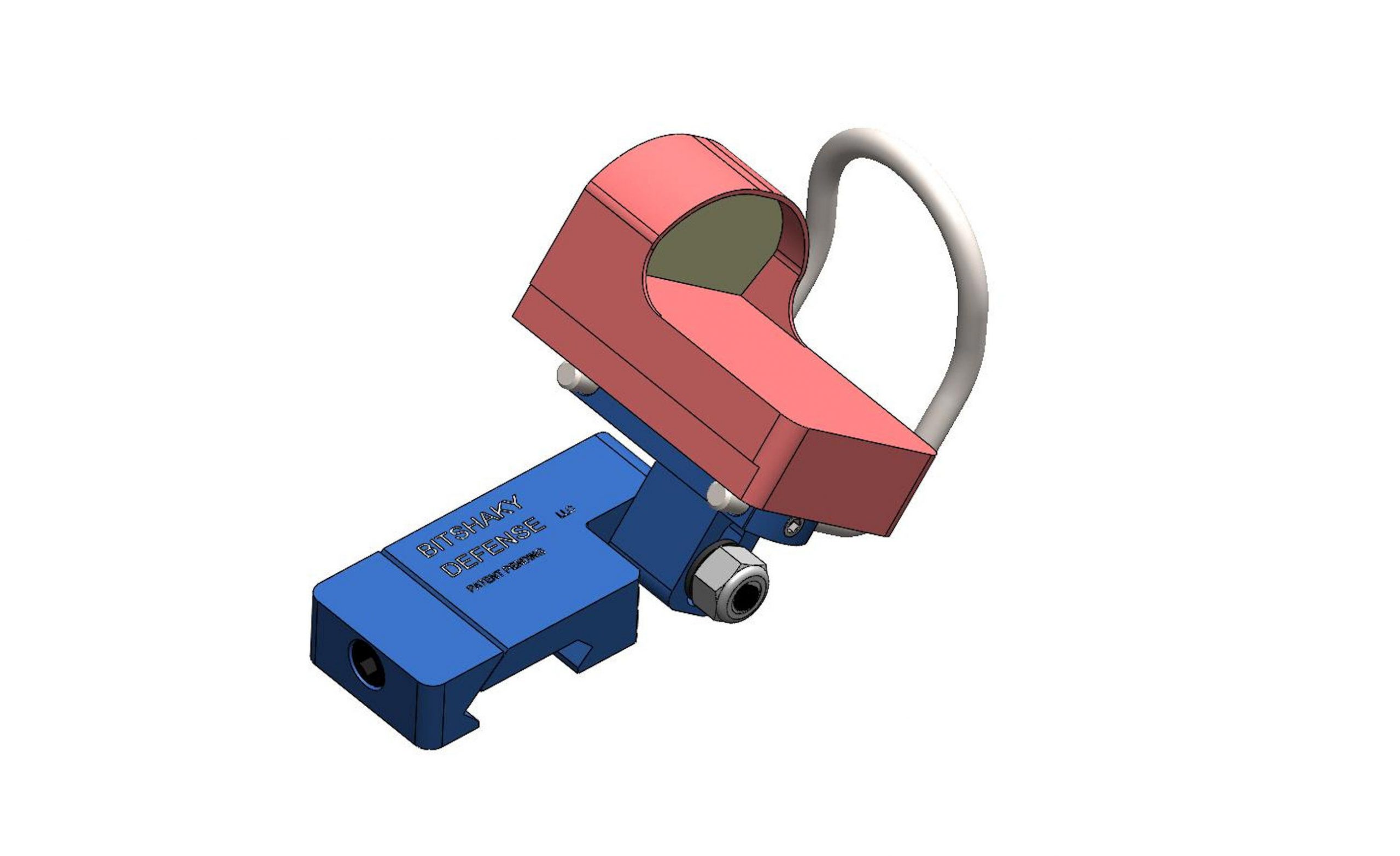 A version with an adjustable guard to protect the optic is on the way. The guard can be switched to either side, and will be able to be adjusted for the width of the optic. 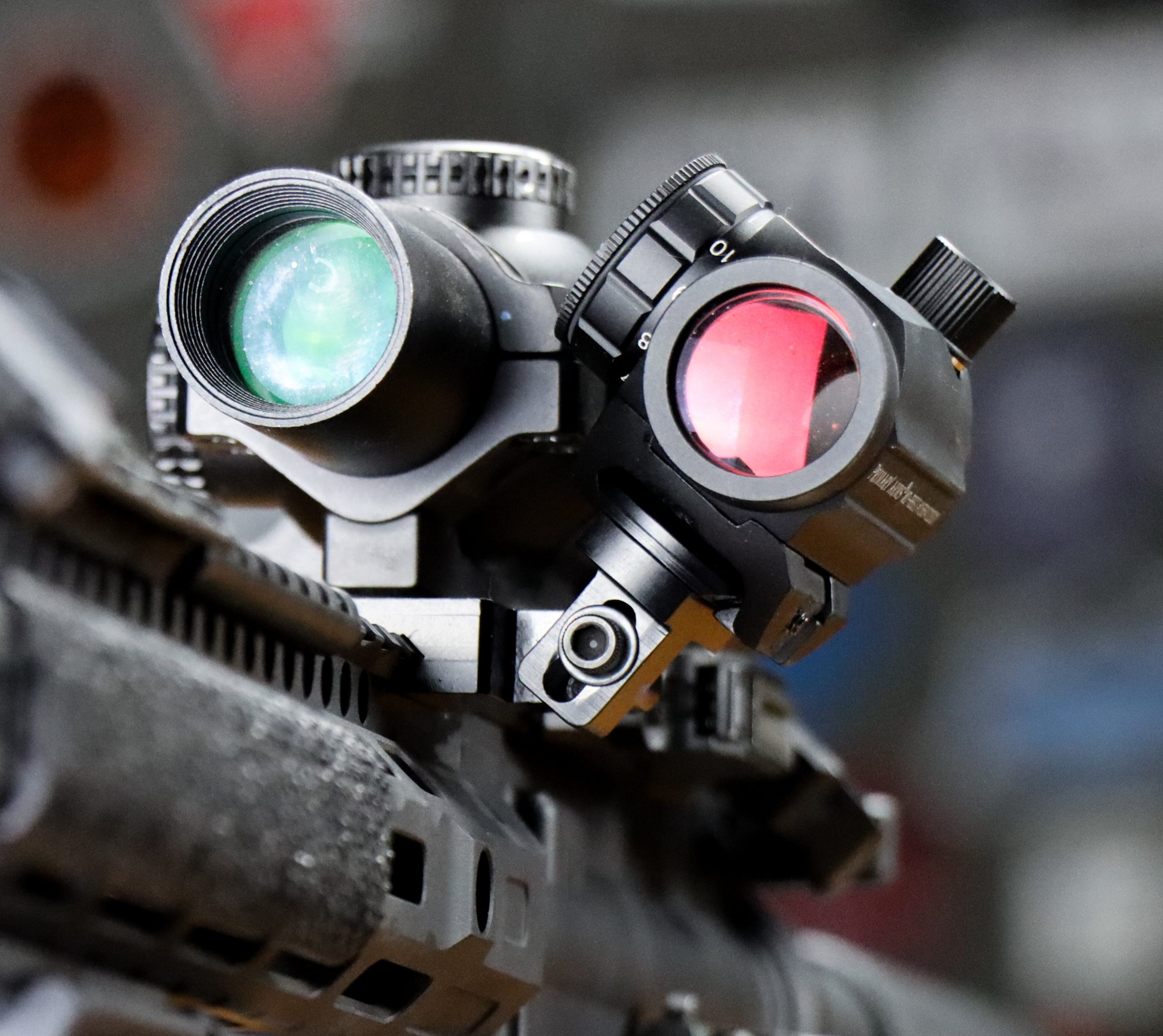 Close-up of AOM, set up for me, a lefty.

Just when you think there is no more innovation left, and nothing new, along comes something completely game-changing. Dual optic rifles (an LPVO and a mini-red dot in offset mount) have become the go-to set-up for a lot of military, special operations, and law enforcement personnel. With the Bitshaky Defense AOM, the next evolution is here, allowing you to customize the offset and height of the optic. This offers an advantage over traditional fixed offset mounts, and allows for faster indexing of the optic by the shooter. Since both speed and accuracy are needed to win gunfights and matches, I think any item that can facilitate this is something worth looking at. Such is the case with the AOM. Adjustability equals speed. 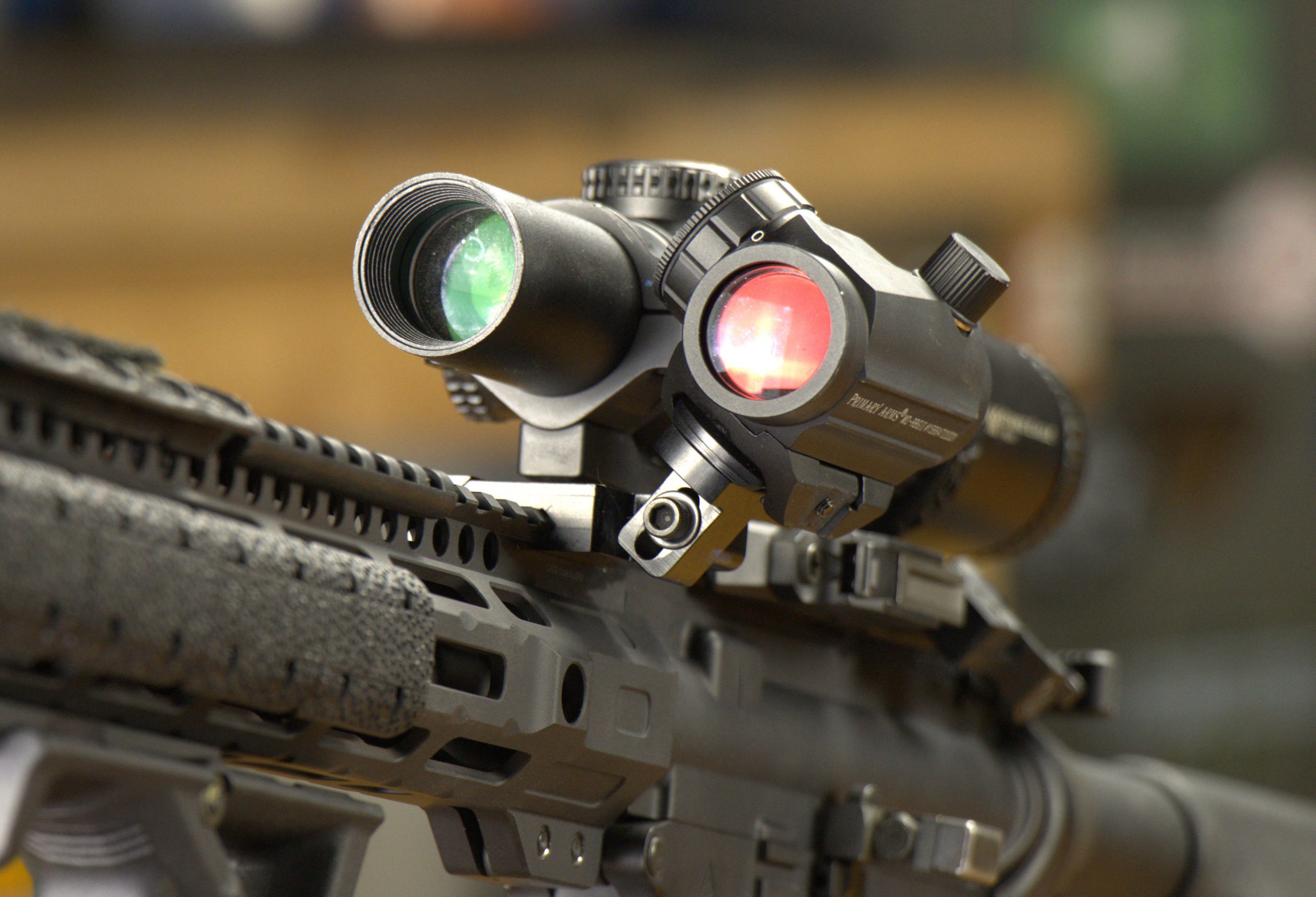 © Copyright 2022 DefenseReview.com (DR) and Jeff Gurwitch. All rights reserved. This material may not be published, broadcast, rewritten or redistributed without receiving permission and providing proper credit and appropriate links.

Trijicon VCOG 1–8×28 Riflescope Commercial SCO (Squad Common Optic) for CQB and Whatever the Combat Distance Be (within Reason)!

David Crane started publishing online in 2001. Since that time, governments, military organizations, Special Operators (i.e. professional trigger pullers), agencies, and civilian tactical shooters the world over have come to depend on Defense Review as the authoritative source of news and information on "the latest and greatest" in the field of military defense and tactical technology and hardware, including tactical firearms, ammunition, equipment, gear, and training.
Previous Pulsar Proton FXQ30 Thermal Imaging Front Attachment Kit: Instantly Turns Your Daytime Combat/Tactical Rifle Scope into a Thermal/IR (Infrared) Scope!
Next Can a Rocket Artillery/Missile Division Really Revolutionize Infantry and Maneuver Warfare?