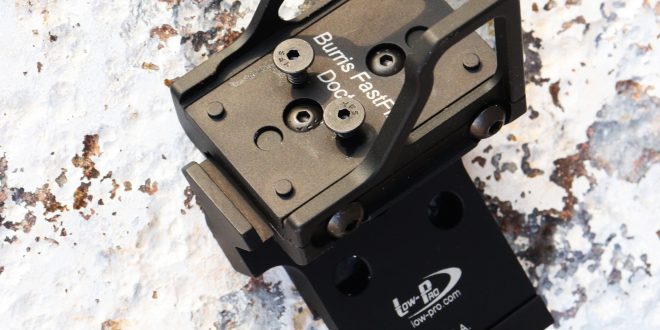 Since the mid-2000s, the US military’s been searching for the perfect close/far optic combination. Around 2005-ish, the first attempt at this I saw was a red dot (Docter sight) piggyback-mounted on top of an ACOG. Then, in 2008 with the issue of SOPMOD Block II, everyone in Special Forces was issued an Elcan (SU-230) 1×4 optic with the same Docter mini red dot on top. To be honest, I was never a fan of this setup–too much height above bore, plus, it’s not the fastest or stable of setups, because you must lift your head up to find the dot. Not optimal.

My solution? Since 2011, I’ve been running a mini red dot in a 45-degree offset mount, instead of piggybacked. Using a 45-degree offset’s not only faster, but also more stable, because it basically puts the red dot next to your primary optic to use it quickly. One just needs to roll the rifle, turning it in towards your support arm, all the while maintaining the same cheek to stock contact. There’s no need to lift one’s head up off the stock to find it. It’s just a better way to go. 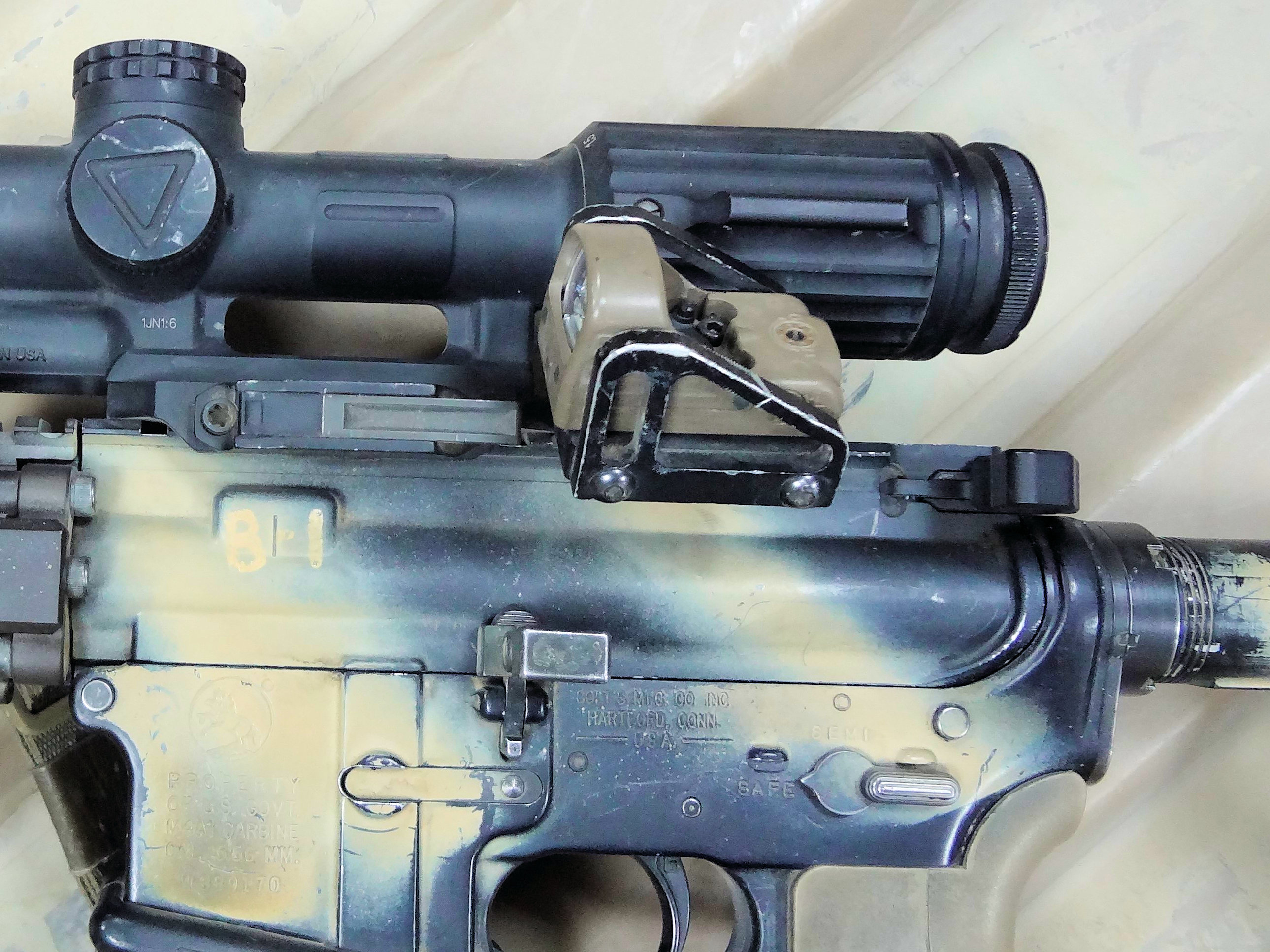 If you look at the marks on the protective wings on this Predator offset mount, they’ve taken a beating. Had they not been there, I’m sure I would’ve gone through several mini red dots during my three Afghanistan deployments. Instead, I never had an optic go down from being damaged by a fall or rough handling.

The AMS Machine MRD (Mini Red Dot) Mount is essentially a two-piece unit, the Extended 45-degree Accessory Rail, which is a section of picatinny rail, and the MRD mount itself that attaches to it and holds the optic. The idea is you can order both is needed, or just one, depending on the optic you plan on running. For optics with low mount brackets such as Aimpoint T1s, Primary Arms, and Holosun Micro Dots, you only need the AMS Machine Extended 45-degree Accessory Rail. 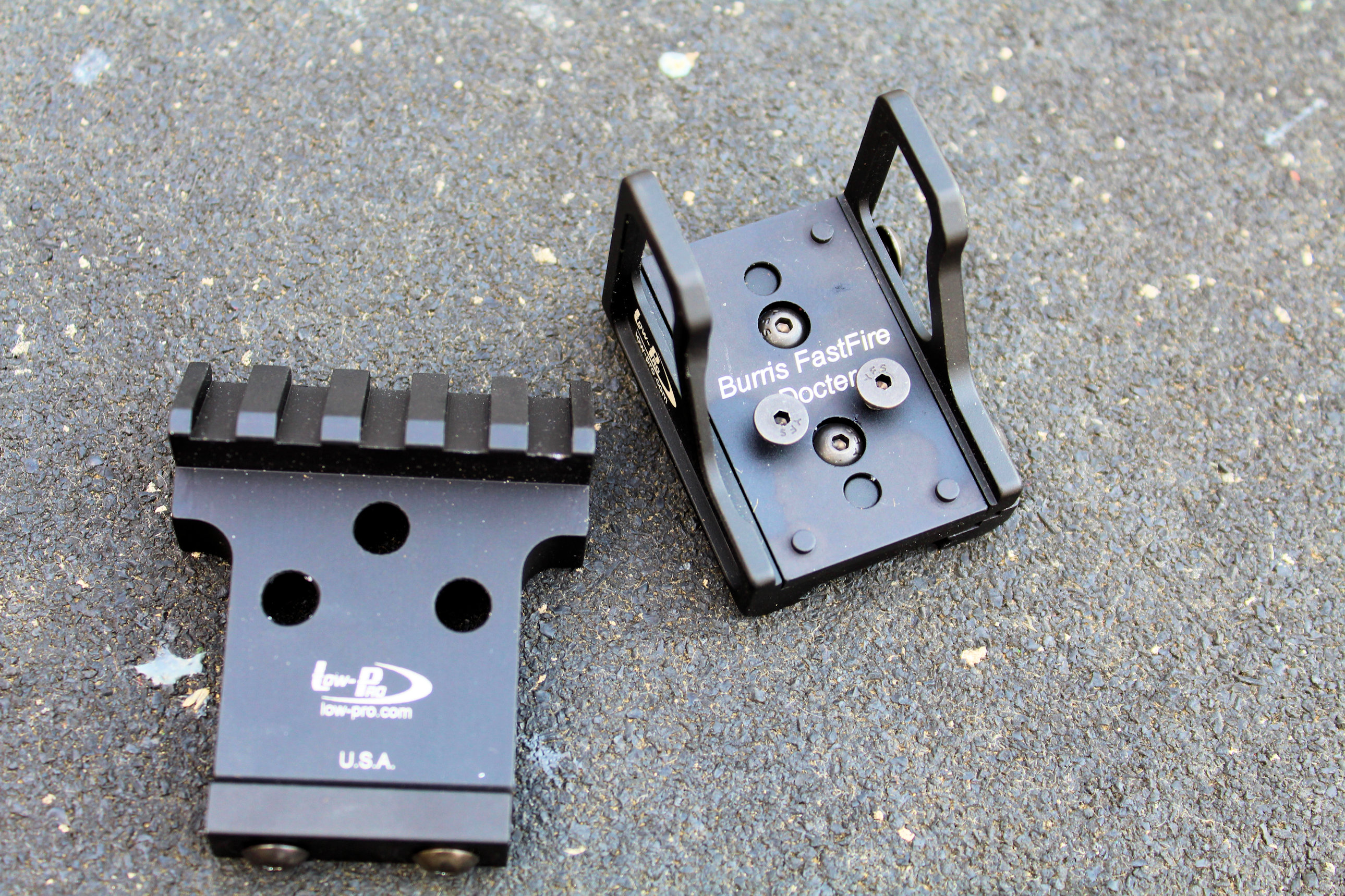 Since all your open-style mini red dots such as Burris Fast Fires, JPoints, and Docters, require an MRD mount, the AMS Machine MRD Mount is exactly the item I was searching for, a mini-red dot mount with protective wings. Why my insistence on protective wings? Because they keep the mini-red dot sight safe from bumps and scratches, a necessity if you plan to use one in a combat zone, especially places like Afghanistan.
As every soldier who’s ever gone outside the wire on patrol knows, it’s not if you are going to trip and fall, it’s when, and how many times. So, having wings protecting the optic is a necessity, because there’s a good chance the rifle is going to be dropped or fallen upon. One time, while on a mission in Uruzgan province, Afghanistan, I fell forward so hard (landing with my rifle between me and thee rocky ground), that even though I bent one of the wings so bad on the offset mount that I had to bang it back flat with a hammer after the mission was completed, the Eotech MRDS with plastic body survived just fine. 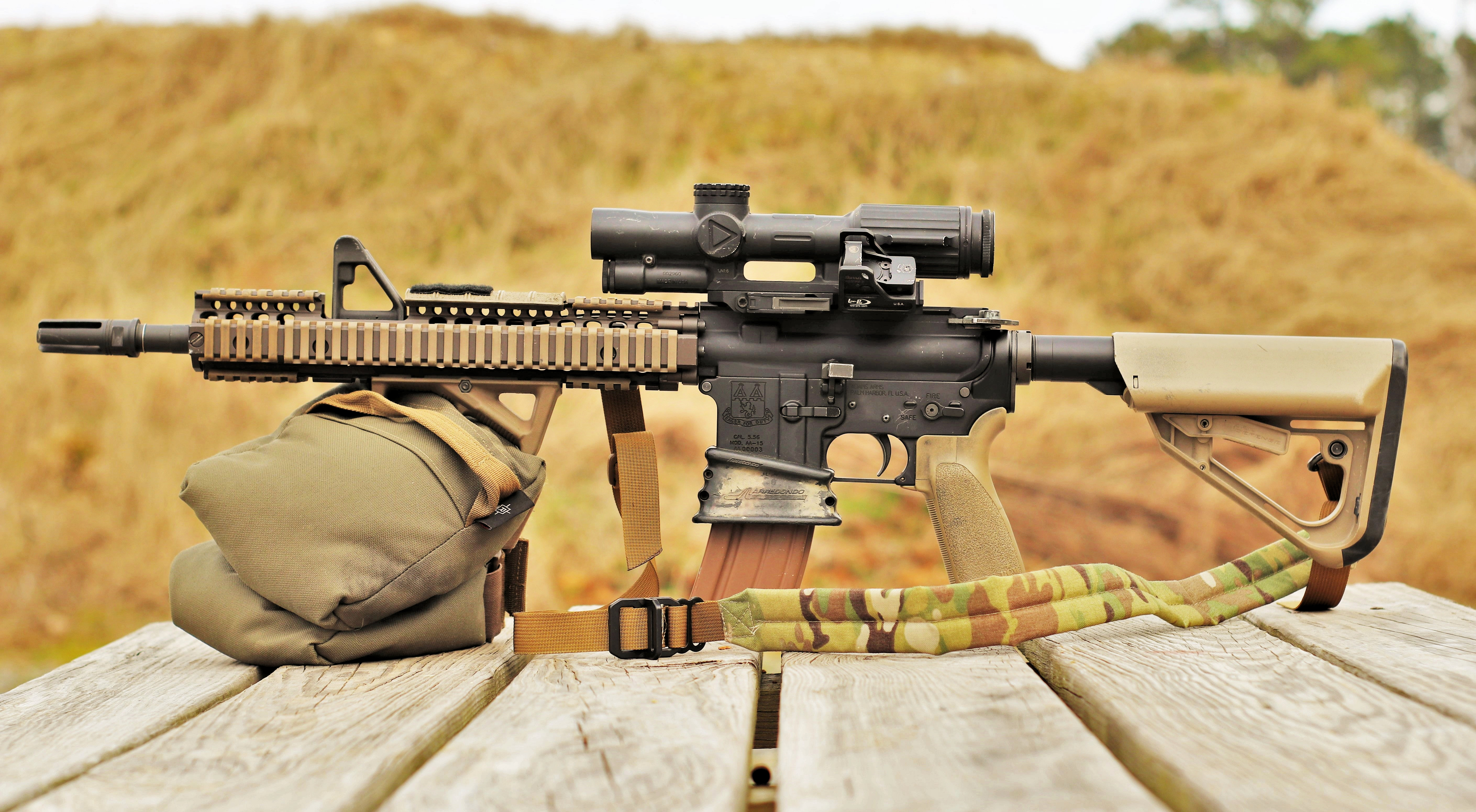 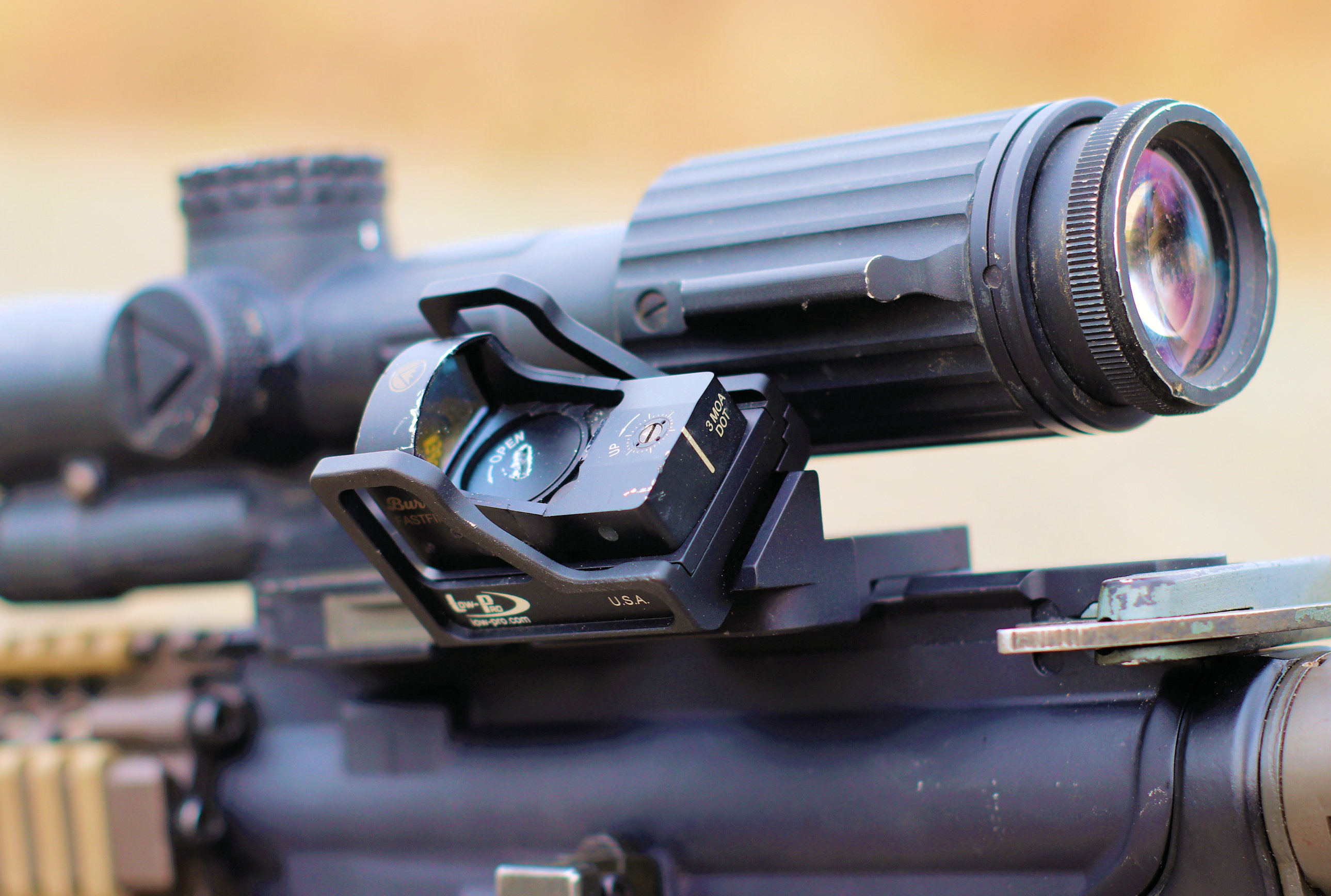 MRD with Burris Fast Fire II, mounted behind the scope. I find this to be the ideal position for the fastest acquisition of the red dot.

It’s a safe bet that had the mount not have had protective wings, the Eotech MRDS would’ve shattered into a million pieces. And, it’s not just falls and drops with the rifle that pose a risk to damaging unprotected min-red dots. Just having the rifle in a military vehicle is hard on optics. If you have never seen inside an armored truck like a MATV or RG31 (two of the main mine/IED resistant vehicles used in Afghanistan), let me tell you, there are zero soft or padded places to stow a rifle. The only padding in those trucks are the seats. The rest? Nothing but hard metal surfaces everywhere. That means that on a two to three hour drive over rocky terrain, unless you are physically holding onto your rifle the whole time, it’s GOING to get banged around quite a bit. No protective wings on an offset dot means there’s a very good chance it’s going to get dinged up sooner or later.
This is the main reason I’m such a proponent of AMS Machine’s MRD mount. It’s built to protect whatever optic is mounted on it. I should also point out that the machining work is outstanding. Now, granted, it’s made out of aluminum, so it’s not adding that much weight to a rifle, but AMS still went ahead and removed metal wherever they could to reduce the weight, but not compromise durability. A side benefit is tha it also gives the MRD a cooler look. 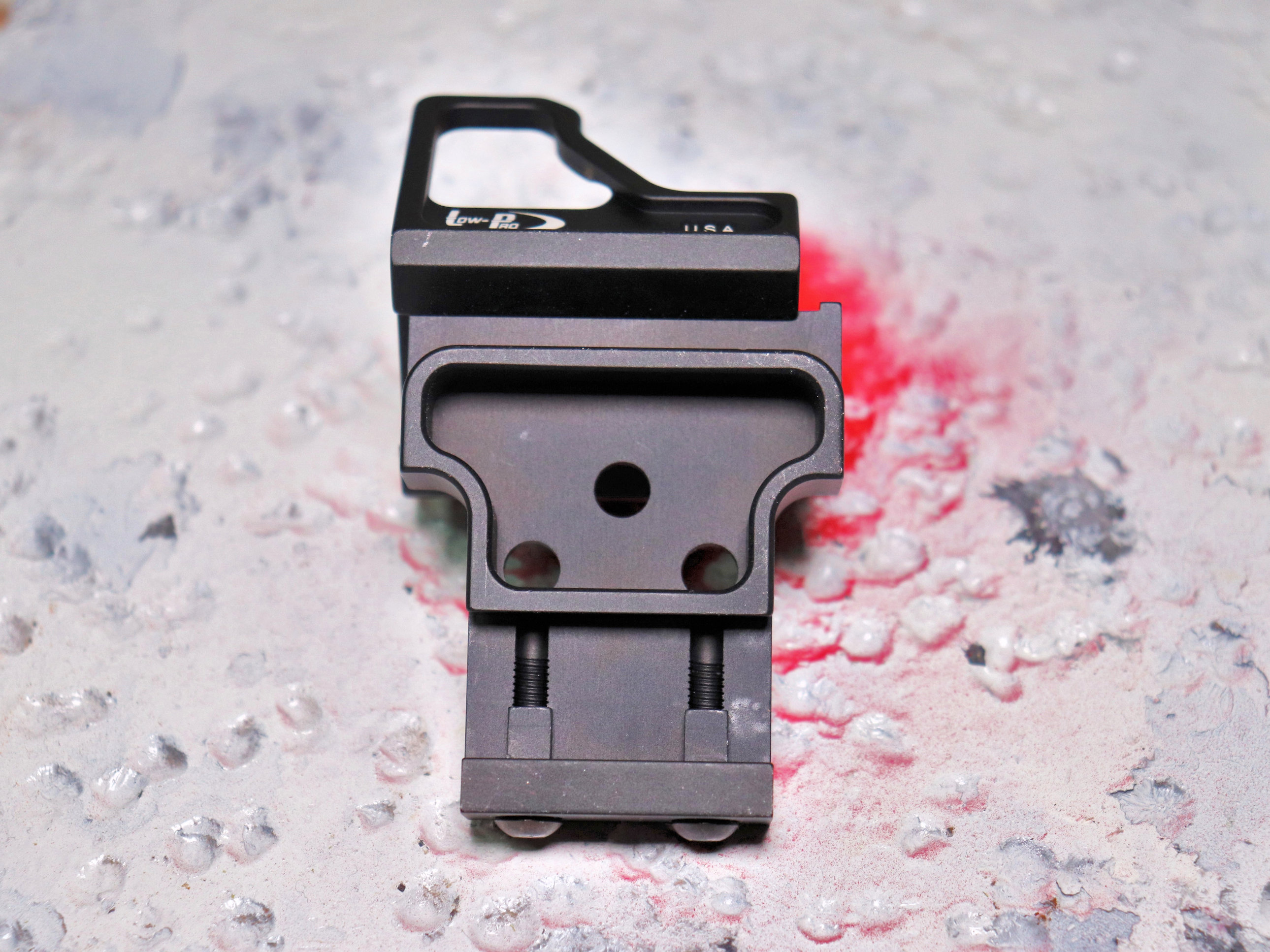 Underside of Extended Accessory Rail, not the machine work and holes drilled to take out as much weight as possible. 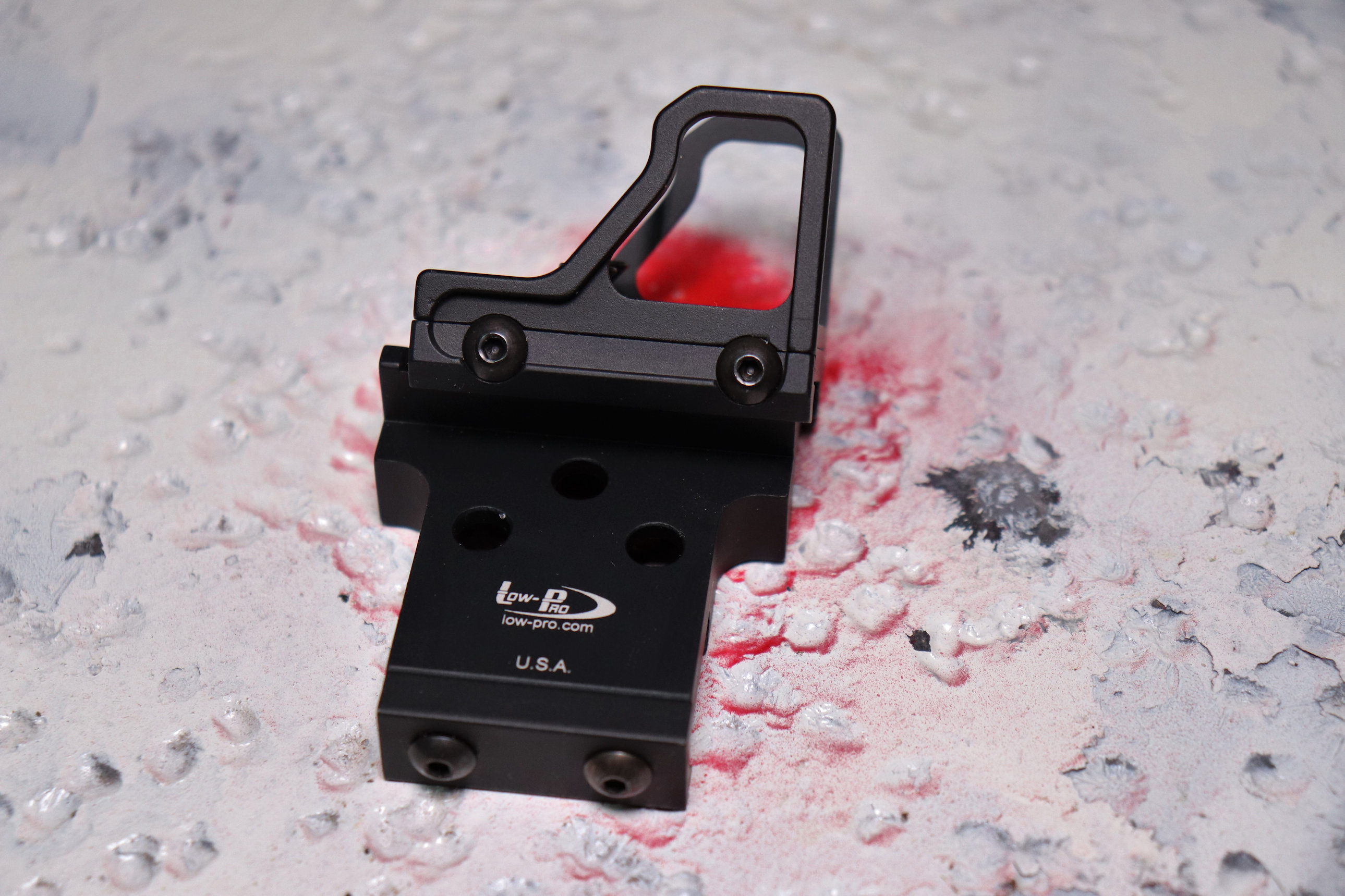 Close up of protective wings, great attention to detail.

So, aside from protecting the optic and being very durable, just how well does the AMS Machine MRD Mount perform as a 45-degree offset mount? In short, fantastic! Now, I must admit that, at first, I had a little trouble picking up the dot as smoothly as I do using a Predator Offset mount. That’s because the MRD Mount sits slightly higher up due to being mounted on top of the Extended Accessory Rail. Turns out, this is actually a good thing.

What I hadn’t realized before when using the Predator mount was that I was actually dropping my head slightly to find the dot. When I rolled the gun over from primary optic to the offset optic, I was dropping my head/eyes about half an inch to get behind the optic. With AMS Machine’s MRD Mount, there’s no need for that because it sits up slightly higher. So, once I got used to it, I realized it’s actually better and faster, since now the only movement required to employ the mini-red dot Is to just roll the gun slightly inward. 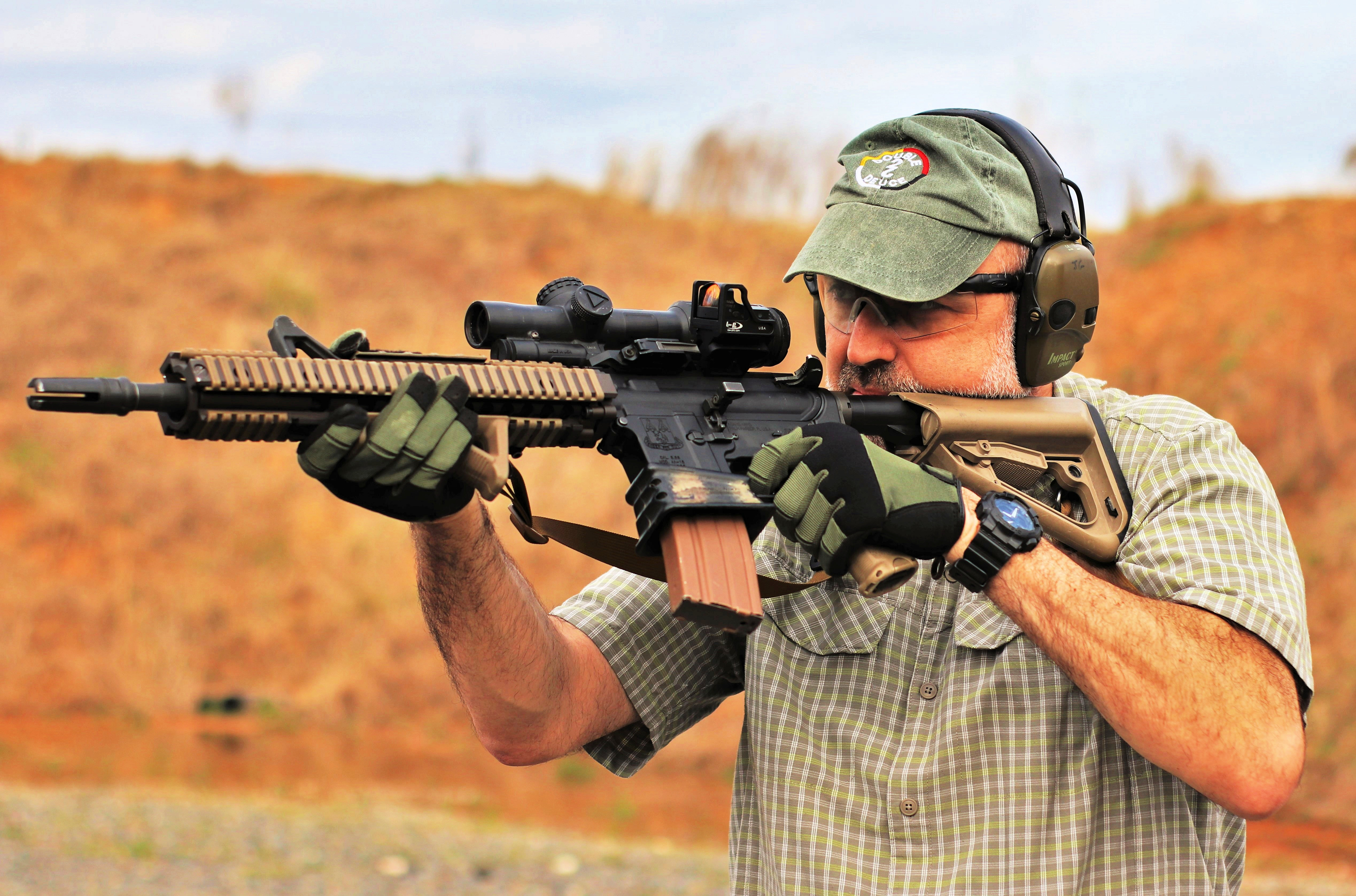 The offset MRD is at the perfect height for seamless transition between primary optic and the back up red dot.

The higher mount puts the optic on the same plane as a normal 90-degree top-mounted optic, so there’s no need to change levels between the primary optic and the offset optic. Turns out this is also perfect for the higher 1.75″ mounts for low-powered variable optics (LPVOs) that are becoming more popular, over the classic 1.5″ mounts. The MRD Mount is in a perfect position for minimal head movement required to find the optic. Again, of course, this is a good thing. Less head movement equals, faster, more stable shooting.

So, if you’re looking to match the already countless SOF Operators who employ dual optic M4s equipped with offset mini-red dots and low-powered variable optics, or are needing an offset mount for your 3-Gun rifle to shoot Unlimited or Open division, the AMS Machine MRD Mount is a great choice. It’s also the only acceptable offset mount I’ve found to be worthy of being used on a rifle or carbine meant for going into harm’s way. And, priced right around $150 for both the Extended Accessory Rail AND MRD Mount, it’s a great deal, too. 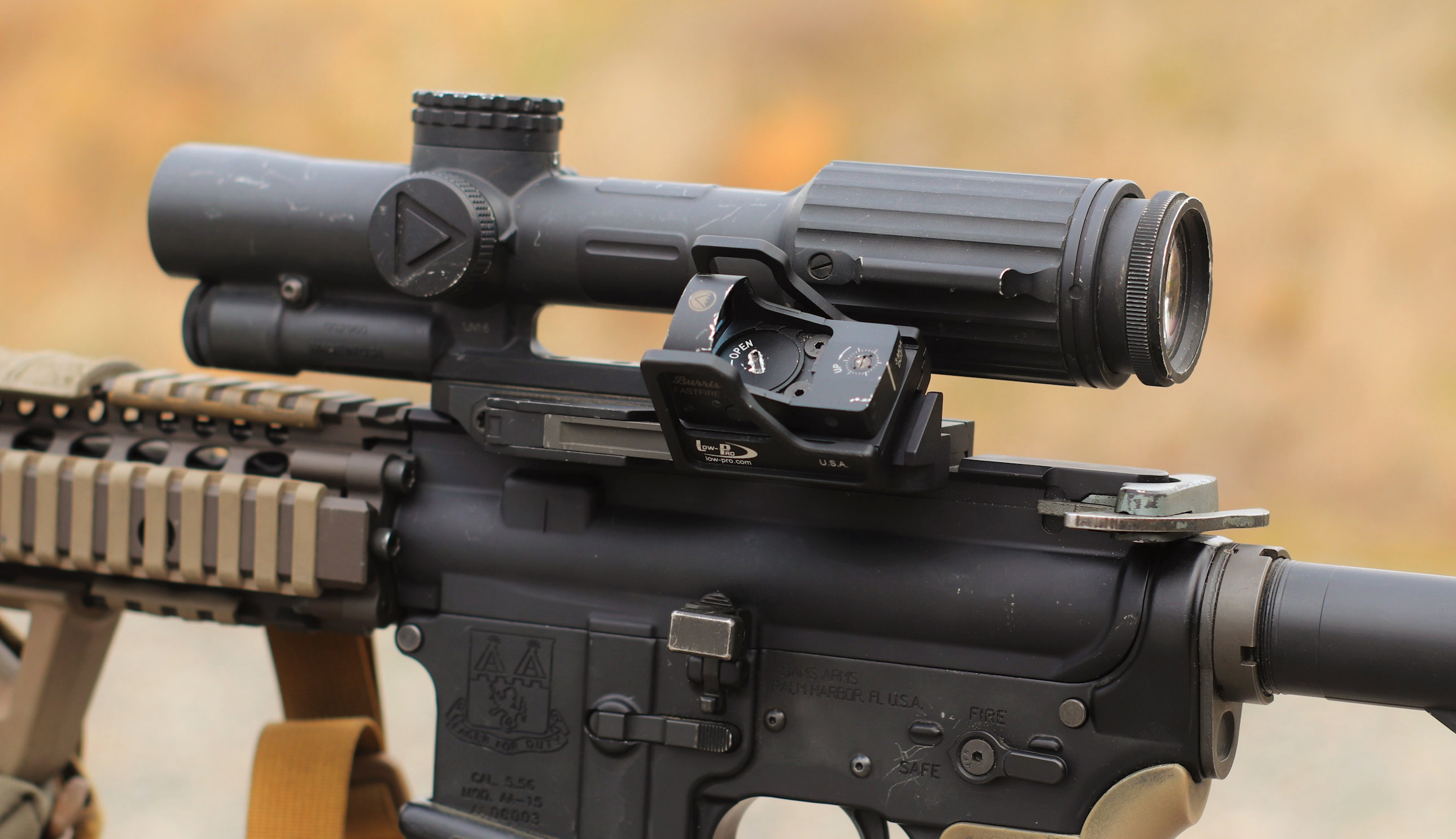 David Crane started publishing online in 2001. Since that time, governments, military organizations, Special Operators (i.e. professional trigger pullers), agencies, and civilian tactical shooters the world over have come to depend on Defense Review as the authoritative source of news and information on "the latest and greatest" in the field of military defense and tactical technology and hardware, including tactical firearms, ammunition, equipment, gear, and training.
Previous Wishing the Very Best for the Families of our Fallen Military Heroes this Memorial Day 2019.
Next Unity Tactical Hot Button-MLOK Remote Pressure Switch for Your Tactical AR-15 Rifle/Carbine/SBR White Light and Laser Aimer/Illuminator! (Video!)