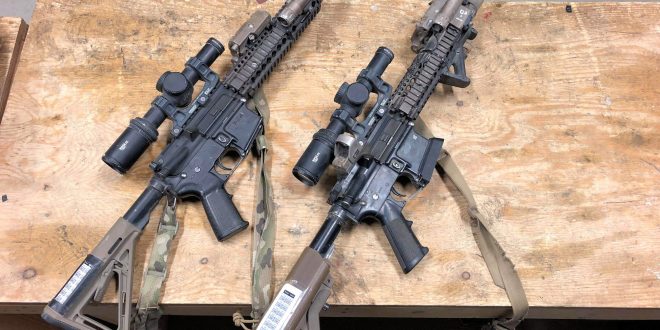 With my retirement from the military back in March of 2017, the thought of being able to do another Competition-to-Combat Crossover article hadn’t really crossed my mind…until recently, that is. Thanks to photos and feedback sent from previous team members of their rifle setups, they’re currently employing overseas as of Fall 2018, I have just enough to present to you: The Competition-to-Combat Crossover Part IV.

If you’ve read my previous articles (parts I through III, see “Related Articles” below), you might have noticed 50% of the carbines being used were Mk18 shorties, most topped with Elcan Specter DR 1×4 optics (Su-230s). In Part III, I mentioned my preference for a 14.5 carbine with a 1-6x variable optic (VCOG), which was much better suited for the average distances (greater than 300 meters) at which I was engaging threats.

While I don’t have as many pictures of the rifle set-ups being employed down range for this piece, one thing is for sure: most of the rifles have the same style of optic combination I’d previously employed during my last tour. As much as I’d like to take credit the for that–the men having learned this from me, that is–I think it’s due to the operators knowing the terrain and how the enemy fights. They’ve set up their rifles based on these factors: terrain and enemy tactics. 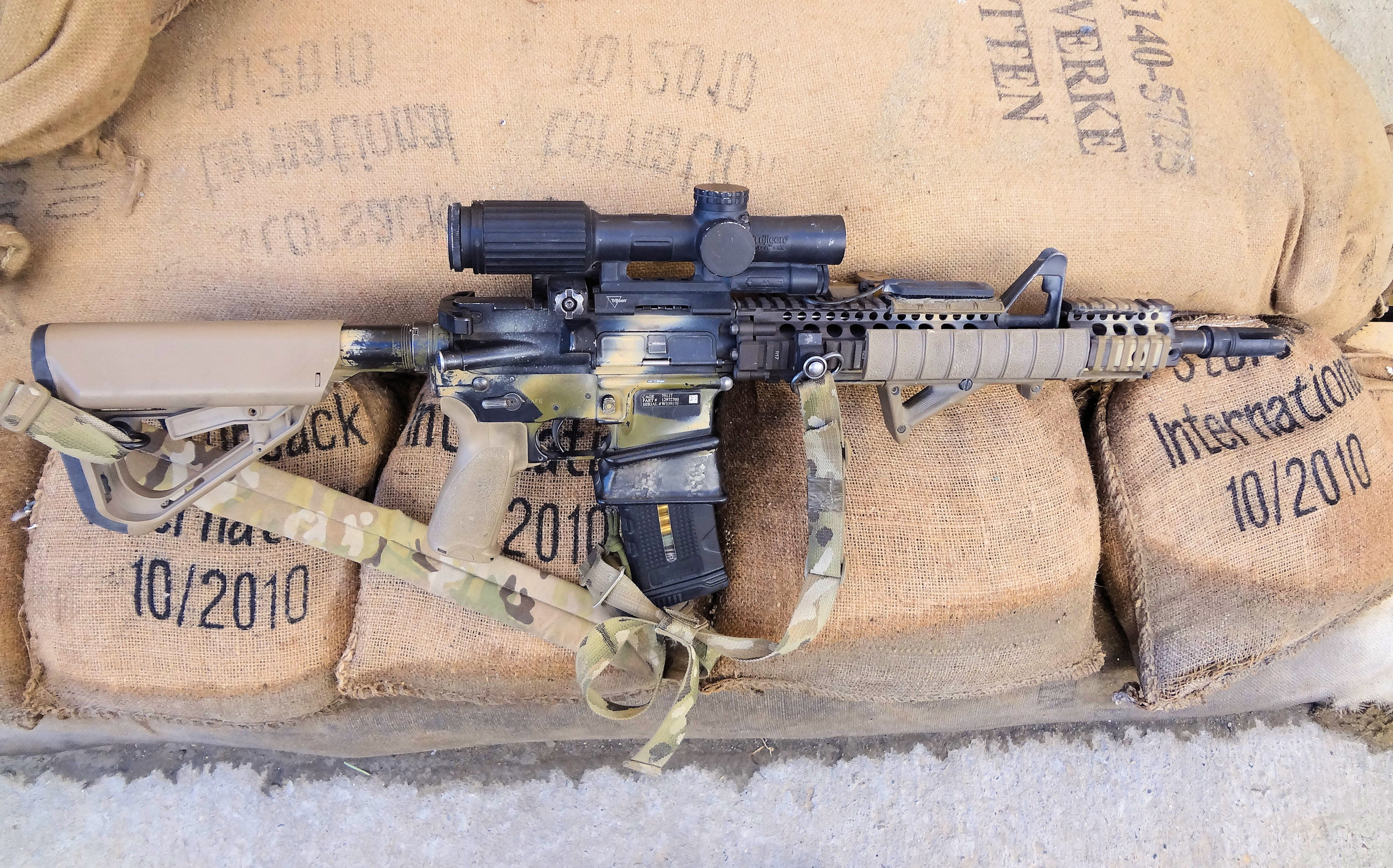 One thing I’d like to point out is that for many of these men, back in 2015 while serving with me (when part III was written), it was their first combat deployment. Now, three years later, these same men are truly seasoned and experienced warriors who all have at least two combat tours under their belt. So, it is with this experience that they’ve learned how to best set up their rifles based on the threats they face.

In Afghanistan, the enemy typically fights from distance, even in the villages. As was the case back in 2015 during village clearance operations, the enemy would always engage us from two or three building away, keeping distance from us. As we moved in to close the distance, they would always retreat, either maintaining a few buildings between us or dispersing to wood lines a few hundred meters from us.

Shooting at us from ridge lines put the average engagement distances for most shots beyond 300 meters. I think we only had three instances where my guys took shots at threats under 100 meters away. Two of those times were at true CQB distance, under 10 meters. The other one was just under 100 meters. The rest of the time it was a long-range fight, always between 300 and 500 meters. So, the rifle packages I’m presenting here are specifically designed for the conditions in which these guys are engaging the enemy. 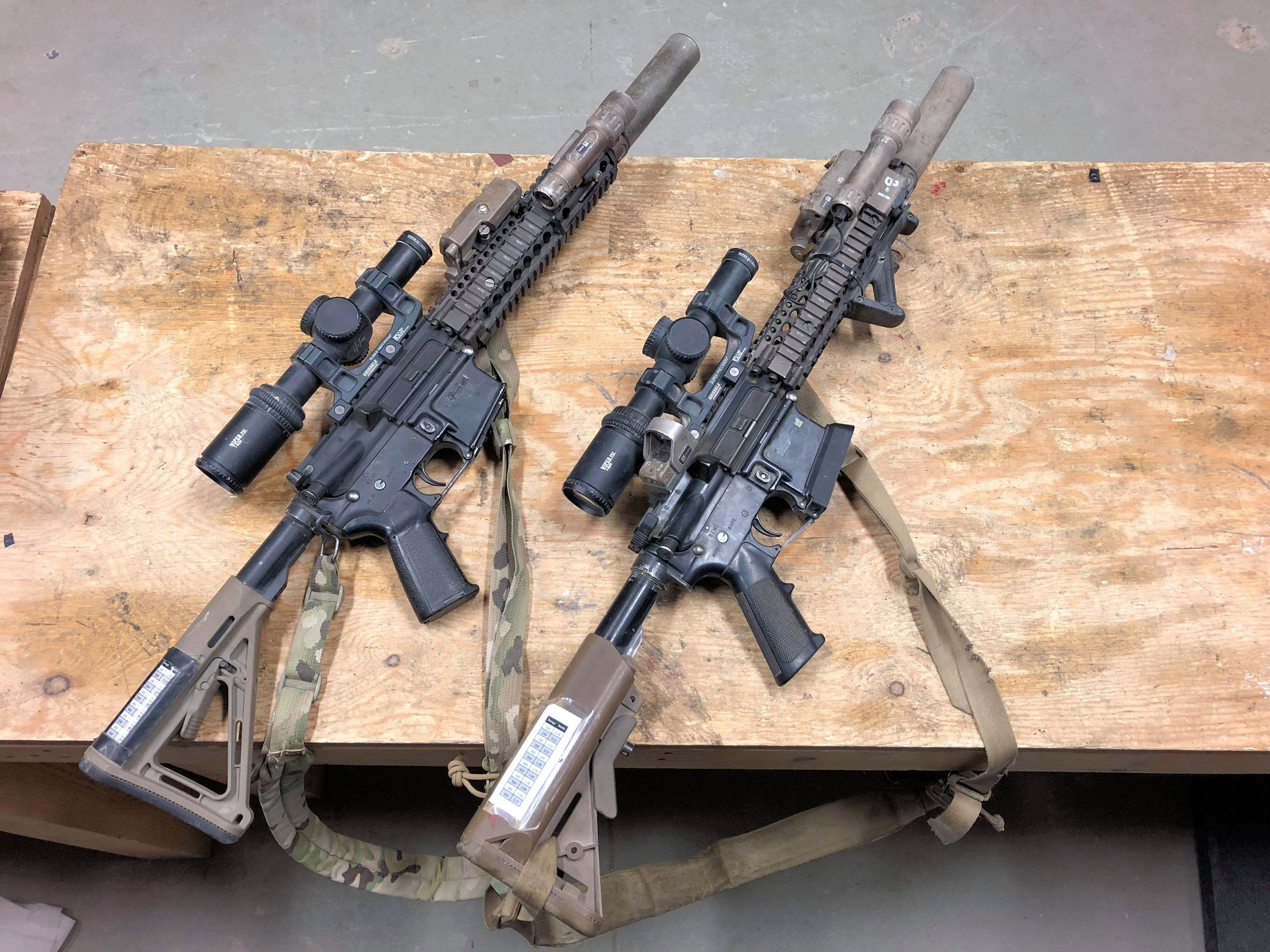 Two M4A1 carbines both with Vortex PST 1×6 scopes, with Geissele mounts. Despite all the press of SOCOM rolling out new URG-I uppers and new scopes, nothing new has hit SF units in mass yet. The scopes were personally/individually purchased, and the Geissele mounts were a unit-purchased item. Nothing new from SOCOM yet. Also, note dope cards for quick reference MIL range holds taped to stocks (buttstocks).

Variable Scope and Dual Optics for the Win!

Unlike my last tour, where almost every rifle had a SU-230 as the primary optic, all these carbines sport some sort of 1×6-power scope. Additionally, many have an offset red dot combat optic as a back-up CQB sight. Looking at the pics, you won’t see any Vortex Razors or Trijicon 1x8s, even though both of those optics have been rumored to have been chosen by SOCOM. The reason for this is simple; all these optics were purchased by the team members.

It was just this year (2018) that SOCOM announced Trijicon and Nightforce 1-8x combat optics have been selected. And, even though Vortex Razors have been purchased by a number of Special Operations units, they haven’t yet become a standard SOCOM-issued item. Looking at these rifles, aside from one Night Force optic, the rest are all Vortex Viper PST Riflecopes in 1-6x or Strike Eagle Riflescopes in 1-6x. Now, I know what you’re thinking: ‘Vortex PST and Strike Eagles…but those are the budget models’!

Indeed, they are Vortex’s lower end offerings compared to their Razor line. So, why were they chosen? Well, price was a factor. Speaking with one former teammate, Vortex offered them a good discount. However, that wasn’t the sole reason for choosing them. Vortex’s lower-end scopes have proven to work very well in shooting competitions like 3-Gun.

Many of my former teammates, while not really hardcore competition shooters, do take part in rifle and 3-Gun matches from time to time. However, because it’s just an occasional thing, many cannot justify spending over a $1,000 on an optic like the Vortex Razor. So, scopes like the Vortex Strike Eagle 1-6x are popular choices for many of the guys for gun matches. I myself own a Vortex Strike Eagle 1×8 optic that I purchased for 3-Gun. See see my review here.

But for combat? Well, despite what many might think of “budget optics”, the bottom line is that if they work well and prove to be reliable, then why not. After using these optics in matches and training, these guys obviously have confidence in them. During my last tour, we had one guy run a Strike Eagle 1-6x. I’ve also seen mid-ranged priced Primary Arms and Burris scopes in the field. If they had the option between a Strike Eagles and Razors being given out, I’m sure they’d all opt for Razors.

But alas, like many civilian shooters, many of these guys are family men, or they have other financial commitments, leaving them only so much money from their paychecks left to spend on gear. While seeing Vortex Strike Eagles being used in combat might make some “tactical experts” gasp in disbelief, the fact is, they’re working well, and have earned the trust of the guys using them down range. 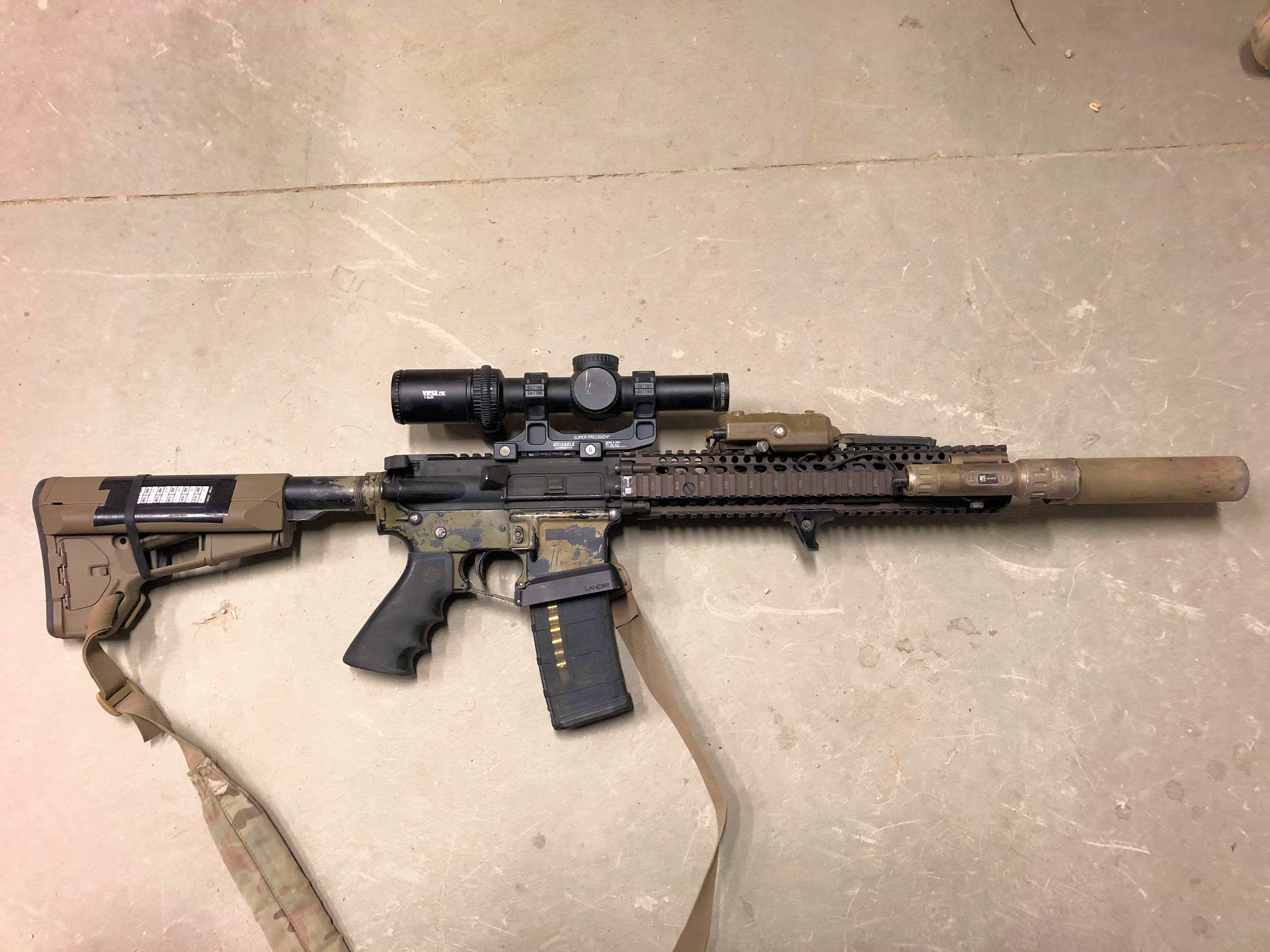 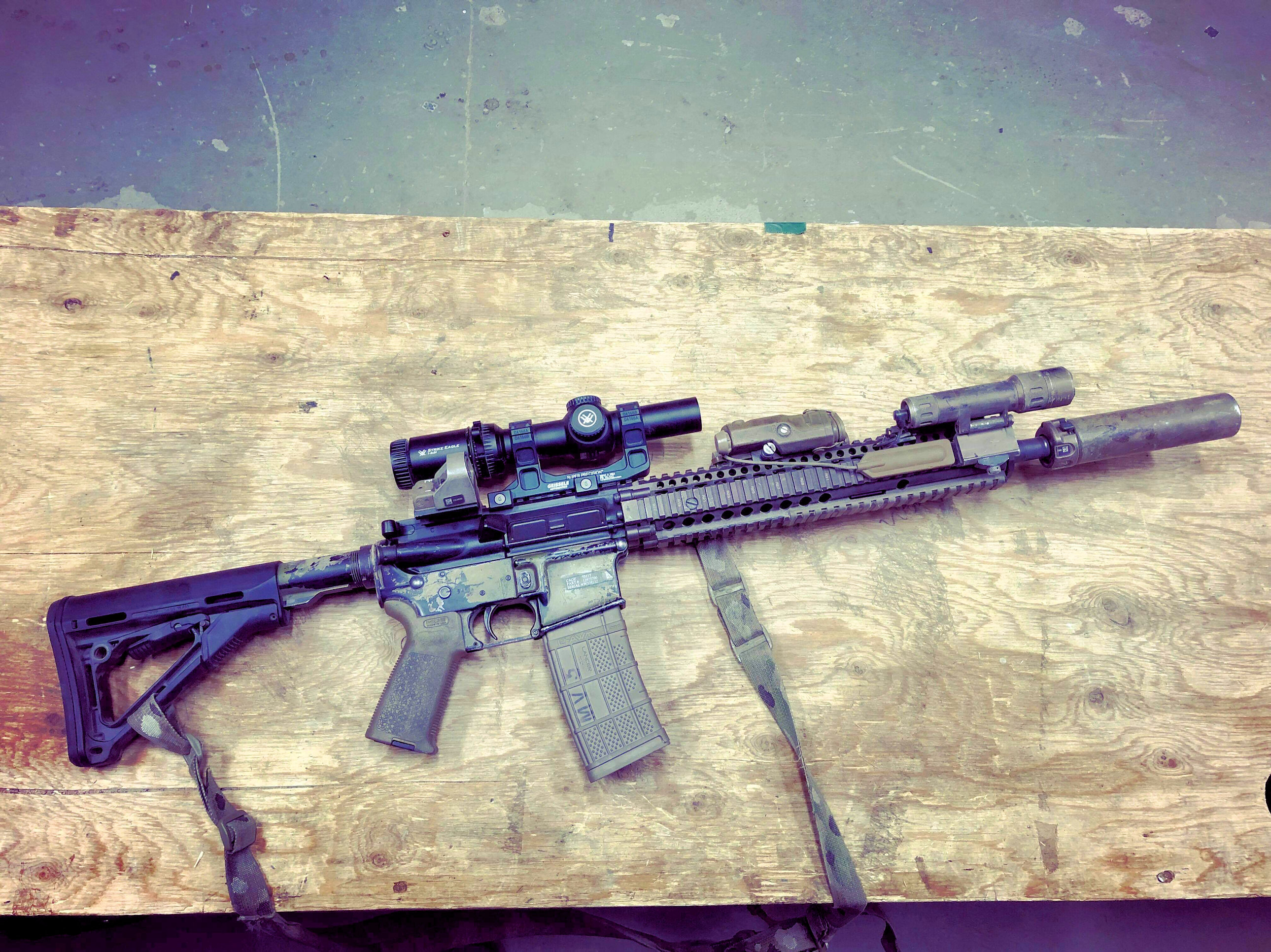 This RIS II Non-FSP was first issued to the team back in 2015, halfway through my last combat tour with this team. There’s a good chance many of these rifles are nearing excessive bore erosion from use, and will need new barrels soon. Scope: Vortex Strike Eagle 1-8x, offset red dot combat optic is an issued EOTech MRDS.

BUIS finally a thing of the past?

You may also notice the preferred back-up optic is the offset red dot. While true irons are hard to break and won’t run out of battery life, the fact is, the increased performance of a red dot trumps any of the perceived benefits of irons. This is something I also addressed previously in Part III, the lack of BUIS on rifles.

With the proven reliability of modern optics, military assaulters/operators including myself, would much rather have as a mini red dot for a back-up sight, since it enhances one’s ability to shoot faster, and can enable better precision shooting than irons. Plus, unless the iron sights are offset at a 45-degree angle, most can’t be speedily employed due to being under the variable optic, which would have to be removed to flip up the back-up rear sight to put it into action.

The case can also be made that single-optic guns are also becoming a thing of the past. Why limit oneself to a red dot or just a LPVO (Low Power Variable Optic) when you can have both an offset mini-red dot for CQB AND a LPVO for everything else? True piggybacked optics have been in military use since 2005-ish (ACOG with Docter Sight on top), but piggybacked optics generally ride too high for real speed work, since one has to lift their cheek up off the stock and find the red dot. That’s not the case with a 45-degree offset red dot. With the latter, one just roles the gun in slightly, with no need to move head at all. The shooter’s cheek stays in contact with the stock at all times, allowing for a very fast and stable transition to the offset red dot. 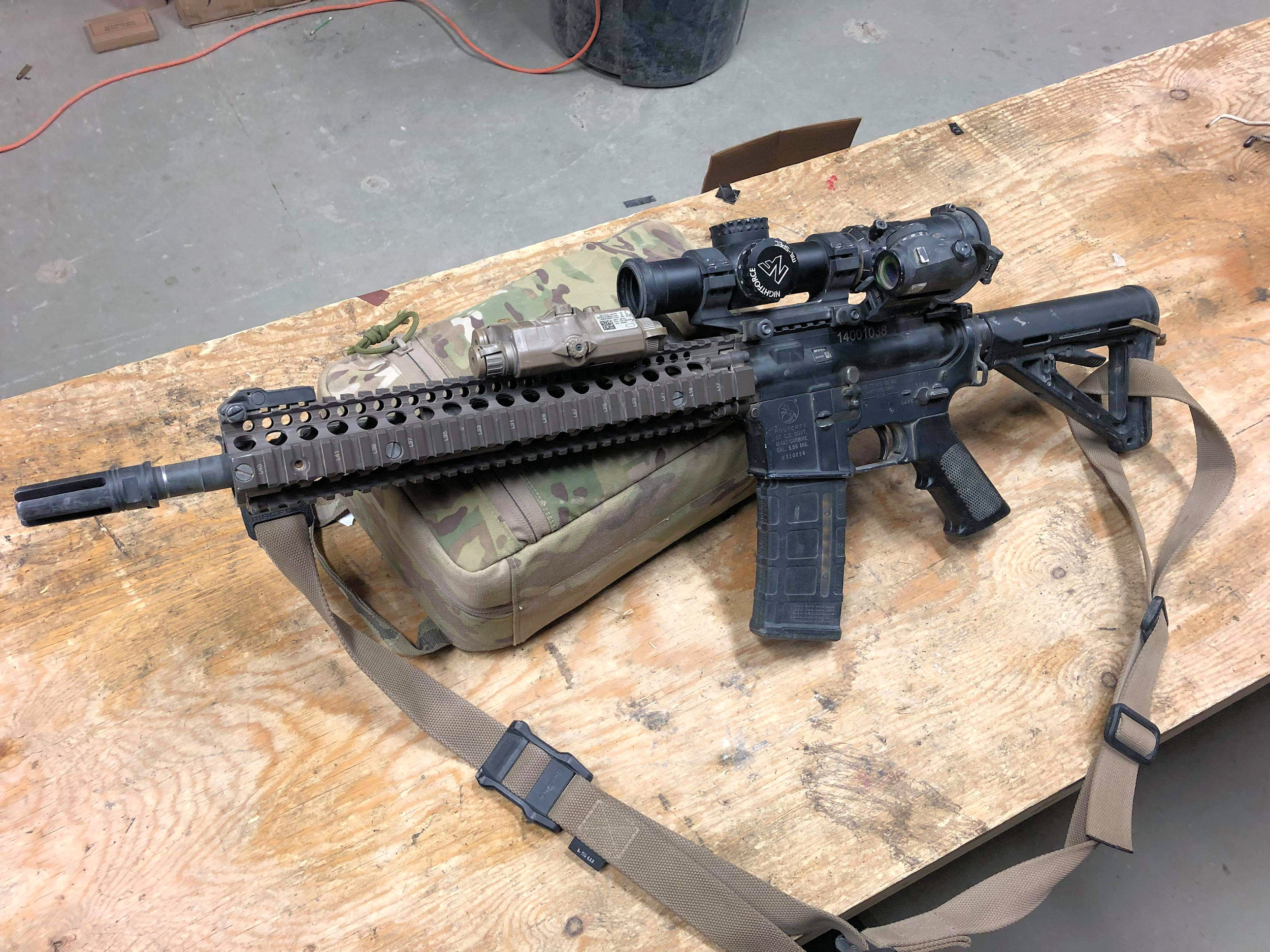 14.5 carbine topped with Night Force Scope and an offset Aimpoint T1. Also note rearward placement of the La-5 laser. This allows for optical gripping of rifle up front. Since majority of firefights take place in daylight, this placement makes perfect sense.

Speaking with one SOF unit team member, I was surprised to hear they were having issues with Lancer magazines not working well in dirty and dusty conditions. If you’ve read all three previous articles, you might have noticed my high praise for Lancer L5 Advanced Warfighter Magazines (5.56mm NATO). I used the same batch on all three Afghan deployments, over four-years.

I can only surmise that Lancer Systems must have changed something with their mags, or perhaps they got a batch of poor-quality-controlled ones. I originally received mine when the L5 AWM mag first came out, back in 2008ish. I’ve never had a problem with them, and still trust them to this day.

Editor’s Note: DefenseReview (DR) will try to get in touch with Lancer Systems to get more information about this (anecdotal) problem with the most recent L5 AWM 5.56mm AR mags. 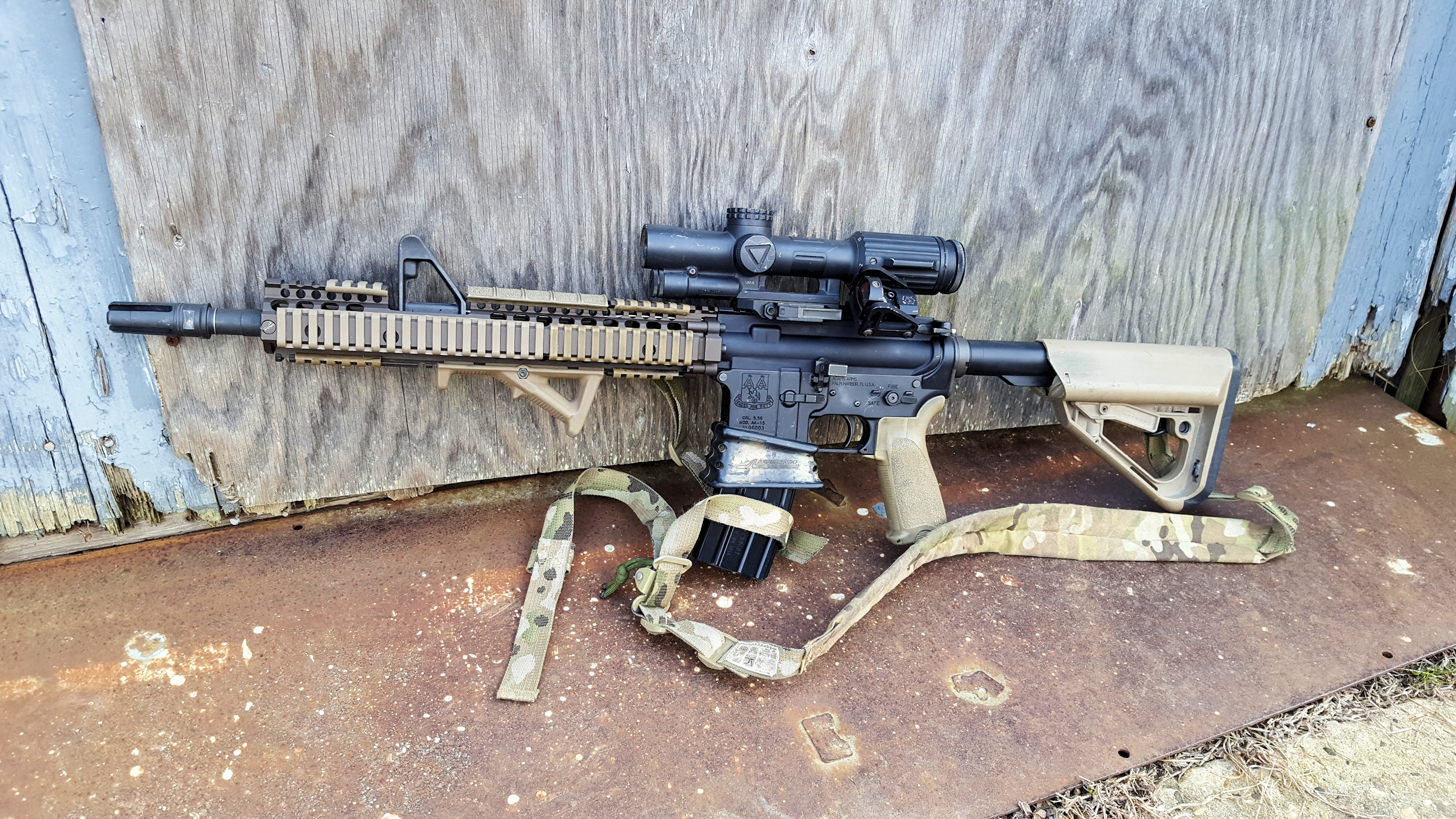 One thing I did after I retired is clone my last work rifle. Since I’ll most likely never go into harm’s way again, I at least wanted a setup I could take to the range and have some fun with. The VCOG, stock, grip, AFG, Arredondo extended mag well, extended bolt catch, sling, and offset mount are all personally owned by the author and were used down range.

If anything, these few examples of rifles being employed down range show that the current-issue SOPMOD Block II optics (specifically the 1×4 SU-230). Are not as favored anymore compared to what’s being offered on the civilian market. While I’ve previously stated that I think the SU-230 is probably responsible for more hits on the enemy, than any other issued optic, fact is, technology has moved on, and these guys are not waiting for SOCOM to issue newer optics. They’re down range now, and based on their experience, have gone ahead and purchased items that have proven to work for them and fit the conditions in which the’re fighting. 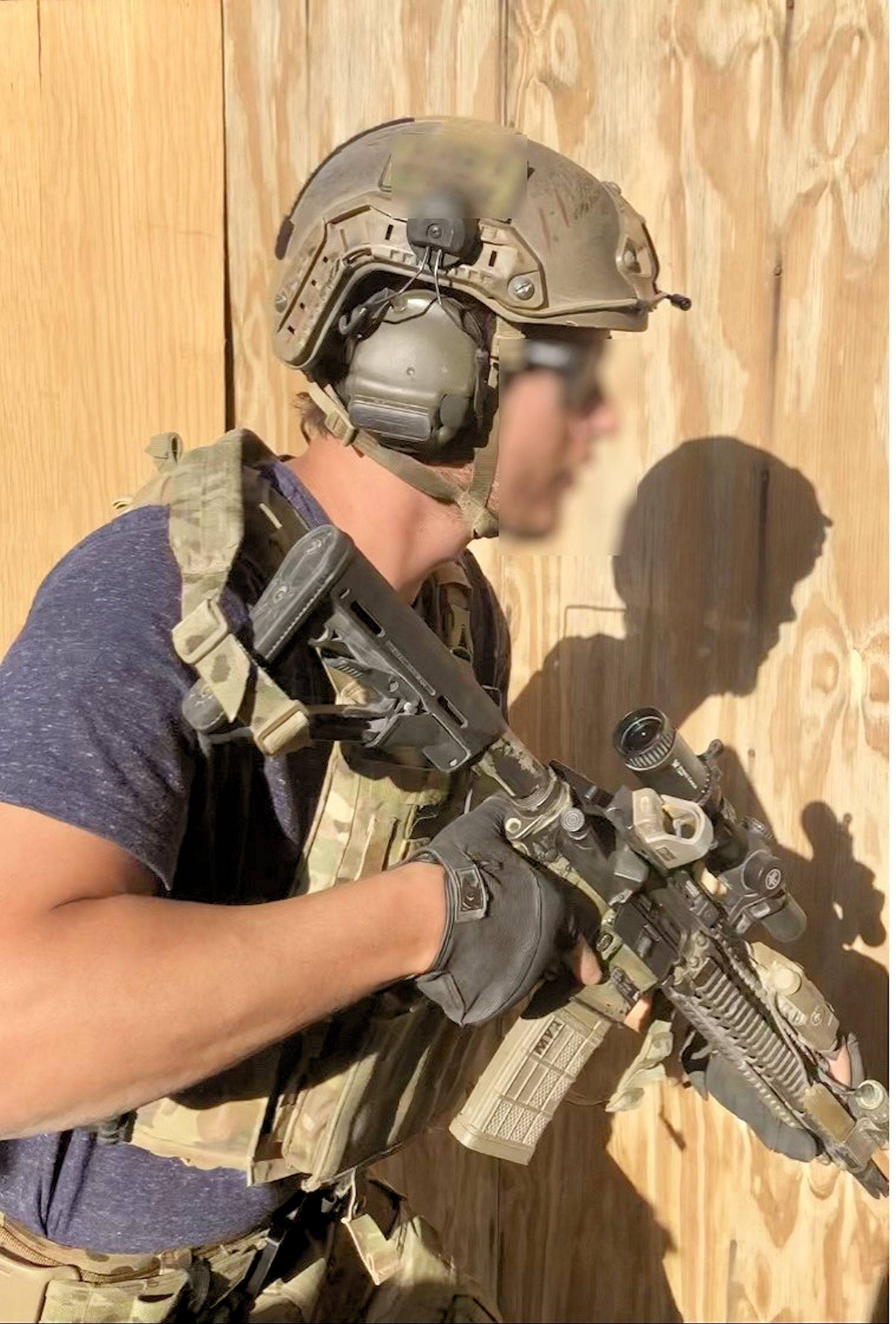 © Copyright 2018 DefenseReview.com (DR) and Jeff Gurwitch. All rights reserved. This material may not be published, broadcast, rewritten or redistributed without receiving permission and providing proper credit and appropriate links.

David Crane started publishing online in 2001. Since that time, governments, military organizations, Special Operators (i.e. professional trigger pullers), agencies, and civilian tactical shooters the world over have come to depend on Defense Review as the authoritative source of news and information on "the latest and greatest" in the field of military defense and tactical technology and hardware, including tactical firearms, ammunition, equipment, gear, and training.
Previous Barnes Precision Machine BPM Accu-Set Adjustable Gas System for Competition and Tactical AR-15 Carbines! (Range Video!)
Next Gerald R. Ford Class US Aircraft Carrier Defenses/Survivability Analysis Animation by The Infographics Show: How Well is it Protected?