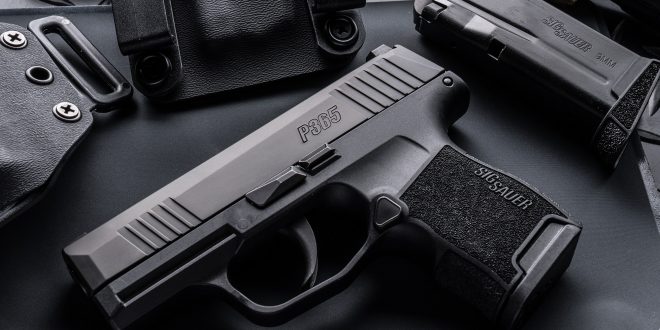 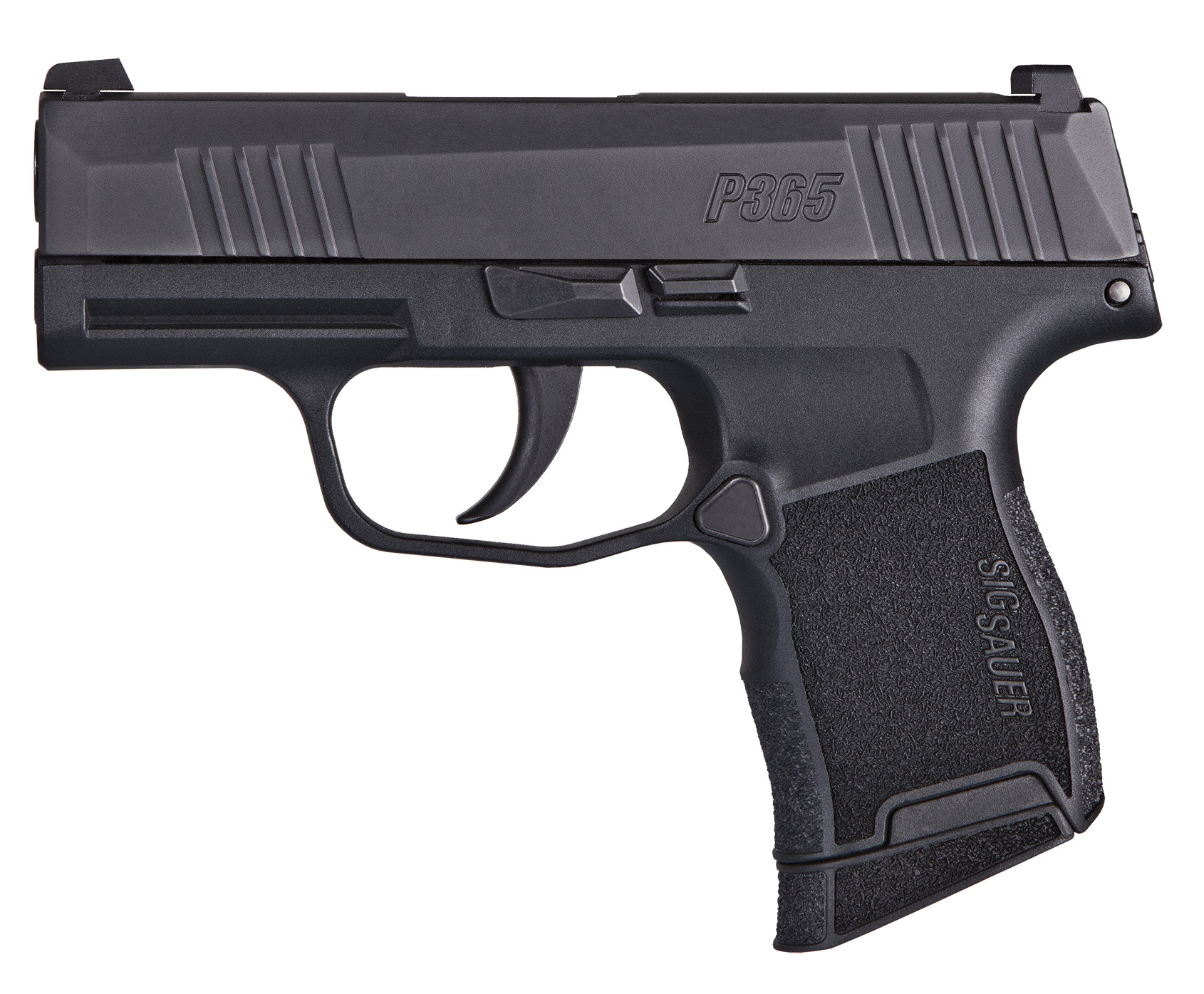 DefenseReview (DR) received the following press release last Monday. Looks like the new SIG SAUER P365 striker-fired high-capacity sub-compact high-capacity 9mm (9mm Parabellum/9x19mm NATO) pistol is designed to go head to head against the Glock 43 (G43), and perhaps even the Glock 19 (G19) as well, in the CCW (concealed carry pistol market), with the idea of out-ammo’ing the G43, and out-compacting the G19, as it splits the difference in size and ammo capacity between those two pistols, giving the end-user/operator 11-13 rounds at their immediate disposal, depending on which mag they use (10-round standard, or 12-round extended). Not bad for a sub-compact CCW pistol.

Will the SIG P365 thus be the ultimate sub-compact CCW pistol? Time, user/owner feedback, and sales will tell, but a sub-compact pistol with an 11-13-round ammo capacity may just prove to be the ultimate size/capacity compromise.Let’s just hope it’s easy to shoot well, and goes bang every time.

Anyway, DR plans to handle the SIG P365 at SHOT Show 2018, and perhaps even test-fire it at Industry Day at the Range 2018. In the meantime, Defense Review is cautiously optimistic about the new blaster.

Details on the new blaster are below in the company’s press release on it.

Editor’s Note: SIG’s introducing the P365 on the heals of landing a new US Army MHS pistol contract, so the company appears to be on a pretty good roll, at present.

The following is a SIG SAUER press release: 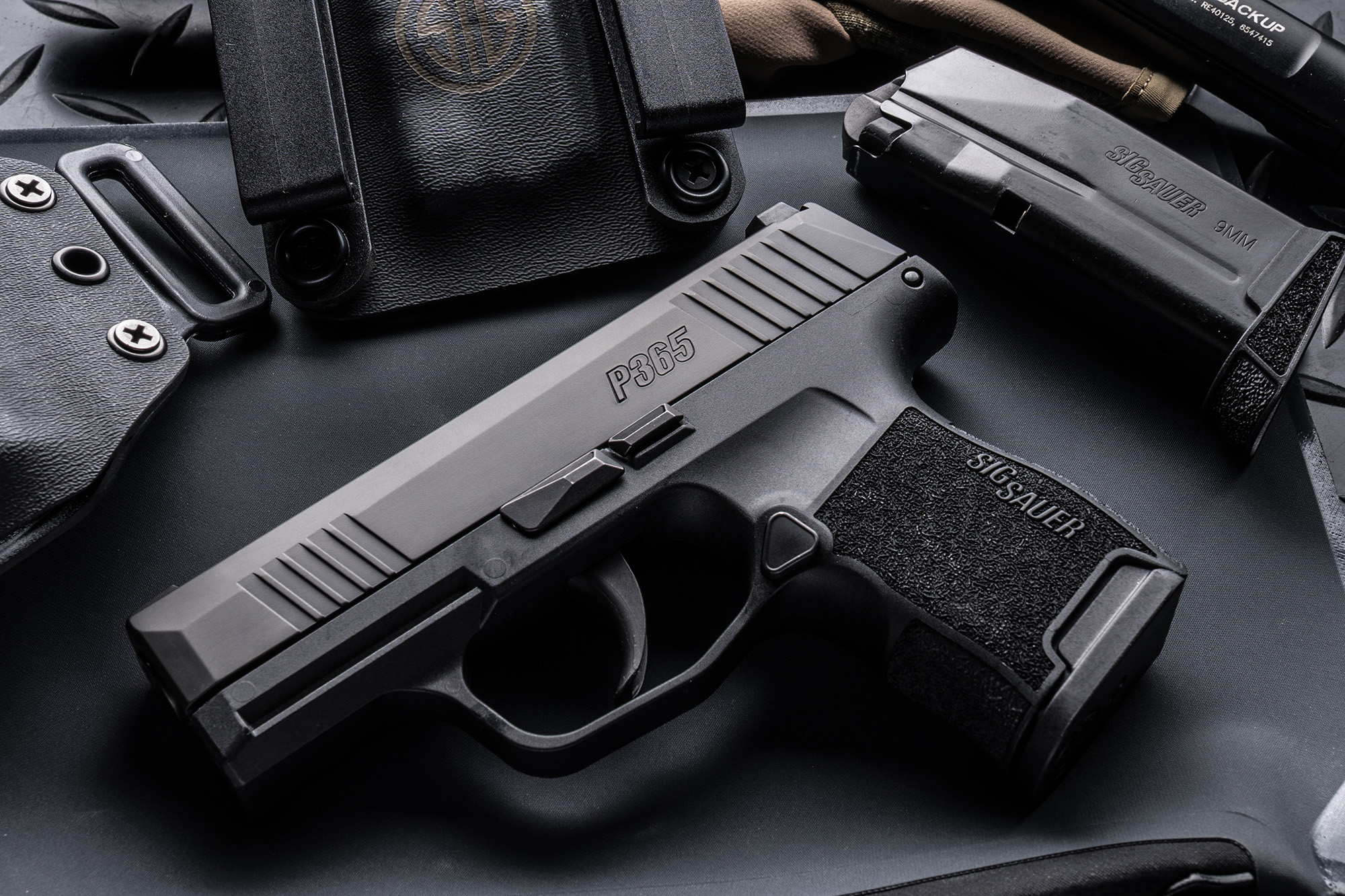 Newington, NH (January 8, 2018) – SIG SAUER, Inc. introduces the new High-Capacity Micro-Compact P365 – the ultimate concealed carry pistol. This revolutionary striker-fired 9mm pistol offers the perfect balance of capacity and concealment with unrivaled shootability and ergonomics. The P365’s patent-pending, narrow-neck, modified double-stack magazine holds 10 rounds in both the flush-fit and extended versions, plus one in the chamber, for a full capacity of 11 rounds – nearly a 50 percent capacity increase over pistols in its class. An optional 12-round extended magazine equips this micro-compact pistol with full-size 13-round capacity, allowing you to carry more, everyday – 365 days a year. The P365 is also smaller and lighter than most other pistols in its class, measuring 1-inch wide, 5.8-inches long, and 4.3-inches tall with a barrel length of 3.1-inches. It weighs just 17.8 ounces with an empty magazine.

The unique grip design and higher grip to bore axis reduces perceived recoil and makes the P365 as comfortable to shoot as many mid-sized pistols. The grip is fully-textured polymer with a slim-line rail that will accommodate SIG light or laser accessories. The stainless-steel slide comes standard with front and rear serrations for easier slide manipulation, as well as SIGLITE® night sights for faster sight acquisition under all lighting conditions.

“As a company, we are relentless in our quest to be better – to constantly improve upon our existing products and to design and build superior products than those currently on the market,” said Ron Cohen, CEO and President of SIG SAUER. “The P365 is a result of this push. We built this pistol around our new, proprietary magazine for maximum concealability, capacity and shootability. The P365 is a pistol for professionals and civilians alike who want a smaller, high-performance pistol that does it all. This is the ultimate, everyday concealed carry pistol.”

Disassembly is safe and easy with a three-point takedown that does not require the trigger to be pulled. A generous trigger guard undercut also allows for a higher hand position and better retention. The narrowing magazine design allows the upper part of the grip to be perfectly contoured to fit the shooter’s thumb when fired.

In continued partnership with Blackpoint Tactical, one of the nation’s premier holster manufacturers, SIG SAUER is offering a series of concealment holsters specifically designed for the P365. Immediately available for order are the Blackpoint APX and IWB holster variants.

As a complete systems provider, SIG SAUER will be launching several new products specifically designed to complement the P365. Products will include ammunition optimized for everyday carry, a high-performance weapon light, a laser sight, a P365 compatible suppressor and a P365 air pistol. Announcements and press releases will be forthcoming on each of these exciting and new P365 products.

© Copyright 2018 DefenseReview.com. All rights reserved. This material may not be published, broadcast, rewritten or redistributed without receiving permission and providing proper credit and appropriate links.