Speaking of Ashbury Precision Ordnance (APO) tactical rifles, the APO Custom Shop (APOCS) has apparently built some custom .338 Lapua Magnum SEFR (SABER Enhanced Factory Rifle) anti-materiel/sniper rifles for the premier episode of Shooter. This is, in DefenseReview’s opinion, an excellent choice, since the APO SABER rifle chassis system (in this case, the SABER SVL-A2), is a proven one that can achieve up to .5 MOA (Minute Of Angle) accuracy, and look good while it’s doing it, which is important for television (or film).

Anyway, DR’s really looking forward to seeing the APO SEFR .338LM tactical rifle in action on the small screen very soon. In the meantime, enjoy the Shooter trailer video below.

The following is the official APO press release on it:

Ruckersville, VA. – AshburyPrecision Ordnance Mfg‘s Custom Shop (APOCS) was selected by Independent Studio Services, the world’s largest weapons provider to the movie and television production industry, to create a distinctive sniper rifle especially for the new SHOOTER television series premiering on the USA Cable Network November 15, 2016.  The new TV series is based on the hit 2007 movie by the same title starring Mark Wahlberg, who is also the new series’s Executive Producer.  “The SHOOTER production team did not want a non-functioning Hollywood prop,” said Matthew Peterson, Ashbury‘s Product Development Coordinator.  “It was important that the sniper rifle used in the TV series had modern, realistic character and be a fully functional ‘real-steel’ precision rifle system.  The new signature SHOOTER TV series rifle needed to be based on a ‘commercially available’ factory rifle, built on the innovativeSABER®-FORSST® modular rifle chassis system.”  APO had just the answer…a SABER Enhanced Factory Rifle – SEFR! 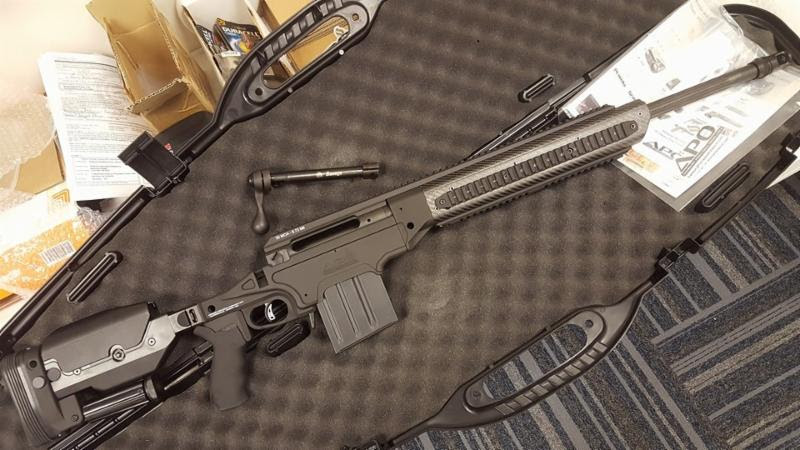 Visit all our Online Properties…