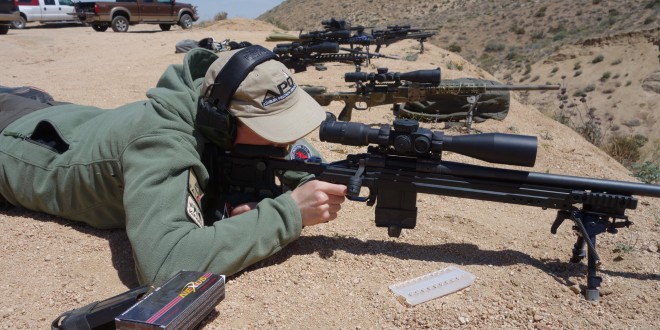 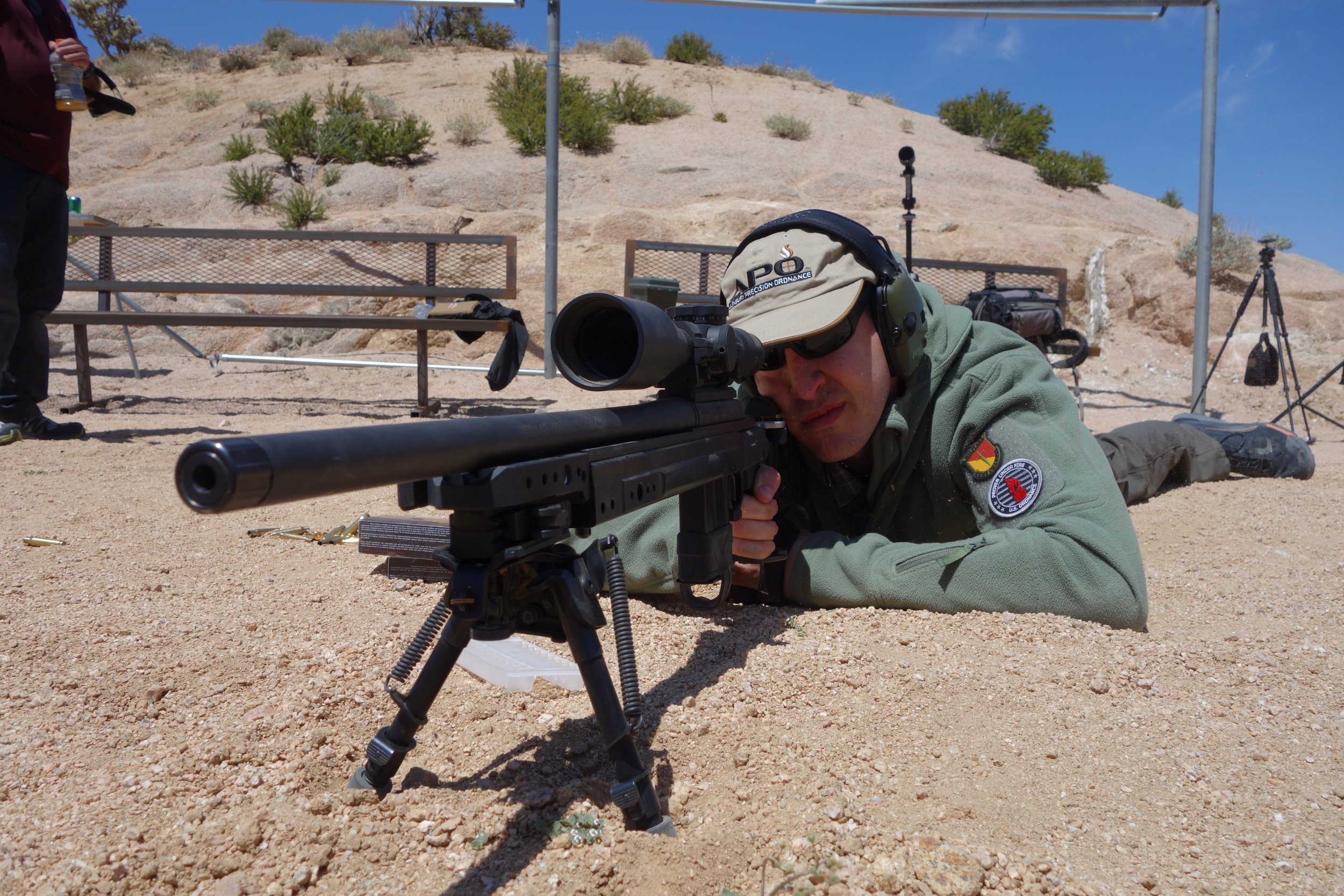 DefenseReview (DR) recently got back from a very interesting two-day precision rifle/long-range-interdiction (i.e., sniping) course put on by the newly-launched U.S. Optics Academy for gunwriters and other (tactical firearms)industry professionals. This was actually the first long-range precision rifle course we’ve ever taken, due to some serious avoidance behavior we’d engaged in up to this point. The reason DR had avoided this type of course is its obvious complexity and difficulty, due to all the physical factors (distance, windage, value/direction, elevation, etc.), math, and shooting skills involved. But, as it turns out, sniping is actually a piece of cake, and DR easily picked everything up immediately. 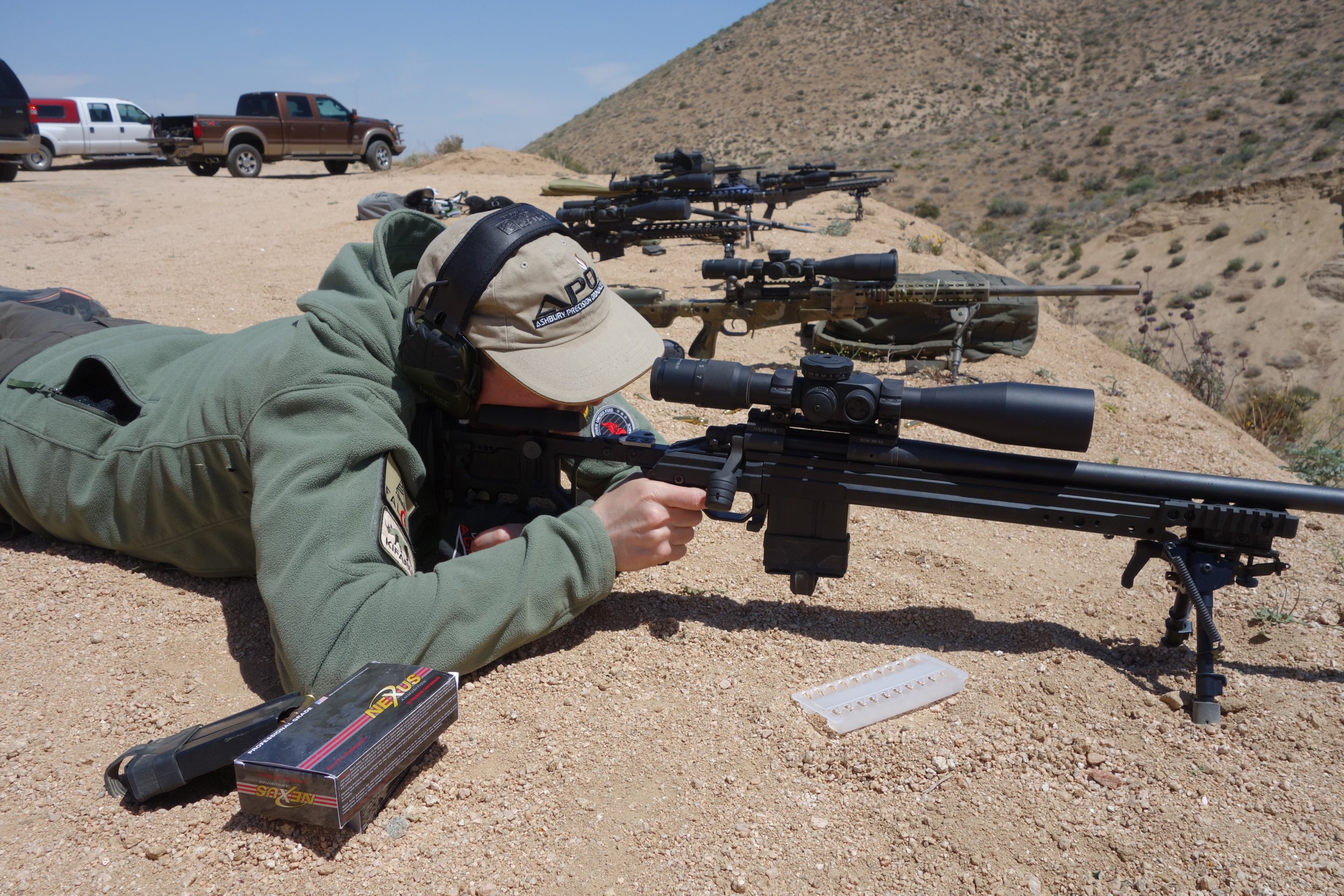 Just kidding. We (DR) actually found the course pretty tough, which is pretty much what we expected. It was kind of like drinking from a firehose while running up a steep hill. It’s not that the math, including things like windage and MOA (Minute of Angle)-to-Mils (Milliradians) conversion, is all that difficult. The equations are pretty simple. However, there’s quite a bit of math and number tables to remember, and you have to practically apply it pretty quickly out on the range if you want to get hits on target, especially when you have to quickly correct for windage in high winds going different directions with different values all the way out to a long-range target. 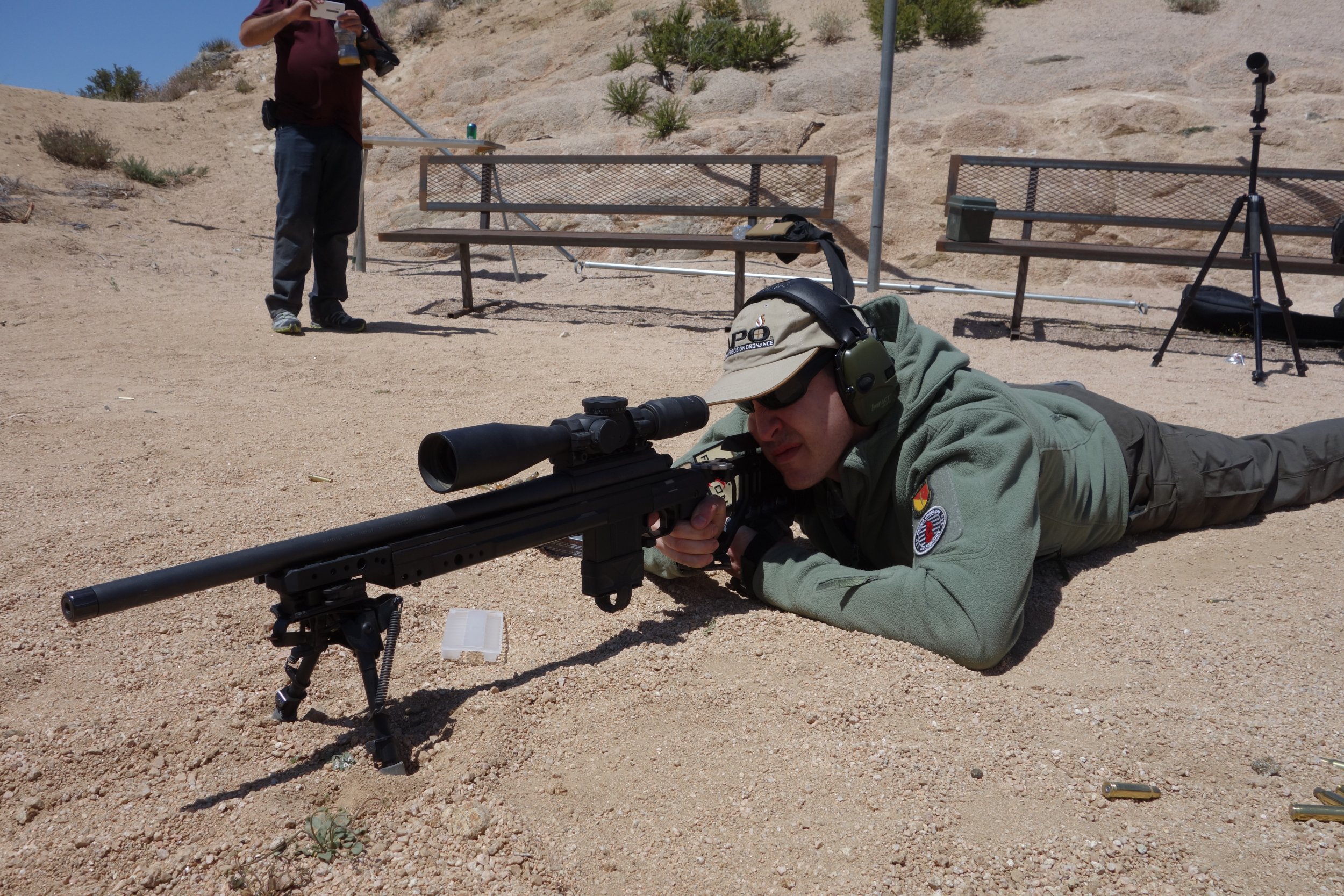 For that, DR definitely had to rely on a spotter, and on the second day, it took some one-on-one with head instructor and former Marine Corps sniper Tyler Hughes to get us dialed in and hitting out to 1000 yards in 25+ mph winds on the second day of the course. To be honest, your humble correspondent only made it to 800 yards, since I was dealing with a neck injury, and had to call it after I hit the 800-yard target. Regarding the 800-yard hit, it took Hughes making the elevation adjustment on U.S. Optics scope’s turret I was running, for me to nail it. For some reason, I couldn’t accomplish it just using the Horus H59 reticle (Mil-Dot reticle holdovers). But accomplish it I did, and I did it with Nexus .308 175gr Match HPBT (Hollow Point Boat Tail) ammo. 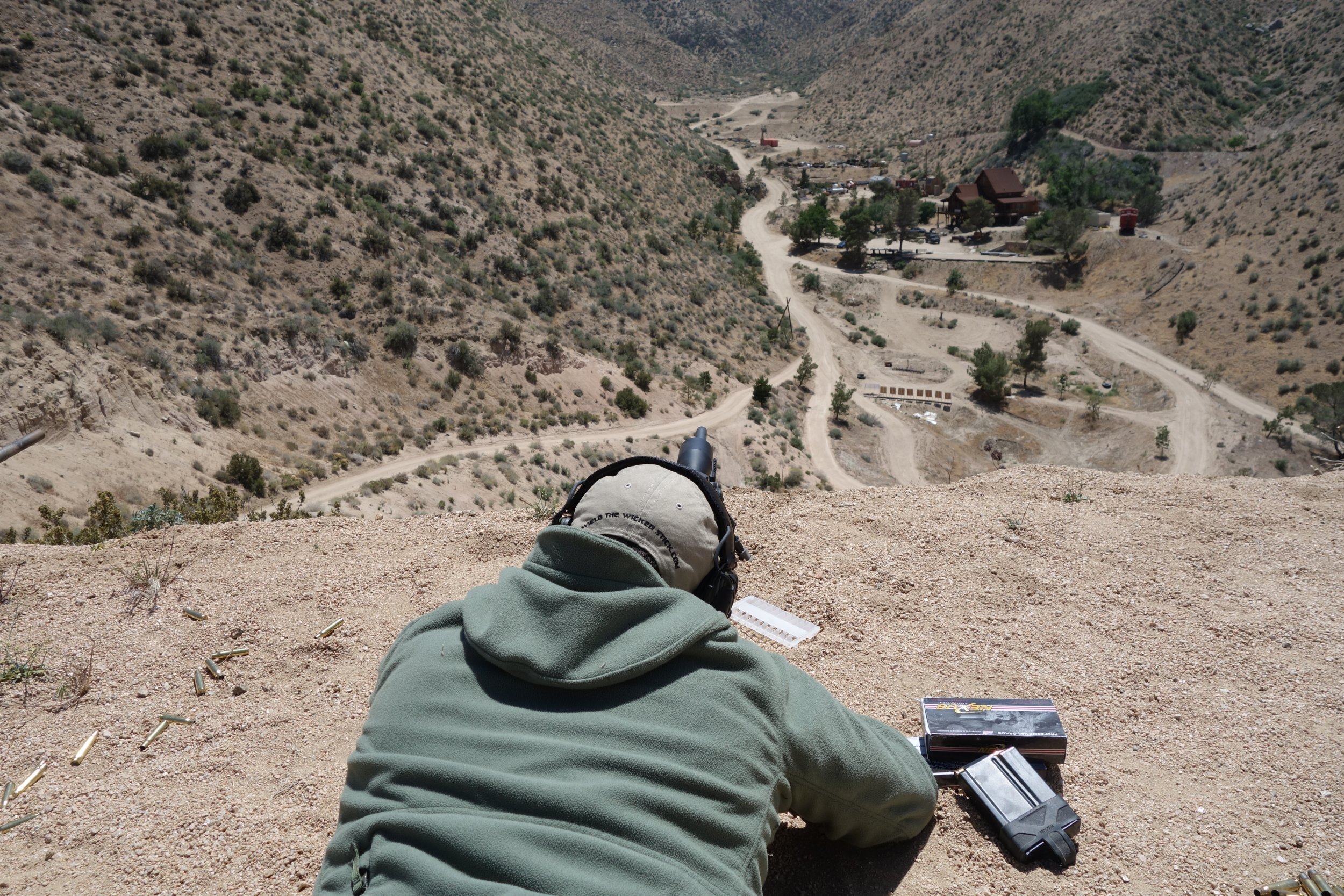 Just hitting at 800 yards at high windage was pretty difficult for me, since I was running a bolt gun (bolt-action 7.62x51mm NATO/.308 Win. rifle)  and don’t have a lot of time running that particular platform quickly under stress. Frankly, I was just glad to get the hit at 800 (yards) under those conditions, and greatly appreciated Hughes’ assistance. I was getting pretty frustrated, but he really stuck with me until I got that target ding. I found Hughes to be a very adept instructor with a no-bullsh*t demeanor and delivery. He was great both in the classroom AND out on the range. He was a much better instructor than I was a student, and he was tasked with cramming A LOT of information down our throats. It should be noted that before leaving the U.S. military, he was selected as the Marksmanship and Operations/Tactics Instructor for the Marine Corps Scout Sniper School West at Camp Pendleton, California. Pretty impressive. 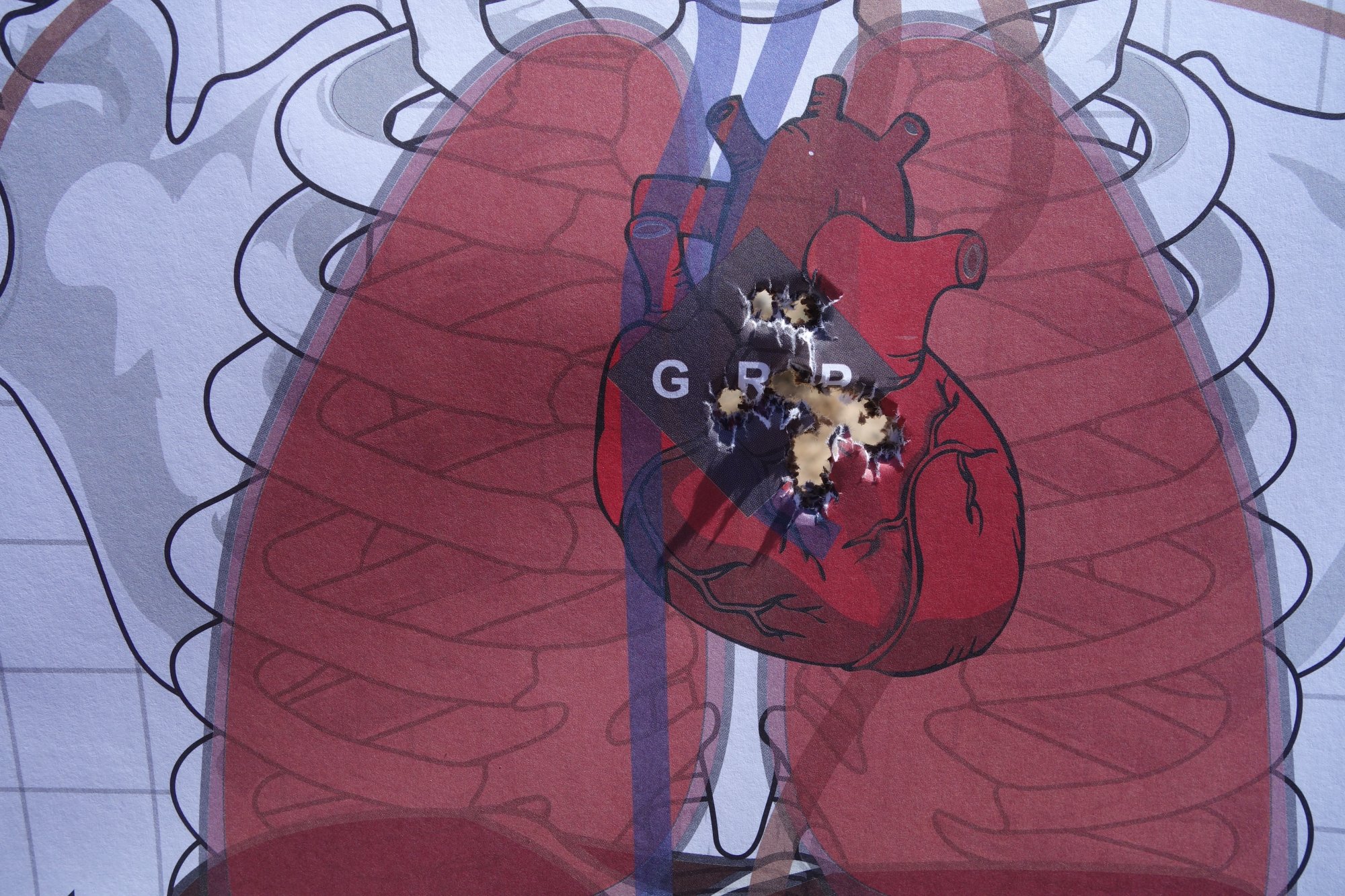 Arguably, my best shooting during the course was my 10-shot group into the heart at 100 yards (after obtaining a proper zero) with HSM 308 Win. 168gr HPBT Match ammo, which came to either 1.3 inches (1.3″) or 1 and 3/16ths inches–we’re not quite sure which–which I believe was the second-best grouping behind the two guys who tied at 7/8ths of an inch. Hughes’ instruction on proper breathing and trigger control really helped on that one.

As terrific as the course was, two days simply wasn’t enough time for me to really get squared away enough to be truly self-reliant out there, and to make my own scope adjustments and holdovers accurately. I think I would have needed at least two or three more days, and even then, I’d ideally want to do some homework drills (perhaps with a group) at night between training days to get the mathematical equations and number tables down to the point that they’re second nature and I can quickly calculate for the proper scope adjustments and holdovers under stress. Until that happens, I’ll need to rely on either a ballistic computer or a good babysitter, i.e., spotter. Again, there’s a good reason I’ve avoided this stuff for so long. It ain’t easy, at least not for me–but Hughes gave me as good an educational base as possible in two days via both classroom and field instruction, considering the size of the class. I would have of course preferred a little more one-on-one instruction time with him, but it was a pretty big class, so that wasn’t possible given the limited time frame. 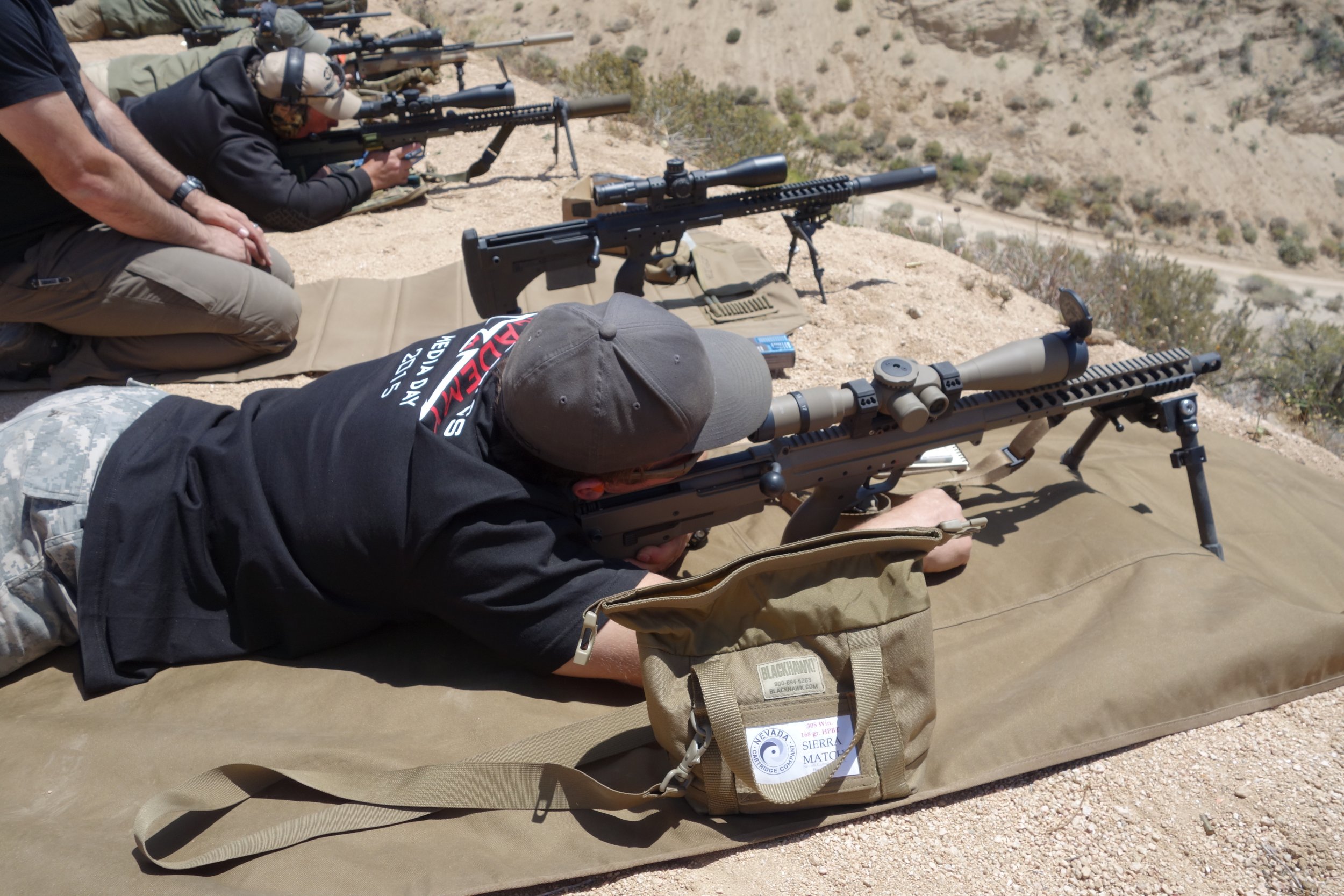 Interestingly, the best shooters/peformers in the class were running what appeared to be Desert Tech Stealth Recon Scout A1 (DT SRS-A1) modular, multi-caliber bolt-action bullpup rifles in 7.62mm NATO/.308 Win. caliber–some of them suppressed–and (what appeared to be) Desert Tech DTM .308 Win. ammo using 175gr OTM (Open Tip Match) boattail bullets. Defense Review is a big fan of the Desert Tech guns, as they are very compact, accurate and versatile, and look good. DT guns (and ammo, apparently) work exactly as advertised, which is very well. DR also really appreciated the suppressors when shooting next to them–nice and quiet, WHAT a difference. 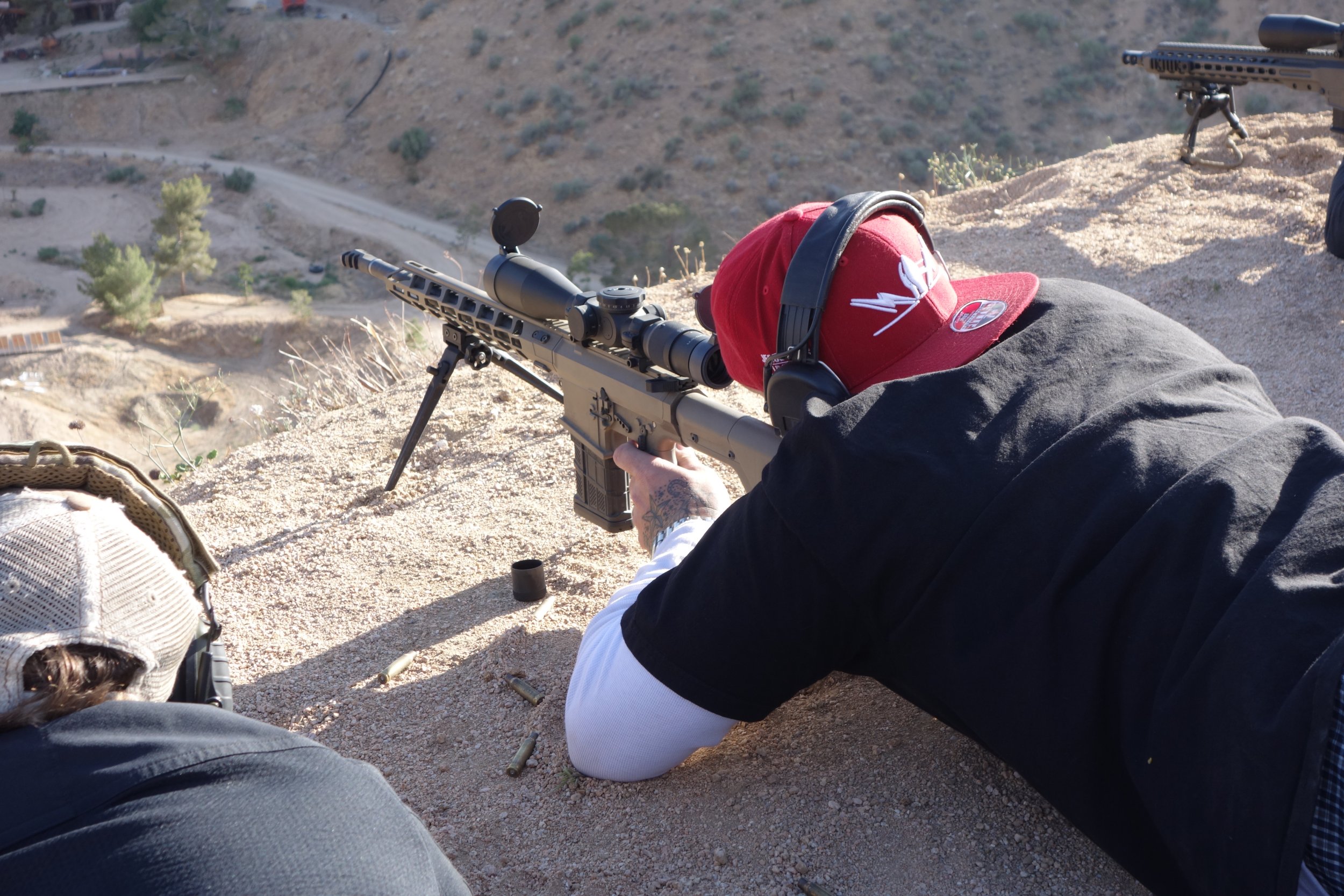 Anyway, DR enjoyed the course–even though we found it to be difficult with information overload–and we can unhesitatingly highly recommend the full/longer course for anyone reading this. If you want to learn the fine art of long-range interdiction/sniping, the U.S. Optics Academy is worth a very close, serious look. HIGHLY recommended. Plus, the U.S. Optics Academy cabin’s pretty cool.

Editor’s Note: On a quick side note, Jesse James of Jesse James Firearms Unlimited (JJFU) also attended the course, and he’s got some interesting guns and muzzle cans (silencers/sound suppressors) of his own. James ran a JJFU Nomad 10 7.62mm NATO/..308 Win. AR (AR-10/SR-25-type) during the course, which looked pretty good, and DR got to see and briefly shoot his 5.56mm NATO/.223 Rem. JJFU Nomad AR-15 rifle/carbine and rather interesting and innovative JJFU Aero-Sonic Suppressor, and came away really impressed with them, particularly the can, which we’ll be covering in a follow-up piece. We found James to be a down-to-earth, nice, and intelligent guy who was happy and willing to answer any/all questions we had about his products. Basically, he was just another guy on the trip wanting to become a better long-range precision rifle shooter, and blended well with the group.

Oh, and special thanks to the lovely (and talented) Amber Thorpe of Max Ordinate Academy (MOA) for shooting the very nice range photos of the author. Ms. Thorpe really went out of her way for us, and we appreciate it. 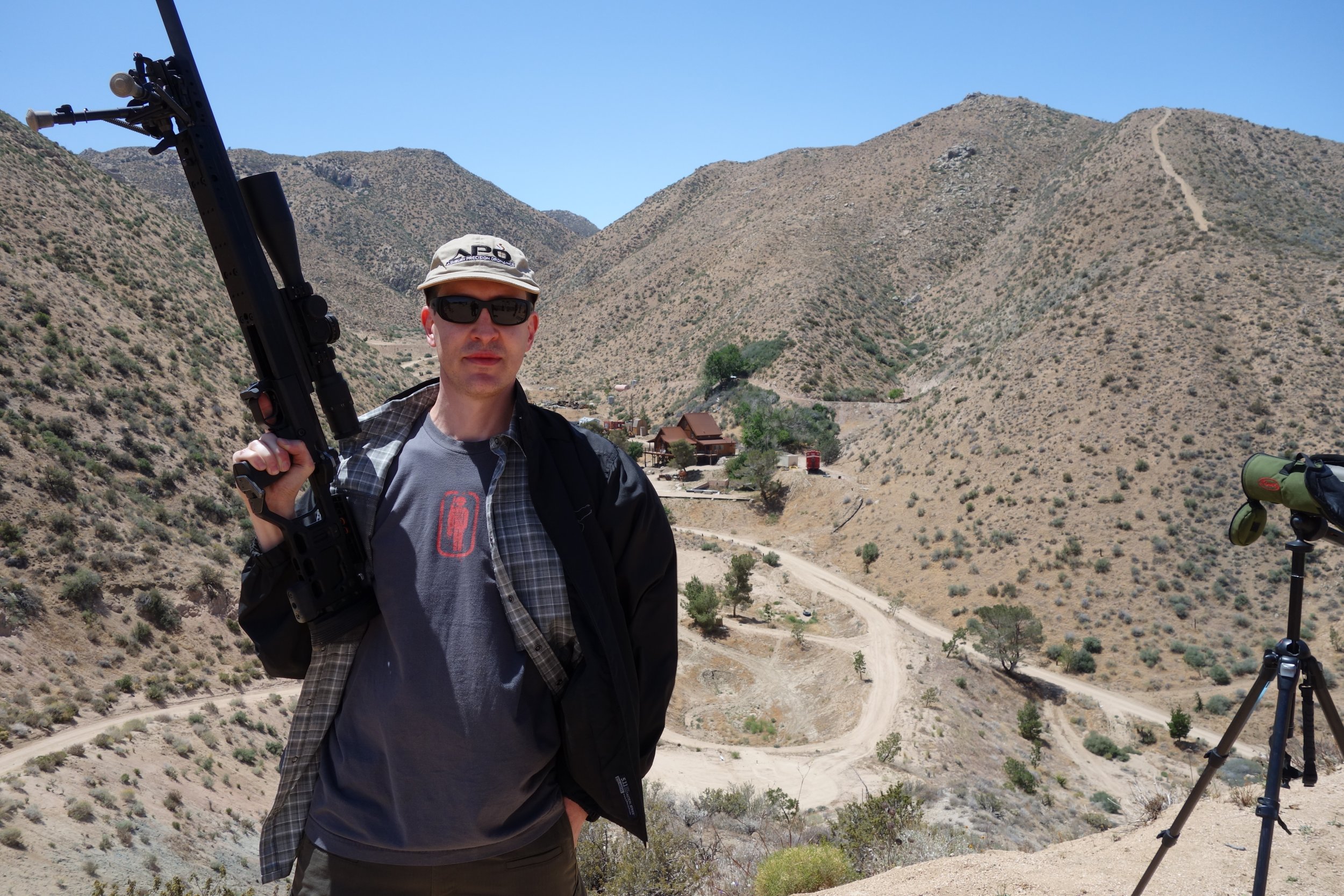 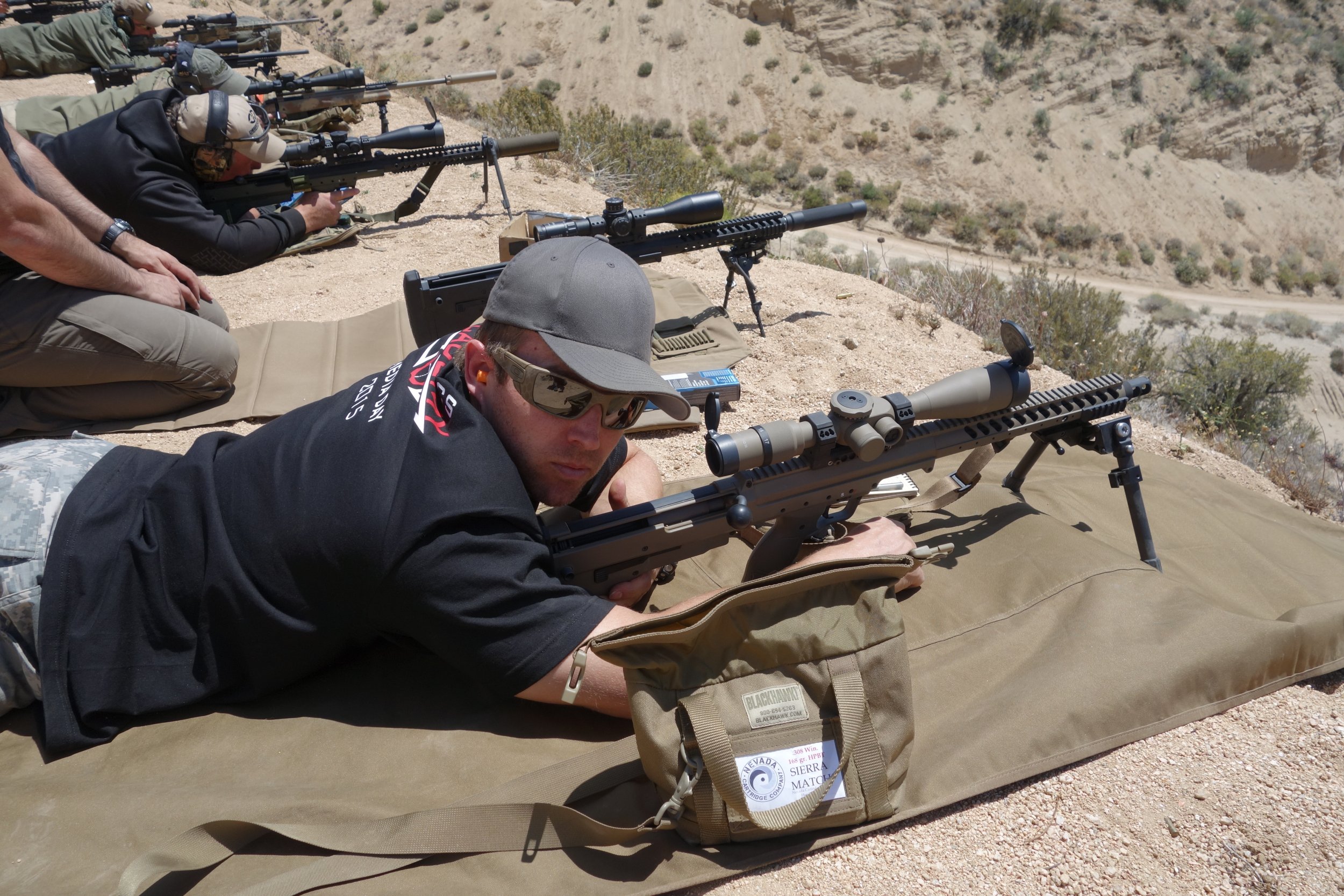 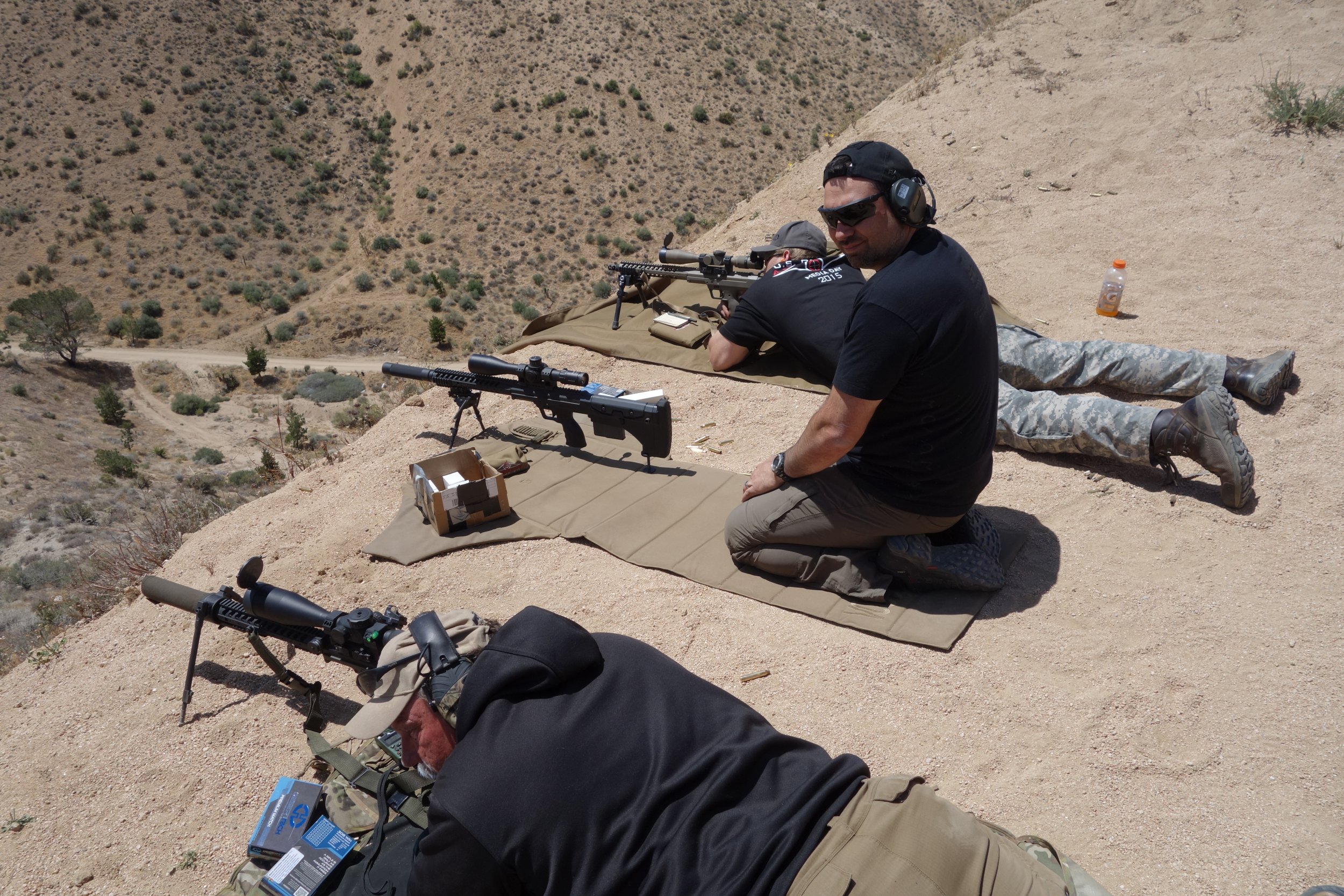 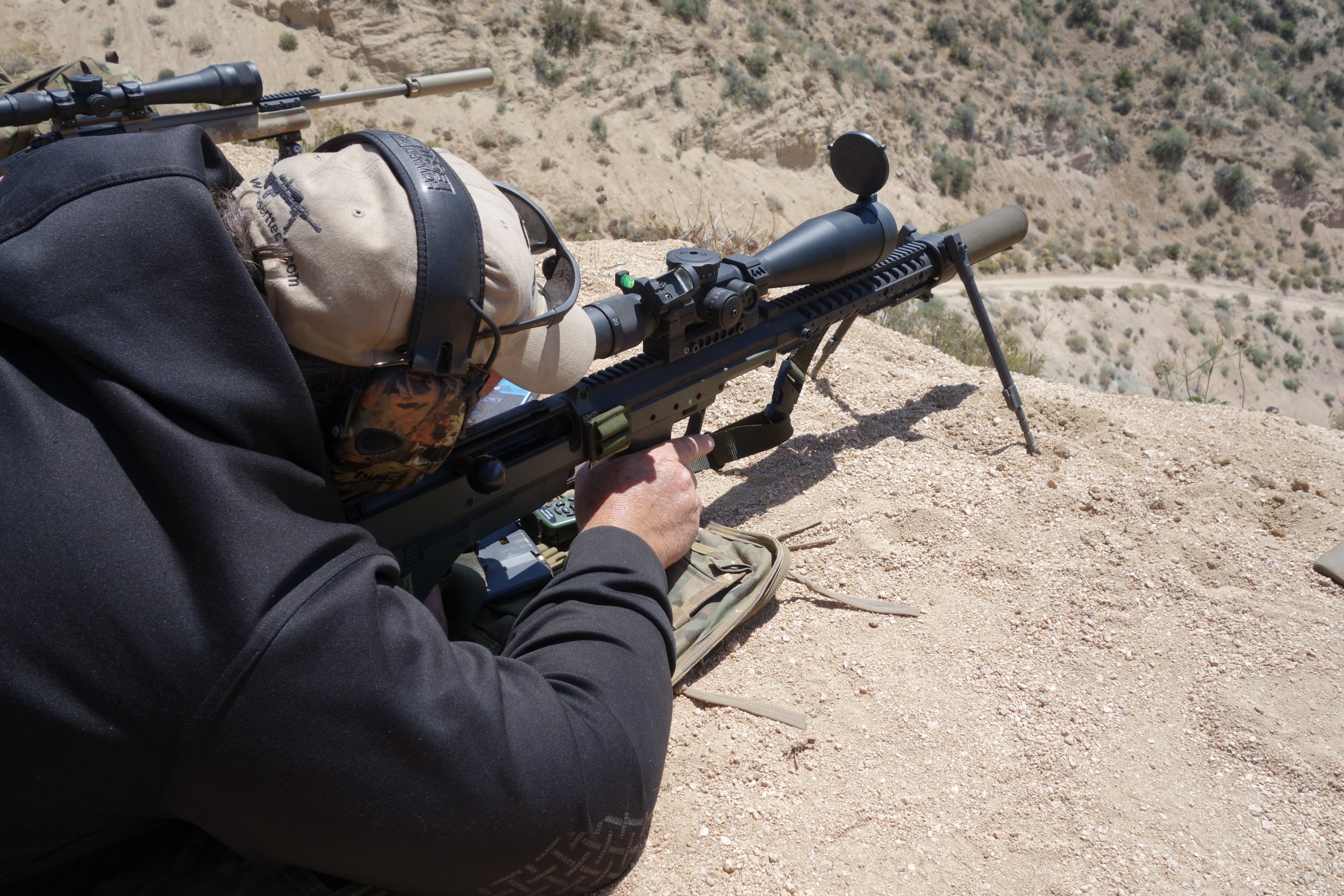 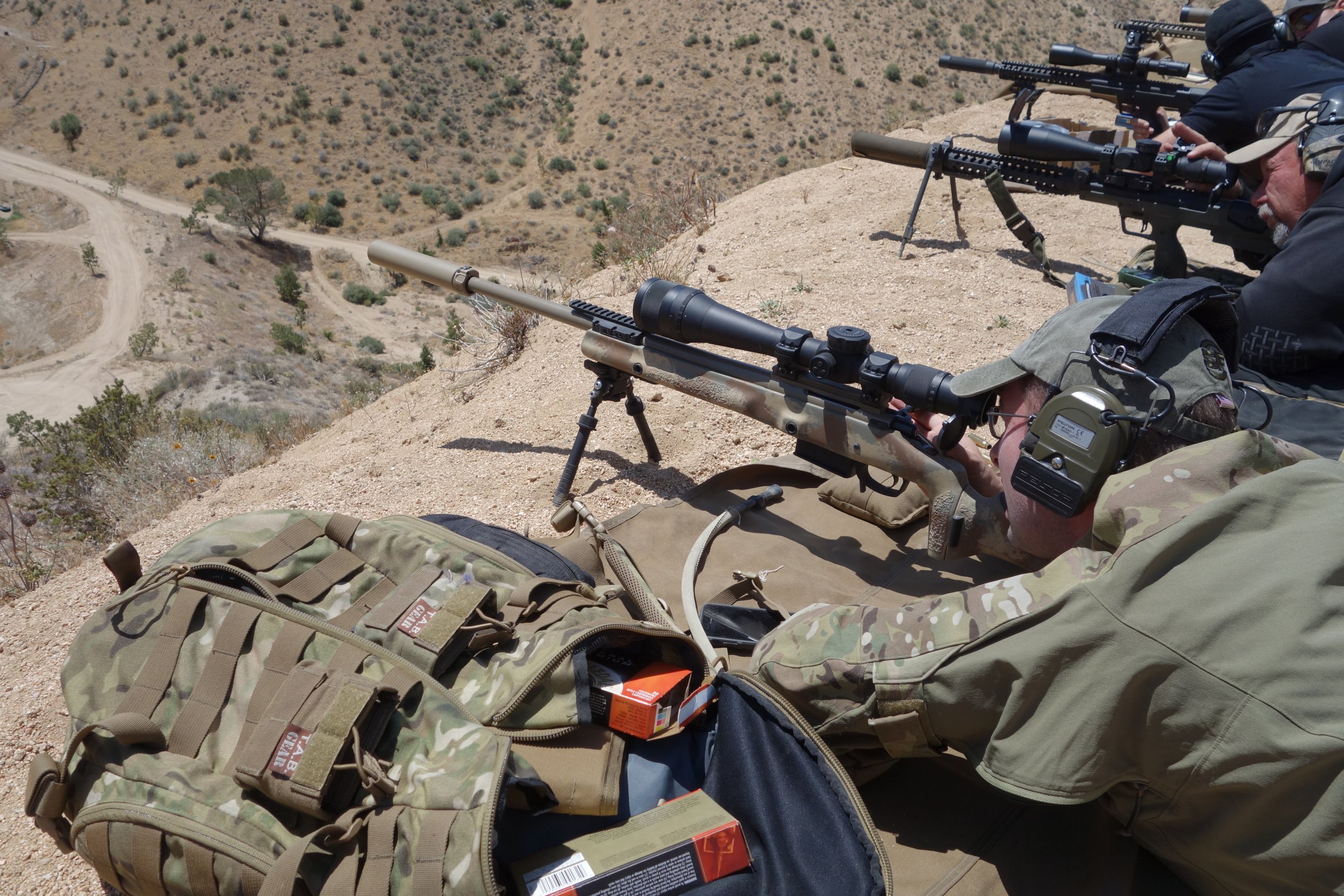 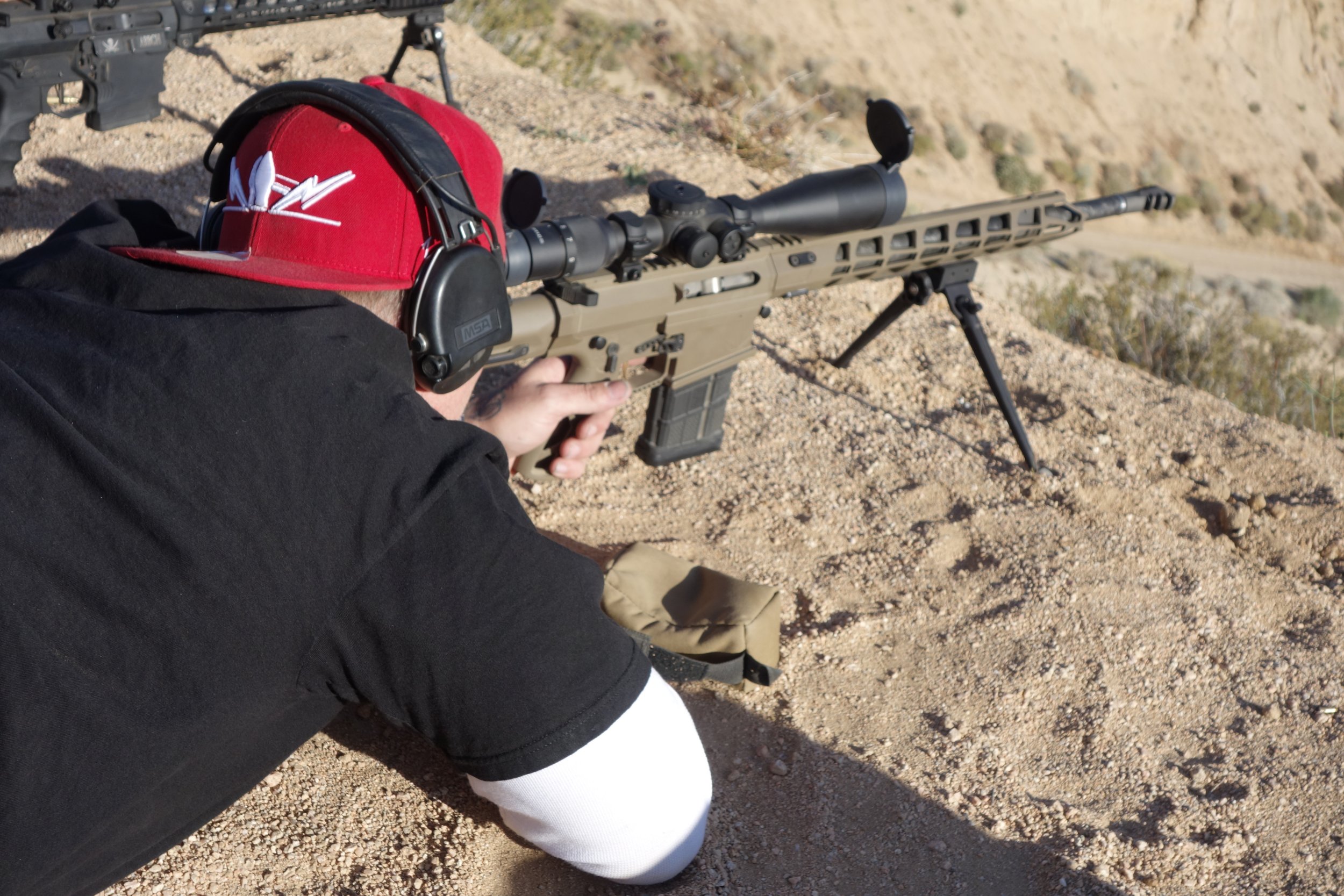 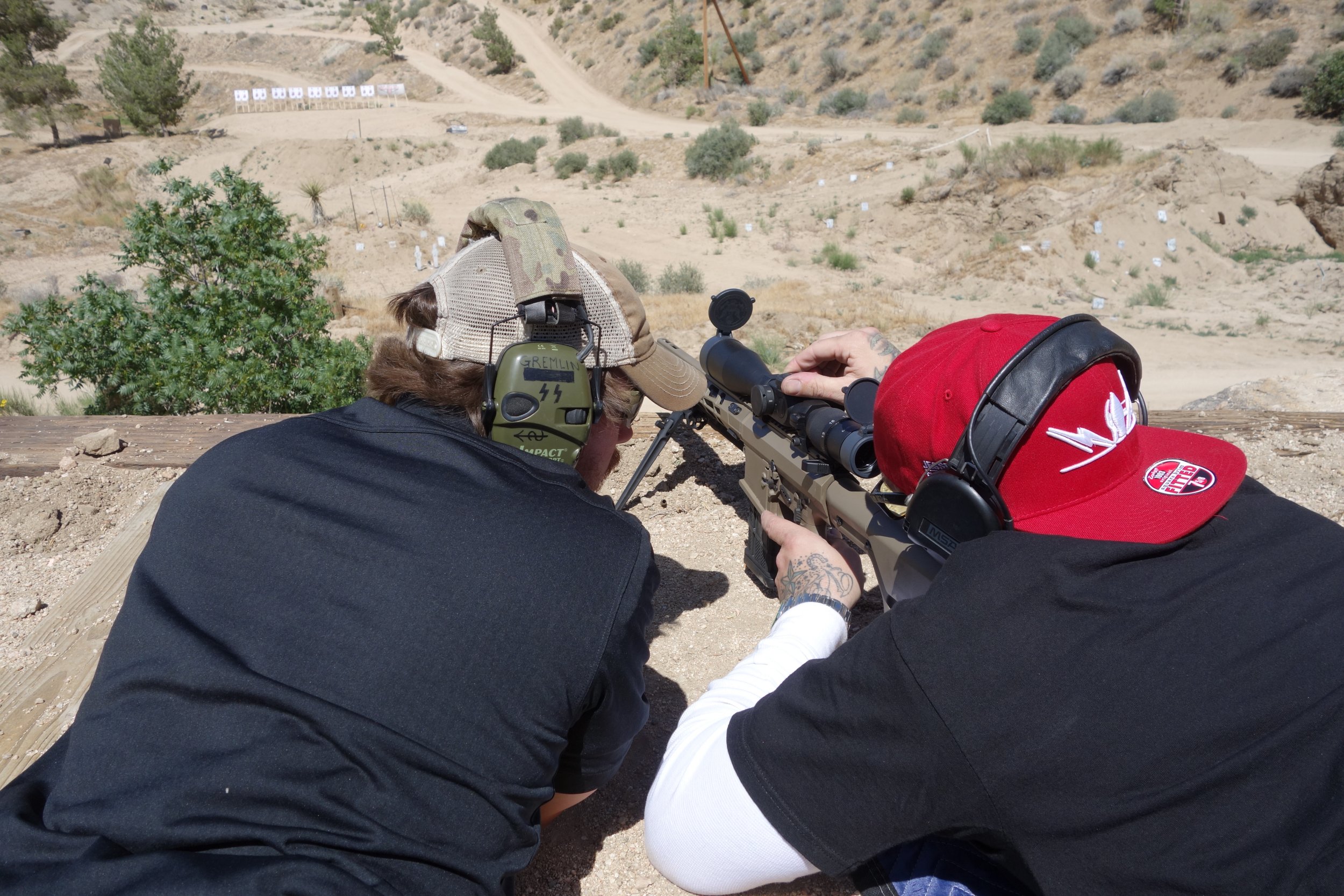 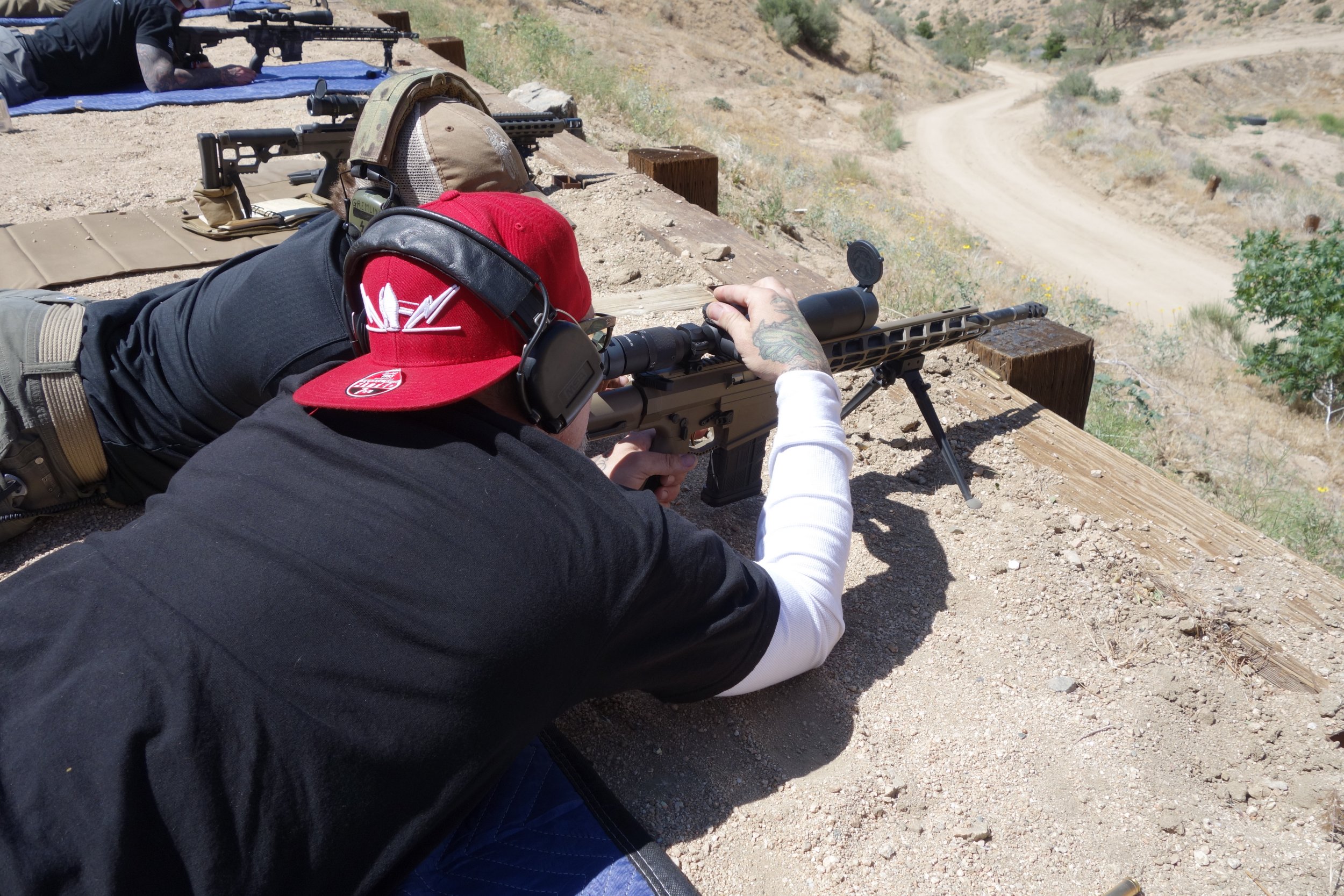 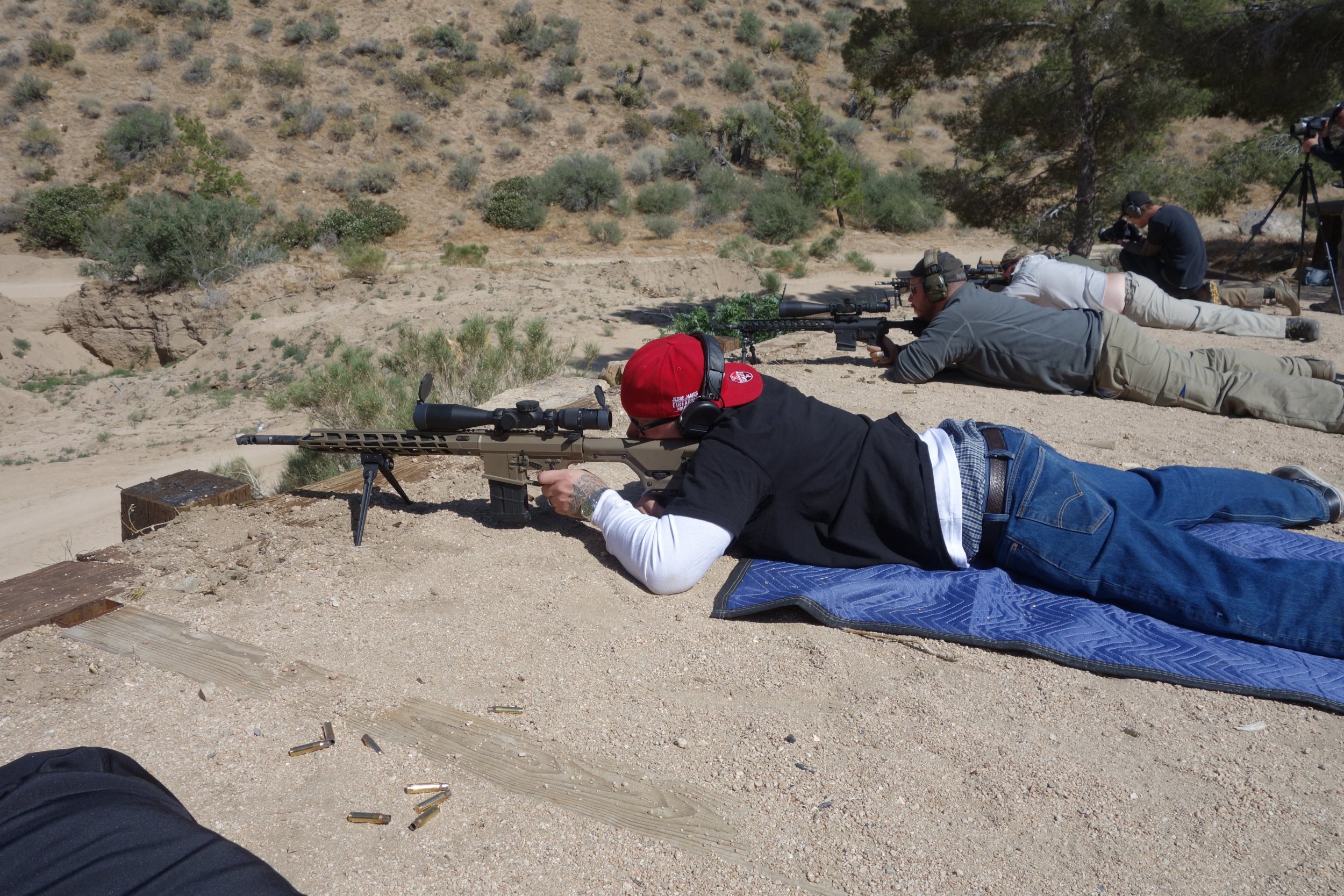 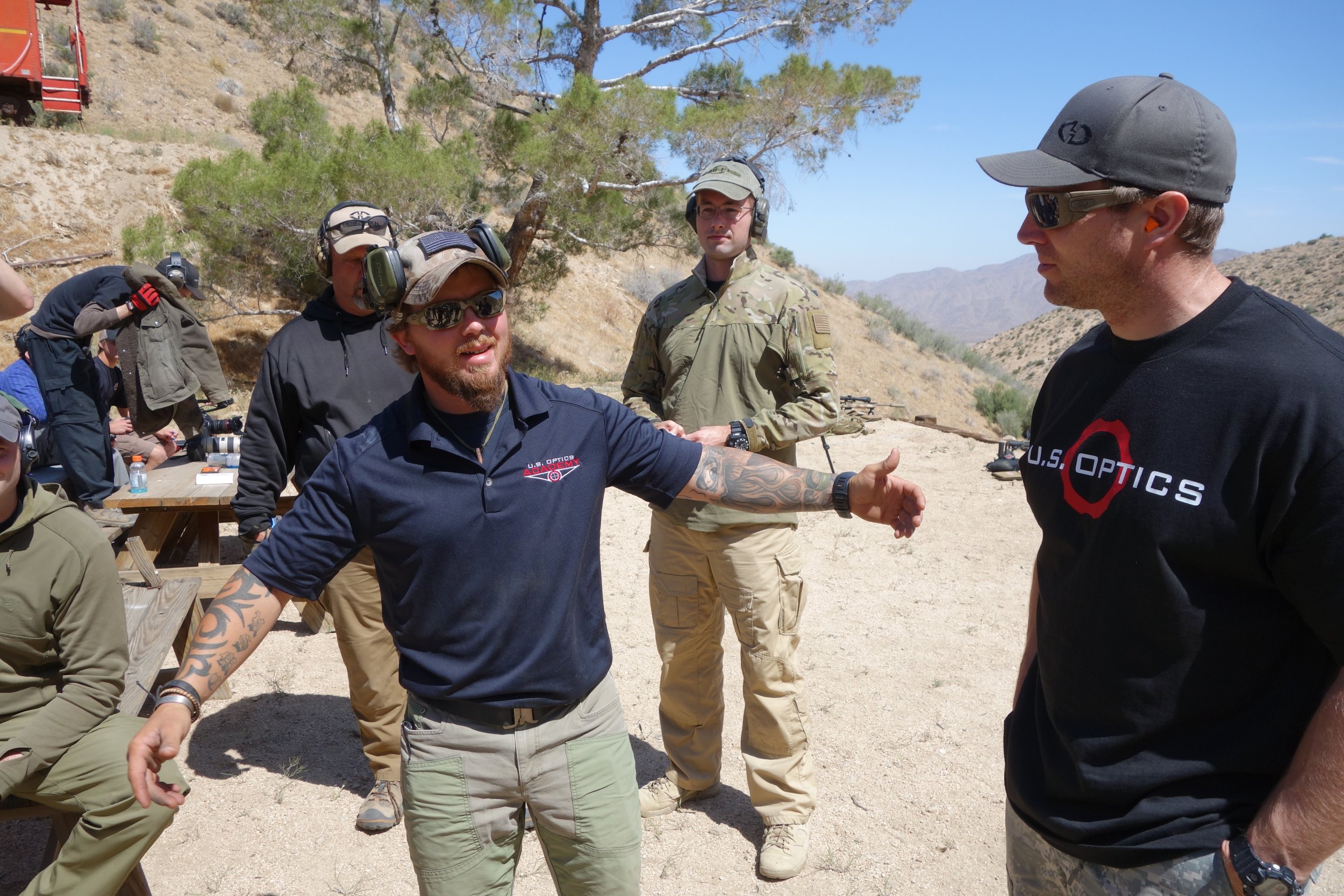 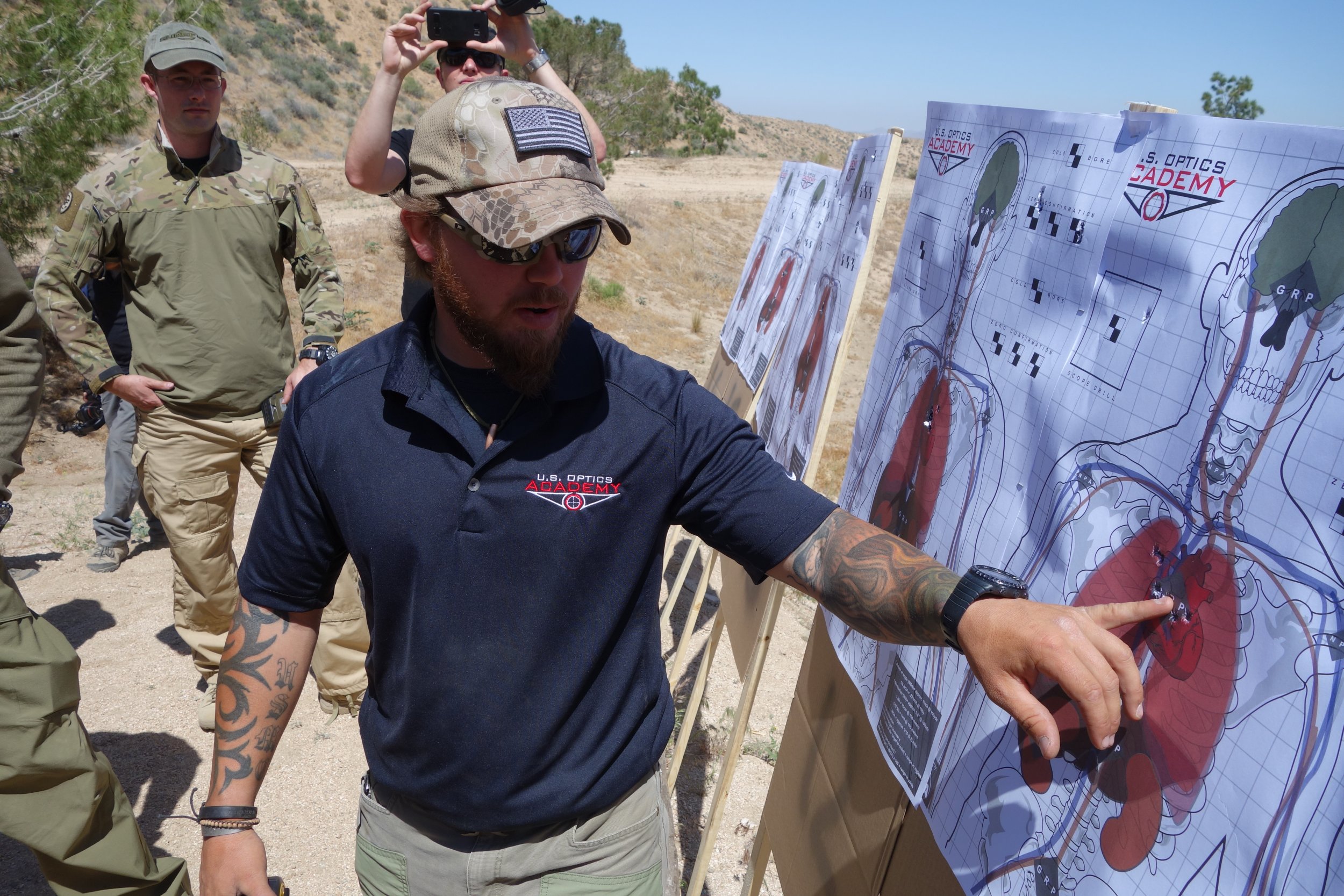 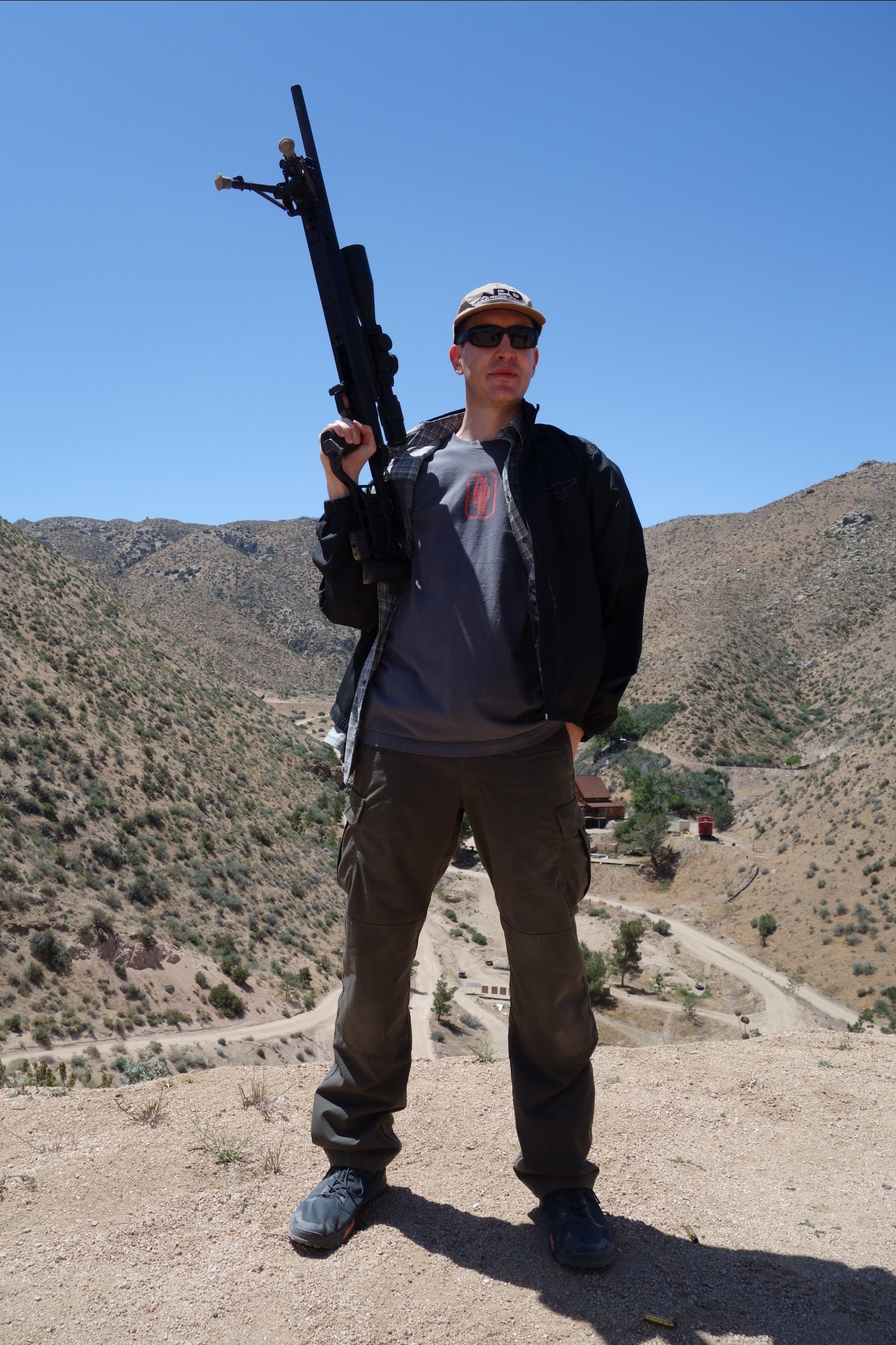 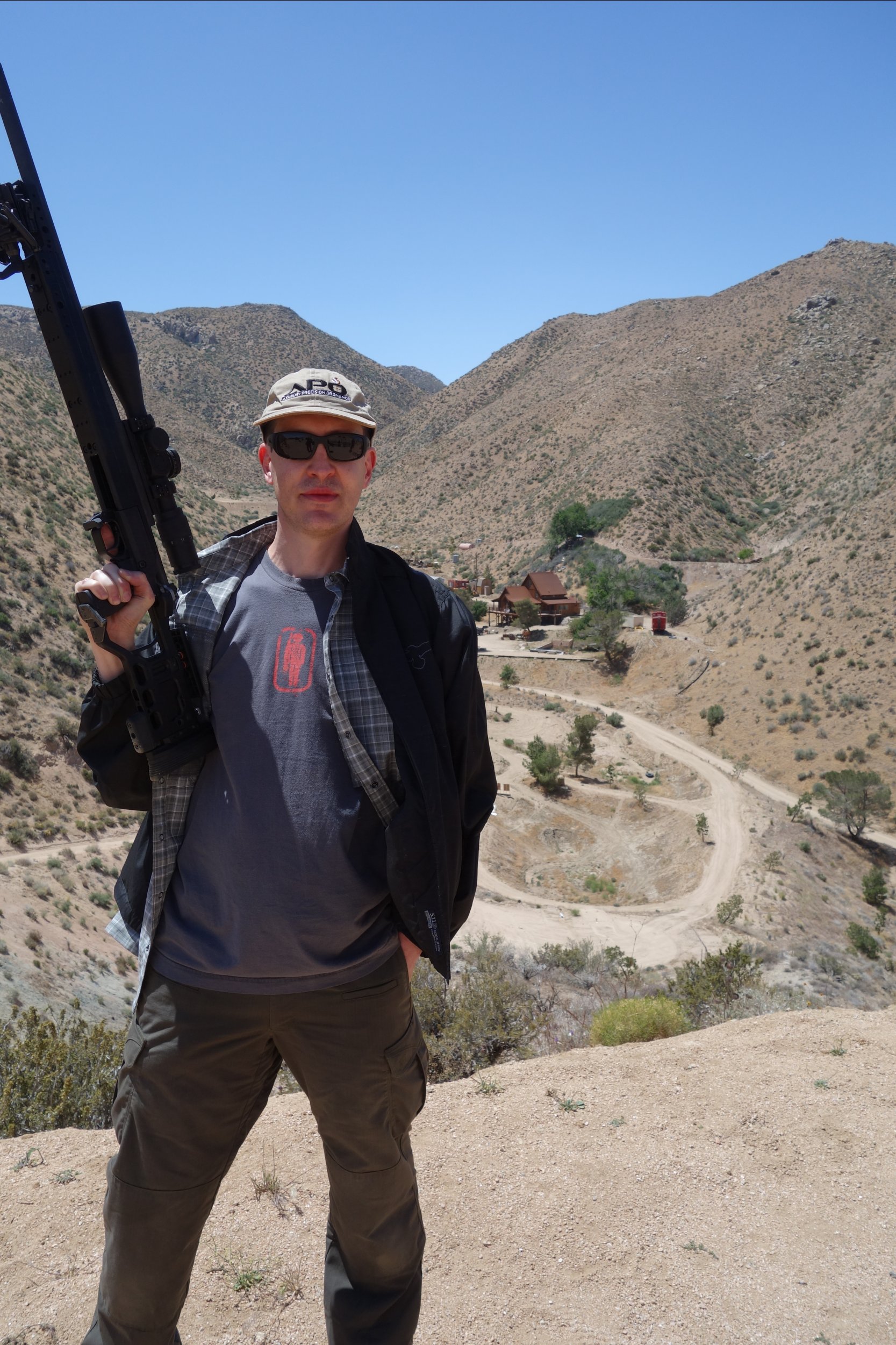 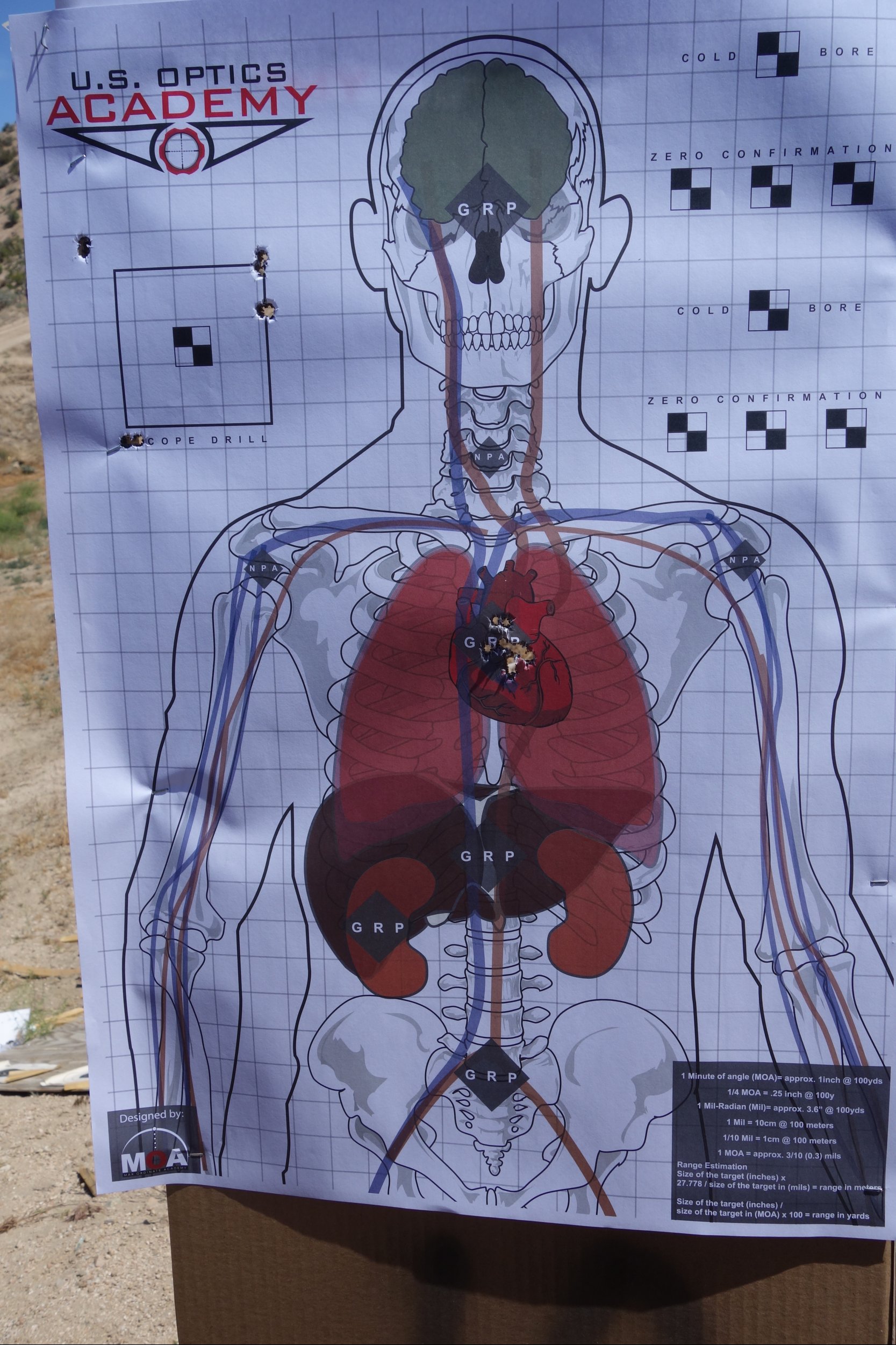 David Crane started publishing online in 2001. Since that time, governments, military organizations, Special Operators (i.e. professional trigger pullers), agencies, and civilian tactical shooters the world over have come to depend on Defense Review as the authoritative source of news and information on "the latest and greatest" in the field of military defense and tactical technology and hardware, including tactical firearms, ammunition, equipment, gear, and training.
Previous DR’s Back. Fresh Articles on the Way.
Next JJFU Aero-Sonic Suppressor 5.56mm Silencer/Sound Suppressor by Jesse James Firearms Unlimted for Tactical AR Rifle/Carbine/SBR’s: Meet the Silent (Metal) Squash of Death