During the prototype development and testing and evaluation of the Desert Tactical Arms (DTA) Stealth Recon Scout (SRS) modular bullpup sniper/anti-materiel rifle system, several configurations of a shorter variant of the rifle were conceived. It became necessary to develop a DTA rifle that could adequately address multiple real life scenarios that would require an extremely accurate, reliable, compact, suppressed or unsuppressed version of the SRS for special applications. These discussions were the beginning of what is now a remarkable production rifle offered by Desert Tactical Arms, the SRS Covert.

Whether you are watching a shooter pick a DTA SRS Covert .308 Win. Conversion Kit rifle up off a weapon rack in an armory, the floor or ground of a firing position, the tailgate of a pickup or from a demo table, the urge to grin along with a cunning gaze overcome all who handle it.

When the Covert is readied, it is as familiar and ergonomic as a short barreled M4 or Mk18. The accuracy of a 16″ barrel bolt gun, the overall length of an MP5 A3, with the additional capability and power of the .308 Win (7.62 x 51 mm). A six round magazine capacity and all the mission specific ammunition readily available for the cartridge, the Covert is unmatched in a class it’s developers have created.

Three Covert barrels taken from the first production run, produced the following three shot groups and a forth single shot on a target to verify zero at 100 yards for the barrel we chose to take to the range. 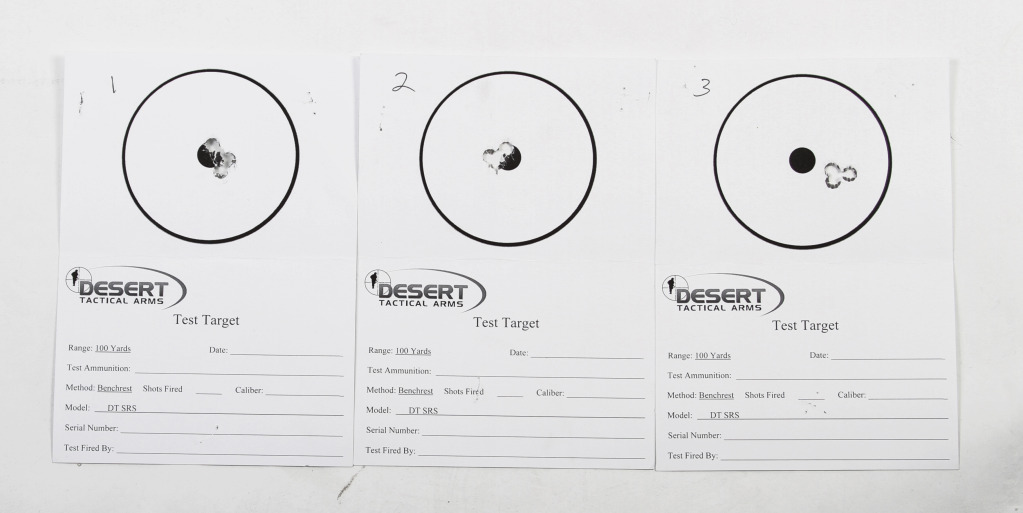 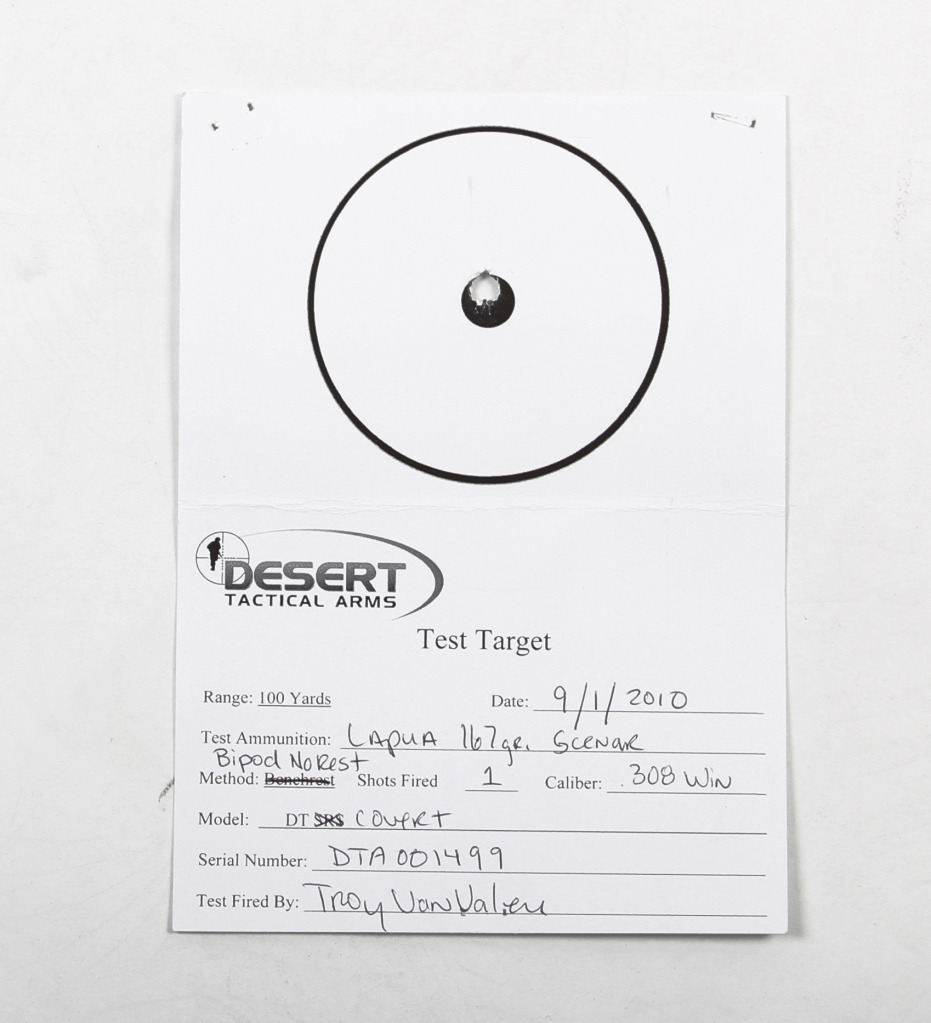 Total round count on barrel when we started the test was six. Our intention was to get a couple hits on steel at 600, 800 and 1000 yards, then shoot groups on paper targets at those same ranges to measure the groups maximum spread and vertical dispersion. We would photograph the groups progression and account for each shot during the shoot.

Total shots fired during two days was eighty seven rounds. Including twenty one rounds of seven types of factory ammunition we chronographed for the iPhone App: “Ballistic: Field Tactical Edition” ballistic computer program. Using this program, the first shot at 1000 yards was about .25 Mil off. We choose the 167 grain Lapua Scenar for the recorded groups.

The vertical dispersion was most impressive at 800 yards. Nine of ten shots within four inches. 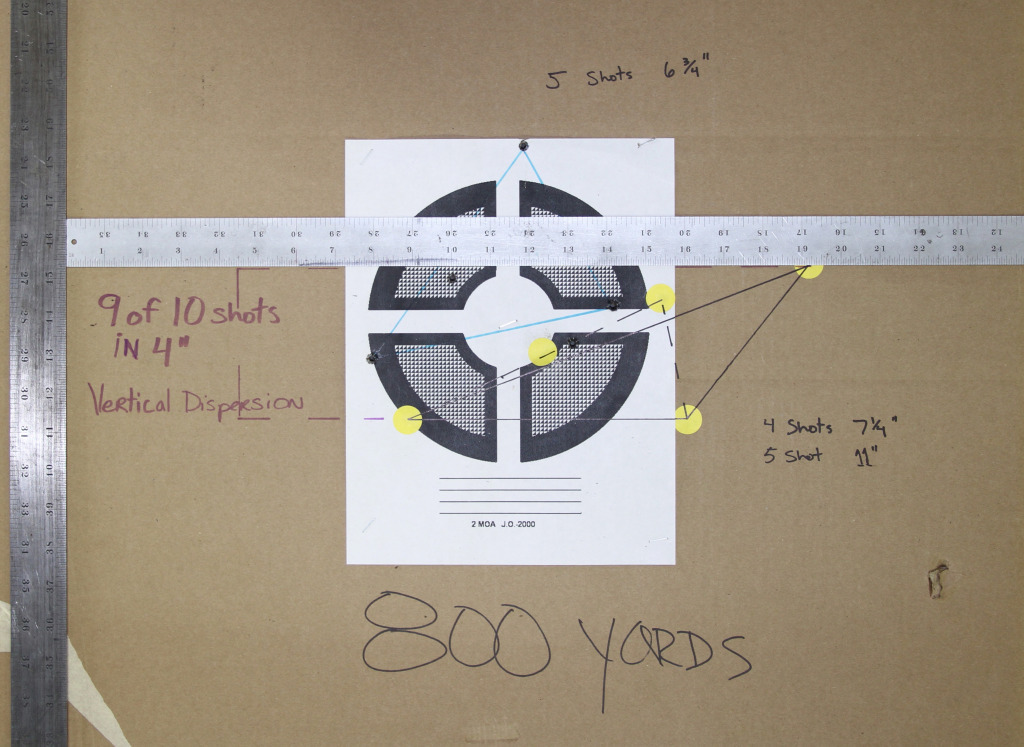 Sixteen of twenty shots within ten and a half inches at a thousand yards was almost as surprising. 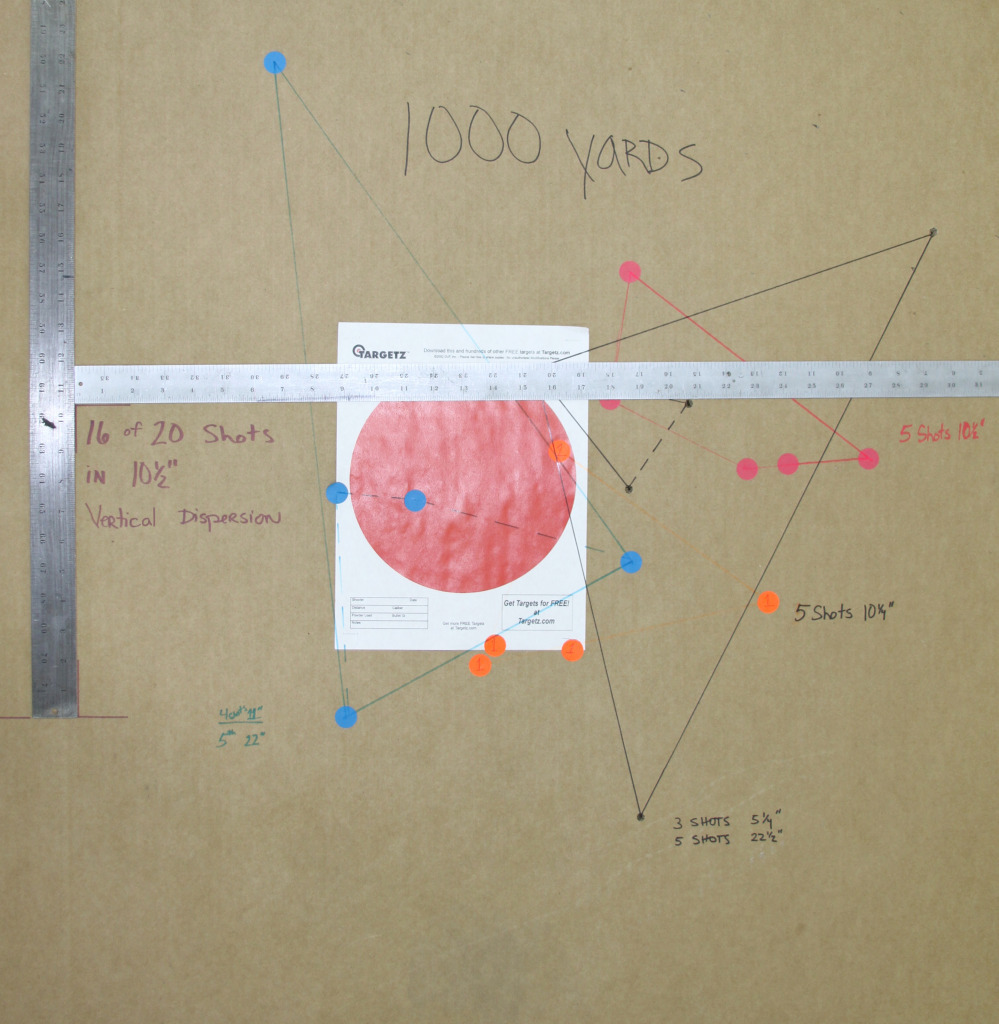 Groups were measured by largest spread, vertical dispersion and some smaller clusters in the groups were noted.

Five pounds lighter, more then six and a half inches shorter then bolt action and semi-auto platforms with 16″ barrels. The SRS Covert’s size is better compared with an MP5 then other .308 Win (7.62 x 51 mm) caliber rifles systems. 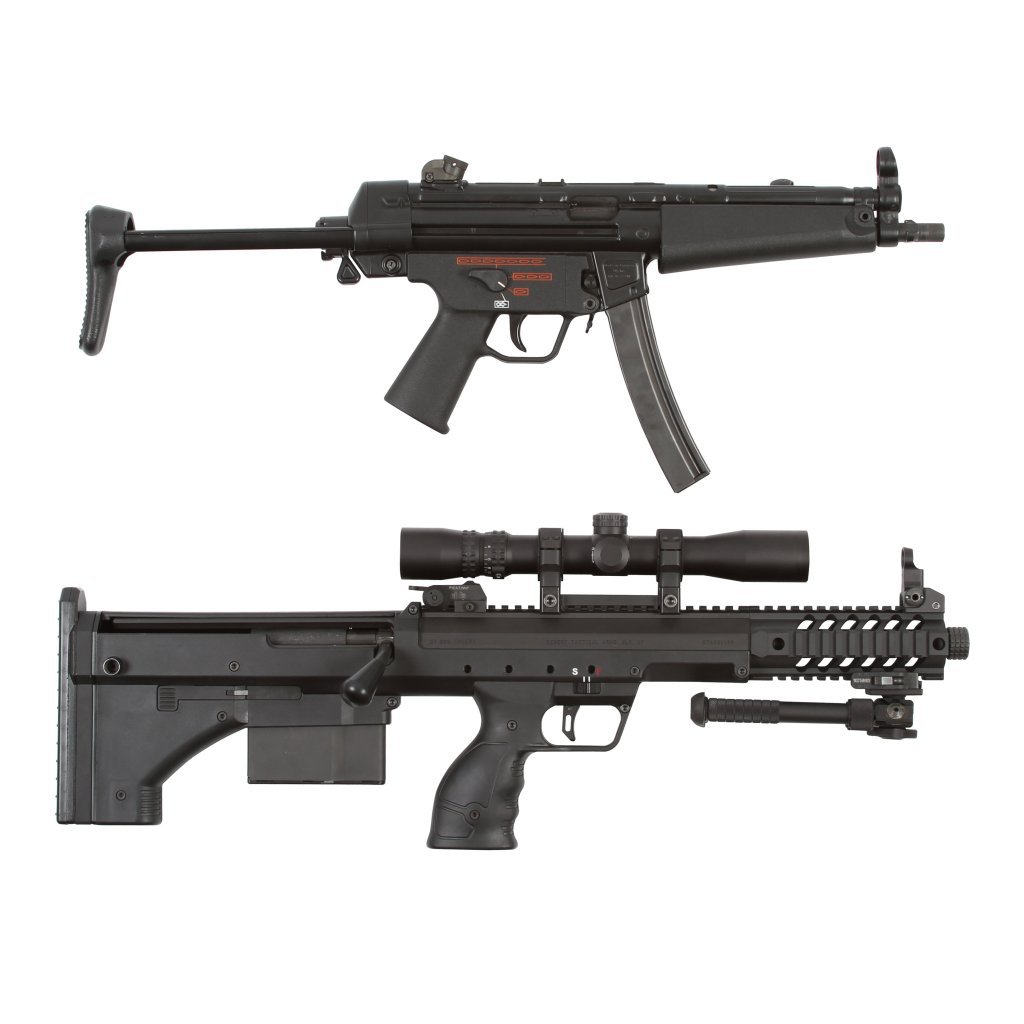 The option of caliber conversion with solid return to zero for each previously zeroed barrel, a design that maximizes operator mobility in and out of vehicles, buildings, confined spaces and firing positions, puts the Desert Tactical Arms .308 Win Covert in a class by itself. 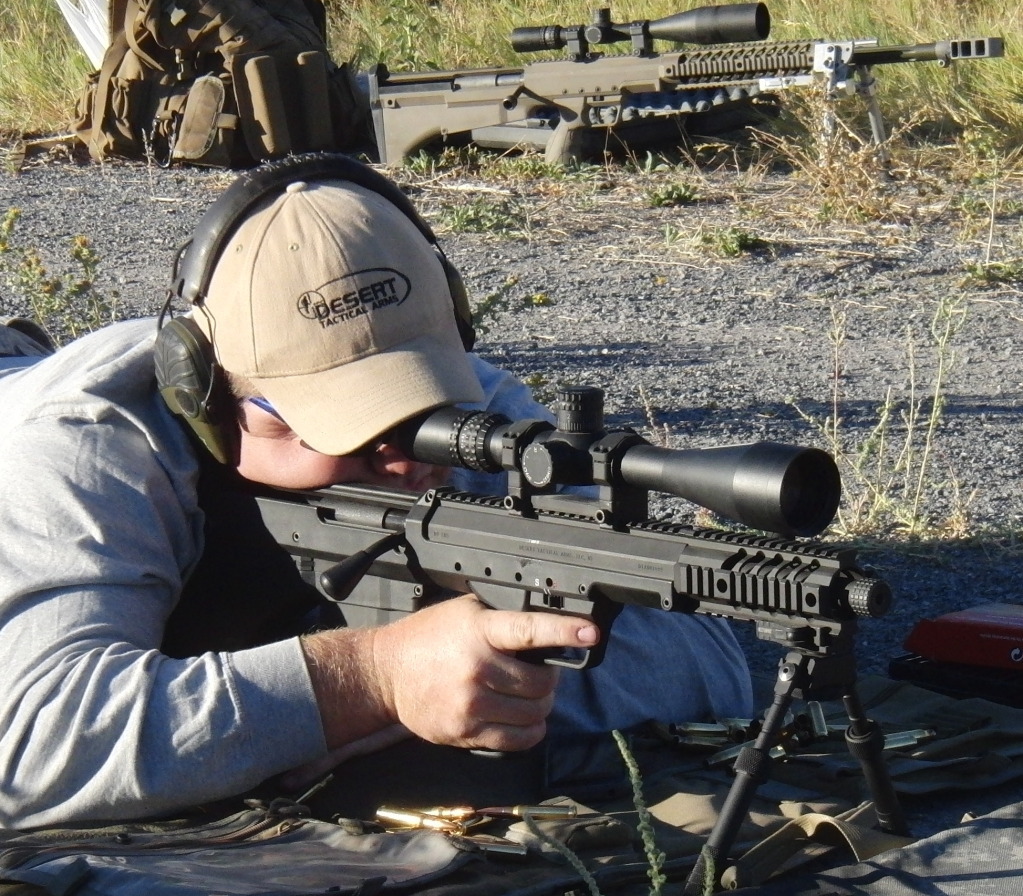 With the exception of the ejection port, the operating mechanisms are completely encased in the stock, eliminating the need for any bedding interface. The magazines have a shoulder retention feature that prevents projectile tips from contacting the front of the magazine during recoil. The four inch internal magazine length allows longer, heavier projectiles, like the .338 Lapua Magnum to be loaded out further then any other magazine available. With the correct powder for the projectile weight and room for more of it, velocity increases are substantial and maximize the cartridges potential.

Desert Tactical Arms, Freedom Gunworks, Inc. and a few talented customers have developed prototype configurations for use with both full value and subsonic ammunition. Specific barrel twist rates to optimize projectile stability, calibers from 6mm to .338 as well as a suppressed 12.7 x 48 mm (.510) are yet another benefit of the receiver designed for caliber conversions.

The average velocities from the limited shots of several factory ammunitions we chronographed from the 16″ barrel were as follows: 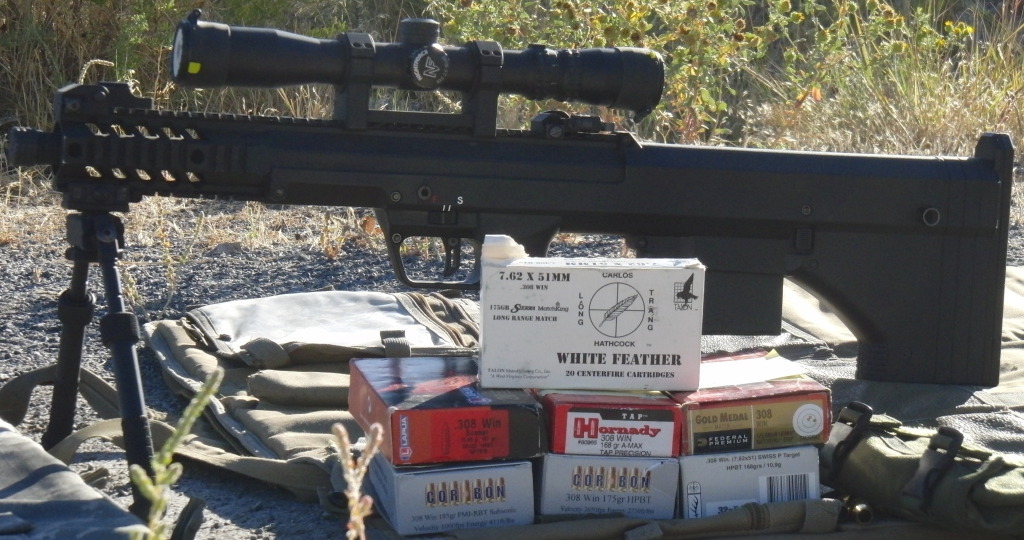 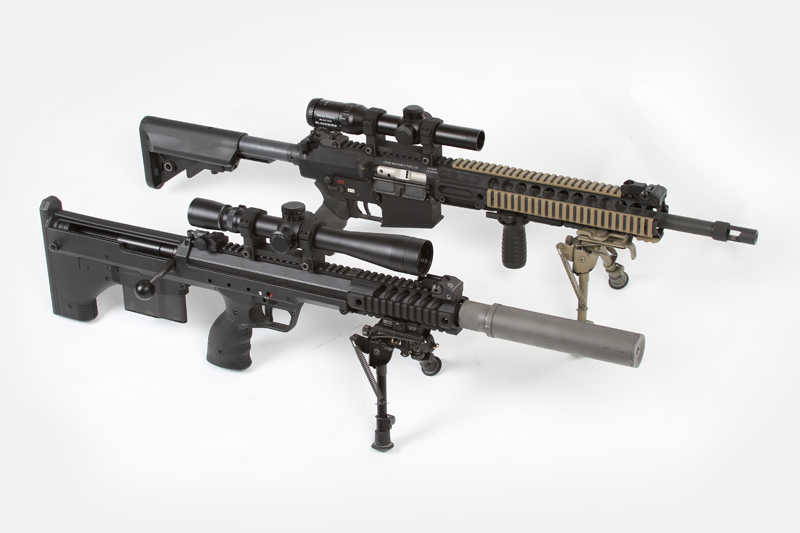 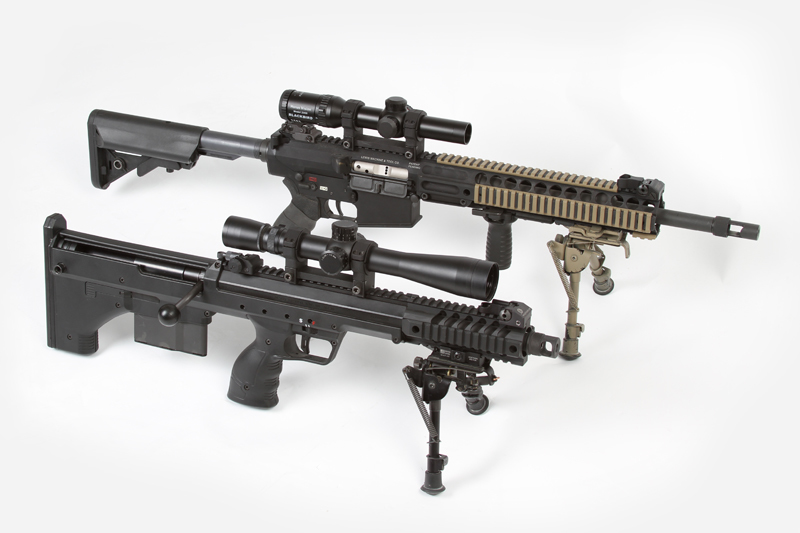