Let me start out by saying that I’m an unabashed fan of assault rifle/small arms systems that provide relatively long barrel lengths in compact packages. Troops in the Afghan and Iraqi theaters of operation want agile shoulder weapons that they can fight from vehicles with, clear buildings and rooms and at the same time deal effectively with the enemy at 500 yards. Those not educated on small arms don’t realize that when you chop barrels down to carbine and submachine gun lengths, you surrender some range and terminal performance particularly with light, high velocity bullets. This is particularly true of the SOPMOD M4/M4A1 Carbine (5.56x45mm), whose 14.5 inch barrel propelling the M855, 62-grain, green tipped, ball round rarely causes its bullet to fragment beyond 100 yards. While some success has been reported in full sized, 20-inch-barreled rifles and interestingly with subcarbines/SBRs (Short-Barreled Rifles)–sometimes referred-to as "mini-carbines" or "micro-carbines"–and heavier bullets, the current issue M16 round has been found generally wanting. Nevertheless, the overloaded infantry still wants smaller and lighter weaponry without loss of combat effectiveness.

Bullpup seems to be a dirty word our military’s lexicon in spite of the fact that a number of foreign countries with respected weapons manufacturing capabilities have developed and adopted rifles with breech behind the trigger group systems. This "bullpup" configuration provides the shooter with a… 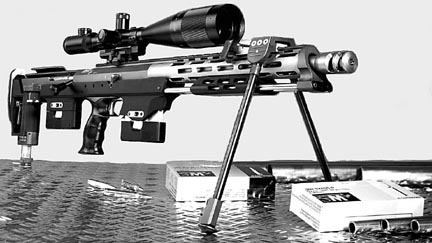 compact chassis with optimum barrel lengths and reduced overall dimensions. Countries like the UK, France, Singapore, Austria, Australia, Israel and now China have put their faiths into this design. While working for Israel Military Industries (IMI) as their North American Law Enforcement consultant, I fired and handled their Tavor Assault Rifle-21 (a.k.a. TAR-21 bullpup assault rifle) extensively and found it to be superior to our current system. Poor and misguided marketing, plus other obstacles and prejudices toward its design prevented the gun from establishing a presence in this country as the UZI did in the past.

Way back, when I trained with GSG9 (Grenzschutzgruppe 9) in St. Augustin, Germany then Colonel Ulrich Wegener and his boys introduced us to their conventionally configured, but very sophisticated Mauser 66 sniper system. Thirty years ago, Wegener, now a retired Border Guard general told our ten nation special police and military forces contingent that the rifles and optics cost more than $4000.00 per copy and they had many. While there, we saw an early version of the Austrian Steyr AUG and upon shouldering it I was immediately impressed with its feel and fast target to target acquisition. Eventually we obtained one for our gun vault and I used it in three-gun competition after I got one of the gunsmiths to put a screw through the trigger to prevent it from going full auto. 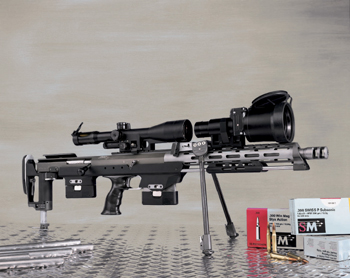 Well, that was then and this is now–and the Germans have finally gotten into the Bullpup act by creating the ultra modern DSR No.1 Sniper System (or, DSR-1 Sniper System). "DSR-1" stands for "Defensive Sniper Rifle 1". The trio of DSR-1 long guns are available in .308 Winchester supersonic and subsonic, .300 and .338 Winchester magnums, AMP Technical Services of Oberndorf, Germany has literally amped up the art and science of precision, manually operated sniper rifles (excuse the pun). The space aged looking rifle has integrated the most modern amalgamation of Aluminum, steel, titanium, and glass fiber reinforced synthetics for individual parts and assemblies in a successful effort to achieve the lightest package and still maintain the highest possible strength and durability.
Once the basic chassis is acquired changing barrels, bolts and magazines can easily change calibers to suit mission requirements. The barrel locks into a barrel extension. Bolt and magazine well are located behind the trigger assembly with spare 4-5 round magazine ensconced in a recess forward of trigger guard. Starting with the fully adjustable butt for length of pull, butt plate position and adjustable cheek piece, ergonomically the shooter’s shoulder is placed directly in live with the bore. Recoil is directed straight to the rear and with the dual chambered muzzle brake shot to shot recovery time should be minimized. The smooth functioning bolt can be rapidly and intuitively operated with the knife – edge of the firing hand as if bringing the hand back to touch one’s eye. The firing / reloading cycle would be: 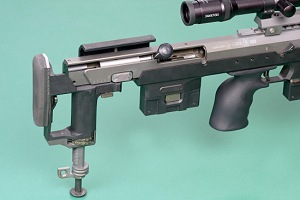 The receiver is fashioned from high strength aluminum and features an ambidextrous three – position safety. Safe – lever is to rear. Fire – lever is forward. Its two stage skeletonized trigger is adjustable and the ergonomic pistol grip resembles those on the latest iterations of the M16 family of assault weapons systems. Forward of the receiver, you will find a vented, adjustable fore – end and full length barrel shroud similarly opened for air – cooling. This open profile will allow maximum cooling and mirage reduction while protecting the end users hands. The muzzle brake is of the dual chamber, bilateral venting type and as specified earlier can be replaced by a suppressor in .308 Winchester only.
Other features include fore and aft, left side sling swivels, modular structure and day / night / optical systems, such as the Hensoldt NSZ 80. Additional equipment consists of camo barrel cover, transport / protective case, marksman bag, carrying sling and cleaning kit. Carrying bag will deploy as shooting mat. With a inch barrel overall length is only 39 inches.
DSR No. 1 Bullpup Sniper Rifle Specifications:
.308 Win/7.62x51mm .300 Win. Mag. .338 Lapua Mag.
* Bbl length 25.61” 25.61” 25.61”-29.55”
* OAL 39.4” 39.4” 39.4”-43.34”
* Wt. 13 lbs 13 lbs 13 lbs
* Magazine 5 rounds 4 rounds 4 rounds
By comparison, the FN A3 G SPR .308 Winchester rifle, which was acquired by the FBI this year, weighs 14.3 pounds, has a 24-inch barrel, but its overall length is 45 inches. Weight and length savings between the two configurations may not seem to be much–2 to 4 inches in length and a little over a pound in weight, but when you are packing 60 -100 pounds of gear, as well, every ounce you can cut helps.
If you’d like to receive more information about the DSR-1 Bullpup Precision Sniper Rifle, you can contact AMP Technical Services by phone at +49 7423 8627654, or by fax at +49 7423 8627655. Or, you can email them at [email protected].
AMP Technical Services also appears to be an authorized European distributor for CHEYTAC Weapons Systems, including the .408 CHEYTAC.
DSR-1 Bullpup Sniper System: Compact, Modular and Ultra-Accurate. by David Crane

David Crane started publishing online in 2001. Since that time, governments, military organizations, Special Operators (i.e. professional trigger pullers), agencies, and civilian tactical shooters the world over have come to depend on Defense Review as the authoritative source of news and information on "the latest and greatest" in the field of military defense and tactical technology and hardware, including tactical firearms, ammunition, equipment, gear, and training.
Previous Super Vest! Is this the Next Generation of Soft Body Armor?
Next CamLite vs. MII-Flashcam: Mobile Tactical Video System Showdown