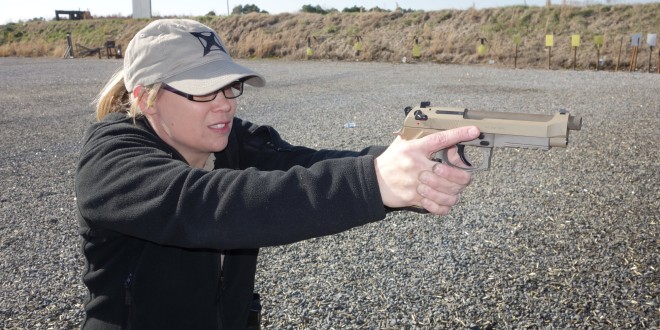 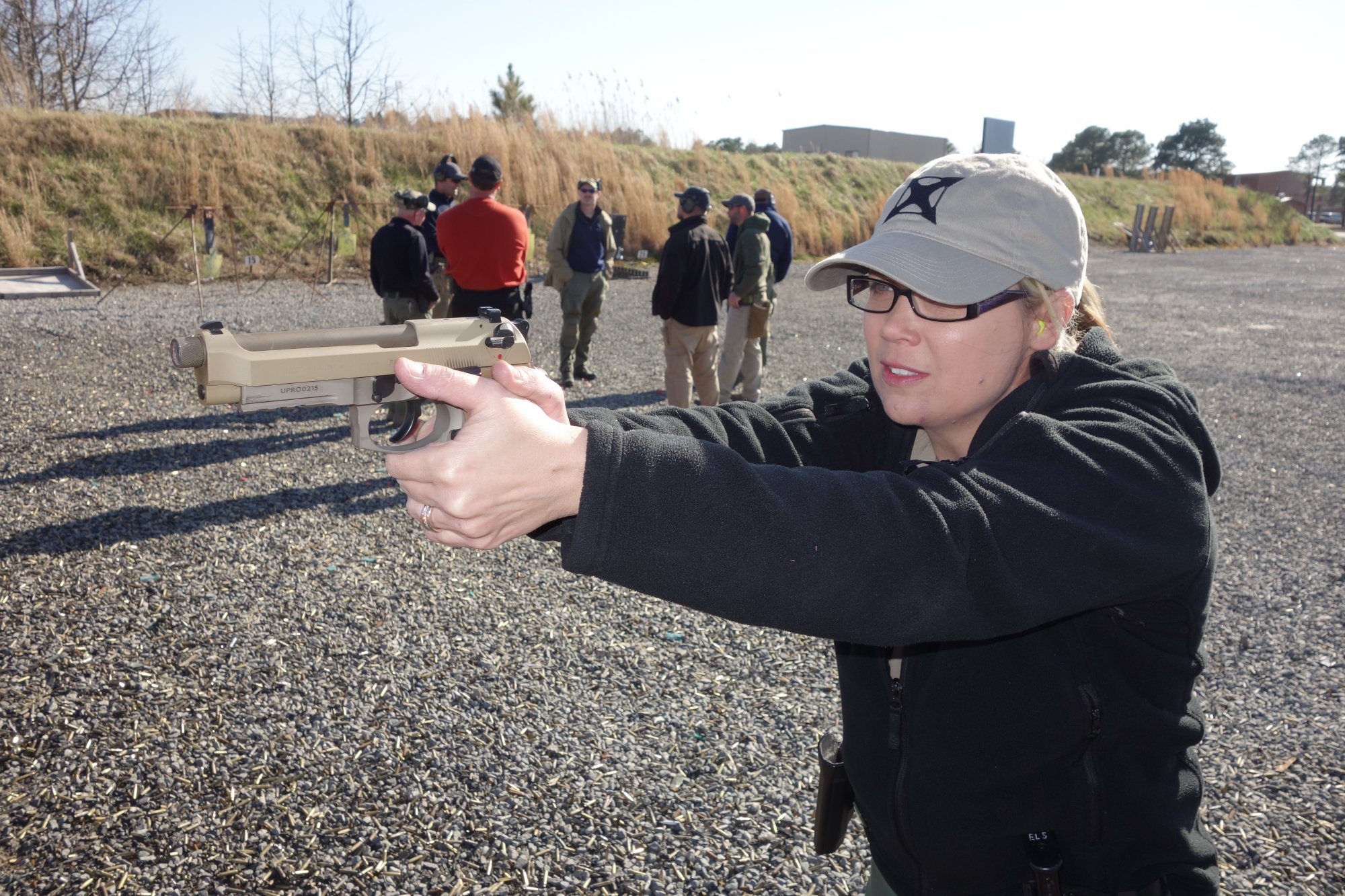 The Beretta APX wasn’t the only Beretta pistol DefenseReview (DR) got to handle at Beretta Tactical Summit 2015. We actually got to shoot the new Beretta M9A3 high-capacity DA/SA semi-auto 9mm (9mm Parabellum/9x19mm NATO) pistol during a combat/tactical pistol shooting class with (awesome) tactical/technical shooting instructor Ernest Langdon. Frankly, we shot the sh*t out of the M9A3, and the gun went “bang” every time…EVERY time. The gun’s a runner. Not only that, but we’re not aware of even one malfunction (failure to feed or eject) with any of the guns in the class. Not one.

Not only that, but Langdon’s class gave us a new appreciation and respect for both DA/SA (Double-Action/Single-Action) pistols in general, and the M9/92FS-series pistols, in particular, as he showed us just how well, accurately and fast a DA/SA pistol, especially a M9/92FS-series pistol, can be shot, even on the first shot, despite its relatively long double-action trigger pull. 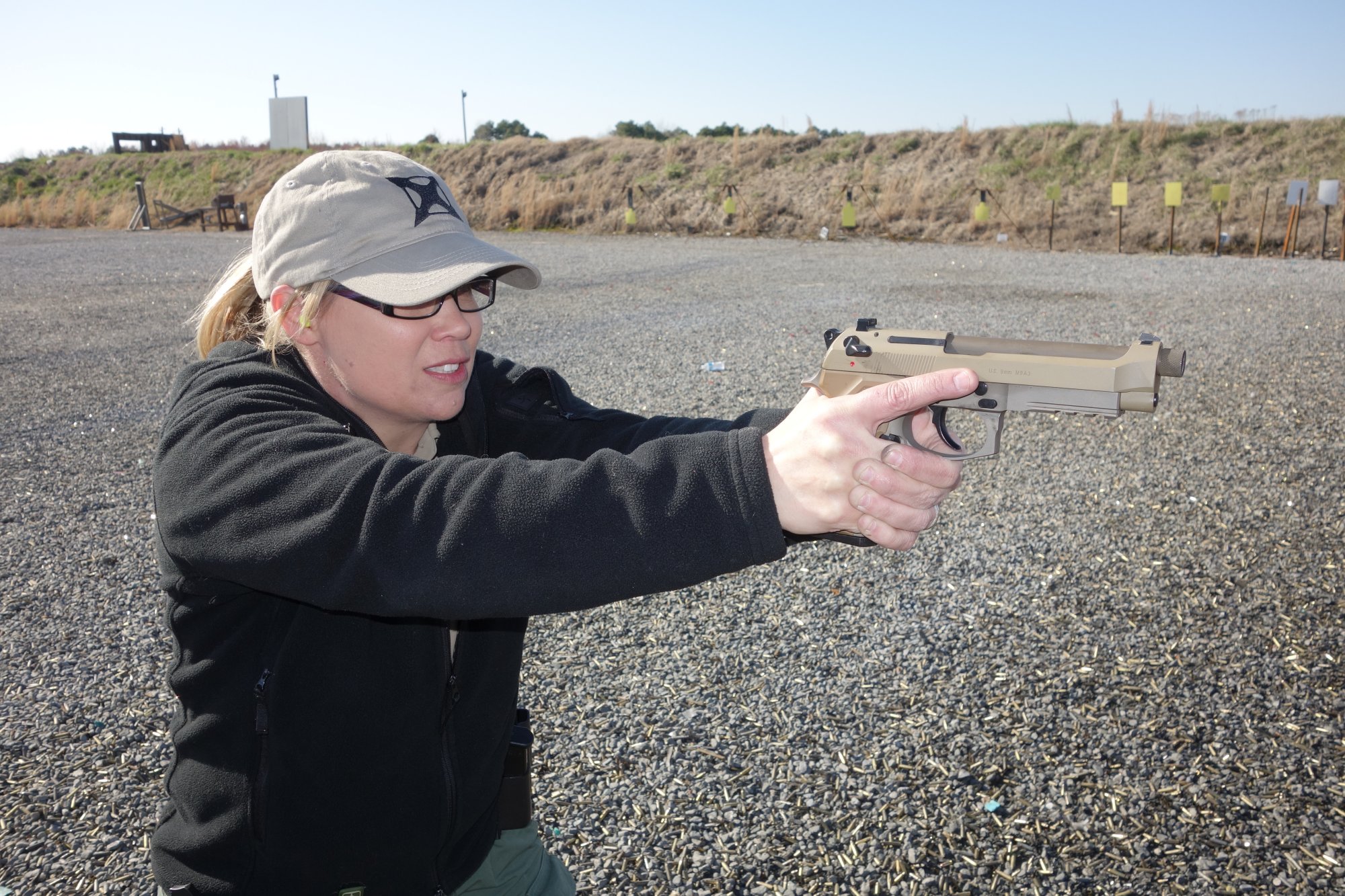 The key to it is practice. One has to practice prepping the double-action trigger as one pushes the gun out, aims at the target, and achieves a proper sight picture. You have to take most-to-all of the slack out of the trigger by the time you acquire a good sight picture, and break the shot AS SOON as that happens. Once you get good at it, you should be just as effective and fast in obtaining an accurate first shot as someone using a Glock pistol (with its “Safe-Action” trigger) or 1911 pistol (with its single-action trigger). It just requires lots of practice, and mucho repetition.

This, of course, took some getting used to, since I, your humble correspondent, have been carrying Glock 19 (G19) “Safe-Action” pistol for a long time. That’s the gun I carry, so that’s the gun I practice with most. Before Langdon’s class, I hadn’t shot a DA/SA pistol in months, and I hadn’t shot one in multi-shot timed drills for YEARS. So, it took Langdon the whole class (several hours) to get me dialed in. But, dial me in he did. By the end of the course, Langdon had me dialed in enough on the M9A3’s DA/SA trigger to achieve a 6.84-second time on the final shooting test, which ended up being the second fastest time in our class, right behind David Fortier’s 6.66 seconds. My ability to achieve that time within a 3-4 hour class using a DA/SA pistol is testament to Langdon’s ability as a shooting instructor. Bottom line: Langdon’s phenomenal, and DR highly recommends him for your next tactical pistol shooting course. 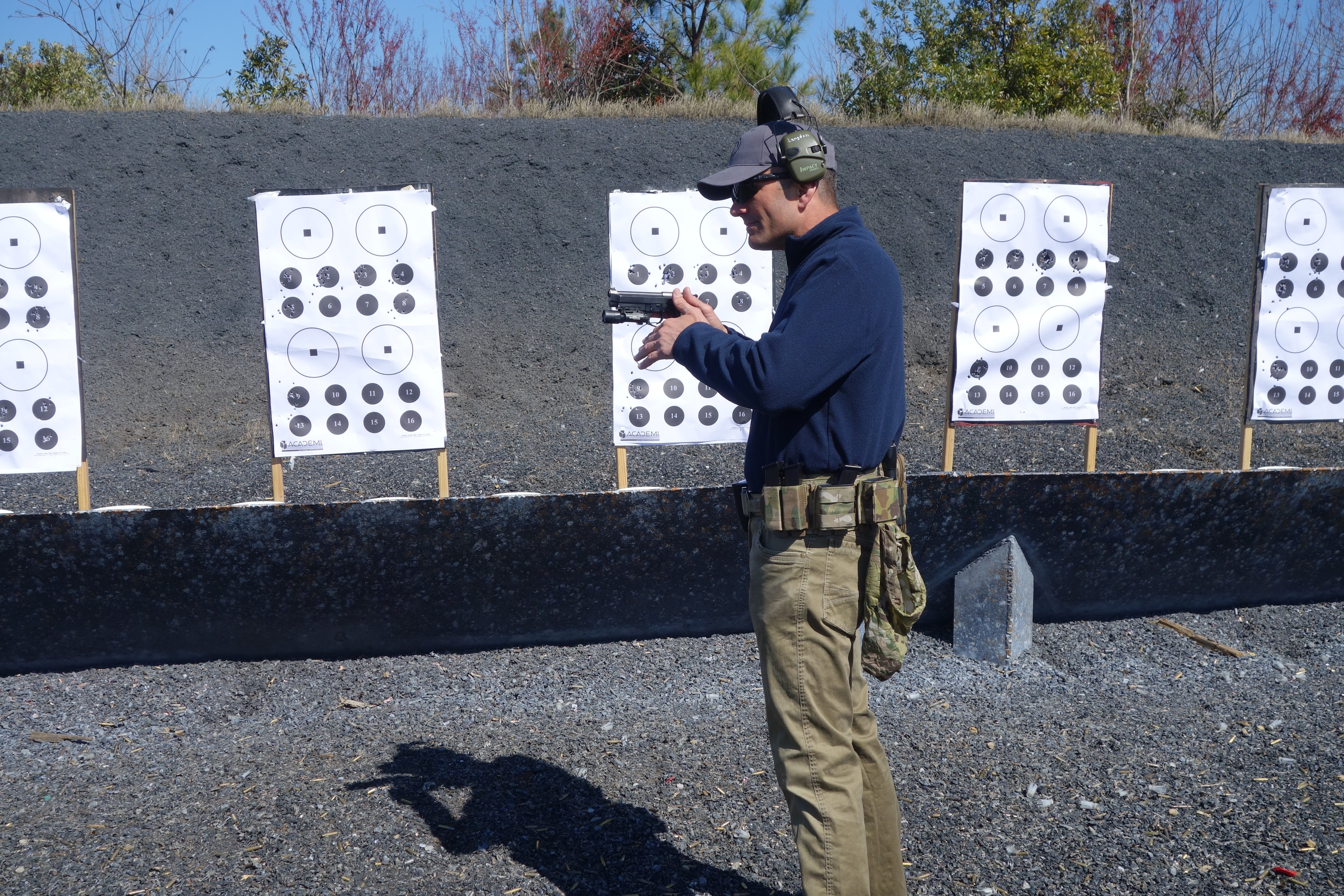 Anyway, for the test, we loaded the gun with five (5) rounds in the magazine, chambered a round, decocked the gun, and held the gun at presentation position (both hands on the gun at the chest). When we heard the timer, we fired five (5) rounds at the one of the large circles on the target (see photo at right), conducted a speed reload, and fired one (1) more shot, all inside the circle. One miss knocked one second off your time, two misses knocked two seconds off, etc. I didn’t miss any shots.

The reason we started from the chest instead of from the holster/draw, is because many of us, including myself, were using retention holsters that weren’t conducive to shooting timed drills. Starting from the chest evened everyone out.

So, what did Defense Review learn, besides the fact that you can be just as fast and effective with a DA/SA pistol as you can with a “Safe-Action” or single-action pistol, as long as you practice with it? We learned that the Beretta M9A3 and the rest of the M9/92FS-series pistols rock. They’re terrific, and reliable. One of the primary keys to the M9/92FS’ death-and-taxes reliability is its unique locking system that keeps the barrel straight and feeds the round directly into the chamber in a straight line, rather than up and in, like in a Browning tilting-barrel lock-up design. Rather than tilting, the Beretta M9/92FS-series pistol’s barrel slides back and forth slightly. The pistol’s second major reliability feature is it’s open-slide design, which provides for 180-degree ejection out of the chamber. Langdon took us through all this in detail, as you can see in the top video below. 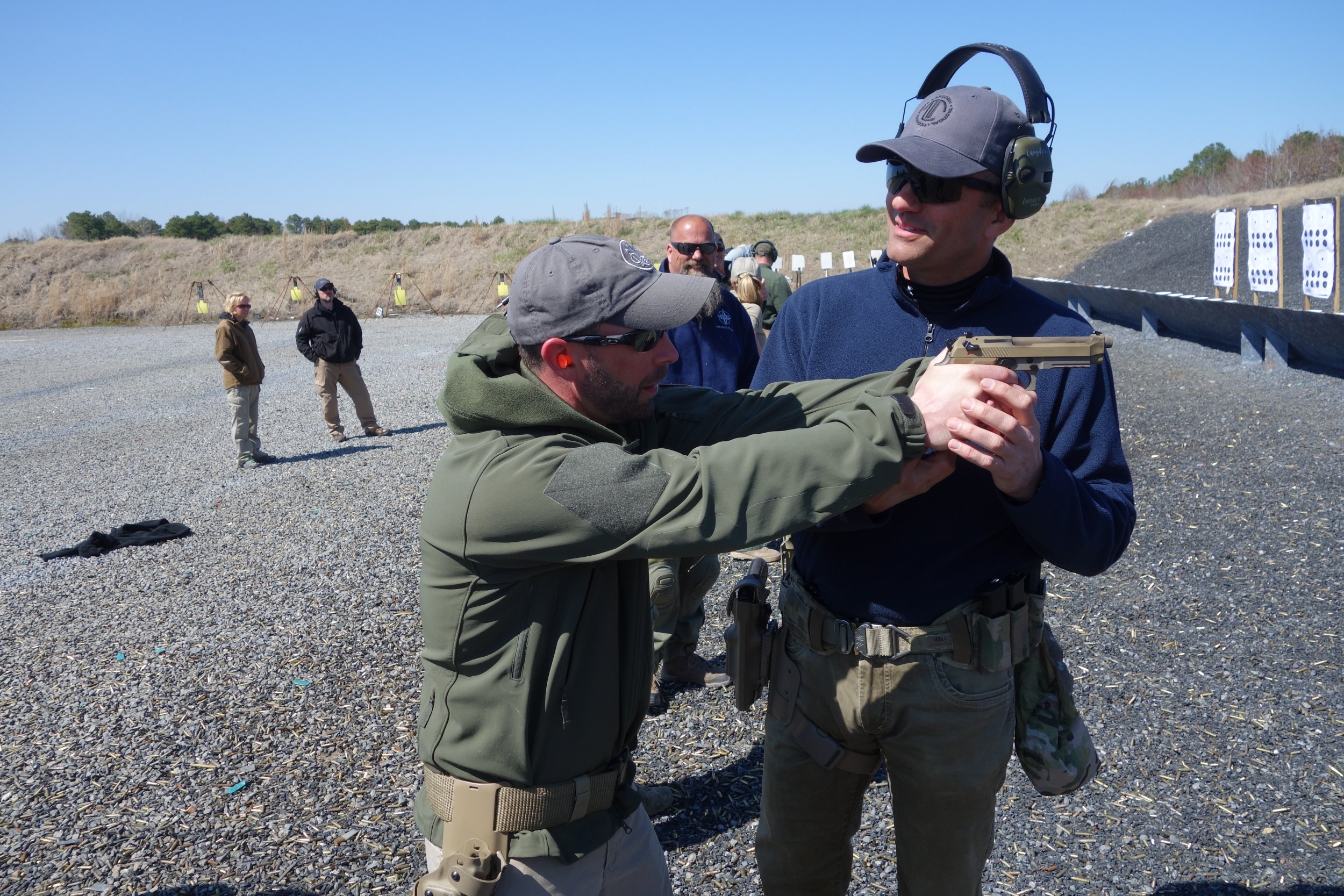 DR also learned that it’s faster and easier to take a Beretta M9/92FS pistol off “Safe” than we previously thought. Langdon showed us that all you have to do is push your thumb straight forward through the lever, rathet than push up on it. That said, Langdon recommends carrying the gun off safe, and relying on proper weapons handling (finger outside the trigger guard until you’re ready to fire) and that long double-action first shot, instead. He also recommends keeping your thumb pressing against the back/top of the hammer while you’re holstering the pistol with the gun off safe, so you can feel if the trigger somehow gets engaged while holstering.

Like Langdon, DR would opt for a Beretta 92G variant if we were to purchase one. The “G” model replaces the safety/decocking lever with a pure decocking lever, making the gun similar to a SIG P226 in manual of arms. 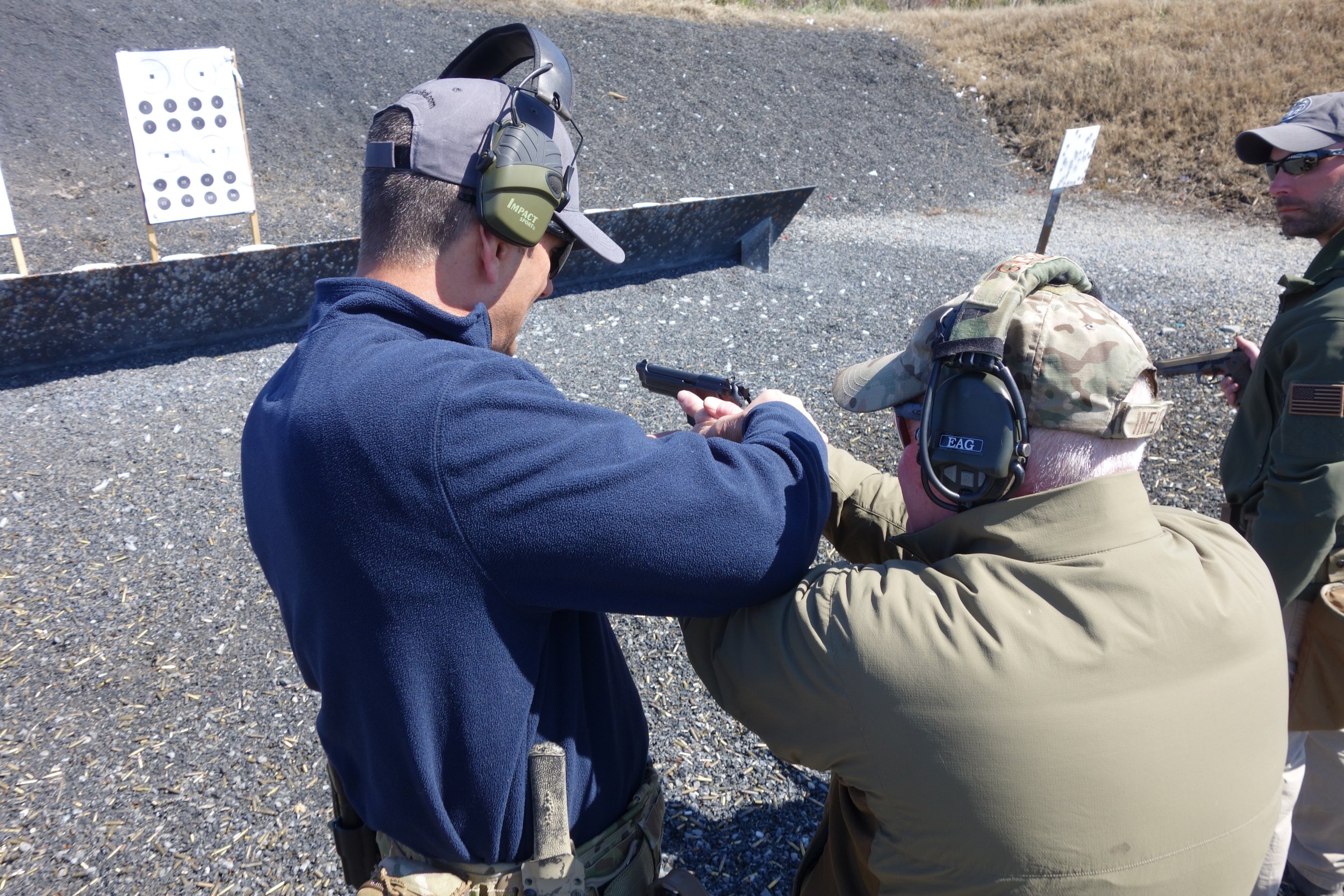 Your humble correspondent didn’t need the M9A3’s smaller grip, but it still worked for us, and we liked its 1911-like grip angle. The gun pointed naturally for us.

The only aspect of the M9A3 that gave us any trouble, once we learned how to properly deal with the safety/decocking lever of course, is the relatively large slide stop/release, which we kept engaging accidentally with our strong-hand thumb, preventing the slide from locking back after the last round in the mag. That was annoying. We had to concentrate on a proper grip and keeping our thumb off that thing. This is why practice with lots of repetition is important. 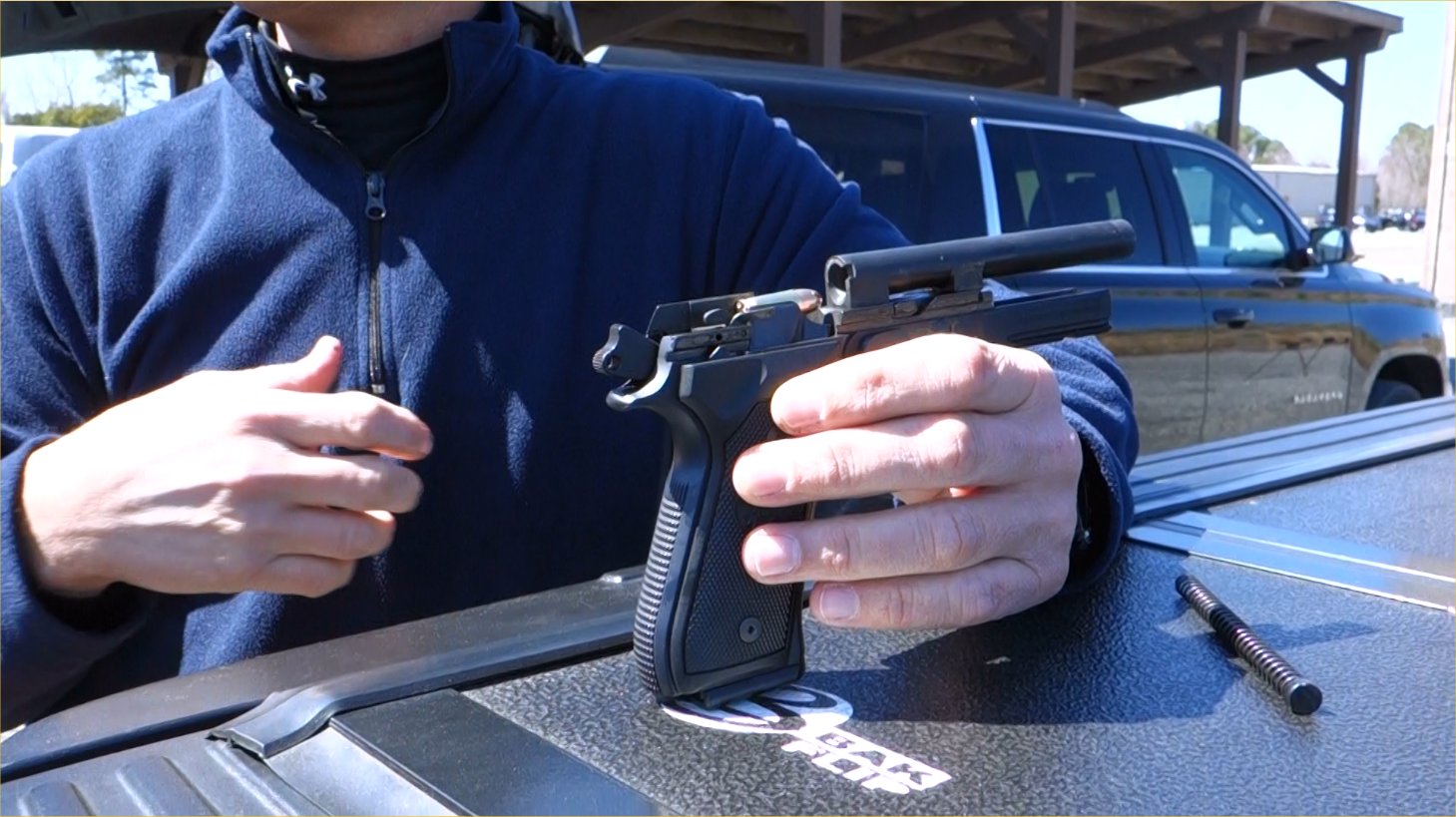 All in all, DR liked the Beretta M9A3 quite a bit, and we trust it. It gets the DR thumbs up. For concealed carry though, we’d prefer a Beretta 92G 9mm with decocking only, and perhaps even a slimmer single-stack version of it with a shorter barrel and slide, if Beretta can maintain the same level of reliability, durability and accuracy (at normal combat distances) as the standard Beretta 92G. The grip would need to remain long enough to get a full grip, though. Now that we’ve received some quality professional instruction on the Beretta M9A3/92FS, we’re very interested in the Beretta/Wilson 92G Brigadier Tactical 9mm pistol package, and view it as a viable concealed carry option, even though it’s a standard double-stack. However, we’d be interested to see how a single-stack version of that gun looks, feels and functions. Hopefully, Wilson Combat and Beretta USA can experiment with it. Perhaps they can develop a customized Beretta/Wilson 92G compact single-stack pistol at some point.

Editor’s Note: Notice the Honeywell Howard Leight Impact Sport Folding Electronic Hearing/Ear Pro (Protection)/Shooting Muffs that Langdon is wearing in the accompanying photos and videos. DR’s hasn’t tried this product yet, but we’re interested in doing so if we can get our hands on a pair for T&E. They look pretty lo-pro (low profile)/slim and lightweight. Interestingly, Langdon was also wearing a Beretta/Wilson customized 92G 9mm pistol and James Williams-designed CRKT Hissatsu fixed-blade combat/tactical tanto knife on his belt (see below). The Hissatsu sports an Osoraku-Zukuri-style tanto blade, and is an excellent choice, provided one is trained in its use. DefenseReview has already published information on the CRKT Hissatsu AND both variants of the the CRKT Otanashi Noh Ken combat/tactical folder, with serrated and non-serrated blades. DR prefers the serrated version. 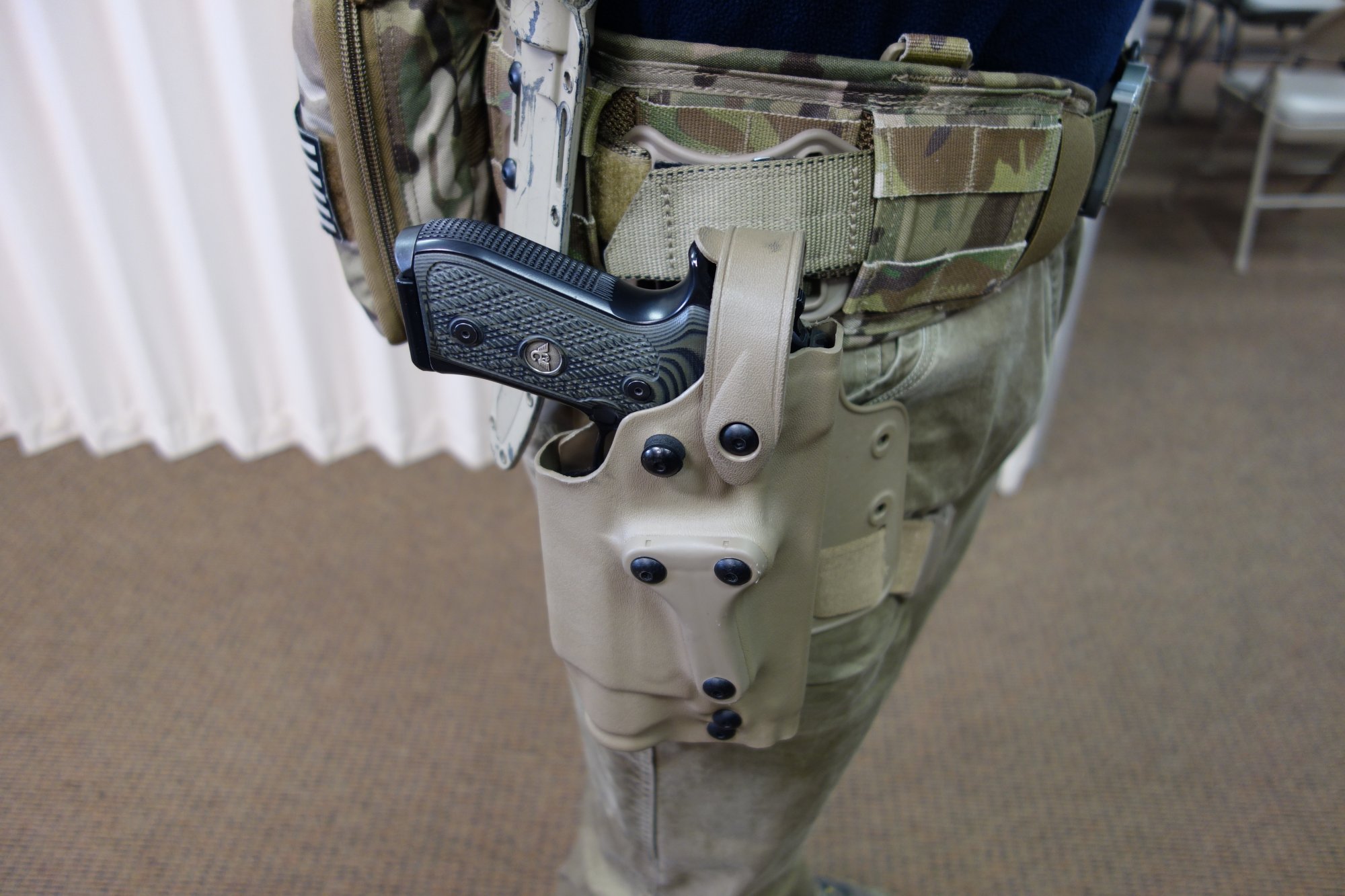 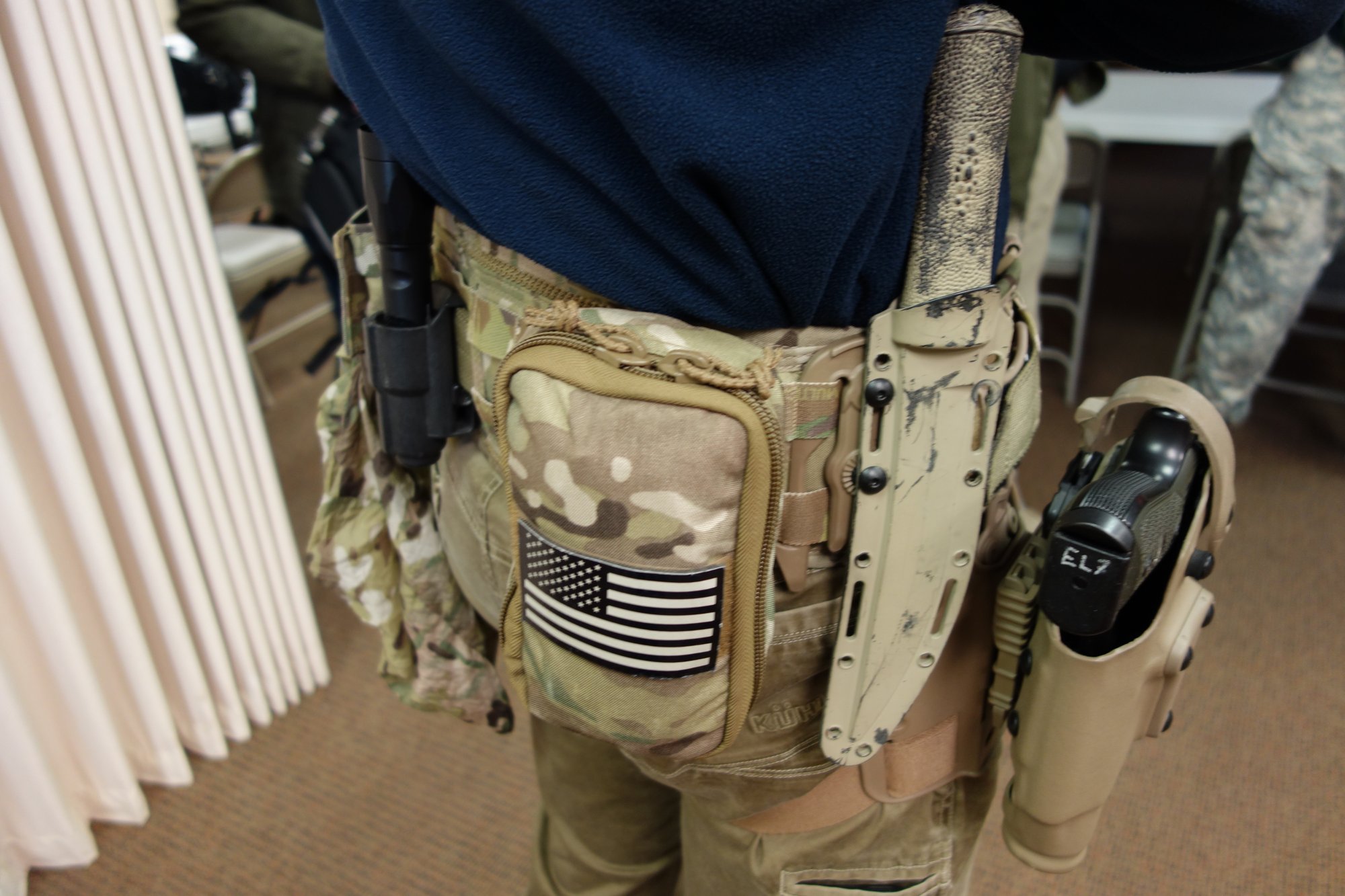 The True Story of the Beretta M9 Pistol.