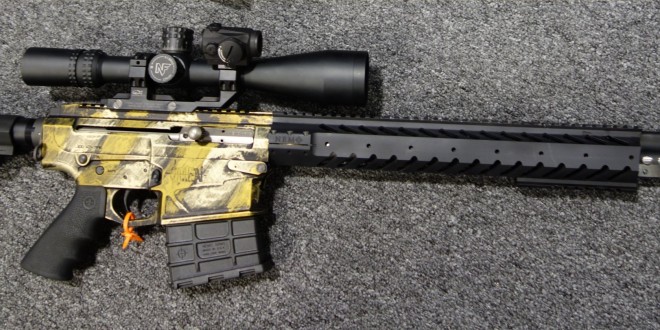 DefenseReview (DR) was REALLY glad to run into the NEMO Arms boys at SHOT Show 2014. Why? Because their guns are BADASS. Those are some seriously baddass blasters they’re makin’ over there. So, what makes them so shit-hot? Where do I start? First, they look really cool. One of the coolest of the bunch is the NEMO Arms Omen Recon .300 Win Mag (.300WM) 18″ Tactical AR Carbine/Rifle, with a collapsed length of 38.25 inches (38.25″) a listed weight of 10 pounds (10 lbs).

The Omen Recon sports custom-cut match-precision-machined 7075-T6 billet upper and lower receivers with NEMO-exclusive Tango Tigerstripe camo (camouflage) coating/finish and texturizing, as well as a QD (Quick-Detach) side charging handle that doubles as a handy takedown pin punch tool. The billet upper receiver connects up with a nice-looking integrated free-float tactical handguards/rail system/forend rail tube via a multi-screw “interlocking feature” that creates a monolithic-type rail system. While not truly monolithic, the end result is roughly the same, with the advantage of being able to swap rail systems as new, better, and/or different rail systems are developed, or your mission profile changes.

On the gun we handled, the rail surrounded and almost completely encompassed an 18-inch (18″) match-grade PROOF Research steel-lined carbon fiber barrel (AR-10) topped off with an effective-looking, and NEMO-exclusive, A-10 Muzzle Brake (Patent Pending) with Nitride finish. The carbon fiber barrel not only gives the shooter .5 MOA accuracy, but it should also lighten the gun up some (in theory), reduce harmonic vibration, enhance durability and heat dissipation, and automatically increase the weapon’s cool factor (although most likely the price, as well).

The NEMO Omen Recon Carbine 18″ looks at first glance like a gas piston/op-rod (push-type operating rod) gun, due to the knob on the front of the NEMO adjustable gas block, but it actually operates via direct gas impingement (DGI), which brings us to the heart of the Omen Recon’s operating system, the Nemo Arms 7.62mm NATO (7.62x51mm NATO)/.308 Win./.300WM Recoil Reduction System bolt carrier group, or NEMO RRS BCG, for short. Sound familiar? It should. Defense Review has been writing about the FERFRANS SOAR SBR’s and DSAS/RRS (Delayed Sear Activation System/Rate Reduction System) BCG at least since 2007, and we’ve even shown comparative video of the DSAS/RRS BCG in action on both full-auto and semi-auto in order to demonstrate its advantages in both fire modes. 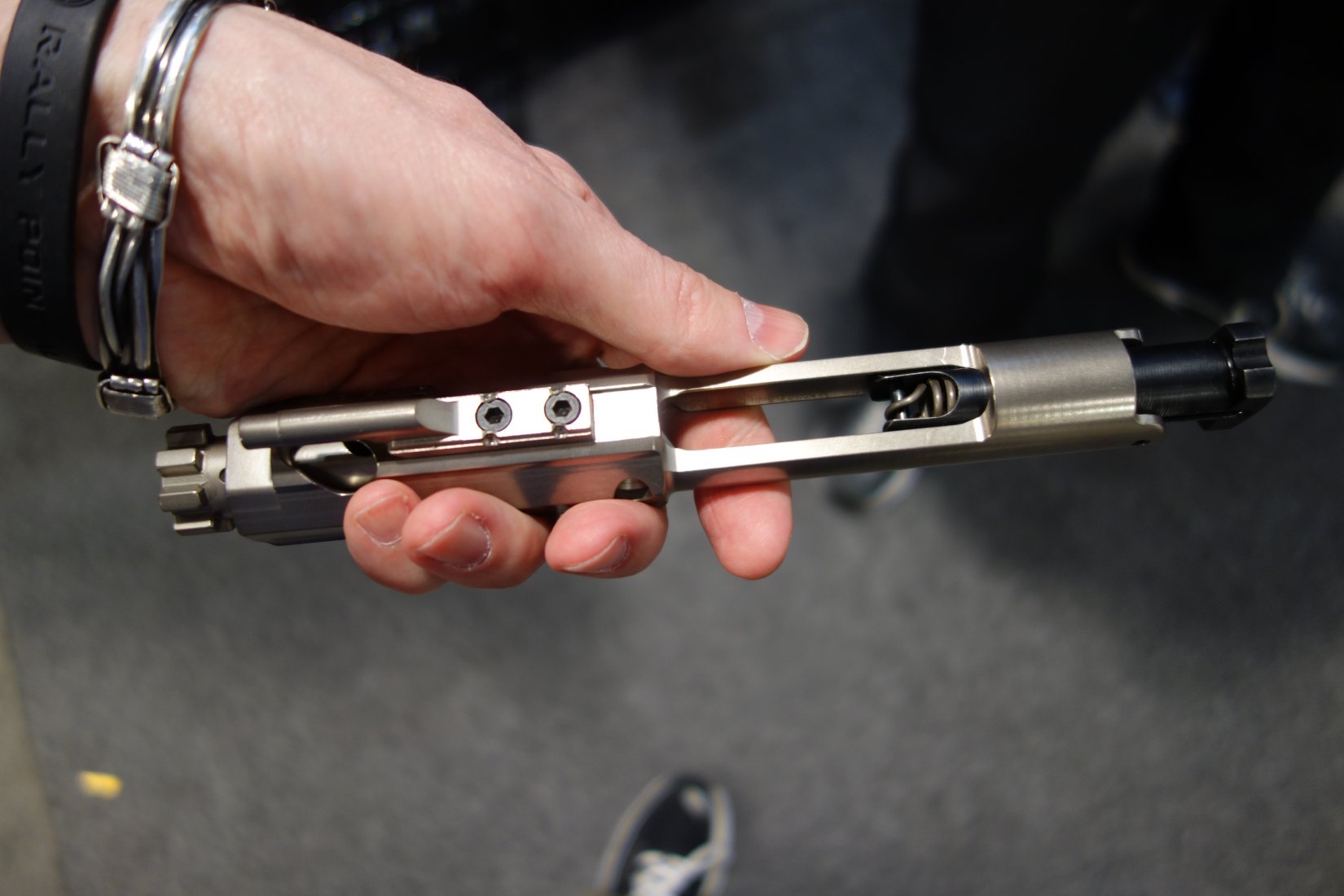 However, the Ferfrans DSAS/RRS BCG is springless, slides back and forth in the BCG under its own weight during recoil, and was designed and developed specifically for select-fire/full-auto 5.56mm NATO (5.56x45mm NATO)/.223 Rem. combat/tactical AR SBR’s (Short Barreled Rifles) and carbines, specifically to reduce their cyclic rate of fire (ROF) and felt-recoil impulse.

The NEMO Arms RRS BCG, by contrast, is a sprung system (recoil reduction device), so it’s non-sliding, and it’s specifically designed to reduce the felt recoil impulse of the .300WM cartridge (or 7.62mm/.308 Win. cartridge) in a semi-auto-only marksman’s/sniper-type AR rifle/carbine, thereby enhancing the weapon’s effectiveness during multiple-shot strings against both stationary and moving targets, presumably at long range. The NEMO RRS BCG is also Nickel-Boron (NiB)-coated for permanent/intrinsic lubricity and enhanced corrosion resistance and durability.

Its Geissele SSA-E Super Semi-Automatic Enhanced) 2-Stage Trigger should only assist with that endeaver. Oh, and the Omen Recon .300WM Carbine utilizes in-house-developed and manufactured 14-round mags, so you’ve got plenty of immediate .300WM firepower with which to hit your target. So, they can run, but they’re just gonna’ die tired. 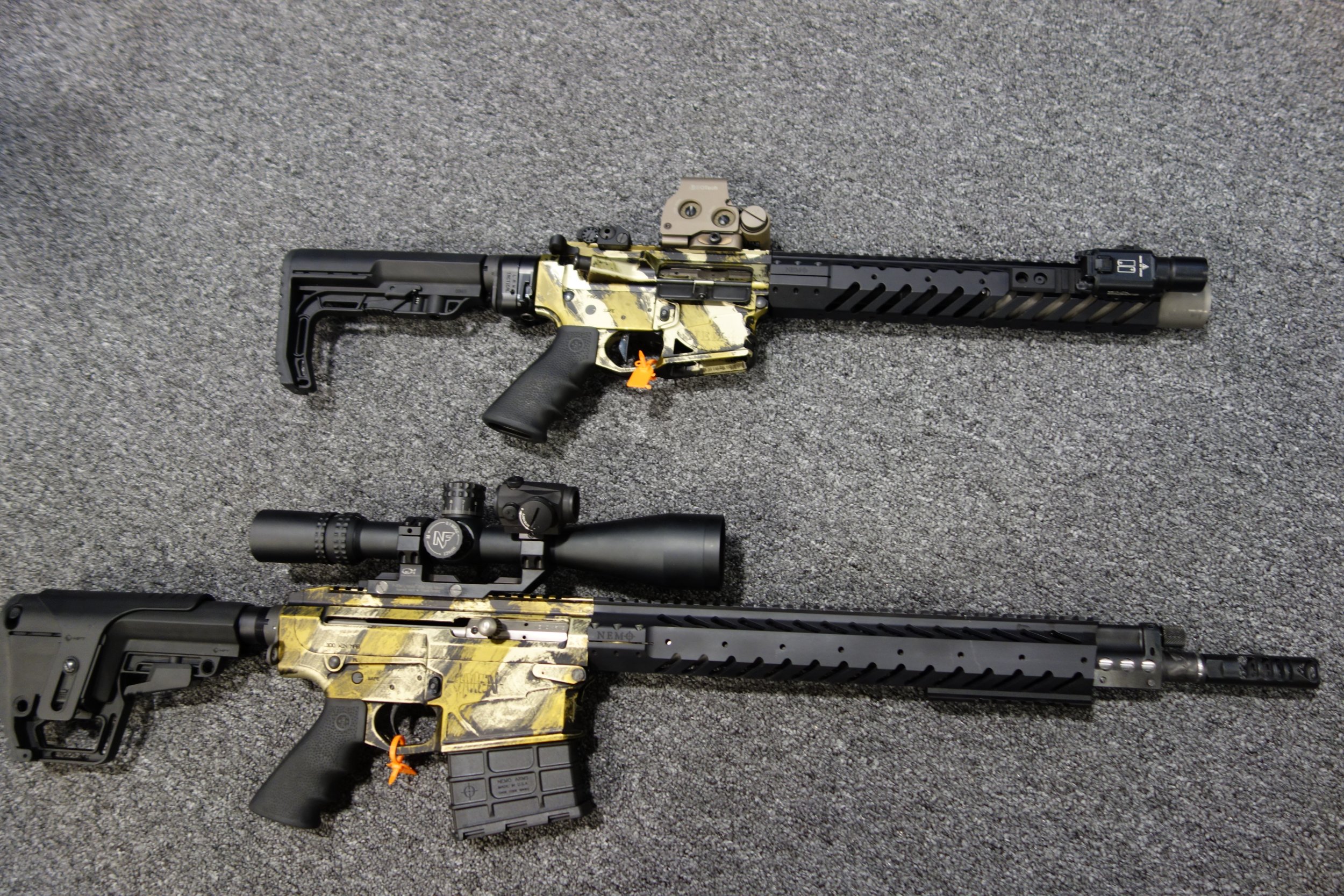 And, that gets to the heart of the NEMO Arms Omen Recon 300 Win Mag Carbine’s purpose, it’s combat-raison d’etre ,if you willl: to neutralize hostiles at distances from 800-1,000 yards with Sierra 175-grain HPBT MatchKing bullets, and most likely even further with specialized high-tech ammo. DR isn’t sure whether or not PNW Arms is making .300 Winchester Magnum ammo yet, but we’d be surprised if their ammo couldn’t enable consistent hits on target out to at least 1,350-1,500 yards with it if/when they do, especially when using a gun like the target=right>NEMO Omen Recon. We’ve been covering their high-end specialized ammo for a couple years, now, and they’ve developed some pretty interesting sniper ammo in 7.62mm NATO (7.62x51mm NATO)/.308 Win. and 5.56mm.

DefenseReview hasn’t yet gotten the opportunity to run the Omen Recon at the range, yet. We intend to remedy that ASAP, however. We’re guessing it shoots like a dream, but the proof will be in the shooting. In the meantime, we hope you enjoy the embedded photos and video we shot at the NEMO booth at SHOT. Clint Walker did a great job of taking us through the NEMO guns AND the RRS BCG, as well as some of the tactical rifle accessories utilized. 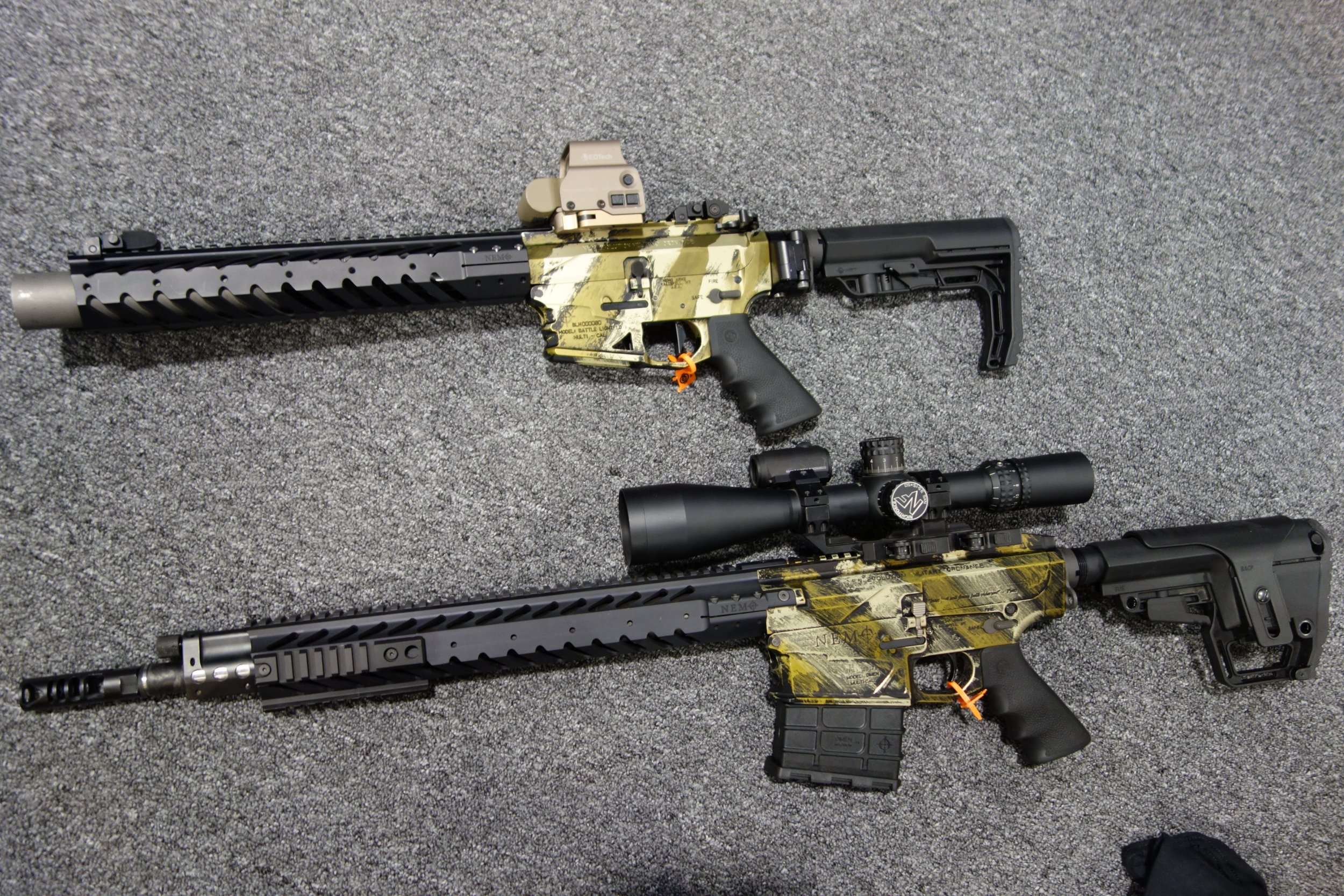 Oh, and “NEMO” stands for “New Evolution Military Ordnance”, just in case you were wondering.

The the NEMO Arms Omen Recon Rifle/Carbine sports some additional goodies, including the following: 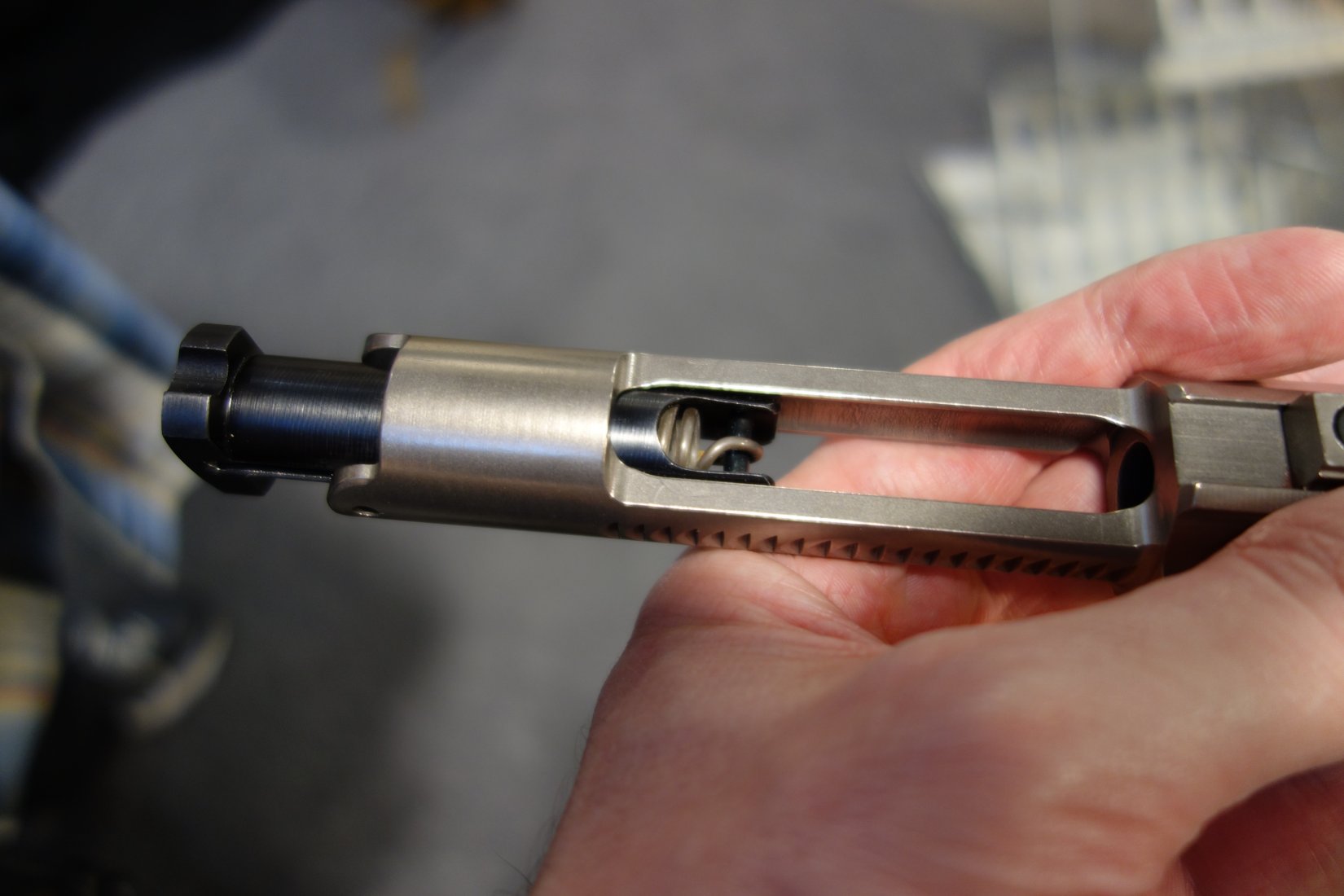