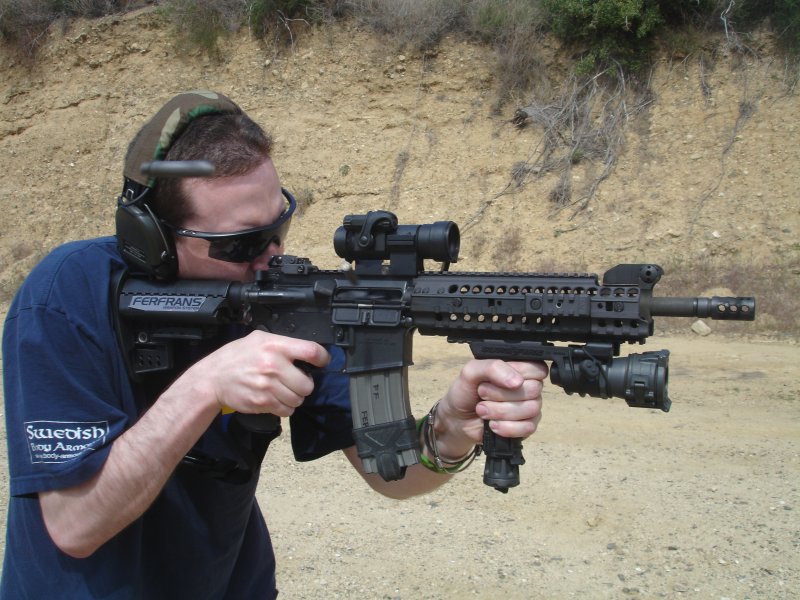 The SBR pictured is FERFRANS’ 11.5-inch SOAR model. We didn’t shoot any photos of the 10.5-incher, but we did capture it on video. We’ll publish this footage as soon as we can. Defense Review would like to state for the record that the FERFRANS SOAR 5.56 SBRs are the most controllable full-auto 5.56mm weapons of this type we’ve ever fired, due to the FERFRANS Rate Reduction System (RRS), a proprietary mechanical cyclic rate reducer that slows the weapon’s cyclic rate/ROF (Rate of Fire) to a nice leisurely 627 RPM (approx.). In the accompanying photos, notice the total lack of muzzle climb while firing full-auto strings. In the photos, you can see multiple casings in the air after being ejected during the run. In the second photo down, you can clearly see three casings in the air. It should be noted that these photos (of the 11.5″ SOAR CQB SBR) were shot at the very beginning of our shooting session, before we even became familiar with the weapons, and before we donned a FERFRANS tactical vest/body armor carrier system and really went to work. Once we put the tac vest on, we commenced the shooting on-the-move a.k.a. runnin’ and gunnin’ portion of the T&E.

During our session with both guns (10.5″ and 11.5″), we experienced no weapon-related malfunctions of any kind. The only malfunction we experience was caused by the steel-cased Wolf ammo we were using (one of two ammo types we fired). While firing on full-auto with one of the guns, the gun got extremely hot, and the steel case of one of the rounds “fused” to the chamber (and got stuck, but good). We had to use a cleaning rod to push (i.e. force) the case out. This took some effort. 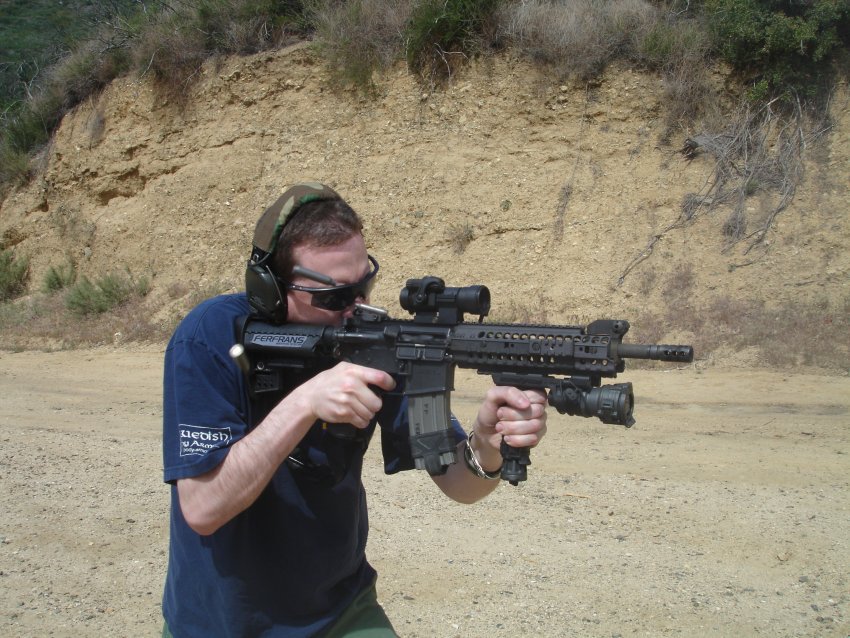 At this point, we believe this sticking-in-the-chamber ammo malfuntion is caused either by Wolf ammo’s steel case or a coating on the cartridge case, or both (unconfirmed/unverified). As the chamber heats up from rapid semi-auto and/or full-auto firing, it’s possible that the steel cartridge case is expanding and “fusing” with the interior wall of the steel chamber (similar metal) and/or a cartridge case coating is melting and becoming sticky, acting like glue and helping to cause the case to stick to the walls of the chamber. It’s most likely the former (steel case-on-steel chamber), though (unconfirmed/unverified). Bear Ammunition’s zinc-plated steel-cased rifle ammo, called Silver Bear, may solve this problem (jam occuring from stuck cartridge case), according to one of our professional sources. However, we have no confirmation of this, and, in general, quality brass-cased 5.56mm ammo (vs. steel-cased ammo) is usually the best choice for a combat weapon, if you have the choice. A brass case won’t stick to a steel chamber, even when the weapon gets crazy hot, since it’s a dissimilar metal and doesn’t require any type of anti-rust/corrosion coating. Long story short, it wasn’t the gun’s fault. It was the ammo’s fault.

Based on our experience with them, FERFRANS SOAR SBRs would currently be our first choice when selecting a direct-gas-impingement select-fire 5.56mm SBR/subcarbine for Direct Action missions, PSD operations, or any other mission where a 5.56mm SBR is required for the CQB/CQC (Close Quarters Battle/Close Quarters Combat) role. Military Special Operations unitis and law enforcement SWAT Teams would be well advised to give the FERFRANS SOAR SBRs a very close look. FERFRANS’ proprietary Rate Reduction System (RRS), and the weapons that utilize it, must be experienced to be fully appreciated. Our session with the FERFRANS SOAR SBRs is the most fun we’ve ever had with 5.56mm assault rifles/carbines/subcarbines on full-auto. Period. Author’s note: The second most fun we’ve had with a select-fire 5.56 assault rifle on full-auto is with the ST Kinetics SAR-21 bullpup assault rifle (very cool gun), which as an adjustable gas system, by the way. 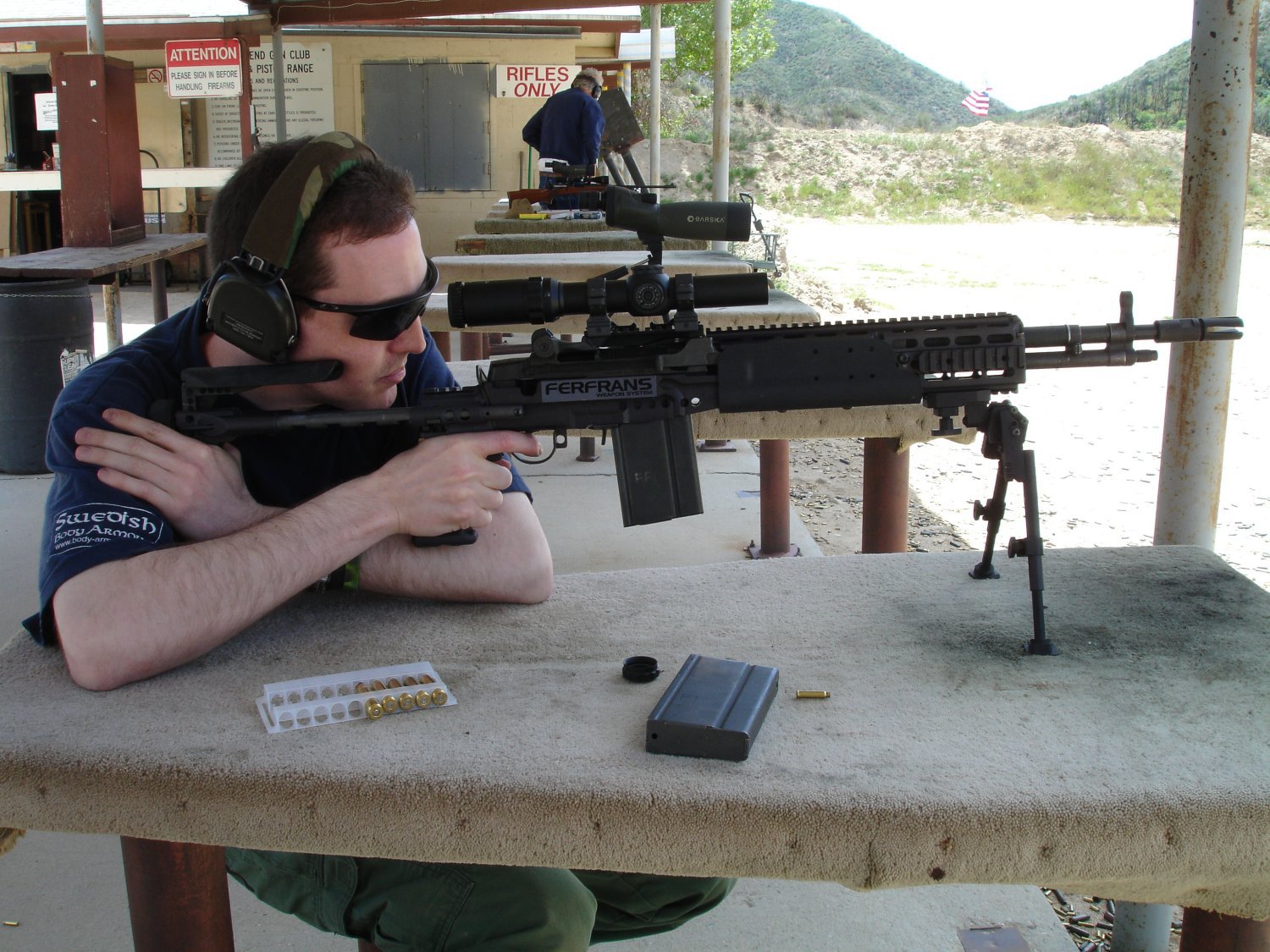 DefenseReview is currently in the process of investigating the combat advantages of the latest gas piston/op-rod-driven AR-15/M16 variants like the HK416 (a.k.a. HK 416), LWRC M6A2 CQB, and POF-USA P-416. We haven’t finished conducting our research on these yet.

The reason for the development of the HK416, specifically, is that the gas piston-driven system is supposed to be more reliable under adverse conditions (sand, mud, etc.) and high round count, and requires less maintenance to keep it running. It also runs cooler, and is supposed to offer certain advantages when a suppressor is utilized, like keeping hot gas and particulate matter from blowing back into the operator’s face, for instance. That being the case, DefenseReview hasn’t yet seen any empirical data on any reliability advantage, yet. It would therefore be interesting to see how the FERFRANS SOAR and HK416 carbine and SBR configs stack up against each other under adverse conditions and high round count with and without suppressors attached, in a side-by-side test. While we’re at it, we might as well throw in the LWRC M6A2 carbine and CQB SBR, to see how its performance compares to the HK 416.

We’d also like to test the FERFRANS SOAR SBRs against the select-fire M16 Viper and M16 Viper-XRP (eXtra-Range/Perimeter) SBRs custom-built by Greg Leaf at M16 Clinic, since the Vipers are also direct-gas-impingement ARs. It’s DefenseReview’s understanding that the M16 Viper models operate at a significantly higher cyclic rate than 650 RPM, so it would be interesting to see how they compare to the SOARs regarding full-auto controllability and hits on target during CQB drills. 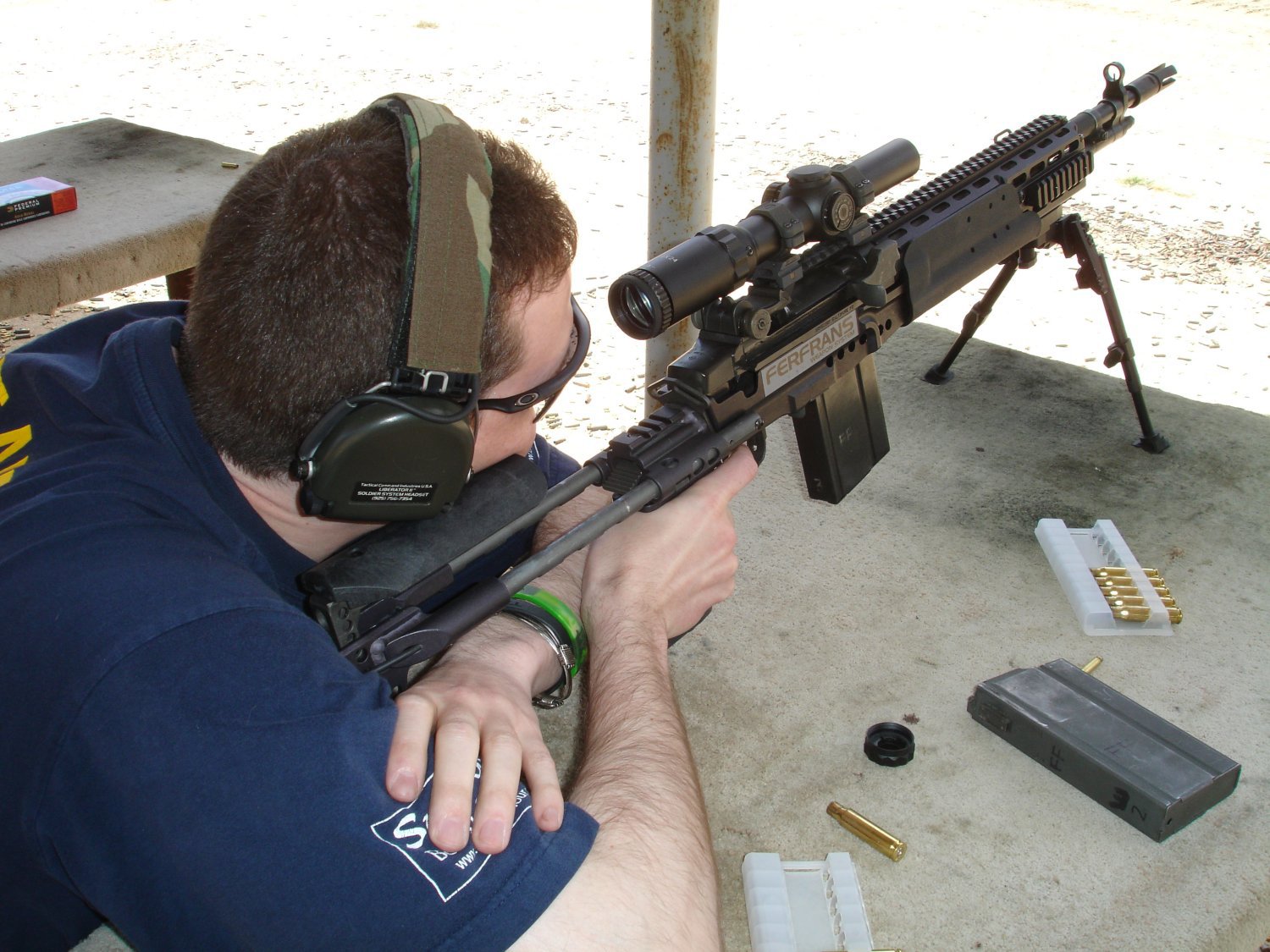 DefenseReview T&E’d the 7.62x51mm NATO (7.62mm NATO/.308 Win. FERFRANS SOPMOD M14/M1A EBR-type rifle/carbine on the same day, and this gun really impressed us. We were firing at multiple elevated targets that ran up a mountain. The furthest target was approx. 400 yards way (We think.). We’ll check with Ferdie Sy to confirm this distance. Anyway, the weapon performed extremely well from the bipod. Engaging multiple targets quickly and accurately was a snap. In fact the FERFRANS SOPMOD M14/M1A EBR made it difficult to miss. If I remember correctly, neither we nor the weapon’s owner who was shooting with us missed a singel shot with it. It’s an impressive weapon, and we’d recommend it (along with the FERFRANS SOAR 5.56 SBRs/subcarbines) to any military Special Operations or law enforcement SWAT team that can afford it.

Author’s Note: DefenseReview recently got to fire a small number of rounds through an HK416 SBR on full-auto during the 2007 NDIA Small Arms Symposium firing demo at Blackwater USA. In our limited experience with it, the HK416’s cyclic rate seemed significantly higher than the FERFRANS SOAR’s 650 rounds per minute. The HK416 SBR seemed more difficult to control than the SOAR SBRs. We’ll try to find out the HK416 SBR’s ROF (cyclic rate). Regarding full-auto fire, we’d really have to run the HK416 and FERFRANS SOAR SBRs side by side to measure the difference. That said, we remember the FERFRANS SOAR SBRs being the more controllable and enjoyable to shoot on full-auto. 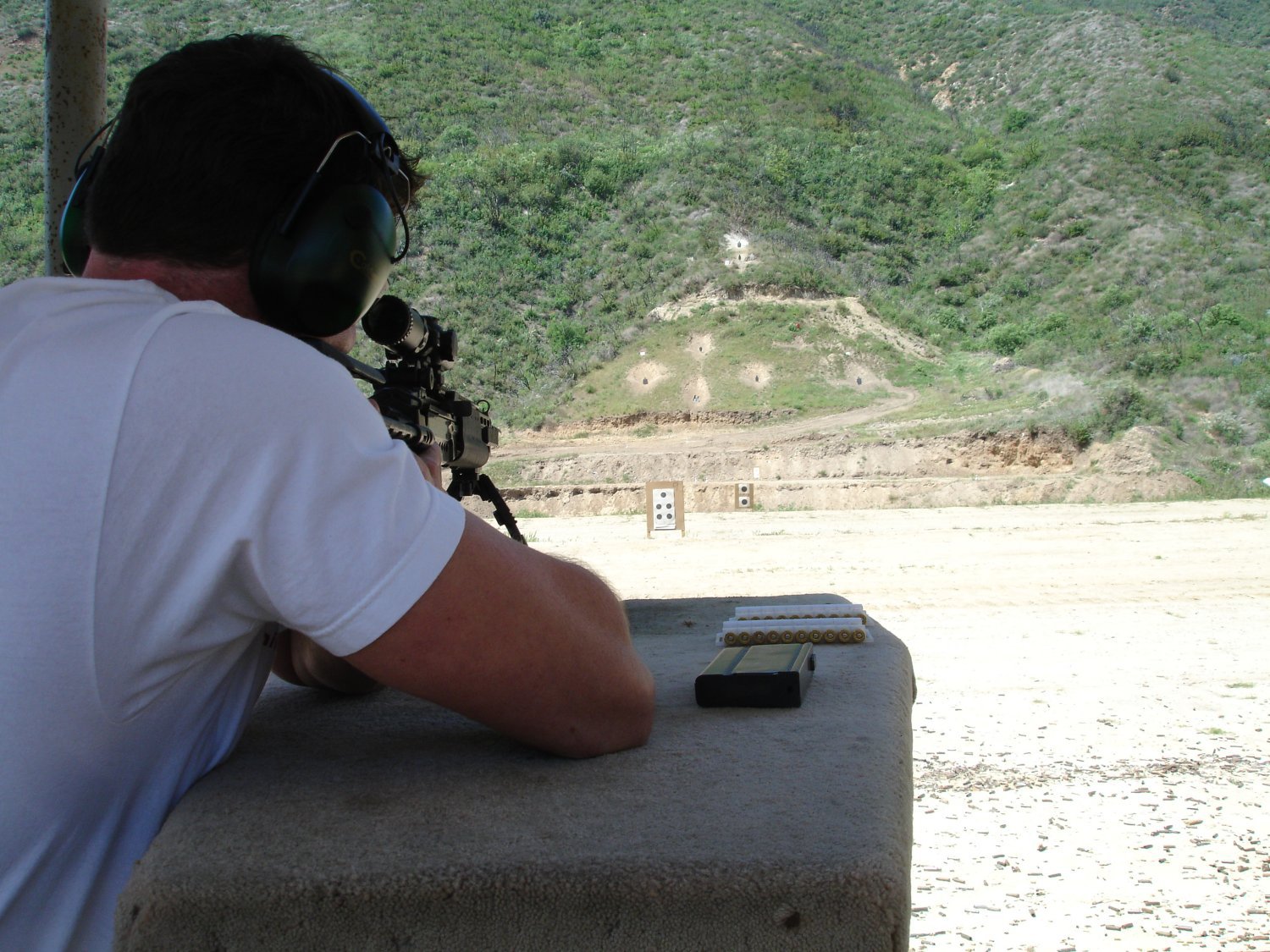 A quick word on the rather ingenious M4-62 GPCR tactical reticle: This unique reticle allows you to intuitively measure distance by viewing the size of a human target in relation to the reticle’s upside-down horshoe shape, even when image magnification is used at longer ranges (up to 4X). Since the GRSC CRS is a front focal plane (FFP) scope, as opposed to a rear focal plane (RFP) scope, the size of the reticle changes according to the power setting. When the scope is set to 1X (no magnification), the upside-down horseshoe reticle is smaller. As you up the magnification (all the way up to 4X) the recticle becomes larger in the window, and retains all of the ranging and windage/movement aspects throughout the magnification range. You retain your precision at all combat distances. The M4-62 tactical reticle’s unique design simultaneously enables you to quickly and intuitively adjust for windage and/or movement (moving targets).

When set to 1X (no magnification) the GRSC CRS tactical scope is surprisingly fast for close quarters work (CQB/CQC). It might not quite as fast at close quarters range as an Aimpoint CompM4 Red Dot Sight or EOTech 553 HOLOgraphic Weapon Sight (HWS)–neither of which has any eye-relief issues–but it’s pretty damn close. It’s fast, folks, even when you’re knockin’ down doors (extreme close range). And, it allows you the 1-4X magnification capability that the Aimpoint and EOTech simply can’t do. Our only druther at the moment with the CRS tactical scope is that we’d like to see the reticle able to go brighter (i.e. a higher level of illumination like the Aimpoint and/or EOTech) and be auto-adjustable for brightness, based on the ambient light level, so the operator doesn’t have to wast valuable time and/or his sight picture performing this operation under combat conditions.

DefenseReview plans to publish an article specifically on this scope, in the future. In the meantime, Chen Lee a.k.a. “SMGLee” has posted a review of the GRSC CRS and M4-62 Combat Reticle here. We recommend you read it.

The tactical eyewear a.k.a. tactical eye protection a.k.a. “tactical Eyepro” pictured is the Oakley M Frame Strike a.k.a. “Strike Array“. The Oakley Strike Array ballistic Eyepro package that we received comes with multiple replacement ballistic lenses (dark/grey, clear, and orange). The Oakley Strike lenses offer perfect clarity with no distortion, so where you’re aiming is where you’ll hit. The Oakley Strikes we were wearing performed perfectly during our FERFRANS shooting session, and we highly recommend them for tactical shooting applications. In fact, we recommend all Oakley Eyewear (tactical eyewear) products, for that matter. Frankly, you just can’t go wrong with them.

The tactical hearing protection a.k.a. “tactical hearing pro” pictured is the Liberator II Tactical Headset a.k.a. Soldier System Headset, made by Tactical Command Industries, Inc. (TCI). Designed specifically for U.S. military Special Operations personnel, the TCI Liberator II is a combo unit, providing both active/electronic hearing protection (with ambient sound amplification) and tactical 2-Way Comms (2-Way Communications). The TCI Liberator II Soldier System Headset was built using a low-profile MSA Sordin tactical headset as the base unit. Dual-Comm and Singl-Comm versions are available. TCI has integrated a flexible boom microphone with noise-cancelling Dynamic or Electret microphone, and can include a TCI Tactical Push-To-Talk button, U-94 Switch Box, or their “H”-series PTT Box and a radio interface for your radio model(s).

The TCI Liberator II Soldier System Headset provides the wearer a tactical advantage while conducting dynamic CQB/CQC during Direct Action missions and general urban warfare warfare operations (a.k.a. urban combat operations) by doing three things at once. It magnifies his hearing while protecting his hearing from all loud noises, and allows him to maintain his directional hearing. In other words, he can better hear all the sounds around him (including the enemy) and still tell the direction from which those sounds are coming, while the headset mutes/cancels all loud noises above a certain decibal level.

And last, but certainly not least maglula Ltd. LULA Magazine Loader & Unloader COTS (Commercial Off The Shelf) speed-loading device.  DefenseReview is a big fan of the LULA speedloader, and it came in extremely handy while we were T&E’ing the FERFRANS SOAR direct-gas-impingement (DGI)-driven SBRs.  Understand that we put approximately 1500 rounds through the guns.  Without the LULA,
the whole process would have taken a lot longer and would have been
much less comfortable. 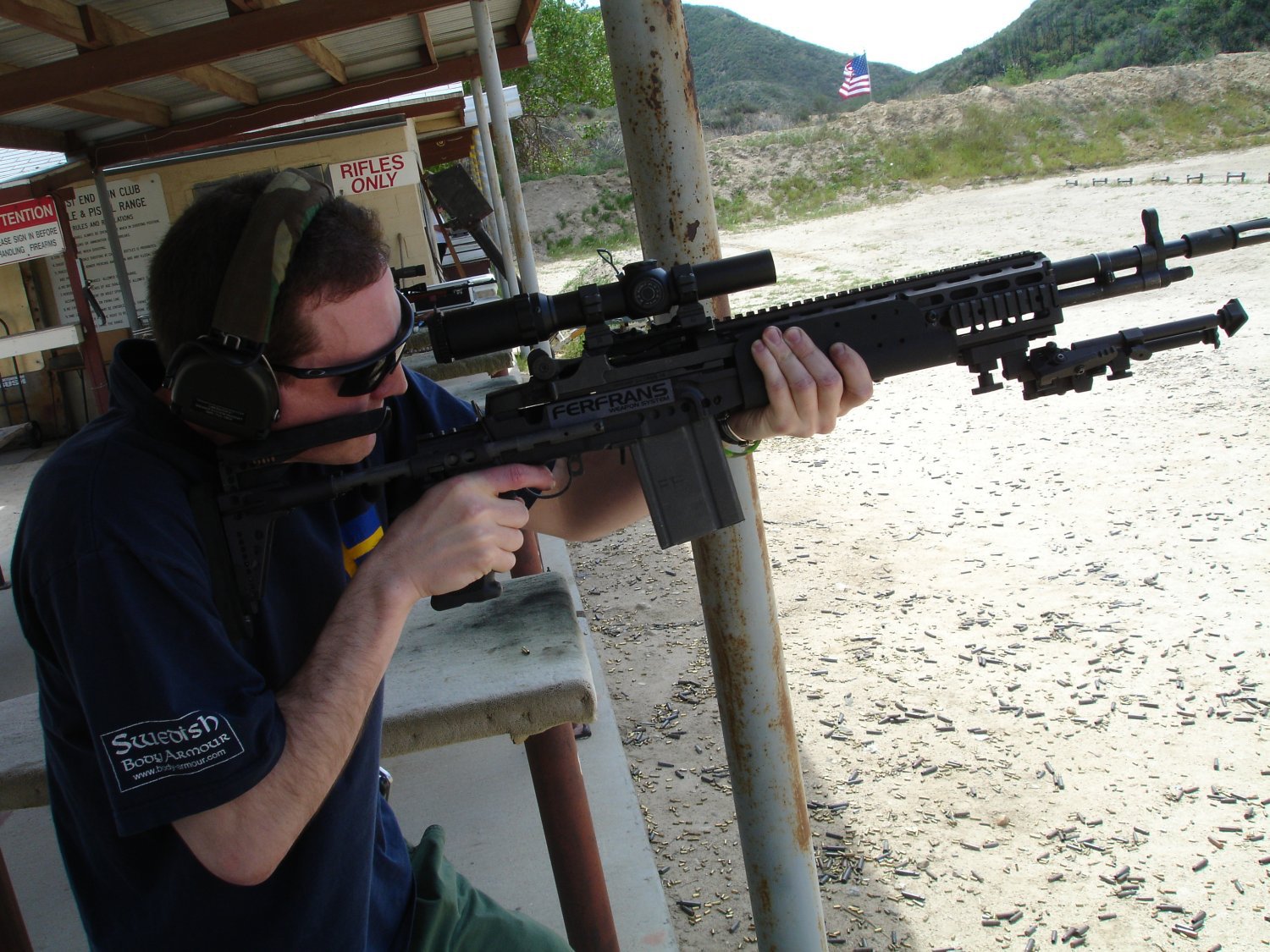 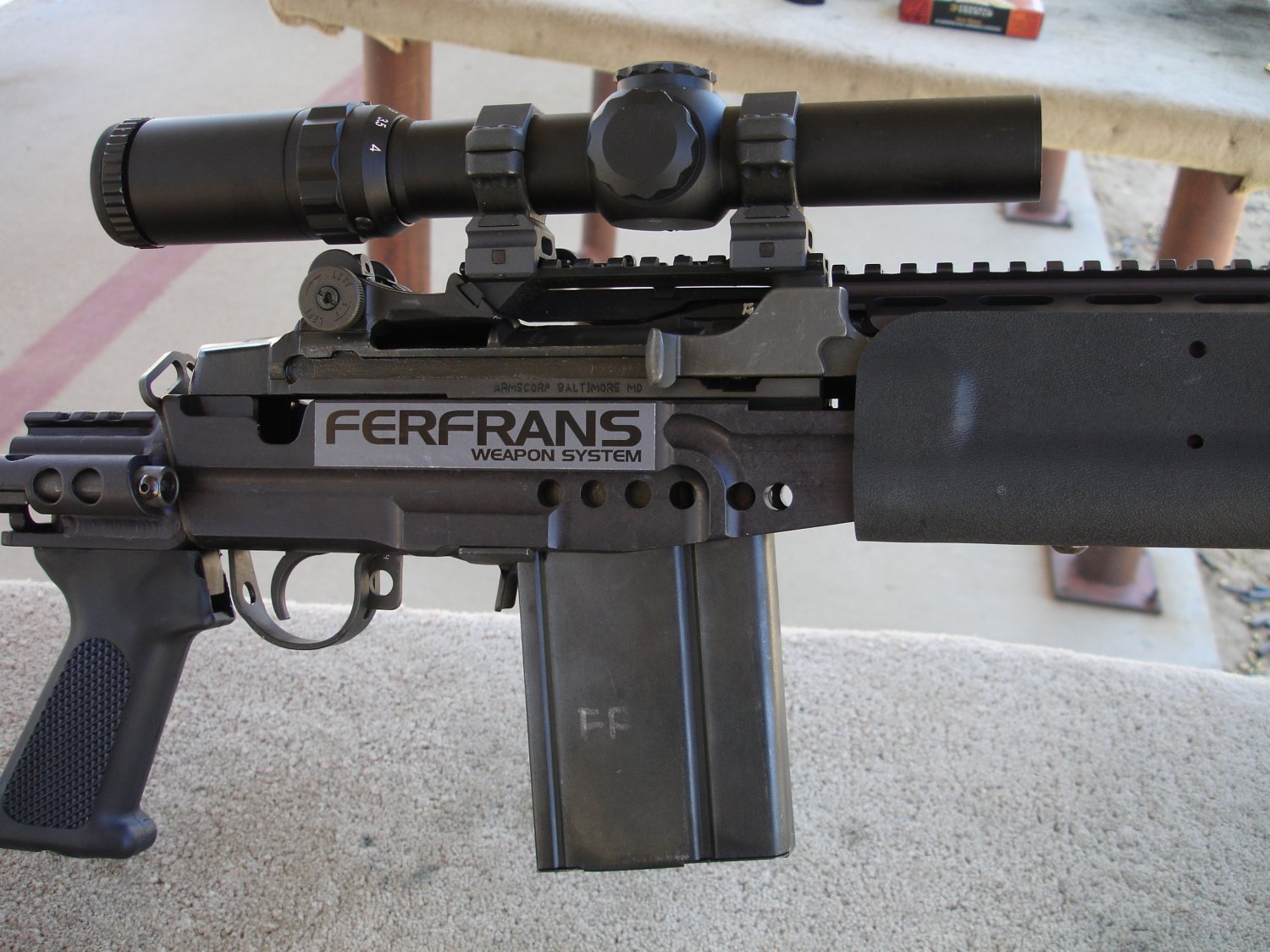 David Crane started publishing online in 2001. Since that time, governments, military organizations, Special Operators (i.e. professional trigger pullers), agencies, and civilian tactical shooters the world over have come to depend on Defense Review as the authoritative source of news and information on "the latest and greatest" in the field of military defense and tactical technology and hardware, including tactical firearms, ammunition, equipment, gear, and training.
Previous Parascope Urban Combat Sight (UCS): Kill the Enemy from Behind Cover
Next MagPul PDR 5.56 PDW: The Forgotten Photo