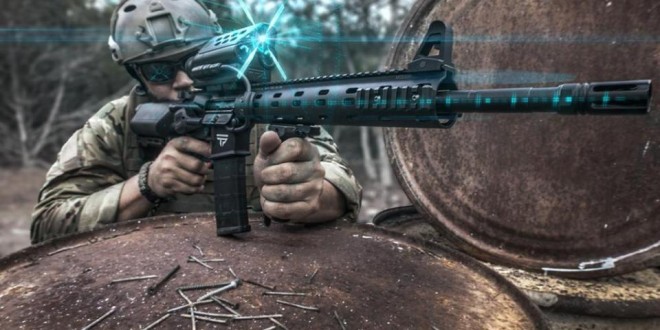 A couple days ago, Guns.com published an article on the new TrackingPoint AR’s, which include the Trackingpoint TP AR 556 PGF (Precision Guided Firearm) (5.56x45mm NATO)/.223 Rem.) and TrackingPoint TP AR 300 PGF (300 Blackout/300BLK) AR-15-platform tactical carbine/SBR’s (Short Barreled Rifle), and the  TrackingPoint TP AR 762 PGF 7.62mm NATO (7.62x51mm NATO/.308 Rem.) AR battle carbine/SBR that all use Tracking Point’s proprietary TTX/XACT smart scope technology to tag, track and engage/hit moving enemy targets out to 500 yards and 750 yards, respectively. The article’s  worth reading, and would appear to indicate that the TrackingPoint AR’s, first announced before SHOT Show 2014, may either be going into production very soon, or are already actually in production (unconfirmed/unverified). We’ll try to obtain clarification on this point. DefenseReview (DR) readers may remember that we were one of the first publications to report on TrackingPoint XACTSystem “Tag, Track, Xact (TTX)” “smartscope” technology, after we initially came across it at SHOT Show Media Day at the Range 2013. 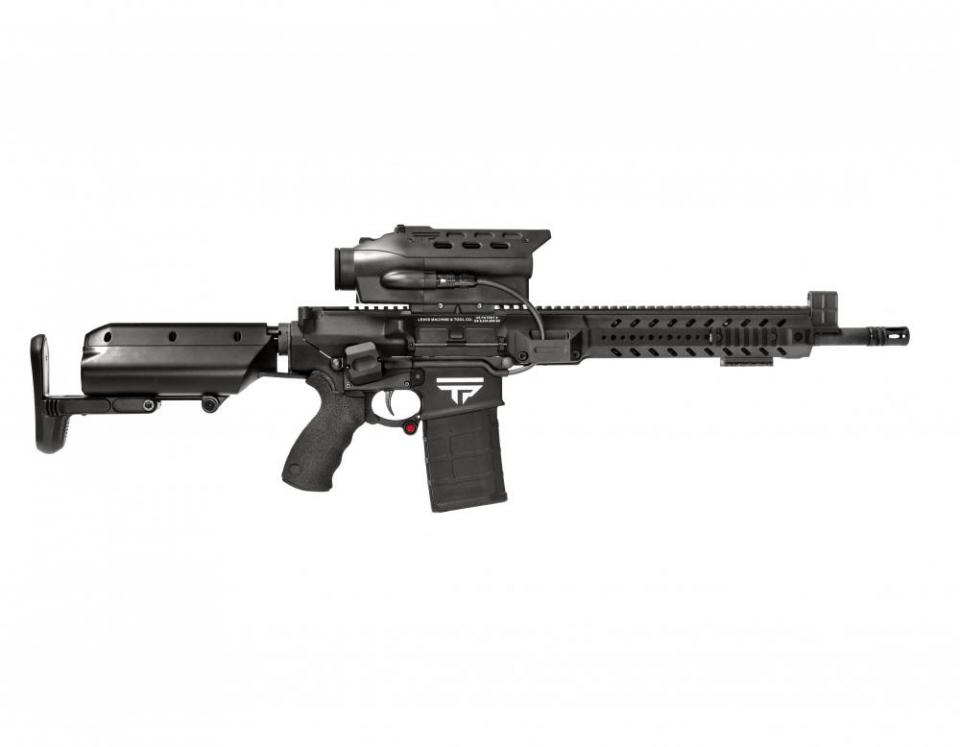 In fact, TrackingPoint’s XACT tech smart scope (and PGF, or “Precision Guided Firearm”) was the very first item we covered from that show. We then published a follow-up article containing a pretty detailed product-demo-and-interview video that we shot on the exhibition floor, which was one of the most detailed videos on the XACTSystem tech from that show. We then subsequently covered further Tracking Point product developments like a .50 BMG platform version of it. And, our readers may have noticed that we’ve been pretty positive on the technology and products, which we see as potentially game-changing, assuming the intelligent electronic scope tech is accurate, reliable and durable under combat conditions at combat-realistic round counts.

DR attempted to reach TrackingPoint’s “Director of Marketing”/resident media guy Oren Schauble by phone yesterday, in order to answer the question of whether or not the new AR systems are actually already in production (or when that will happen) and to try to get some good recent range photos and video footage to include with this article, but we came up short. Mr. Schauble wasn’t available. On a side note, we don’t remember ever meeting or speaking with Mr. Schauble at SHOT (or any other industry show), who, from his bio photo, looks like a 90’s grunge rocker (circa 1991-1995) that someone forced into a business suit and placed in front of the camera under protest. So, we think we would have remembered him, had we actually met him, unless he was really boring. Oren, if you’re reading this, Chad Kroeger from Nickelback called, and he’d like his (1995) look back. A little humor. Seriously, though, we look forward to speaking with Mr. Schauble at some point, if/when he’s willing. He’s probably a good guy, and hopefully a good sport about us making a little good-natured fun of his beautiful long hair and rockin’ goatee, which really shines, and possibly even smells like teen spirit. It’s possible. Too much? Perhaps, but click on the previous two links for some good 90’s music and fond grunge-era memories. 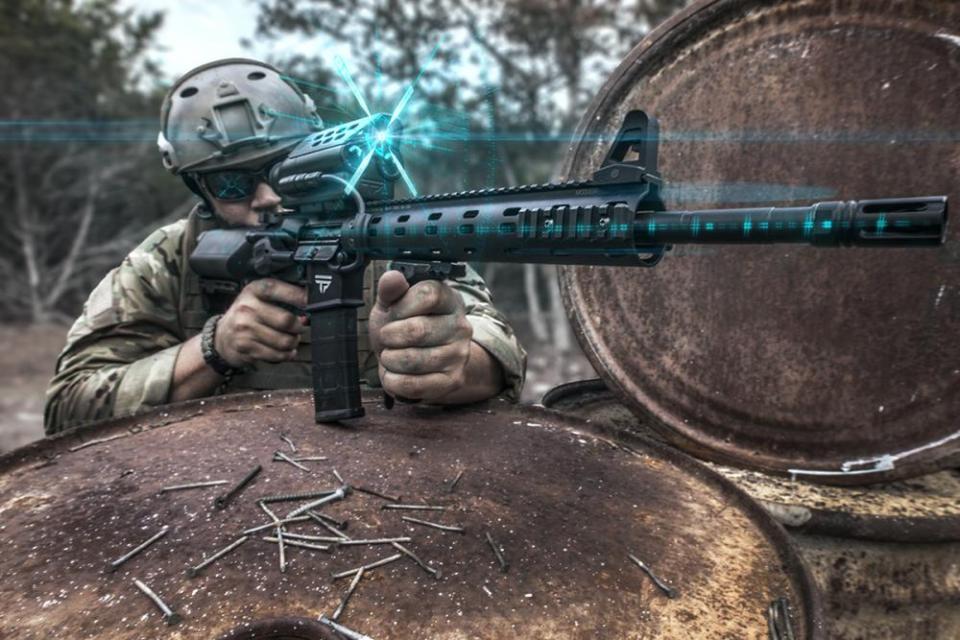 By the way, we also tried to reach TrackingPoint’s illustrious co-founder and latest CEO John Lupher (there’s a potential joke in that last name, but I’m not gonna’ touch it) by phone, yesterday, but no joy there, either. In Mr. Schauble’s and Mr. Lupher’s collective defense, they’re probably just really busy over there, and/or out of the office, or on travel. Defense Review noticed from his bio that Mr. Lupher appears to hail from the GREAT state of Texas, which came as a surprise to us, since we initially guessed “friendly Canadian mayor” upon viewing his bio photo. It may just be the snazy powder-blue shirt and warm, welcoming smile. Then again, maybe not. Sorry, John, I got Oren, and fair is fair.

But, let’s get back to the guns. The TrackingPoint TP AR 556 PGF, TP AR 300 PGF and TP AR 762 PGF ARs all look pretty good, and hitting moving targets quickly, easily and consistently off-hand out to 750 yards with a semi-auto 7.62mm carbine/SBR is no joke (if it’s true), but we’d very much to see the TrackingPoint TTX technology applied to the NEMO Arms Omen Recon .300 Win Mag (.300WM) tactical AR carbine, if they can get the TTX tech to work out to at least 1000 yards, and ideally out to 1200 or even 1500 yards. Now, THAT would be an interesting pairing, and, in our opinion, a REAL combat game changer. I mean, GOOD LORD. 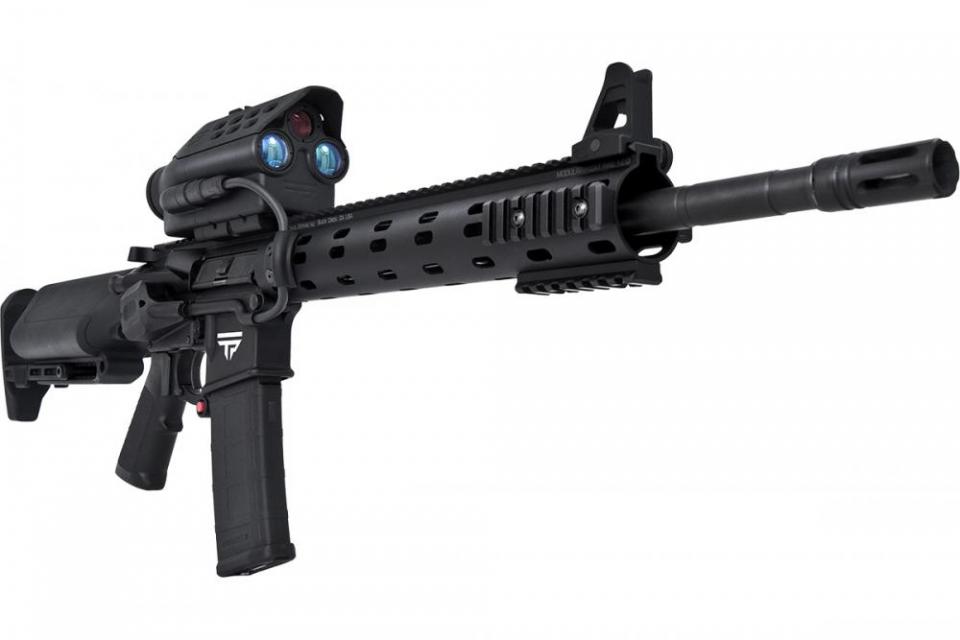 We should note that you don’t have to use the TrackingPoint scope’s “advanced” TTX XACTSystem mode (where you mark the target with the red tagging button, pull the trigger, and then worry about actually placing the reticle on the target) on the new TrackingPoint AR’s. There’s also a “Freefire” mode that let’s you use the TrackingPoint scope more traditionally by making the trigger pull the last step in the shooting process. Oh, it’s still a smartscope, since the scope adjusts the reticle automatically (electronically) using the laser rangefinder and other sensors to measure the distance to target and the weapon’s orientation/position.

Just like in TTX mode, the TrackingPoint scope will automatically compensate for bullet drop and rifle orientation by re-positioning the reticle. You just can’t actually fire the shot until you’re locked onto the target. You can effectively engage moving targets in both firing modes, since the scope calculates an accurate shooting solution in both modes, once the target is tagged with the red button.

Assuming the TrackingPoint TTX smartscope tech is hardened/ruggedized enough for combat under adverse conditions and high round count, the only real caveat we can see for it is the considerable per-unit cost, which is reportedly just under $10,000 USD. That may be a pretty big chunk of green, but you do get what appears to be a Daniel Defense (DD) MFR 12.0 (Daniel Defense Modular Float Rail 12.0) or lightweight modular free-float tactical handguard/rail system/forend rail tube, which is a nice rail, on the TP AR 556 PGF 5.56mm and TP AR 300 300BLK tactical AR carbines.