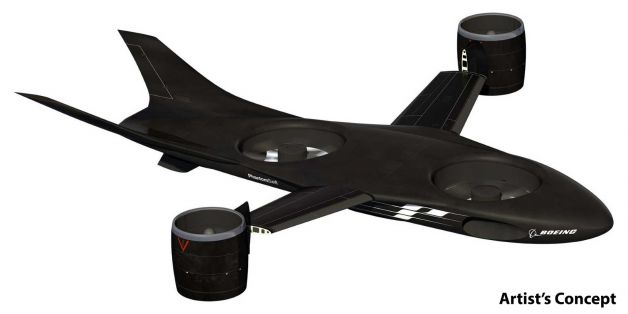 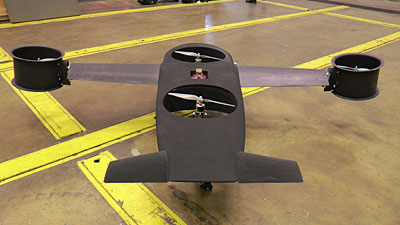 A team of Boeing Phantom Works engineers, including chief engineer Perry Ziegenbein, aerodynamics engineer Mike Duffy, design engineers Scott Bauer and Matt Staufer, and composites expert Michael Mikuszewski (try spelling that last name without looking), recently designed and a 17% model of an interesting tilt-rotor/tilt-wing ducted-fan VTOL (Vertical Take-Off and Landing) X-Plane called “Phantom Swift” from scratch for DARPA (Defense Advanced Research Projects Agency), and got it airborne in less than a month using rapid prototyping, including CAD/CAM and 3D printing, or “additive manufacturing”, in industry lingo. Design time: 3 days. Parts Acquisition: 10 days. Build and fly it: 14 days. That’s some serious Boeing badness, right there. “A picture is worth a thousand words, a flying model is worth a million words. No matter what words you put in a proposal, having hardware that you can demonstrate that they can tangibly see what’s being proposed goes a long way toward winning that proposal,” said Perry Ziegenbein, Phantom Swift’s chief engineer.

DefenseReview (DR) is a big fan of futuristic and capable VTOL and STOVL aircraft in general, provided they’re rugged, reliable and effective. That includes the F-35B STOVL (Short Take-Off, Vertical Landing) Lightning II Joint Strike Fighter (JSF), on paper/in theory. The F-35B, of course, still has to overcome some design, manufacturing and/or QC (Quality Control) issues like the reported bulkhead and rib cracking issue. Trouble-free VTOL and STOVL aircraft are extremely tactically and strategically advantageous, since they don’t require long, paved runways (and the necessary air bases that provide them) or traditional large aircraft carriers for takeoff. VTOL and STOVL aircraft can therefore be much more easily dispersed, camouflaged and hidden in the field, and deployed pretty much from anywhere. MAJOR tactical and strategic advantage.

Getting back to the Boeing Phantom Swift DARPA X-Plane prototype, though, DR likes it’s deisgn aesthetic and seeming high-degree of lift power provided by the two large lift-fans in the body and two smaller lift fans on the ends of the wings (one per wing). The aircraft has nice flowing lines, and looks futuristic. Defense Review is interested to see the final full-scale product.

Regardless, the Boeing Phantom Swift VTOL aircraft prototype is a great example of what rapid prototyping can help design engineers accomplish in an incredibly short amount of time. “Rapid prototyping is the wave of the future, I guess you could say,” says Mikuszewski.

DR agrees, and hopes it ushers in a new era of U.S. military aircraft development that takes only 5 years at most (o.k., we’ll settle for 7 years), rather than the F-22’s 15-25 years (depending on which starting  date you go by) to develop, finalize and field a new, next-gen fighter aircraft (or other high-tech tactical aircraft). That would be nice, and a very welcome change.

Eurofighter Typhoon: Can Thrust-Vectoring and Low-Observability be Added?