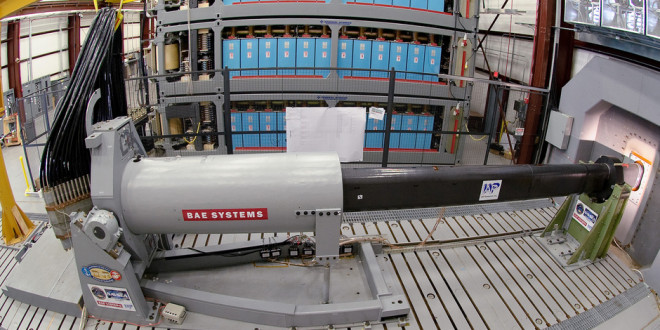 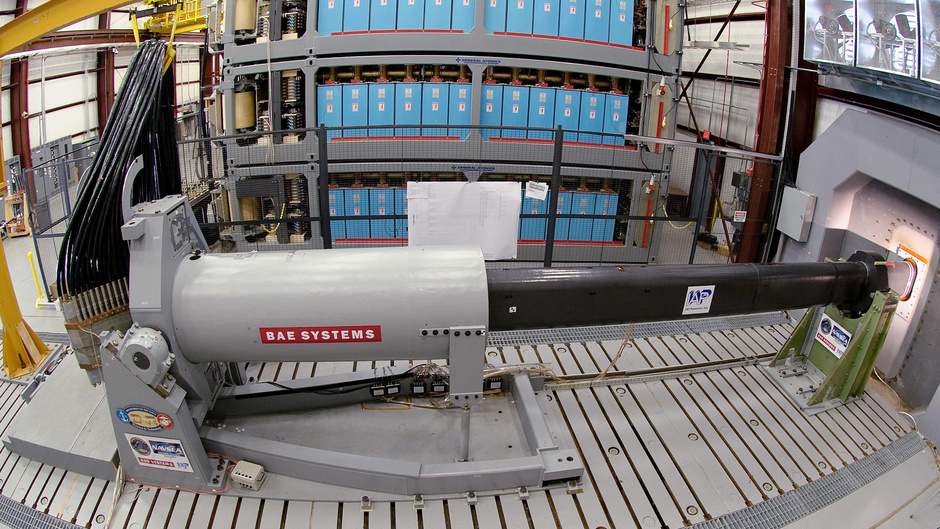 Why settle for simply destroying a target when you can the the “Lorenz Force” to completely obliterate the target by vaporizing it and turning it into the fourth state of matter (that would be plasma), literally removing from existence? Well, if you’re the United States military you don’t. It’s frankly not in the U.S. miitary’s nature to settle, and it’s damned sure not the U.S. Navy’s. Thus, the electromagnetic railgun (also written “rail gun”), a miniature functional prototype of which DefenseReview (DR) covered way back in April 2005, after we viewed it at the 24th Army Science Conference (ASC 2004).

Of course, the miniature prototype we saw and photographed was developed by a team at the University of Texas at Austin’s Institute for Advanced Technology (IAT) Electromagnetic Systems Division. But the life-sized Coca-Cola-version prototype, i.e., the “real thing”, was developed by BAE Systems for about $500M ($500 Million). Last July (2013), the Office of Naval Research (ONR) awarded BAE a $34M follow-on contract for a multi-shot, auto-loading railgun prototype with a heat management system, which is supposed to be test-fired on a ship sometime in 2018.

The Lorenz Force generated by the railgun prototype’s electromagnetic pulse upon firing can reportedly propel a 23-pound projectile more than 100 miles at speeds up to Mach 7, or 5,328.45 mph. Two single-shot prototypes developed by BAE Systems and General Atomics will be tested in 2016.

Anyway, Defense Review, being a big fan of Reagan’s “Peace Through Strength”, or as we prefer to phrase it, “Peace Through Firepower Superiority”, is down with OPP on this whole rail gun thing, since we like guns AND science fiction. Railguns, laser guns, ray guns, traditional guns–we like it all, so we’re on board with this particular program. Maybe it’s time for a new phrase: “Deterrence Through Destructive Capability”. O.k., we’re still working on it.