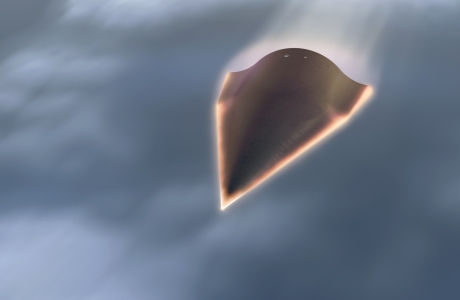 The Washington Times recently published a piece by Bill Gertz on a maneuverable scramjet-powered ultrahigh speed strike vehicle–basically just a cool name for a hypersonic aircraft–being “the Pentagon’s main choice for a new long-range, rapid attack weapon”, according to a senior Pentagon official.

Two of the more visible and well-known potential platform testbeds for this maneuverable ultrahigh-speed strike vehicle concept are the unmanned Boeing X-51 WaveRider, which is B-52-launched and flies at up to Mach 5.1 (3,882 mph), and the Lockheed Martin Falcon HTV-2 (Falcon Hypersonic Technology Vehicle 2), “an unmanned, rocket-launched, maneuverable aircraft that glides through the Earth’s atmosphere at incredibly fast speeds—Mach 20 (approximately 13,000 miles per hour)”, according to the Falcon HTV-2 web page, making it another atmospheric wave rider, or wave glider, if you will.

Mach 20 is pretty screamin’ fast, even for a scramjet aircraft, twice as fast as the rocket/missile-launched Chinese WU-14 HGV that it may have to one day either intercept in the air, or just pass right by on its way to a counter-strike target. The WU-14 presents a big problem, since it flies at Mach 10, and China is a nuclear country. Even conventional-weapon-armed aircraft flying at Mach 10 are scary. Actually forget a weaponized aircraft. Imagine an enemy Kamikaze Mach-10 aircraft hitting targets with pure kinetic force. The effects would be devestating, both physically and psychologically. Frightening stuff. Can’t let the Chinese or the Russians (or anyone else, not even the British–and we like them) beat us to this one.

DefenseReview’s (DR) immediate question is whether or not our “ultrahigh speed strike vehicles” would impact the target themselves like a cruise missile, or if they would carry and deliver missiles and bombs (conventional or nuclear) to the target, or both. Eventually, it only makes sense that we (the U.S) would have many types of these aircraft with different capabilities, payloads and mission profiles, and that are capable of all types of strikes.

The late, great Paul Czysz of McDonnell Douglas (and television) fame was actually a big fan of missile-equipped manned hypersonic strike aircraft that could be sent to any point in the world to intercept and destroy a target within the shortest time possible. Czysz was a serious individual involved in a number of classified projects (including “exotic technologies”) at McDonnell Douglas and perhaps elsewhere, and he was probably a true aerospace genius, so his thoughts carry a lot of weight with us. If he said something was a good idea, it probably was.

Anyway, getting back to the Washington Times piece, one Alan R. Shaffer, Principal Deputy Assistant Defense Secretary for Research and Engineering (sounds important), told some unnamed military defense industry conference that the concepts have been proven and are a high priority for “Pentagon weapons developers”, despite recent U.S. miitary defense spending cuts (presumably related to sequestration). This may seem counterintuitive, but not really, if you believe Mr. Shaffer. Scramjet engines are much simpler and less expensive than turbine engines. Scramjet engines just force air into the front, ignite it, and then force it right out the back. So, none of a turbine jet engine’s complexity. So, a squadron of scramjet hypersonic aircraft should be significantly less expensive to manufacture and purchase than many of the current ones, at least in theory.

The only problem is that statements like Mr. Shaffer’s rarely reflect the eventual reality of higher and higher costs and expenditures. So, we’ll see, but Defense Review is highly skeptical of Mr. Shaffer’s assertions on the future manufacturing and purchasing costs. Although we do agree with Shaffer’s belief that “We, the U.S., do not want to be the second country to understand how to have controlled scramjet hypersonics.” He’s definitely got that right. In 2013, the X-51 WaveRider flew several thousand miles and reached an altitude of 80,000 feet, which is near-space. Now, that’s only 300 seconds of flight time, but Shaffer claims that’s a “huge deal” and “means we are now starting to understand hypersonics”.

Let’s just hope we beat the Chinese and the Russians in the hypersonics race. We need this one.