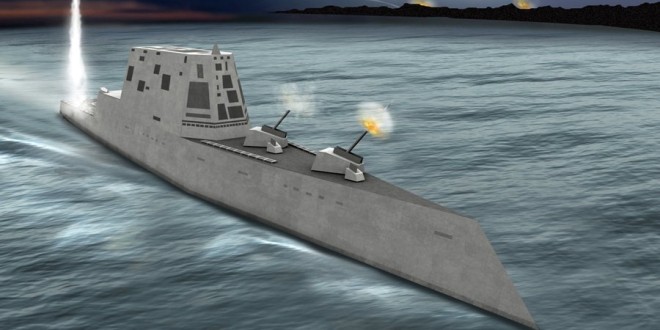 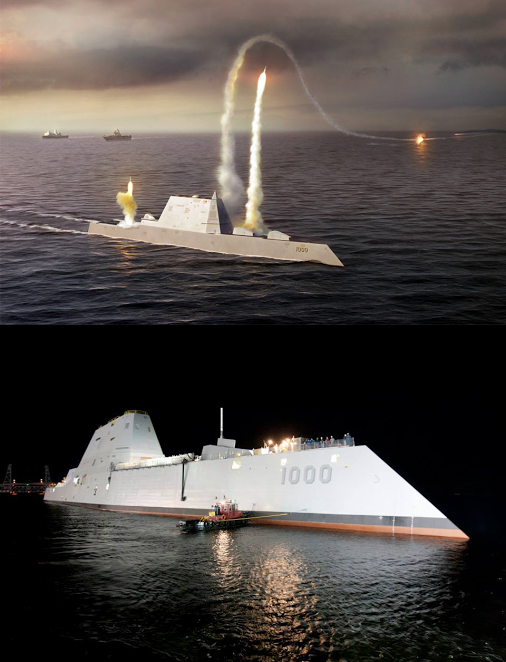 The mighty U.S. Navy just launched the the brand-spanking-new Raytheon DDG 1000 Zumwalt-Class Destroyer, a $3B (that’s $3 Billion, with a “B”) low-observable/stealth destroyer, on Saturday, April 12, and it looks like a rather serious ship, at least on paper. Named after the late Admiral Elmo “Bud” Zumwalt, however good or bad (or mediocre) the new warship actually ends up being, it’s certainly an interesting one. Its two most immediately interesting features are its radar stealth geometry and its electric-driven propulsion system which is reportedly powerful enough to power the future BAE electromagnetic railgun and possibly also a shipborne laser weapon system like the Raytheon LaWS (Laser Weapon System).

With all that weaponization, the Raytheon Zumwalt-Class Destroyer should be a hyper-lethal naval blaster of heretofore impossible proportions. However, while it can operate in just 30 feet of water, it’s still a surface ship, even though it looks like, and probably should be, a submersible ship. So, no matter how much low-observable above-the-water geometry it employs, it’s still going to have a lot of exposed surface above the water in daylight and at night. The enemy will thermal/IR (infrared) and night vision imagers. Imagine for a moment if it were that stealthy AND submersible. Then imagine all it has to do is just raise the rail gun and laser out of the water to fire them and engage the enemy, then go right back under the surface. 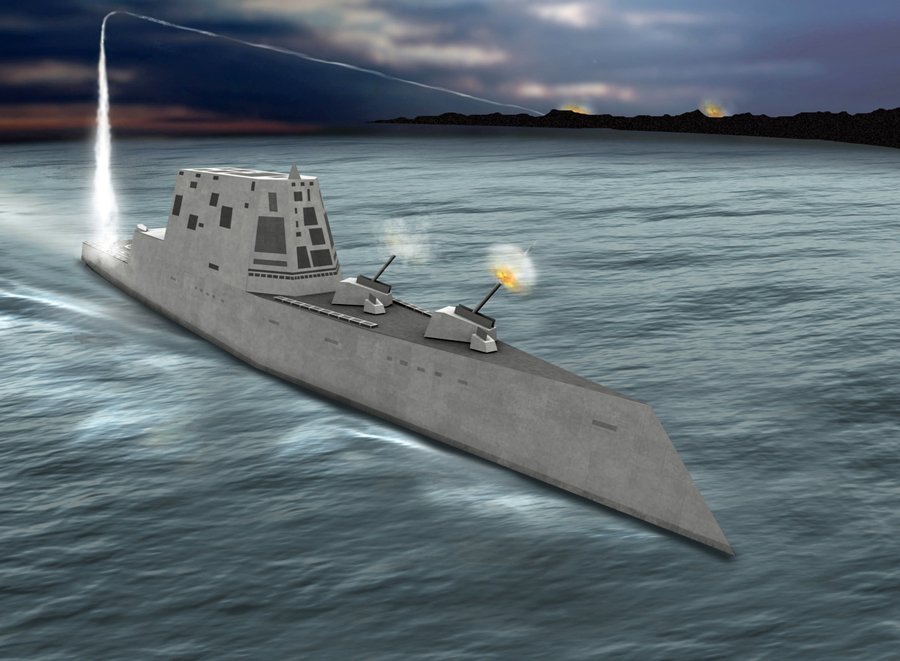 Is it possible that the Zumwalt-Class Destroyer indeed is submersible and can dive like a dolphin, and that this capability is simply classified? Sure, but DefenseReview (DR) is forced for the moment to take the Navy at its word that it’s a purely surface ship–and surface ships can be located and sunk much more easily, stealthy or not. If it does get hit by the enemy, DR hope’s the ship’s advertised level of automation and centralization, which allows the ship to run with half the current crew number, doesn’t doom it to automatically sinking. What happens if you need to seal a bunch of holes and repair critical systems real quick? Will there be enough guys on the ship to effectively fight fires? Maybe the answer’s “yes”, and maybe “it’s no”. We just don’t know, but we do know the Zumwalt will be about 100 feet longer than current destroyers. 100 feet longer, half the crew. The reader can understand our concern.

Defense Review would prefer to see a greater number of smaller, yet hyper-lethal submersible ships, including mini aircraft carriers that can surface, launch some F-35B STOVL (Short Take-Off and Landing) Lightening II fighter aircraft and other STOVL and VTOL (Vertical Take-Off and Landing) aircraft, and then submerge again in minutes. And, it would be nice if all the submersible ships could launch some of their weapons–missiles and, obviously, torpedoes–while still submerged. All of these ships would of course be ruggedly and redundantly networked, and capable of establishing and maintaining regional micro-networks, in case the central comms (communications network) goes down. This would spread the risk and make it much more difficult for the enemy to deal a crippling blow to our navy.

Even if that were to happen though, and we needed a whole fleet of new warships of all kinds, it’s probably a pretty safe bet that Raytheon will get the contract. Kidding…sort of.