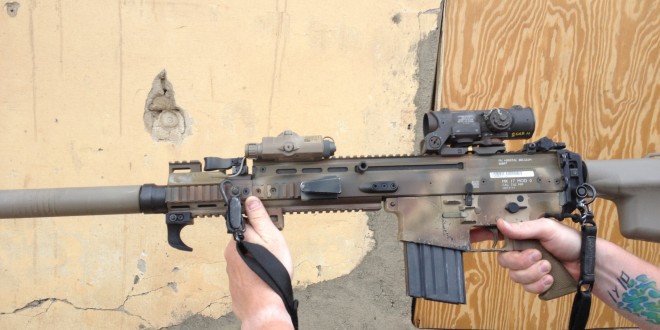 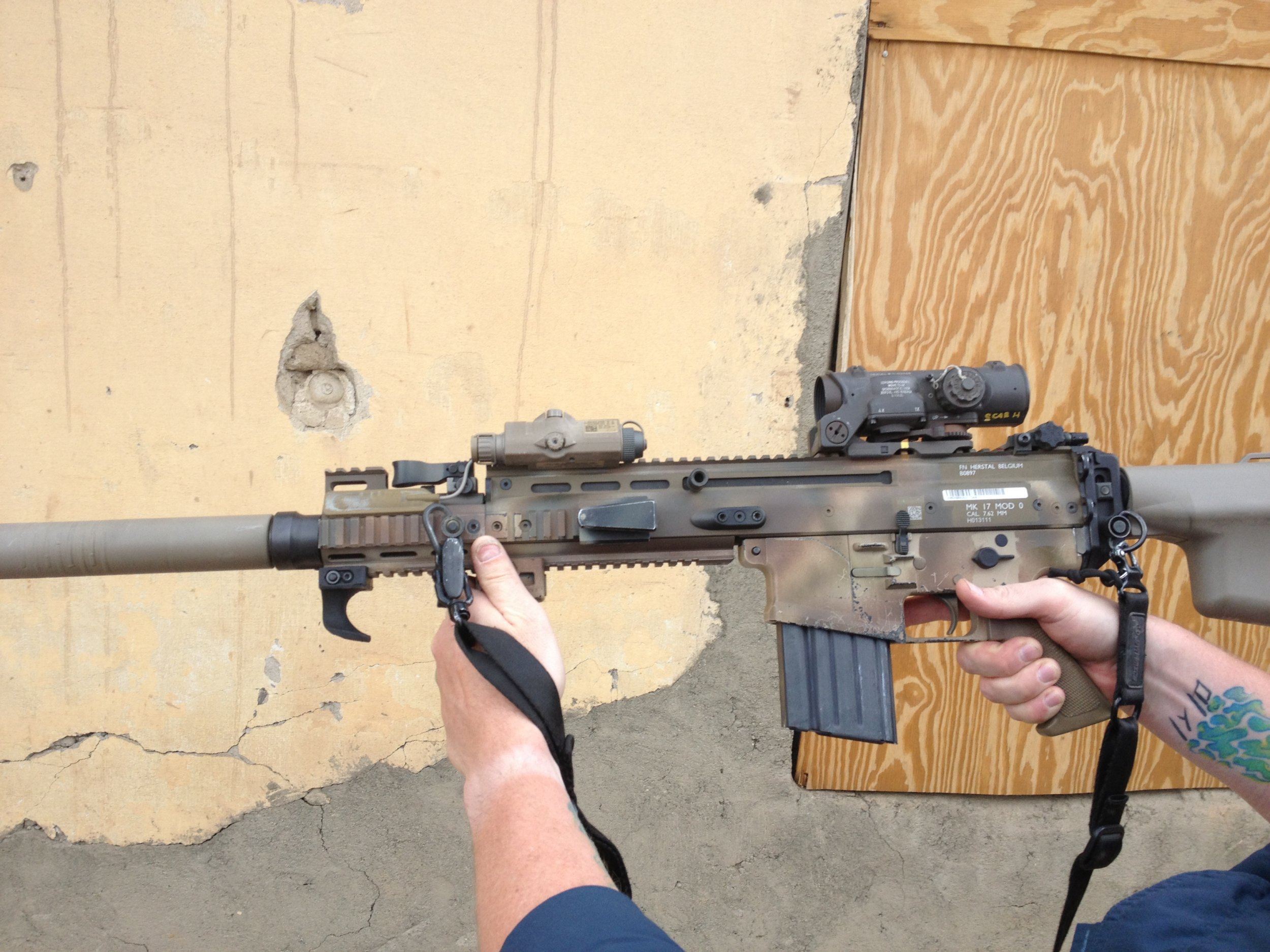 There are many benefits that follow with the FN SCAR weapons platform, but one of the first things I've noticed with the platform is the lack of useable real estate (space) on the SCAR. Now, both the SCAR Light (FN MK 16 SCAR) and SCAR Heavy (FN MK 17 SCAR) encompass the same amount of space regarding the use of Mil-Std-1913 "Picatinny" rails/tactical handguards. While less material does mean less weight, it still limits the ability of both mission essential equipment, AND it limits your choice of hand holds/shooting techniques.

Midwest Industries (MI) has come up with a simple and affordable solution to this problem in the MI SCAR Rail Extension. While other companies have as well–like Vltor, for example–MI has managed to keep the process easy to install, seamless, and visually pleasing. When I contacted them, they were eager to work with me, as I would be carrying a SCAR Heavy/MK17 while on patrol OCONUS. Needless to say, when the rail arrived, I was pleasantly surprised with not only the quality, but the fit as well. Many times, aftermarket parts for new weapons can be hit and miss. 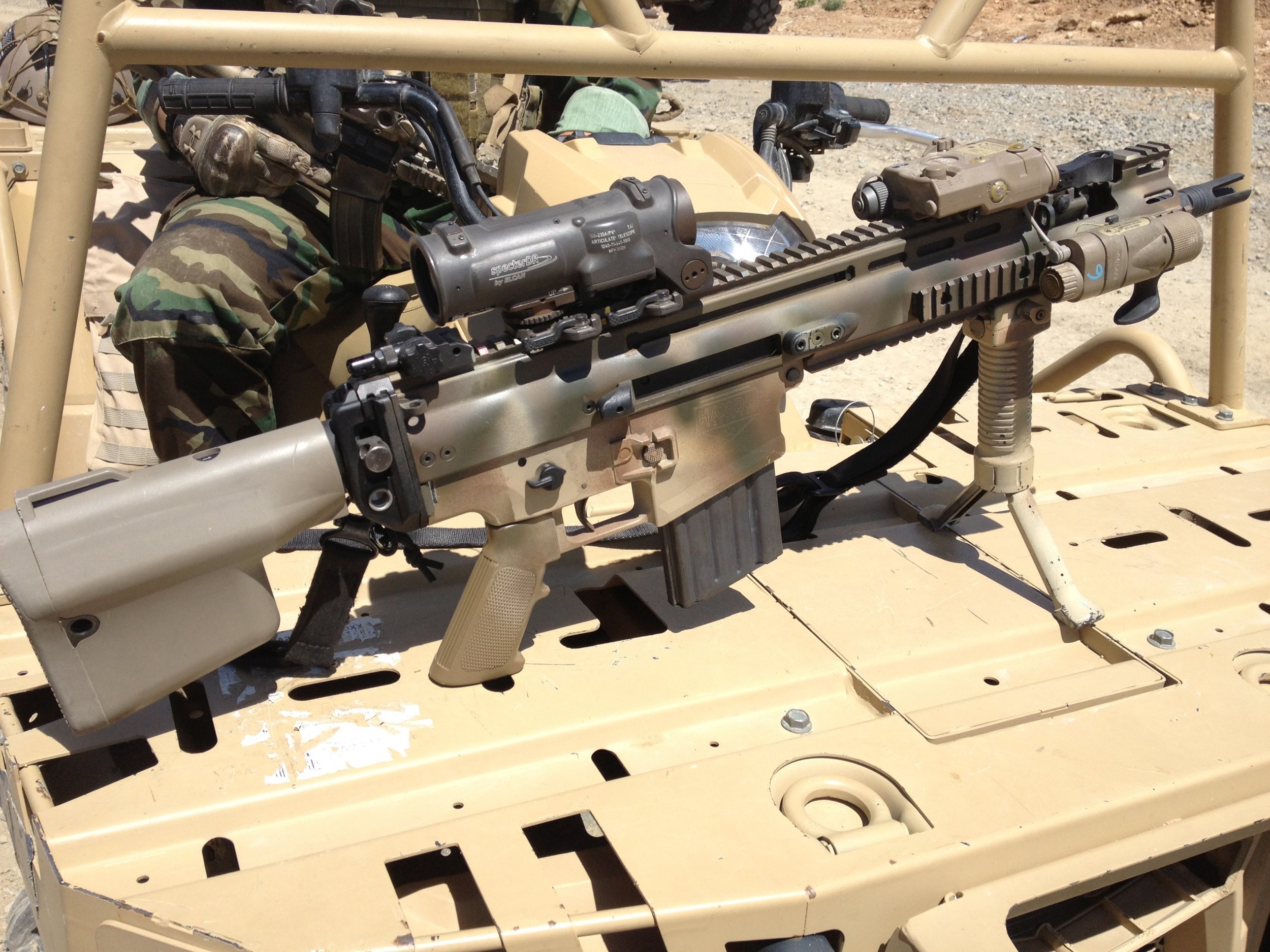 The first thing I noticed with the MI SCAR Rail Extension was the physical appearance. The product was designed to flow with the firearm, and keeps the same appearance and style that already exists on the SCAR. The craftsmanship of the rail extension is superb. MI took the time to design a truly professional piece of equipment that looks as good as it works. In other words, the form equals the function. The flow of the extension does not interfere with the feel when using the weapon. This means no sharp or abrupt edges. So, there's nothing to cause problems with hand holds, and accessory mounting is taken to maximum potential.

After reading the directions and looking over the few parts that come with the product, I was ready to install. Before going into installation, be sure that you DO NOT use the torque wrench that comes with the SCAR heavy. This torque wrench is the proper fit, but is set up for 62 lbs (plus or minus 10 lbs, as I was told). There is a varying between t25 wrenches that come with the SCAR. This is only based on what I was taught. The directions clearly dictate to use no more that 40 lbs of force. Also be aware of the Loctite on the existing screws on the SCAR. These can be a bear to unscrew and you may need to heat up the screws in order to liquefy the Loctite. So, after disassembling the barrel from the rail and changing out the trunnions, it was simple. This process only took a short time. Once in place the barrel and new rail extension was seamless. 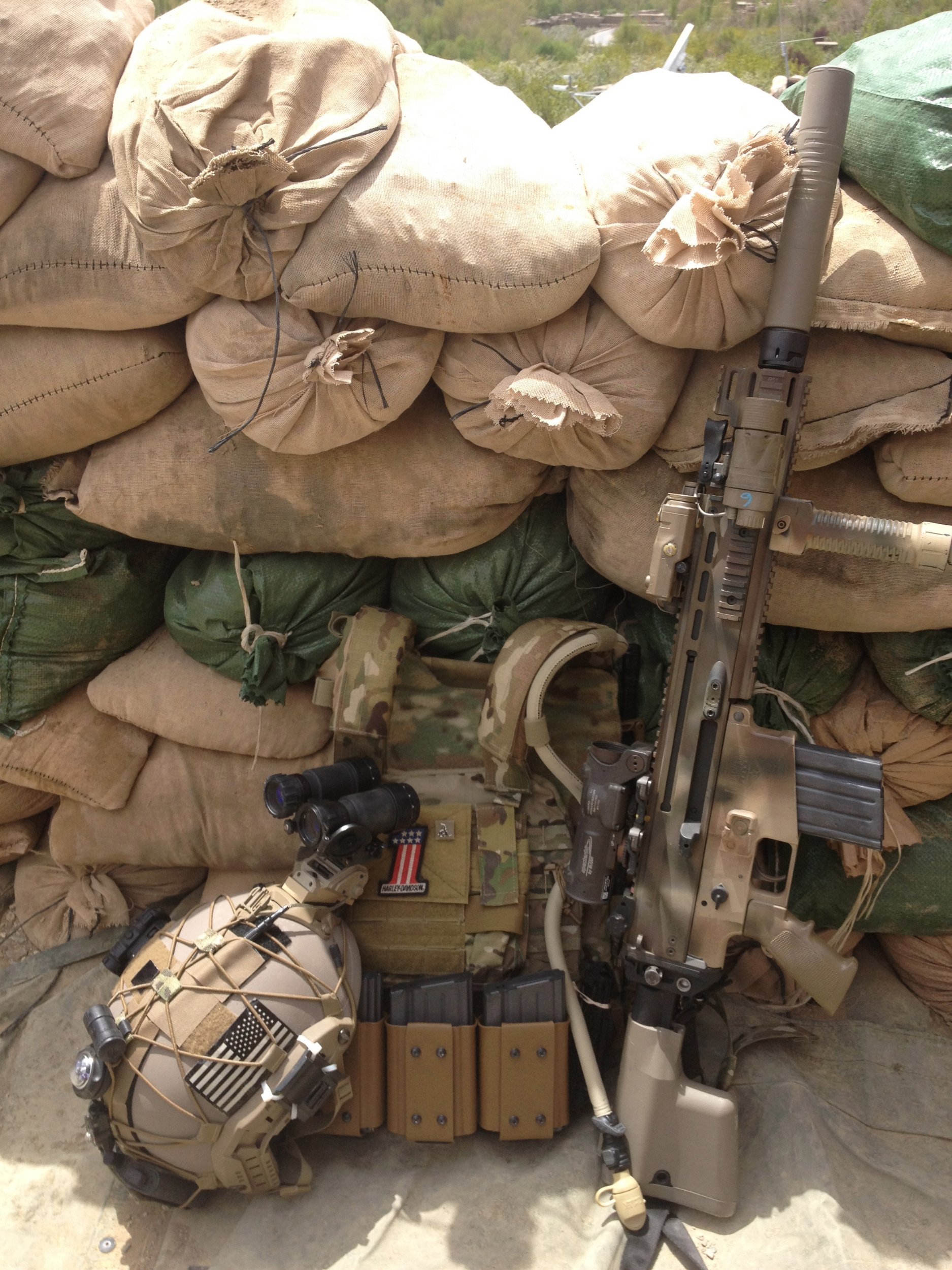 Now that I had installed the MI SCAR Rail Extension on my 13 inch CQB barrel, the first thing I found is that the rail continued all the way up to about midway up the flash hider. The flash hider on my SCAR Heavy is set up for our thread on suppressors. This created a real problem as I would be unable to mount my suppressor to the weapon with the rail extension in place. The only remedy would be to cut the needed length off of the rail to facilitate the room needed to mount my issued suppressor. After taking off about two inches it was literally the perfect length for a seamless mounting of the suppressor and maximized rail length. There was some weight gain on the front end but the ability to mount more freely and have maximized hand placement over shadowed any concerns I had with the weight gain. I also found that even under heavy shooting the rail never became too hot for me to handle, this is also helpful in terms of keeping the barrel covered when having to go hands free. A hot barrel can cause serious burns when it comes into contact with exposed skin. I also found that the rail had no wobble or movement. Again MI made the extension as if it were original equipment.

Once everything was installed and function checks were done, the only thing left was to out fit the weapon with the appropriate accessories and zero the weapon. I was also utilizing the new SCAR25 lower receiver (SR-25 Magazine Compatible Lower Upgrade to the SCAR-17) from Handl Defense along with the Vltor AR stock adapter (RE-SCAR: SCAR Receiver Extension / Stock Adapter) with a Troy Industries AR-15/M16 Lightweight Battle Axe CQB Stock. These items took this SCAR to a different level of performance that would not be possible if they were not installed. Upon shooting I noticed with the rail extension was the ability to find what ever shooting position I wanted. I was able to utilize my Grip Pod further up the rifle and added to stability and comfort. Because the standard rail extension has a cut out for the front site/ gas regulator it allowed for some adjustment to be done, on my MI SSR SCAR Rail Extension (for FN MK 20 SSR) it was seamless but understand you will have to remove the front site and it is a more complicated apparatus than it first appears. Both rails from MI are professional grade and are a perfect fit for both military/LE and civilian use. 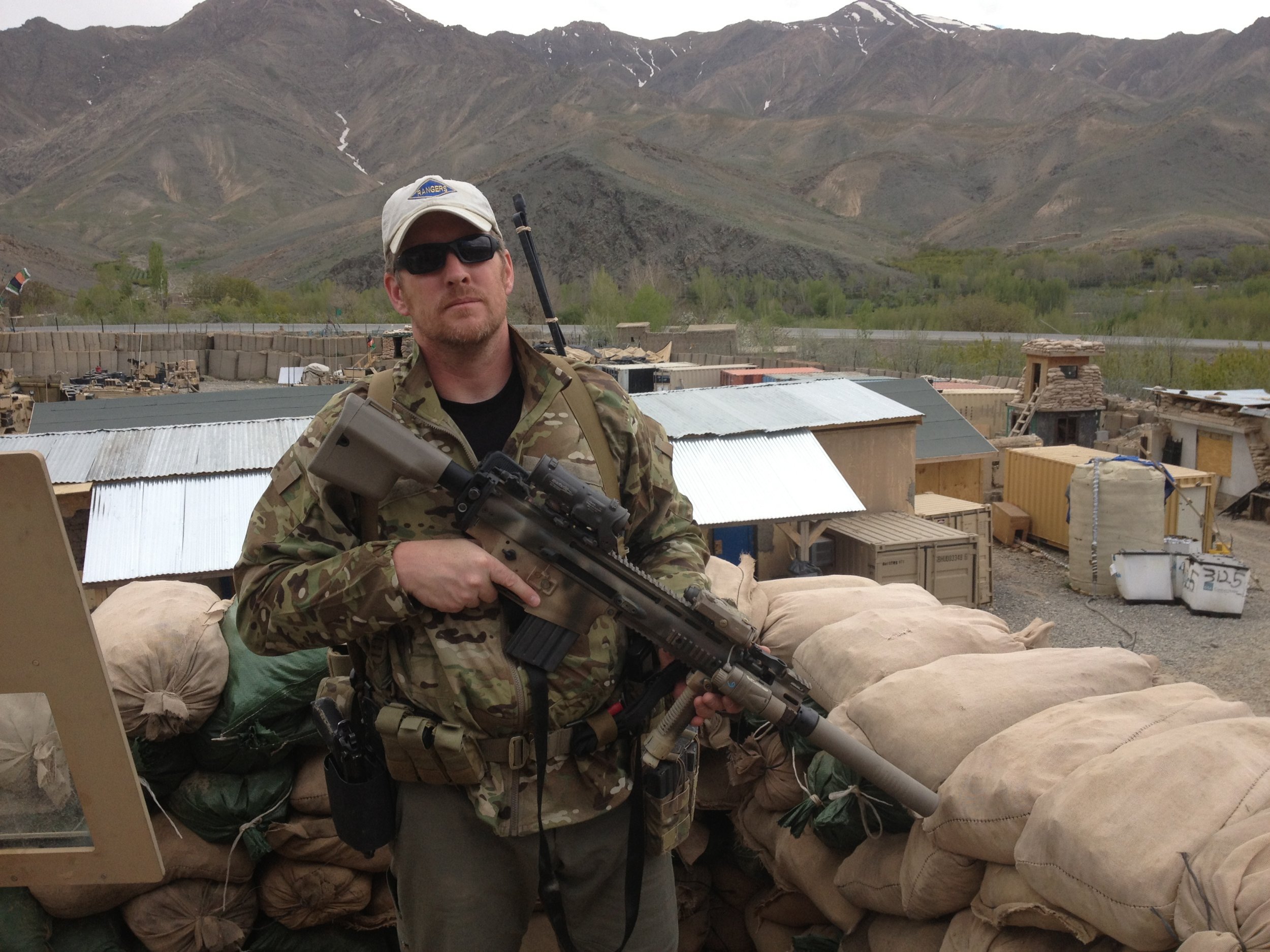 While on patrol, the rail extension was greatly appreciated, it allowed for a more comfortable carry in a variety of situations. While it did add to muzzle weight, this was mitigated by the fact that I could choke up on the front of the gun as needed. There are a lot of times I do not want to run a sling if I am moving in very dense vegetation, this was more that apparent in the regions I was operating in when I was deployed to Afghanistan. The rail extension allowed me to move my hands easily to adjust my hand holds as I saw fit when negotiating obstacles. The MI rail extension held up perfectly to the abuse that was dished out, I saw no problems with hardware loosening, zeros not being held, or any issues with the materials used. The rail met and exceeded my expectations. In fact the rail allowed me to ergonomically set up my rifle in a manner that would of not been accessible before.

In closing, the Midwest Industries MI SCAR Rail Extensions (standard and SSR) are superbly built, well engineered, and aesthetically pleasing. There are only a few things I would recommend. In terms of Mil/LE (Military/Law Enforcement) applications, I would have MI offer a slightly shorter model for weapons with short barrels. This would enable them to not only cut some weight, but, more importantly, allow for the use of muzzle cans (silencers/sound suppressors) with short barrels. The other would be to offer either a Key Mod variant [like the BCM KeyMod Handguard/Rail (KMR), for example] or a version that allows for removable rails. This would not only lighten up the rail but keep it smooth and comfortable for carry. This would enable the user to choose where rails are needed based on mission requirements and shooting comfort. These product-improvement suggestions aside, the MI SCAR Rail Extension is a superb product, in keeping with Midwest Industries' impeccable reputation and is in my professional opinion, a must for any SCAR owner. 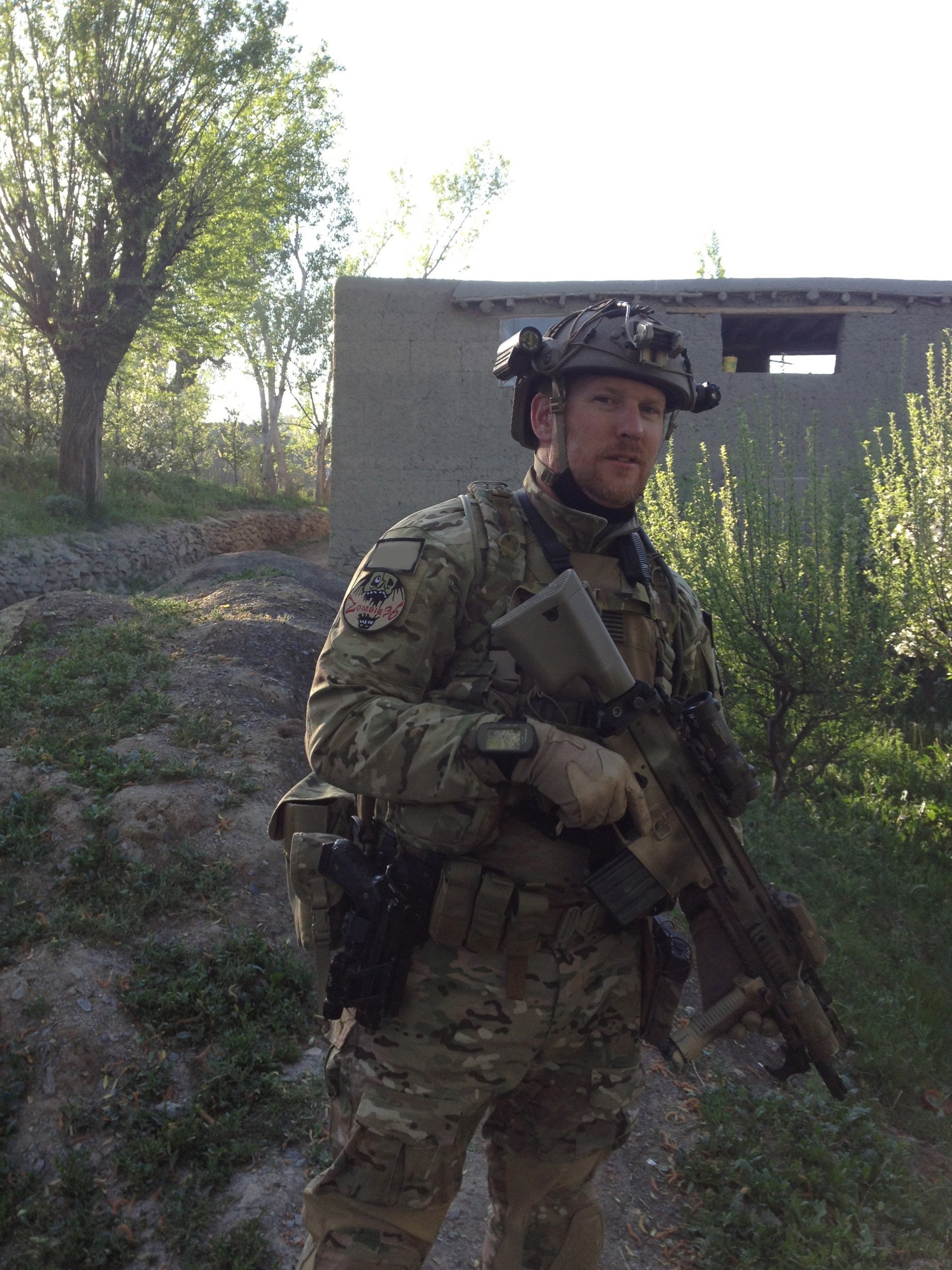 © Copyright 2013 DefenseReview.com (DR) and Toby Melville. All rights reserved. This material may not be published, broadcast, rewritten or redistributed without receiving permission and providing proper credit and appropriate links.

David Crane started publishing online in 2001. Since that time, governments, military organizations, Special Operators (i.e. professional trigger pullers), agencies, and civilian tactical shooters the world over have come to depend on Defense Review as the authoritative source of news and information on "the latest and greatest" in the field of military defense and tactical technology and hardware, including tactical firearms, ammunition, equipment, gear, and training.
Previous SmartWater CSI Invisible Crime-Fighting Spray Paints Criminals Green and Links them to the Crime Scene
Next ROSCH Works (RW) SL1 Sight Light Integrated Weapon Light/Front Sight BUIS: Making the Most of Your AR-15/M4/M4A1 Carbine/SBR’s Tactical Real Estate