All photos and video contained in this article are courtesy of Chen Lee, writer/photographer.

For the longest time, I was against the idea of adding a bipod to a tactical carbine or rifle. I thought “why in the world do you need a bipod on a gun that you’re likely only going to shoot out to 400 meters?” Going to solid-braced prone, breathing, and quickly placing a well aimed shot out to 400m is accomplished through practice. So, why do I need a vertical foregrip (VFG) with an extendable leg that doubles as a bipod? 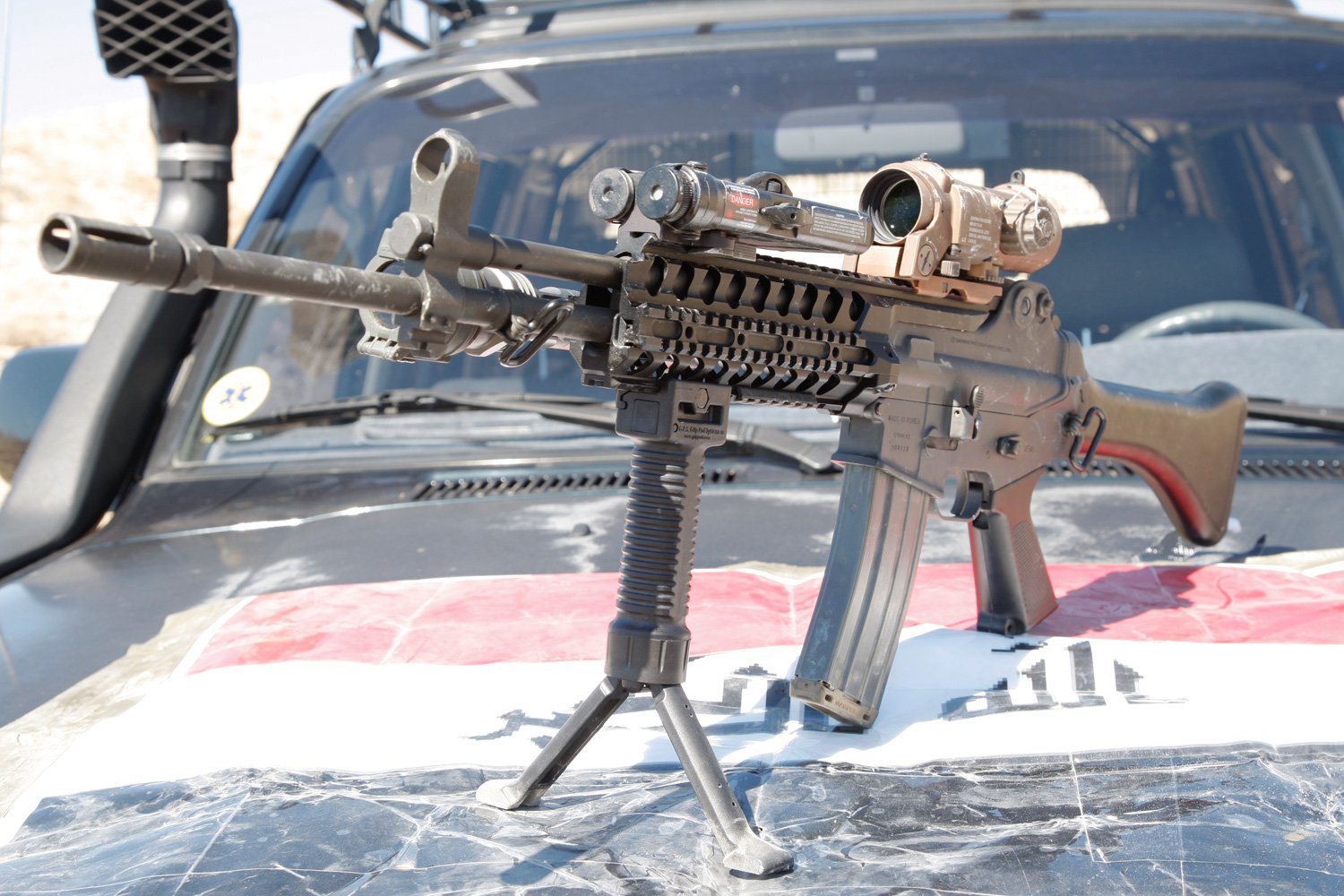 Quickly fast-forward to 2009, and the paradigm shift that occurred in my whole outlook on the subject during a recent trip. During a visit to a group of go-fast guys near San Diego, I saw this MK18 5.56mm AR SBR (Short Barreled Rifle) with a Grip Pod System (NSN: 1005-01-563-8451) vertical foregrip/bipod/weapon stabilizer on it. I jokingly asked the owner when in the world would someone have the opportunity to deploy the bipod so they can make a distant shot? The gun won’t even reach out that far…!!! He looked over at me and said “let’s do a quick qual (qualifying run) from 50 meters (50m) against a 10” steel plate, with 3x magazines with five rounds each. We will time it and see who finishes first.”

On the first try, I get smoked, but I’m not really surprised. After all, those guys shoot for a living and they shoot more rounds in a month than I could in a year. So he gives me a one-second handicap. Again, I lose. Then I ask to try this test again, now focusing more on his techniques than trying to beat him. I notice with the handicap, I am beating him to the five shot kneeling phase, but his superior shooting skills start to even up the shot placement during the kneeling phase, and as soon as we hit the dirt during the prone phase, he just takes over.

Why is his prone position that much faster than mine? Is he that much better? Is he that fast? Well, my buddy then asks me to remove my VFG (vertical foregrip) and place a Grip Pod from one of the guns at the range. He gives me some pointers on how to deploy the GripPod.

So, I practiced with this contraption a few times and made sure I was able to utilize it with some familiarity, then we did the test again. The one second handicap was still in effect, but this time I was able to finish much closer to his time. I was not able to beat him, but in the end, my time was respectable enough for a civilian shooter.

That’s when a light bulb started to come on in my tiny little brain, and I noticed that, with the Grip Pod, I didn’t have to go into the braced prone and position my body in order to gain that sight picture. With the Grip Pod, I was able to drop to the standard prone position with the Pod deployed and get right to shooting at my target. The red dot came right to my eyes, and the sight picture was acquired that much faster.

My friend told me he doesn’t consider the Grip Pod to be a bipod, but more like a weapon stabilization device. He began to explain how the Grip Pod is more of a stabilizer that he utilizes as a VFG most of the time. However, when it comes time to go prone (and he said he’s gone prone often in his time in the sandbox), he can utilize the Pod to help with placing a quick-engagement shot on target that might be 100m away or just a block down the street. The Pod can then be retracted with one hand if he continues to move or just leave it deployed.

The Pod not only helps with prone shooting, but when placing a rifle over the parapet off the roof, a jagged wall, or any position that requires placing the rifle on a surface, he utilizes the Grip Pod to help with stabilizing the weapons platform. He even runs his MK48 (FN MK48 MOD 1) machine gun with the Grip Pod. Although Grip Pod Systems makes a SAW/LMG (Squad Automatic Weapon/Light Machine Gun) version, he utilizes the standard military GripPod on his MK48. The Grip Pod displays its ability to enhance the host weapon system even more on a LMG/SAW, since the operator no longer has to worry about deploying a bipod one leg at a time, or worry about the legs getting in the way while he’s moving and shooting. He can simply deploy the Pod when he needs it. The rest of the time, the Pod’s fast-deploy legs are completely out of the way. 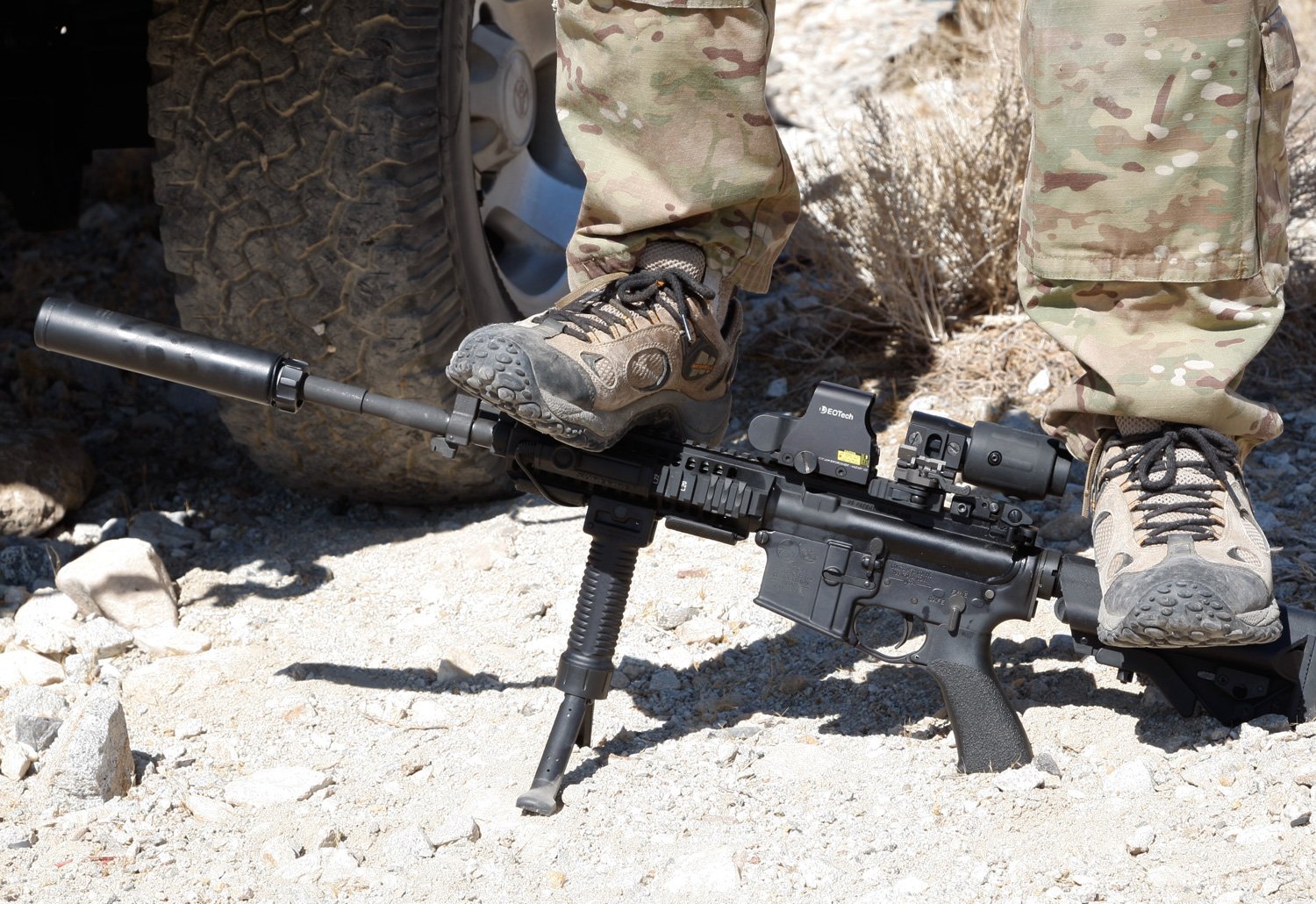 Bottom line, the Grip Pod is never as intrusive as the bipod on the Mk48. Adding to the Grip Pod’s advantage it’s relatively light weight, considering its internal components and capabilities. The military-version Grip Pod (GPS02) is actually 2oz less than a VFG with the quick-release attachment. His team even runs the GripPod on their RECCE rifles where it doubles as a bipod and a VFG.

Anyway, based on my transformative experience, I purchased my very own Grip Pod, online (right off the web, nice and easy!). Specifically, I bought the GPSO2 military-version Grip Pod with a steel insert inside the legs. When placed next to a KAC VFG, the Grip Pod is about an inch longer, and the overall bulk is increased, but not to an alarming degree, especially when compared to a Surefire M900. The GripPod is actually shorter in length than the M900. So, for a VFG that can double as a fast-deploy bipod/weapon stabilization device, the Grip Pod is actually a very compact, lightweight, and acceptable package.

The LE model Grip Pod is only 6 ounces (6 oz) total, and the military model Grip Pod is only 7 ounces (7 oz) total, which puts them both in the same weight class as most plastic vertical foregrips on the market that don’t have a quick-release or a bipod–and the military Grip Pod is still 2 ounces (2oz) lighter than a normal plastic QD VFG (quick-detach vertical foregrip) with quick-release and no bipod! The Grip Pod is also smaller than a Surefire M900 in size. Keep in mind that most bipods that the U.S. Army tested against the Grip Pod, which the Pod beat, weigh between 1-2.5 lbs! And here’s the kicker: not only did the Army adopt the Grip Pod, but so did the U.S. Marine Corps, the National Guard, the U.S. Air Force, and the British Army. 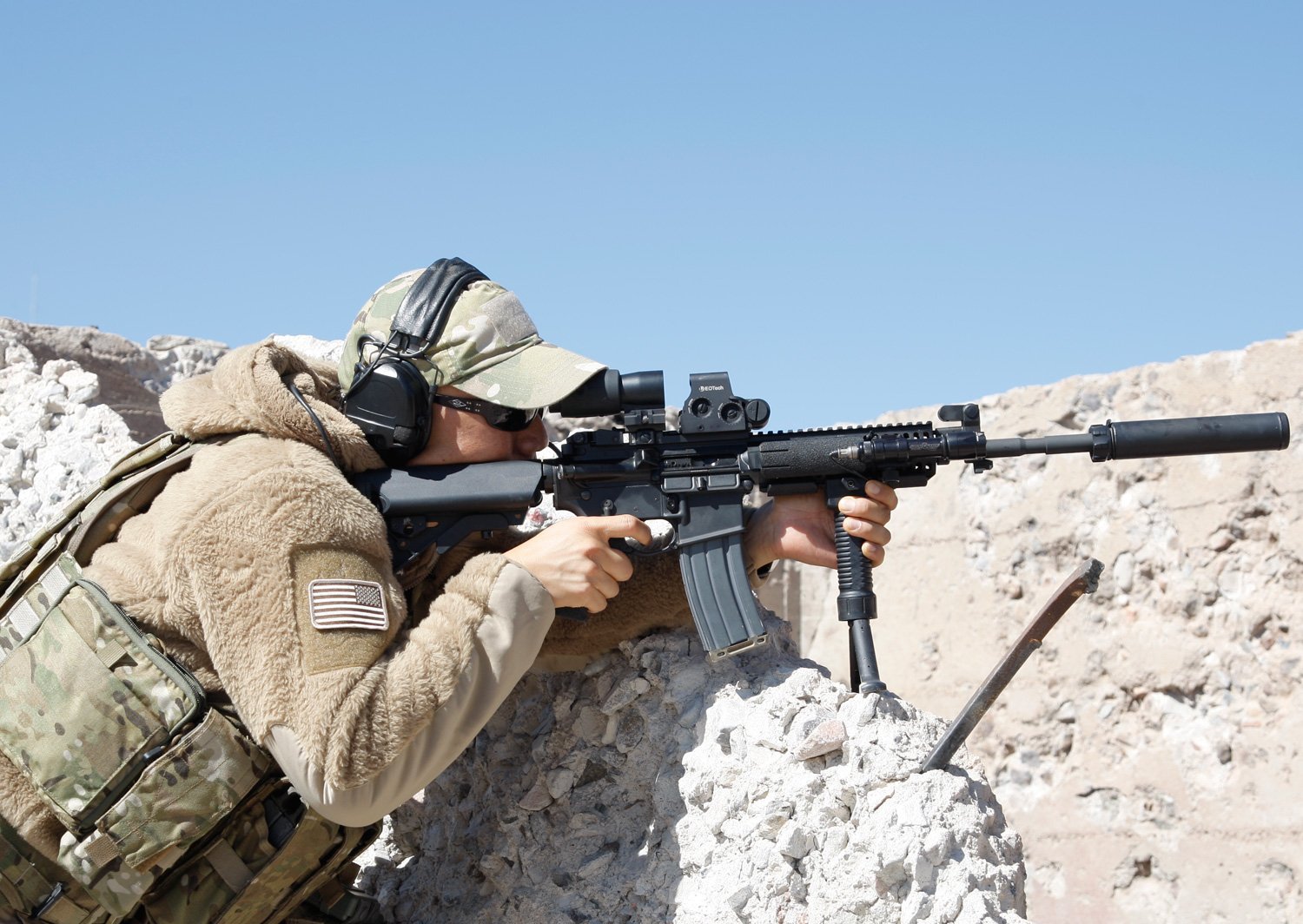 I have now been shooting my Colt LE6940 with the Grip Pod System on it for the past three months. I must admit that prior to my transformative side-by-side shooting experience vs. my SpecOps friend, I would never have thought a fast-deploy weapon stabilization device/bipod like the Grip Pod would be required on a carbine, and it just looked ugly to me. But after months of use, I’ve changed my mind about it. The Grip Pod has seriously grown on me. The more I use it, the more I like the capability and performance enhancement added to my lowly shooting skills, or anyone’s shooting skills, for that matter. The Pod allows me to place shots faster when going prone, and its bulk seems to disappear over time. The GripPod comes in particularly handy when I shoot my 3 gun matches, as I’m able to move from position to position quickly and deploy the Pod whenever necessary. It is just fast, fast, and fast!

So, do I like it? For me, it’s a mostly (and enthusiastic) “yes” answer. I really like it, and I enjoy the tactical shooting advantage it gives me. However, I’d like to see if its design can be streamlined a bit more. For example, I’d remove the wingnut and replace it with another locking solution, since I grip high on my VFG and the wing nut gets in the way a bit. Not too often has a product that I initially disliked changed my opinion so radically, but the Grip Pod has definitely done so and made a deep impression on my weapon setup. I wouldn’t use it as a sniper rifle bipod, but on a short carbine, or even a perimeter rifle, the GripPod is a great addition. And, with an aluminum-body SAW model Grip Pod, the M249 crowd has an easily-deployable, lightweight product that is far superior to the standard M249 bipod. 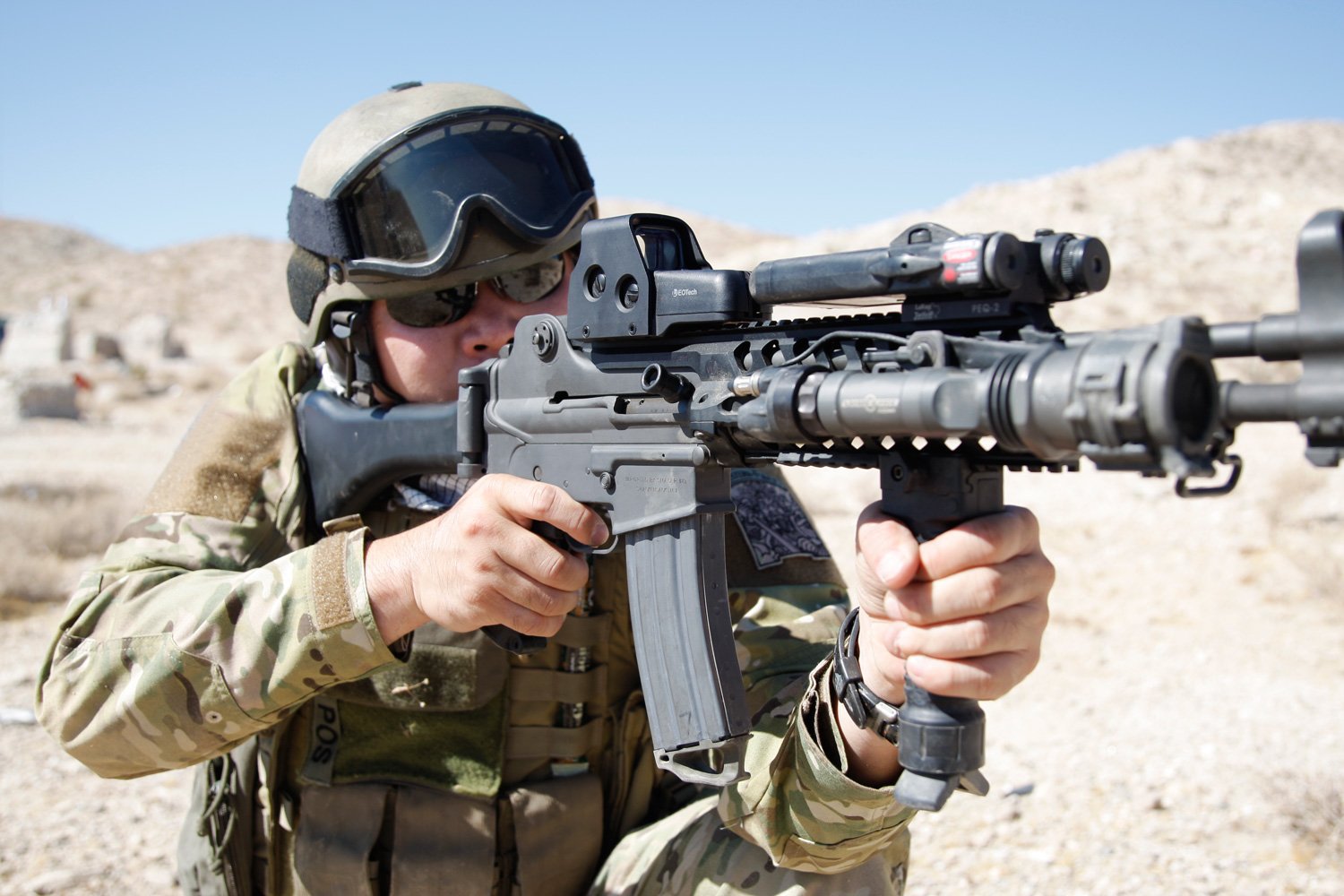 The Grip Pod is a viable design and a definite performance enhancer for any type of dynamic tactical shooting, including combat and competition shooting. This is evidenced by the millions of Grip Pods already purchased by the U.S. Army, Marines, Navy, and Air Force. The Grip Pod’s service-wide acceptance and acquisition history is also evidence that it’s definitely here to stay and worth evaluating for yourself, hands-on. You really have to try it for yourself to understand the tactical shooting advantage it provides. I certainly didn’t “get it” until I tried it out, myself. The Grip Pod, ungainly looking as it may be at first glance, is a product with a valuable purpose and bright future in modern military small arms deployment. Will I continue to use it? YES!

Editor’s Note: Grip Pod Systems now offers a less expensive LE model (Law Enforcement model) Grip Pod System, and the Grip Pod is now available with either a single-side or double-side (short) Mil-Std-1913 “Picatinny” Light Rail Module as an additional option (added cost item) , in case you’d like to mount a tactical white light or laser sight to your Pod. If you’d like to purchase a Grip Pod System and/or one of the optional light rail modules for you carbine, rifle, or SBR, DefenseReview recommends you purchase it/them from a licensed/authorized Grip Pod System dealer/distributor. Mounting Solutions Plus (MSP), owned and operated by Ned Scheer, is one such authorized dealer, and their full contact info is listed below.

Click on this link to view all of the available Grip Pod products on MSP’s website and purchase them online. 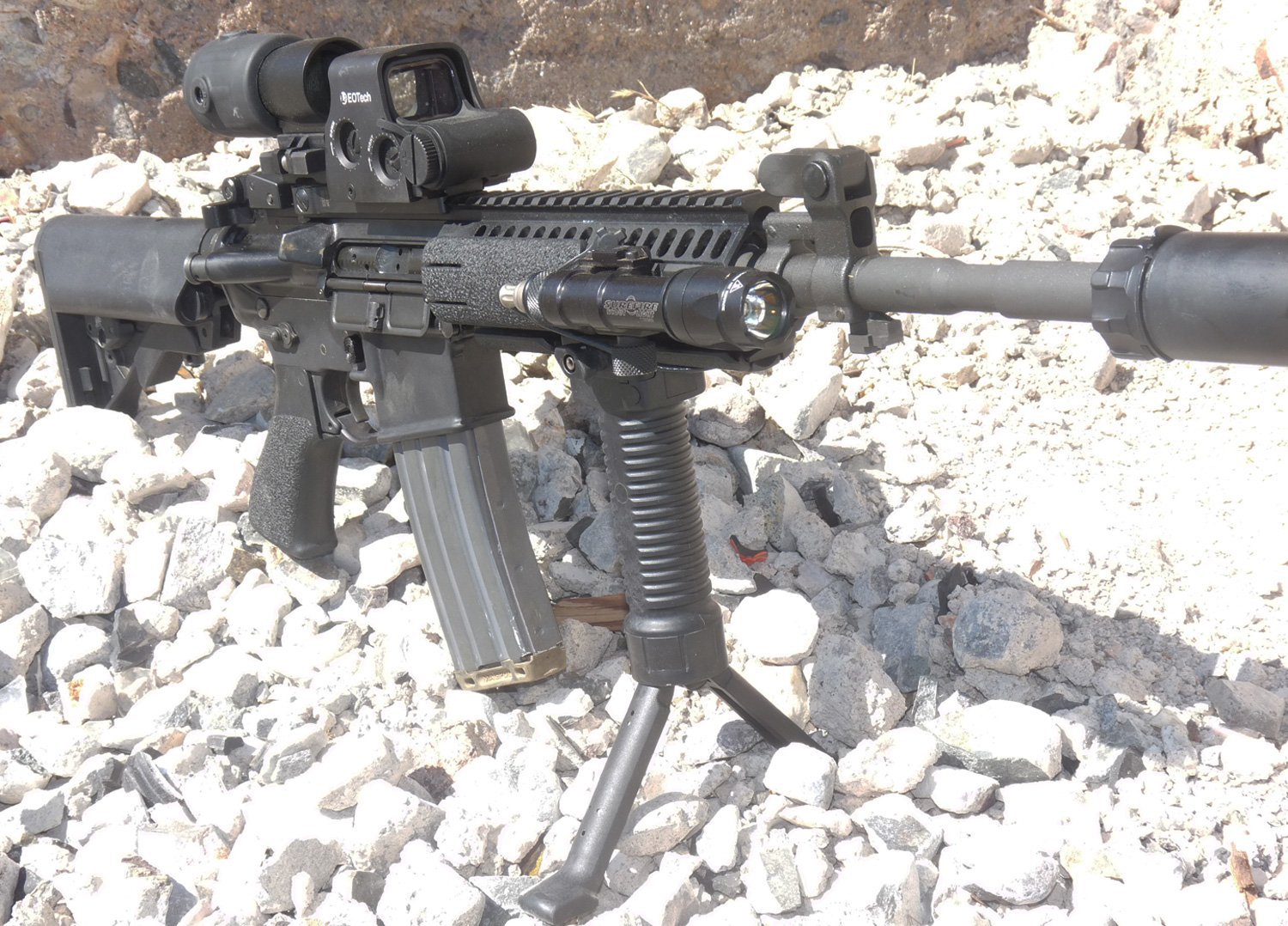 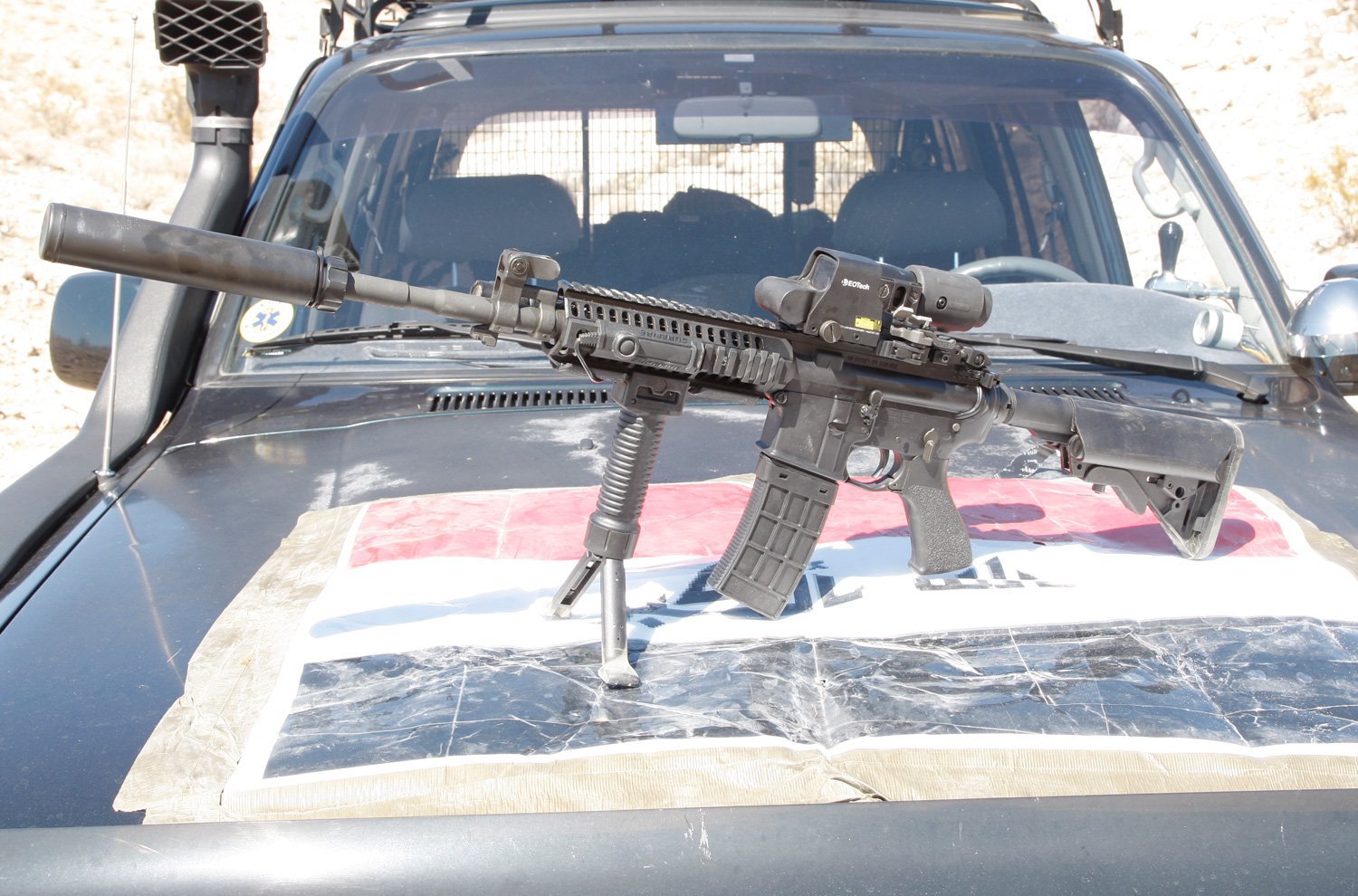 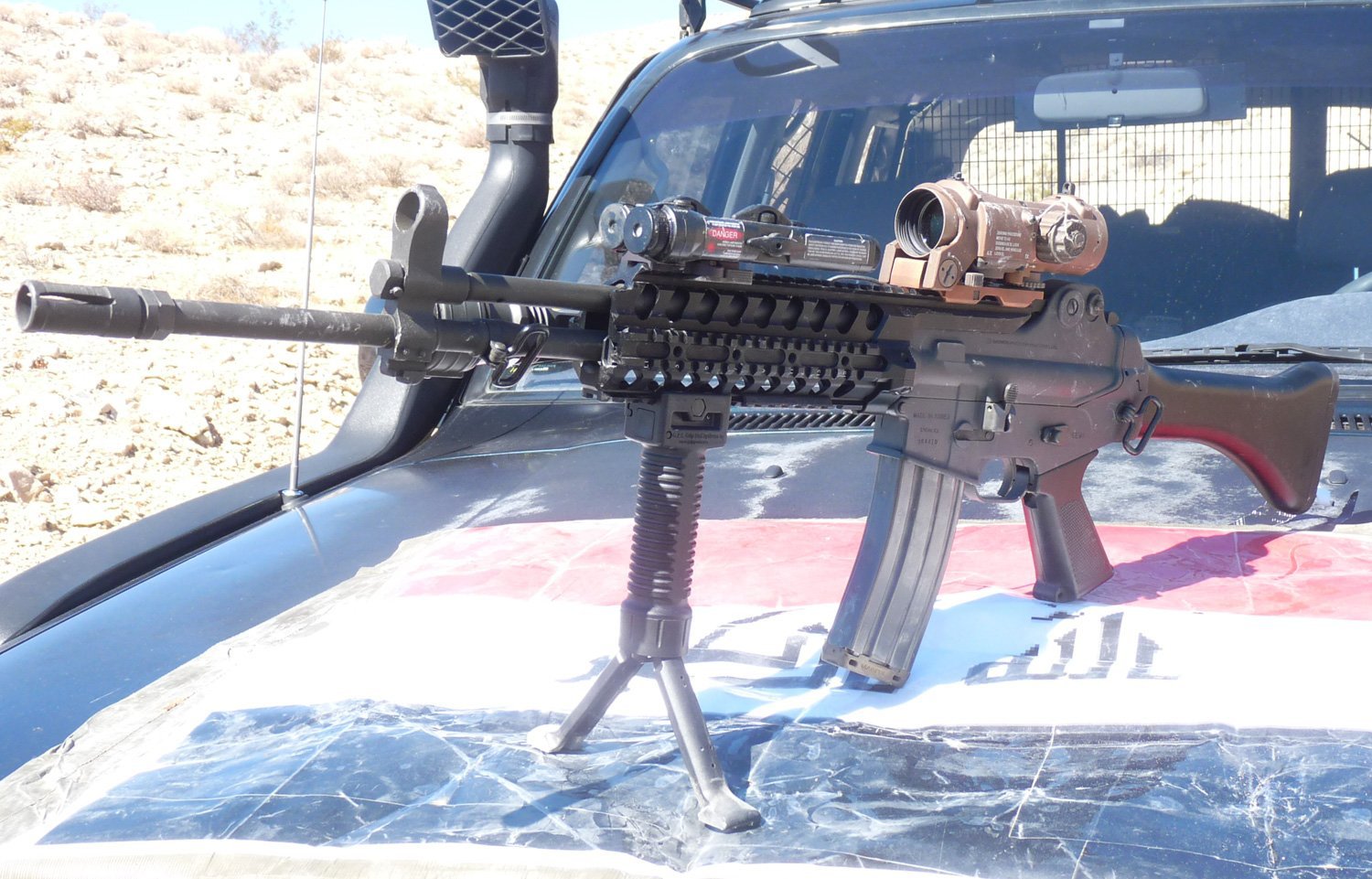 Grip Pod Vertical Foregrip/Bipod and Weapon Stabilizer: Is it a Viable Option for Your Tactical Carbine/Rifle? by David Crane

David Crane started publishing online in 2001. Since that time, governments, military organizations, Special Operators (i.e. professional trigger pullers), agencies, and civilian tactical shooters the world over have come to depend on Defense Review as the authoritative source of news and information on "the latest and greatest" in the field of military defense and tactical technology and hardware, including tactical firearms, ammunition, equipment, gear, and training.
Previous FN M240L 7.62mm MMG (Medium Machine Gun): $12.5M for FN Manufacturing, a Lighter 7.62mm Machine Gun for U.S. Army Infantry Troops
Next Need Affordable Quality Rifle and Pistol Ammo Right Now? Lucky Gunner Ammo (LuckyGunner.com) has Ammunition IN STOCK and Ready to Ship!