All photographic images contained in this article were taken by
DefenseReview.com, and are the exclusive property of
DefenseReview.com. DefenseReview.com owns the copyright on these
photos. All photos were shot with an Olympus Stylus 790 SW 7.1-megapixel digital camera, which is advertised as “shock + waterproof”.

It of course goes without saying that we… 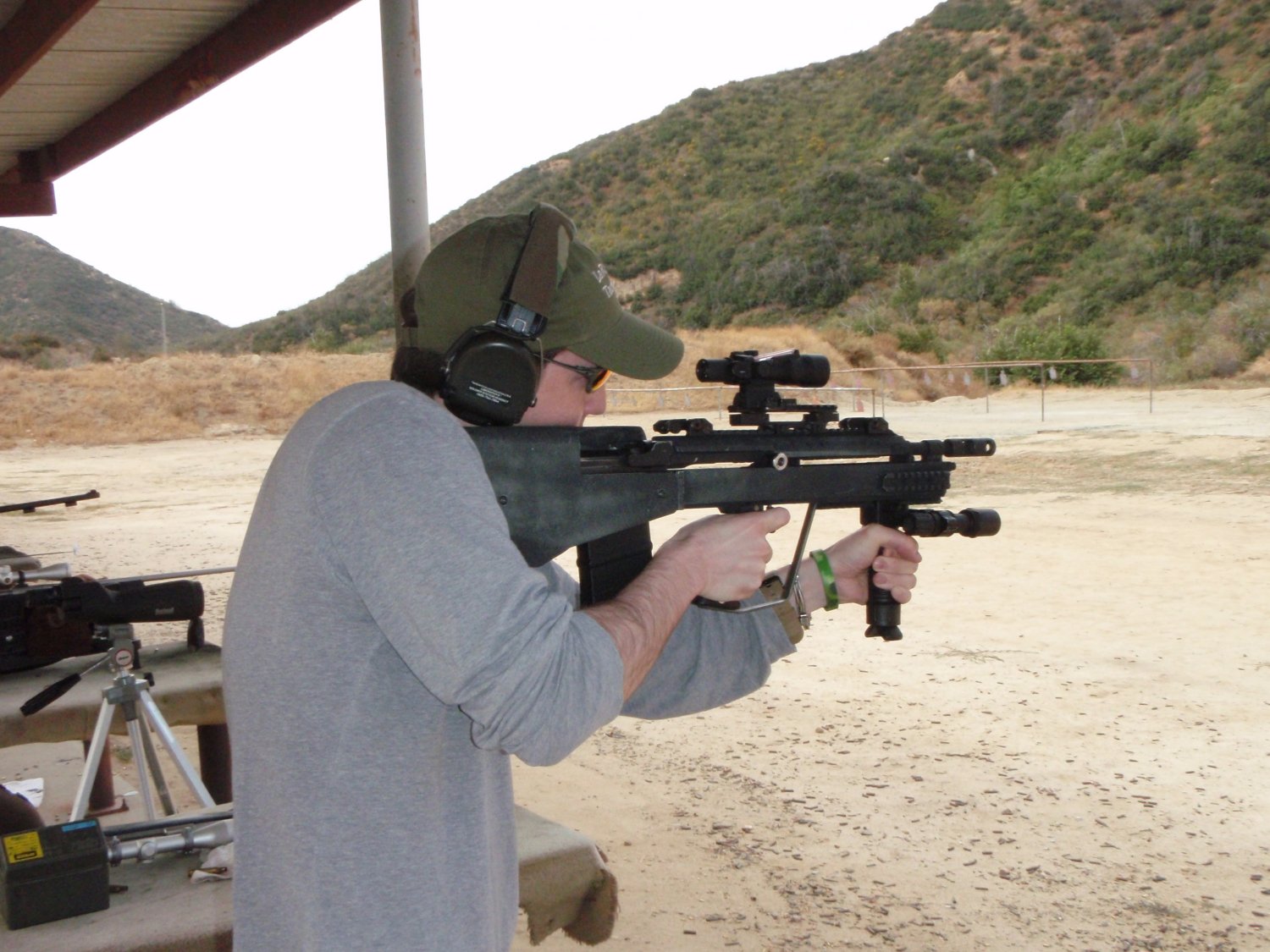 test-fired the BullDog 762 bullpup battle rifle right then and there–and came away very impressed with it. Normally, we’re not crazy about bullpup rifles, carbines or subcarbines/SBRs, but the BullDog762 is the exception to the rule. Getting the weight of the M14/M1A further back really eases handling and shooting the gun offhand, with the exception of reloading, which still requires the usual bullpup acclimation and retraining. Bullpups are simply more awkward and less ergonomic to reload–no way around it.

Other than that, though, the BullDog 762 is really slick and enjoyable to handle and shoot. Not only is it better balanced with the weight further back than on a standard M14/M1A rifle, but it also sports a well-designed, ergonomic left-side-mounted knob-style charging/cocking handle in addition to a right-side-situated, cylindrical-knob-style cocking/charging handle. This makes the BullDog762 battle/tactical rifle more ambidextrous to handle and easier to operate (again, with the exception of the weapon-reloading procedure) than a standard M14/M1A rifle. Cartridge ejection is still out the right side of the weapon, though. 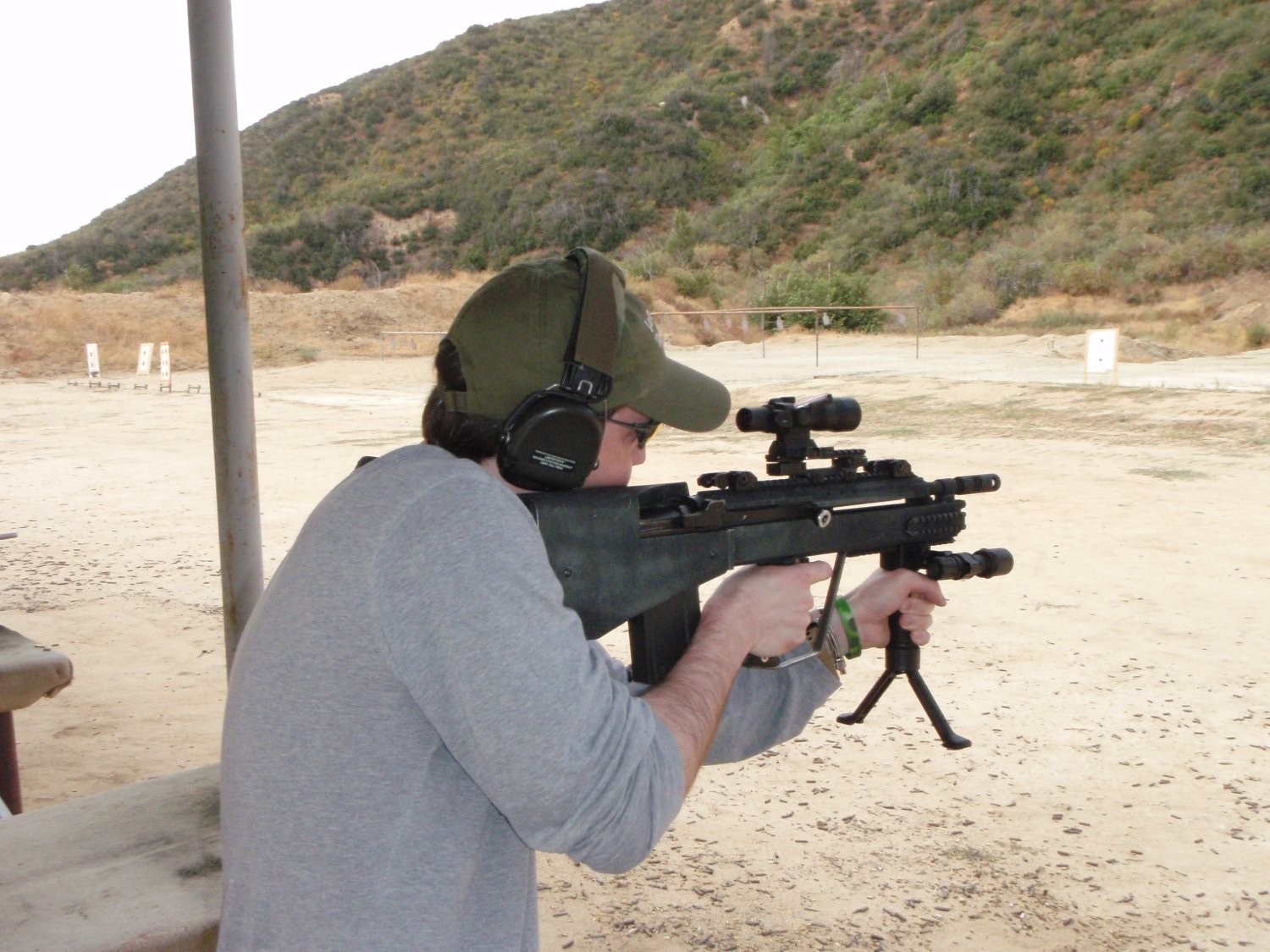 Defense Review test-fired the BullDog 762 tactical bullpup M14/M1A rifle with two different barrel lengths, one a standard rifle-length barrel, and the other a carbine-length barrel. We’re not sure of the exact length of each barrel, yet, but we’ll find out and update this article accordingly.

Trigger pull a.k.a. trigger action was excellent, due to the BullDog762 rifle’s trigger system design, which “eliminates all the problems that bullpup’s have” in this specific area. SRSS describes the trigger system like this: “The trigger/transfer rod is submerged in the stock and to some degree floats and is carried by the rear/original trigger. The safety is just above the pistol grip for your right hand and can be turned off and on by the right thumb. Our trigger rod adds 1/2 pound to whatever your trigger pressure is on your rifle. It feels like your original two stage trigger.” 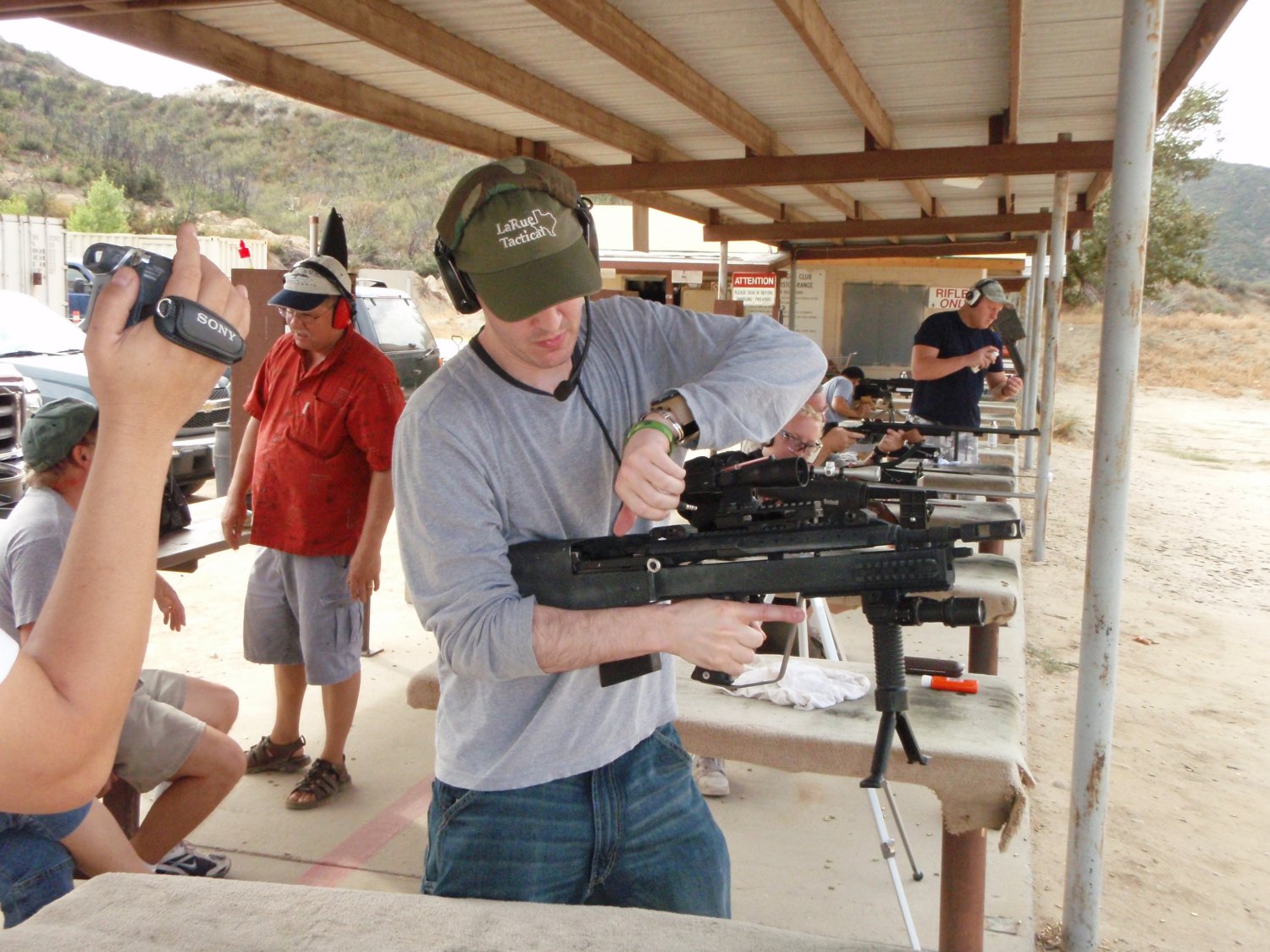 DefenseReview found the BullDog 762 to be accurate (out to a couple hundred yards), reliable, and easy to handle and operate during our relatively short firing session. Our time was limited because we were primarily there to test-fire FERFRANS’ new piston-driven SBRs (suppressed and unsuppressed), and Ferdie’s time was limited.  We really appreciated the weight-distribution it offers, making it seem significantly lighter than a standard M14/M1A rifle when handling and operating it off-hand.

DefRev looks forward to performing a lengthier and more intensive firing session with the BullDog762 at some point in the not-too-distant future, but our initial impressions of it were highly positive, and we definitely see the utility in getting the M14/M1A’s weight (and length) further back and the weapon’s overall length shorter, particularly for military operators who may have to hump their gun over long distances and shoot the weapon extensively off-hand in both CQB and medium-to-long-range engagements. A bullpup M14/M1A can even be advantageous when firing from the bipod in a situation where you don’t want the barrel sticking out so far. All around, the SRSS BullDog762 7.62mm/.308 Win. battle/tactical rifle seems like a really great idea, and gets the DefRev thumbs up with regard to both concept AND execution.

Bottom line, if you’ve got a standard M14/M1A rifle that you’d like to turn into a shorter-length bullpup-config, or you don’t have a 7.62mm tactical rifle, yet, but are thinking of acquiring one, you might want to give the BullDog 762 a look, and give Sgt. Cabral a call. It’s a cool system. 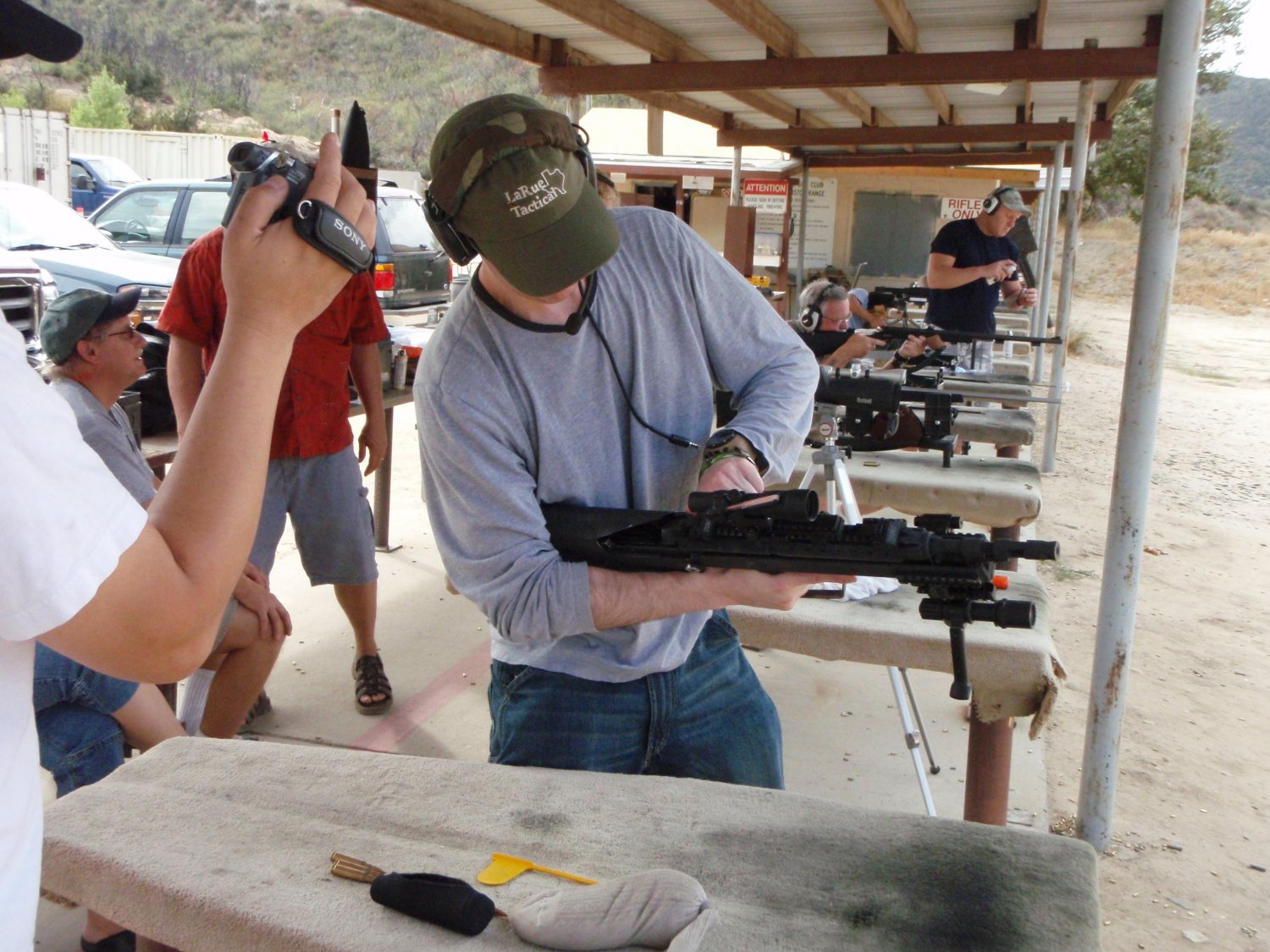 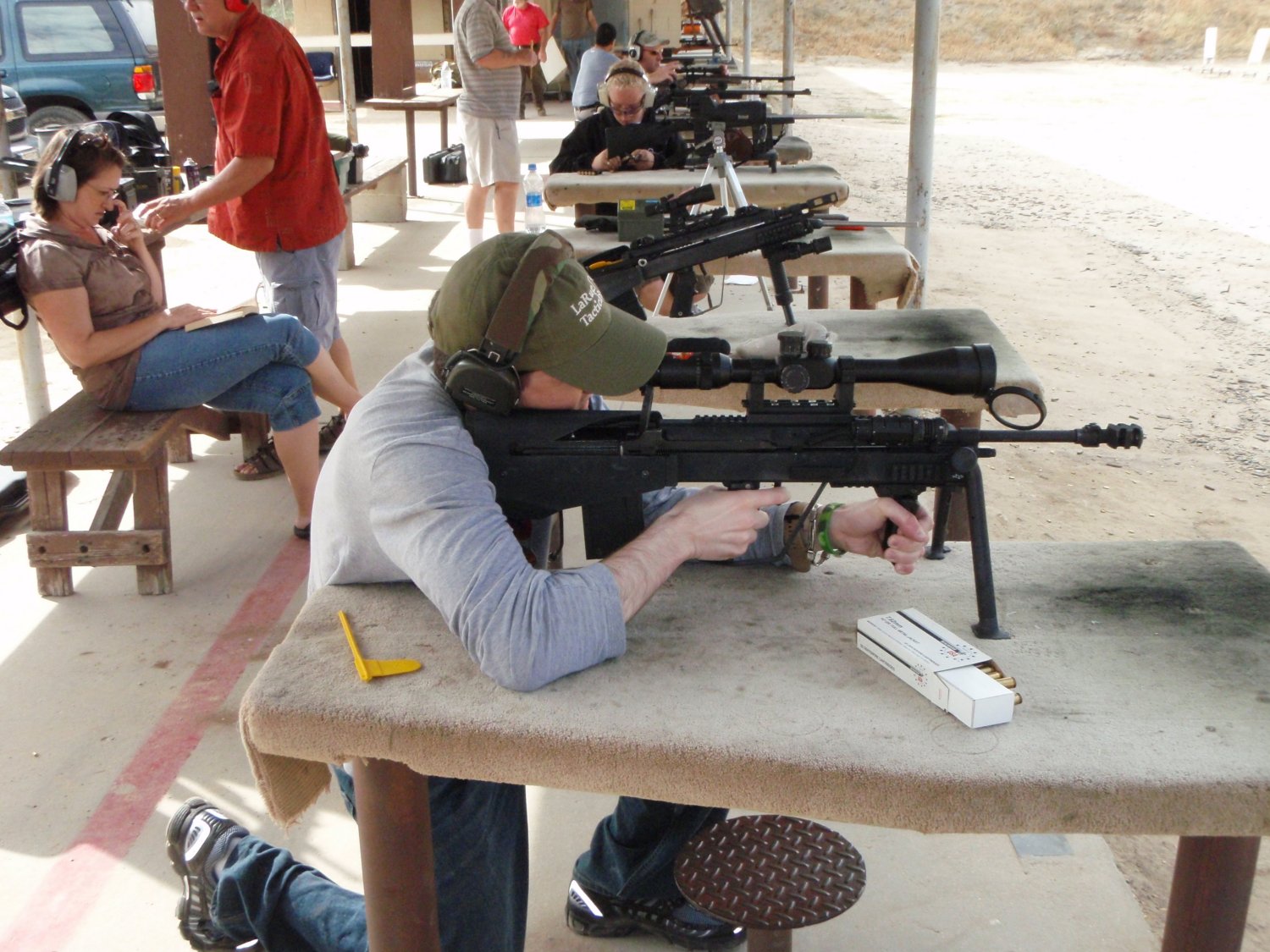 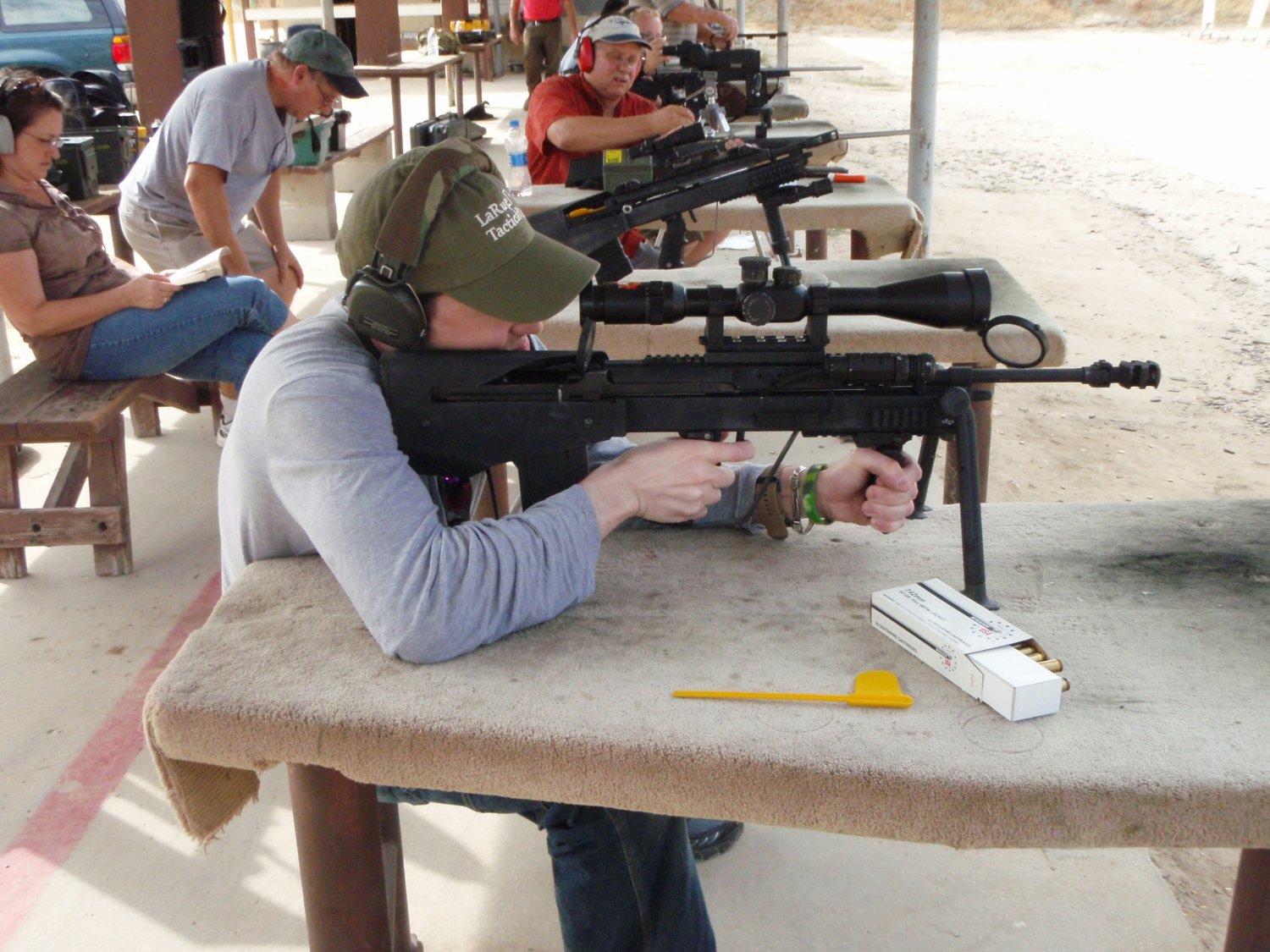 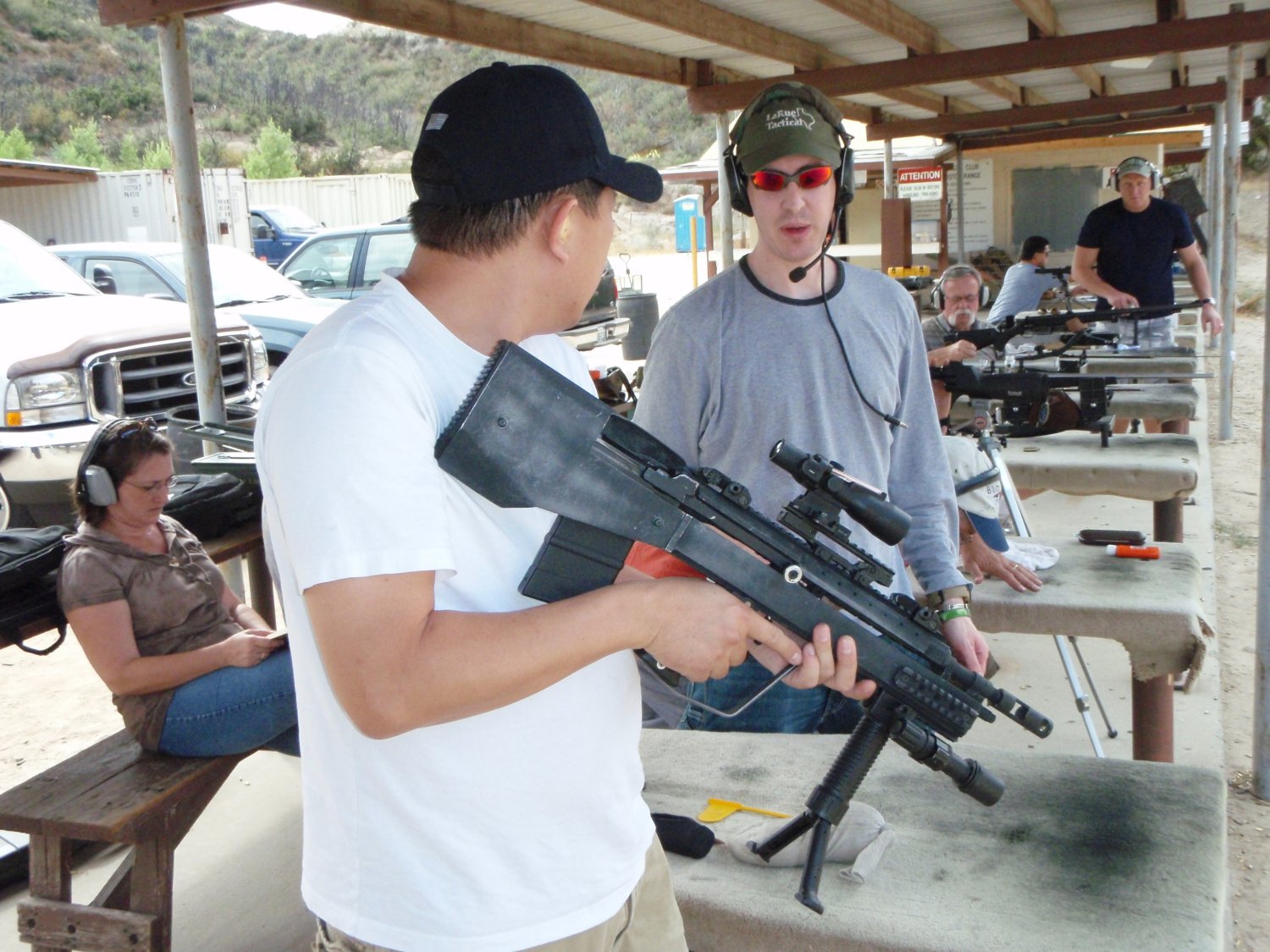 David Crane started publishing online in 2001. Since that time, governments, military organizations, Special Operators (i.e. professional trigger pullers), agencies, and civilian tactical shooters the world over have come to depend on Defense Review as the authoritative source of news and information on "the latest and greatest" in the field of military defense and tactical technology and hardware, including tactical firearms, ammunition, equipment, gear, and training.
Previous Adams Arms Retrofit Gas Piston System (RGPS) for Tactical AR-15 Carbines
Next JAE-100 GEN 2 Precision Rifle Stock for Tactical M14/M1A Rifle/Carbines