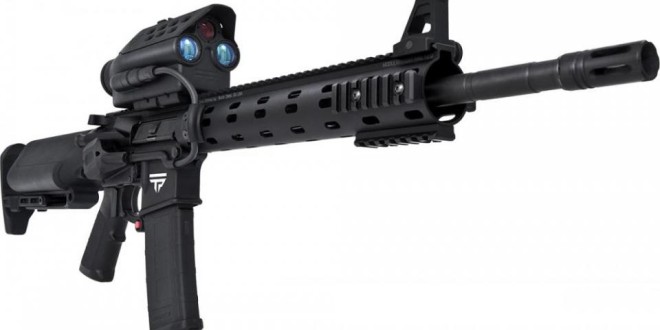 Looks like the Land Warrior / Future Force Warrior (FFW)-type shoot-around-corners capability has just become a practical reality. Glenn Beck’s The Blaze recently published a piece on the rather interesting ShotView made by the guys at TrackingPoint, which uses a Google Glass HUD (Heads Up Display) eyewear system wirelessly connected to a TrackingPoint TP AR PGF (Precision Guided Firearm) electronic weapon sight/camera to give a shooter/operator the ability to accurately aim his/her weapon and engange an enemy target from behind cover, without even having to get behind the weapon, let alone achieving a proper cheek weld, essentially freeing the shooter from having to slave his face (and eye) to the gun.

With TrackingPoint TP ShotView, the shooter can aim the weapon from unsupported positions, without having to concern himself/herself with proper shooting technique. If it works as advertised, it’s essentially the shooting/weapons aspect of Land Warrior and Objective Force Warrior (OFW)/Future Force Warrior (FFW) realized, all with the help of Google, no less.

And that, of course, isn’t all. As with previous TrackingPoint PGF systems, you can wirelessly stream, record and network the info from the TrackingPoint ShotView weapon sight.

Hopefully, the target=right>TrackingPoint ShotView system will be available to civilian tactical shooters (who can afford it), at some point, even though the company has apparently told the Huffington Post, of all publications, that it has no immediate plans to make the Google Glass app available to civilian consumers. DefenseReview (DR) is sure that at least made the folks at HuffPo happy.

Defense Review has written pretty extensively about the TrackingPoint PGF tech, including the TP AR platform weapon systems being used for TP ShotView, and we’ve also shot some of our own video on the tech at SHOT Show, so please check out those articles in the “Relevant Articles” section below–but watch the video below, first.

© Copyright 2014 DefenseReview.com. All rights reserved. This material may not be published, broadcast, rewritten or redistributed without receiving permission and providing proper credit and appropriate links.
Relevant Articles:

David Crane started publishing online in 2001. Since that time, governments, military organizations, Special Operators (i.e. professional trigger pullers), agencies, and civilian tactical shooters the world over have come to depend on Defense Review as the authoritative source of news and information on "the latest and greatest" in the field of military defense and tactical technology and hardware, including tactical firearms, ammunition, equipment, gear, and training.
Previous 70th Anniversary of World War II (WWII) D-Day Invasion: A Great Big Thank You from DefenseReview (DR)!
Next Heckler & Koch HK VP9 Striker-Fired, Polymer-Framed 9mm Combat/Tactical Pistol with Ambi Controls: Better Late than Never…But is it Better than the Glock 17/19 and Smith & Wesson M&P9 Series Pistols? It may be, but we’ll just have to see. (Video!)