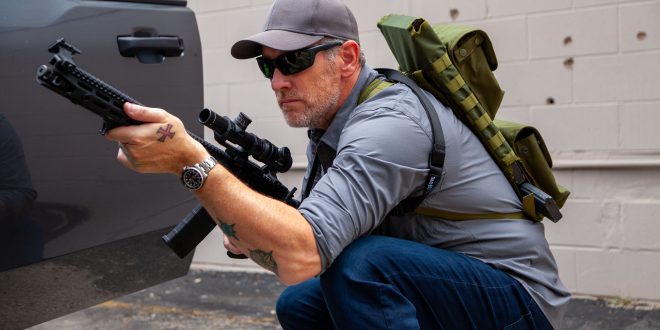 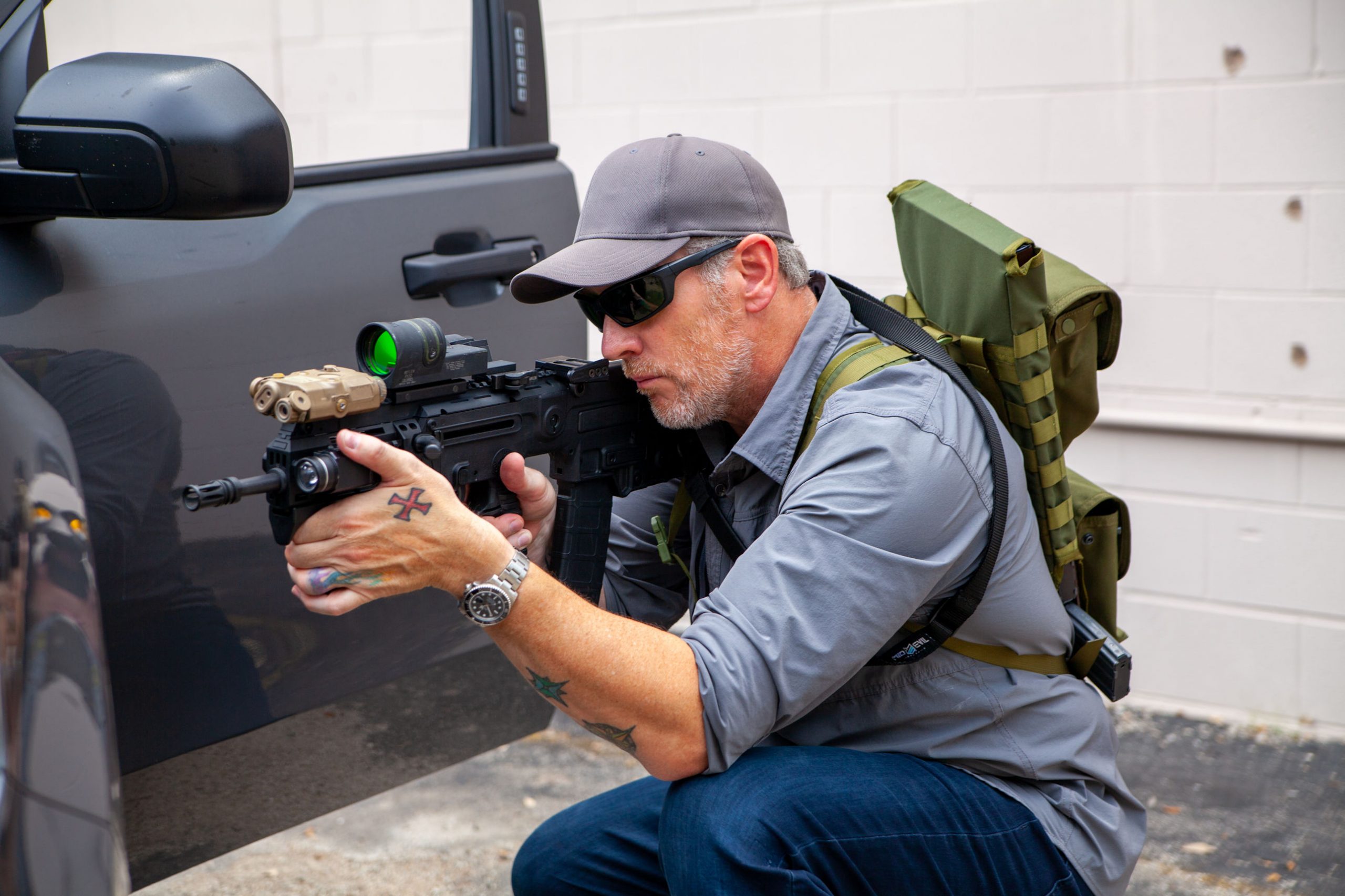 The necessity to carry ammunition for your firearm is an essential requirement. An individual must be able to feed the weapon they fight with, or find themselves depleted of ammunition quickly. The other side of this issue is space. There’s only so much room on your kit. Early examples in the War on Terror were soldiers carrying vast amounts of ammunition on the front of their kit, making it heavy and difficult to move. The problem here becomes two-fold: having enough ammunition to support the firearm and its intended use, AND ensuring a practical way of carrying it. 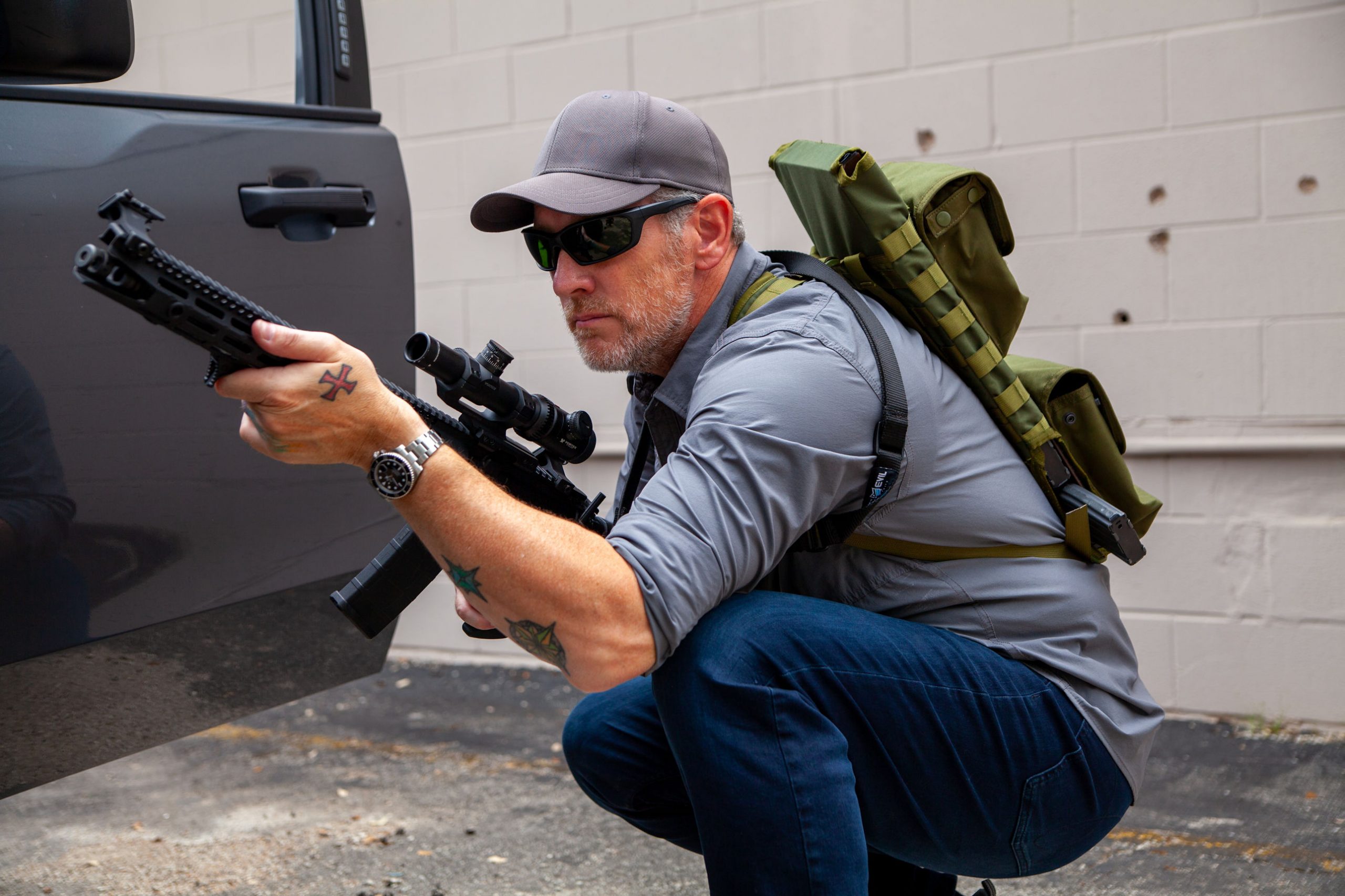 Until recently, the ability to find a realistic way to carry ammunition while ensuring functional wear of equipment was a personal battle of blending form and function. Naturally, individuals start to assess locations where ammunition can be stored and quickly accessed. The ideas and applications have been exhaustively explored. Until recently, only science fiction and fantasy have been able to showcase the application of instant access to back-mounted ammunition systems. Much like the ability to simply “holster” or retain your weapon on your back instantly has been a product of video games and motion pictures. The application is simple in concept and yet nearly impossible to accomplish (see the Rapid Retention System). However, Cameron Shiell of AmmoBack (also written Ammo Back) had an idea; this idea was not only functional but had been accomplished in the most inconspicuous of designs, the Pez Dispenser. 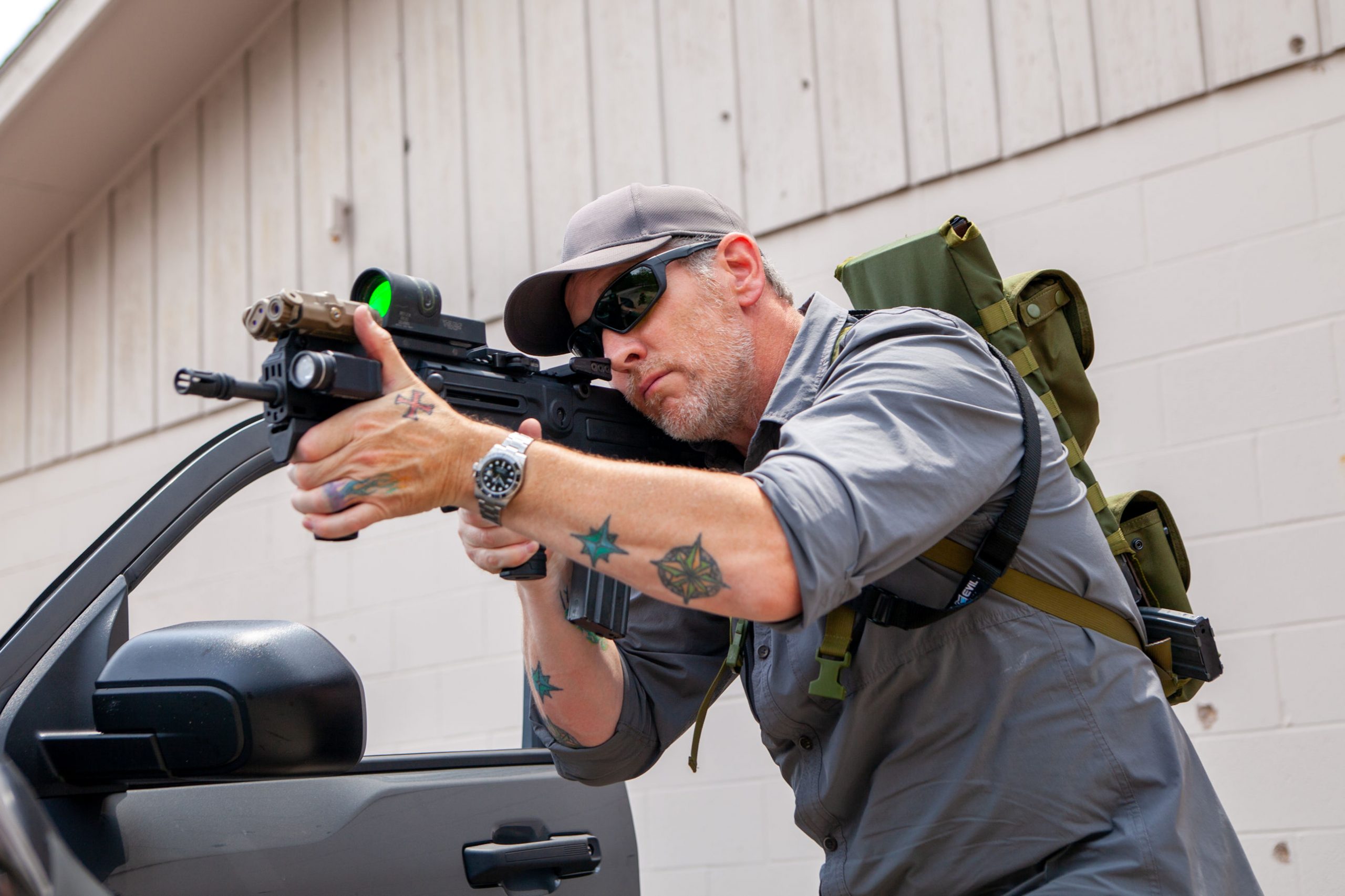 The Pez Dispenser is a spring-loaded automatic dispenser of little candies that, upon desire, is manually opened, and a single piece of candy is pushed up and forced slightly forward for easy access. This concept was applied by Ammoback to 5.56mm NATO (5.56x45mm NATO) US AR-15/M16/M4/M4A1 mags (magazines). The result is a Pez Dispenser-like device of hate and malcontent! The AmmoBack is a back-mounted system that allows for the safe and effective storage of AR-15 magazines. It’s spring-loaded to force the last stored magazine down and slightly out of the opening, giving the user instant access to the magazine without the fear of it falling out of the carrier. The magazine is secure-but-accessible and easy to acquire when needed. The user can reach behind their lower back and pull the magazine out. Upon doing so, the next magazine in the stack is forced down and slightly outward, allowing the user to grab the next magazine when needed. 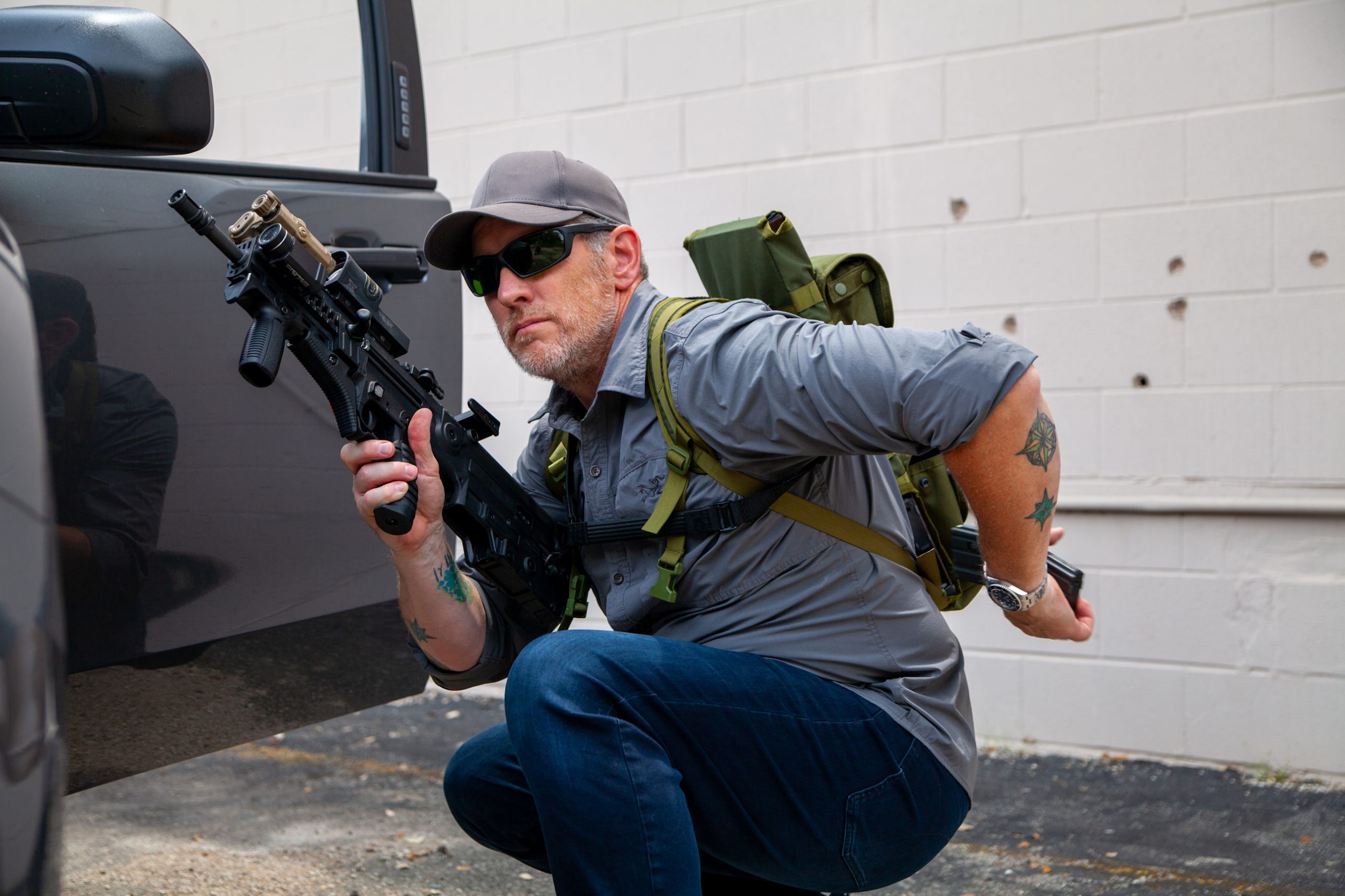 This sounds more complicated than it is. The Ammo Back is quite intuitive, and natural and instinctive in application. When needing to reload, the individual simply reaches behind their lower back where the magazine sits ready. You pull the magazine and load it. When you remove the magazine, a fresh magazine is pushed into position and is locked in place until needed. The system currently offers two back-mounted 5.56 magazine configurations, and a pistol configuration available on request. The primary and original version holds six AR-15 magazines, and can be worn as a stand-alone backpack or MOLLE-mounted. The newer variant contains four AR-15 magazines and is specifically MOLLE-mounted; this design is intended to mount to a plate carrier. The more recent design also has a specialized cover to protect the magazine in case of falls or other rough environmental interactions. It also keeps debris from entering the Ammo Back system. Both variants are reversible for right and left-handed use and can be removed from the carrier to ensure maintenance and repair. 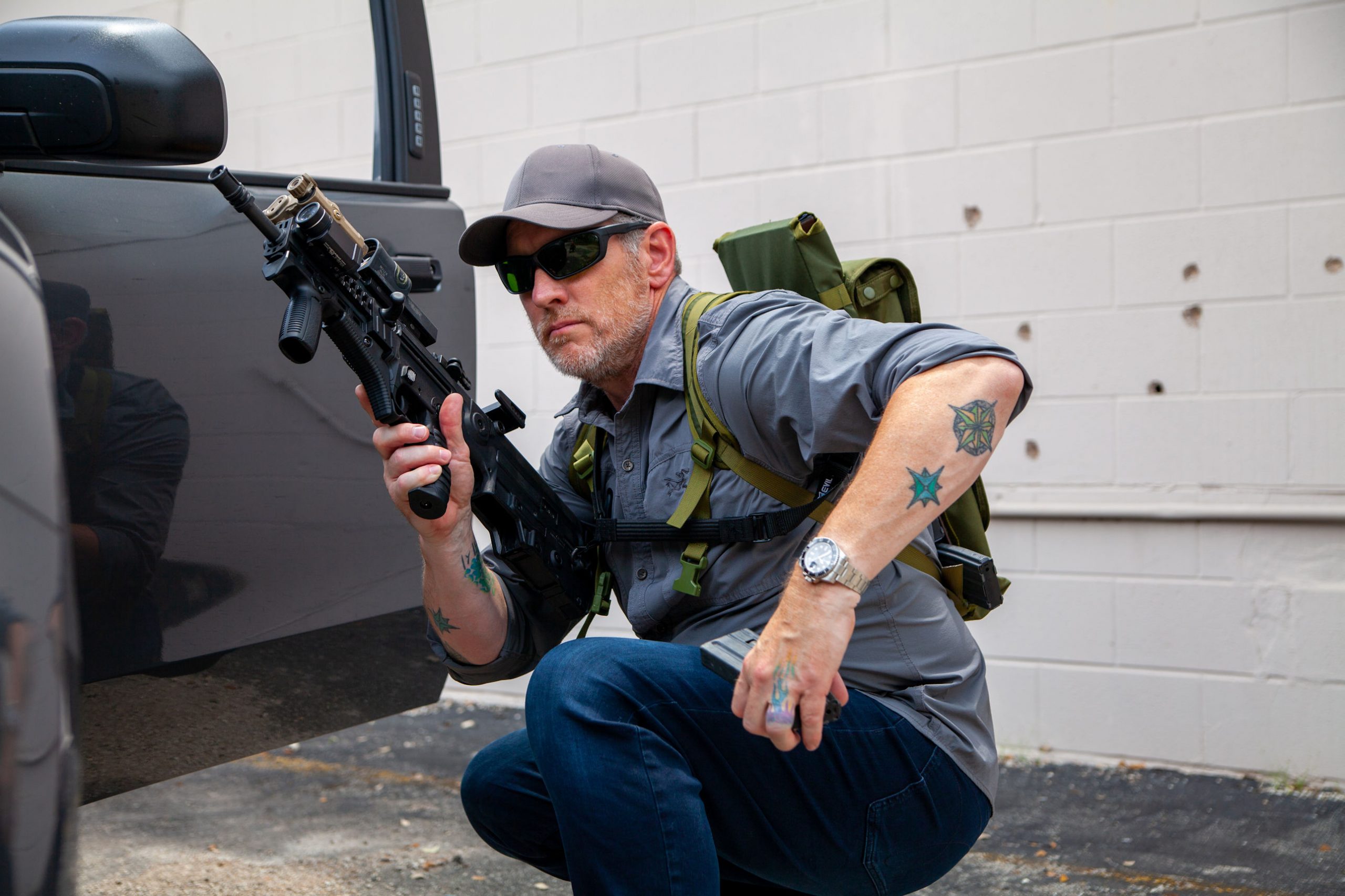 Now that we have discussed an issue with magazine storage and the featured product, why is the AmmoBack relevant? The AmmoBack system is not a product creating a case to solve, but instead is solving an existing issue and allowing for greater mobility despite having ready access to magazines. The system is not only helpful, but also practical and easily applied. The AmmoBack significantly increases access to loaded magazines without taking up valuable real estate on the front of your kit. It minimizes bulk, making it less challenging to get into prone positions, shoot from cover, or interact with your environment. Anyone who has operated with a bulky loadout on the front of their carrier understands how this can quickly make movement and function complex. 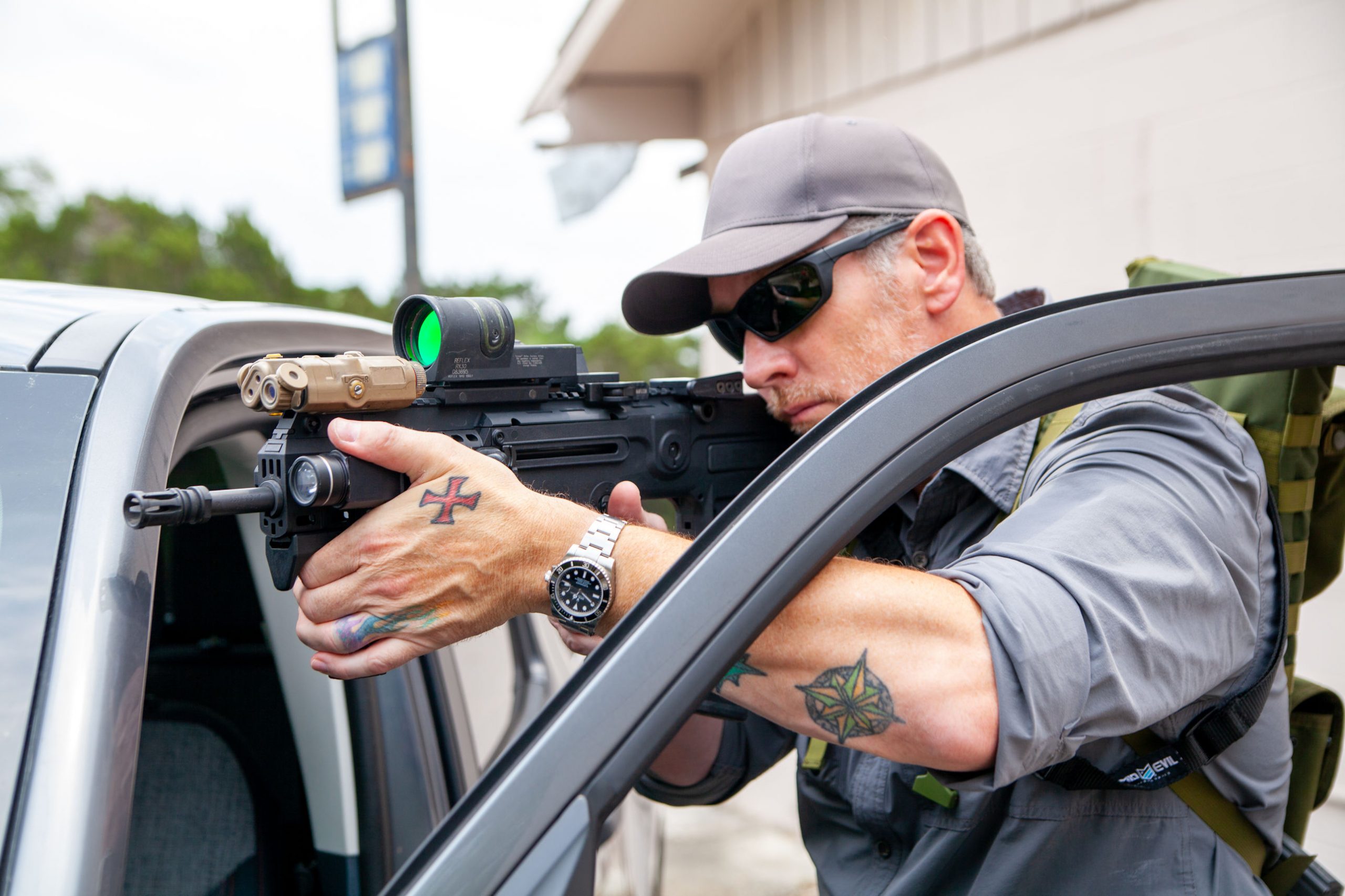 Another option for the AmmoBack is using the six-magazine carrier as a Go Bag. The integrated shoulder straps provide a stand-alone use that removes the necessity for a carrier or vest for mounting. Furthermore, the MOLLE system facilitates adding pouches for other equipment needed for a functional Go Bag. As a caveat, I would point out that any low profile Go Bag should not be riddled with MOLLE, and should provide a civilian, non-tactical appearance. The Ammo Back dispenses rifle magazines, so the grey man approach may not be your best application if running this system exposed outside of a civilian backpack like a Jansport. A positive is the system is back-mounted. So, it may not generate too much attention from onlookers not specifically noticing the protruding magazine if the cover is not in place. If you have your rifle out already, the issues of remaining inconspicuous are already lost. So, the Ammo Back will be a significant asset in readily accessible magazines. 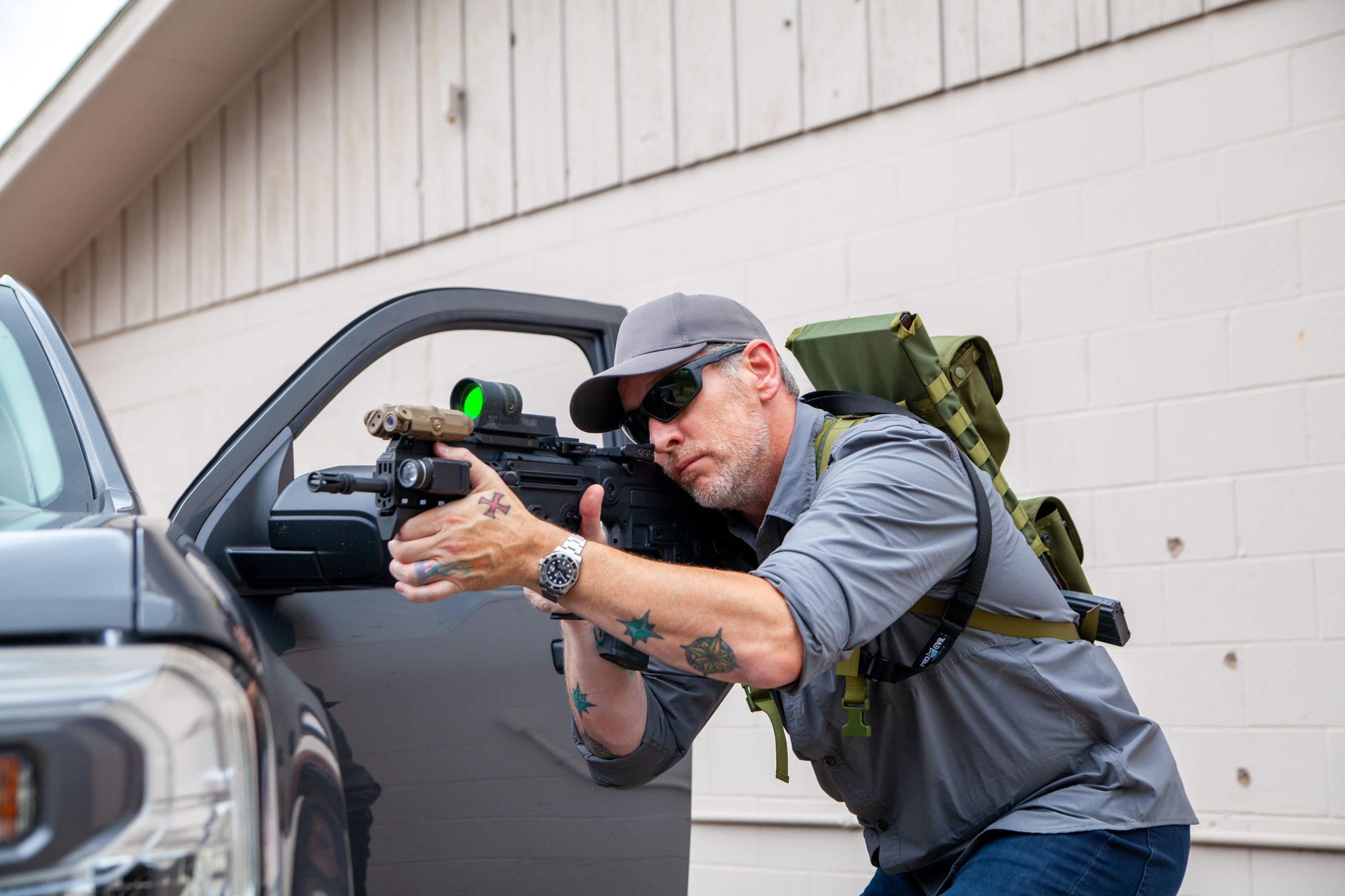 Another plus is the size. The AmmoBack is only as wide as the length of the magazine; this equates to a narrow backpack and regulates how much gear can be attached; the system can also be stacked, doubling capacity. I am a proponent of not overpacking a Go Bag; it defeats the purpose. If an individual needs more, you are pushing into a Blow-Out or Bail Out Bag; this may be a matter of semantics, but I feel it is a crucial point to be made. The same can be said for the four-mag system. The four-magazine AmmoBack, or AmmoBack Micro, allows four magazines to be conveniently stored on the back. Even in the prone, the magazines are easily accessed and do not interfere with any movement. 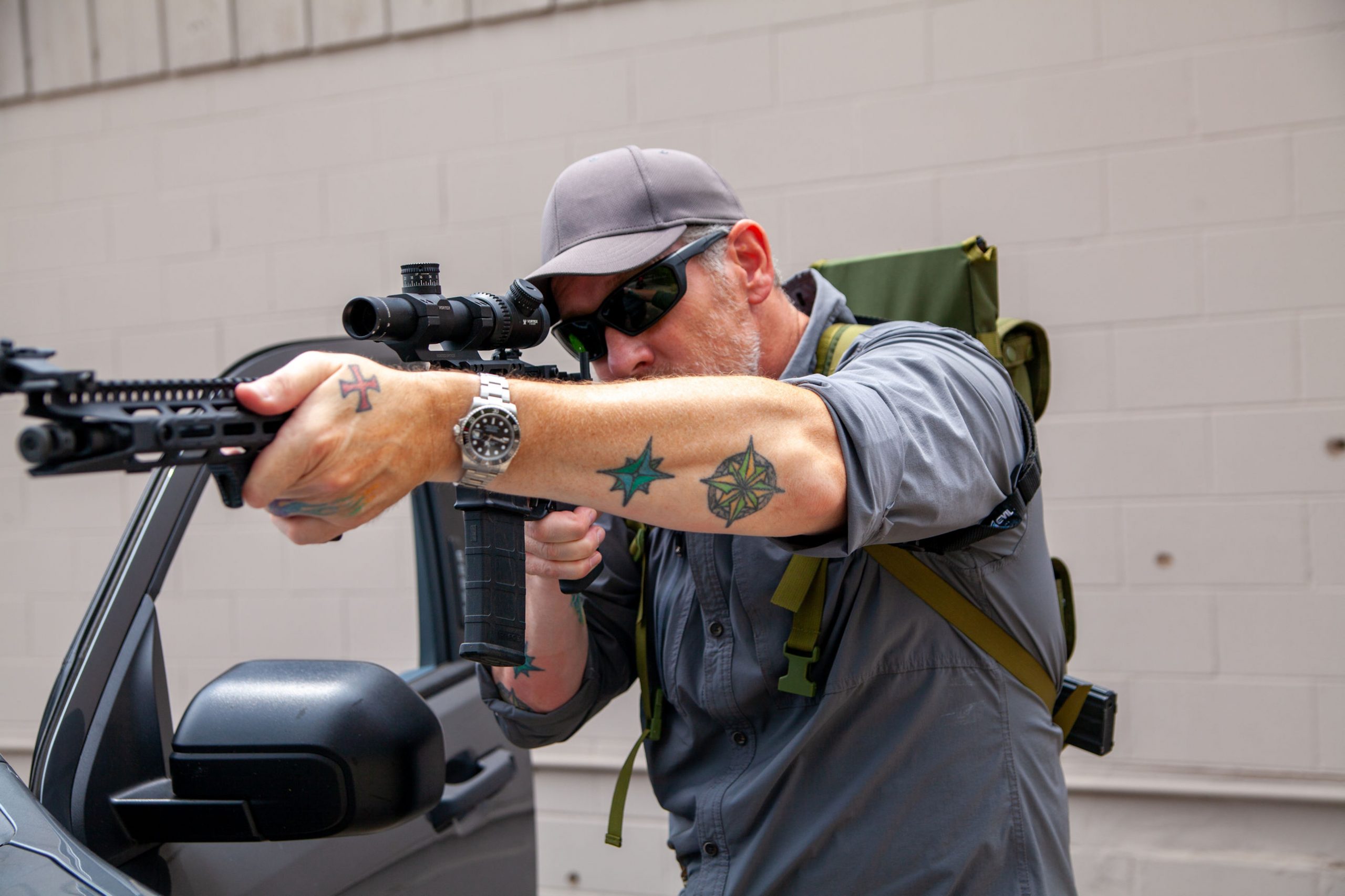 Another point is the system’s rigidity for carriers in mounting hydration bladders, radios, antennas, breaching tools, or other back-mounted team support pouches. Often, plate carriers have loose-fitted material on the primary pocket of the carrier, and are inconvenient for material movement. With the AmmoBack, the magazines are flat against the back widthwise, so the bulk is minimal and will not even be noticed. Still, the extra four magazines will be greatly appreciated when engaging enemies or targets. The system is extremely rugged and durable. I witnessed the inventor, Cameron Shiell, jumping on the platform with full body weight. There was no damage to the system, and the inspection found that the forced impact did not impede the operation. 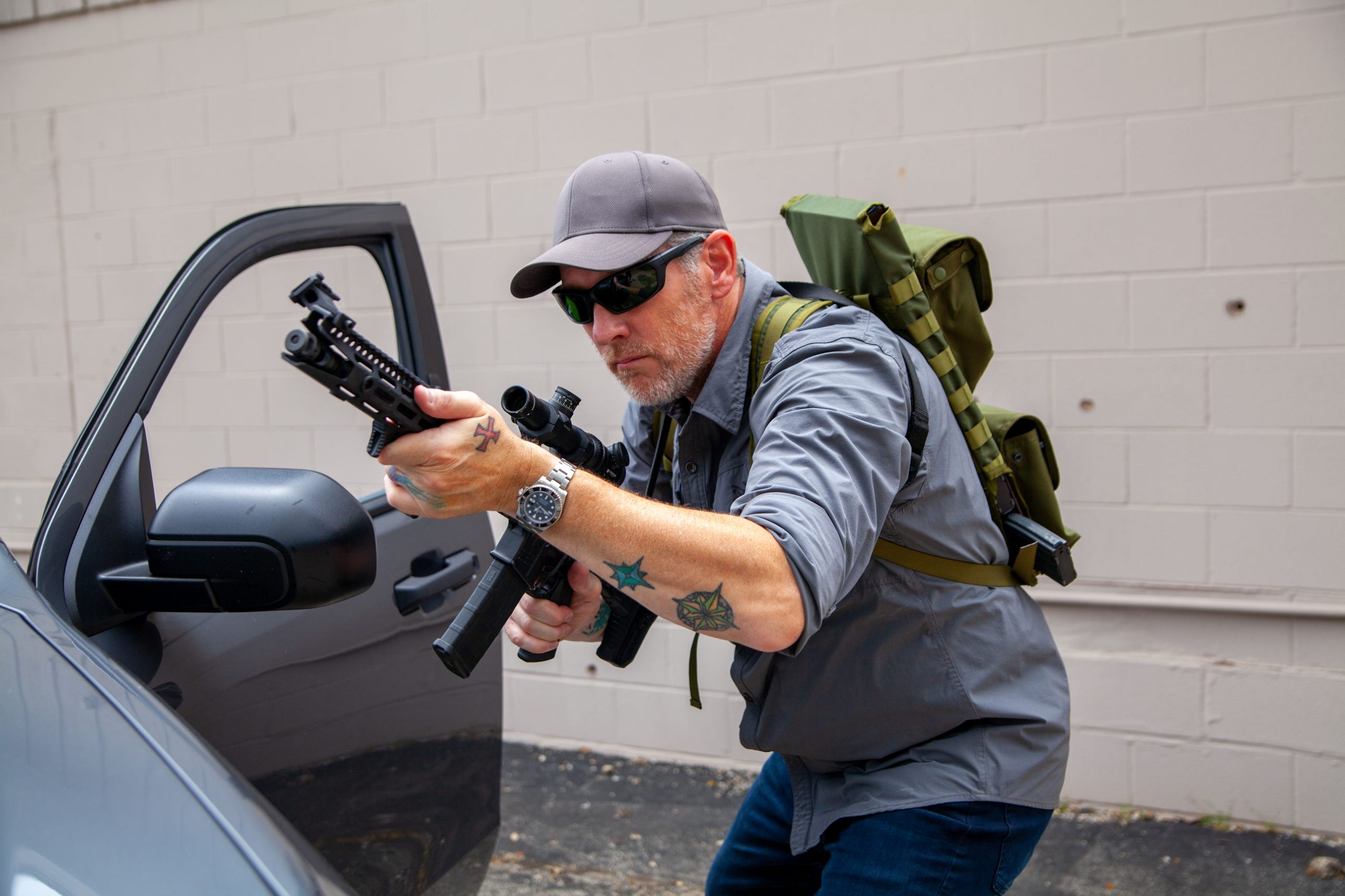 The AmmoBack is not without a few drawbacks, however. The most significant one is that some magazines will not function in the system. I have confirmed with Mr. Shiell that generation 1 PMags will not fit into the system. There may be a little trial and error with the variety of AR-15 magazines, but magazine bases larger than a Gen 3 PMag or the rubber covers/bases will have fitting issues, and most likely will not function in the system. With so many types and styles, some trial and error may be necessary. STANAG magazines work flawlessly, and given their abundance, are an easy issue to overcome. 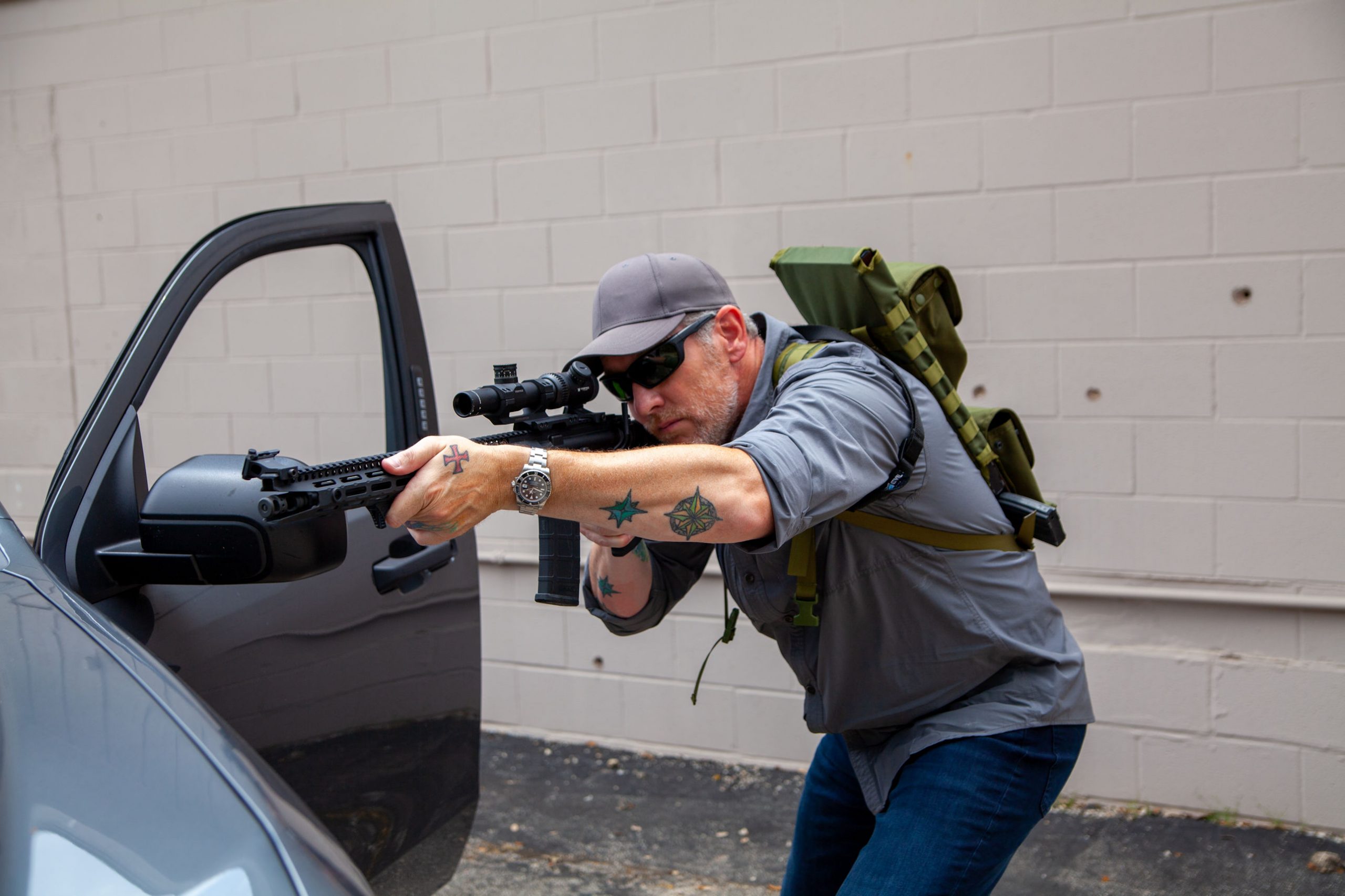 Another point, though not one of significance, is the manual of arms. The ability to reach behind yourself is natural, so acquiring a magazine is also easy, and teaching yourself this technique requires minimal effort. Another point of contention is the diversity of another platform’s compatibility. Currently, only AR-15 and pistol mags (9mm, .40, and .45) are will work, but SR-25-styled mags are in testing, and may soon be released. I inquired about the prolific and beloved AK (Kalashnikov AK-47/AKM) rifle platform, but the locking lugs of the magazine have created serious issues. Finally, the carrying cases for the system could be expanded from the overt MOLLE style carriers to more civilian and “grey” options that can double for weapon storage. Mr. Shiell has expressed this is a subject they have already begun to work on and should easily have options. Regardless, the ability to readily alter a personal backpack is easily accomplished by oneself, or with the help of a professional sewer. 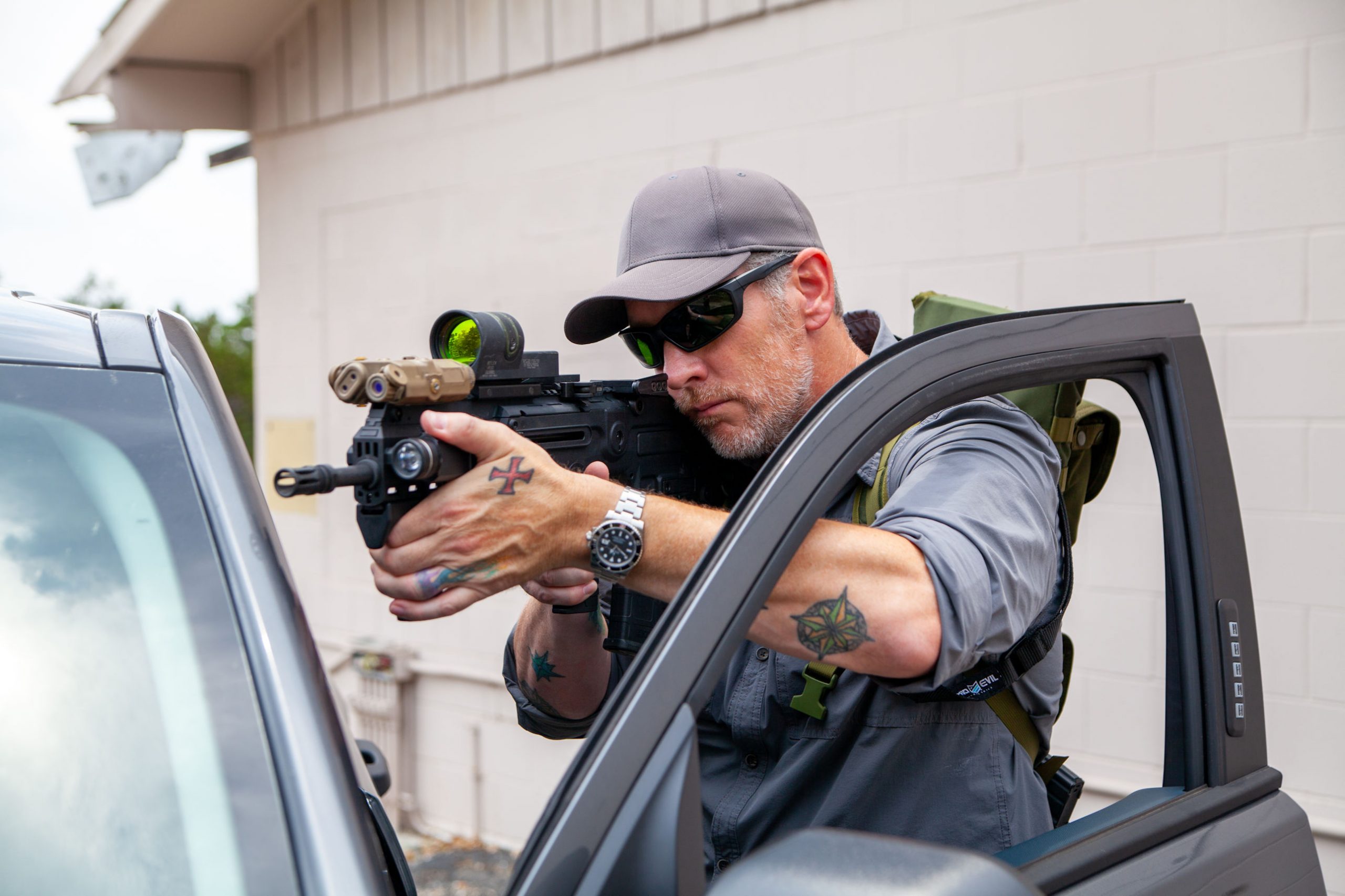 Some final thoughts on the AmmoBack system: It’s essential to consider this as part of a total system approach, and not just a single piece of kit. The AmmoBack can come across as gimmicky or unrealistic. Still, I would argue it is, in fact, a viable piece of kit that can provide options to enhance survivability and improve the odds of mission success. The system is limited in platform options, but the AR-15 and AR-15 magazine-compatible platforms are easily 3/4ths of the US market, providing virtually any 5.56 user with an excellent piece of kit. It makes use of a semi-useless portion of real estate on your gear. Finally, it can be applied to other parts of gear/equipment, and is only limited to your imagination in its application. The Ammo Back is a revolutionary and dependable product that will significantly enhance any AR-15 magazine-based shooter’s needs for readily available magazines during a fight. The AmmoBack is thus an excellent option for those looking to improve their tactical toolbox potential and increase survivability in hostile environments.

© Copyright 2022 DefenseReview.com (DR) and Toby Melville. All rights reserved. This material may not be published, broadcast, rewritten or redistributed without receiving permission and providing proper credit and appropriate links. If you are reading this article anywhere other than DefenseReview.com, please email us the website address/URL (where the unauthorized DR article reprint is located) at defrev (at) gmail (dot) com. Thank you.

David Crane started publishing online in 2001. Since that time, governments, military organizations, Special Operators (i.e. professional trigger pullers), agencies, and civilian tactical shooters the world over have come to depend on Defense Review as the authoritative source of news and information on "the latest and greatest" in the field of military defense and tactical technology and hardware, including tactical firearms, ammunition, equipment, gear, and training.
Previous Wilson Combat SFT9 Solid-Body-Aluminum-Frame High-Capacity 9mm Combat/Tactical 1911 Commander Pistol for Concealed Carry (CCW) and Home Defense!
Next B&T KH9 Covert FDE 9mm Semi-Auto Folding Combat/Tactical Pistol with Telescoping Arm Brace: 30 Rounds of Cool Factor for Clandestine Operations, Home Defense and Plinking at the Range!