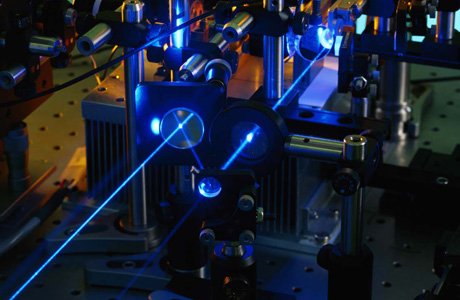 Back in November (2013), DefenseReview (DR) published a short piece on the U.S. Air Force’s search for an air-to-air laser weapon system and the solicitation that was issued for “Laser Systems for Future Air Dominance Platforms“. Translation: The USAF wants a laser weapon system they can stick on fighter aircraft to augment and perhaps even replace air-to-air missiles.

Well, Lockheed Martin’s has answered the call with a 30-kilowatt electric fiber laser system that utilizes a process called spectral beam combining, where multiple laser beams are combined into one big powerful beam for maximum power. Eventually, an SBC laser could be mounted on fighter aircraft, other aircraft, tanks, ships, trucks, you name it. Now, everyone thought that missiles would replace guns, only to find out that pilots sitll wanted and needed guns for close-in dogfights, especially when your missiles don’t work. So, it’s more likely that a laser weapon system would augment current missiles and guns on aircraft, rather than totally replace them, provided the laser system doesn’t add too much weight and can be adequately ruggedized. Supposedly, the SBC technology overcomes the weight and power problems and cooling requirements of previous designs.

Obviously, a laser weapon system of this type can be potentially used both offensively and defensively by fighter aicraft, particularly if it’s omiirectional and can be used to engage aircraft and missiles behind it. Defense Review is curious as to Lockheed Martin’s ultimate engagement range envelope goals and projected capabilities. DR has just been informed that Lockheed Martin Aculight is involved in this project/program.

Interestingly, as it turns out the Lockheed Martin’s SBC laser system project is being funded by the U.S. Army, not the Air Force, and Boeing’s also reportedly received funding.

© Copyright 2014 DefenseReview.com. All rights reserved. This content/material may not be republished, broadcast, rewritten or redistributed without first receiving permission and providing proper credit and appropriate links.