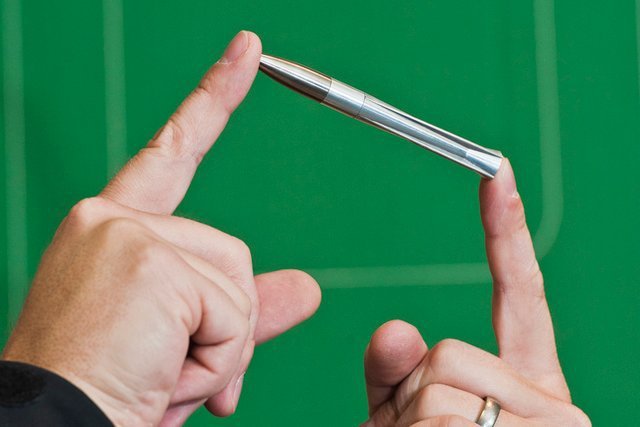 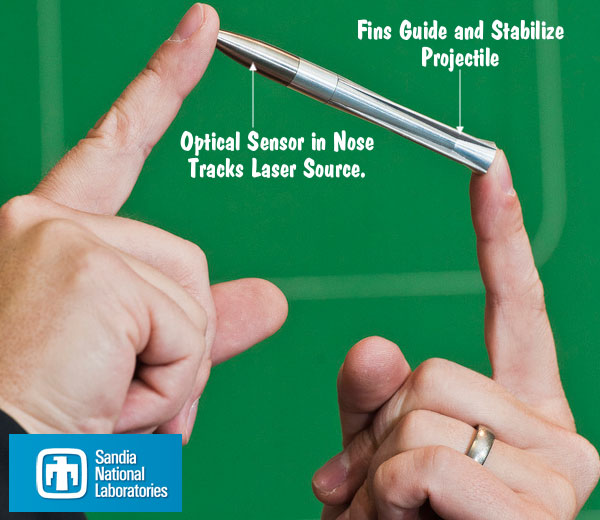 Sandia labs is currently in the process of developing a “self-guided” bullet, specifically a laser-guided .50-Caliber round, that Gene Simmon’s character “Luther” in the movie Runaway would REALLY like. And who could blame him? The projectile is a saboted round that guides itself by optical sensor in the nose that tracks a laser designator, and utilizes fins to make course corrections and stabilize itself. And the kicker is it can do this out of a smooth bore, so no need for barrel rifling! The claimed effective range is approximately 2,000 meters, or more than a mile.

God only knows how much this little .50-Cal. guided projectile’s gonna’ cost, but logic would dictate that it has be significantly more expensive than a conventional .50 BMG round, even the Raufoss Mk-211 armor-piercing/incendiary round.

But the future costs, and the future looks pretty damn exciting according to Sandia researcher Red Jones, who’s also one of the researchers who helped develop the laser-guided .50-caliber bullet. “In the laboratory, I’m able to make machines so incredibly small it kind of boggles my mind,” said Jones. “Where we’re headed, we’re going to be limited only by our imagination,” he adds.

The end game is to load smooth-bore semi-auto rifles and even a smooth-bore version of the U.S. Ordnance M2HB-QCB (Quick Change Barrel) “Ma Deuce” .50 BMG heavy machine gun (HMG) up with the new precision-guided wonder rounds, and start raining relentless .50-caliber pain down on them at long with peerless and profound precision, using the minimum number of rounds required to neutralize the target. The M2HB is accurate enough and has a slow enough cyclic rate of fire that you can use it to hit long-range targets effectively with a single conventional .50 BMG round– but you need to know what you’re doing. But, sometimes you need multiple rounds to neutralize the target. A laser-guided round that works reliablybremoves the skill requirement, and would make hitting moving long-range targets a breeze.

The only cost-saving aspect to a self-guiding precision .50-caliber round is its one-shot/one-kill aspect, though. The question is, how many conventional .50 BMG rounds does it take to neutralize the target versus that one laser-guided round, and what’s the cost comparison for that kill? Understand that there are now advanced combat optics and laser aimers (aiming lasers) for light, medium and heavy machine guns that allow a soldier to dial in rounds on the target very quickly if he/she isn’t able to hit the target with the first shot. Back in July (2011), DefenseReview (DR) got to run the U.S. Ordnance M2HB-QCB with a Raytheon Elcan SpectrHR wide-view dual red dot combat optic (optical gunsight) mounted on it at the company’s test range, and the combo worked well.

Of course, the Sandia Labs guided-round’s combat viability is predicated on it actually working as advertised, and working reliably, ideally every single time its fired.