All photos contained in this article were taken by, and are the exclusive property of, DefenseReview.com.

Back in July 2004, DefenseReview published an article on the TASER X26 less-lethal/non-lethal weapon system, which uses Shaped Pulse™ Technology to disrupt the human body’s electrical impulses, making it (according to the company) physically impossible for an individual to continue an attack, even while that individual is under the influence of performance-enhancing drugs. The TASER X26 is 60% smaller and lighter than the Advanced TASER M26, yet it still packs even more punch (i.e. non-lethal/less-lethal stopping power).
Well, TASER International, Inc. has come out with an interesting new audio/video modular accessory product for the X26 that gives the system enhanced utility. It’s called the Video Digital Power Magazine (VDPM), and it’s an audio/video recording system that gives the operator the ability to… 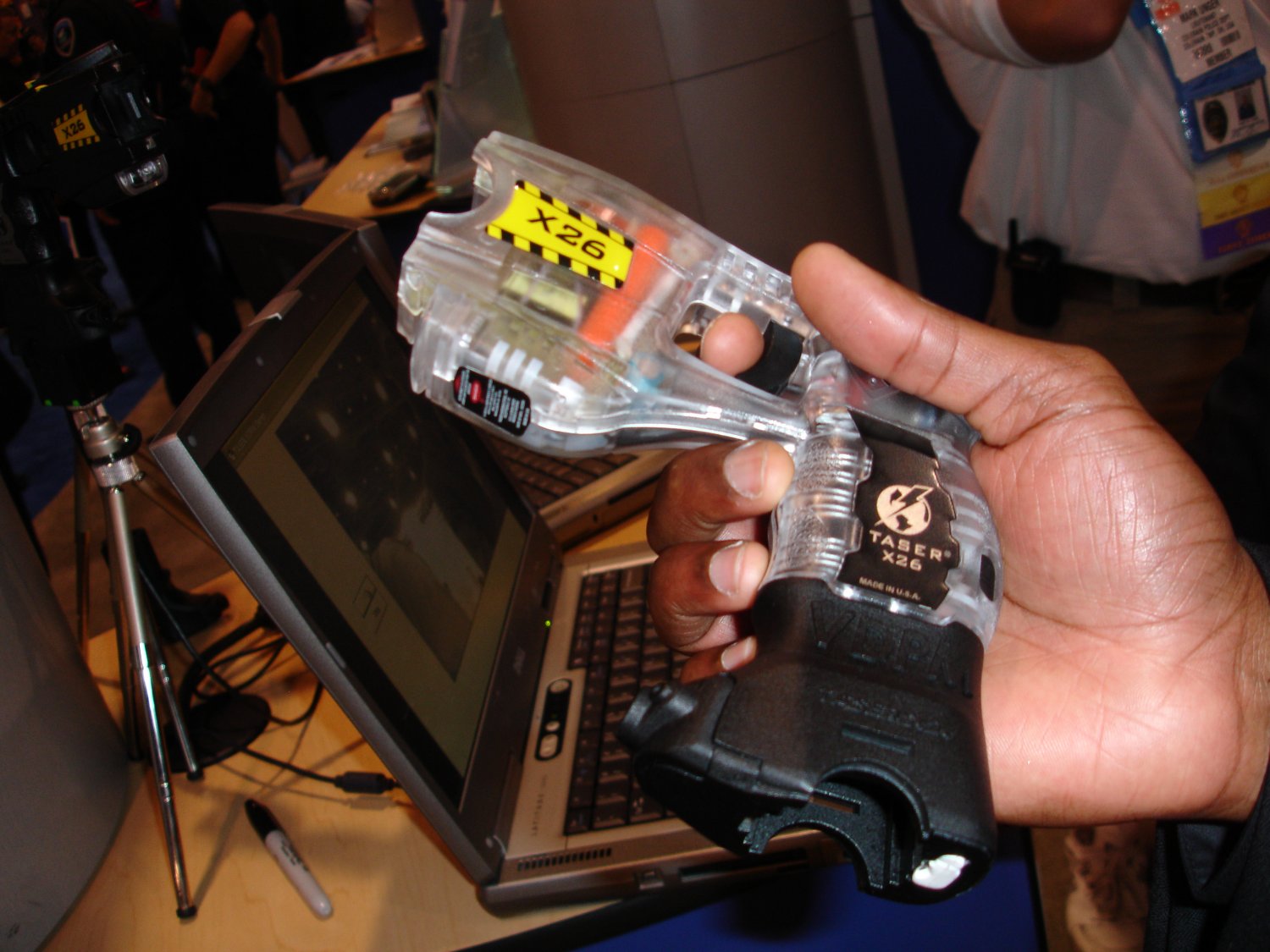 record audio and video of use-of-force incidents where the X26 is employed/deployed. Specifically, it allows the operator to capture vital audio and video footage prior to, during, and after the deployment of the X26. This enhanced capability is particularly important for law enforcement professionals, since use-of-force incidents are now analyzed and reviewed so thoroughly, and legal liability in any violent encounter where officers are involved is a major organizational concern. Obviously, any tool that can mitigate the legal and financial risks associated with these encounters is going to be very useful to any law enforcement or government agency. This risk/liability-mitigation aspect is one of the advantages of the new breed of flashlight-format tactical audio/video recording and broadcast systems that are currently making some headway in law enforcement circles. Two primary examples of this new and developing technology are MII-Flashcam and CamLite.

TASER International refers to the VDPM as an "intelligent module", which integrates with the TASER X26’s Digital Power Magazine, or "DPM" (the weapon’s power supply). Once the audio/video data is recorded by the VDPM, it can then be downloaded to any Windows PC-compatible system via the X26 USB Dataport Interface. Defense Review doesn’t yet know if the VDPM can interface with Apple Mac systems, but we’ll try to find out ASAP. The VDPM also contains a storage bay for a spare cartridge and utilizes a rechargeable power source. 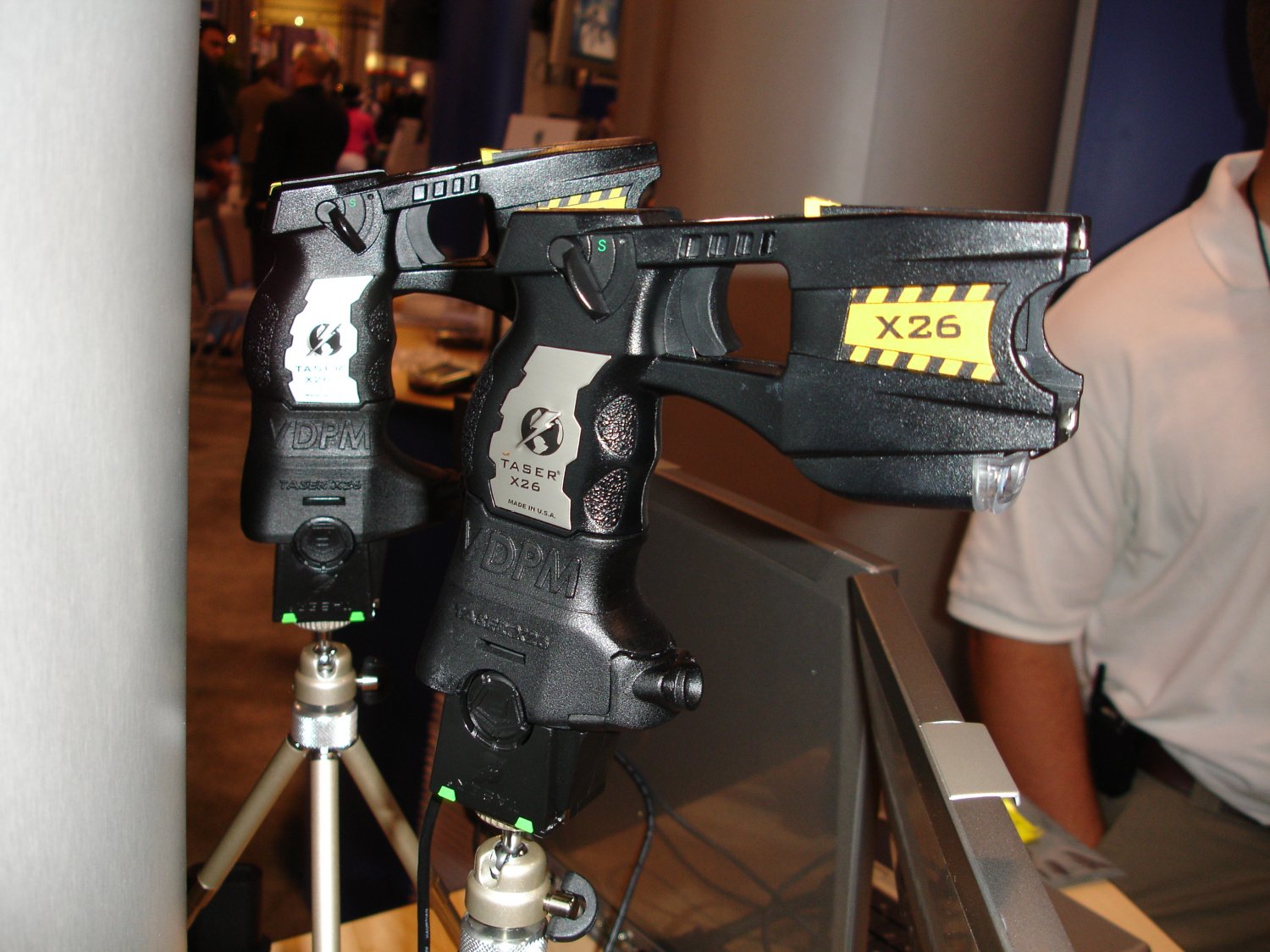 DefenseReview got a chance to view, handle, and photograph the VDPM at IACP Miami 2005, but we didn’t have time to get a demonstration of the device. Hopefully, we’ll get the opportunity to T&E a sample device, soon.
If you’d like to learn more about the TASER X26 Video Digital Power Magazine (VDPM), you can contact TASER International, Inc. by phone at 480-905-2000, or toll-free at 800-978-2737.
International callers can contact them by phone at 480-991-0797. You can fax TASER at 480-991-0791.
Click here to read DefRev’s original article on the TASER X26, titled TASER X26 Less-Lethal Weapon for Police/LE 1st Responders
Click on this link to visit the official Taser X26 website.
The following is a portion (excerpted) of the original TASER International, Inc. press release on the VDPM:
"TASER® International, Inc. Video Digital Power Magazine (VDPM)
TASER(R) International Previews Audio – Video Recording System for TASER X26 at IACP Conference
Video Digital Power Magazine (VDPM(TM)) Leverages Modular Design of the TASER X26 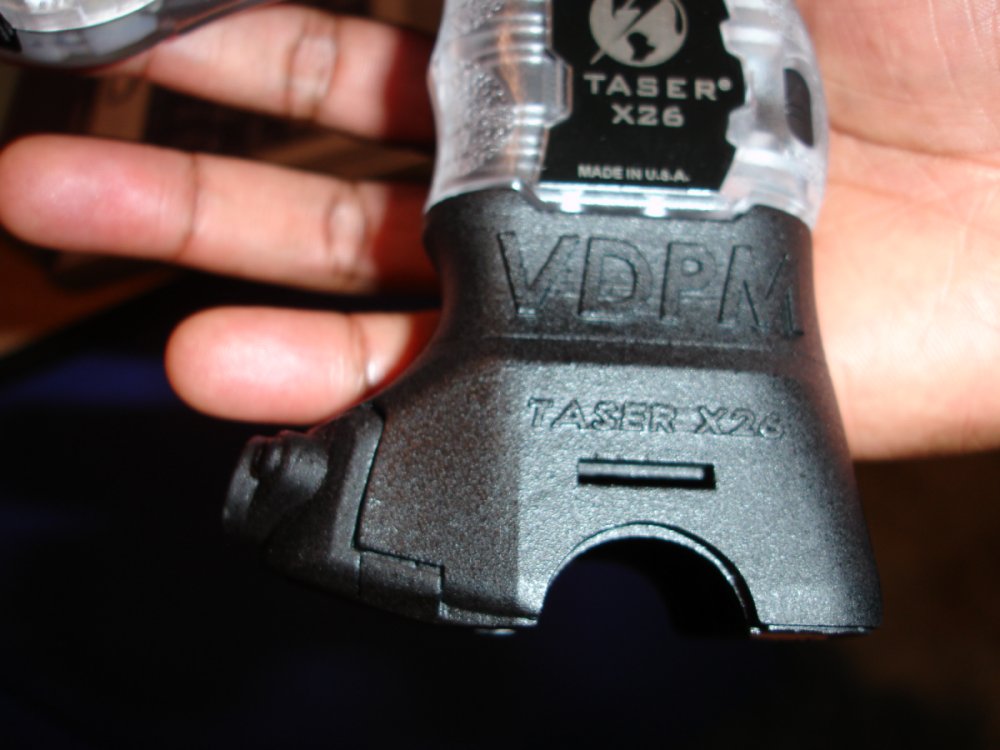 SCOTTSDALE, Ariz., Nov 18, 2004 (PRNewswire-FirstCall via COMTEX) — TASER International, Inc. , a market leader in advanced non-lethal devices, announced the pending release of an audio-video recording system for the TASER X26 conducted energy weapon. The Video Digital Power Magazine, (VDPM) was unveiled at the International Association of Chiefs of Police (IACP) conference held in Los Angeles earlier this week and is currently scheduled for shipments in the first half of 2005.
"We are excited to announce this powerful new capability being developed for the TASER X26," said Rick Smith, CEO of TASER International, Inc. "The ability to capture both audio and video records of force incidents involving TASER X26 usage is the next generation extension of our proprietary data port technology. As a market driven company, the concept of an integrated audio-video capture capability was explored with customers at our annual TASER Tactical Conferences dating back to 2000. In April 2002, we submitted a proposal to the National Institute of Justice to obtain government funding to develop this capability. Although the governmental funding was not achieved, we continued to move toward implementation of audio video capture capabilities with our internal research and development resources. As part of this program, the TASER X26 was designed to incorporate the digital communications capability necessary to allow for future expansion via intelligent modules, such as the new VDPM. Recent advances in audio video compression technology will make the VDPM a cost effective, powerful extension to the TASER X26 capability set," stated Mr. Smith.
The VDPM is an audio-video capture device integrated into the TASER X26 power supply, also referred to as the Digital Power Magazine (DPM). In addition to the audio-video recording capability, the VDPM contains a storage bay for a spare cartridge and utilizes a rechargeable power source — a first for the TASER X26. The recharging stand and software will serve as a USB compatible download interface to Windows(R) PC compatible systems. It is anticipated that the VDPM will be compatible with the fast-growing installed base of currently fielded TASER X26 units.
"The VDPM is one more feature of the TASER X26 that allows officers to capture vital information prior to, during and after the deployment of non-lethal force. Further, the modular nature of the VDPM not only allows users to upgrade to this capability in the field, but it allows TASER International to provide additional value-add capabilities to our existing TASER X26 user base," added Mr. Smith. "We are constantly striving to provide the law enforcement community with the best tools that technology can provide. We feel the VDPM is reflective of that commitment," concluded Mr. Smith.
The prototype VDPM design is available for viewing online at http://www.taser.com/. Units are expected to ship in the first half of 2005.
For more information on TASER life-saving technology, please call TASER International at (480) 444-4000 or visit our website at http://www.taser.com/.
For further information contact Steve Tuttle, Director of Communications, at [email protected]. Visit the company’s web-site at http://www.taser.com/ for facts and video.
SOURCE TASER International, Inc.
Steve Tuttle, Director of Communications of TASER International, Inc.,[email protected] or Media ONLY Hotline, +1-480-444-4000."
Click here to read the original VDPM press release (above), in its entirety.
TASER X26 Less-Lethal Weapon System Gets Audio/Video Recording Capability by David Crane

David Crane started publishing online in 2001. Since that time, governments, military organizations, Special Operators (i.e. professional trigger pullers), agencies, and civilian tactical shooters the world over have come to depend on Defense Review as the authoritative source of news and information on "the latest and greatest" in the field of military defense and tactical technology and hardware, including tactical firearms, ammunition, equipment, gear, and training.
Previous Micro Air Vehicle (MAV): Backpackable UAV for Tactical Reconnaissance & Surveillance
Next Raphael Skylite B Mini-UAV for Tactical Reconnaissance and Surveillance Ops