This thing’s got "riot control" written all over it. If you’ve got a G8 summit meeting or some other globalization or symbol-of-government-authority-and-control event coming to your town, and you’re worried about the usual contingent of crazy, violent rock-and-molotov-cocktail-throwing leftist/anarchist rioters, the appropriately-named Strafer MK4 MOD 0 CO2-powered less-lethal weapon system/machine gun (airsoft-type) firing .177/4.5mm or 6mm polymer BBs at 250-625 FPS (Feet Per Second) and 9,000-10,500 RPM (Rounds Per Minute–which translates to 150-175 rounds per second–out of a 7,200-96,000-round hopper might just be the ticket for ya’. And, you can effectively engage those little whipper-snappers from a distance of 75 yards. The Strafer’s maximum engagement range is 125 yards.

Manufactured by Piper’s Precision Products (P3 a.k.a. PPP) and marketed by X-Caliber Tactical, the… 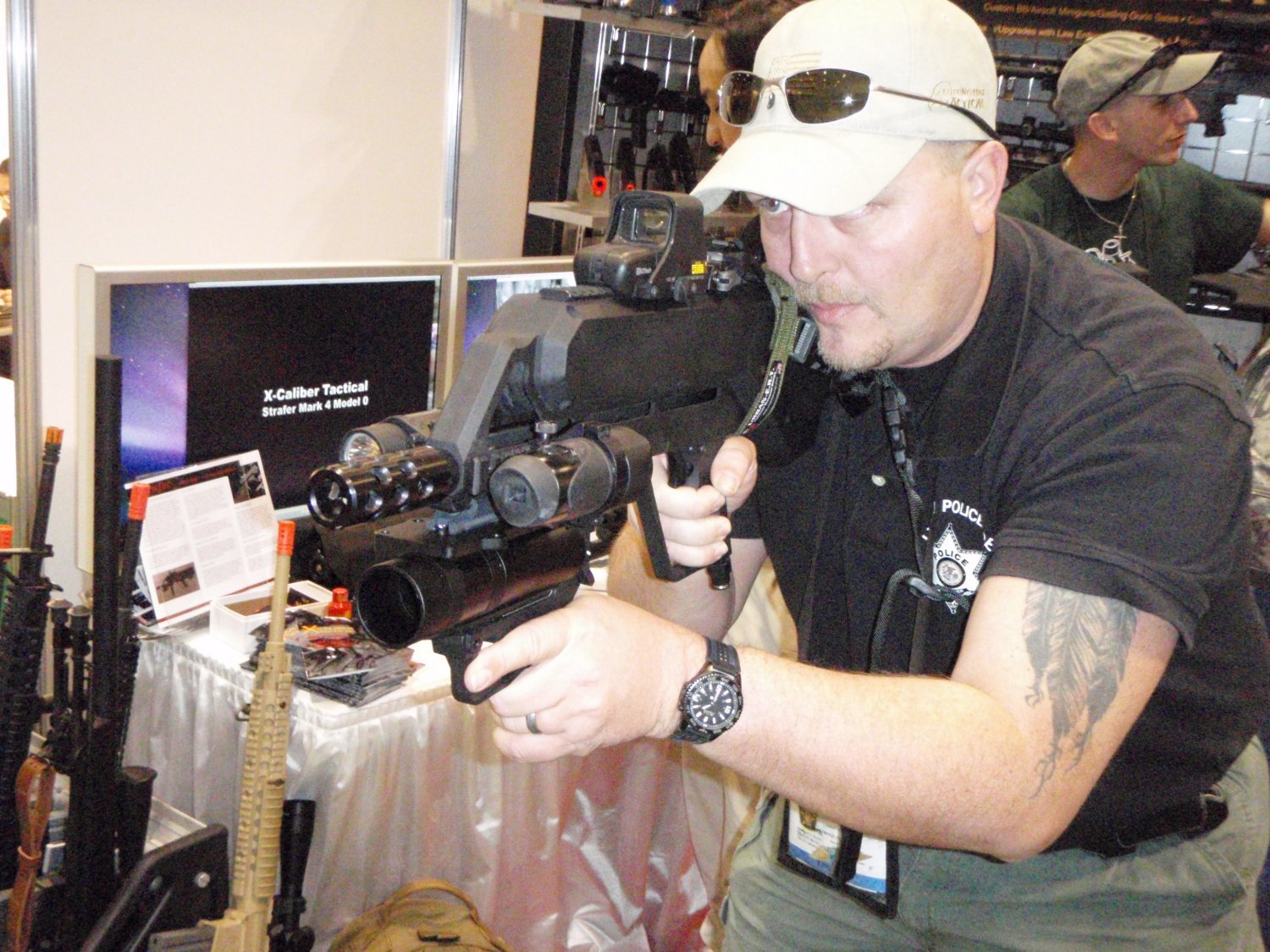 Strafer MK4 Mod0 less-lethal weapon system is a sadist’s dream come true, and potentially dangerous in the wrong individual’s hands, so police departments may want to be careful in their choices of recipients. Psychological testing and some Taser-style sensitivity training (where anyone who uses the Strafer has to first be shot with it themselves) may not be a bad idea. The Strafer video X-Caliber Tactical was playing at it’s booth at SHOT Show 2009 showed footage of this very thing, where LEO (Law Enforcement Officer) test subjects took some shots from the Strafer to the backs of their legs, and it didn’t look like a pleasant experience, judging by the way said LEOs were hopping around and whining in pain and generally acting like little girls after they got "Strafed".

Wussies. Kidding. I, no doubt, would have reacted in similar fashion if I’d taken a hail of high-velocity plastic BBs in the legs from the Strafer. But, then again, I wouldn’t have been stupid enough to volunteer to get shot with it in the first place. That’s why God gave you a brain, so you’ll hopefully be smart enough not to volunteer to get shot, Tasered (or is it Tased?), etc. 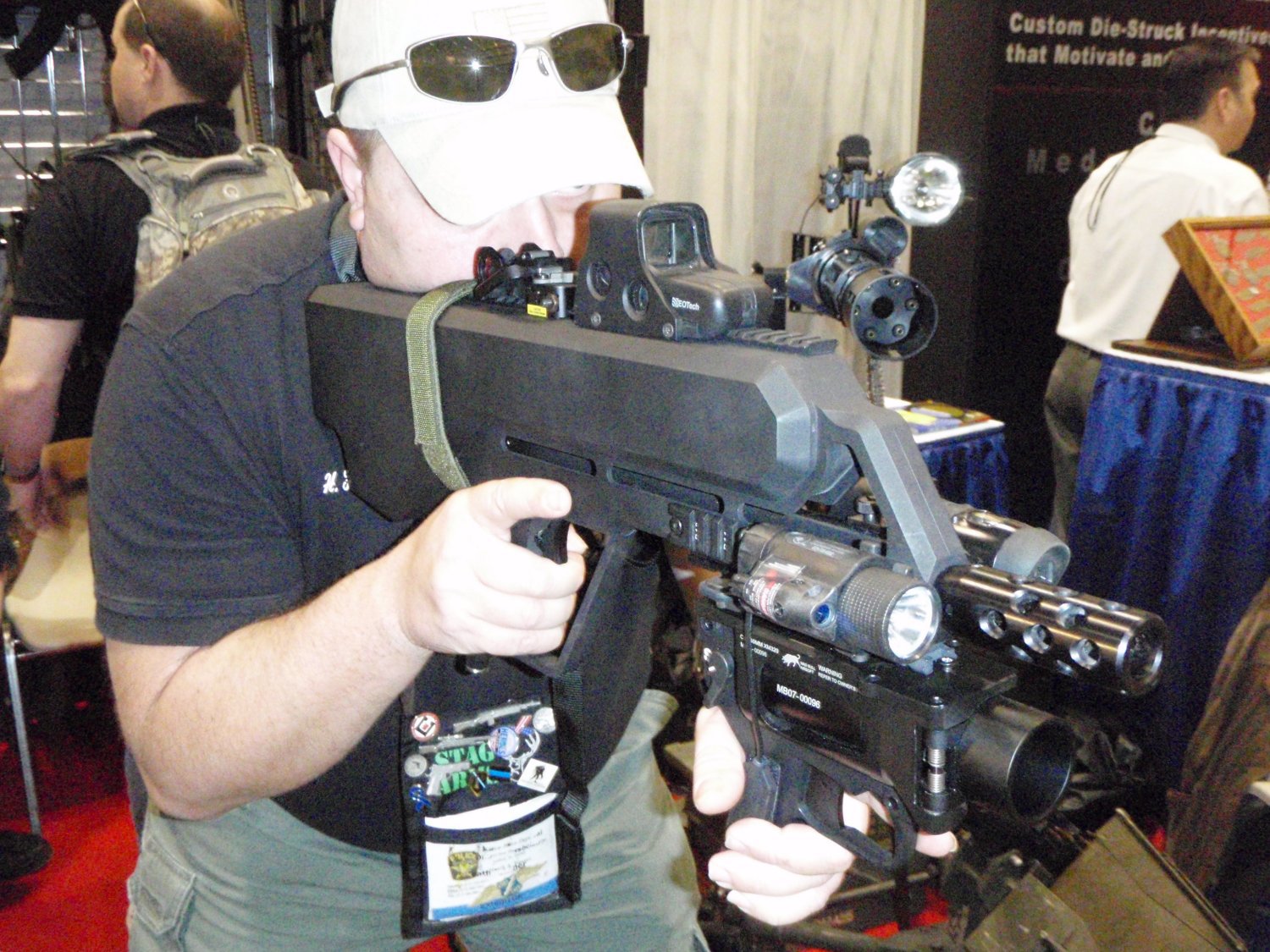 But I digress. In all seriousness, the P3 Strafer MK4 Mod 0 "Less-Than-Lethal Weapon" looks like a potentially viable anti-riot a.k.a. riot-control, crowd control, and hostile-subject-control tool for law enforcement, provided it’s not misused and abused. It also looks like a ton of fun, and we can’t wait to T&E one at the range on some unsuspecting people and/or small animals that walk into our line of sight at the range. Again, kidding. We’ll pay for volunteers (and their pets) to stand there and take it. Still kidding (I can’t stop.). Nah, we’ll shoot paper and steel, just like we do with the lethal hardware we test.

It should perhaps be noted that we here at DefenseReview aren’t necessarily always huge fans of law enforcement/police use of less-lethal control devices a.k.a. less-lethal weapons overall, since there’s a potentially sinister, Nineteen Eighty-Fourish aspect about them (less-lethal/non-lethal weapons). Frankly, they offer A LOT more room for abuse and misuse than do lethal weapons like firearms, and can be overused or unnecessarily used in order to dominate and control people. When an LEO knows that a weapon is less-lethal/non-lethal and therefore either can’t kill or is much less likely to kill the person on whom he/she’s using it, he/she is probably going to be much more inclined and/or quicker to use it on that person than he/she would a lethal weapon like a firearm. In some cases, he/she may use it even if it’s not necessarily the best way to go, or even warranted. Video evidence of some bad Taser shoots bears this out. In some cases, Tasers have been used to punish a subject (i.e. person/human being) for non-compliance, rather than to prevent an imminent attack against the officer(s).  Having written that, we’re guessing that Tasers are employed/deployed properly by the majority of police officers, but there have been cases of abuse of the technology. 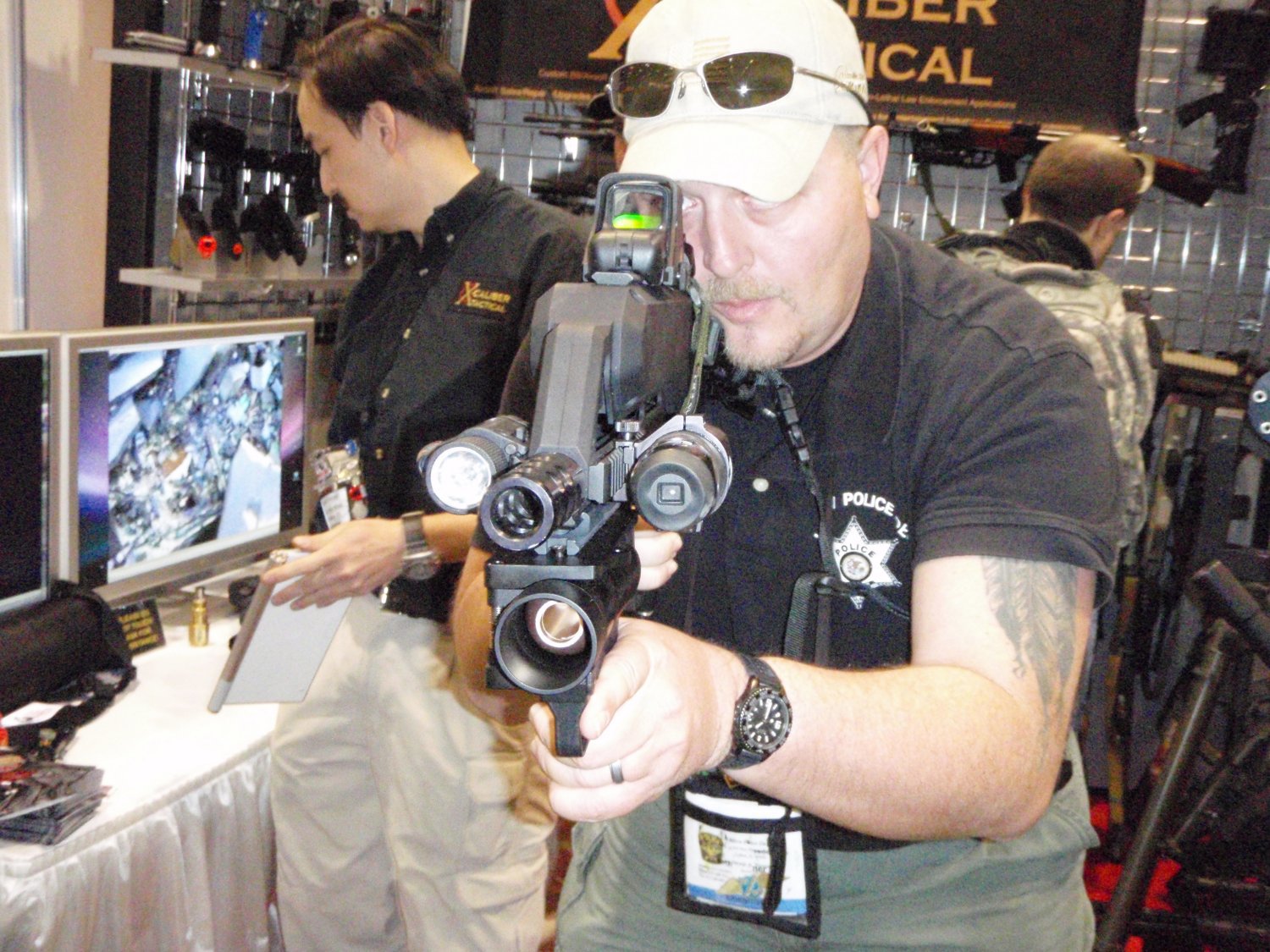 I should also note that I myself own a Taser X26, and sometimes carry it as a backup to my Glock 19 (G19) high-capacity 9mm Parabellum/9x19mm NATO pistol. I like the X26, and I’m a Taser proponent, in general. It offers me an escalation-of-force option before I go to my pistol, which I like. It’s nice having a tool at your disposal that can be used to completely disable someone without doing them any permanent physical or lethal harm. So, just like a firearm, a Taser in the hands of a well-balanced law abiding citizen/civilian or LEO is a good thing.

However, put one in the wrong guy’s (or girl’s) hands, and it can quickly become an abuse and punishment/torture tool. There are therefore moral and ethical considerations that come into play with less-lethal devices like the Taser X26 and Strafer that don’t apply to firearms, since firearms can only be employed/discharged under one circumstance, and one circumstance only: defense of human life against a lethal or potentially lethal attack where either death or significant bodily harm/injury is a likely or at least very possible result. 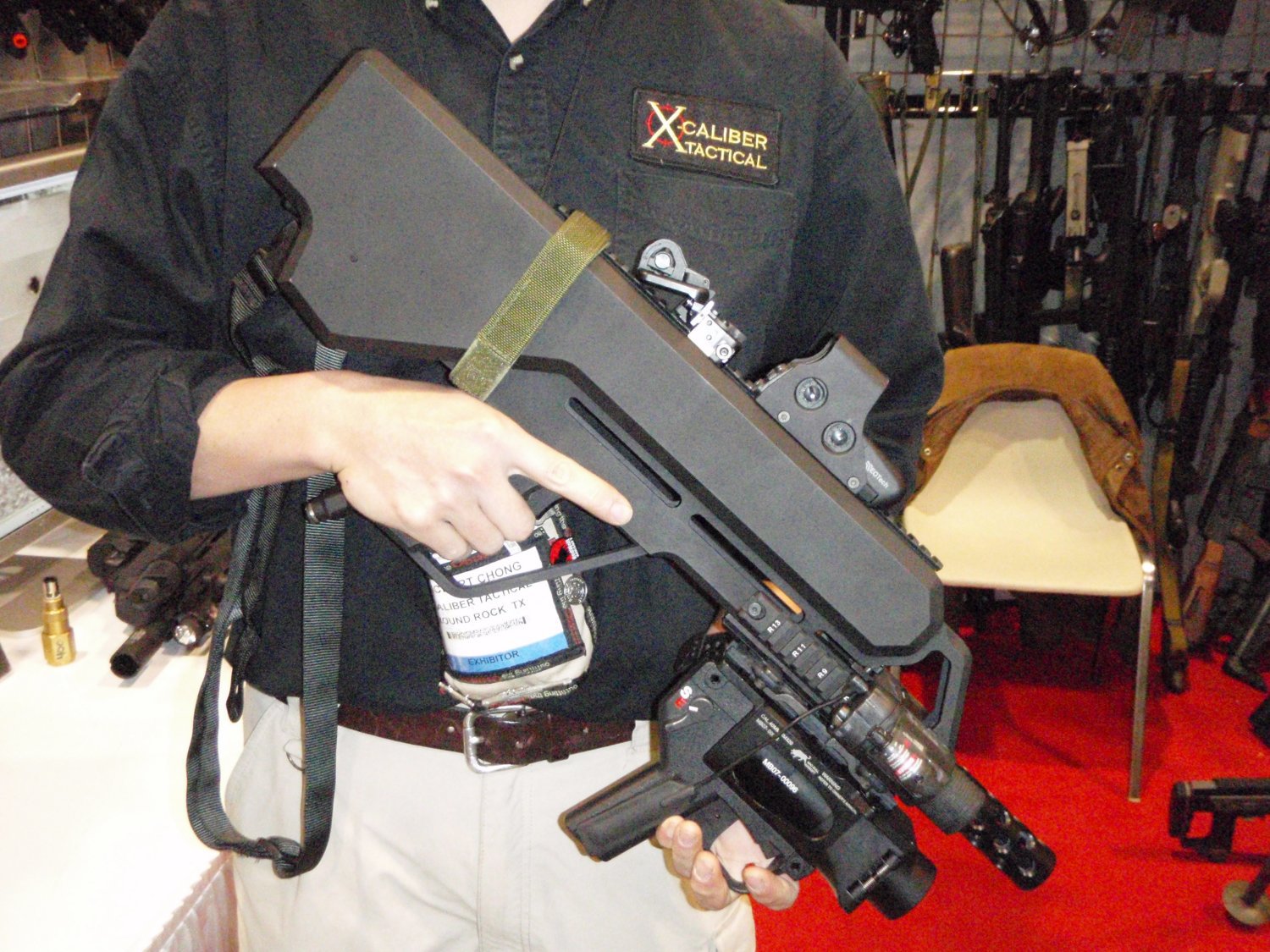 Since the odds are that Tasering (a.k.a. "Tasing") or Strafing somebody isn’t likely to kill them (to the contrary, it’s highly likely that it won’t kill them), it becomes much easier psychologically for the user (LEO or civilian) to employ/discharge it under a greater variety of circumstances, and abuse it. Again, I’m a proponent of LEO’s and law-abiding civilians carrying and using Tasers, but only if they’re responsible people and have the proper mindset for it.

The Strafer MK4 Mod 0 less-lethal machine gun/weapon system is a very interesting and cool piece of equipment that may very well prove to be a highly useful tool for law enforcement end-users. Time will tell. But there’s one thing that we can pretty much guarantee you even before we’ve T&E’d it ourselves: if it proves to be accurate, reliable and durable, it’s going to be a hell of a lot of fun to own and shoot recreationally. 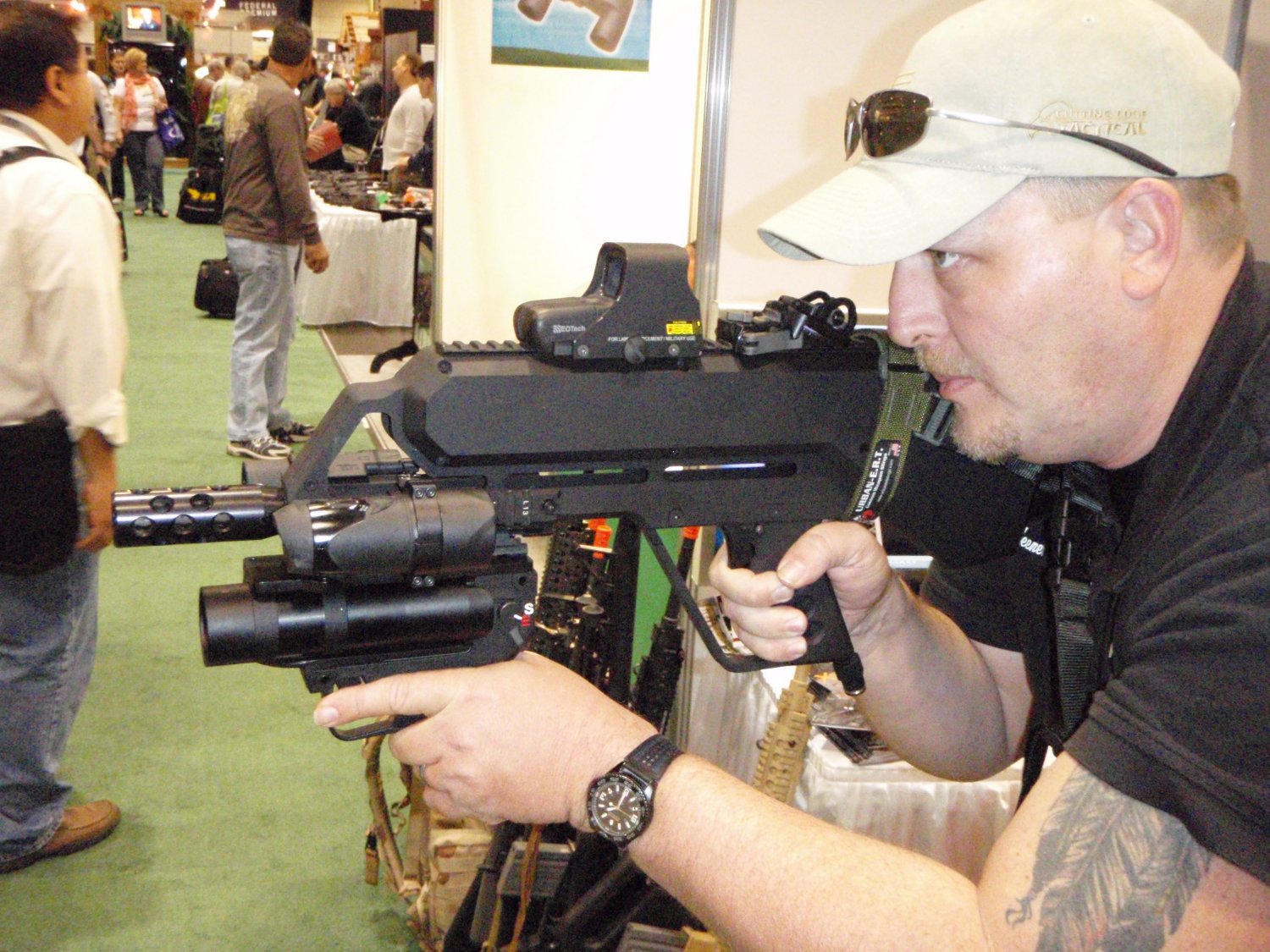