All photographic images contained in this article were taken by
DefenseReview.com at AUSA Winter Symposium 2007, and they are the exclusive property of
DefenseReview.com. DefenseReview.com owns the copyright on these
photos. All photos were shot with a 7.2-megapixel Sony Cyber-shot
digital camera (Model #: DSC-P150).

While DefenseReview was walking the floor in the military and law enforcement section near the Combined Systems, Inc. (CSI) (Military) / Combined Tactical Systems, Inc. (CTS) (Law Enforcement) booth at SHOT Show 2008, we ran into a Marine who’d been involved with the Joint Non-Lethal Weapons Program (JNLWP).

While I was speaking with him, he asked me if I was familiar with the CSI VENOM Non-Lethal Launcher a.k.a. VENOM Launcher. I told him I was, since I’d seen it at CSI/CTS’ booth at AUSA Winter Symposium 2007 (Ft. Lauderdale, FL). Visually, the system looked very interesting, and I was interested in learning more about it, but life took over and I just never got around to it. Anyway, the gentleman (Marine) I was speaking with told me that VENOM, or Vehicle Non-Lethal Munition, was an… 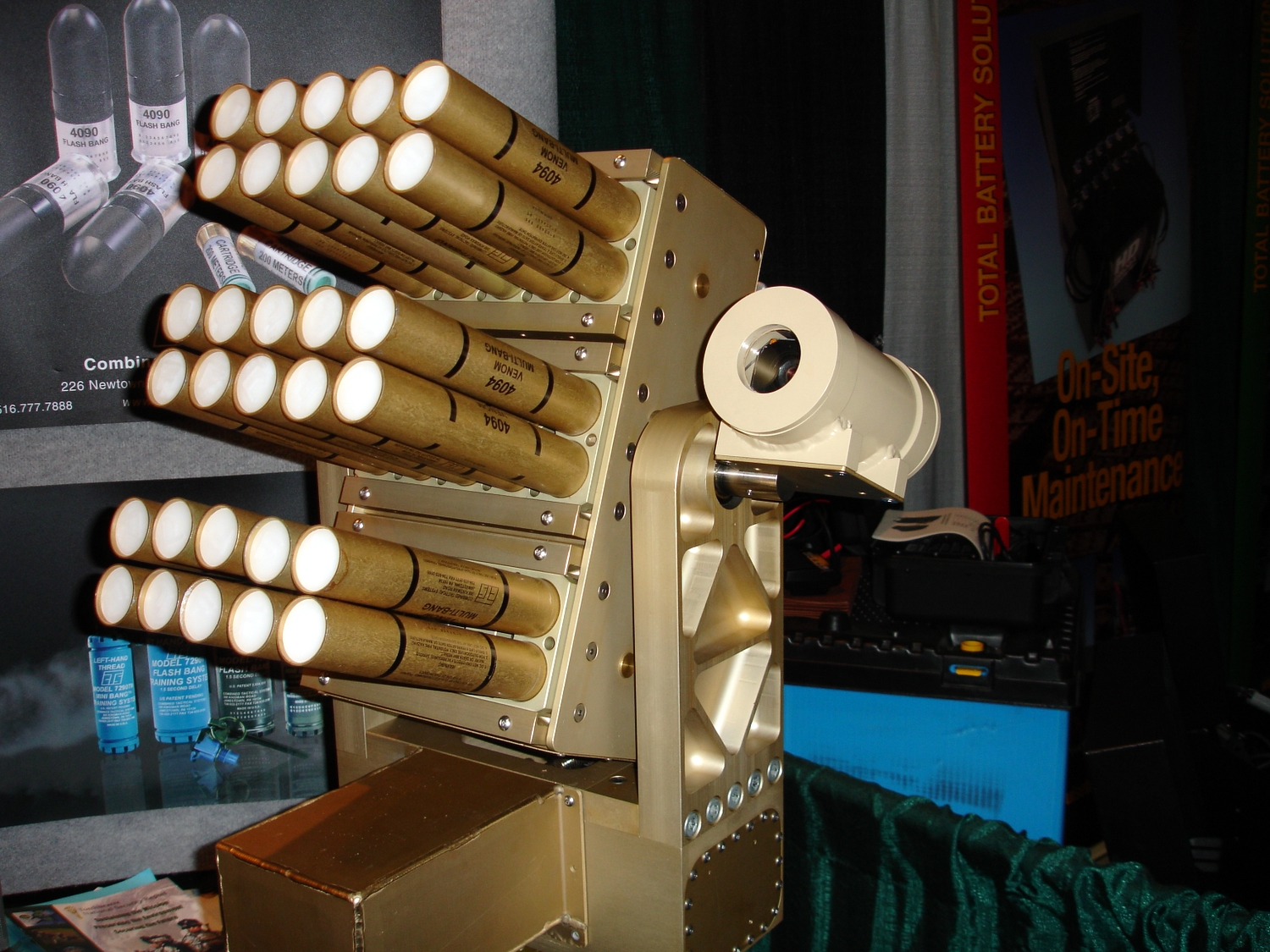 effective system and encouraged me to learn more about. So, I plan to do that.

However, in the meantime, I thought I’d show our readers the photos we took of the VENOM 40mm Multiple Grenade Launcher (less-lethal) system at AUSA Winter Symposium (2007), and share some basic info on it:

The VENOM Non-Lethal Launcher system is a less-lethal 40mm munitions array / launcher system (DefenseReview’s description) that could perhaps also be described as a less-lethal 40mm munitions battery (DefenseReview’s description), since it fires less-lethal 40mm canister rounds rather than 40mm grenades, per say. VENOM can be mounted on structures for perimeter security applications, ground vehicles (manned and unmanned) for security operations a.k.a. peacekeeping operations, or ships for ship security / ship defense applications. The VENOM 40mm Launcher (less-lethal) was developed in response to the USS Cole bombing (October 12, 2000) for peacekeeping and security operations in urban environments in order to mitigate civilian casualties, in case a crowd gets hostile or enemy combatants decide to use civilians ans protective shields during an attack. In a situation like that, you have to be able to protect structures (buildings), vehicles, bases, etc. without necessarily killing the threat or human shield. 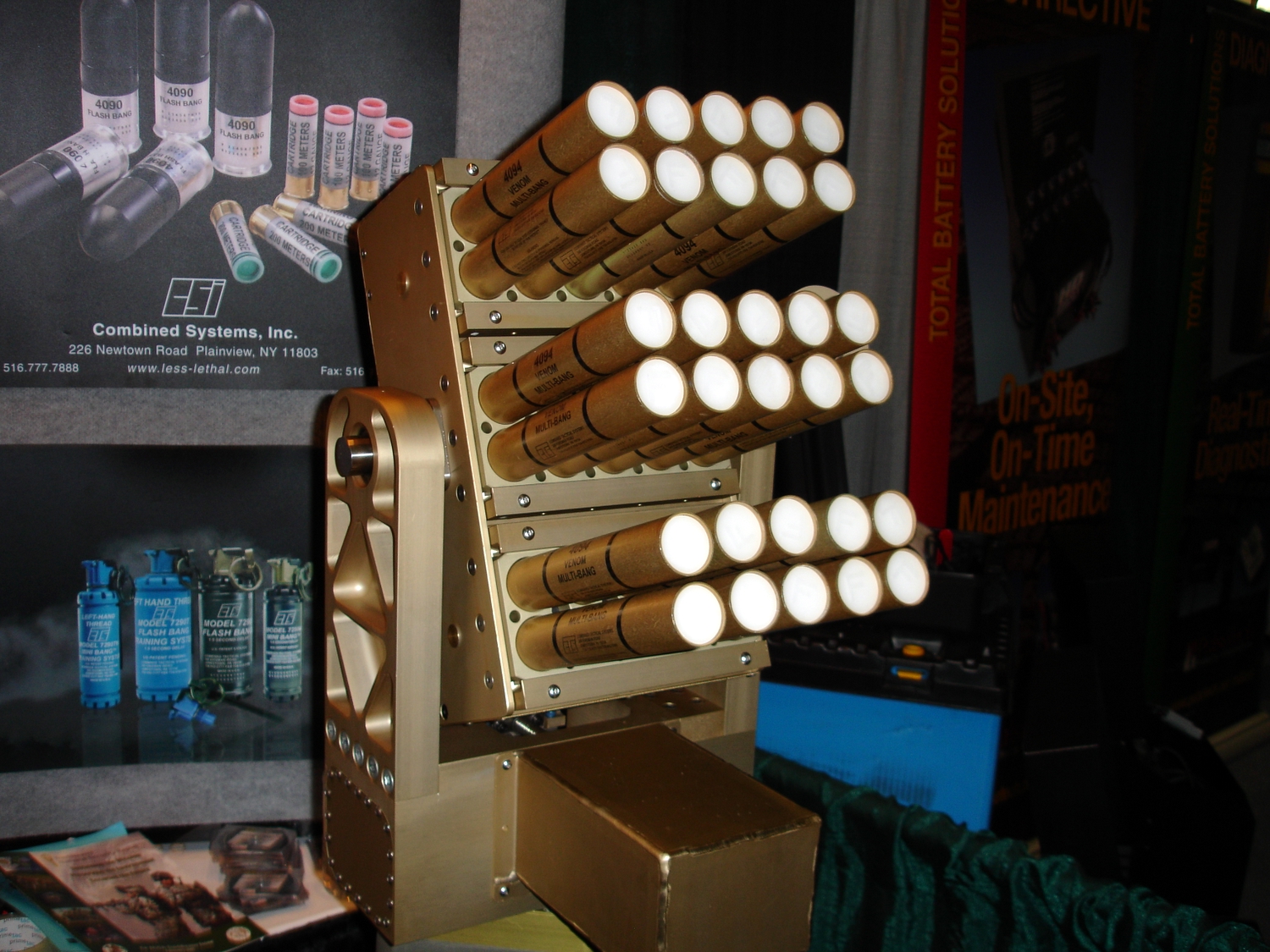 Speaking of munition smorgesbords, the VENOM Non-Lethal Launcher can launch all kinds of less-lethal 40mm grenades/munitions, including Smoke (including colored smoke), Smoke / CS Gas (tear gas), Sting Ball, Flash Bang, Multi-Bang, etc., and you can remotely fire 30 rounds (9-inch cartridges) per launcher in immediate succession, thanks to the VENOM’s reliable fire control system developed and manufactured by Remington Arms Company, Inc. (most likely Remington Military Products Division), which is now owned by Cerberus Capital Management, L.P.. If you mount two launchers, you’ve got 60 rounds at your immediate disposal, and so on. The rounds are stacked horizonally in 3 groups (or "levels") of 10 rounds, with each group of ten rounds containing two horizontal rows of 5 rounds. Three groups/levels are oriented at 2 degrees horizontal, 12 degrees elevation and 23 degrees elevation, respectively, for various tactical engagement distances.

Each round/cartridge contains up to seven projectiles, or submunitions, which, according to company literature, may include:

Combination cartridges containing 5 smoke and 1 flash bang or impact cartridges that dispense a variety of projectiles such as rubber balls and foam batons.

4 flash bangs that are projected simultaneously and detonate at a range of 125 meters.

Single flash bang with an extended range of up to 500 meters.

All VENOM munitions are hermetically sealed and waterproofed for use in adverse environments under combat conditions.

CSI engineers, most likely led by Mike Brunn, CSI’s Director of Engineering, and Research and Development (R&D), have developed long range and multi-bang flashbang rounds for maritime applications in littoral zones, and have been working with AM General Corporation to integrate VENOM on HMMWVs (a.k.a. Humvees a.k.a. Hummers). Integrating the Venom system on various platforms (structural, vehicle, ship, etc.) would seem to be fairly easy, since the system’s modular, and can be custom configured to each platform.

The VENOM Launcher system / munitions array can be integrated with lethal weapons systems like the Browning M2HB "Ma Deuce" .50 BMG HMG (Heavy Machine Gun), MK-19 GMG (Grenade Machine Gun), and FN M240-series MMG (Medium Machine Gun) on HMMWVs (High Mobility Multipurpose Wheeled Vehicles), MRAPs (Mine Resistant Ambush Protected Vehicles), weaponized UGVs (Unmanned Ground Vehicles) a.k.a. weaponized ground robots, and other vehicles, according to mission-specific requirements. Regarding weaponized robots a.k.a. armed robots, Venom has been tested on the Gladiator TUGV (Tactical Unmanned Ground Vehicle), although Defense Review doesn’t know the results of that test. Less-lethal munitions basically round out the weapons packages on vehicles and robots, so that warfighters have more choices along the continuum of force a.k.a. force continuum. Note: "Less-lethal munitions" is a more accurate description than "non-lethal munitions" (also written "nonlethal munitions"), since these munitions can be lethal if deployed/employed incorrectly.

DefenseReview plans on interviewing Mike Brunn at some point to gain further insight into the Venom Launcher’s attributes, capabilities, and development history. We’re also going to try to get our hands on system test results from the folks at both CSI and the Joint Non-Lethal Weapons Program.

Author’s Note: I hope I got a business card from the Marine I spoke with at SHOT Show about the VENOM System, so I can follow up with him and learn more about his experience(s) with it. Looks like I have to go on a search.

David Crane started publishing online in 2001. Since that time, governments, military organizations, Special Operators (i.e. professional trigger pullers), agencies, and civilian tactical shooters the world over have come to depend on Defense Review as the authoritative source of news and information on "the latest and greatest" in the field of military defense and tactical technology and hardware, including tactical firearms, ammunition, equipment, gear, and training.
Previous MagPul Masada / Bushmaster ACR (Adaptive Combat Rifle) Update
Next B.E. Meyers / SureFire Open-Prong Flash Hiders/Adaptors for Special Operations