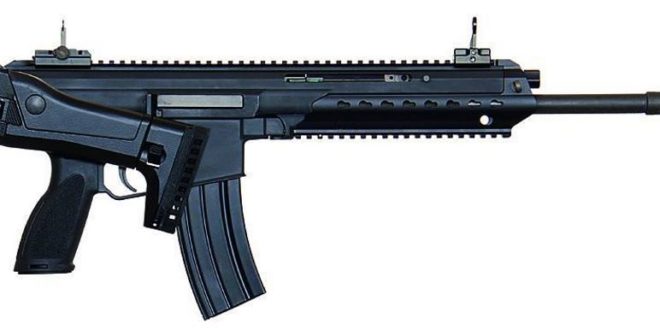 When DefenseReview (DR) first learned about the Heckler and Koch (HK) HK433 Assault Rifle/Carbine/SBR (Short Barreled Rifle), we weren’t impressed, and that hasn’t really changed. However, several of our professional/industry contacts have either mentioned it to us or asked us about it over the last few months, so we figured we might as well post something about it. Generally, the gun’s rollout’s been rather lackluster. It’s DR’s understanding that the HK433 was first shown behind closed doors at SHOT Show 2017. We were at that show, and we did stop by the HK booth, but we didn’t get to see it, so we’re not quite sure who got to see it. It’s a strange gun, as it appears to be HK’s idea of the SCAR-L (FN MK 16 SCAR-L 5.56mm NATO assault rifle/carbine/SBR), albeit with a non-reciprocating charging handle, which would appear to be the one improvement over the original. So, kudos for that. However, DR isn’t a big fan fo the original, as the FN SCAR-L is itself almost a gun without a purpose.

Allow us to explain. While the FN MK 17 SCAR-H 7.62mm NATO (7.62x51mm NATO) fulfills an actual niche in the combat/tactical firearms market as a lightweight, modular 7.62mm blaster (as does the HK417, quite frankly, although to a lesser degree, since it’s a bit heavier than the SCAR-H) that’s significantly easier to carry and modify than a M14 or FN FAL, the military-grade, select-fire FN SCAR-L 5.56mm offers absolutely zero combat advantage/capability over the M16 Assault Rifle/M4/M4A1 Carbine system (or HK416, for that matter), and the semi-auto-only FN SCAR 16S likewise offers zero measurable combat/tactical performance advantage over any of the latest and greatest high-quality tactical AR-15 carbines out there. So, while DR likes the FN SCAR-H and FN SCAR 17S, we’re not too keen on the FN SCAR-L and FN SCAR-16S. So, considering that the HK433 essentially appears to be a SCAR-L copy (right down to the folding stock design), albeit with the aforementioned non-reciprocating charging handle, it’s really impossible for DR to be a fan of it. How can we like the copy, when we don’t like the original?

The craziest thing about the HK433 is that there doesn’t appear to be a HK434 7.62mm NATO variant like with the SCAR. That just seems dumb, but maybe it’s coming. We don’t know. We are curious to find out which “genius” at HK came up with the HK433.

Bottom line, at present, the gun (HK433) just seems to be a waste of everyone’s time, including HK’s (and ours, almost), unless of course they can sell a lot of them on the MIL/LE and commercial markets. The gun will still bore us, but if they can sell them in large numbers, we’d have to acknowledge that as a success. After all, math is math, and money talks. You just can’t argue with big sales numbers if/when they happen. So, we’ll see.

For the record we take no pleasure in writing this about one of HK’s products. Generally, we’re a fan of HK firearms, particularly their pistols, including the HK VP9. While we’re Glock guys over here (despite our dislike of Glock’s marketing team), or Blackside Glock guys even more so, we dig the VP9. It’s a nice looking gun, feels good in the hand, shoots well, and has been reliable in our experience. HK did a nice job with it, in our opinion.

That reminds us. There is one nice, worthwile thing about the HK433. It’s a nice looking rifle, in our opinion. HK did a nice job with the gun’s visual aesthetics, as they usually do. So, there’s something nice we can say about it. It’s a nice piece of ballistic art.

All that said (or written, in this case), since it exists, Defense Review looks forward to firing a select-fire HK433 sometime, just to see how it shoots, and because we just enjoy shooting. And, if you’re a well-to-do individual with a lot of money burning a hole in your pocket, and you’d like to purchase a semi-auto-only HK433 variant if/when it becomes available on the commercial market, go for it. We wholeheartedly support you. There’s absolutely nothing wrong with acquiring one for your collection, and we’re guessing it’ll be enjoyable to shoot. Just don’t expect it to shoot any better or more reliably than any of your ARs (or SCARs). Listen, there are certainly worse things than a HK433 sitting in your gun safe, and he with the most guns wins, as we all know. I mean, it goes without saying.

Editor’s Note: As long as we’re discussing the FN SCAR weapons, and bashing the SCAR-L 5.56mm a little bit, it should perhaps be noted that DR quite enjoyed test-firing the FN SCAR PDW (Personal Defense Weapon) 5.56mm at the 2011 International Infantry & Joint Services Small Arms Systems Symposium, Exhibition & Firing Demonstration Range Day shoot at the Camp Atterbury Joint Maneuver Training Center (CAJMTC) firing range, where we also ran the HK416C a littl bit, among other weapons. That was a fun day.

David Crane started publishing online in 2001. Since that time, governments, military organizations, Special Operators (i.e. professional trigger pullers), agencies, and civilian tactical shooters the world over have come to depend on Defense Review as the authoritative source of news and information on "the latest and greatest" in the field of military defense and tactical technology and hardware, including tactical firearms, ammunition, equipment, gear, and training.
Previous Russian Navy to Get Pantsir-ME Missile Cannon Ship-Defense System: ‘Robo-Cop of the Seas’, Brought to You by KBP (Russian Instrument Design Bureau)
Next Sukhoi PAK FA T-50 ‘Raptorsky’ Going into Production as Sukhoi Su-57 5th-Gen Multi-Role Low-Observable/Stealth Fighter Jet Manned/UAS/UAV/Drone Aircraft!