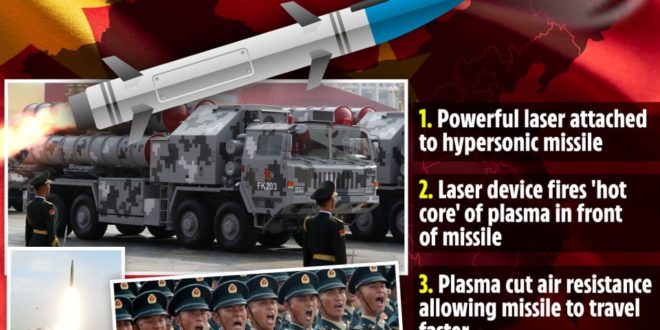 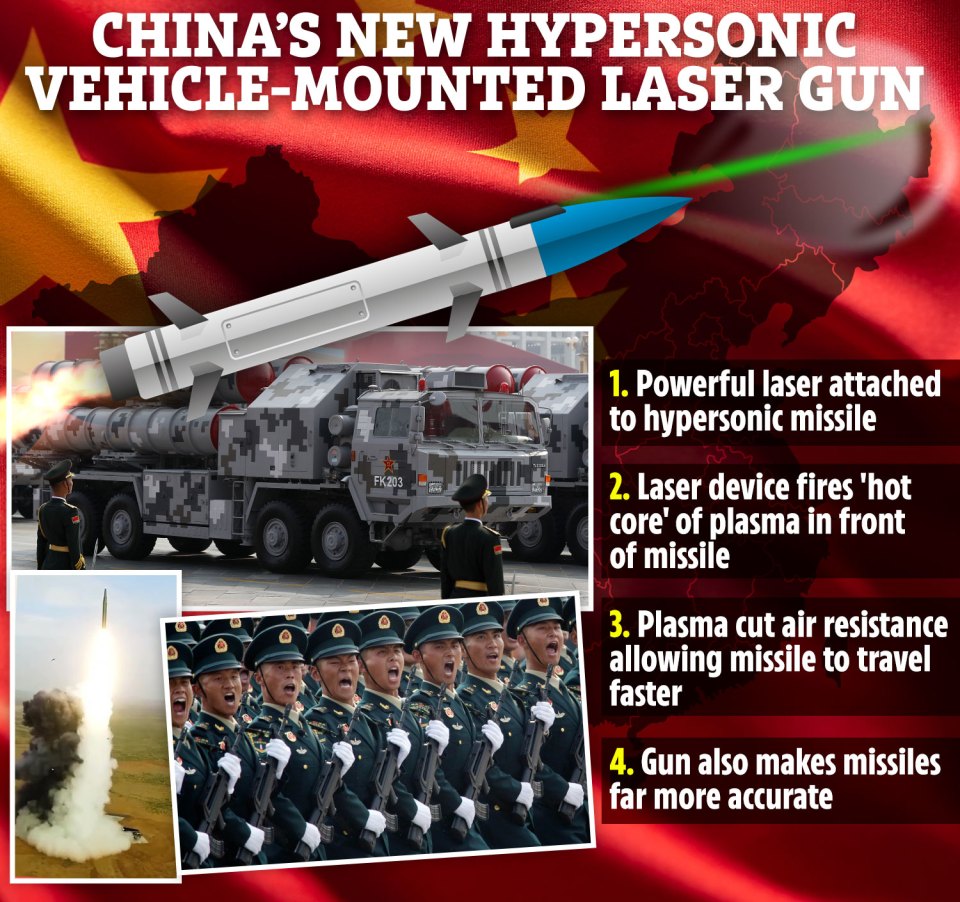 Well, this isn’t good. Apparently, they’ve been busy little beavers over there at Beijing’s Space Engineering University, developing a “powerful laser gun” mounted onto hypersonic missles and aircraft to increase speed (and obviously range) by cutting air resistance by 70 percent (70%) or more. According to the Chinese laser experts, the laser gun “can change the shock wave structure in front of the hypersonic vehicle and then change the speed and pressure distribution to achieve drag reduction” by creating a teardrop-shaped plasma cloud in front of the aircraft or missile. Basically, the plasma cloud generates foward-moving air/wind in front of the hypersonic aircraft or missile by spinning in opposite directions.

The kicker was developing a laser gun that was small and light enough to actually work, and the Chinese have reportedly been successful in doing this. Whle the hypersonic vehicle-mounted laser gun may increase the vehicle’s weight, this is allegedly more than compensated for by the laser’s performance.

Beijing’s Space Engineering University is of course doing this on behalf of the not-so-good folks over at the The People’s Liberation Army (PLA), the same folks that’ve been illegally building militarized and weaponized islands in the South China Sea, and essentially daring us (the USA) to destroy them. Those very islands could theoretically become launching points for these China’s laser-enhanced hypersonic vehicles (aircraft and missiles), so they pose a serious tactical and strategic military threat to the US Navy, Taiwan and Japan, and even to the US mainland in a thermonuclear conflict.

Needless to say, if China’s able to successfully develop and deploy this hypersonic weapons/laser technology, it’s potentially very problematic for the US Military to combat, so it must be effectively addressed and countered.

David Crane started publishing online in 2001. Since that time, governments, military organizations, Special Operators (i.e. professional trigger pullers), agencies, and civilian tactical shooters the world over have come to depend on Defense Review as the authoritative source of news and information on "the latest and greatest" in the field of military defense and tactical technology and hardware, including tactical firearms, ammunition, equipment, gear, and training.
Previous Tyrant Designs Glock Magwell(s) for Faster, Smoother Reloads of Your Glock Pistol(s)…They’re Really Good.
Next Cobalt Kinetics Relaunched, Updated BAMF-Pro Competition/Tactical AR-15 Carbines and Pistols in the Works