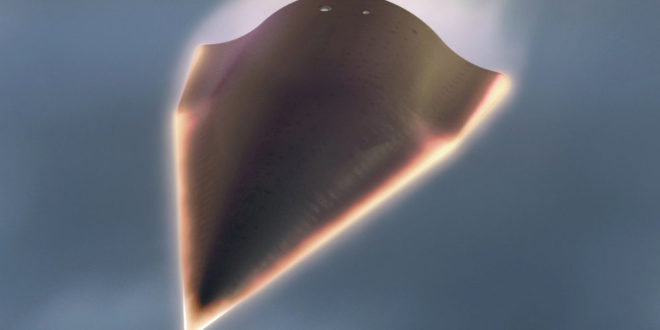 DefenseReview (DR) has been following both U.S. and Chinese hypersonic glide vehicle (HGV) technology for awhile now, so the new Russian Yu-71 Hypersonic Attack Aircraft (HAA)/”nuclear glider” (or, “nuke glider”) and Yu-74 ultra-maneuverable HGV don’t exactly come as a surprise to us. They’re expected, particularly due to a number of environmental factors, including the just-mentioned U.S. military HGV development efforts, and deteriorating NATO/Russian relations relating to the Eastern Europe, including the Baltics and the Ukraine. So, one must ask the question, how prepared is the United States to defend against these new hypersonic intercontinental nuclear threats, which can come in at speeds between 3,840 miles per hour (Mach 5) and 7,680 miles per hour (Mach 10)?

What’s been going on recently between the United States and Russia politicallly is of course troubling enough, but when you add the Russian RS-24 Yars (NATO reporting name SS-29) MIRV (Multiple Independently Targetable Reentry Vehicle)-equipped thermonuclear intercontinental ballistic missile, China’s own HGV tech and Sino-Russian joint military exercises to the mix (which DR’s also been following), war-gaming a potential nation-state World War III (WWIII) scenario becomes downright scary, especially when the Russians are notorious for playing military chess, not checkers, and both Russia and China are arguably prepared to endure more human losses than the United States, a rather importan social dynamic that can’t be overlooked.

So, what do we do? What’s the answer. Well, hopefully, the U.S. military industrial complex has some classified offensive AND defensive technologies operational that can act as both a deterrent and actual martial solution to the problem. But, since DR doesn’t and can’t know what those are, we’re guessing the answer is a combination of our own hypersonic aircraft and weapons and high-powered laser technologies to zap the incoming hypersonic vehicles and counter-attack the enemy (or, enemies, plural).

One of DR’s primary questions about the Russian and Chinese HAA/HGV tech is whether or not the vehicles generate a plasma field/shield around it that can effectively camouflage the vehicle and/or disrupt an incoming high-powered laser beam, and thus avoid both detection and destruction during its flight. Russian scientists and military aircraft designers/developers have been experimenting with plasma field generation tech since the late 1970’s, so one would think they’re pretty far along by now. Oh, and let’s not forget China’s recent development of a >new ultra-thin, lightweight “tunable” UHF microwave radar-absorbing stealth/cloaking material for both manned and unmanned combat aircaft and warships. The hits just seem to keep on coming. Its enough to drive a military defense analyst to drink.

Anyway, even without surrounding plasma fields/shields, the Russian and Chinese HGV’s are most likely going to be extremely difficult to hit, particularly if they’re launched in very large numbers at us. U.S. military weapons contractors therefore obviously have a pretty daunting challenge in front of them to meet, in protecting us from potential nuclear annihilation. Let’s just hope Russia and China don’t share their HGV weapons tech with Iran, at least not before the United States can develop and deploy a viable defensive solution.

Needless to say, in the meantime, Defense Review will continue to follow all open-source technological developments in the HGV weapons field, as they develop, to the best of our ability.