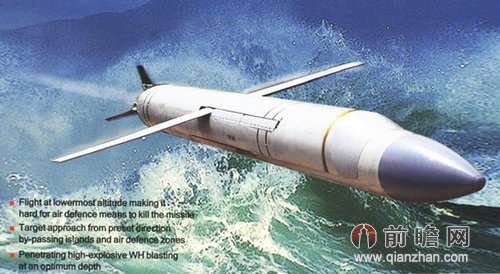 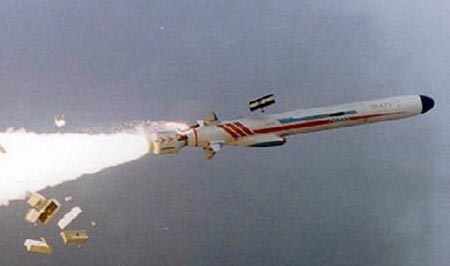 As if the Chinese DF-21D ASBM (Anti-Ship Ballistic Missile), WU-14 HGV (Hypersonic Glide Vehicle) and developmental supercavitating, supersonic submarine weren’t already enough to contend with in the future, the U.S. Navy will now have to contend with the Chinese YJ-18 (YingJi-18) missile, a submarine launched subsonic-to-supersonic anti-ship cruise missile (ASCM).

The YJ-18 ASCM first cruises at approximately 600 mph right above the surface of the water, and then accelerates to up to Mach 3 (3X the speed of sound) at about 20 nautical miles out from the target ship, making it “harder to hit with on-board guns”, and a “faster target for radars”, according to one Larry Wortzel of the U.S.-China Economic and Security Review Commission. Even worse, the new missile has an operational/engagement range of roughly 290 nautical miles, or roughly 14 times that of its predecessor, the YJ-82. The commission therefore concluded that the YJ-18 missile “could have serious implications for the ability of U.S. Navy surface ships to operate freely in the Western Pacific” in the event of a naval confrontation. In other words, there’s serious concern right now that the YJ-18 can significantly upset the current balance of naval power, i.e., the US Navy’s firepower advantage in the region, and work as an anti-access/area-denial weapon, presumably alongside the target=right>DF-21D ASBM ship killer, to keep US ships off the Chinese coast and outside the First Island Chain–in other words, everything the United States controlled during and after World War II (WWII).

If the Chinese can deploy a large number of DF-21D and YJ-18 missiles, the missiles are made as well as the iPhone (and not Chinese bridge steel), and the commission’s report conclusion that the Chinese military’s command and control infrastructure and targeting capability may be both insufficiant and vulnerable to electromagnetic attack (the report’s seemingly only bright spot) is inaccurate, they’ll probably be able to sink our surface ships at will, including our (U.S.) aircraft carriers. The only thing that would prevent them from doing that, at that point, isn’t our current anti-missile ship defense system array, which can most likely be overwhelmed with enough missiles, at least until we perfect and field our shipborne and airborne anti-missile laser weapons. It’s their justified fear of starting World War III (WWIII) with us, and the situation ultimately going nuclear (America’s nuclear arsenal still being a powerful deterrent), but that fear would appear to be abating a bit, as of late.

David Crane started publishing online in 2001. Since that time, governments, military organizations, Special Operators (i.e. professional trigger pullers), agencies, and civilian tactical shooters the world over have come to depend on Defense Review as the authoritative source of news and information on "the latest and greatest" in the field of military defense and tactical technology and hardware, including tactical firearms, ammunition, equipment, gear, and training.
Previous Hydraulic Recoil Buffers for the Tactical AR-15/M4/M4A1 Carbine/SBR: Friend of Foe? From the Enidine Recoil Buffer to the KynSHOT Recoil Damper (and Crosshair) Buffers!
Next DR Interview with David Pavlick of Nous Defions about Arsenal Democracy’s Future, and Tactical AR Carbine/SBR and Blackside Glock Combat/Tactical Pistol Accessories, Components and Parts: 10 Questions