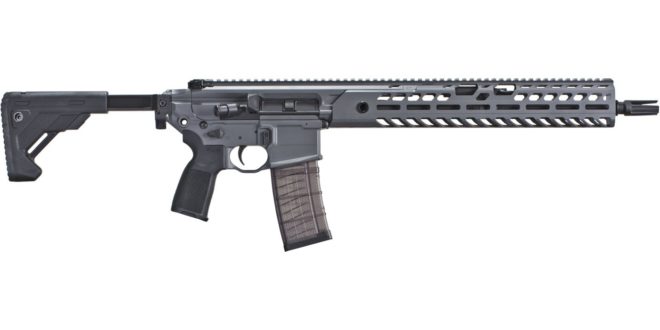 DefenseReview (DR) has been writing about the SIG SAUER MCX series select-fire and semi-auto-only carbine/SBR’s (Short Barreled Rifles) for about four and a half years now, ever since we were the first to publish photos on all the variants (as far as we’re aware) displayed at SOFIC (Special Operations Forces Industry Conference) 2013. We followed that up with several more articles (and more photos and videos) on the select-fire LVAW (Low-Visibility Assault Weapon) “Black Mamba” SBR/PDW variant of it from our personal experience firing it at the SIG SAUER Academy Range during the 2014 SIG SAUER New Media Writers’ Event. Good times.

Anyway, since then, we haven’t been paying all that close attention to the SIG MCX series weapons. That is, until today, when DR writer/contributor and chief new-product tester Jeff Gurwitch texted us a pic of the SIG MCX VIRTUS Patrol tactical AR (AR-15) carbine, along with a message reading “Sig rifles have never sparked my interest, until now.” Needless to say, we were intrigued. Perked our brains up. Then, Gurwitch emailed the your humble correspondent the following message (slightly edited for publication):

I first tried the SIG 556 rifle when it came out, I think around 2008 or 9-ish [as] the civilian version of the Sig 550. I thought it was a huge disappointment. Ever since then, I was never interested in Sig rifles, at all. That is, until I saw the VIRTUS [Patrol] rifle. It seems to incorporate everything I would want in a modern AR style rifle, with a lot of different features, and a cool look. Looks like it would make a great 3-Gun rifle. The only downside is the hefty price.

Gurwitch told DR he likes the overall look of the gun, which is another signifiant compliment (and accomplishment for SIG). Gurwitch is a bit of a stickler. And, let’s face it, when it comes to tactical firearms, visual/design aesthetics are important.

Full disclosure, to date, Defense Review’s only real experience is with the MCX-series weapons is with the select-fire LVAW-type variants (suppressed and unsuppressed, with supersonic and subsonic ammo), which we quite liked, despite they’re high cyclic ROF (Rate of Fire). We’ve never run any of the semi-auto-only variants at high round count. Hopefully, we can get a SIG MCX VIRTUS Patrol tactical AR carbine into Gurwitch’s highly-experienced hands for some serious T&E and review at some point.

In the meantime, Gurwitch’s immediately liking the VIRTUS this much on sight is significant, in and of itself, as it doesn’t happen very often. It’s rare, so it’s important, and thus has our attention.

David Crane started publishing online in 2001. Since that time, governments, military organizations, Special Operators (i.e. professional trigger pullers), agencies, and civilian tactical shooters the world over have come to depend on Defense Review as the authoritative source of news and information on "the latest and greatest" in the field of military defense and tactical technology and hardware, including tactical firearms, ammunition, equipment, gear, and training.
Previous Chinese Military Hypersonic Glide Vehicle (HGV) Strike Aircraft/Missile Tech Being Developed to Attack US Military Missile Defense Systems, with Nuclear Payloads: Can the US Military Win World War III (WWIII)?
Next Elbit Falcon MK II Optical Gunsight for the Tactical AR-15 Carbine/SBR: Combat-Proven and Bombproof Vintage Red-Dot-Sight Combat Optic!