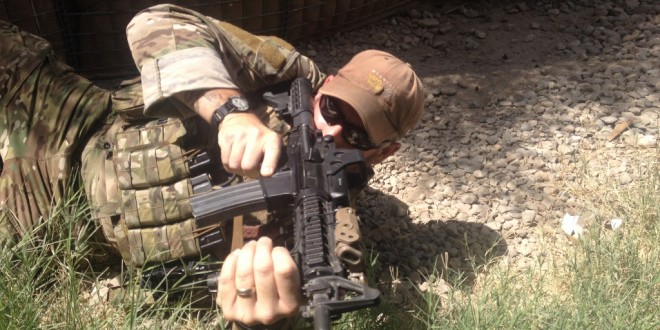 The following article is property of DefenseReview.com (DR) and Jason Borges (author), and is copyrighted material. If you are reading this article on another website other than DefenseReview.com, please email us the website address/URL (where the unauthorized DR article reprint is located) at defrev (at) gmail (dot) com. Thank you. 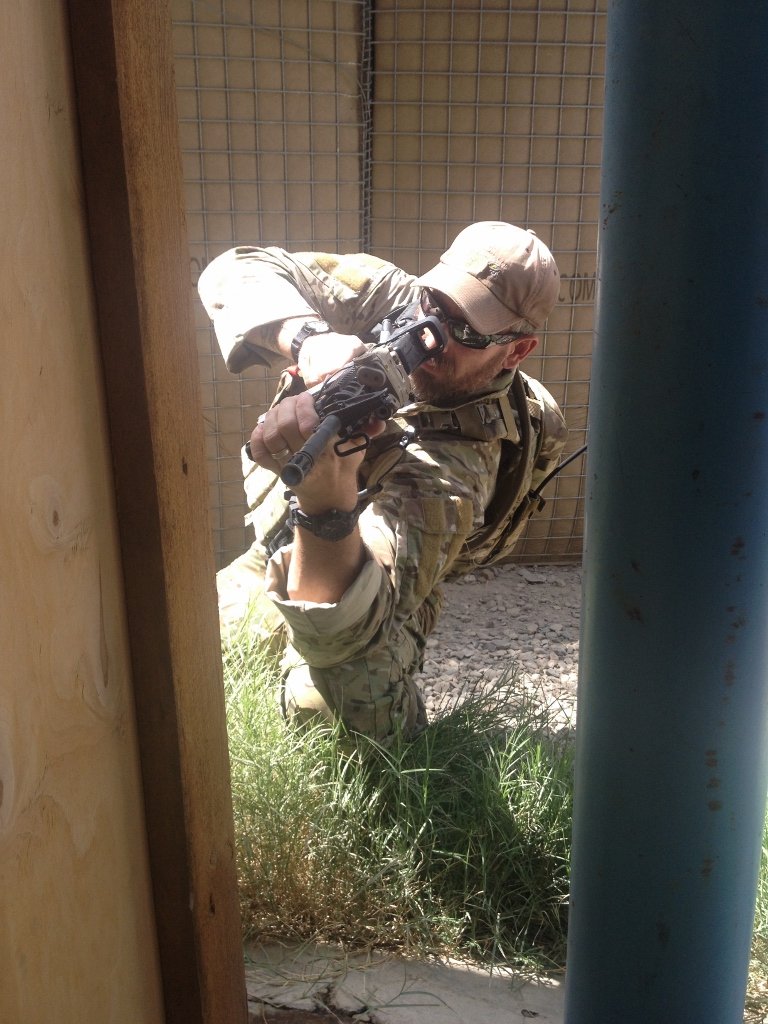 As a member of Army Special Operations for more than 16 years, I’ve shot countless rounds from pistols, rifles and shotguns. During my years as a tactical shooter, like most of my peers, I strove to improve on my tactical engagements, where speed and accuracy were essential to success. My teammates and I spent hours every day with our personal weapons conducting drills to the minutia in order to hone our skills and squeeze out the most performance possible. During all this time on the range, and during all of our experimenting with new techniques, the fundamentals of marksmanship remained constant.

Over the years I’ve worked with professional instructors who brought with them their own personal drills that they swore would make us better shooters. I worked with an instructor once who said the only way to clear a malfunction with a pistol was to cup the hand over the rear of the slide, pulling rearward while canting the pistol to the right side of the body with the ejection port pointing down toward the ground, so that the round would more easily eject. This seemed ridiculous to me, as a pistol has an ejector that’s designed to work with the pistol in an upright position. While there may be times when the ejector is too week to fully extract the round, does it really warrant an entirely new way of clearing a malfunction that the shooter may not remember in a high stress situation. What if he’s lying in a ditch, and not able to manipulate the pistol in this manner?

Unfortunately, a lot of these techniques are just gimmicks, if you ask me, and some are just downright fraudulent. I once brought my team to train with a man who claimed to have 40 years of tactical shooting experience, and after spending one day with him, I realized everything he taught was carefully crafted to look and sound great while realistically providing no tactical advantage, with some of the drills actually being dangerous in a real world situation. This illustrates the need for the buyer to beware when investing their hard-earned money in training with a professional instructor. 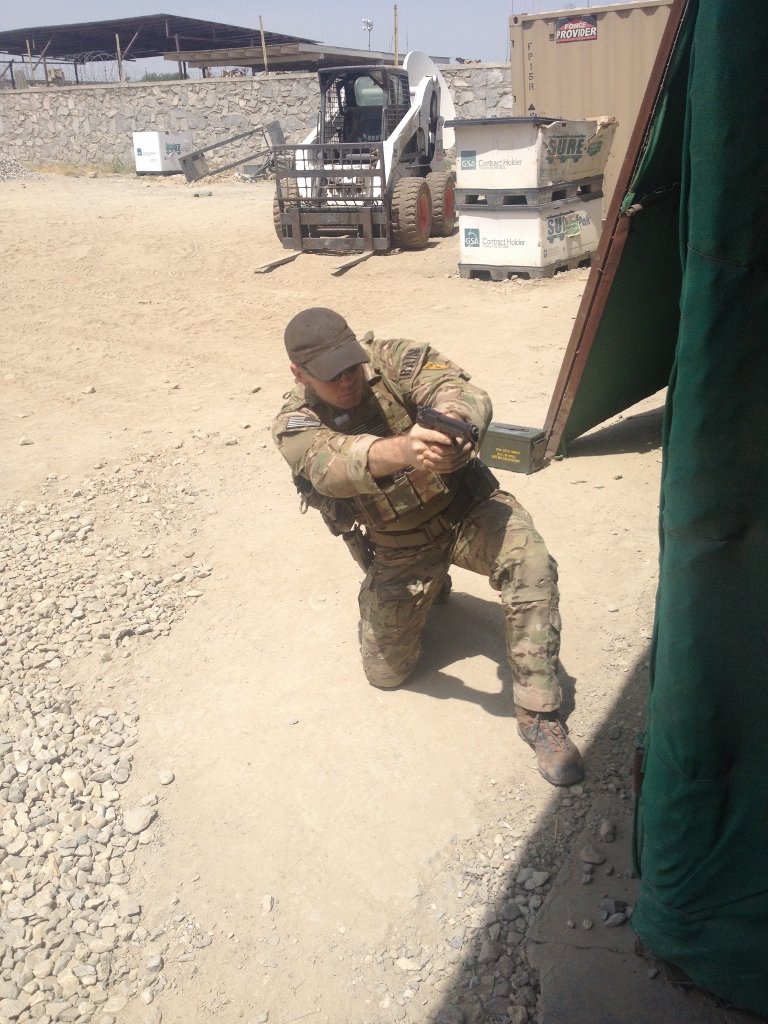 In my shooting courses, I take a different approach to the shooting discipline. I believe that focusing on perfecting the basics is the best way to become a proficient gunslinger. During my years in Special Operations we stressed the 8 Fundamentals of Marksmanship:

Of these eight fundamentals, there are four that must be accomplished every single shot in order to be truly proficient with a firearm. These four basics are: sight picture, sight alignment, trigger squeeze and follow through. If these four fundamentals are not focused on in every shooting drill and every training session, the shooter will never progress past the novice level. We may find ourselves in any number of crazy body positions during a gun fight or shooting competition but we can always accomplish these four things, no matter the position we may be shooting from. If a string of fire includes a great deal of crazy moves and actions that only the creator of the moves can consistently perform, then it will not help the average shooter while he or she is trying to perfect their newfound pastime. By concentrating on and perfecting the basics, however, the shooter is able to tailor his shooting style to his own body type. Everyone has a favored leg to take a knee on, or direction they prefer to turn. If we box a shooter in to a prescribed method, they may never reach their true potential. While instructing students, I run drill after drill where the student will concentrate on the 8 fundamentals of marksmanship for each round fired until they become self-aware of what they are doing during each and every phase of the firing sequence. 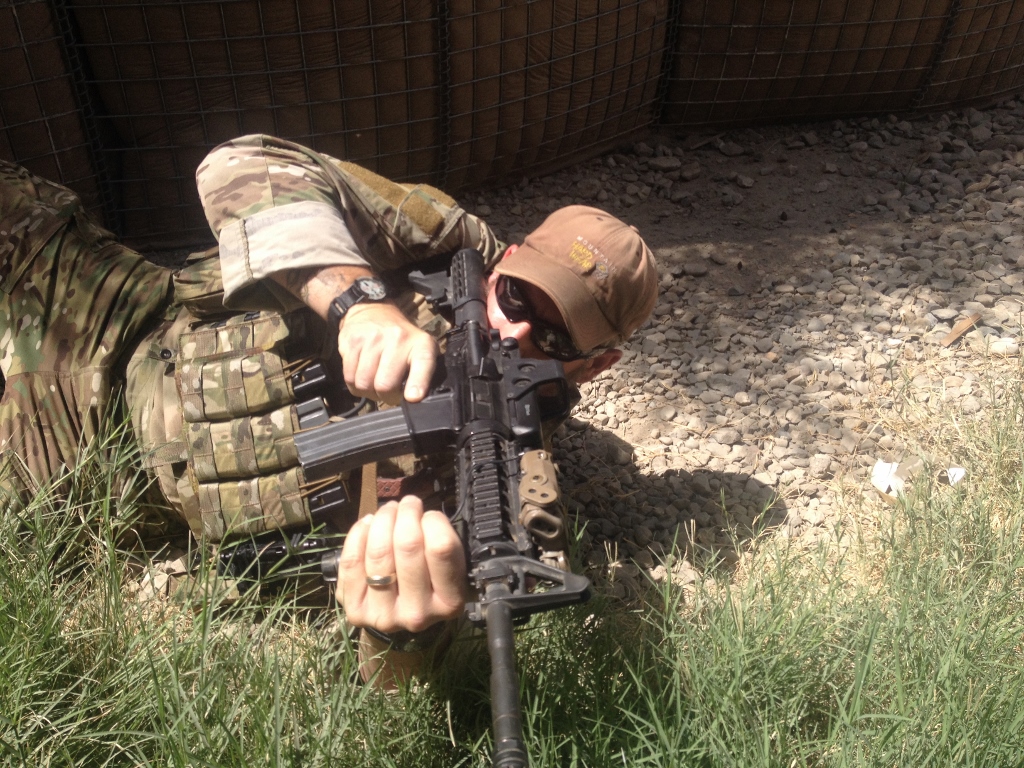 Many shooting instructors preach the 1-4 position when drawing from a holster. Position One is strong hand on the heal of the pistol gaining a good grip on the gun and the weak or support hand anchoring in the center of the torso near the belly. Position Two is the gun barrel clearing the holster and leveled horizontally toward the target. Position Three puts the gun in the center line of the body with both hands gripping the pistol near eye level. Position Four is the full weapon presentation, with the slack or take-up removed from the trigger. While this is a great draw process, it doesn’t work if the shooter is wearing his pistol on his chest suspended on his plate carrier or body armor. This is where the 8 fundamentals come in. You can wear your gun in any configuration and still utilize the 8 fundamentals while training. I tend to stay away from specific TTPs or SOPs, because each unit, and sometimes each shooter, has their own configuration they prefer. No matter the weapon you’re holding, the 8 Fundamentals of Marksmanship can be applied. When a shooter has to transition from an empty long gun to his sidearm, the same 8 fundamentals apply as they did when shooting the carbine. 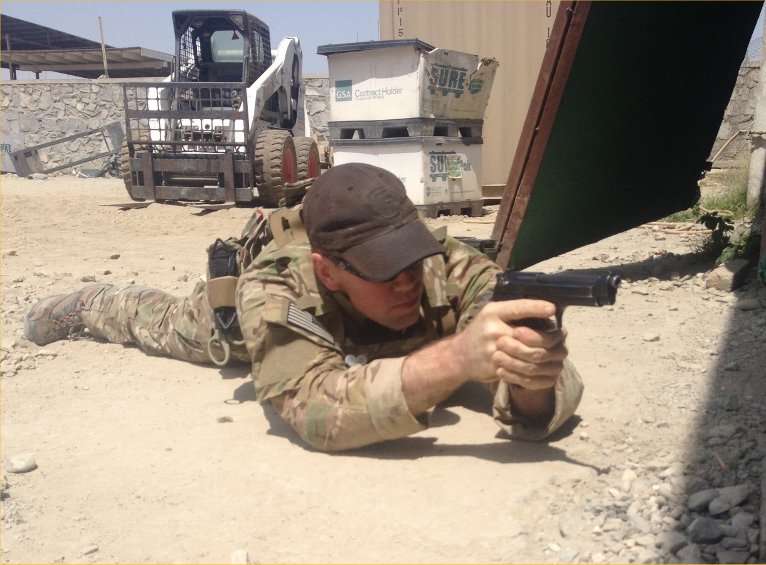 For me, results are the only thing that matter. In a gunfight, the one who can accurately place rounds on target the fastest is the winner. That being said, if your training in not getting you to that point, you need to change your training. I believe the best technique is the one that works the best for the individual shooter. I prefer to watch a student’s body mechanics, assess their weakness’ and offer suggestions that will work naturally with their shooting style. I personally utilize a variation on the Position 1 – 4 draw stoke. At position One, I place my strong hand on the pistol, picking up a good solid grip and moving my support hand over toward my right hip just above the hip bone (I am a right handed shooter). Once the gun clears the holster at Position Two, I gain purchase on the gun to the right of my body’s center line. As I’m completing my grip, I move in an arch from Position Two to Position Four, skipping right past Position Three.

Some will say that Position Three is essential while moving from one position to another in a house or something like that. Well, if I’m moving through a house around corners or something, I’ll draw my pistol back to Position Three. That doesn’t mean I have to use that position during the draw cycle. Why do I choose to draw my pistol this way? Because I’ve run drill after drill on a pro-timer and found that it’s faster for me to draw this way. If it weren’t, I wouldn’t use it. I’m severely left-eye dominant and shoot right handed. When I draw, I turn my head toward my right shoulder in order to block my right eyes view of my target with the bridge of my nose so I don’t have blurred vision. I always shoot with both eyes open so I don’t lose peripheral vision, but I need to block the direct line of sight from my right eye to the target in order to do so. By placing my support hand across my body near my right hip bone as discussed above, it helps me remember to turn my head to the right as I gain purchase of the gun. The point I’m trying to make here is that every shooter has subtle differences that need to be exploited in order to reach full potential. 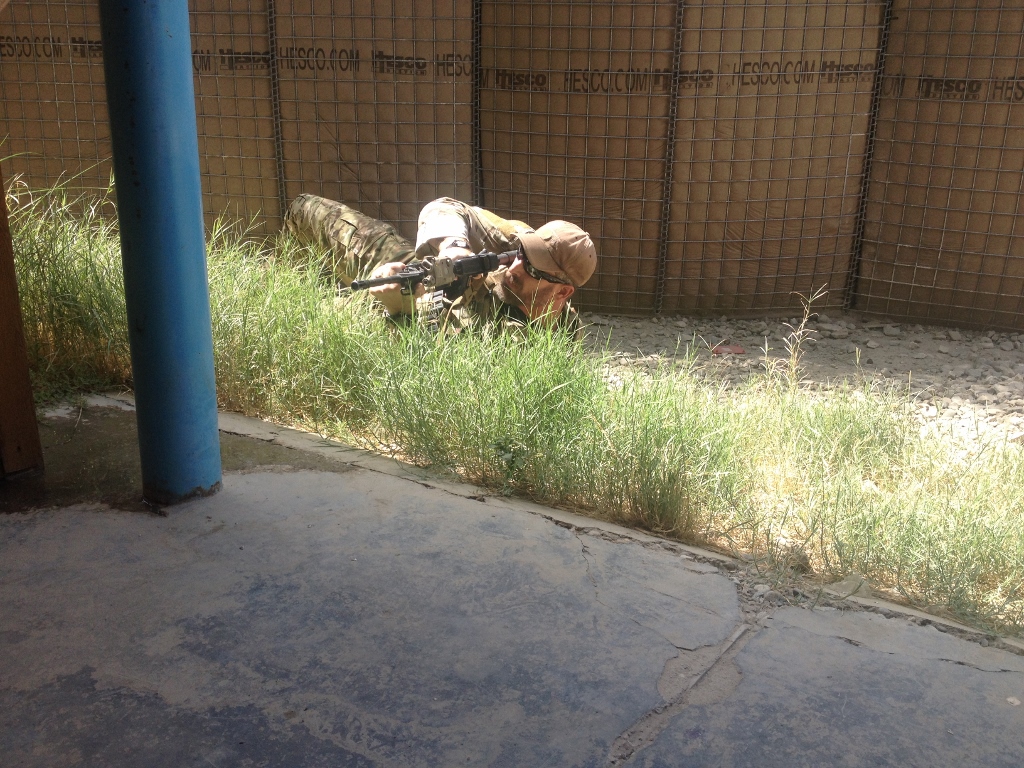 I once worked with Jerry Barnhart, and was blown away with his style of shooting. While Jerry’s a world class shooter, what impressed me the most about him were his bio-mechanics on the range. As I watched him running through drills during the first part of our training with him, I couldn’t put my finger on what it was about his movements that was so odd-looking. After a bit of time studying him running up and down the range and ducking under barriers and such, I realized that “The Burner” had found a way to remove almost every superfluous (that means unnecessary, or nonessential) movement in order to shave time off his shooting. Whether it was running from one shooting box to another, or transitioning from M4 to Pistol, he appeared robotic in his movements. He worked hard to make his movement so precise and fast that he actually changed the way the human body moves in order to do it!

I do not speak for Jerry, but I believe a man who has spent so much time removing unwanted and unnecessary movement from his actions would laugh at some of these practices being pushed by so many shooting instructors. In the end, getting back to the basics is something we all need to do from time to time and as instructors in the deadly business of gunslinging. We owe our students honest and truthful instruction that is founded in hard science, not movie stunts. I don’t intend to cast dispersions on the thousands of honest and dedicated instructors in our community,, but I think we could all benefit from getting back to the basics and concentrating on the fundamentals. 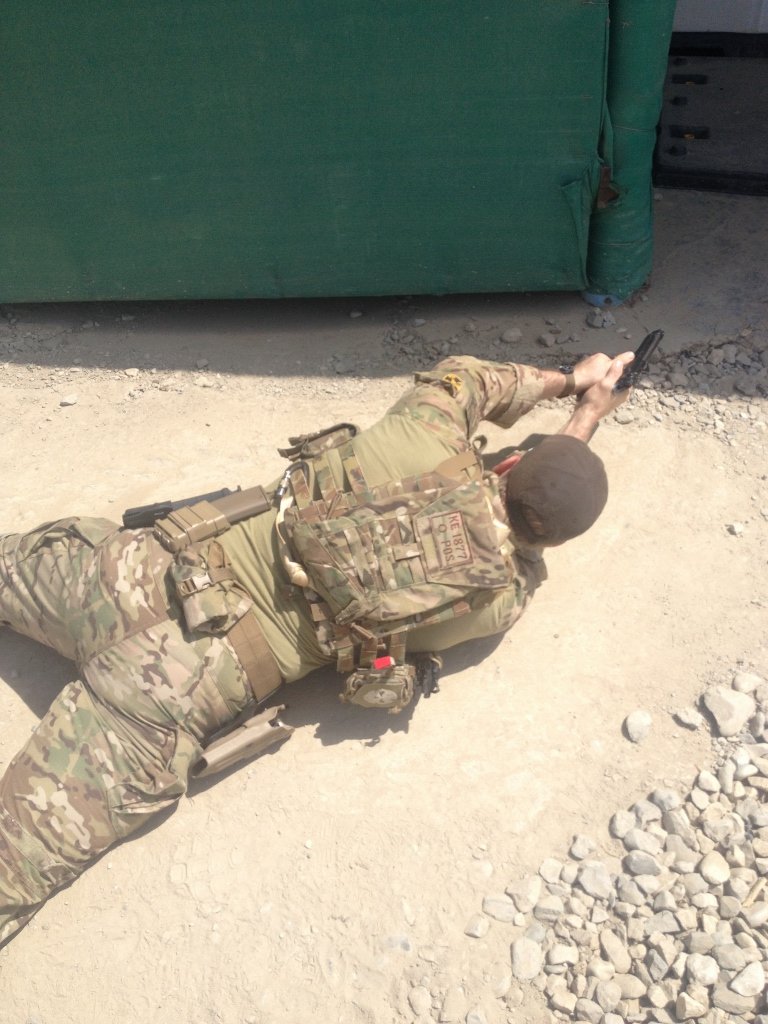 About the Author:
Jason Borges served in the US Army for more than 24 years (active duty service), most of which was spent in US Army Special Forces.

© Copyright 2014 DefenseReview.com and Jason Borges. All rights reserved. This material may not be published, broadcast, rewritten or redistributed without receiving permission and providing proper credit and appropriate links.

Getting Back to Basics: Combat/Tactical Shooting and Gunfighting with Pistol, Carbine/SBR and Shotgun! by David Crane

David Crane started publishing online in 2001. Since that time, governments, military organizations, Special Operators (i.e. professional trigger pullers), agencies, and civilian tactical shooters the world over have come to depend on Defense Review as the authoritative source of news and information on "the latest and greatest" in the field of military defense and tactical technology and hardware, including tactical firearms, ammunition, equipment, gear, and training.
Previous SIG SAUER SIGTac SB15 Pistol Stabilizing Brace for One-Handed Firing of Tactical AR-15 Pistols
Next Russian Low-Observable/Stealth Intercontinental Ballistic Missiles (and Possibly Anti-Ship Cruise Missiles?) Under Development: What it Means for Future Warfare and Geopolitics