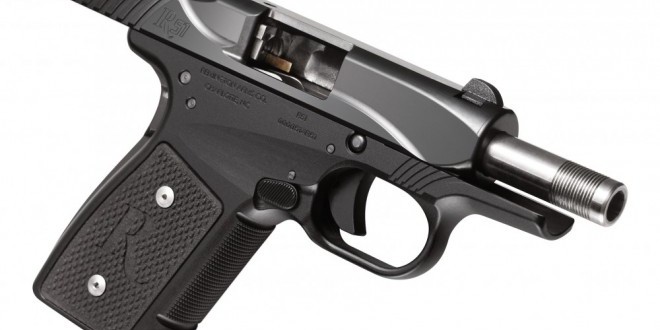 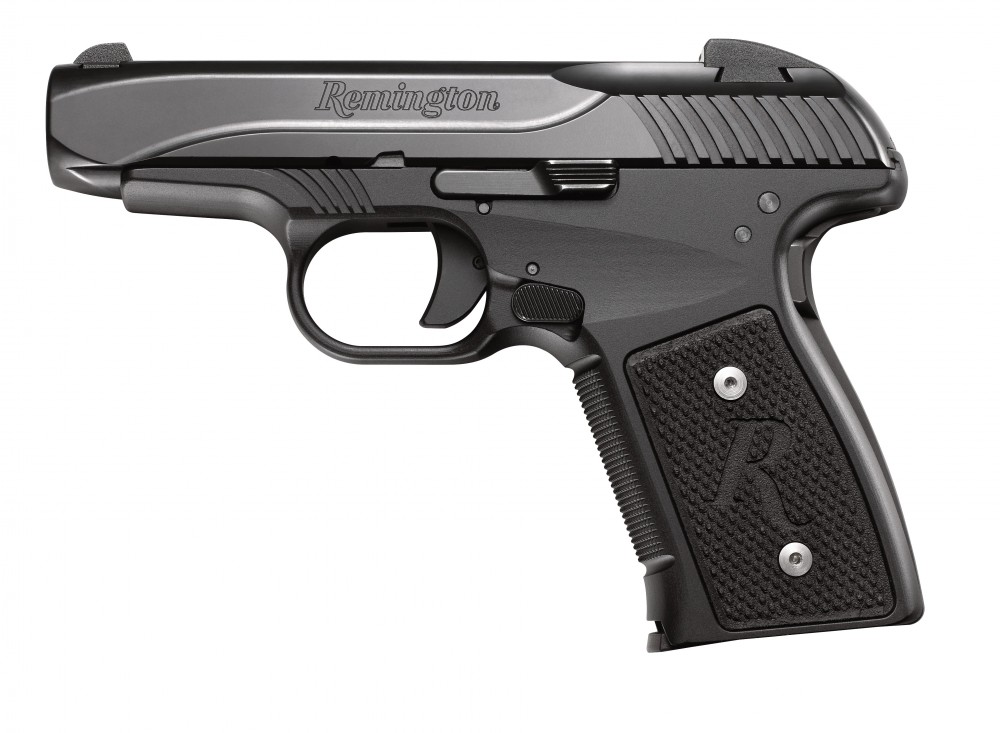 Remington Arms will be introducing the new Remington R-51 sub-compact 9mm semi-auto pistol with polymer frame at SHOT Show 2014 to what's sure to be an at least decent amount of interest. While Phil White of The Firearm Blog (TFB) has the the scoop and an initial hands-on review of it during a recent range session, DefenseReview (DR) has some initial thoughts on the new pistol based on the photos and his write-up.

First, while the pistol's Pedersen action (delayed-blowback, locked-breech-type lockup) method of operation is interesting, we're not sold on it with regard to reliability, so the R-51 pistol will have to prove itself under high round count and adverse conditions over time. That said, it's a good looking, sleek little pistol that's reminiscent of the the Lyttleton Engineering Works (LIW) / Denel Land Systems Vektor СР1 9mm sub-compact pistol in appearance, one of which, full disclosure, DefenseReview (DR) used to own. It's likewise reminiscent appearance-wise of the SIG Sauer P232 (formerly the SIG P230) .380 ACP pistol.

DR likes the design of the oversized ambidextrous mag-release button, provided it doesn't result in inadvertent engagement and mag drops. The slide stop/release also looks well-designed and easy to operate. We also like all the rounded corners and overall smooth lines of the gun for snag-free carrying, drawing and handling. Even the sights are rounded off, with the front of the rear sight remaining flat for one-handed racking, we presume. The R-51 looks very comfortable to carry concealed in a well-designed CCW holster.

The fact that the R-51 is (reportedly) rated for 9mm+P ammo, and can hold/carry 7+1 rounds of it is a big plus, since it not only makes the gun more versatile, but also provides extra strength, durability and peace of mind when firing standard-pressure/velocity 9mm ammo. If it can (allegedly) handle a steady diet of +P, it should prove very durable with standard ammo. 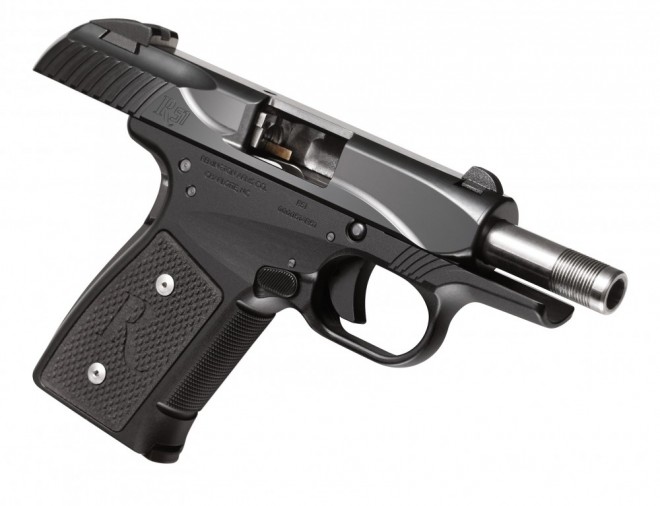 While DR isn't a big fan of 1911-type grip safeties on gripframe backstraps in general, and would much prefer a HK P7 M8/M13-type sqeeze-cocker safety on the frontstrap for superior ergonimics/usernomics and more reliable activation, we do like the 1911-style sliding single-action-only trigger for experienced, well-TRAINED shooters/operators who practice proper weapons handling (finger outside the trigger guard until you're ready to shoot) and muzzle discipline. So, we can tolerate a rear-grip-situated grip safety, provided it can be easily and consistently positively engaged by any/all hand shapes and with a high grip/hold where the web of the hand between the thumb and forefinger (index finger) is jammed right up against the grip tang, including with a two-hand isosceles grip. In other words, it has to engage (disengaging the internal safety) EVERY TIME, WITHOUT FAIL.

The Firearm Blog describes the trigger action as "really very good" with "the same feel as a 1911" with a straight-back sliding movement and a short reset for fast follow-up shots, so that's good. The sliding single-action trigger, combined with the R-51's fixed barrel, should aid in achieving excellent accuracy at combat distance, at least out to 25 yards, possibly farther.

During his range session, White witnessed eight shooters firing thousands of rounds (8-10 cases of ammo) for roundnose (ball) and hollowpoint ammo with only one malfunction (failure to feed), and only one R-51 pistol prototype out of eight or more guns biting the dust/going tits-up, which is pretty good for a bunch of prototype pistols.

White's already "sold on the R-51", but since we weren't there ourselves to run it, Defense Review will reserve judgment until we get some range time with it. Even then, until we can run at least a few thousand rounds through it (preferably under some realistic adverse environment conditions), or read another trusted source's high-round-count/adverse conditions testing, we just can't know. Regardless, we enjoyed White's write-up at TFB.

Defense Review doesn't yet know why Remington opted for an internal-hammer design rather than a striker design for the R51's firing mechanism, so we'll ask them. Perhaps they opted for the internal hammer design instead of a striker in order to achieve the relatively-long 3.4" barrel length for additional velocity and sight radius?

In any case, the R-51 will reportedly begin shipping on February 1, 2014. In the meantime, we look forward to handling it at SHOT. DR sincerely hopes the Remington R-51 helps to finally light a fire under Glock's butt to design and develop a slimline (narrow/slim slide and frame), single-stack 9mm compact/sub-compact pistol, since we think it would be a winner, and we're not all that enthused about the Glock 42 .380 ACP (9mm Kurtz) single-stack sub-compact pistol, since we don't really like .380's. How the S&W M&P9 Shield 9mm/.40 S&W sub-compact failed to already get those fires a'blazin', we're at a loss. Perhaps things are burning hot at Glock behind the scenes, and a Glock single-stack nine is right around the corner, on the heels of the Glock 42.

By the way, Fobus, Comp-Tac, Galco and CrossBreed all reportedly already making holsters for the R-51, which is an important aspect for potential end-users. The R-51 like it was specifically designed and developed for concealed carry, so consumers will need some good holsters to carry it.

And that's not ALL, Monty! AmmoLand just ran a Crimson Trace press release on new products for 2014, including a Crimson Trace Laserguard laser sight/aimer for the R-51. DR likes the idea of a laser sight on a CCW pistol, since not only can you light a bad guy up in the dark (with the laser), but the intimidation effect of it can actually help to de-escalate a situation and preclude you having to shoot your assaulter/attacker. Anything that can encourage the bad guy to back off (or kneel or lie face down on the ground) without you having to shoot him/her is a very good thing. Taking a life should be the absolute LAST resort, even a violent criminal’s, and a laser sight can sometimes assist you in avoiding having to shoot an aggressive individual intent on harming you. 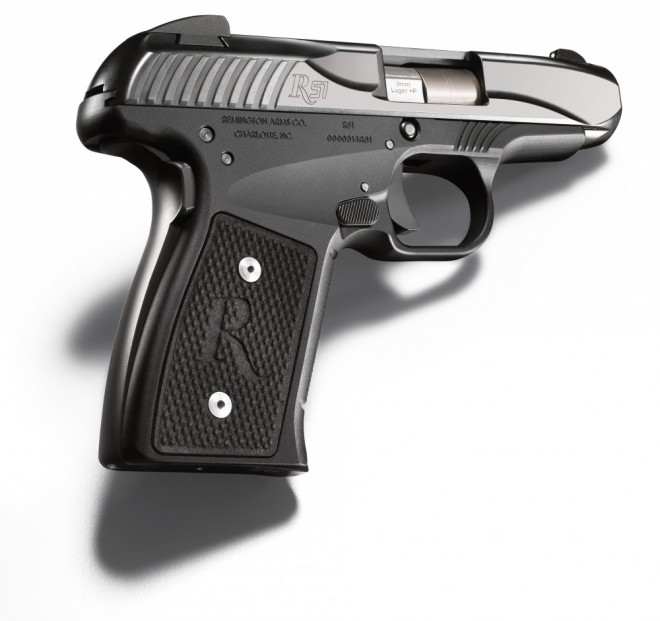 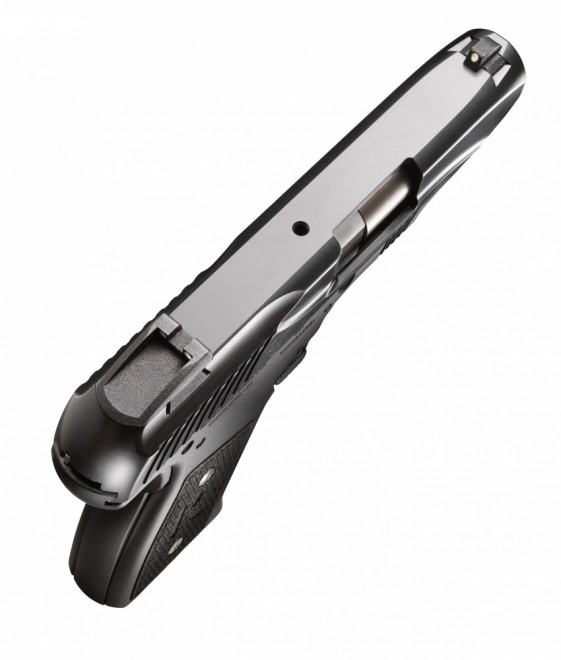