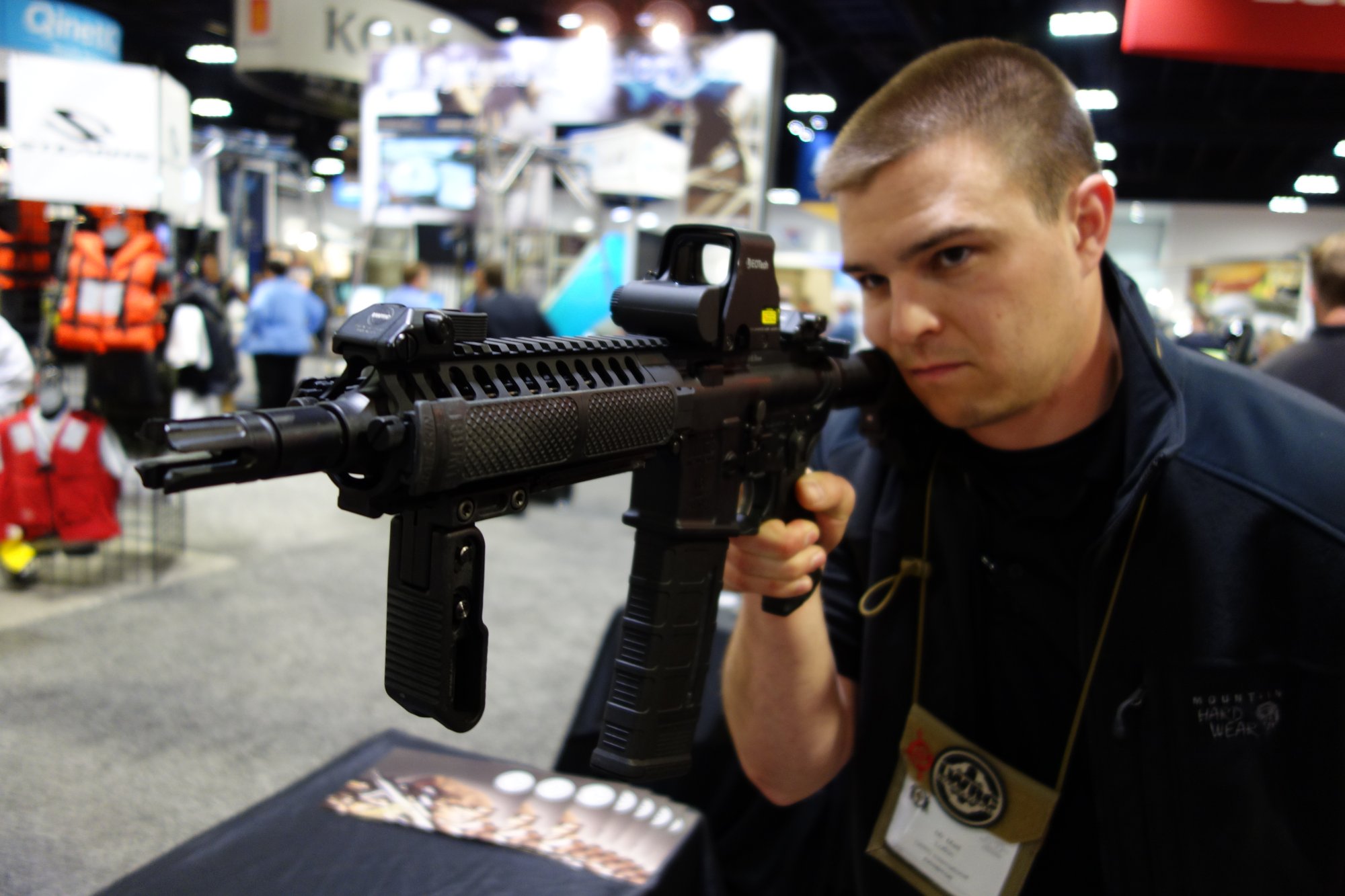 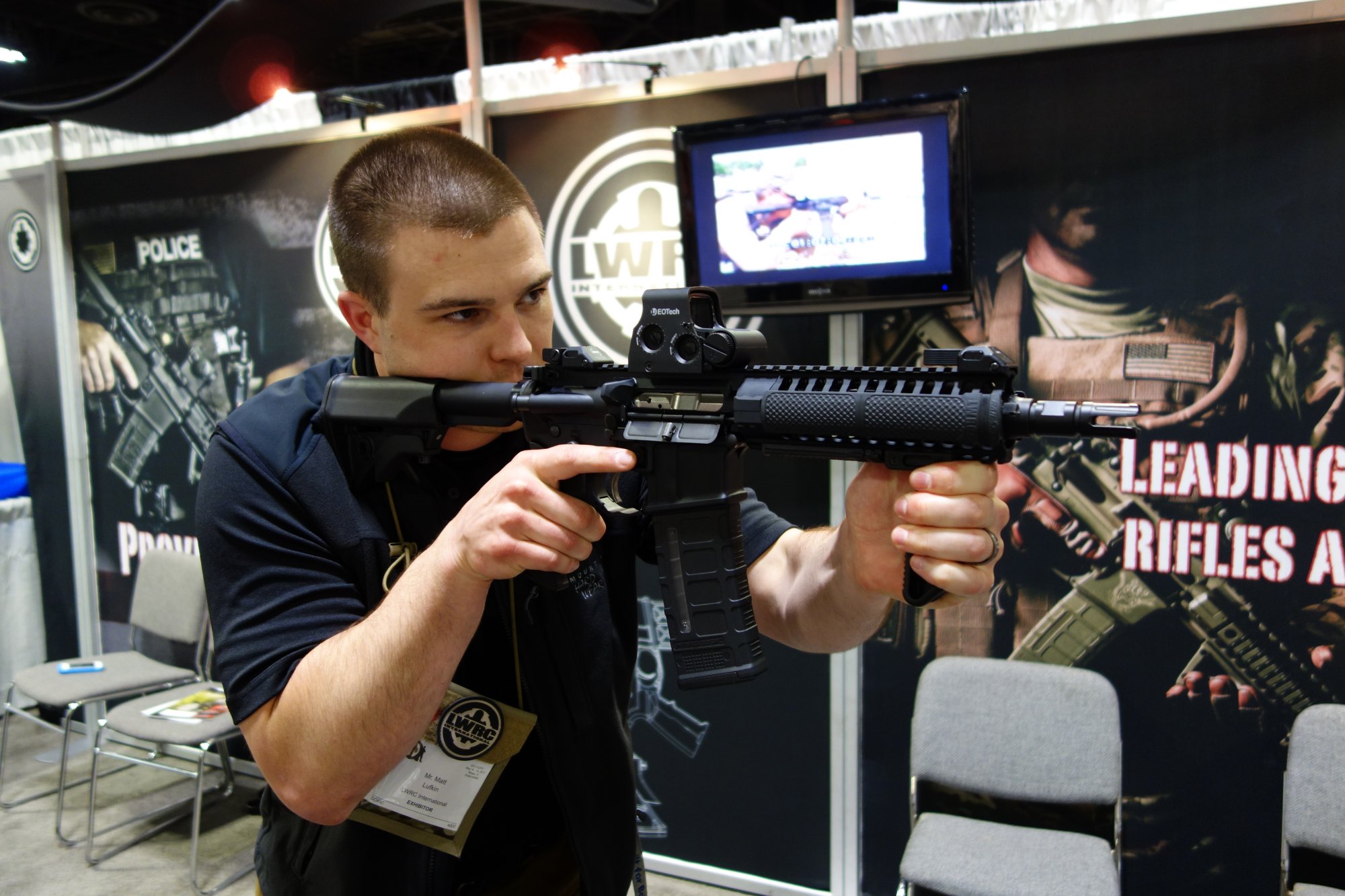 The LWRCI Six8 M6.8-UCIW SBR/PDW's full-ambi AR lower appears to be well-designed-and-developed, but DefenseReview (DR) has only viewed and handled it. We've never actually run one at the range or in the field under adverse conditions at high round count, nor do we know anyone else that has, so we can't yet endorse it for military combat, Armageddon, or the Zombie Apocalypse. It (LWRCI ambi lower) does look and feel good, though, and Defense Review is indeed a fan of ambi controls for dynamic CQB/CQC (Close Quarters Battle/Close Quarters Combat) gunfighting and force-on-force gunfighting training, including in low-light/no-light conditions, especially for lefties and those that have been trained to shoot ambidextrously and to switch the weapon to the left shoulder when going left around a corner, a la Dave Maynard/Combative Concepts. 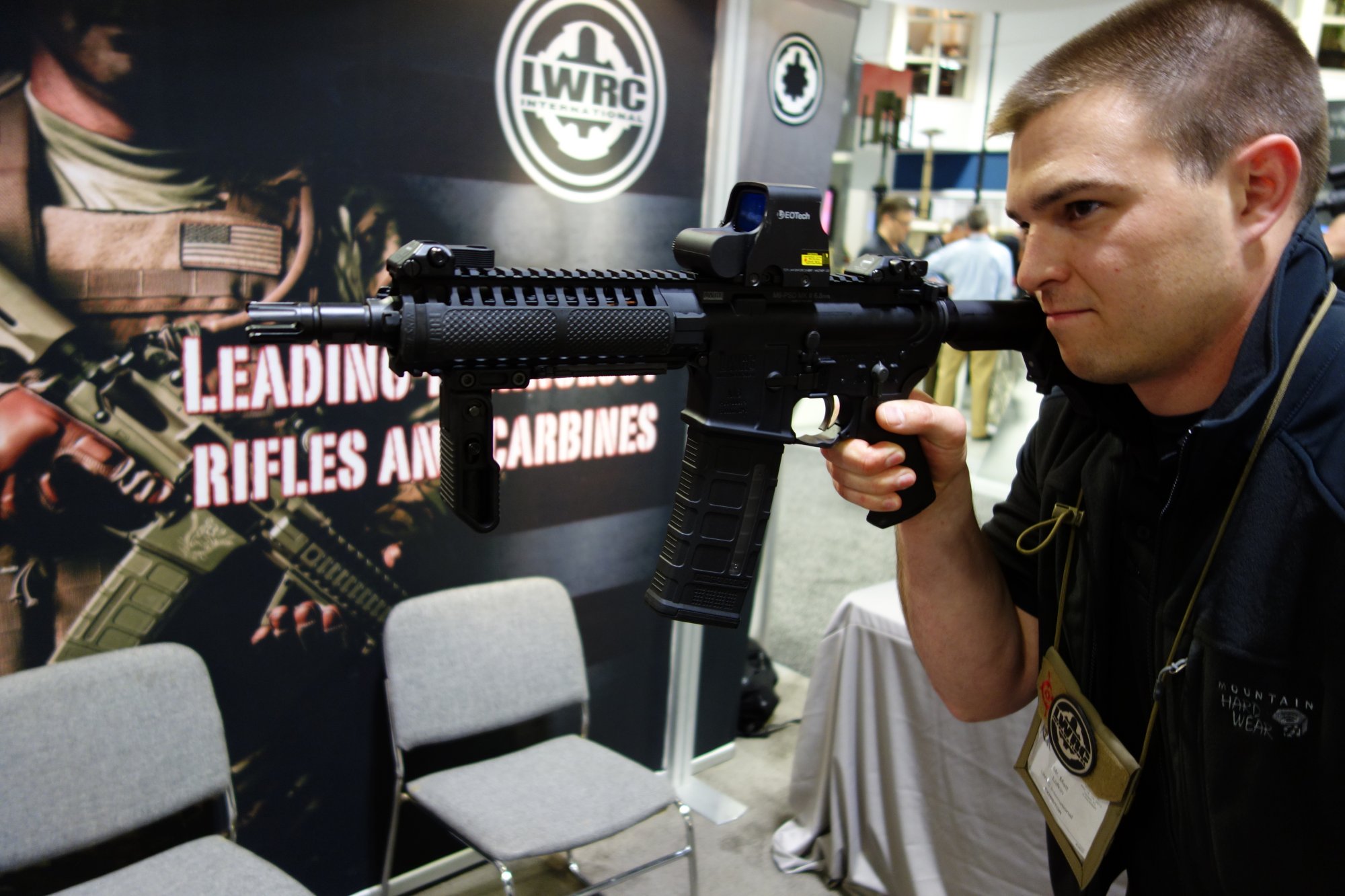 The LWRCI M6.8-UCIW SIX8 8..5" select-fire SBR/PDW was designed specifically around the ATK/Federal Speer Gold Dot 6.8 SPC 90-grain bonded soft-point XM68GD round (and vice versa), which achieves approximately 2,450 fps and sub-MOA accuracy out of the Six8's ultra-short 8.5-inch barrel. The Six8 will shoot under 4" at 400 yards, according to LWRCI representative Jeff Clemmer, which is impressive. The SIX8 utilizes a Magpul PMAG 6.8mm 30RD Maglevel-type windowed 30-round mag, which was also developed specifically for the M6.8-UCIW's magwell specs, and is therefore incompatible with MILSPEC AR-15/M4/M4A1 Carbine lower receivers. DR would be interested to see a Lancer L5 AWM (Advanced Warfighter Magazine) developed for the LWRCI SIX8 M6.8 weapons, since the Lancer AWM incorporates wraparound spring steel feed lips and is available in translucent versions. The Lancer L5 AWM is currently our favorite 30-round polymer AR mag, particulary the original dark/smoke translucent version. 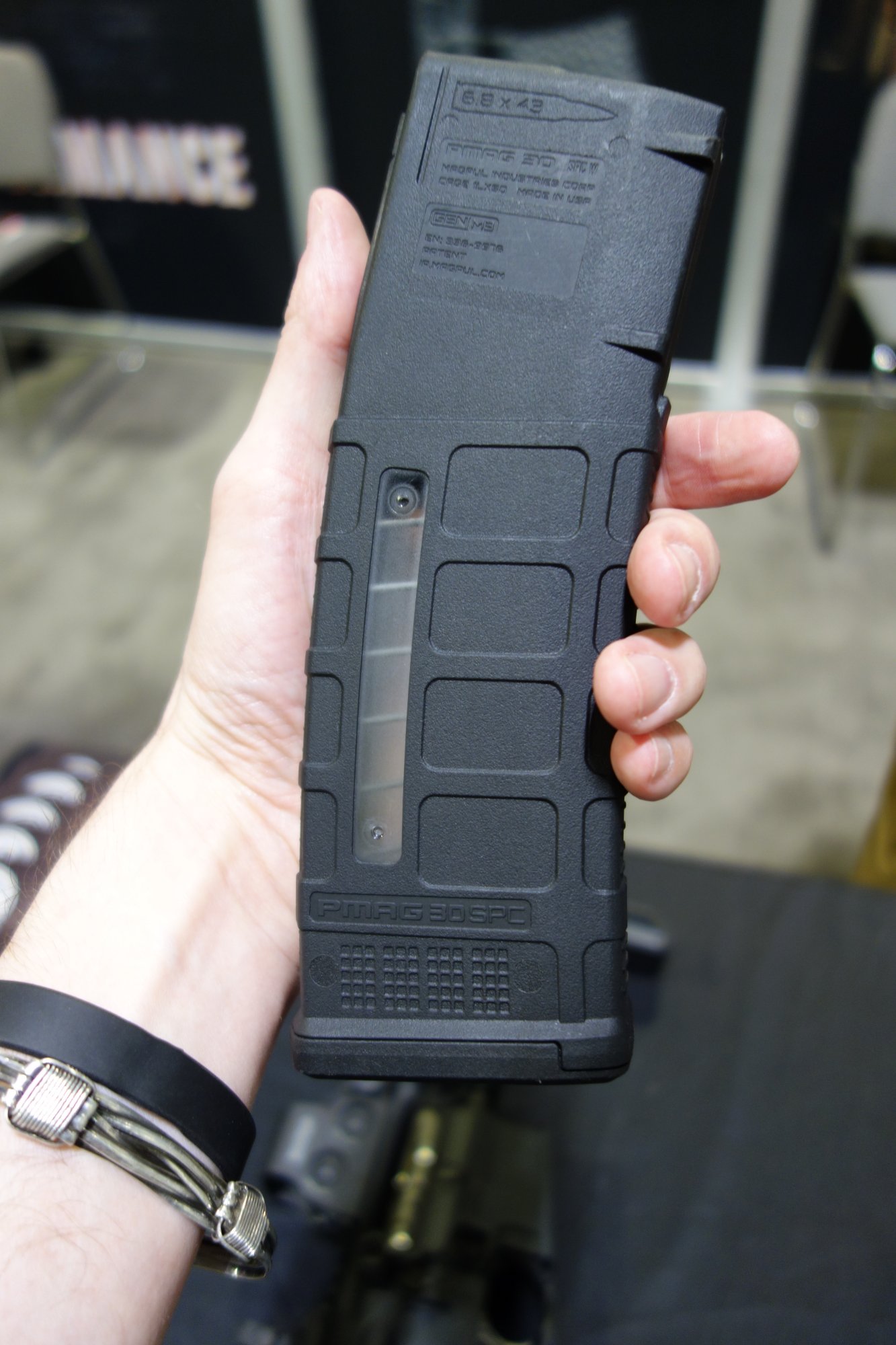 DR would very much like to run the Six8 at the range, at some point. After that, though, we'd like to run the civilian-legal semi-auto-only LWRCI SIX8 M6.8-A2 Carbine (14.7" or 16.1" barrel) and LWRCI M6-IC (M6 Individual Carbine) (14.7" or 16.1" barrel) 5.56mm side-by-side to see how they perform and feel during fast semi-auto shooting strings, suppressed and unsuppressed. We'd also like to test their respective accuracy and reliability, as well as their respective suppressed and unsuppressed sound signatures during both outdoor and indoor shooting.

If we could add one thing the to the LWRC SIX8 M6.8 UCIW, it would be a FERFRANS Specialties DSAS/RRS (Delayed Sear Activation System/Rate Reduction System) bolt carrier group (BCG) to bring the cyclic rate of fire (ROF) reliably and significantly below the 700-RPM threshold on full-auto. This component would make the weapon even more controllable, reliable and durable under full-auto at high round count, and reduce the chance of cook-off even further.

Even though the Six8 UCIW 6.8 SPC is doing pretty well, so far (recently landing a 40,000-unit contract with a "foreign customer", for example), DR would still like to see 300 AAC Blackout (300BLK) variants of the LWRCI M6 series weapons (with ambi lowers, of course) developed, especiallly a 300BLK UCIW SBR/PDW variant with the same 8.5" barrel as the Six8, along with a 12.5"-barreled version. The 300BLK round fits in standard MILSPEC USGI 5.56mm NATO 30-round AR mags, utilizes a starndard, MILSPEC AR-15/M4/M4A1 bolt, is softer-shooting than the 6.8 SPC, and was specifically designed and developed for suppressed AND unsuppressed fire with subsonic AND supersonic ammo. The 6.8 SPC may be able to nail the target at 500-650+ yards, depending on the ammo and weapon combo, but a 300BLK weapon can reach out and touch someone effectively at 400-450+ yards with the right loads, and that's still pretty good. PNW Arms is currently making some pretty badass 300BLK ammo, just for the record. By the way, as great the Gold Dot 90-grainer is supposed to be–and it's supposed to be pretty damn great in terms of accuracy AND terminal ballistics, indeed–when it comes to 6.8 SPC ammo, in general, we still like Silver State Armory (SSA), which makes not only great 6.8 SPC tactical ammo, but also some pretty terrific 5.56mm NATO (5.56x45mm NATO)/.223 ammo, as well. PNW Arms and Silver State Armory (SSA) are currently DR's two favorite smaller-sized ammo companies. 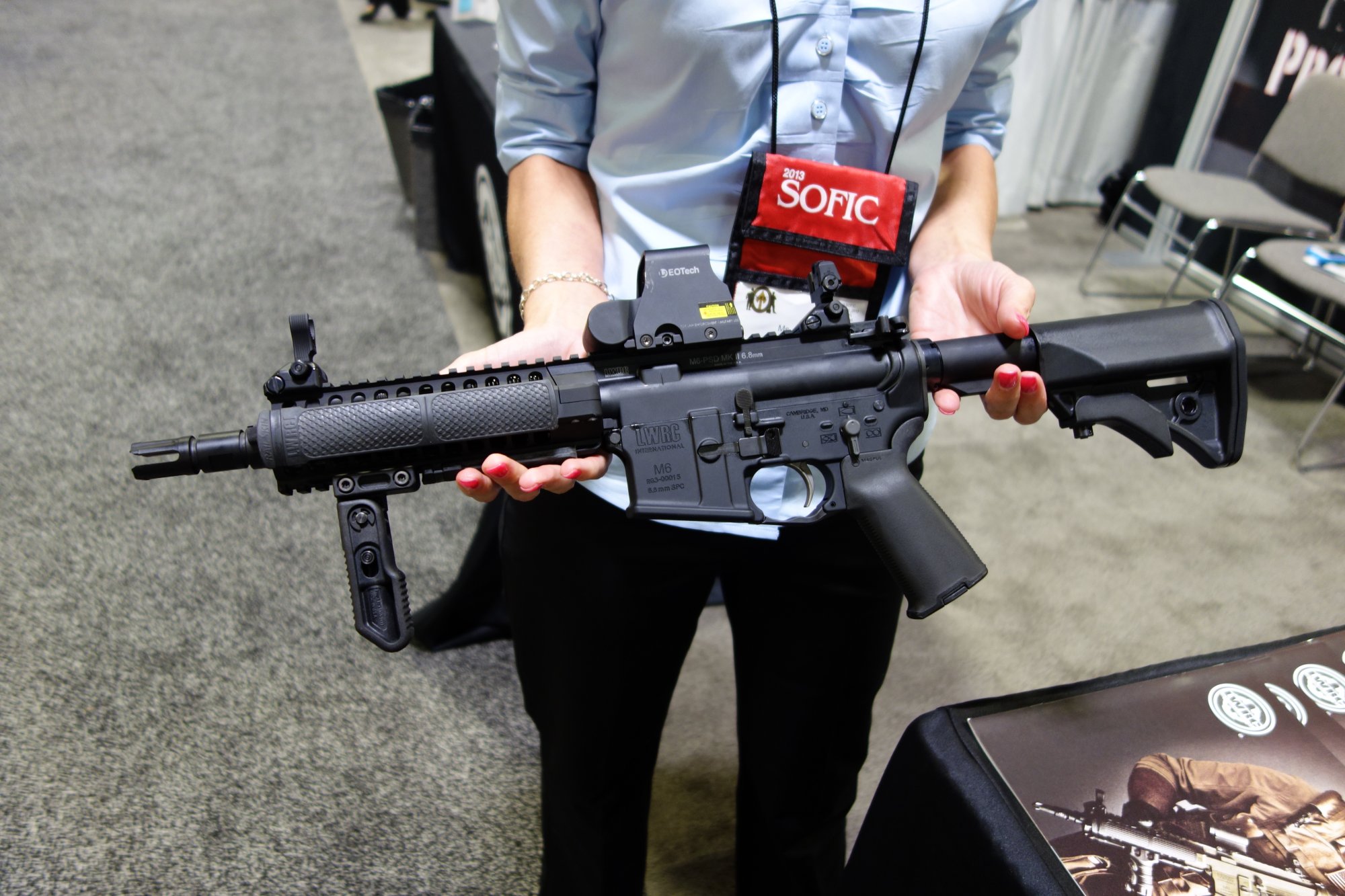 For the record, DR does enjoy short-stroke gas piston/op-rod guns like the Adams Arms (AA) and LWRCI weapons, although we also like direct-gas-impingement (DGI) AR's just as much, since both operating systems have their respective advantages and disadvantages. DR has written about this in the past. One nice (small) potential operational/tactical advantage a modern piston AR enjoys is the ability to come right out of the water shooting (i.e., immediately upon surfacing) without having to shake the water out of the barrel and action, which may be an advantage for maritime operations, includng "over-the-beach", VBSS (Visit, Board, Search and Seizure), and GOPLATS (Gas and Oil Platforms) ops.

That said, DefenseReview has never heard even one anecdotal account of a military SOF (Special Operations Forces) assaulter/operator having to fire his weapon immediately upon surfacing. Piston AR's may also enjoy a thermal management advantage over DGI AR's when running the gun on full-auto at high round count. The piston AR moves the heat build-up out front to the gas block and away from the bolt carrier group (BCG). This is not really a factor for semi-auto shooting, but may increase the time and number of rounds before cook-off in full-auto weapons, and increase the life of the full-auto BCG.

DGI AR's tend to be lighter in weight, softer and smoother-shooting (at a given weight), simpler than piston AR's, with less moving parts, and more accurate without have to resort to a thicker/heavier barrel profile. However, the latest piston ARs from Adams Arms and LWRCI are capable of sub-MOA groups, so the DGI AR's accuracy advantage may be going away. Since DGI ARs don't rely on proprietary piston/op-rod components that can be difficult to acquire/obtain in the field, they're perhaps the better choice from a MILSPEC/commonality-of-parts perspective.

As long as you're running at least a 12.5"-barrel, you can run a MILSPEC M4/M4A1 carbine-length gas tube in it, and it'll run like the wind unsuppressed. If you want to retain the option of running suppressed (reliably), DR recommends a Noveske Switchblock, MicroMOA "The Govnah", Syrac Ordnance or equivalent lo-pro/lo-vis (low-profile/low-visibility) adjustable gas block (AGB). Remember, the original (modern) piston AR, the HK416, was developed at the request of "The Unit" (Delta Force) for a specific barrel length and mission requirement. They wanted a reliable suppressed 10.3"-barreled SBR to match the overall length of the Crane NSWC-developed MK18 MOD 1/CQBR (Close Quarters Battle Receiver), which was experiencing reliability issues when switching back and forth between suppressed and usuppressed fire. Thus the HK416 was born.

The following information on the LWRCI SIX8 M6.8-UCIW comes directly from the LWRCI website: 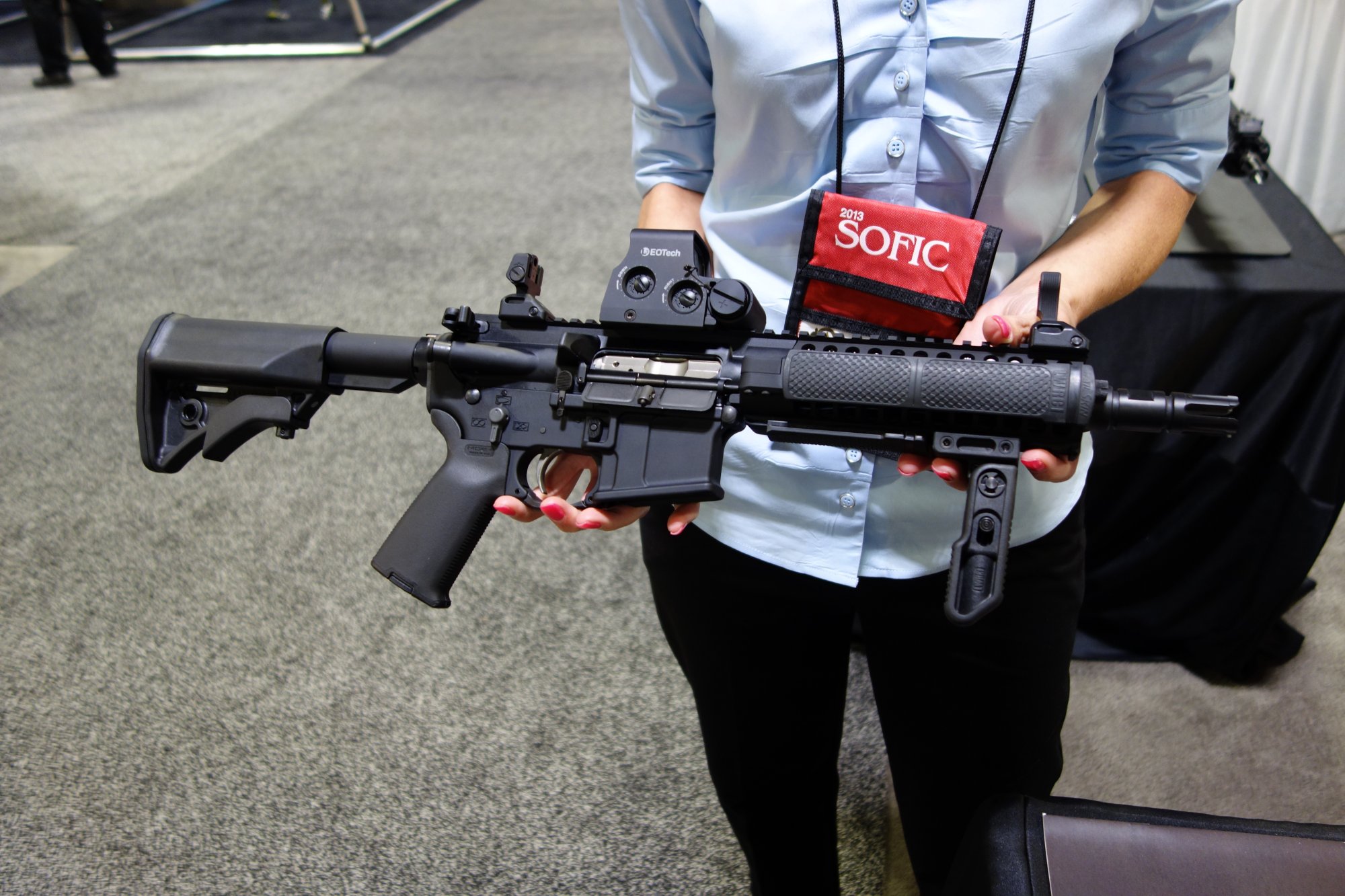 "The SIX8™ weapons are short-stroke, gas-piston operated rifles chambered in the 6.8x43mm SPC cartridge. This cartridge was developed as part of the Enhanced Rifle Cartridge Program in which U.S. Special Operations soldiers, as well as armorers and other technicians from the U.S. Army Marksmanship Unit, played a major role. Its primary purpose was to address the deficiencies in terminal performance seen with the 5.56x45mm NATO cartridge, while allowing the soldier to carry the same number of rounds with minimal weight penalty. It succeeds in doing so because it uses a heavier bullet with excellent accuracy, which delivers more energy across all effective ranges.

Until now, a major drawback of using the 6.8 cartridge in an M4 style weapon has been the lack of reliable magazines. So, when we designed the SIX8™ family of weapons, we started with the magazine. Partnering with Magpul®, the leader in polymer magazine engineering, we designed the first polymer 6.8 magazine. Building upon the magazine, we designed the SIX8™ platform for maximum reliability and improved ergonomics. The upper and lower receivers are designed to accommodate the slightly larger polymer magazine and to perfect the feed geometry for the 6.8 cartridge. In addition, we have prompted Federal Ammunition to develop new lines of affordably priced, high performance 6.8 ammunition for commercial, law enforcement and military applications.

As with the IC family, the weapons in the new SIX8™ family are fully ambidextrous and equally suited to right- or left-handed operators. The SIX8™ rifles are based on the familiar Stoner M4/AR15/M16 architecture, but they have been optimized specifically for use with the 6.8 cartridge.

The new SIX8™ family combines the ultimate in ergonomic user-friendly rifles with the outstanding mid-range 6.8 cartridge.