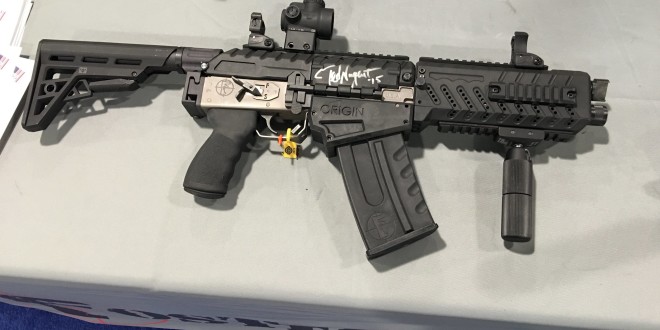 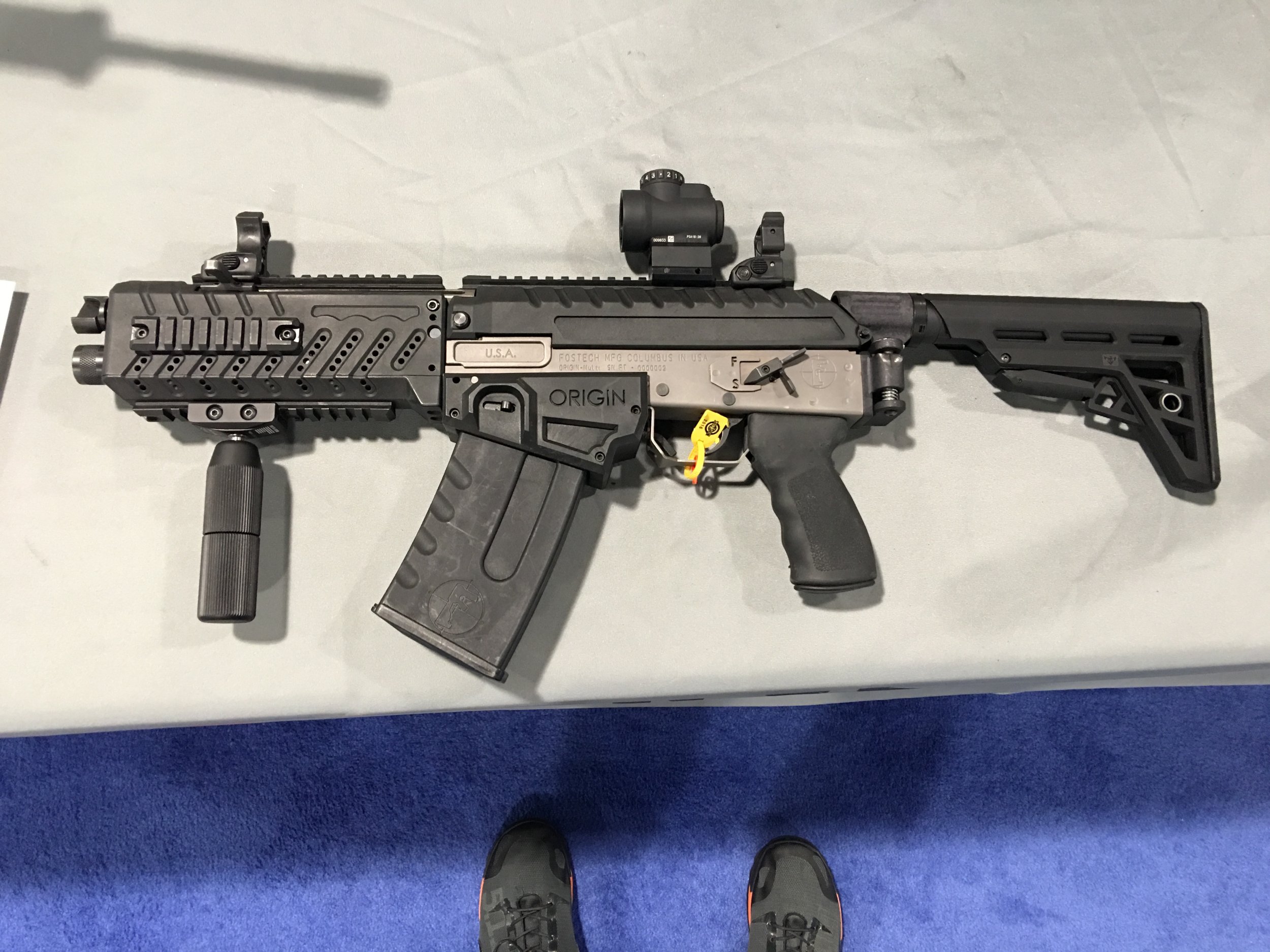 Every once in awhile, DefenseReview (DR) comes across something that really interests and excites us. The Fostech Origin-12 Shotgun, a mag-fed semi-auto 12-gauge combat/tactical shotgun by Fostech Outdoors, is just one of those things. DR really likes the design and visual aethetic of the gun, so we really hope it actually works as advertised, and proves reliable, durable and accurate under adverse conditions. If so, this is the most interesting and exciting mag-fed shotgun we’ve seen since the RAAC Akdal MKA 1919 Shotgun “Super-Tuned” by Firebird Precision, and the Auto Assult-12 (AA-12, also written AA12) Shotgun. a full-auto 12-gauge shotgun that utilizes Jim Sullivan’s (L. James Sullivan) Constant-Recoil principle, which Sullivan invented for Ultimax 100 LMG/SAW (Light Machine Gun/Squad Automatic Weapon), to control to attenuate felt-recoil and muzzle rise, thereby enhancing/increasing weapon control and accuracy during full-auto fire. Both the AA-12 and Ultimax are very-long-stroke open-bolt full-auto guns, whereas the Origin-12 is a closed-bolt semi-auto firearm. So, we don’t think it can utilize Constant Recoil…but we’ll try to find out, and update this article accordingly.

Anyway, the Fostech Origin-12 Shotgun sports some seamingly well-designed, ergonomic controls on the lower receiver, with a mag-release (magazine release) lever placed forward inside the trigger guard, and a large/oversized BCG (Bolt Carrier Group)-release button/lever the right side of the reciever, as well as an ambi (ambidextrous) safety/selector switch. The lower receiver’s magwell is nice and wide for fast, easy direct magazine insertion, and the BCG holds open after the last round is fired, aiding fast magazine changes. When you need to do a mag change, it’s straight-in, straight-out, not rock and lock. But how many rounds do you get. Again, Fostech delivers, offering proprietary 5, 8 and 10-round box magazines, and 20 and 30-round drum mags. Pretty great. The upper receiver sports a very large ejection port to aid ejection and enhance reliability. 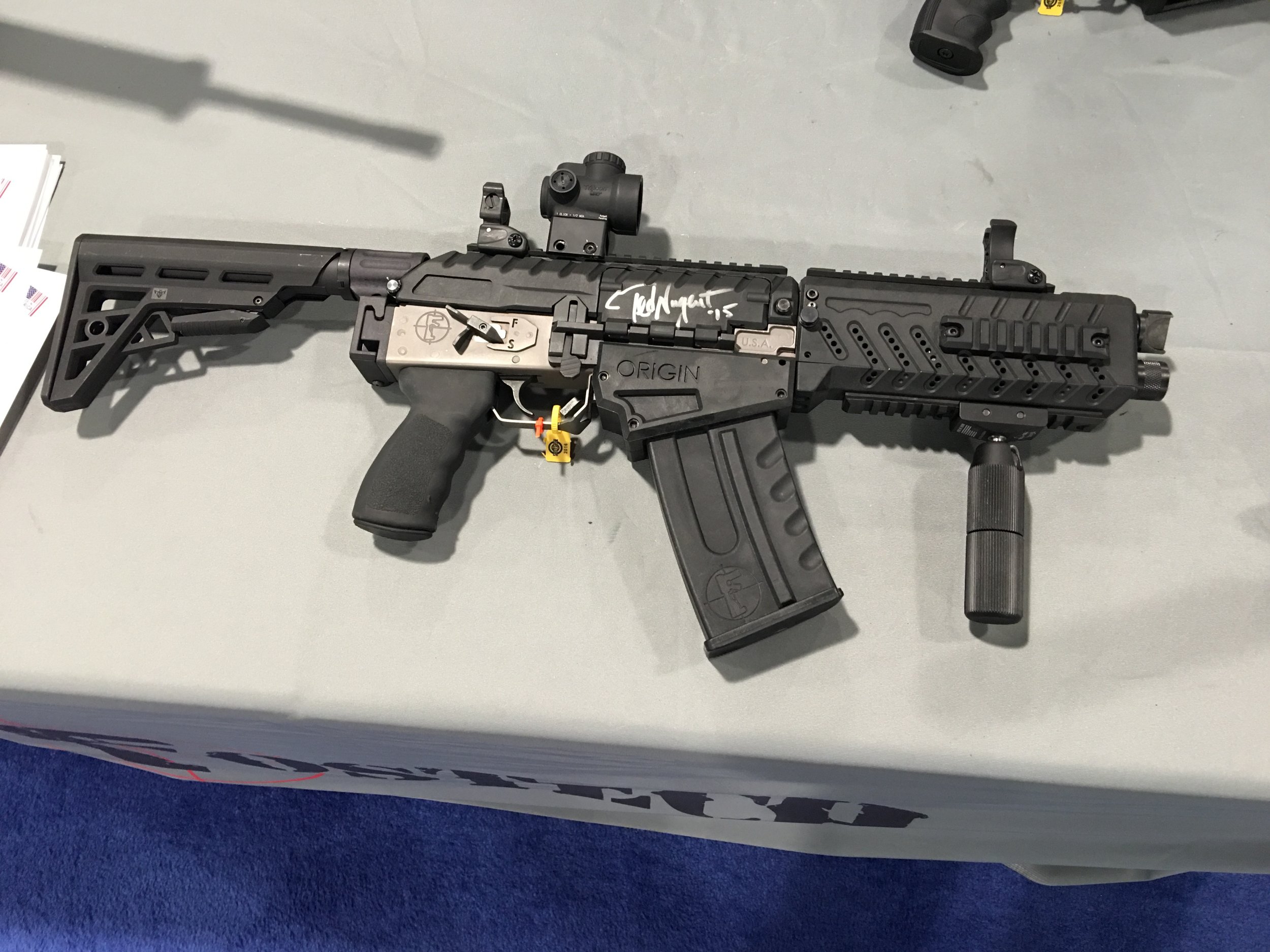 12-gauge shotguns are known to recoil a bit, so to help control muzzle rise, the Origin-12 Shotgun’s design places the barrel below the chamber and buttstock. “In-line shotguns, when you shoot them, they climb. Pure physics will tell you about this firearm [Origin-12]. When you shoot it, it takes recoil out of it, and it punches you on target,” says Fostech Outdoors executive Judd Foster. Mr. Foster was kind enough to take DR through the gun recently at The Range 702 evening event during SHOT Show 2016 (see first/top video below).

Another Fostech Origin-12 Shotgun design feature we like is the seeming robustness/ruggedness of the operating mechanism, including the large left-side-mounted non-reciprocating charging handle and large-knob adjustable gas block a.ka. “infinite” gas system. The lightened/skeletonized BCG and piston/op-rod (operating rod) look like they were designed specifically for hard use. “The thing that makes this gun truly unique is the gas system. That’s the patented part of the gun, it’s the lifeblood of the gun. What it does, it picks up the gas as soon as it leaves the chamber, with two quarter inch tubes, translates it forward, so it’s a very efficient gun. So, the Achilles heal of the box-fed shotguns of the past, we’ve taken care of. It’ll shoot the light loads, straight out of the box,” says (Judd) Foster. The Origin-12’s adjustable gas block should allow for reliable suppressed fire with silencer/sound suppressors like the Silencerco Salvo 12. 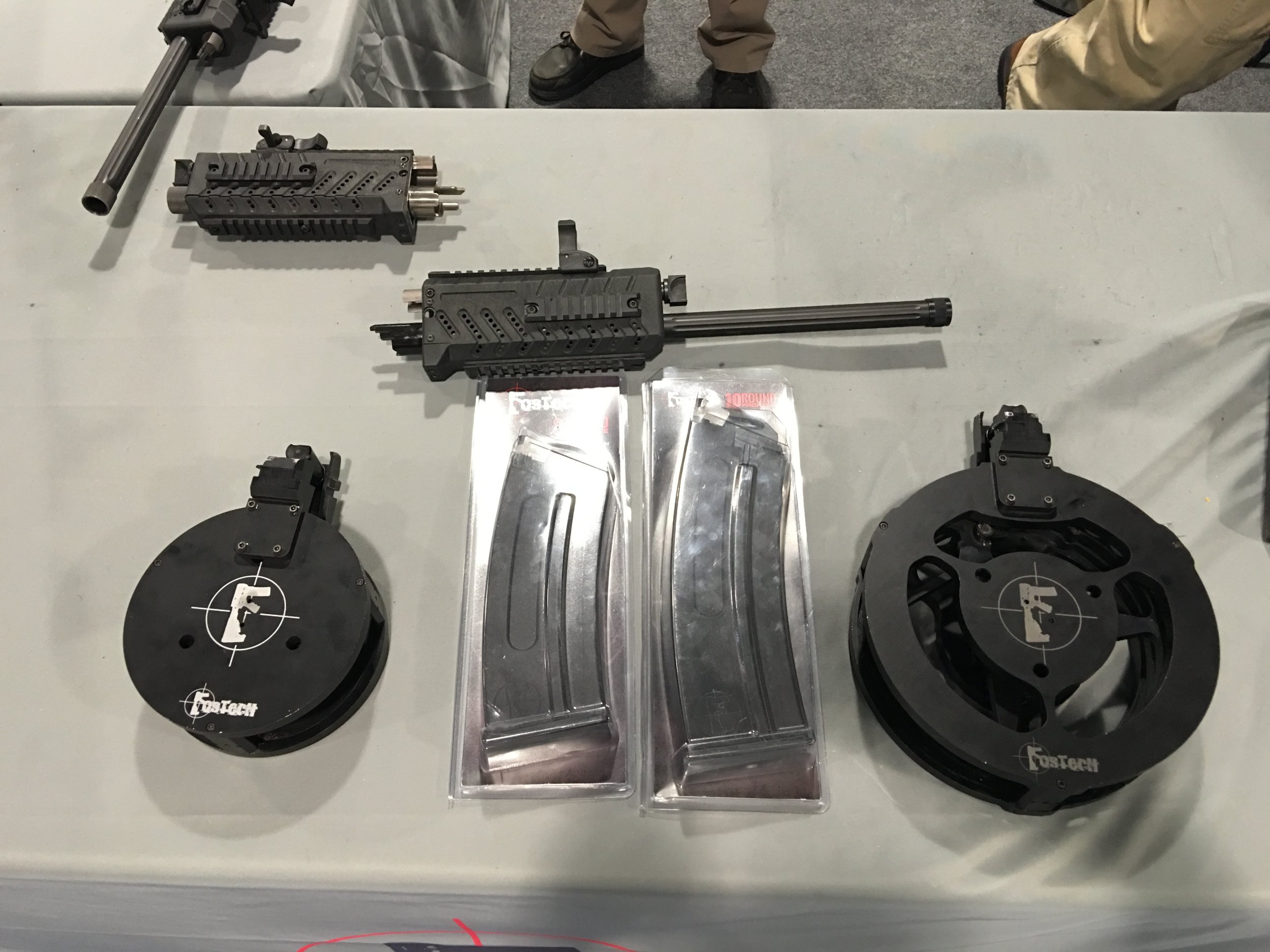 Frankly, it would appear that every component of the operating system is big and strong, including the action/recoil spring. Nothing looks delicate on or inside this gun. The QCB (Quick-Change Barrel) and takedown aspects also look well-designed, and you have to watch the embedded videos below to really appreciate them, and understand just how interestingly the gun is designed overall. Just pull the large pin out, and the gun breaks right down for changing barrels or popping the gun into a backpack or briefcase. Easy peasy.

AND, you also get a nice folding stock (which we hope is also telescoping/retractable) and Diamondhead USA flip-up front and rear BUIS (Back Up Iron Sights).

Oh, and it gets even better, because according to Judd Foster, coming down the pike, the gun’s about to get even more modular, if you can believe it. Starting sometime in 2018, the Fostech Origin-12 Shotgun will be convertable into a 7.62x39mm Russian combat/tactical rifle/carbine/SBR (Short Barreled Rifle). “Starting in 2018, you’ll be able to replace the barrel assembly and the carrier and the magazine, and it’ll be a 7.62×39. So, for the first time, you have a platform that can be both a rifle and a shotgun. Currently it’s only a 12-gauge. We have an 18.25″ barrel and also 9.75″ barrel, which is an NFA weapon,” says (Judd) Foster. 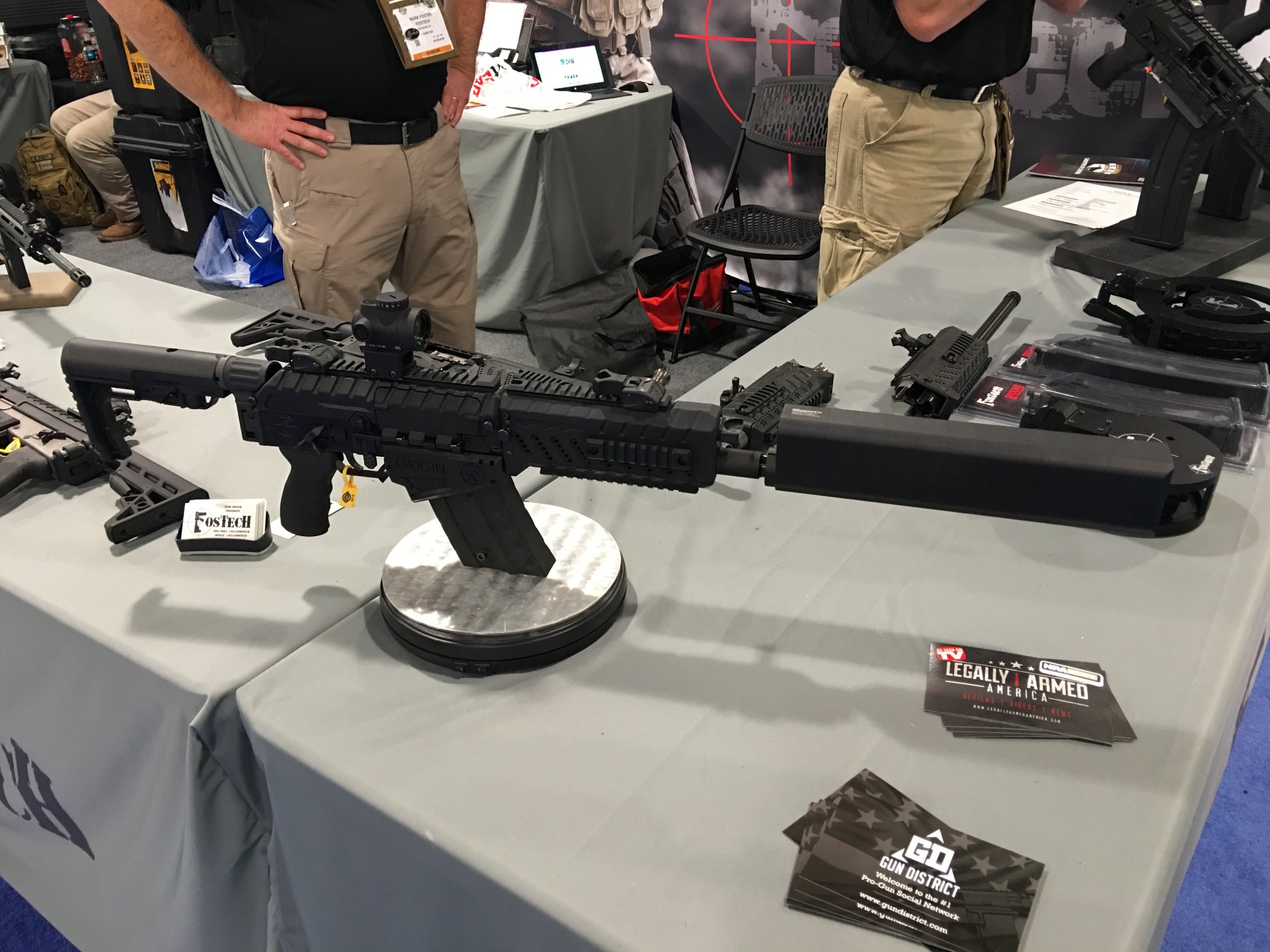 Since the video-interview environment during Judd’s Origin-12 Shotgun demo was a bit loud with all the shooting going on in the background, we subsequently shot a second demo video with Mark Foster in the SHOT Show 2016 exhibition on the last day of the show, very close to closing. We just wanted to make sure we had a good video in the can that our readers could hear properly. Anyway, that’s why we shot two videos on the gun, rathr than just one. So, enjoy.

Defense Review REALLY likes this shotgun. We just hope it really works (under adverse conditions and high round count), including with HEVI-Shot and FRAG-12 fin-stabilized 12-gauge grenade rounds, which include AP (Armor-Penetrating/Armor-Piercing) and HE (High-Explosive) rounds. That combo would be extremely deadly and effective.

Editor’s Note: Notice the very interesting Mid-Evil Industries 360 VFG Picatinny (Vertical Fore Grip, also written “vertical foregrip”) attached to the Fostech Origin-12 Shorty Shotgun in a couple of the embedded photos. The 360 VFG also comes in M-LOK and KeyMod-compatible models. DR got to play around with a 360 VFG a bit at the Cobalt Kinetics booth at SHOT Show 2016. We really liked it, and think it has a bright future in both 3-Gun competition and civilian tactical shooting circles. The Cobalt Kinetics folks seemed to really like using it on the new Cobalt Kinetics Evolve 3-Gun competition/tactical AR-15 rifle/carbine/SBR with Cobalt Advantage Reload System (CARS) magazine auto-eject/BCG auto-release feature, which DR’s already covered. 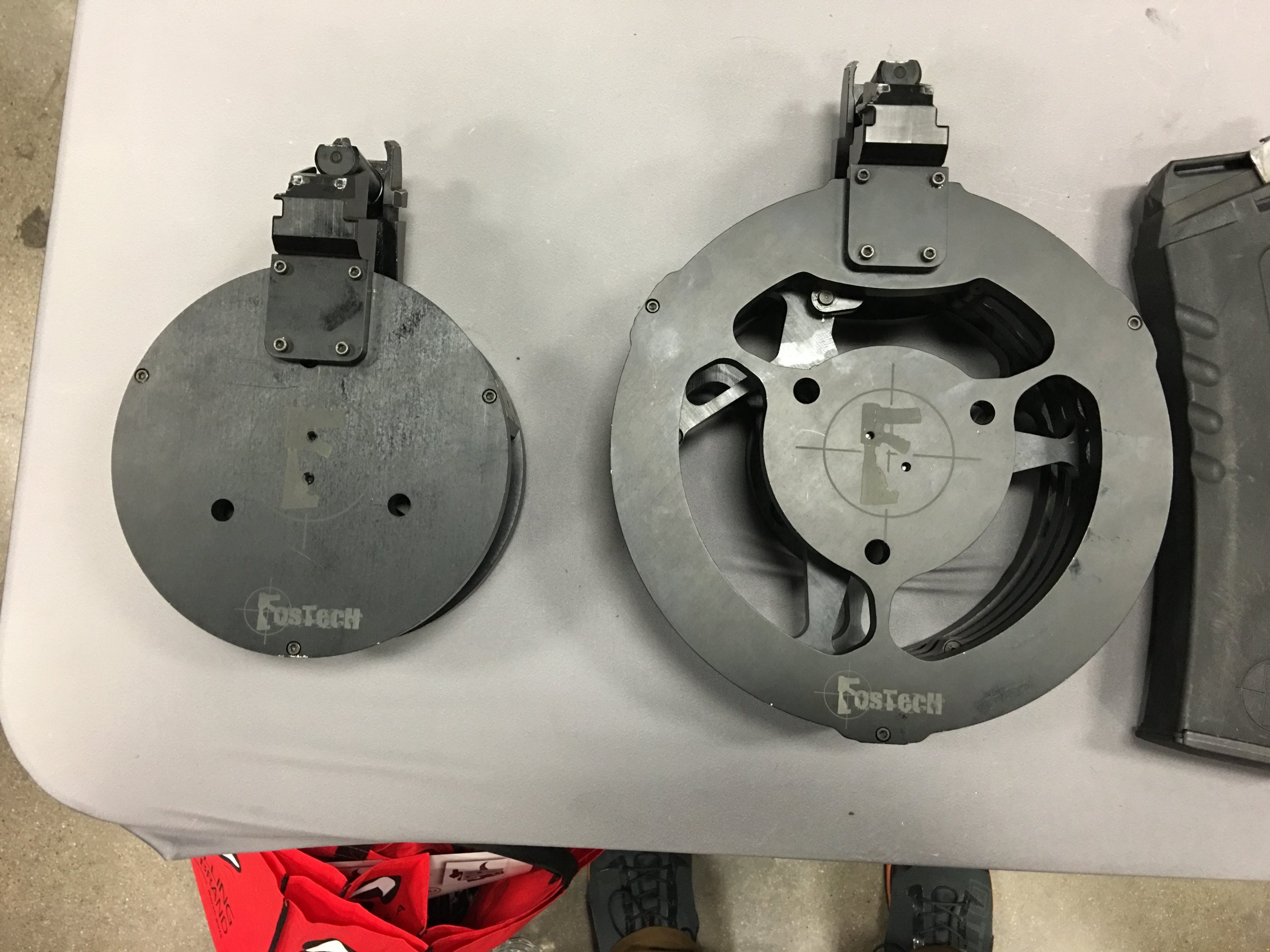 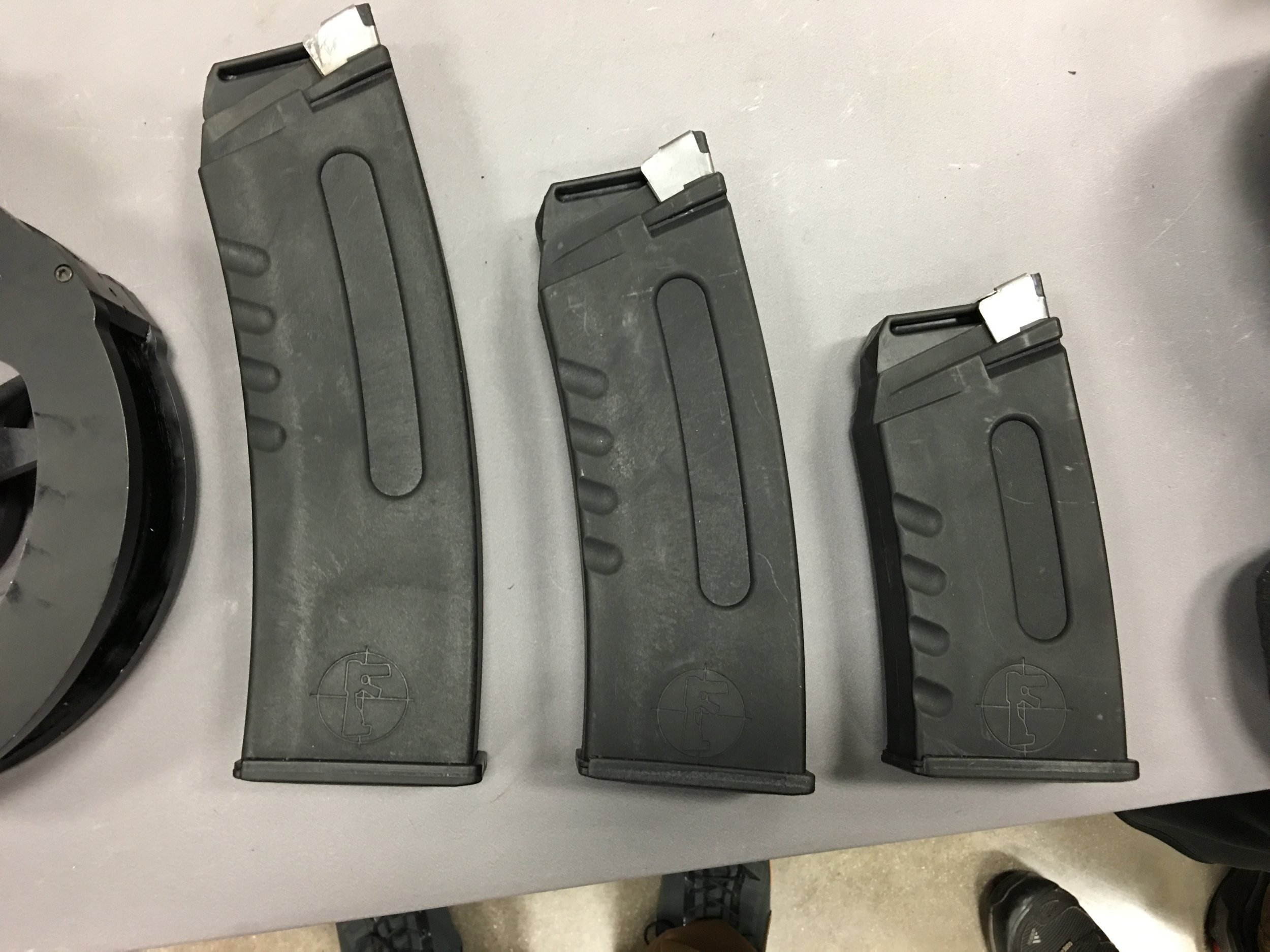 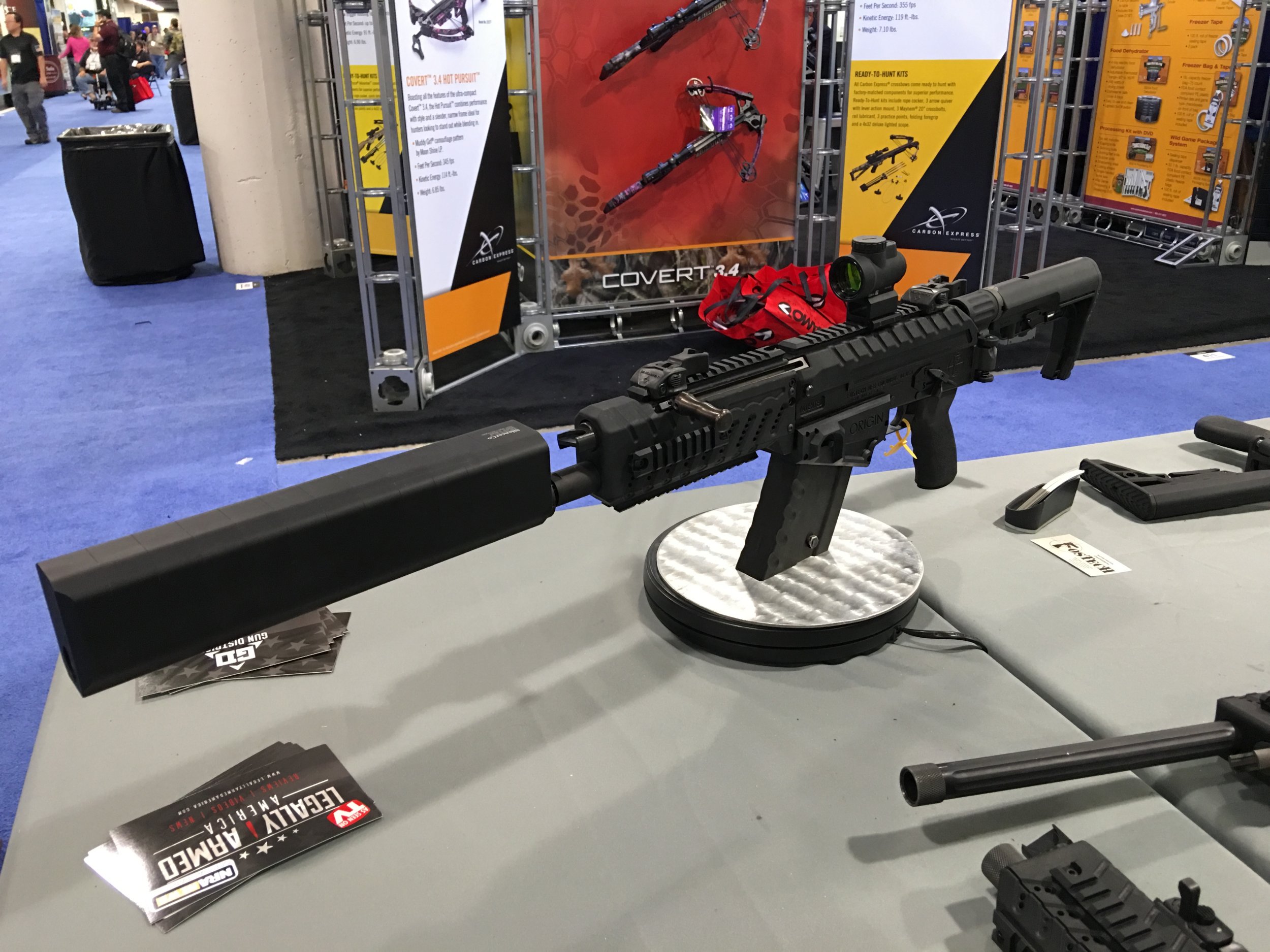 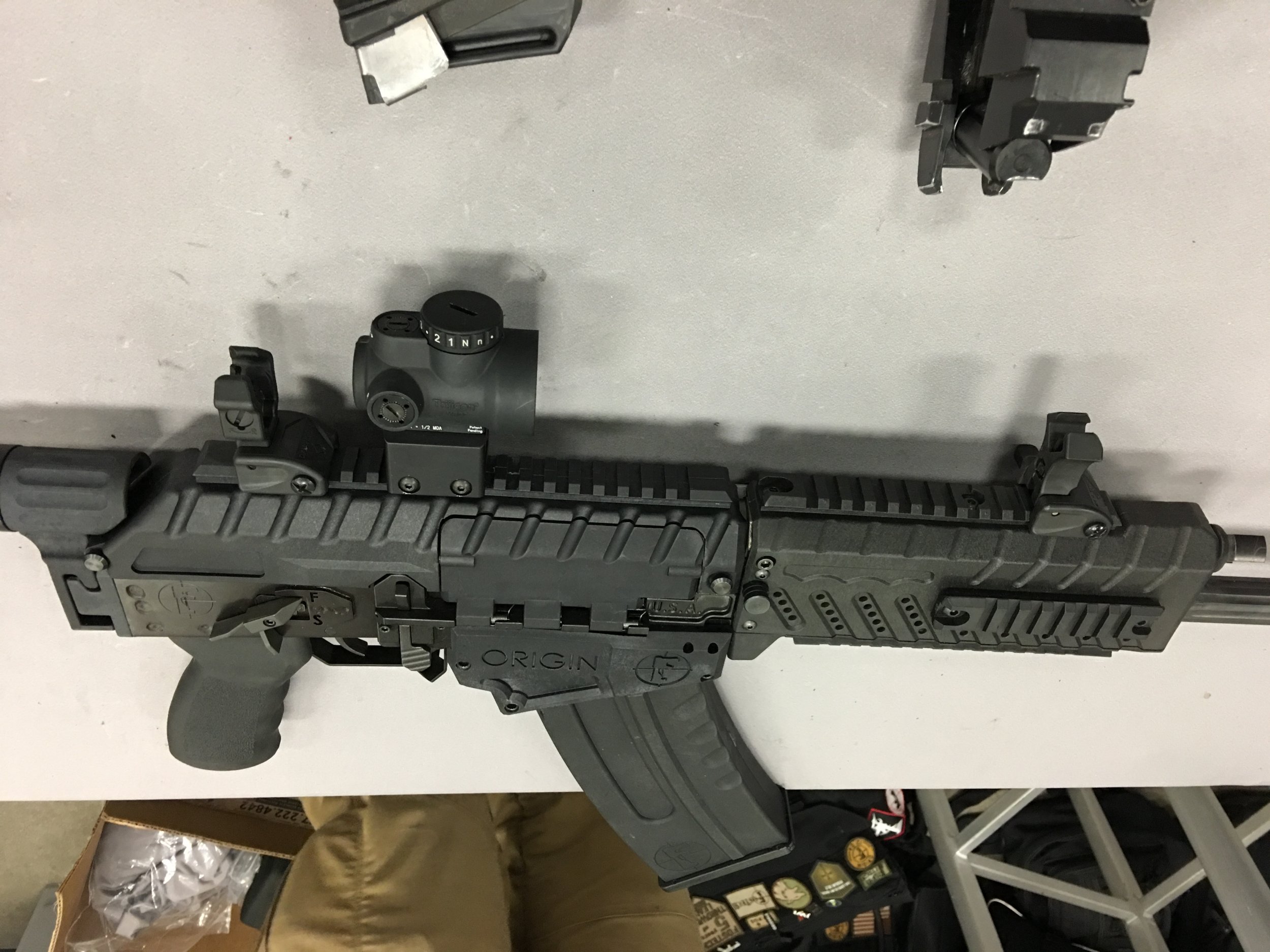 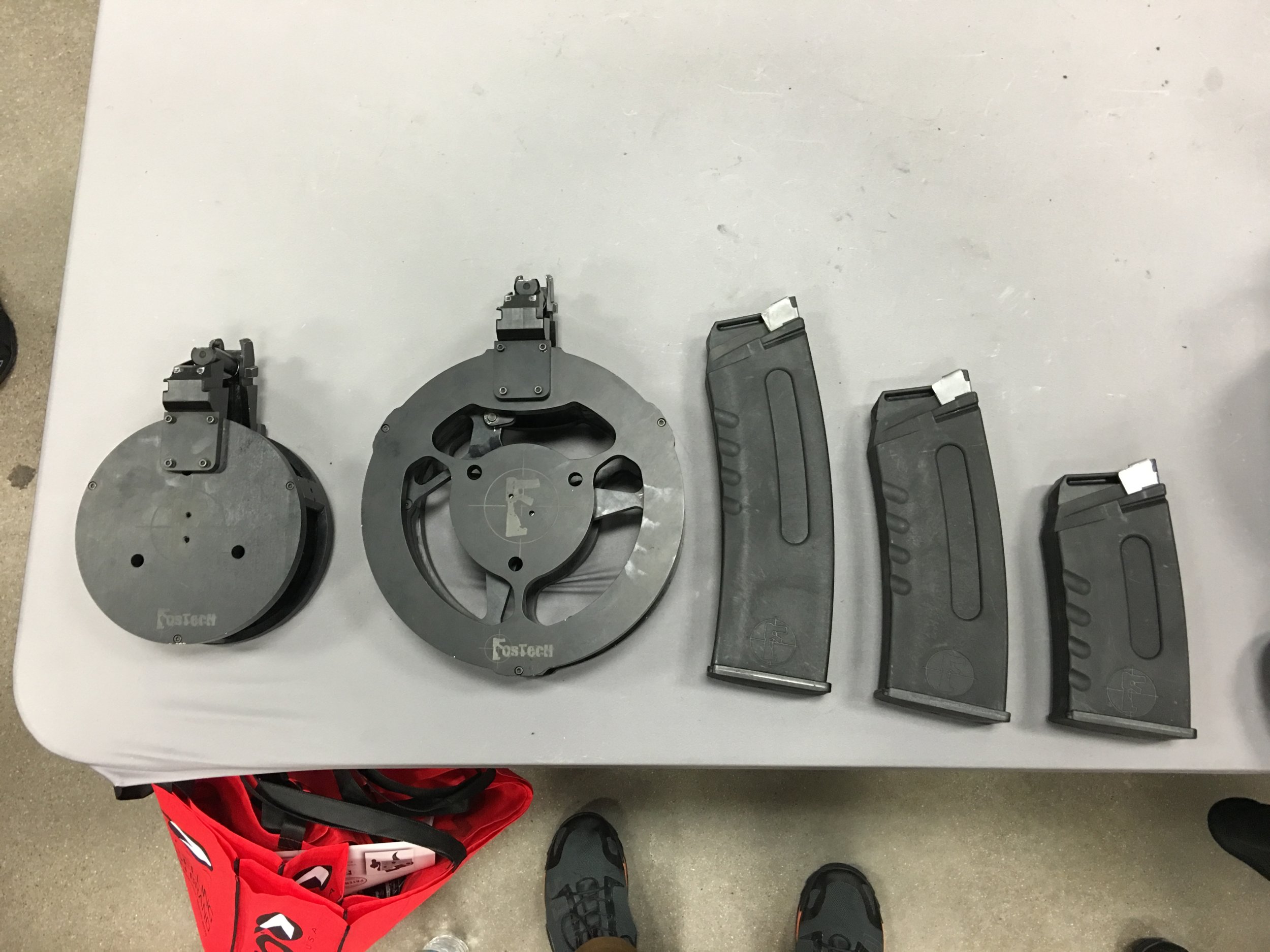 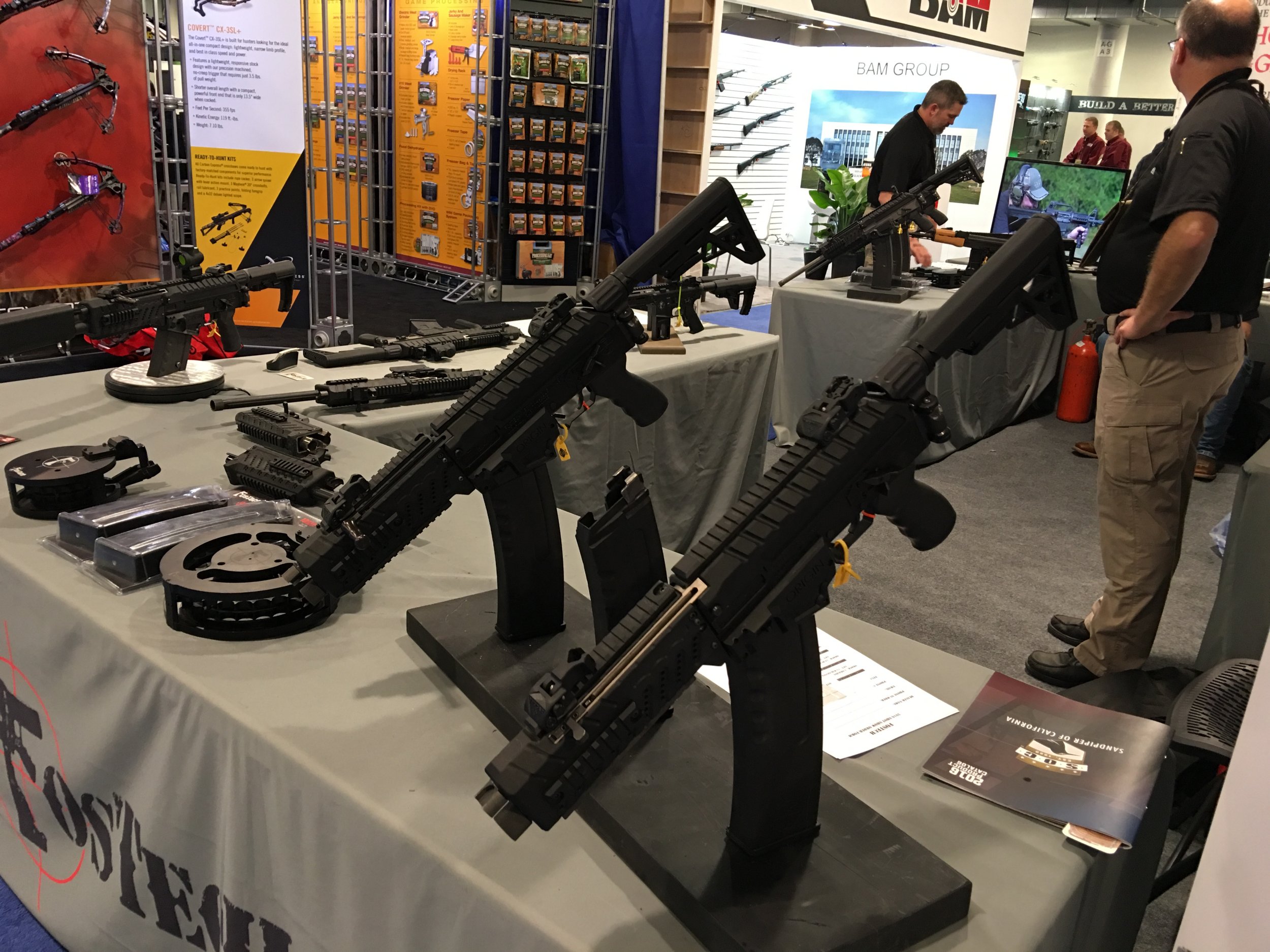