The hypertext link supplied for downloading and viewing the Ultimax 100 LMG/SAW video clip is located towards the bottom of this article, so you will need to scroll down to find it. However, we recommend that you read the following article first, so you can better appreciate what you’re watching (when you watch the video).

The 5.56x45mm Ultimax 100 LMG/SAW (Light Machine Gun/Squad Automatic Weapon) was originally designed and developed (along with its 100-shot drum magazine) from scratch in the late 1970’s/early 1980’s by Jim Sullivan (L. James Sullivan) and his design/development partner Bob Waterfield for then Chartered Industries of Singapore, a.k.a. CIS (now Singapore Technologies Kinetics Land Systems, a.k.a. ST Kinetics Land Systems).  It is considered by many small arms experts to be the best 5.56mm light machine gun/squad automatic weapon (LMG/SAW) in the history of the world. DefenseReview has been writing about the Ultimax 100 LMG/SAW virtually since our inception. And, in the last year or so, we’ve discussed the Ultimax quite a bit. In our article on Noveske Rifleworks Weapons packages, we discussed not only what’s important about he Ultimax, but also how and why it’s superior to the U.S. Army’s current light machine gun/squad automatic weapon (LMG/SAW), the problematic/subpar FN M249 SAW. We also mentoned the Ultimax 100 SAW in two of our articles on the Auto-Assault-12 Shotgun (AA-12 Shotgun): our first-ever blurb on the AA-12, and our more extensive article on the AA-12 and FRAG-12 12-gauge armor-piercing grenade family, published subsequently.

The reason we bring all this up is because Vincent L. Deniro (CEO) and Brian Vuksanovich (Chief Engineer) at American Defense Management, Inc. (ADM) have developed a bunch of modifications to the Ultimax 100 MK3 for VT Kinetics/Vision Technologies Systems, Inc. (VT Systems, Inc.) to create the…

A Note on the C-MAG: The original C-MAG was also designed and developed by Jim Sullivan. Before The BETA Company (a.k.a. BETA Co.) changed the TDP (technical data package) on the C-MAG, the original design’s double-drum magazine body was made from a type of nylon, and the center feed portion (box mag portion) was made of steel and didn’t rise above the double-drum portion like it does now. Both of these material aspects were on purpose. Because the double-drum portion was made of nylon, the original C-MAG worked reliably without the need for any type of lubricant. In other words, it didn’t require graphite powder lubrication to move the ammo/cartridges around the drums reliably. BETA Co. changed the nylon double-drum portion to a different material (a type of plastic/polymer) and changed the center feed portion to polymer/plastic, in the process making the center feed portion taller (due to the need to reinforce this part to prevent cracking/sheering during firing). One good thing the BETA Co. has done to the BETA C-MAG recently is to make the back plate of the C-MAG clear (Lexan), just like the latest factory Ultimax 100 drum mag (also 100-shots) back plate, so the operator can keep track of his ammo supply visually, during the fight.
The Ultimax 100 MK4 fires from the open-bolt, fires at a cyclic rate/rate-of-fire (ROF) of 400-600 RPM (Rounds-Per-Minute), and can be adjusted between these two rates by the operator. The MK4 can be had with a 13-inch barrel, side-folding buttstock, and Mil-Std-1913 rail system on top of the receiver (for mounting optics, lasers, etc.) and on the forend at the 3, 6, and 9 o’clock positions for mounting additional accessories (tactical white lights, lasers, vertical foregrips, etc.). Just like all versions of the Ultimax before it, the Ultimax MK4 utilizes the "Constant-Recoil" principle (invented by Jim Sullivan specifically for the Ultimax) to control recoil, instead of relying on receiver weight, like other machine guns.  Constant-Recoil is what allows the Ultimax to outhit heavier machine guns (chambered in the same caliber) on full-auto. By greatly reducing felt-recoil and muzzle rise, weapon controllability on full-auto is greatly increased. The result is more hits on target. This recoil attenuation/mitigation aspect makes the Ultimax the most contollable LMG/SAW in the world, even though it’s also the lightest-weight LMG/SAW in the world.

So, how does Constant-Recoil actually work?  In a sentence, it spreads the weapon’s recoil impulse out over time. So, instead of the shooter receiving a sudden jolt to his shoulder, he receives a slow, constant push.  The Ultimax utilizes a relatively long receiver length to accomplish this.  The long receiver combined with recoil spring weight keeps the bolt carrier group from impacting the rear of the receiver when the weapon is fired.  It’s this impact that normally transfers most of the recoil impulse to the shooter, especially since it happens so quickly (over a very short period of time).  In contrast, when the Ultimax is fired, the bolt carrier group runs out on the recoil spring, never making contact with the rear of the receiver.  Then, as the bolt carrier group runs back forward, it impacts the barrel extension, knocking the weapon forward and causing the muzzle to dip, whereupon the next round is fired (We’re firing on full-auto, remember?).  So, as the weapon goes into recoil again, it has to overcome the weapon’s forward momentum, as well as the barrel’s downward movement, so half of the weapon’s recoil forces are spent fighting against this forward movement, and then the bolt carrier group has to make the long trek towards the rear of the receiver, again.  This whole process spreads the recoil force on the operator out over a greater period of time, making the weapon feel like its steadily pushing on the operator, instead of pounding against him.  So, the weapon just sits there, staying on target during full-auto fire, even though it weighs so little. 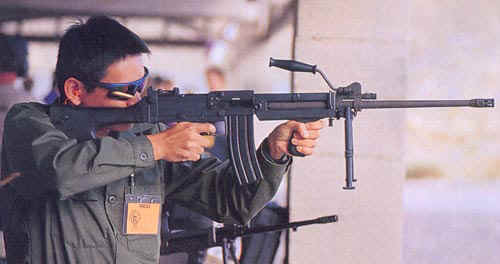 The practical benefits of all this are huge.  Believe it or not, Ultimax offers an 8:1 hit-ratio advantage over the M16 rifle when both are fired offhand on full-auto side by side against multiple targets, including moving targets. When both weapons are fired from the bi-pod, the Ultimax offers a 2.5:1 hit ratio advantage over the M16. The box/drum mag-fed Ultimax 100 LMG/SAW will outhit the belt-fed FN M249 SAW and MK46 MOD 0/1 at 3-times the range, on full-auto, even though it weighs considerably less (9-10.1 lbs, depending on the configuration vs. a listed 16.75 lbs for the M249 SAW).

The box-magazine/drum-magazine/double-drum magazine-fed Ultimax 100 MK4 is also much faster and easier to reload in a fight than the M249 SAW, especially in a dynamic, fluid situation like a running gun battle/firefight while the infantryman is firing on-the-move. In this situation, it’s nice to be able to reload quickly and relatively easily on the move as well, which the Ultimax allows an operator to do. You can reload the Ultimax on the move in a few seconds.  Try that with an M249.  Good luck to you.
The Ultimax can be reloaded as quickly and easily as an assault rifle, since it’s magazine-fed, rather than belt-fed. As it happens, the Ultimax 100 series is also significantly more reliable under adverse/combat conditions and high-round-count than the FN M249. 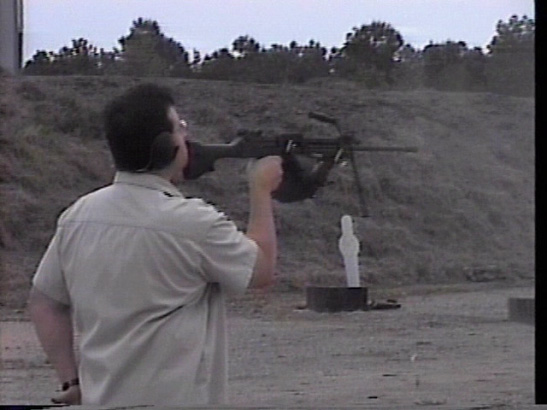 In fact, the Ultimax is so good that noted gunwriter Charlie Cutshaw, in his article on the Ultimax 100 MK4 for the latest issue of Special Weapons for Military & Police (SWMP), states that the Ultimax 100 MK3/MK4 makes for the best existing answer to the U.S. Marine Corps’ (USMC) stated requirements for a "Non-developmental, 5.56mm, Infantry Automatic Rifle (IAR)". Defense Review wholeheartedly agrees. The Marines could certainly do a lot worse. Incidentally, the Ultimax 100 MK4 is the cover gun of this issue (#42).
Right-Click here and then click on "Save Target As" to download and watch the boys from American Defense Management, Inc. put the Ultimax 100 SAW/LMG through its paces a little bit, and demonstrate its high controllability on full-auto (off-hand shooting).
If you’d like to get more info on the Ultimax 100 MK4 LMG/SAW, DefRev recommends that you contact American Defense Management, Inc. (ADM) by phone at 724-991-5418, by fax at 815-331-5271, or by email at [email protected]. Ask for Vince DeNiro or Brian Vuksanovich (if you can pronounce that last name…kidding).
Ultimax 100 MK4: Best Choice for USMC Infantry Automatic Rifle (IAR)? Video Clip by David Crane

David Crane started publishing online in 2001. Since that time, governments, military organizations, Special Operators (i.e. professional trigger pullers), agencies, and civilian tactical shooters the world over have come to depend on Defense Review as the authoritative source of news and information on "the latest and greatest" in the field of military defense and tactical technology and hardware, including tactical firearms, ammunition, equipment, gear, and training.
Previous Marines Get New Six-Shot 40mm Grenade Launcher: Meet the M32 MGL.
Next Modern Day Marine Military Expo: Latest and Greatest Tactical Technology