The September 2005 issue of S.W.A.T. Magazine features an article by Patrick A. Rogers on a pretty slick AR-15/M16 carbine/subcarbine barrel/flash suppressor combo from Noveske Rifleworks LLC (owned and operated by John Noveske), out of Pass, OR. The article is titled "John Noveske CQB Barrels and The Krink", and is worth reading.

Three 5.56mm barrel lengths are discussed: the 10.5-inch CQB barrel, the 14.5-inch AFGHAN barrel, and the 16.1-inch RECON barrel. According to the article, Noveske Rifleworks barrels are made out of 416 stainless steel with a "proprietary Noveske NATO match chamber, a polygonal 1:7 twist rifling and extended (M4) feed ramps. The muzzle is threaded at 1/2×28 TPI to accept the standard A2 (among other) flash suppressor." Noveske prefers stainless steel barrels for their superior acccuracy… 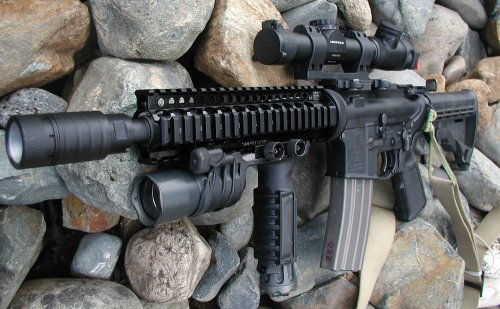 Mr. Noveske believes that the polygonal rifling in his barrels creates a superior seal between the bullet and the barrel, results in less wear on the bore, and also offers additional advantages. Glock and Heckler & Koch (HK) have always claimed that polygonal (HK) and hexagonal (Glock) rifling also create higher muzzle velocities due the better gas seal that’s created (since more surface area of the round travelling down the barrel is in contact with more surface area of the bore of the barrel–meaning less space for gases to escape past the traveling bullet).
For his 10.5-inch barreled subcarbines, Noveske apparently likes to use the Krinkov flash hider/suppressor (a.k.a. "The Krink", or "KFH"). The Krink flash suppressor, now manufactured in-house by Noveske Rifleworks, does three things:

First, according to Rogers, it "tricks the [10.5-inch] barrel into believing it’s longer" by increasing backpressure to sufficient levels. Second, it "captures gas and releases it over a longer time curve, which makes the short barreled guns more comfortable to shoot." So, the Krink/KFH must reduce the recoil forces by spreading the actual recoil impulse out over time, making for a longer push against the shoulder, rather than a fast jolt. This is the same idea as that behind Jim Sullivan’s (L. James Sullivan) "Constant-Recoil" principle, utilized by ST Kinetics’ Ultimax 100 LMG/SAW (Sullivan designed and developed the 5.56x45mm Ultimax for the Singaporese army about 25 years ago). However Constant-Recoil’s recoil attenuation/mitigation effect, resulting in greatly increased weapon controllability on full-auto and thus more hits on target, would have to be much more dramatic than that produced by the Krinkov flash hider–at least one would think. Third and finally, of course, the Krink mitigates the weapon’s flash signature.

A not-so-quick word on the Ultimax: The Ultimax 100 LMG, designed by genius small arms designer/developer L. James Sullivan (a.k.a. Jim Sullivan), weighs 9 lbs empty, and is currently the lightest LMG/SAW in the world. It’s also considered by many small arms experts to be the BEST LMG/SAW in the world. On full-auto (side-by-side shooting), the Ultimax will outhit the much heavier FN M249 SAW at greater range and is more reliable and durable/rugged under combat conditions (adverse conditions). In fact, the Ultimax is the gun that proved that a lightweight machine gun could outhit a significantly heavier machine gun (of the same caliber) on full-auto. The Ultimax is also MUCH faster to reload than the M249 (or any belt-fed machine gun, for that matter), since the Ultimax is drum magazine-fed (mag capacity: 100 shots)–so it’s as fast to reload as an assault rifle. Click here to read about how the ST Kinetics Ultimax was preferred by U.S. Marine Corps test shooters over the FN M249 SAW and rest of the weapons in the test, and downright outperformed the FN M249 SAW–even though the Ultimax used in the test didn’t even have workable sights! (Someone must have damaged the factory sights prior to the test.)

It’s interesting to note that Rogers witnessed someone use a Noveske Rifleworks 10.5-inch CQB barrel/KFH combo in three classes over a three month period. Over the three-course training package, the student fired 7,730 rounds of 5.56x45mm ammo comprised of NATO M855 (62-grainer), Black Hills 77-grain MK262 MOD 1, Hornady 75-grain TAP rounds, and commercial 55-grain ball, and ended up firing over 10,000 rounds total without any "discernable" loss in accuracy. That’s pretty good. Rogers also mentioned that a second shooter put over 4,000 rounds through his CQB barrel over a two-week period without any noticeable accuracy degredation. 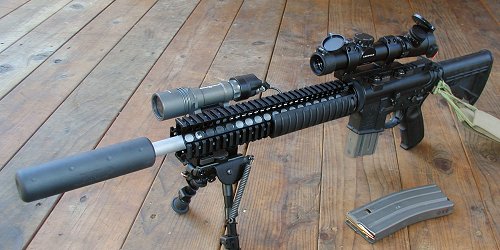 In addition to manufacturing and supplying barrels, complete upper receiver assemblies, and the Krink Flash Hider (KFH) (you can order these items direct), Noveske Rifleworks now also supplies complete 5.56mm and 7.62mm upper receiver packages (10.5" CQB, 14.5" AFGHAN, 16.1" RECON, 18" SPR, and AR-10) and complete weapons packages to fulfill any mission-specific requirement.
Noveske Rifleworks can be contacted by phone at 541-479-6117, by fax at 541-479-2555, or by email at this page. While Noveske sells all of their products, including the Krink Flash Hider/Suppressor, directly to their customers, Mid-South Tactical Network (MSTN) and G&R Tactical both carry Noveske Rifle Works products, including the Krink Flash Hider (KFH), as well.
You can contact Mid-South Tactical Network (MSTN) by phone at 901-542-9608, or by email at [email protected]. Ask for Wes Grant or Paul Ertsgaard.
You can contact G&R Tactical by phone at 757-483-0654, or via email at [email protected]. G&R has a few close-up photos of the Krink on their website.
Click here to visit the S.W.A.T. Magazine homepage.
If you’d like to subscribe to S.W.A.T. Magazine, click on this link.

David Crane started publishing online in 2001. Since that time, governments, military organizations, Special Operators (i.e. professional trigger pullers), agencies, and civilian tactical shooters the world over have come to depend on Defense Review as the authoritative source of news and information on "the latest and greatest" in the field of military defense and tactical technology and hardware, including tactical firearms, ammunition, equipment, gear, and training.
Previous R.A.P.AIR™ Force-on-Force Instructor Training and Certification Program
Next Smith & Wesson M&P Pistol: The Next Evolution in Polymer-Framed Combat Pistols?