The photos contained in this article were taken by (and provided to DefenseReview.com by) Charlie Petty. They were first shown in his original post on the M&P pistol (Military & Police pistol) at AmBackForum.com.

DefenseReview first heard that Smith & Wesson was developing an new polymer-framed semi-auto pistol to go head-to-head with the Glock, Springfield XD, and Heckler & Koch (HK) polymer-framed pistols–as well as SIG aluminum-framed (and steel-framed) pistols–awhile back. But, we had never seen it. Then, about a month ago (July 21, 2005, to be exact), gunwriter Charlie Petty posted pics and info on the new "evolutionary" (his word) Smith & Wesson M&P pistol, or Military & Police pistol, at AmBackForum.com (Your American BackYard Forum). The new gun, which Petty somehow got first dibs on regarding a test and evaluation at Smith & Wesson headquarters, looks interesting and features what appears to be a modified version of the Smith & Wesson Performance Center’s signature "snake scale", or "fish scale" (depending on who you’re talking to), slide serrations. The S&W M&P pistol, according to Petty, is a full-size DAO (double-action only) pistol, and will be… 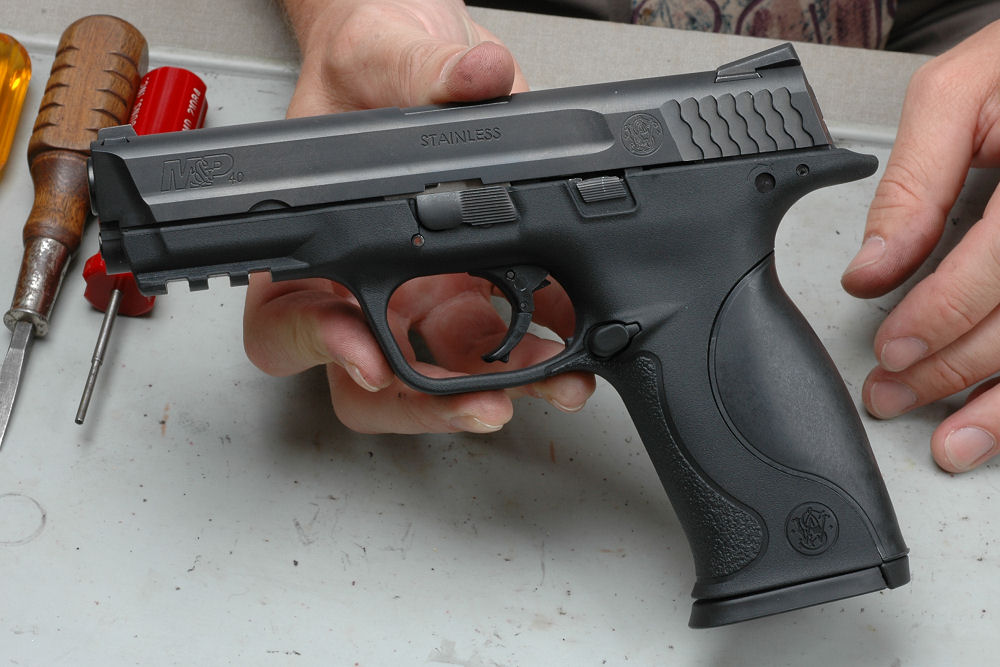 available in the following calibers (and they will be made available in the following order): .40 S&W (appropriately), 9mm (9x19mm), .357 SIG, and finally .45 ACP. It’s DefRev’s understanding that compact models of the S&W Military and Police pistol will also be introduced in all calibers listed above. According to Petty, the Smith & Wesson M&P pistol is going to be the cover story for the premiere issue of American Cop magazine.

The following is what Mr. Petty had to say about the new gun at AmBackForum.com:…
"It is not a ‘super gun’ as some are saying but is a big evolutionary step in polymer frame pistols".

"The most noticeable feature is a great improvement in grips. The SW 99 had three interchangeable backstraps but this one has three interchangeable grip panels that also cover the sides and markedly change the feel of the grips. The medium and large panels have a noticeable palm swell and a rubber overmould. They can be changed by the user in a matter of seconds without tools.

The trigger is exceptional and has some pretty clever engineering. It is DAO at around 7 lb. but it feels like a good revolver more than anything. The takeup is consistent without stacking.

One of the drawbacks of many polymer pistols is that they require you to pull the trigger to field strip. Part of the neat stuff with the trigger mechanism is a sear release that can only be operated with the slide locked open. There is a lever that is easily reached through the ejection port that releases tension on the sear. Then you turn the external takedown latch and the slide can be removed. 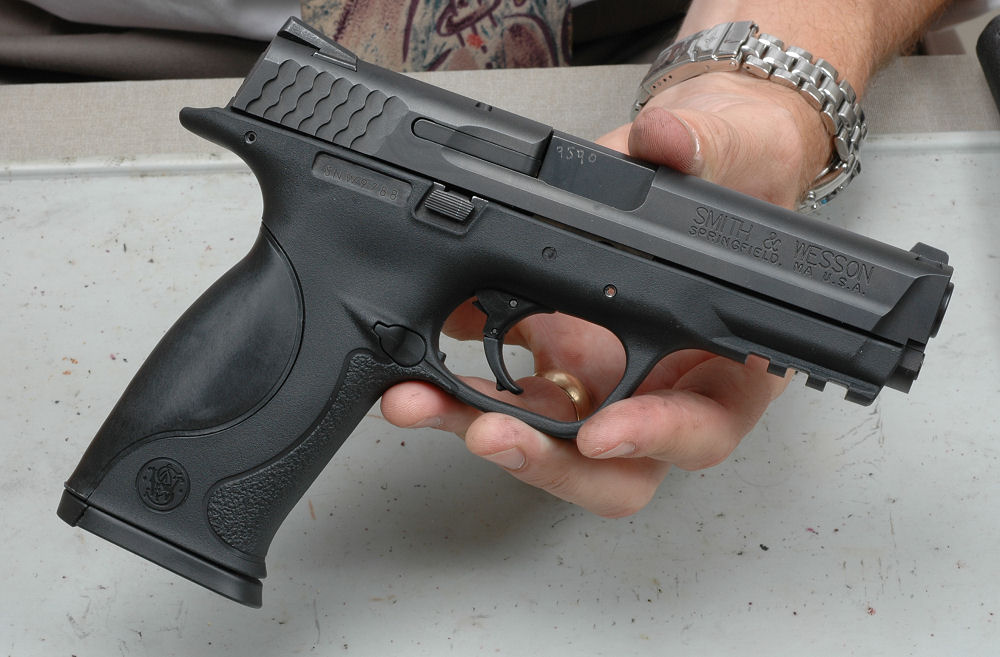 After the visit I was able to get a prototype pistol for more extensive testing and it has done quite well. Accuracy was under 3" which is good for a service pistol and the trigger makes it easy to shoot well. I’ve shot well over 1000 rounds without a functional malfunction. There have been a couple of light hits on primers but S&W has already made a change in the striker to correct that.

There are some design features that make the frame much more rigid than other polymer guns and seem to have a very positive effect on perceived recoil. Subjectively I think recoil is a bit less than comparable polymer guns of similar weight firing the same ammo. It is a matter of opinion but I think recoil is very moderate for a 27 ounce gun.

It has an ambidextrous slide stop and the magzine catch is reversible by the user if needed. Magazine capacity is 15 rounds in .40 and 17 in 9mm."

David Crane started publishing online in 2001. Since that time, governments, military organizations, Special Operators (i.e. professional trigger pullers), agencies, and civilian tactical shooters the world over have come to depend on Defense Review as the authoritative source of news and information on "the latest and greatest" in the field of military defense and tactical technology and hardware, including tactical firearms, ammunition, equipment, gear, and training.
Previous Noveske Rifleworks Weapons Packages: CQB Barrel Meets ‘The Krink’
Next PowerQuick Powered Ascender for Tactical Assaults (Structural and Maritime Assault Ops): Wall Scaling Made Easy