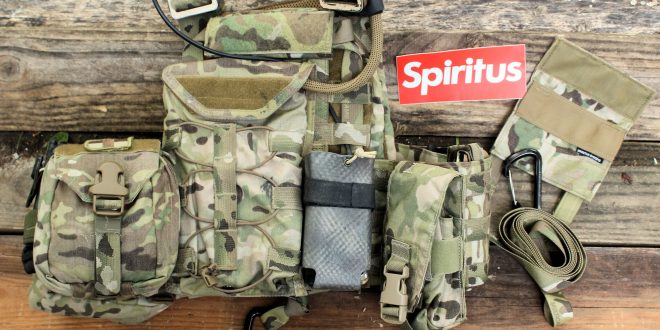 Back in 2004, while taking part in advanced urban combat course. At the Direct Action Resource Center (DARC), just outside Little Rock AR, my Special Forces team was introduced to a method of casualty evacuation known as the ‘DARC strap’. It was essentially about 7 feet of 1inch tubular nylon weaved through the back of the body armor, with the bottom end snapped linked to the wearer’s pants belt. The top end is comprised of roughly a 3-ft diameter loop folded up and secured in place by rubber bands.

The way it worked is that instead of grabbing the drag handle that comes on most body armor and plate carriers, you instead grab the loop of tubular nylon that is rubber banded in place at the top of the carrier. Because it’s secured to both the plate carrier and the belt, when you pull on it to drag a casualty, it does not pull solely on the carrier, but more on the hips. This lifts the hips up, which leads to less friction with the ground, which of course makes it easier to drag someone to safety and medical treatment. 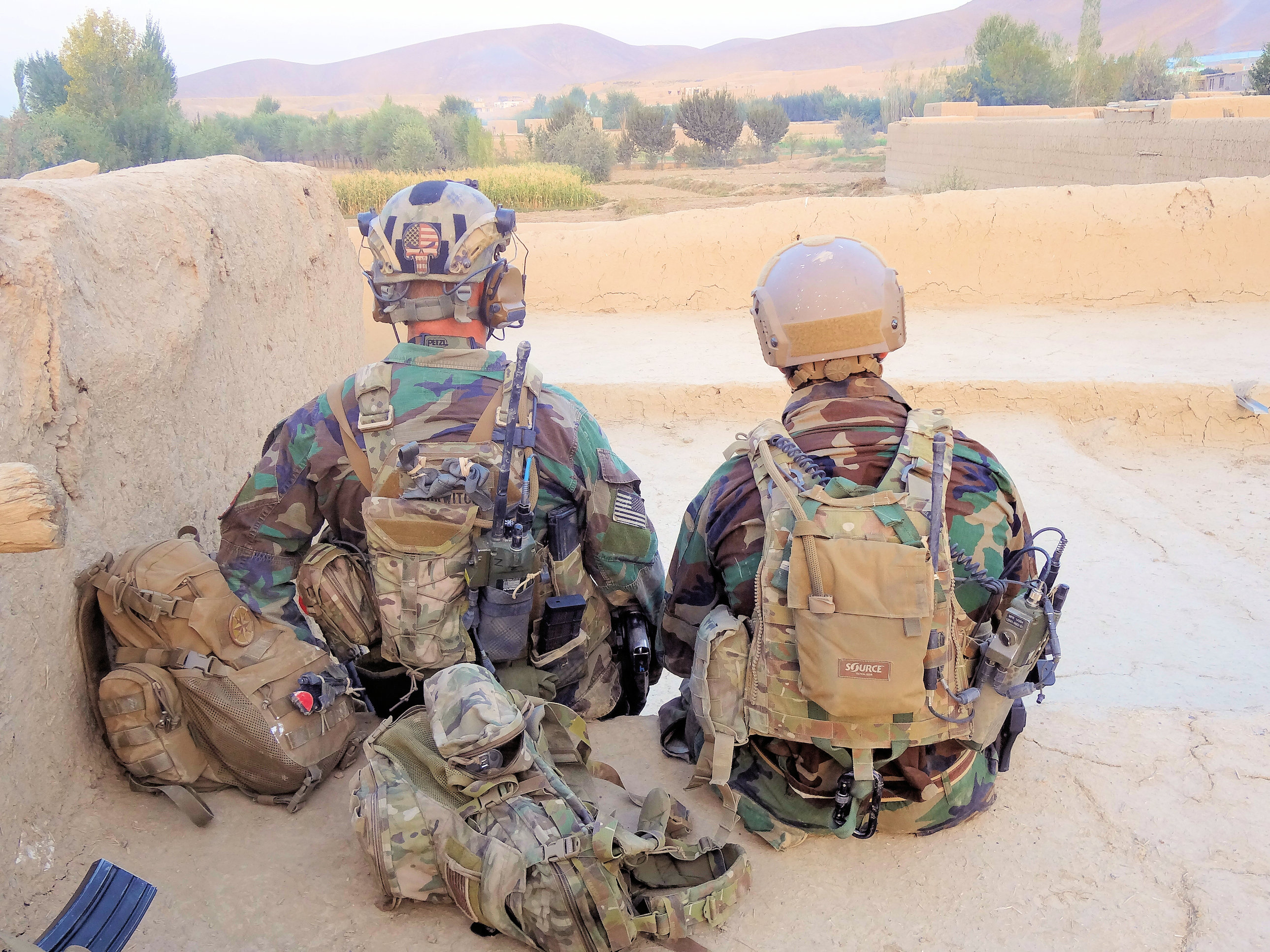 Afghanistan 2015. Note the tubular nylon rubber banded at the top of the carriers. These are the homemade DARC straps. They work so well at making dragging a casualty easier that they were SOP on all the teams I deployed with.

Easier also equals faster, which means less time being exposed to enemy fire while dragging someone. Not only does it make it easier to pull a casualty, but it also keeps the body armor from being pulled up, which seems to happen every time you pull on a traditional drag handle. The latter ususually results in either choking or pulling up and off the casualty completely. 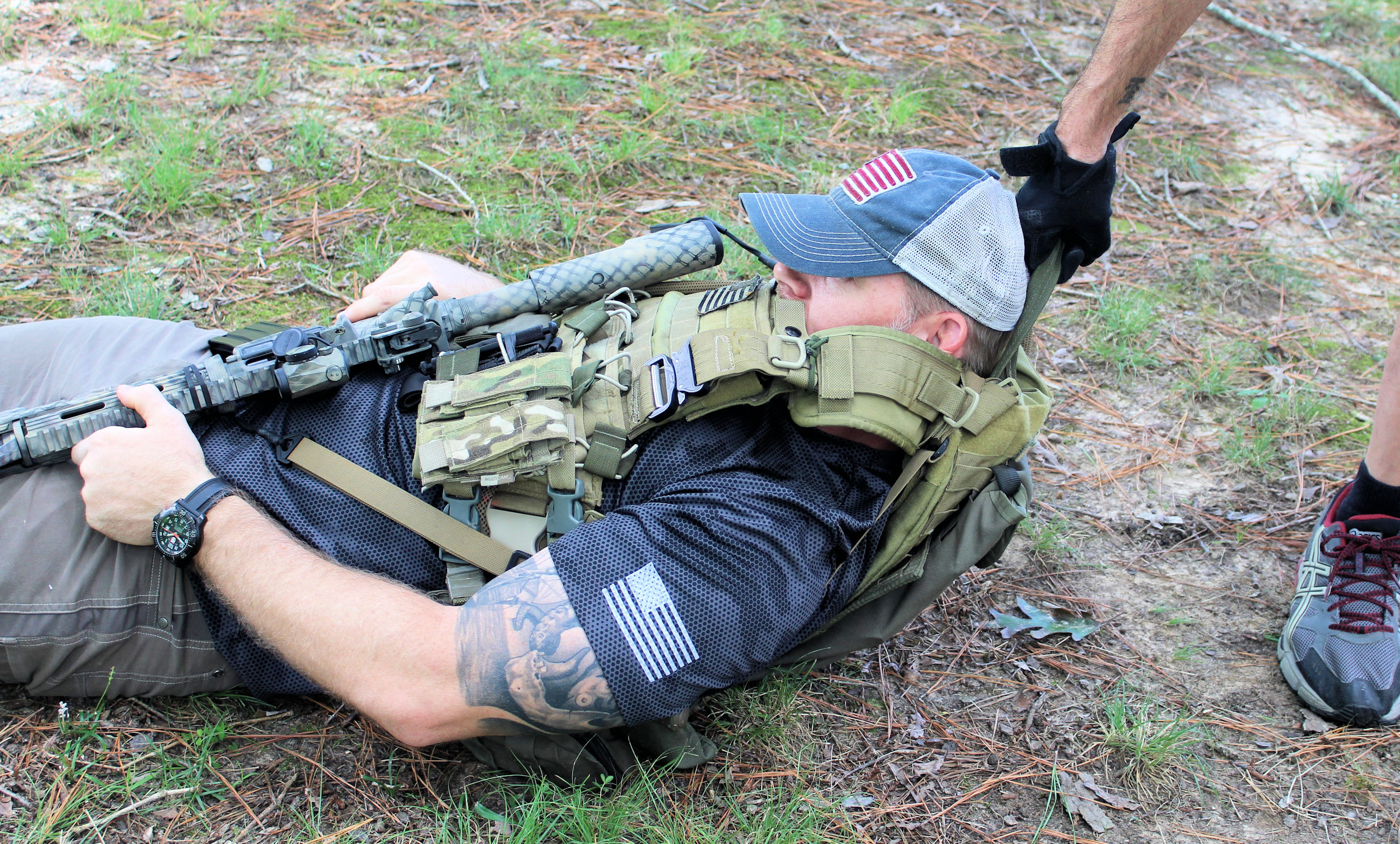 Nine times out of ten, when trying to drag an unconscious casualty using the traditional drag handle that comes on the back of most carriers, the carrier will either ride up into the persons neck and arm pits (not a great feeling for a already hurt person), or worse, slip off the wounded person completely, leaving the wounded in place, and you left holding an empty carrier.

Bottom line, I would say it’s close to 50% easier to drag someone in full kit, using a DARC strap compared to just grabbing the drag handle that comes on most carriers. In fact, because there’s always a tendency for the armor to ride up, I think the drag handles that come on the back of carriers frankly work better as a place to hang it on a hook when not wearing it, rather than as a solid grab point to drag a fallen comrade out of the line of fire.

After using the DARC strap in training, and seeing the added benefit during my next four combat deployments (1 in Iraq and 3 Afghanistan), I made sure it was a mandatory item on every teammate’s carrier. The only downside to the DARC strap is that you needed a class on how to make one, and the excess strap was rubber banded at the top of the carrier when not in use. So, it could sometimes come undone, which meant you had loose strap material hanging off the back of your kit, potentially catching on things.

Well, there’s finally a commercial version of the DARC strap available to consumers/end-users. Developed by Spiritus Systems, it’s called the “Recovery Handle“, and it’s a step up from the homemade DARC strap that works just as well, and is very low profile. Made under approval by the cadre at DARC, the Spiritus Systems Recovery Handle rigs up to the back of the carrier in the same manner as the original DARC strap, minus the need for an elaborate knot to secure it. Additionally, the excess straps can be conveniently stored away within the handle itself when not in use, thus eliminating the need for rubber bands to keep it folded up during storage. 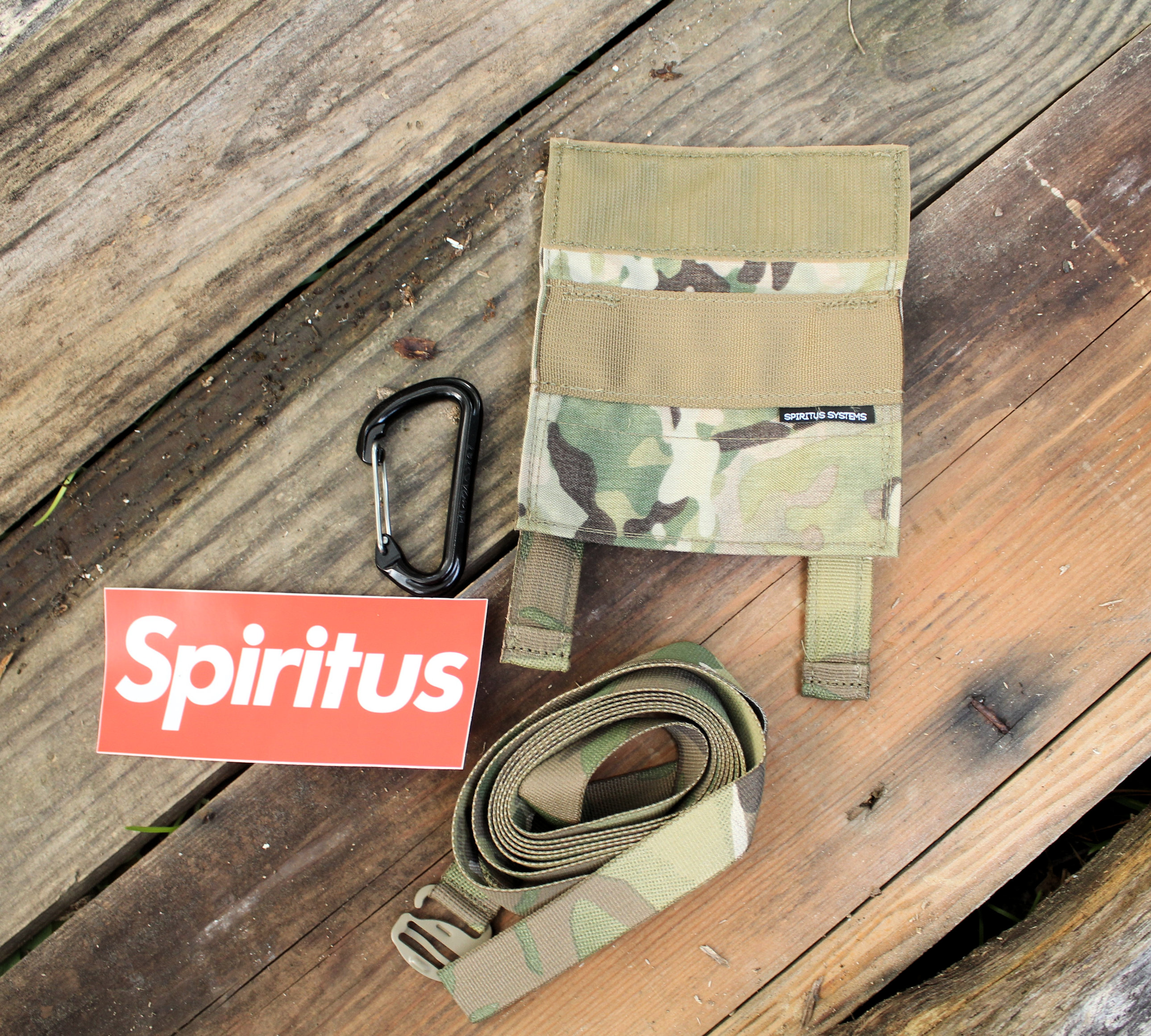 The length of the strap can also be adjusted to fit the wearer, ensuring that if it’s deployed, the loop that deploys out for grasping while dragging will also be just the right size to support the head. The loop acts as a cradle to support the head with a helmet on, by the way. The Recovery Handle also utilizes a snap link to secure to the belt, which is included, providing the same benefits as the original homemade version, i.e., preventing the body armor from being pulled up when dragging a casualty, as mentioned earlier.

While it may not seem like a big deal if body armor rides up some when dragging a wounded person, imagine being the injured person. A plate carrier riding up into your neck is not going to feel that great, now is it. Plus, the carrier pulling up under your armpits and trying to slide off you could make things worse, depending on the injury . I don’t know about you, but the last thing I’d want to be doing is messing around trying to drag a buddy to safety while being shot at, and having to simultaneously deal with a carrier that’s slipping up as I pull, possible choking or coming off my comrade. Using the Spiritus Systems Recovery Handle makes it both easier and faster to drag a wounded teammate out of the line of fire, which is a very big deal in combat. 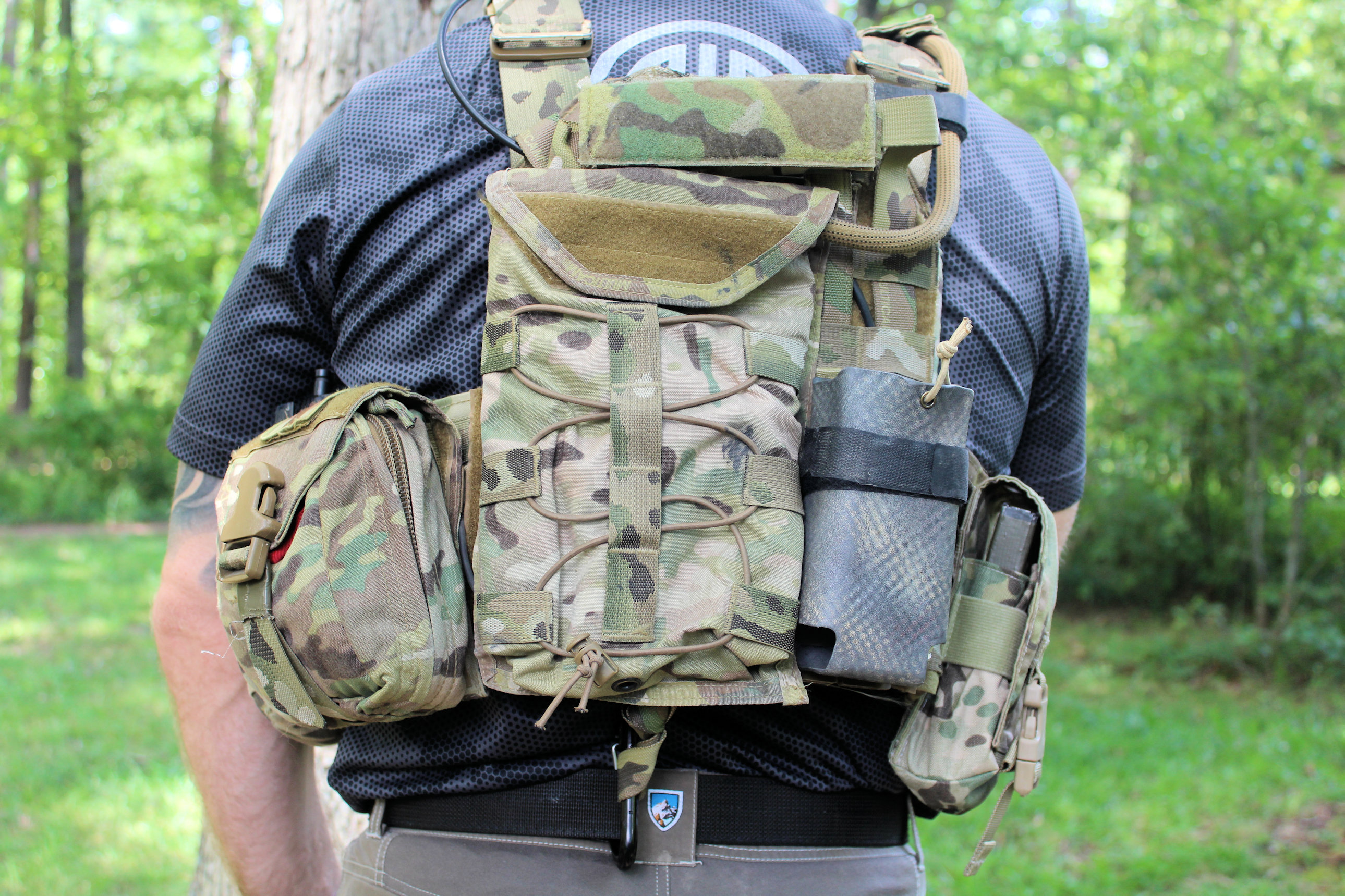 Back of plate carrier with Spiritus Systems Recovery Handle attached to it. At the top of the carrier, you can see the drag handle/strap stow pocket. At the bottom, note the snap link attached to the shooter’s belt. 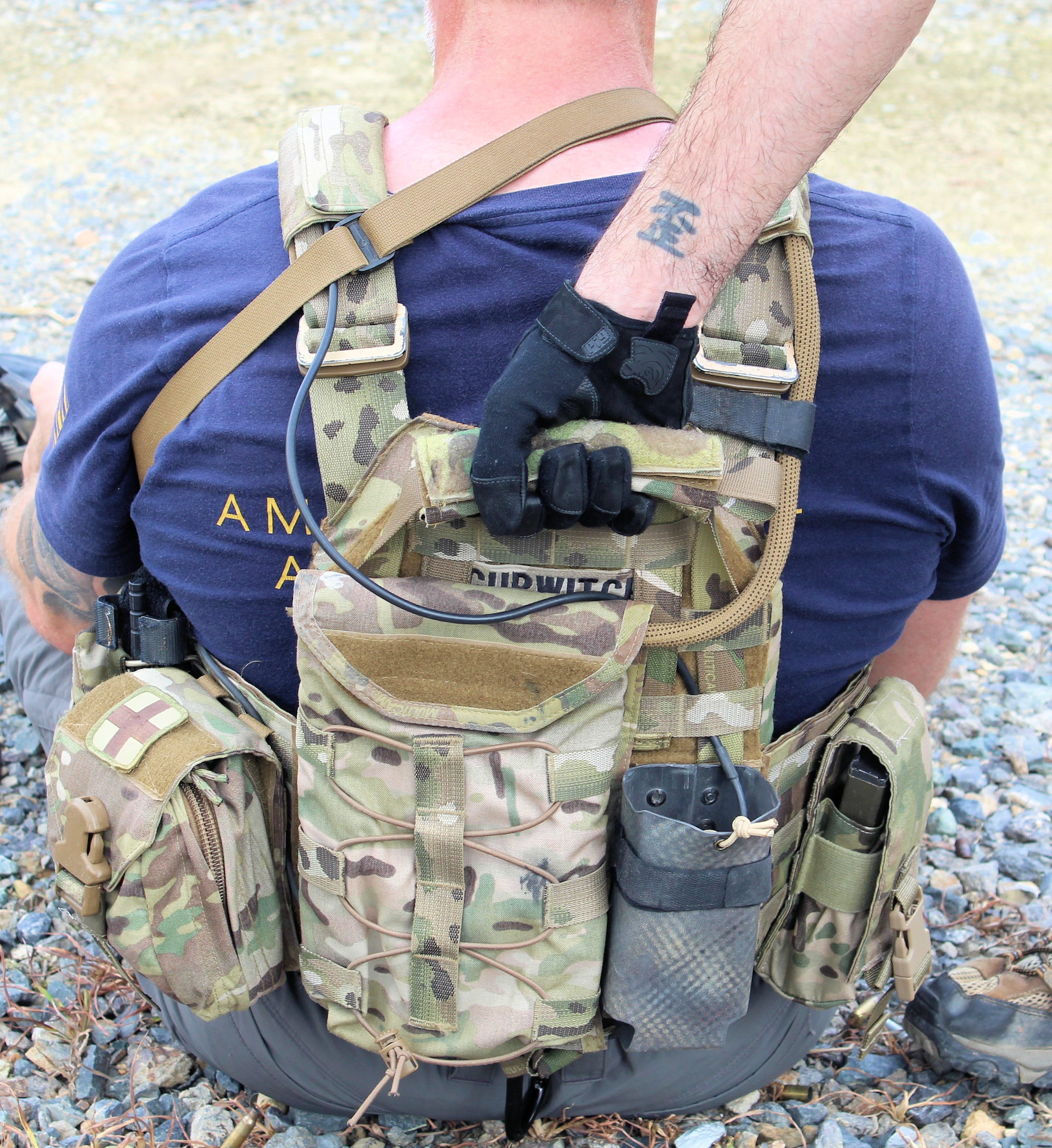 To deploy the Recovery Handle, Step 1, grasp the handle and start to pull the casualty. 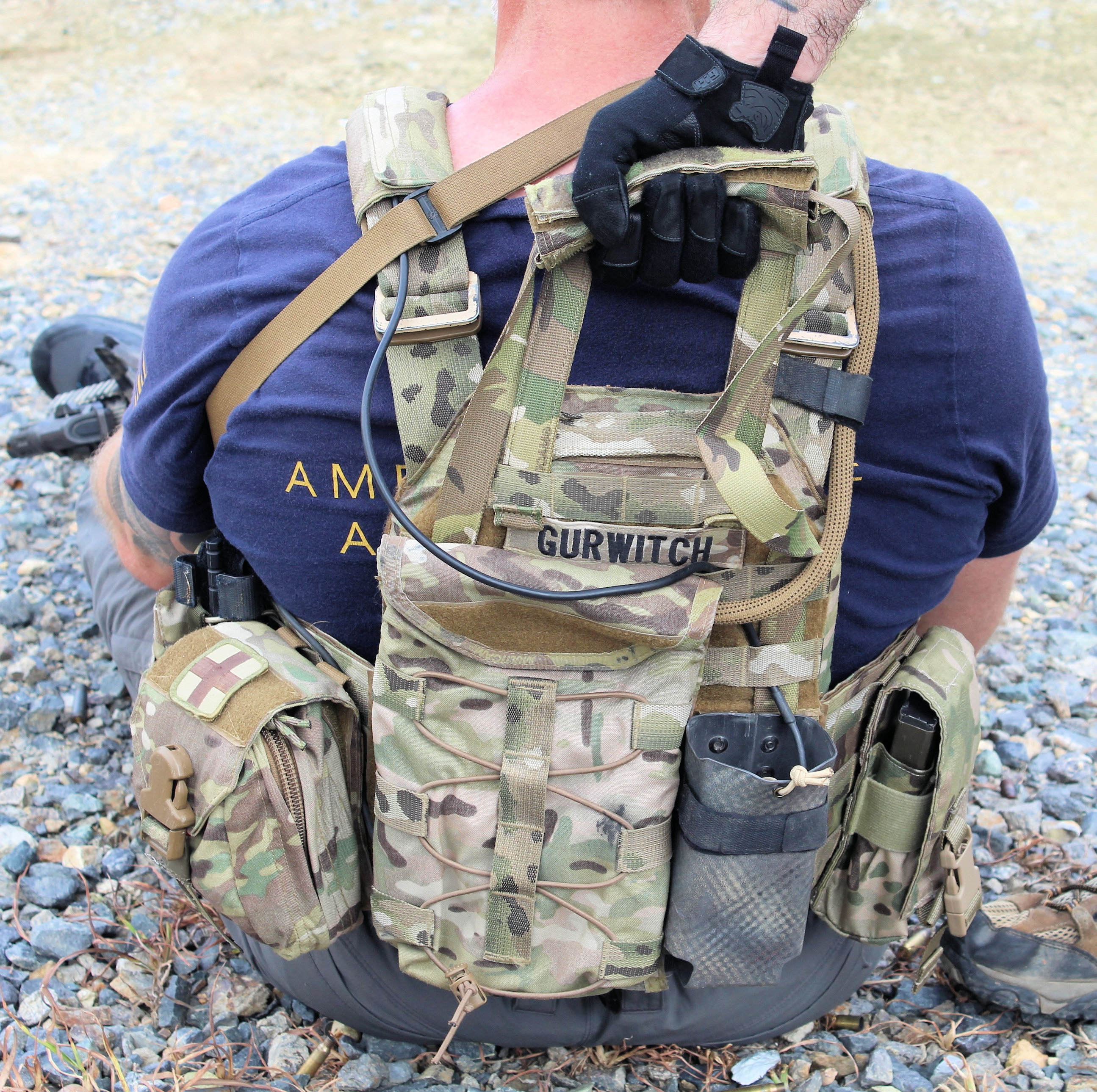 As you pull on the handle, it will start to detach from the Molle webbing. The drag loop straps start unfolding out of the handle pocket. 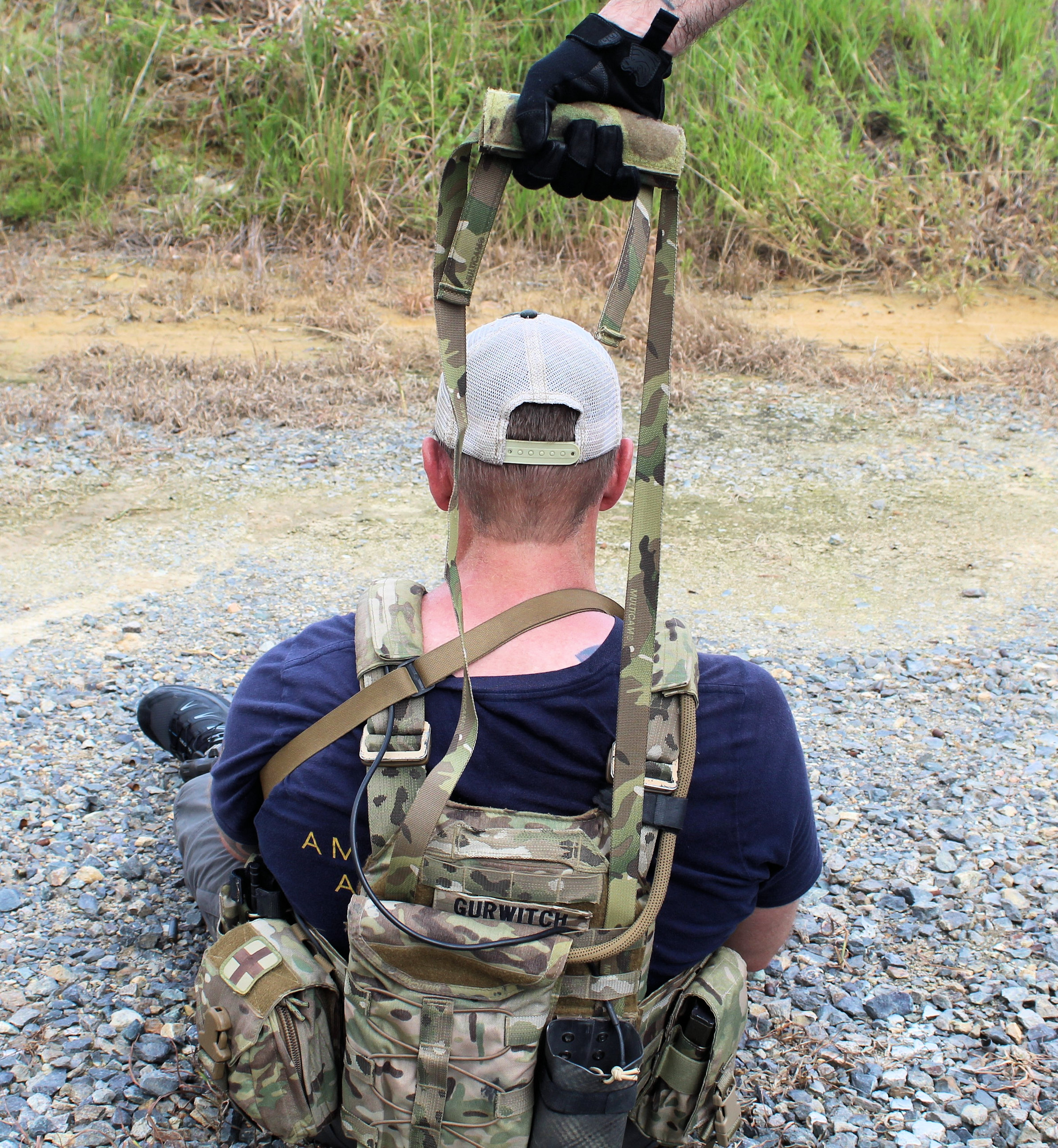 Continuing to pull on it to drag a casualty will expose the full length of the drag loop, giving you two to three feet of pull line, depending on how its sized. 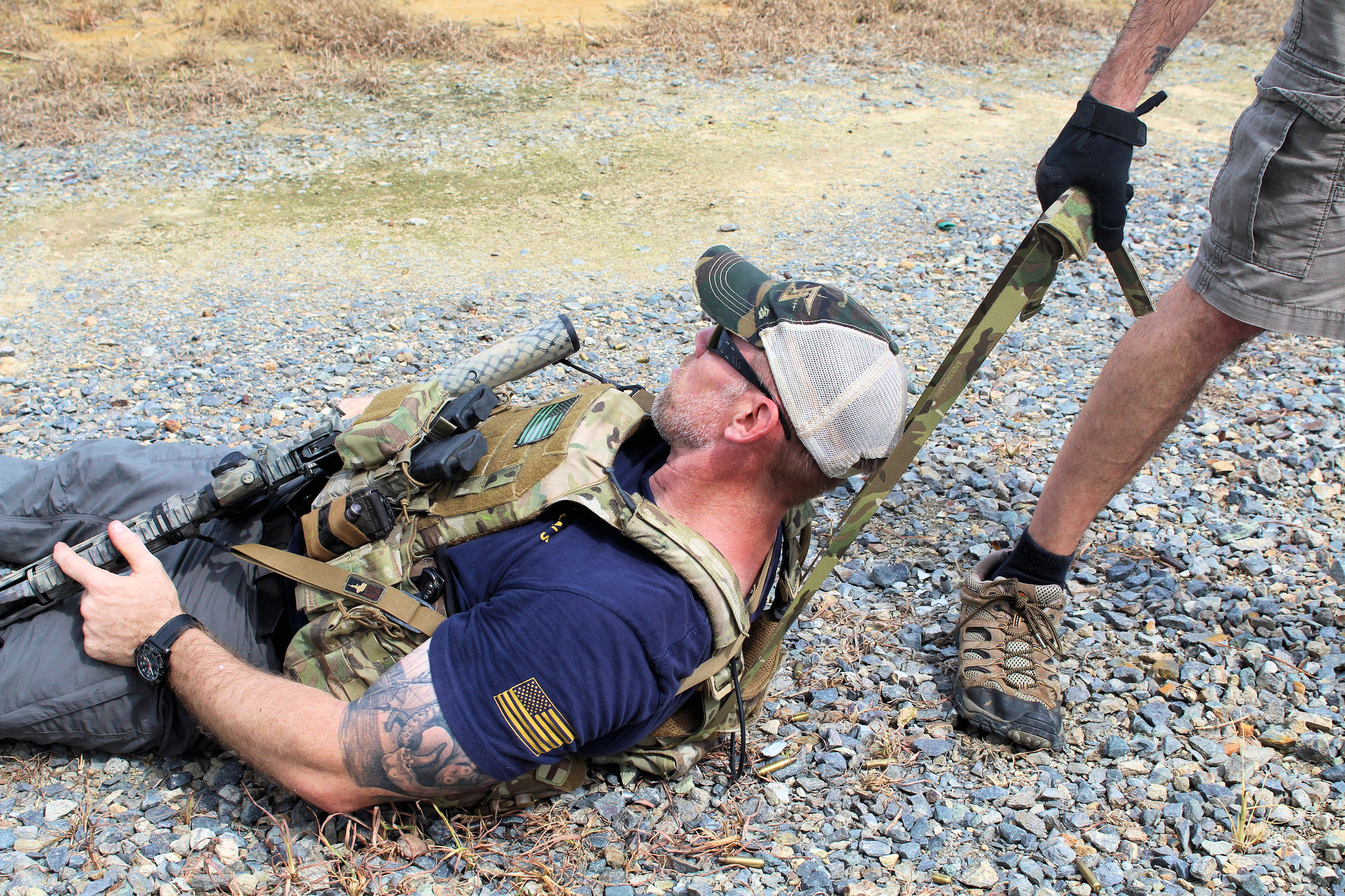 Not only that, but the person dragging the casualty doesn’t have to bend down as far while dragging. So, the Spiritus Systems Recovery Handle finally addresses a gap that exists with regards to immediate care under fire, that is wounded recovery. There are dozens upon dozens of various individual first aid kits (IFAKs) being offered, but there’s very little out there in the way individual items to help getting wounded operators out of the line of fire, aside from either flexible, folding or rigid litters. Those litters indeed do an excellent job transporting wounded soldiers to waiting evacuation platforms, but they’re not practical to use if the wounded person is still exposed to enemy fire.

Remember, before employing a litter, you must first get the wounded person either behind cover or out of the line of fire as quickly as possible. Nine times out of ten, that means dragging the casualty to the closest cover.

I think Spiritus Systems’ Recovery Handle works so well, in fact, that it should be a mandatory piece of kit for every soldier or tactical officer going into harm’s way, period. After all, before you can stop bleeding, clear airways and perform other immediate combat casualty care, you must first get the wounded out of the enemy’s sights. Spiritus Systems Recovery Handle allows for just that, a safe and rapid means to drag a fallen comrade out of harms way. 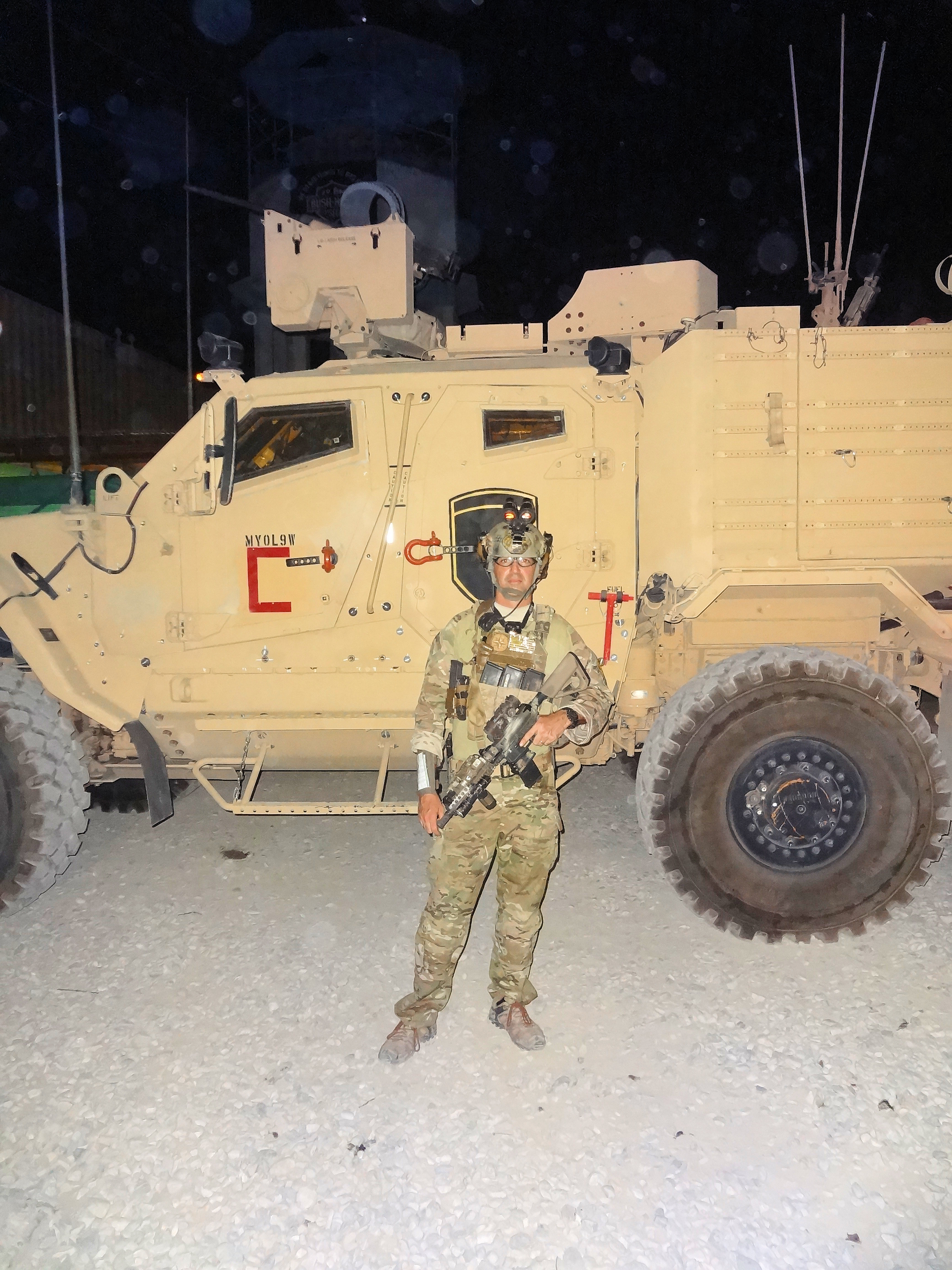 One added benefit of using this Recovery Handle is getting wounded operators in and out of vehicles. Due to the average height of the doors on mine resistant vehicles of 4 to 5 feet off the ground, getting a wounded man in our out can be tricky. We found that if one man stands on the roof of the truck and deploys the wounded man’s Recovery Handle, it can be used to help lower the casualty out of the vehicle, or vise versa, help raise the wounded into the vehicle.