This article contains the first digital photo of a camouflaged/combat-ready/field-ready Foster-Miller Armed/Weaponized Talon Robot/UGV (Unmanned Ground Vehicle), a.k.a. SWORDS robot of which DefenseReview is aware. The weapon attached to the Talon Robot/SWORDS robot in the pic would appear to be an AT4 anti-armor/anti-tank weapon (ATW) (i.e. rocket launcher), which is produced by Saab Bofors Dynamics, Weapon Systems Division–although we haven’t yet confirmed/verified this. The second photo down (demonstrator SWORDS outfitted with FN M249 SAW on carpet at the 24th Army Science Conference technology exhibition) was taken for DefenseReview.com by Arnold Crane, Photographer, and is the property of DefenseReview.com. Click on photos to view them full-size.
Back in December, DefenseReview published an article on the Foster-Miller Armed/Weaponized Talon Robot/Special Weapons Observation Reconnaissance Detection System (SWORDS) Unmanned Ground Vehicle (UGV), a.k.a. Robo-Soldier, after we got a chance to view it and see it demonstrated at the 24th Army Science Conference (ASC 2004) in sunny Orlando, FL. The article was titled "Armed/Weaponized Infantry Robots for Urban Warfare and Counterinsurgency Ops".
It’s DefRev’s understanding that 18 of these Weaponized Talon Robots/SWORDS robots/UGVs are still scheduled to report for duty in Iraq either this month (March 2005) or next month (April 2005). DefenseReview is eager to see how these 18 battle-ready robots perform in the counterinsurgency role. The key to the survivability of SWORDS would appear to depend on the remote operator’s ability to successfully "sneak and peek" with SWORDS Unmanned Ground Vehicle (UGV) to locate and shoot/kill the enemy before the enemy locates and shoots/kills SWORDS, then exfil the area as quickly as possible or look/patrol for the next enemy target(s). Low observability/low visible signature would thus… 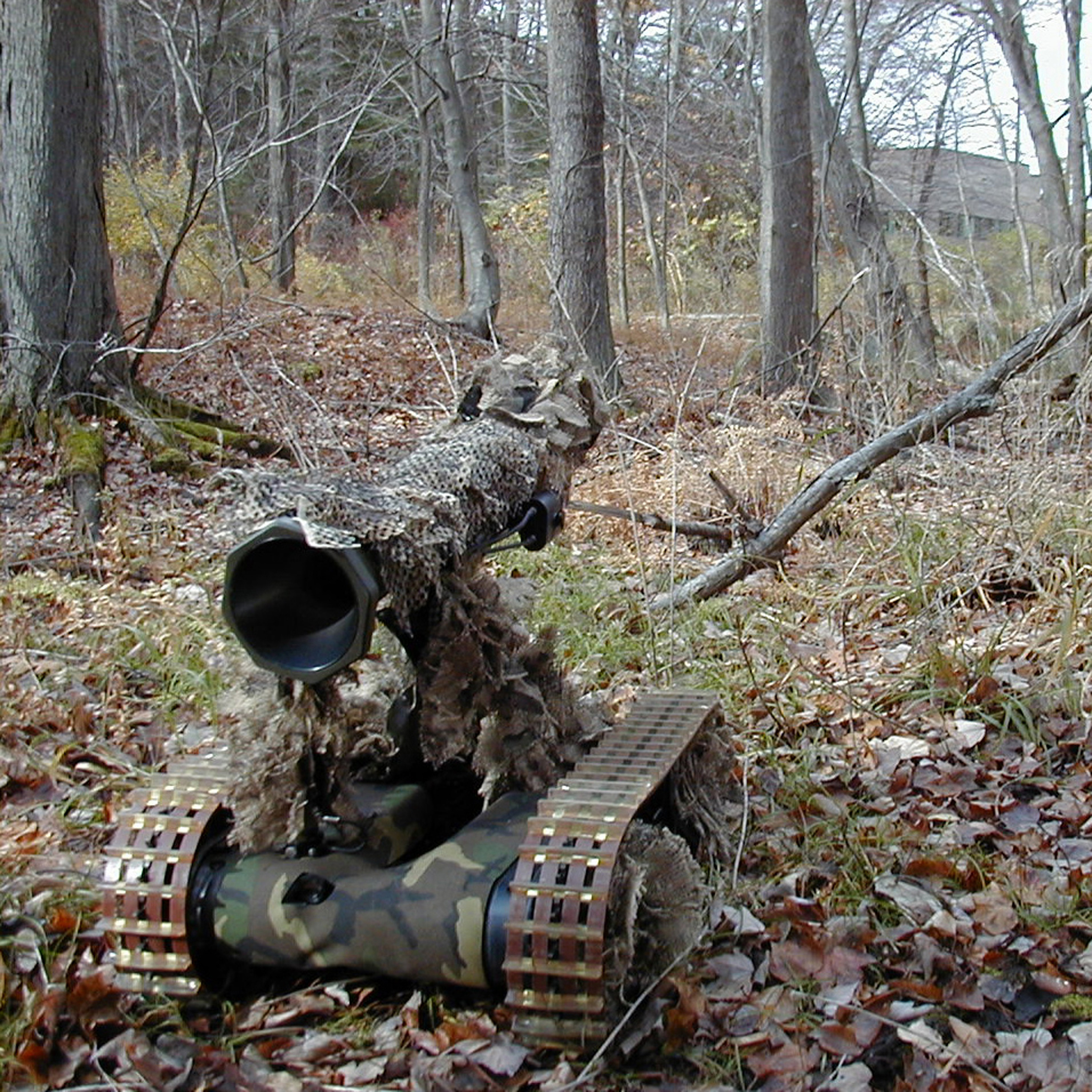 seem to be a necessary combat attribute for SWORDS. The combination of operator skill and inherent/intrinsic system low observability/low visible signature would appear to be the only defense SWORDS has against enemy ground fire, including small arms fire. To enhance the low observability aspect of SWORDS, the U.S. Army will no-doubt want to camouflage the system as well as possible. This is going to prove especially challenging in the urban warfare environments in which SWORDS is most likely to be employed/deployed for counterinsurgency (CI). Effective urban camouflage is a tricky business, as the terrain/visual environment is constantly changing from street to street, and structure to structure (building to building).

Hopefully, the U.S. Army and U.S. Marine Corps (USMC) will soon have operational and effective electro-optical camouflage, a.k.a. adaptive camouflage, a.k.a. active camouflage, a.k.a. chameleonic camouflage, a.k.a. cloaking technology for infantry soldiers/Marines and combat systems. It’s DefRev’s understanding that the Army is currently working on it. If we were them, we would be looking very closely at Project Chameleo, which is run by Richard Schowengerdt (Richard N. Schowengerdt), along with the adaptive camouflage sensor-and-display systems tech being worked on by Philip Moynihan of Caltech and Maurice Langevin of Tracer Round Associates, Ltd. for NASA’s Jet Propulsion Laboratory (JPL). Both projects are essentially "Predator" camouflage brought to life.
In the meantime, it would appear that the best passive/conventional camouflage for urban warfare operations would be Hyperstealth Biotechnology Corp.’s digital camouflage patterns like Fracture Camouflage a.k.a. Camouflage Designated Enhanced Fractal Geometry (C2G Camouflage)/Fractal Camouflage, Tactical Assault Camouflage (TACAM) multi-environment camouflage, and Hyperstealth’s new PSD Urban Digital Camouflage, Jordan KA2 Night (Blue) and Special Forces Woodland digital camouflage that they recently designed and developed for the Kingdom of Jordan, specifically for the Jordanian Security Forces (JSF) and Jordanian Special Forces (Note: DefRev recently received a pic of Jordan’s new desert digital camo pattern, but we haven’t been cleared to show it, yet.).
In addition to visual camouflage, the Army might also be advised to suppress any 7.62mm general-purpose machine gun (GPMG) or 5.56mm light machine gun/squad automatic weapon (LMG/SAW), or any .50 BMG weapon (like the Barrett M82A2) attached to SWORDS with a high-quality silencer/suppressor, or "muzzle can"–in other words, sound and muzzle-flash camouflage. With standard-velocity 7.62x51mm, 5.56x45mm, and 12.7x99mm (.50 BMG) ammo, there will still, of course, be a supersonic crack when the shot is fired and the bullet breaks the sound barrier, but the enemy will not be able to determine the direction from which the shots are coming, nor will they be able to see any muzzle flash. This is important, and perhaps even crucial. The Army does NOT want the enemy to be able to identify SWORDS robots easily and engage them with small arms fire (AK-47, AKM, AK-74, etc.) and RPG-7 (Rocket-Propelled Grenade-7) fire. Even if the Foster-Miller and the US Army end up armoring SWORDS against ballistic attack, camouflage will most likely still prove to be extremely important. It would seem to be exceedingly difficult to armor SWORDS adequately against large-bore AP rifle rounds (especially considering SWORDS current load/weight limit), and most likely impossible to armor it against RPG attack. With effective camouflage technology and sound suppression tech, ballistic armor becomes much less important. Remember, the enemy can’t hit what it can’t see or locate via sound triangulation. Regarding the latter, it can be significantly more difficult to triangulate sound origin (even without the use of sound suppression) within urban warfare environments, since sound will reverberate or "bounce" off buildings/structures. 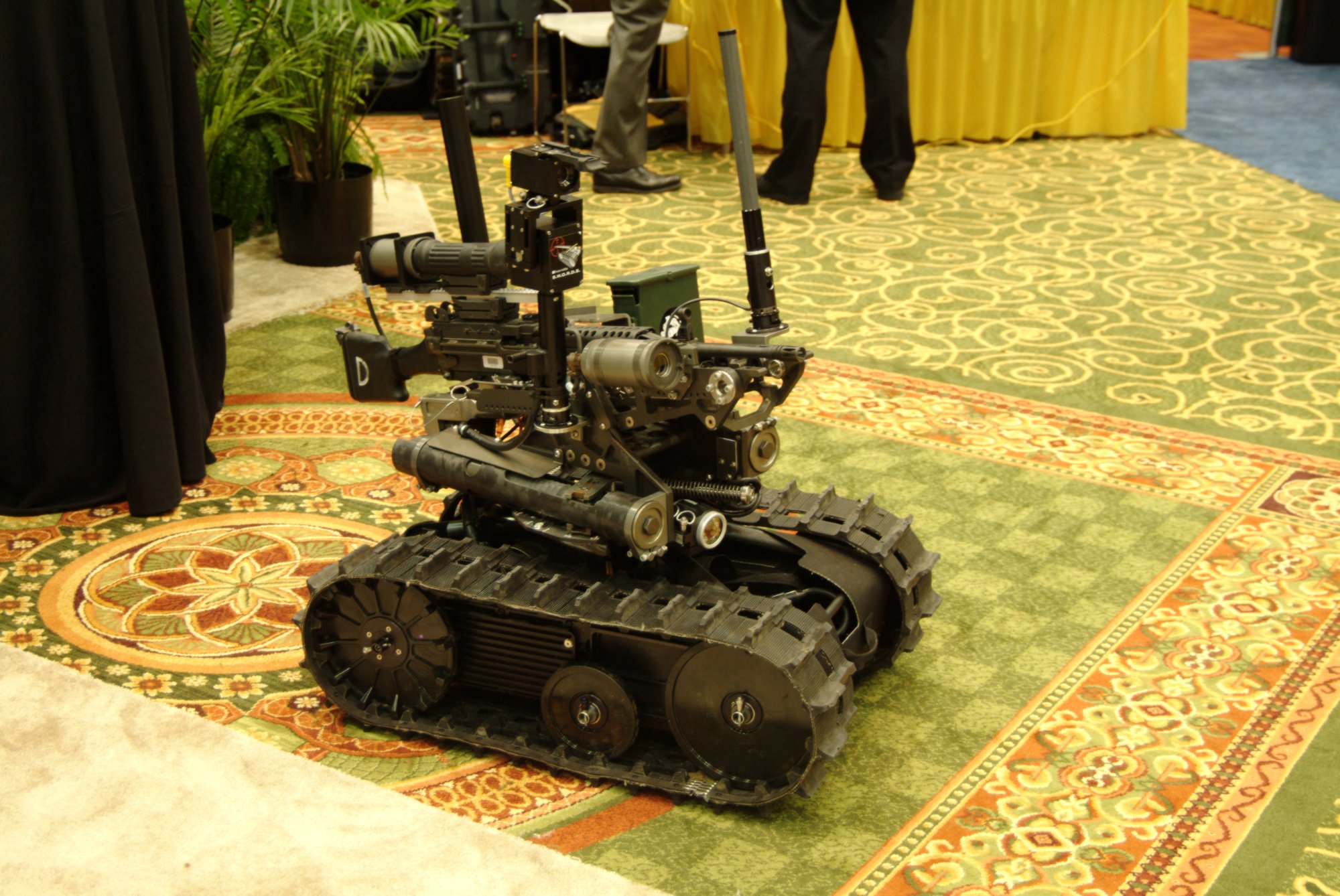 Even if a SWORDS robot/Weaponized Talon Robot UGV does get disabled/rendered inoperable by enemy insurgents, better that than a U.S. soldier or Marine getting wounded or killed. Machinery can be replaced, high dollar cost-per-unit or not, whereas people cannot. The American public, of course, is constantly informed and re-informed of this fact, now that we’re firmly entrenched in the era of the 24-hour news cycle and internet/web blogs, where every U.S. infantry combat injury and death is reported virtually as it happens, so nothing really gets past the public, in this regard.

So, if SWORDS proves to be successful/effective on the battlefield, it will most likely also help the U.S. military in its public relations (PR) war against the bulk of the mainstream television and print news media that it’s been forced to fight alongside the actual war/ongoing counterinsurgency operations. Right now, U.S. military casualty rate mitigation is the name of the game. If you can increase soldier lethality/force lethality while simultaneously increasing soldier survivability/force survivability–all the better. Engage and neutralize as many enemy combatants/insurgents/terrorists as possible while keeping our military infantry forces out of harm’s way, as much as possible, and augment and enhance the lethality of our infantry forces already in harm’s way, on the ground. Ultimately, the U.S. military wants to create an overwhelming force advantage for our infantry forces, similar to what we currently enjoy in the air and at sea. That’s what the Foster-Miller armed/weaponized Talon robot/SWORDS robot/unmanned ground vehicle is specifically, and ultimately, designed and developed to do.

However, even if dollars were the Army’s and Marine Corps’ only consideration, SWORDS, if successful, could still prove to be very valuable since it’s possible that it could save the U.S. military, and thus the U.S. tax-payers, a sizable amount of money in medical treatment and rehabilitation costs for wounded infantry soldiers and Marines. If an infantry soldier/Marine is severely wounded and requires surgery, along with months or years of rehabilitation, those financial costs can be astronomical, above and beyond the significant and even more important human cost. Central nervous system (CNS) and major organ injuries are particularly costly.
So, DefenseReview hopes that SWORDS is successful in its mission(s), once it lands in the Sandbox. We’ll just have to wait and see how it does, over there.
Just so the reader is aware, the U.S. Army had scheduled a media demonstration (or "media opportunity") of these weaponized Talon robots/SWORDS UGVs at Picatinny Arsenal, NJ for March 1st, 2005. That demonstration was cancelled by the Army "due to logistics issues". 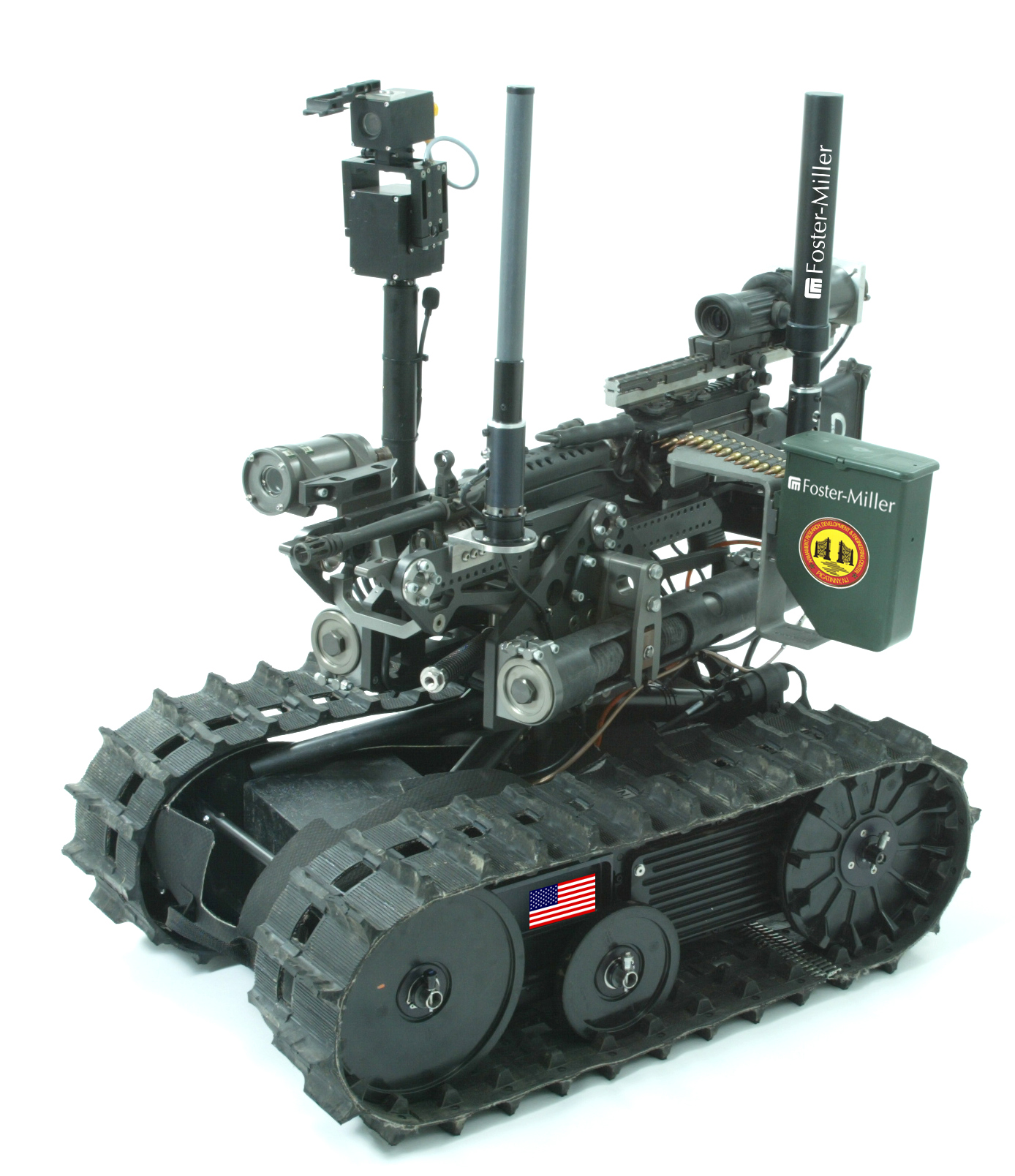 David Crane started publishing online in 2001. Since that time, governments, military organizations, Special Operators (i.e. professional trigger pullers), agencies, and civilian tactical shooters the world over have come to depend on Defense Review as the authoritative source of news and information on "the latest and greatest" in the field of military defense and tactical technology and hardware, including tactical firearms, ammunition, equipment, gear, and training.
Previous Trident Concepts Combative Carbine and Pistol, and Shooting on the Move-Carbine
Next V-RAMBO ‘Wrist Video’ System Puts Real-Time Video Right on Soldiers’ Wrists