concrete structures to dense forest to dirt playgrounds and back roads. The leading expert on CCD (Camouflage, Concealment and Deception), Lt Col. Timothy R. O’Neill (U.S. Army, Ret.) and Guy Cramer, CCD designer, teamed up to come up with TACAM.

Initially TACAM was only meant as an experimental pattern to show the U.S. Military Branches the differences between Positive Area (areas with rocks, trees and cover) and Negative Area (areas with little cover such as open fields and dirt roads) style camouflages and how coloration techniques could satisfy both environmental polarities.

In simulations TACAM showed that it could cross over into both negative and positive regions while continuing to disrupt the silhouette (outline) and symmetry (internal) of the soldier in both regions.

The geometric shapes present in the pattern help blend the user into suburban and urban environments where similar lines and shadows are present.

TACAM uniforms will only be offered to trainees, instructors and graduates of the NAT2DTC and will represent those who are advanced in these counter-terrorism training and tactics.

Graduates will be encouraged to take their training back to their original organizations and in turn Instruct those teams through a Special Off Site Instructional Program (SOSIP) being developed by NAT2DTC, providing a feeder system where not only the graduates become more capable but also allowing their full tactical team increased proficiency with the latest tactics and technology. TACAM will be offered to teams that train and complete the SOSIP program.

Building upon their research TACPAT™ (Tactical Pattern™) and TACTEX™ (Tactical Texture™) are under development by the same CCD team as Suburban and Urban patterns for Civilian Law Enforcement and Military agencies. Field testing of these new patterns is expected to take place at one or more of the four planned NAT2DTC facilities."

You can reach Hyperstealth Biotechnology Corp. by phone at 604-466-7072, or via email at [email protected].

David Crane started publishing online in 2001. Since that time, governments, military organizations, Special Operators (i.e. professional trigger pullers), agencies, and civilian tactical shooters the world over have come to depend on Defense Review as the authoritative source of news and information on "the latest and greatest" in the field of military defense and tactical technology and hardware, including tactical firearms, ammunition, equipment, gear, and training.
Previous General Dynamics Receives $26.5 Million Contract for M2HB MG Overhaul Kits
Next Sidearmor Tactical OWB Holster for Kimber TLE/RL 1911 Pistol/Surefire X200 Combo 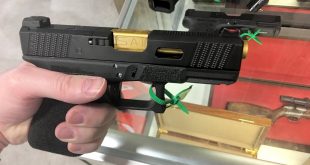