DefenseReview has received a lot of positive feedback from professional contacts of ours on the MWG 90 Rounder high-capacity snail drum magazine for AR-15/M16/M4/M4A1-type rifles and carbines. The MWG 90-Rounder holds 90 rounds of 5.56x45mm NATO (5.56mm NATO)/.223 Rem. ammunition, as its name suggests, and would appear to be a much preferred alternative to the Beta C-MAG 100-round double drum mag by the people with whom we’ve spoken. 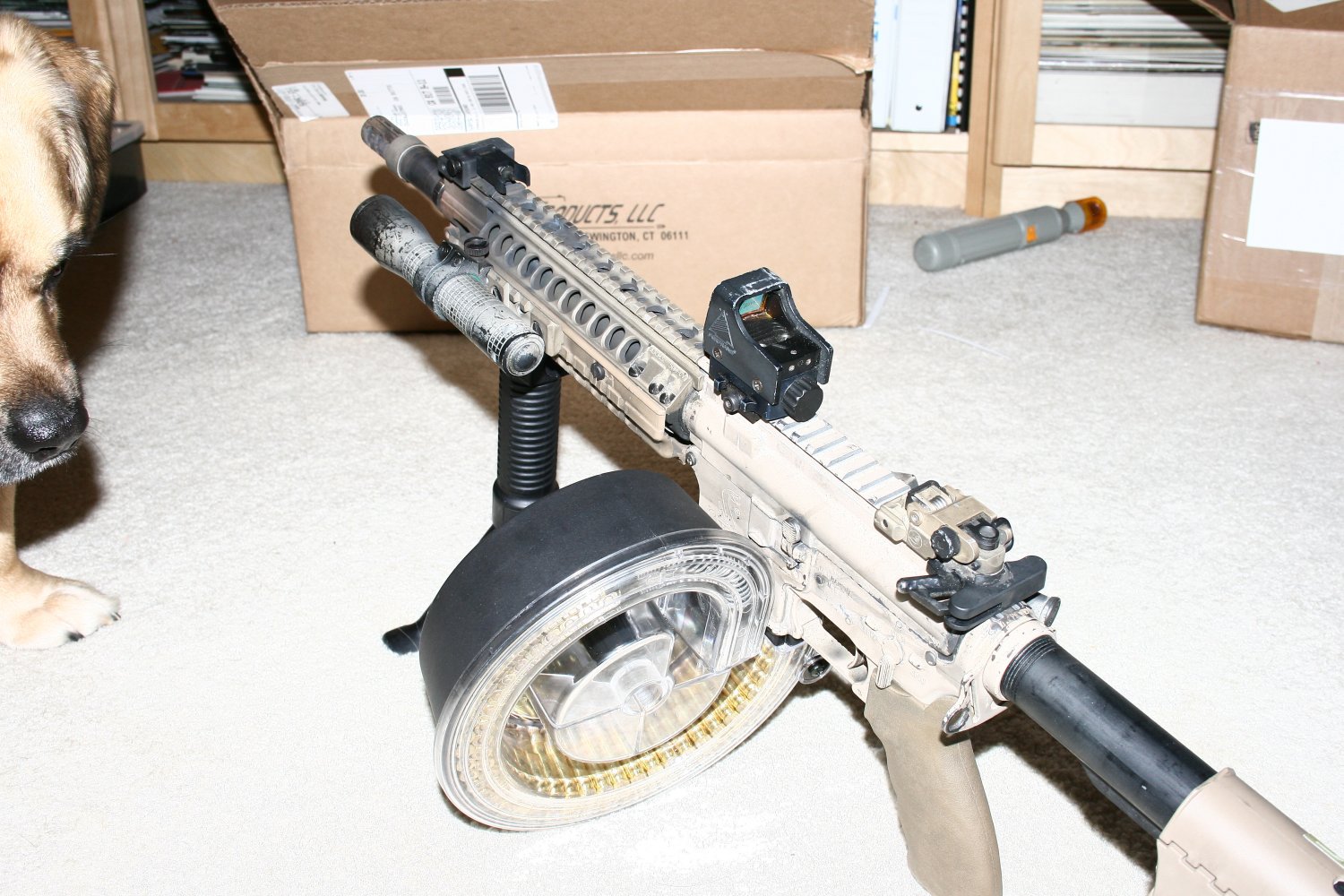 Ferdie Sy of FERFRANS Specialties has T&E’d the 90 Rounder snail drum mag to see how it performs with the select-fire FERFRANS SOAR (Special Operations Assault Carbine) direct-gas-impingement and gas piston/op-rod AR-15 SBR (Short Barreled Rifle)/subcarbine variants, and is satisfied with their performance, but he’s found that the leftward snail curve of the magazine interferes with the natural ergonomics of the weapon for righthanded shooters, as the following email (sanitized and slightly edited for readability) attests:

I tested the MWG ninety rounder Sunday and I was impressed with it. I stored the magazine with ammunition for about 3 weeks full and tested it Sunday and it was flawless with the FERFRANS SOAR piston 11.5”. I used the C-MAG before and it was not reliable. This one is. Gary tested it with a magazine full, stored it for about a year and all dusty with no issues, then he hosed it down and filled it up again and no issues. The slight issue is that the magazine is to the left of the rifle and if you are right handed, it will bother you by the joint of the elbow. You have to have the vertical foregrip and should be located towards the front of the handguard for it to have a better hold. You can not put your left elbows down while holding the rifle, it should be positioned at a horizontal because the magazine is wide. Anyway, here are some pictures.

The photos Ferdie provided to Defense Review are included with this article. 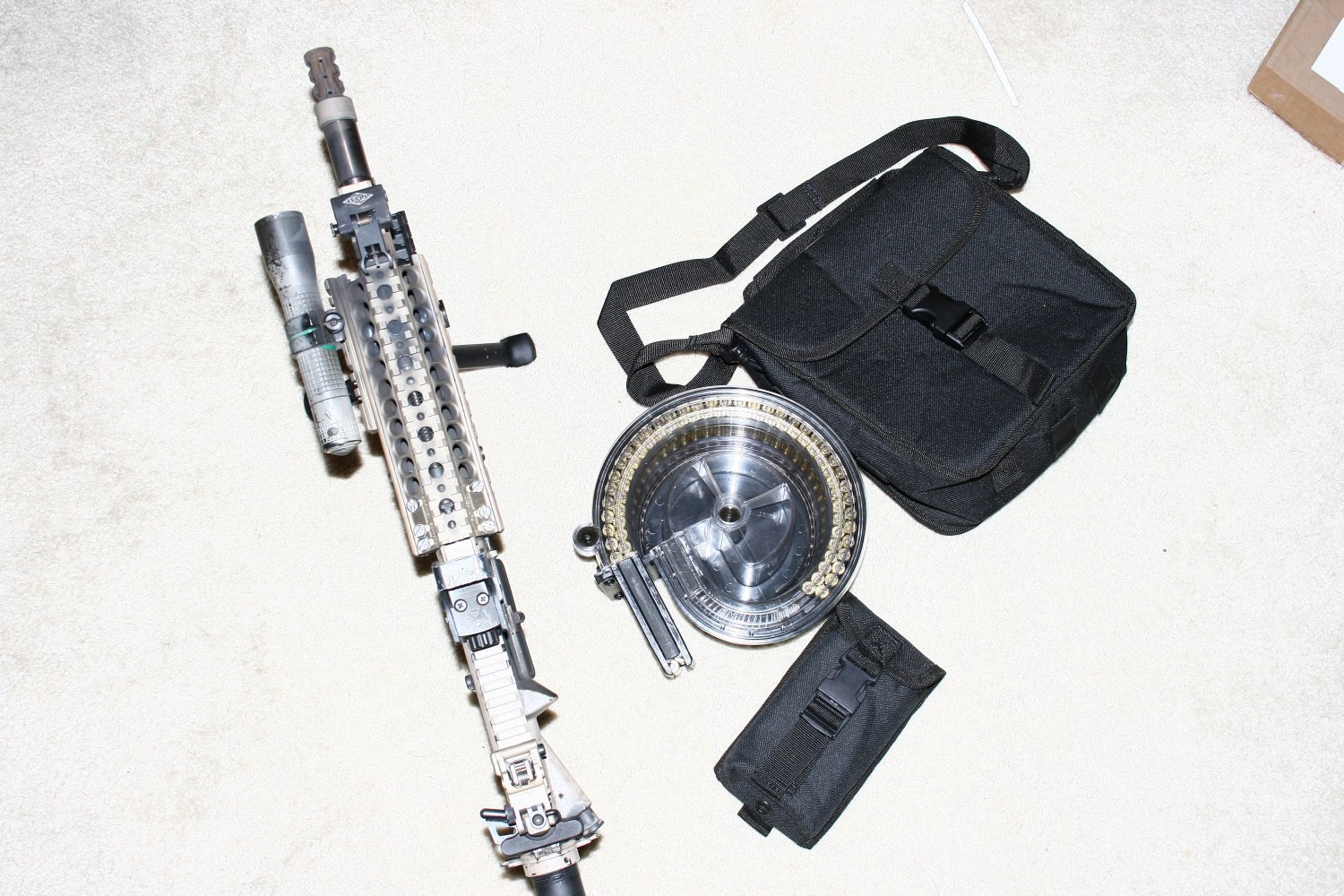 When I spoke with Ferdie by phone, I asked him if the 90 Rounder’s manufacturer, MWG Company, Inc. could reverse the snail curve on the magazine so it curved to the right (instead of to the left) so it would be more ergonomic, and thus a superior layout, for right-handed shooters, which are, after all, the majority. He replied that he didn’t know, and that I should contact Ned Scheer at MWG Co. about it. I ended up getting very busy with various projects, but I finally got around to contacting Ned, and here’s how it went (full communication below, with Ned’s response on top and my inquiry below it):

We would like to accommodate you but it would very expensive to modify, sorry. Thanks for asking.

Hope you’re well. Question: Can you modify the 90-Rounder so that the snail curl goes to the opposite side? In other words, can you reverse the direction of curve?

If you can reverse the mag, I think it will make it easier for right-handed shooters to utilize it. It will be more ergonomic when shooting and reloading the weapon.

So that, as they say, is that–at least for now. Hey, at least Ned didn’t beat around the bush.

Anyway, as my message to Ned stated, it’s my opinion that a rightward snail curve would enhance the 90-Rounder’s utility for righthanders, which comprise the majority of shooters (and warfighters). I therefore think MWG should reverse the direction of the magazine’s curve. For U.S. military use, DefenseReview would recommend that MWG make that modification, and that the military fund the modification expenditure. Lefthanded shooters should be the ones who have to adapt to a rightward snail curve, not the other way around, since they’re in the minority.

U.S. Army Lt. Mike Sparks of the 1st Tactical Studies Group (Airborne)’s Combat Reform Group (CRG) and the Air-Mech-Strike Study Group (AMSSG, also written AMS-SG), and author of the book Air-Mech-Strike: Asymmetric Maneuver Warfare for the 21st Century (highly-recommended reading, by the way), is a proponent of the MWG 90-Rounder hi-cap snail drum mag for infantry combat/warfare applications, particularly at the beginning of an engagement or assault. Mike assisted in creating the SKEDCO Assault Pack specifically for infantry warfighters who might want to employ the 90-Rounder in combat, and he posted some videos on the MWG 90 Rounder/SKEDCO Assault Pack combo on YouTube:

The MWG 90-Rounder is made from “advanced space age materials” like high-grade polymers (high-tech plastics), and features a translucent polymer backing, which provides a “see-through” window for the operator to monitor his immediate ammo supply in the weapon. It was designed be “completely reliable, and to require little-to-no maintenance at the operator level. To aid in reliability, the 90 Rounder incorporates a pre-installed, permanent layer of silver-gray Teflon lubricant powder, which should never be removed. No other lubrication is necessary, and oil-based lubricants are strictly prohibited. The magazine can be stored partially loaded for extended periods of time, but you should never store it with more than 80 rounds loaded. You should also never load the 90-Rounder with mor than 90 rounds of ammo, as it can damag the springs.

Stripper clips can be used to load the 90-Rounder, which comes equipped with a loading chute and plunger for easy and fast loading.

DefenseReview would like to test the 90-Rounder for ourselves, so we can write about our own experiences with it. We’ll try to get our hands on a couple of them.

David Crane started publishing online in 2001. Since that time, governments, military organizations, Special Operators (i.e. professional trigger pullers), agencies, and civilian tactical shooters the world over have come to depend on Defense Review as the authoritative source of news and information on "the latest and greatest" in the field of military defense and tactical technology and hardware, including tactical firearms, ammunition, equipment, gear, and training.
Previous Will Future U.S. Military Submarines Be Invisible to Enemy Sonar Detection?: Enter Acoustic Metamaterial Cloaking Tech
Next Ammunition