FERFRANS Specialties, manufacturer of the select-fire FERFRANS SOAR series AR-platform 5.56mm NATO/.223 Rem. weapons and new Fast Acquisition Sight (FAS) combat optic, is developing a semi-drop-in gas-piston/op-rod system for AR-15/M16-variant carbines and subcarbines/SBRs (Short-Barreled Rifles). In fact, the company has sent us photos of a prototype 6" test weapon (displayed below) and a low-res video clip of the same weapon being test-fired at the range (link provided below). A higher-resolution video clip is supposed to be on the way to us.

The FERFRANS semi-drop-in piston/op-rod system is based on the Taiwanese gas piston system utilized in the Taiwanese Type 65 (T65), Type 86 (T86) and Type 91 (T91) series assault rifles and carbines. However, according to the company, the FERFRANS system is a modified/updated/upgraded and product-improved version of the Taiwanese system. The reason it’s called a "semi"-drop-in system is that it does require some initial gunsmithing to install the FERFRANS piston/op-rod system to the weapon properly. However, once that initial gunsmithing work is done, from then on, the end-user can easily and continuously convert the weapon back and forth between direct-gas-impingement (i.e. standard gas tube) and the gas piston/op-rod system, as the mission/situation requires. In other words, after the initial gunsmithing work is performed on the weapon, the FERFRANS piston system becomes a true drop-in system for that weapon.

As of this writing, FERFRANS has over 15,000 rounds through a… 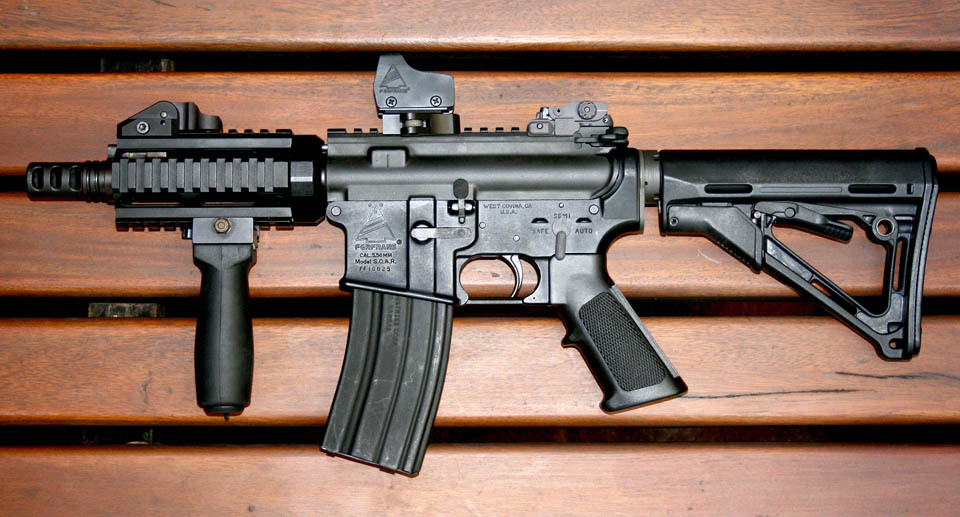 test weapon outfitted with a prototype FERFRANS gas-piston/op-rod system with zero malfunctions. That said, FERFRANS wants to put a minimum of 50,000 rounds through the test weapon with zero malfunctions before they go into production on it. Basically, they want to make sure the system is "bullet-proof", and able to take the punishment of combat conditions (weapon impacts, etc.), including adverse environmental conditions (dirt, mud, sand, etc.).

And, as it happens, Defense Review has received some photos of a prototype FERFRANS gas-piston/op-rod-driven PDW-sized select-fire SBR (Short-Barreled Rifle) with a 6-inch (6") barrel, as well as a low-res video clip of the weapon in action. FERFRANS built the 6"-barreled gas piston gun just to demonstrate that the system will still work reliably with a barrel that short. The weapon is chambered in 5.56x45mm NATO/.223 Rem., and employs FERFRANS’ proprietary mechanical cyclic rate reducer. FERFRANS has informed DefenseReview that the FERFRANS PDW 6" 5.56 SBR is reliable, but we haven’t yet tested the weapon and thus confirmed it ourselves, yet. FERRANS 10.5" and 11.5"-barreled guns run at approx. 627 RPM (Rounds Per Minute), so we’re guessing that the 6" piston-driven PDW runs at a similar rate, somewhere between 600 and 650 RPM. However, we haven’t confirmed/verified this, yet. We’ll try to find out. 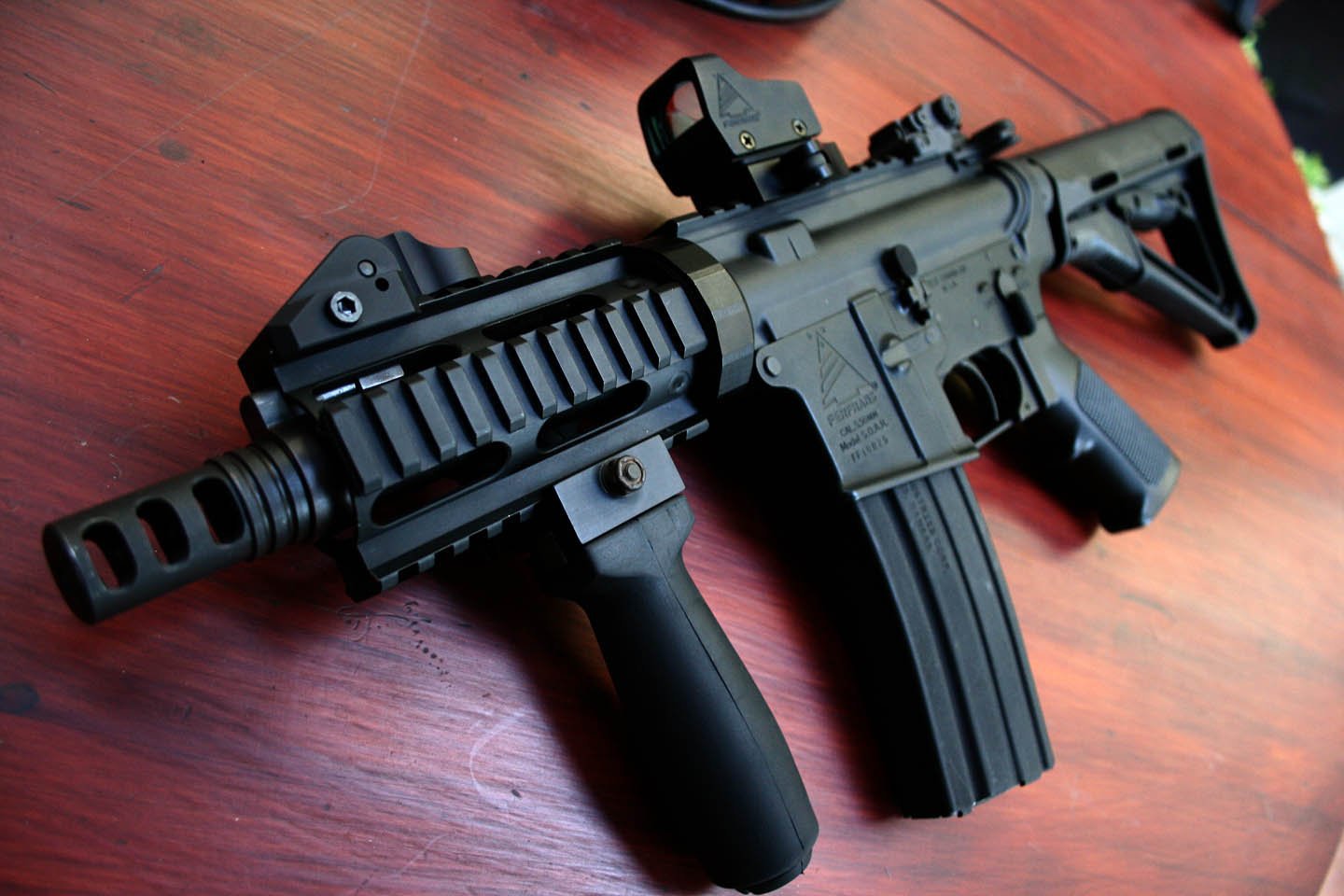 It’s DefenseReview’s opinion that at 6-inch barrel is probably unnecessarily short, except perhaps when you need ultra-concealability under clothing. Six (6) inches is too short to generate the necessary velocity required (conventional wisdom has it at 2500+ FPS) to obtain adequate lethality with standard 62-grain M855 ball 5.56x45mm NATO/.223 Rem. ammo. If a lighter bullet and special fast-burning powder is used, it’s possible that a 6-inch 5.56 gun could generate 2500+ FPS velocities, but we haven’t seen this done, yet.

Frankly, we really don’t see the need to go below the 8.5-12.5-inch barrel envelope for concealability and vehicle deployment / vehicle operations like personal security detail (PSD) (i.e. executive protection) and convoy security operations. Fortunately, FERFRANS will be offering select-fire piston-driven SBRs in this barrel-length envelope (8.5-12.5 inches) in 2008. They’ll also be able to offer 16-inch (16") piston-driven carbines, if the end-user requires it.

On a side note, DefenseReview believes that the M2 Corporation (M2 Corp.) M16SP SBR/subcarbine was able to generate 2500+ FPS with ammunition that employed a special fast-burning powder. We don’t know the grain weight of the bullet, however. We’re guessing it was 55 grains or lighter, but we’re not sure about this.

Video Clip Downloading/Viewing Instructions: Right-click on the link below, and then click on "Save Link As" (Mozilla Firefox) or "Save Target As" (Microsoft Internet Explorer) to download and view the video clip: 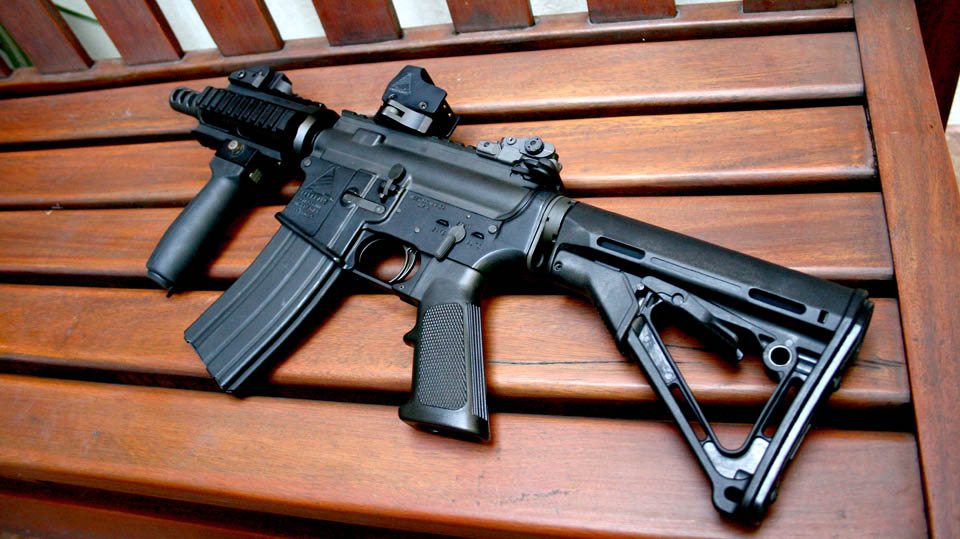 David Crane started publishing online in 2001. Since that time, governments, military organizations, Special Operators (i.e. professional trigger pullers), agencies, and civilian tactical shooters the world over have come to depend on Defense Review as the authoritative source of news and information on "the latest and greatest" in the field of military defense and tactical technology and hardware, including tactical firearms, ammunition, equipment, gear, and training.
Previous POF P-415 Gas Piston/Op-Rod-Driven Tactical AR Carbine: Real Low Maintenance
Next Pinnacle Armor Files Federal Lawsuit Against DOJ and NIJ: The Plot Thickens… 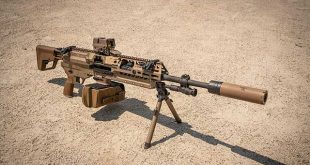