On March 17th, 2005, it was announced that iRobot (headquartered in Burlington, MA) has won an $18.4 million Naval Sea Systems Command (NAVSEA) contract to provide 150 of its PackBot EOD Hazardous Duty Mobile Robots to the U.S. Navy by the end of 2005 for the purpose of explosive ordanced disposal operations. These robots, already battle-proven/combat-proven in Iraq and Stan (Afghanistan), are going to be rapidly deployed wherever they’re needed to assist U.S. infantry forces.

To do it’s job, the PackBot EOD relies on its unique… 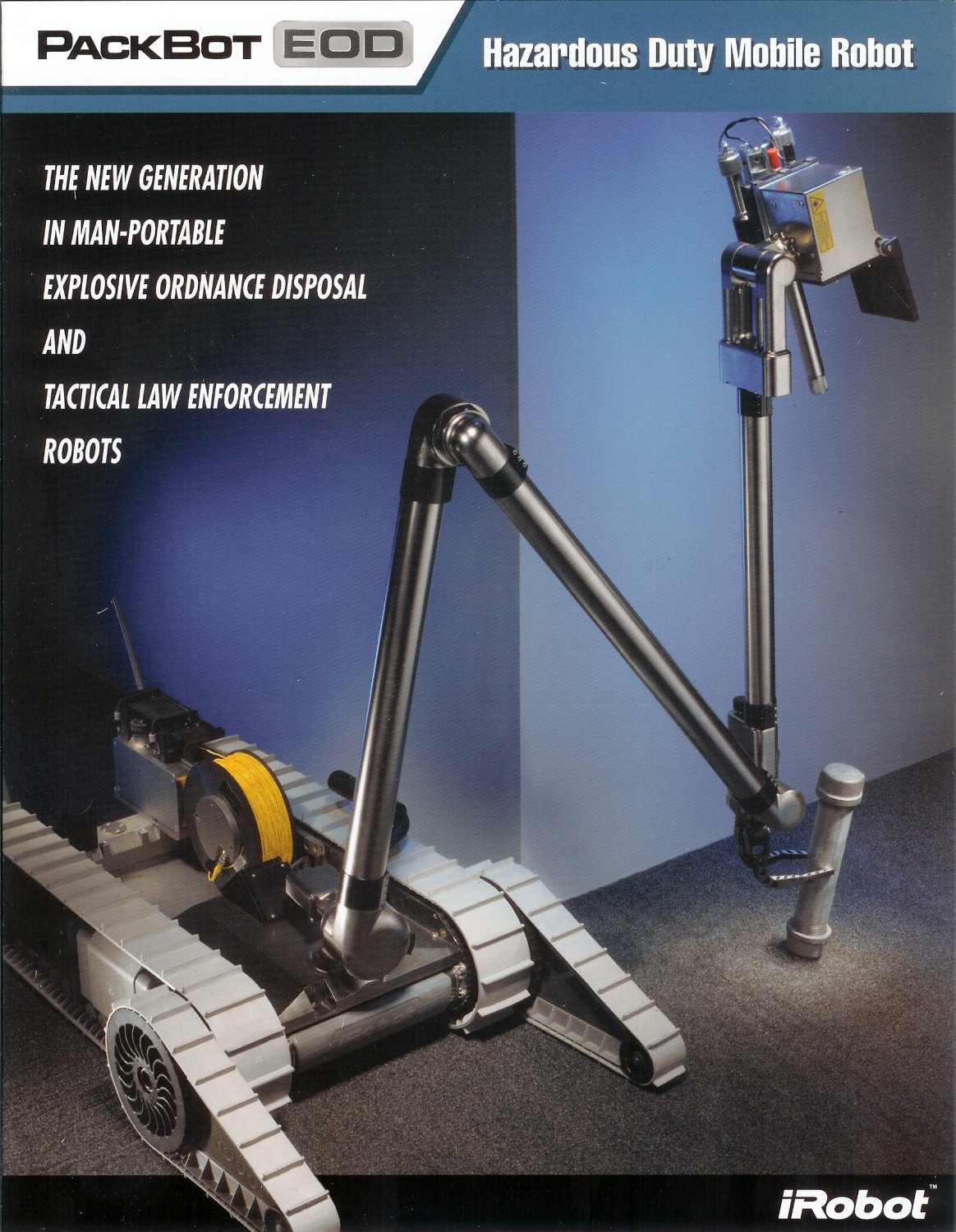 OmniReach Manipulator System with Automatic Pose Control. According to iRobot company literature, “this long-reach, 3-link manipulator system gives users a wide range of motion and extends to a full two meters. Once near the target, the robot can automatically position its camera for the best possible angle (“pose”) so the operator gets the best look at the target. The arm is fully sealed and features all-internal cabling for reliable operation in all-weather conditions. Attached to this OmniReach Manipulator System is a “posable” rotating pan-and-tilt “vision and targeting head” featuring a high-powered 300x zoom camera with bright LED illumination, as well as a rotating gripper capable of rotating 360 degrees and precisely targeting, placing, and firing disruptors. The robot’s ruggedized Operator Control Unit (remote control system is designed ergonomically with “intuitive controls for optimum mission success”.

The PackBot EOD is essentially just the bomb-disposal version of the iRobot PackBot Scout Tactical Mobile Robot, which DefenseReview got a chance to view at the 24th Army Science Conference (ASC 2004) late last year. So, it also utilizes the same trademark tracked QuickFlip dual rotating flippers as the PackBot Scout, which allow all members of the PackBot family to climb stairs and curbs, traverse uneven terrain, maneuver over rocks, rubble and debris, “navigate narrow twisting, passages”, and generally keep going over most battlefield environments (with regards to mobility) by performing a self-righting maneuver consisting of a 360-degree rotation. These Quickflip flippers remain in stowed position until they’re needed.

A quick word on the iRobot PackBot family’s track system: The tracks themselves are made out of a rugged, flexible polymer material, and have been trademarked as “ToughTrac”. According to iRobot’s brochure on the PacBot EOD Hazardous Duty Mobile Robot, “the robot’s flexible ToughTrac polymer tracks can eject debris and meaneuver over any surface–from tiled floor to snow and mud–with ‘human-like’ dexterity, quickly positioning its payloads for optimum mission success. This all-weather, all-terrain robgot goes virtually anywhere.” 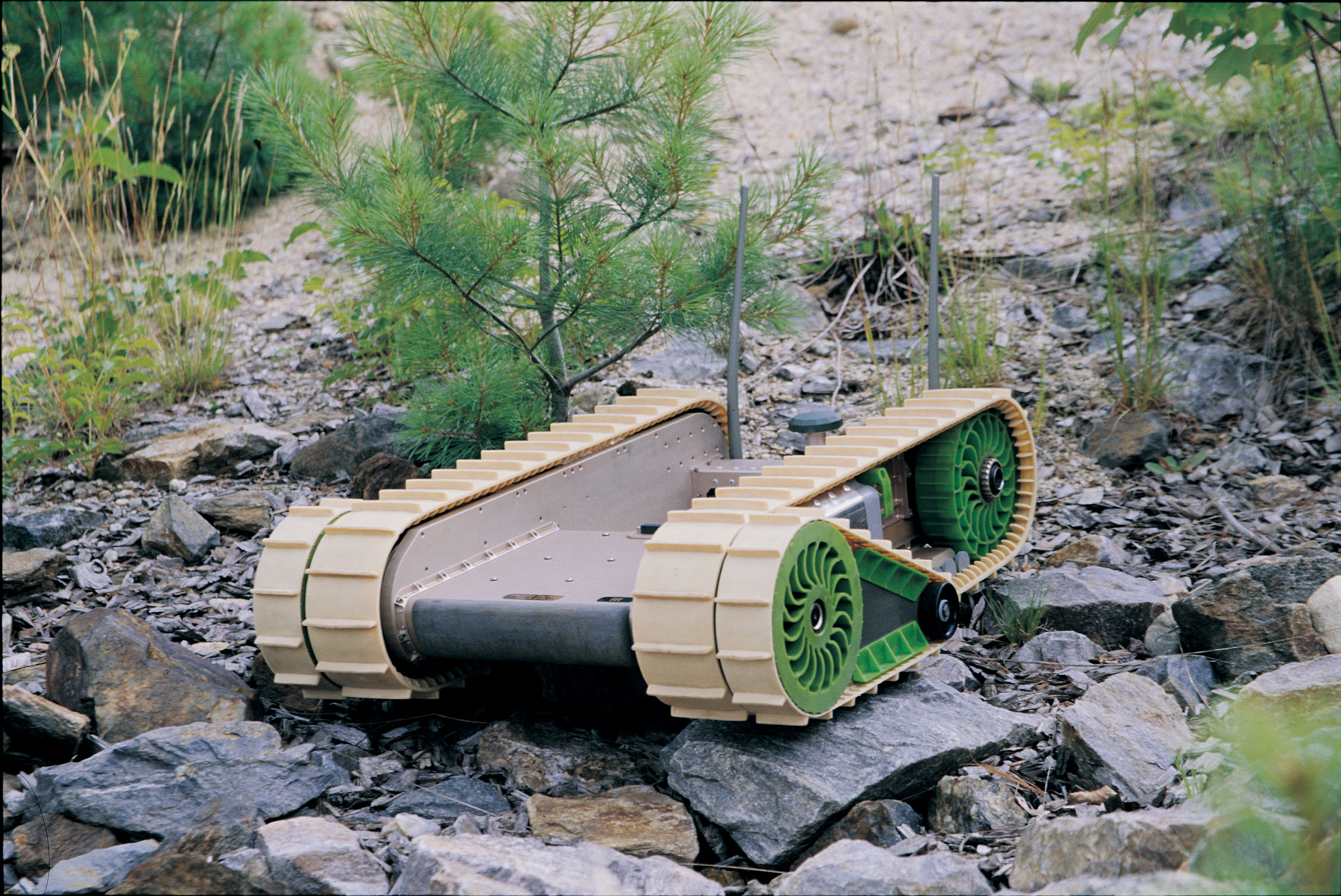 The reason Defense Review focuses on this tracked element of the iRobot PackBot family is because we’re interested in how this method of mobility (tracks) compares to a wheeled system like the U.S. Marine Corps’ (USMC) Dragon Runner Mobile Ground Sensor System reconnaissance and surveillance bot that was designed and developed by the partnership of the Carnegie Mellon Robotics Institute and the U.S. Marine Corps Warfighting Laboratory.

The PackBot Scout and Dragon Runner appear to share the same (or, at least, very similar) mission profile, so both robots are very similar in payload and purpose, otherwise. Both are fast-deployable remote-controlled mobile reconnaissance and surveillance robots (a.k.a. “mobile recon robots”, a.k.a. “mobile reconnaissance bots” or “mobile recon bots”) designed and developed to act as “point men” in 21st century urban warfare environments/operations and counterinsurgency operations. We don’t yet know which (PackBot Scout or Dragon Runner) is superior.

Just like Dragon Runner, the PackBot Scout is equipped with multiple sensors. The latter is equipped with a GPS receiver, electronic compass, absolute orientation sensors, and temperature sensors. All payload ports on the PackBot series of infantry robots is equipped with Ethernet, USB, power, and two video channels. According to the iRobot PackBot Scout Tactical Mobile Robot brochure, “PackBot’s software architecture supports multiple modes of operation rangin from basi tele-operation through full autonomy. Assist behaviors allow operators to focus on mission success instead of the robot. For example, PackBot’s intelligent power management system constantly monitors the health oand status of the batteries to ensure long mission life. And its all-digital architecture, with full data and video logging, adis in post-mission analysis.” 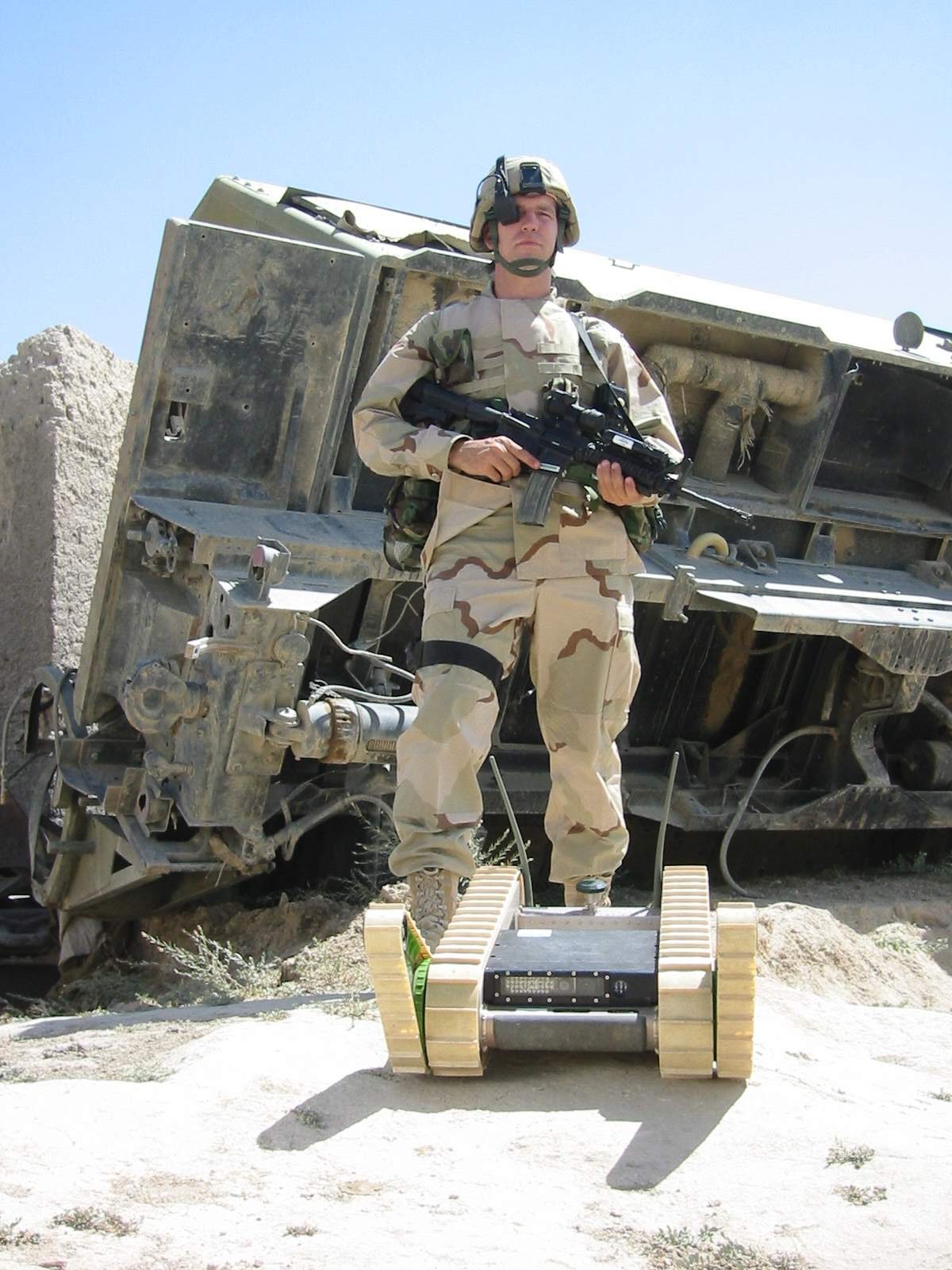 Dragon Runner is 15.5″ long, 11.25″ wide, and 5″ high, with an overall weight of 16 lbs. It’s designed to be (literally) tossed over walls, thrown out of windows, thrown down stairs, and generally abused, so it’s a highly robust ruggedized system. It can also coninue to operate if it flips over–it doesn’t matter which side is up–although it doesn’t enjoy the PackBot’s QuickFlip system, which also aids PackBot in defeating battlefield obstacles.

By adding a continuous rotating pan-and-tilt head equipped with a laser pointer, sensor suite (including audio sensors), and multiple cameras, the PackBot Scout can be transformed into the PackBot Explorer battle damage assessment robot. The PackBot Explorer is also capable of real-time target designation.

iRobot and the U.S. military are also developing a future version of PackBot called FCS SUGV for the U.S. Army’s Future Combat Systems family of systems/system of systems. According to the company, “SUGV is The Soldier’s Robot – deployed by the soldier; operated by the soldier; sensing for the soldier and weighing less than 30 pounds to minimize the risk to the soldier in hostile operations”.

The iRobot PackBot family of mobile infantry robots/unmanned ground vehicles (UGVs) would appear to compliment Foster-Miller’s line of Armed/Weaponized Talon Robot/Special Weapons Observation Reconnaissance Detection System (SWORDS) rather well, and assist in keeping US Army and Marine Corps infantry personnel out of harms way, especially in extremely dangerous urban warfare environments and on counterinsurgency operations. The PackBots can recon and surveil an area for enemy combatants and dangerous IED’s (booby traps) mines, and unexploded military ordnance, and perhaps neutralize or dispose of the explosive devices on the spot. Then, the Weaponized Talon Robots can be sent in to engage/neutralize any and all enemy insurgents their remote operators can find. Then, U.S. Army and Marine Corps (USMC) infantry soldiers can be sent in to “clean up” any remaining hostile combatants/threats.

That’s synergy. Now, if we could just equip all of our infantrymen with the V-RAMBO wrist video system (made by Tadiran Spectralink Ltd.) and sync them up with the iRobot PackBots and Foster-Miller Weaponized Talon Robots/SWORDS (Special Weapons Observation Reconnaissance Detection System)–now that would be telepresence at its current finest.

DefenseReview plans on interviewing iRobot corporate personnel at length about PackBot in the near future. One of the questions we’ll be asking them is what advantages, if any, does PackBot enjoy over Dragon Runner.

Click on the links below to view high-res digital photos of the iRobot PackBot taken at the 24th Army Science Conference (ASC 2004):

You can contact iRobot headquarters by phone at 781-345-0200, by fax at 781-345-0201, and by email at [email protected]. Colin Angle is iRobot’s CEO. Helen Greiner is iRobot’s chairman. Both are iRobot co-founders and Massachussetts Institute of Technology (MIT) graduates. Dr. Rodney Brooks, director of the MIT Computer Science Artificial Intelligence Lab (CSAIL), is also an iRobot co-founder.

Click here to read a whitepaper on PackBot titled PackBot: A Versatile Platform for Military Robotics.