On December 4th, 2009, DefenseReview published an article on the HK IAR (Infantry Automatic Rifle) candidate–a modified HK416 5.56mm assault rifle/carbine/SBR–winning a U.S. Marine Corps IAR contract. In that piece, I tried to make the point that it’s a good idea to give warfighters a carbine/SBR with machine gun-level full-auto fire capability.” Well, a few days ago, we came across an article on SNAFU! (military blog) criticizing me for supporting the IAR replacing the M249 LMG/SAW in the infantry rifle squad/team, which surprised me, because I didn’t intend to do that in my article. So, I went back and re-read it, and you know what? SNAFU! was right! My piece on the HK IAR contract award did perhaps give the impression that I supported the IAR actually replacing the LMG/SAW, instead of just augmenting/complimenting it. So, I went back in, yesterday, and edited it with the qualifying language (in bold type, so you cant miss it) that I should have used in the first place. The following are the relevant passages, post-modification:

The IAR camouflages the infantry automatic rifleman, and his ballistic capability. So, in that sense, the Infantry Automatic Rifle is a decent concept, provided it’s not actually replacing the LMG/SAW, but simply complimenting it.

So, is the Infantry Automatic Rifle (IAR) a good idea? Yes and no. It’s a good idea to give warfighters a carbine/SBR with machine gun-level full-auto fire capability, again, provided it doesn’t actually replace the LMG/SAW in the squad, but simply compliments it.

Hopefully, that’s enough to clarify my position on the USMC’s Infantry Automatic Rifle (IAR) concept. Defense Review supports the IAR concept if it’s simply going to augment/compliment the LMG/SAW in the rifle squad/team, not replace it. DefenseReview believes the Marine rifle teams should continue to use both 5.56mm NATO (5.56x45mm NATO) and 7.62mm NATO (7.62x51mm NATO) belt-fed machine guns and just add an IAR-type sustained-full-auto weapon to their arsenal. 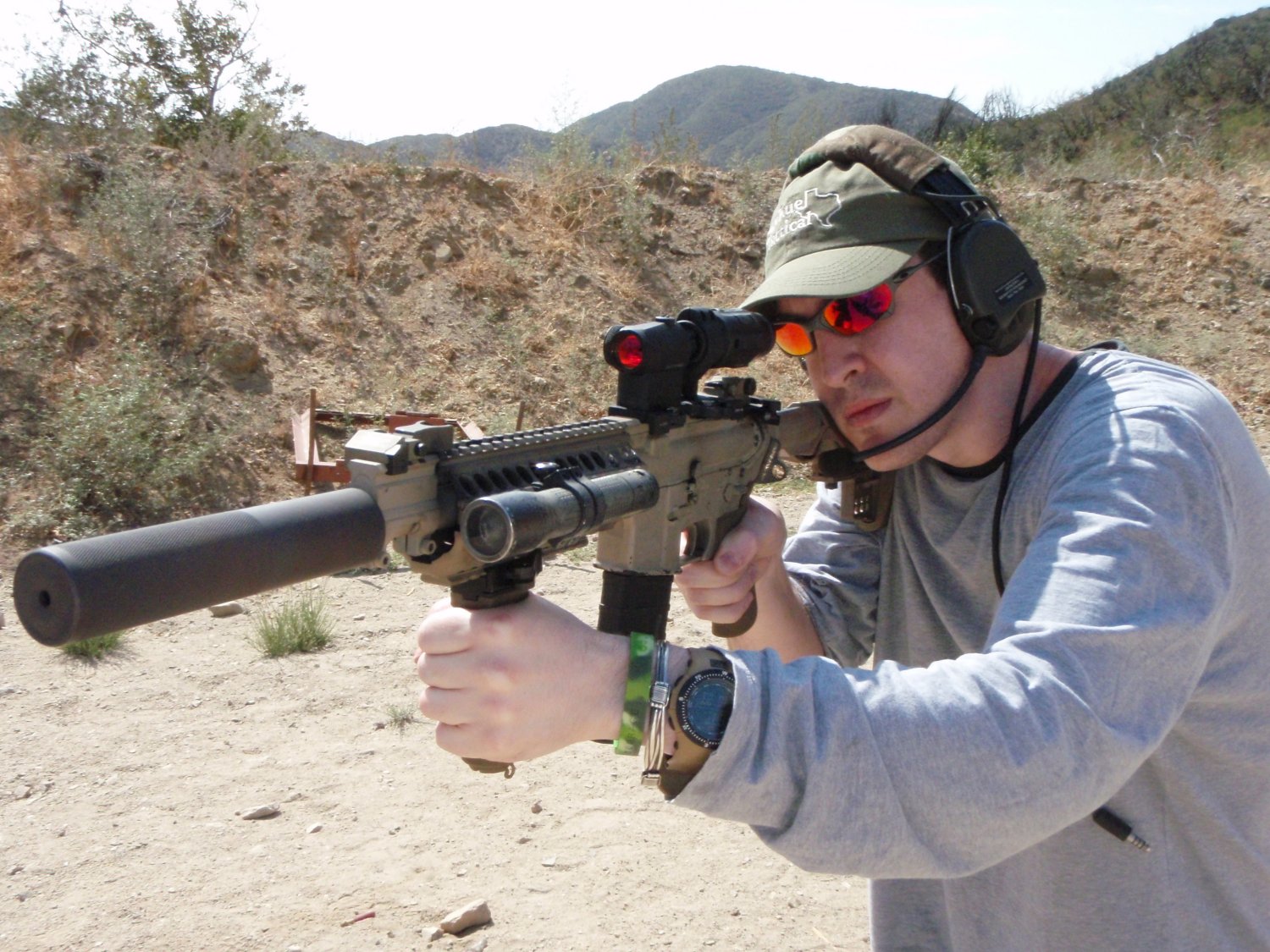 However, if it were up to us, we wouldn’t go with the HK IAR (again, just a modified HK 416). The Marine Corps is going to have to spend a lot of money on those guns. In our opinion, a more intelligent and economical solution would be to modify standard Colt M4 Carbines that are already in the inventory into IAR-type sustained-full-auto AR weapons by making some rather simple weapon mods:

We would also coat the Adams Arms piston system kit’s bolt carrier group (BCG) with FailZero’s EXO Technology metal coating (nickel-boron coating). The FailZero coating is the best self-lubricating anti-rust/corrosion coating for BCGs that DefenseReview has seen, to date. The FailZero EXO Technology coating on the bolt carrier group allows you to run a direct-gas-impingement or gas piston/op-rod AR dry (with no wet lubrication), and eases cleaning and maintenance. Our second choice coating for Adams Arms’ BCG would be either NIC Industries’ Cerakote Micro-Slick (also written “Microslick”) or IonBond Diamond Black coating, depending on which one performs better under testing.

3) Replace the standard M4 barrel with a U.S.-made/domestically manufactured 16-inch (16″) heavy “machine gun” barrel set up for the Adams Arms mid-length gas piston system and/or a 12.5″ heavy barrel to mate with Adams Arms’ standard carbine-length system, depending on the mission profile.

4) Install a free-float rail system of some type (KAC and/or Daniel Defense rails would work).

5) Install a Vltor Modstock of some type, like a Carbine/Collapsible Modstock, Enhanced Carbine Modstock (EMod), or an even newer stock, which Vltor is presently developing. 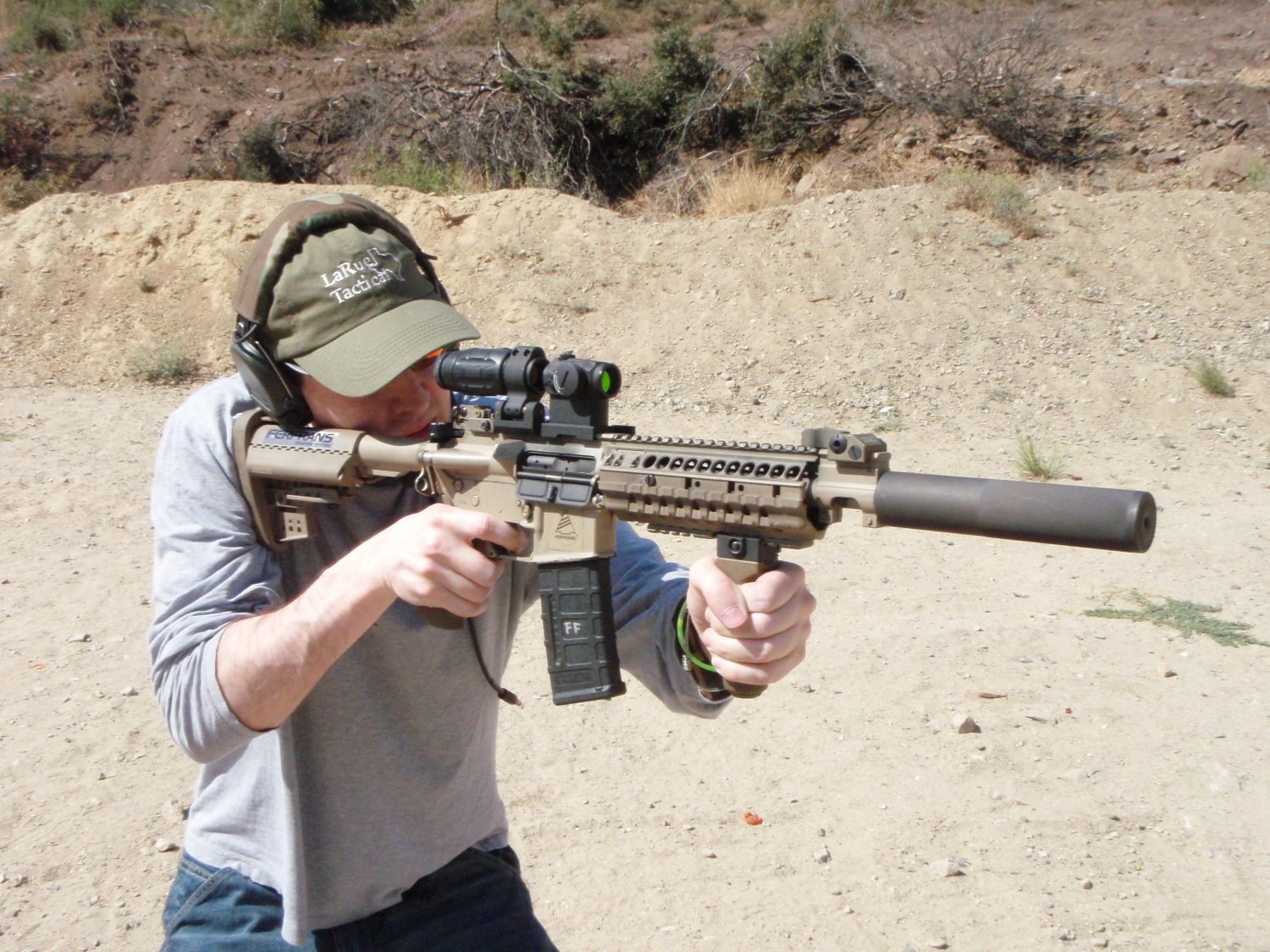 And that’s it. That’s all you’d really have to do to give any standard M4/M4A1 Carbine machine-gun-like/IAR-like capability. The heavy barrel, combined with the Ferfrans RRS, will, by themselves, give the weapon some serious full-auto/machine gun-like capability. However, if necessary, you/they could also add a heat sink to the weapon to reduce barrel and overall weapon heating and dissipate heat even more.

The reason DefenseReview recommends an Adams Arms gas piston/op-rod system/conversion kit for the IAR-type weapon conversion application is because of our correspondence with a freshly-retired SF operator and evaluator who swears by the Adams Arms piston system for military applications based on the combination of its ease of installation–it can be installed at the opeator level, using a one-page instruction sheet–and its robustness and reliability under adverse environmental (and combat) conditions and high round count on full-auto. According to him, these attributes are unmatched by any other gas piston/op-rod system that he’s tested. This SF operator (Ret.) also stressed that Colt M4A1 Carbines with the Adams Arms system/kit installed maintain adequate combat accuracy out to medium range, even if the weapons don’t quite match the accuracy of a direct-gas-impingement (DGI) a.k.a. direct-impingement gas (DI gas) system. It should be mentioned that this individual has over 200,000 rounds, to date, through the Adams Arms system, a significant portion of them on full-auto. Oh, and he’s gifting an Adarms Arms kit to one of his SF brothers for Christmas!

The FERFRANS RRS is an important element for the IAR application. By reducing the cyclic rate-of-fire below 700 RPM, not only do you enhance weapon controllability, but you also significantly reduce barrel and overall weapon heating AND thermal and kinetic stress on critical parts. The RRS also acts as an anti-bounce device, reducing or eliminating bolt bounce.

Oh, yeah, and we’d stick a Grip Pod System with light/laser module rail attachment/mount on it, too. The Grip Pod vertical foregrip/bipod/weapon stabilization system gives the operator an important additional tactical capability and advantage over standard vertical foregrips by allowing him to instantly go prone, stabilize his weapon, and fire from that stabilized position.

David Crane started publishing online in 2001. Since that time, governments, military organizations, Special Operators (i.e. professional trigger pullers), agencies, and civilian tactical shooters the world over have come to depend on Defense Review as the authoritative source of news and information on "the latest and greatest" in the field of military defense and tactical technology and hardware, including tactical firearms, ammunition, equipment, gear, and training.
Previous South Korea to Field First Man-Portable Airburst Grenade Launcher Weapon for Mobile Infantry: Meet the Daewoo K11 20mm/5.56mm Dual-Caliber Airburst Weapon
Next Merry Christmas, Happy Hanukkah, and Happy New Year from DefenseReview!