All photos contained in this article were taken by DefenseReview.com, and are copyrighted. DefenseReview.com owns the copyright on these photos. The photos were shot with an Olympus Stylus 790 SW Digital Camera which is billed as “shock-proof and waterproof”. 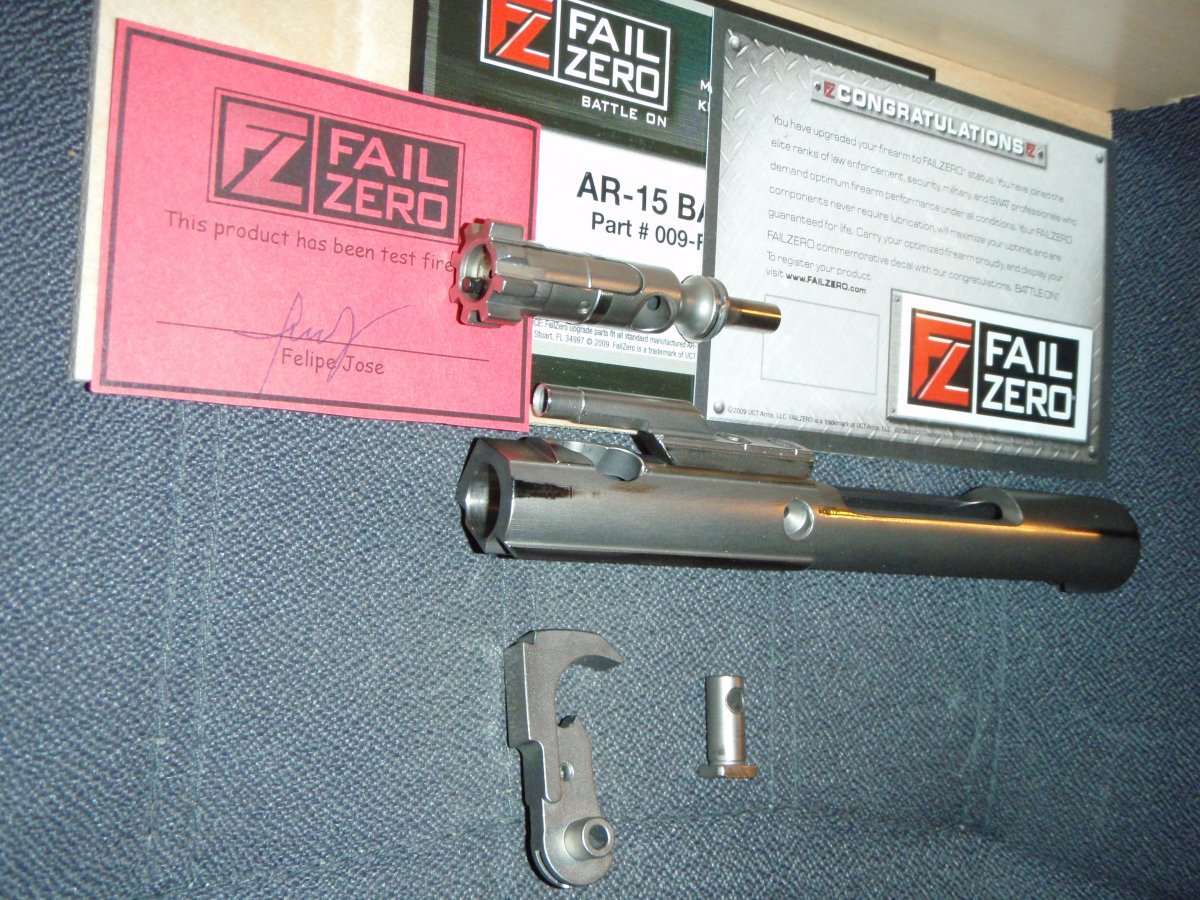 If you own a tactical AR-15 carbine (direct-gas-impingement) that you’re currently looking to upgrade, DefenseReview may just have the thing for you. We recently received a very high-grade AR-15 parts upgrade kit that we can’t wait to try out on one of our tactical AR-15 carbines. It’s called the “AR-15 Basic Kit” (Product Number 009-FZAR15-01), and it comes to us from the good folks at FailZero (FZ), which is a brand/division of UCT Coatings’ subsidiary, UCT Arms LLC.

Introduced this year at SHOT Show 2009, the FailZero “AR-15 Basic Kit was developed to significantly enhance both weapon reliability and maintainability. It consists of six critical AR-15 parts that are treated with FailZero’s/UCT Coatings’ proprietary and patented EXO Technology coating, to include Bolt, Bolt Carrier, Hammer, Extractor, Cam Pin, and Bolt Carrier Key a.k.a. Gas Key. The EXO Technology coating is a nickel-boron (Ni-B) coating. 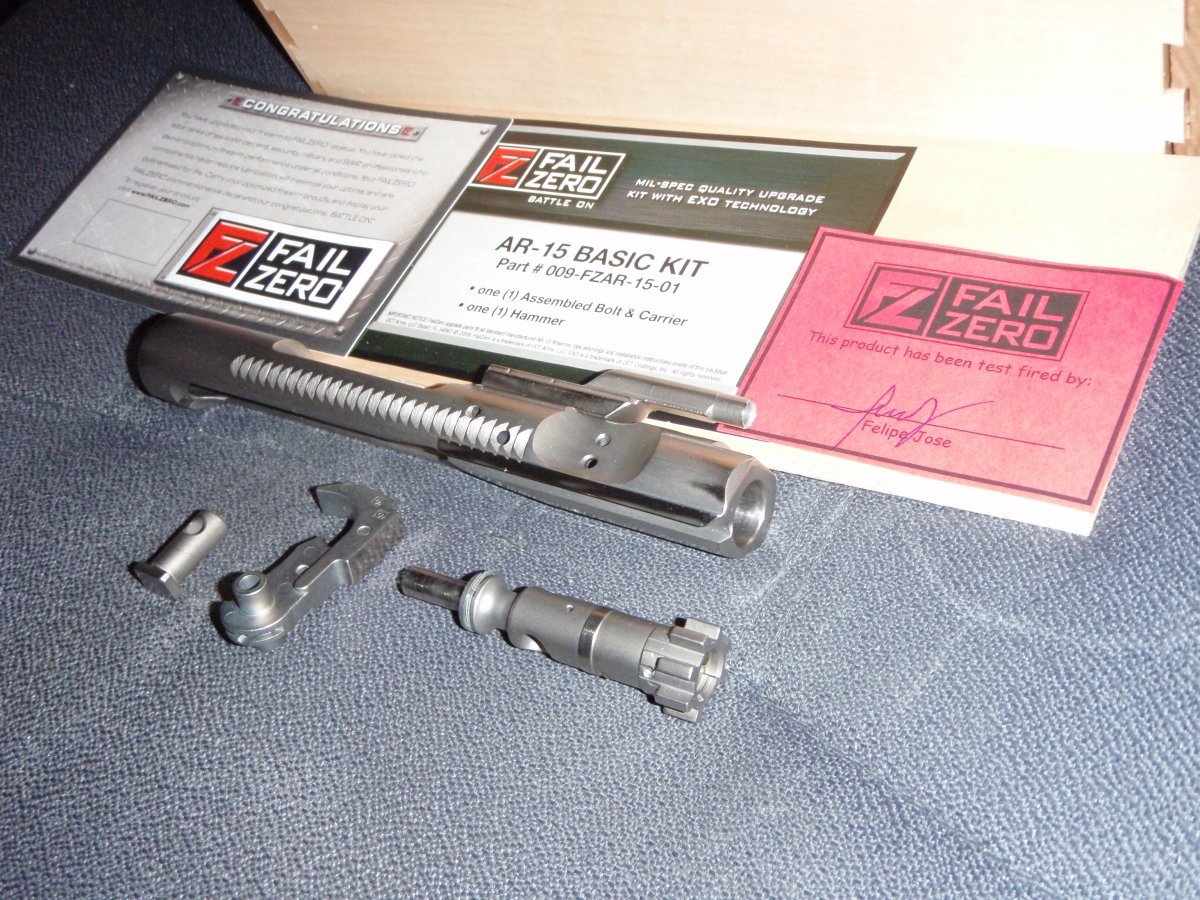 The EXO Tech coating is self-lubricating a.k.a. self-lubricitous and corrosion resistant / rust resistant, eliminating the need to lubricate these coated parts with oil or grease, and thus significantly mitigating wear and easing weapon-maintenance requirements (including cleaning). According to the Fail Zero website, the EXO Technology firearms coating creates a permanent self-lubricating / self-lubricitous surface (what the company calls “permanent dry lubricity”) that’s actually harder than the substrate material itself. It will never rub off, flake off, or cause crud build-up. The company maintains that EXO Technology’s elimination of wet-lubrication failures give the operator an “active weapon advantage” under all environmental and combat conditions, and that this claim has already been tested and proven out by EXO-Tech’s developer UCT Defense (a division of UCT Coatings) AND the U.S. Department of Defense (DoD) on AR-15s (we presume Colt M4/M4A1 Carbines), Beretta M9 pistols, and machine guns (perhaps M249 SAWs/LMGs and/or M240 MMGs/GPMGs?). 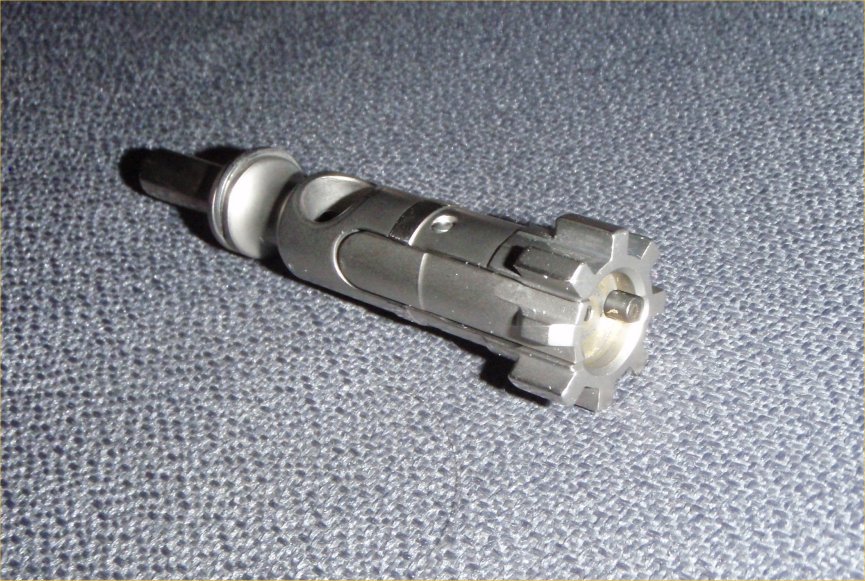 Defense Review actually has two of these kits, so we plan to send one of them to our friend and contributor Mike Pannone (a.k.a. Michael Pannone) of Viking Tactics and Mid-Atlantic Training Resources (MATR), and author of the M16/M4 Handbook (awesome book, by the way), to run (and review) on his personal AR-15 tactical carbine. Mr. Pannone is known and highly-regarded for his military operational experience, knowledge and skill (including shooting skill), his knowledge of the M4/M4A1 Carbine (and tactical AR-15 carbines and subcarbines/SBRs) specifically, and his thorough and rigorous testing procedures with regard to tactical equipment, among other things. He’s also unique in that he combines U.S. Army Special Forces (SF) experience with a forensic knowledge of M4/M4A1 Carbine (and tactical AR-15 carbine/SBR) mechanics.

Gunsmith and tactical shooting instructor Larry Vickers of Vickers Tactical is the only other person DefenseReview knows that similarly combines military Special Forces / Special Operations experience and such a high degree of forensic mechanical knowledge of the AR-15/M16 rifle / M4/M4A1 Carbine system.

Anyway, we look forward to Mike Pannone’s feedback on the kit so we can publish it for our readers. 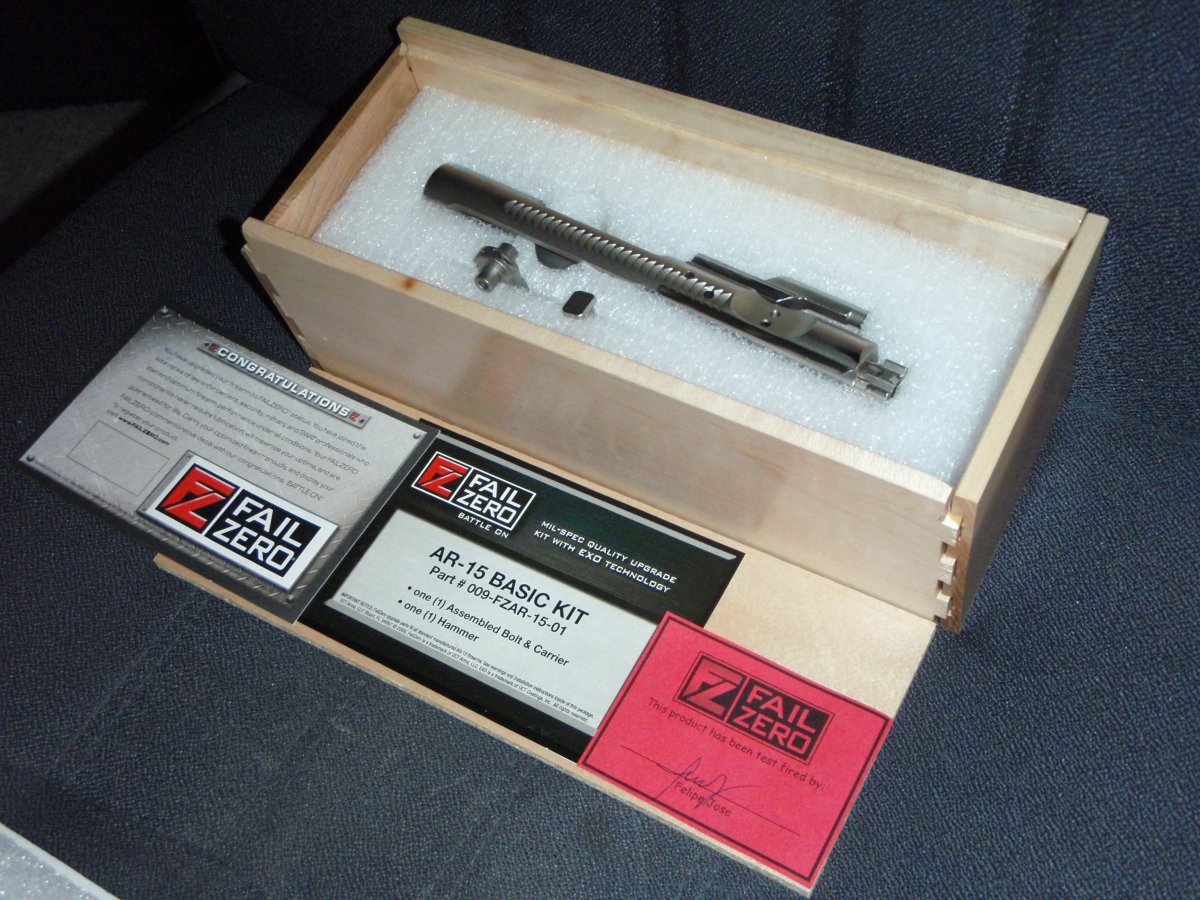 It should be noted that Fail Zero also offers an “AR-15 Extreme Duty Kit” (Product Number 009-FZAR15-02), which adds an EXO-coated A3/A4 AR-15 Upper Receiver and Charging Handle to the AR-15 Basic Kit mix. The Extreme Duty Kit doesn’t yet include an EXO-coated firing pin, but it will in the future.

Oh, and if you have a tactical 1911 pistol, you might want to check out FailZero’s “1911 Pistol Upgrade Kit” (Product Number 009-FZ1911-01), which consists of an EXO-coated Slide, Frame/Receiver, Trigger Assembly, Hammer, and Disconnector.

Editor’s Note: The above-mentioned M16/M4 Handbook by Mike Pannone is a fantastic “operational guide” on the direct-gas-impingement AR-15/M16/M4/M4A1-series weapons, and the best book of its type DefenseReview has read, to date, on the subject. If you own a tactical AR-15 carbine or rifle, you should also own this book. Period. Mil/LE tactical professionals (i.e. professional trigger-pullers) and civilian tactical shooters can greatly benefit from reading it. In our opinion, the M16/M4 Handbook is a must-have addition to any AR-15 owner’s tactical firearms library. 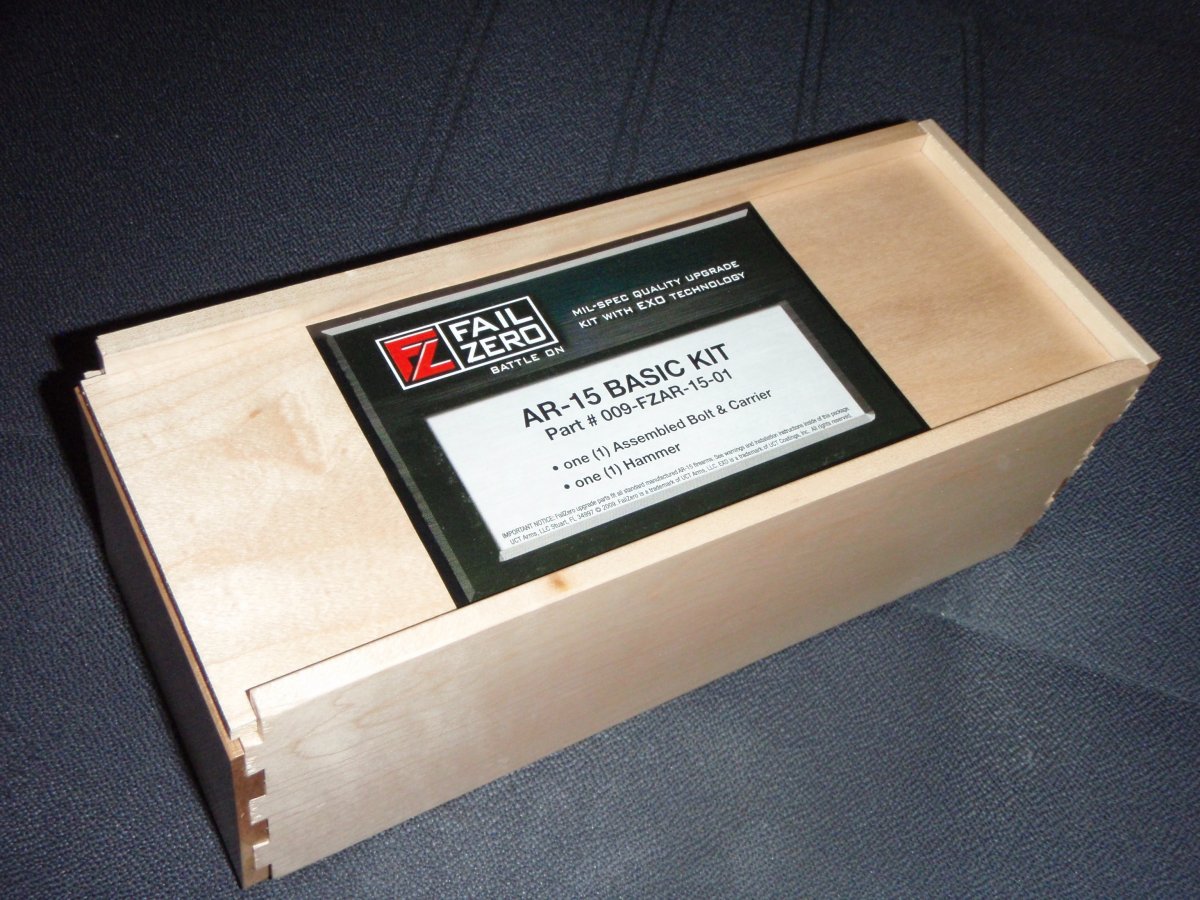