While we’re discussing Vltor Weapon Systems (VWS) products, we should probaby mention some of the other items on display at the Vltor booth, which we photographed.

First up is the Vltor MUR (Modular Upper Receiver), which our friend and Tactical 3-Gun National Champion shooter Taran Butler uses on his competition guns and describes as “raging”. In Taran-speak, that (term “raging”) means the MUR is shit-hot a.k.a. “the shit” a.k.a. “totally awesome”. In fact, the MUR AR-15 upper may very well be the… 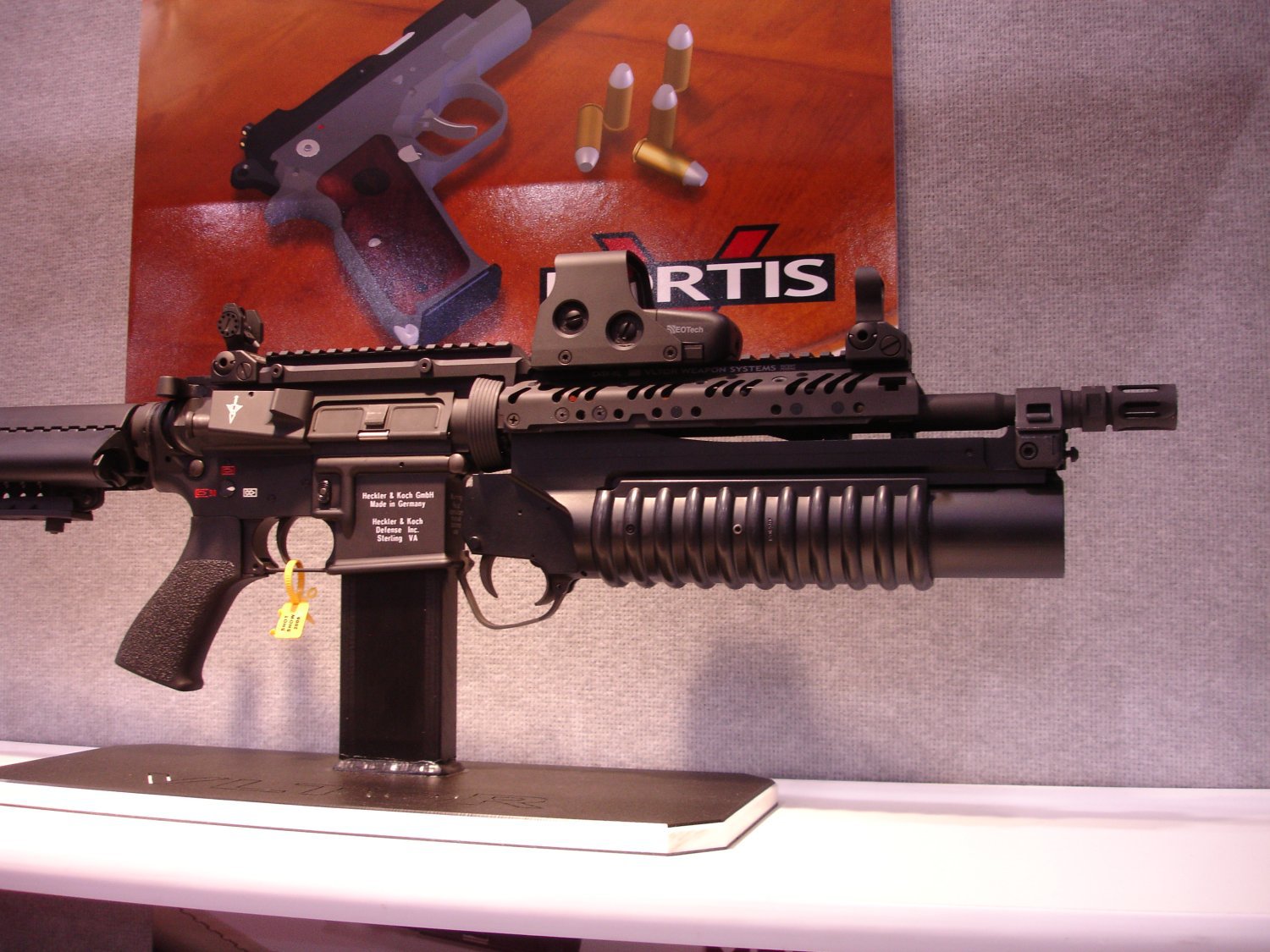 best and coolest upper receiver (AR receiver) on the market. As such, DefenseReview will be using Vltor MUR-1A uppers (upper receivers) for two tactical AR builds. The MUR-1A features both a bolt-assist and case deflector a.k.a. shell deflector, as opposed the the MUR-1S, which only has a case deflector.

Nathan Roads of Next Generation Arms (NGA) will build the guns for us. As part of the build, NGA will apply special ceramic gun coatings to both the inside and outside of the guns for longer wear, reduced friction/increased lubricity of internal parts, corrosion resistance, and ease of maintenance (i.e. easy cleaning). NGA uses a proprietary process to apply these coatings that took considerable R&D to develop and perfect.

By the way, Taran’s use and endorsement of the MUR upper can’t be overstated in importance. Taran is currently the best tactical 3-Gun shooter in the world (and probably the best 3-gun shooter, period), and he’s constantly testing and evaluating the latest and greatest weapons and components to give himself the best chance of winning, which he usually does. So, if he calls something “raging”, you should probably buy it.

Just FYI, during the recent Fort Benning 3-Gun Challenge, after the match started, Taran was suddenly forced to transfer into the open division using weapons that were set up specifically for the tactical division. Apparently, the match committee decided that Taran’s Benelli Super 90 semi-auto shotgun held one too many rounds in its tubular magazine, so, all of a sudden, he was an open-division competitor. So, Taran did the only logical thing to do–he won it. That’s right Taran won open division using his tactical-division weapons and sights. This was a rather amazing and unprecedented feat, and it perhaps reigns number one among all of Taran’s accomplishments since he started competing, and that’s saying a lot.

If you or your team would like to train with Taran Butler, you can schedule a pistol, rifle, or shotgun
(or 3-Gun Tactical) shooting class through DefenseReview. Just email us at defrev at gmail dot com.

If you’d like to see footage of the recent Ft. Benning 3-Gun Challenge match, Defense Review recommends you purchase a this Shooting USA DVD on the episode. 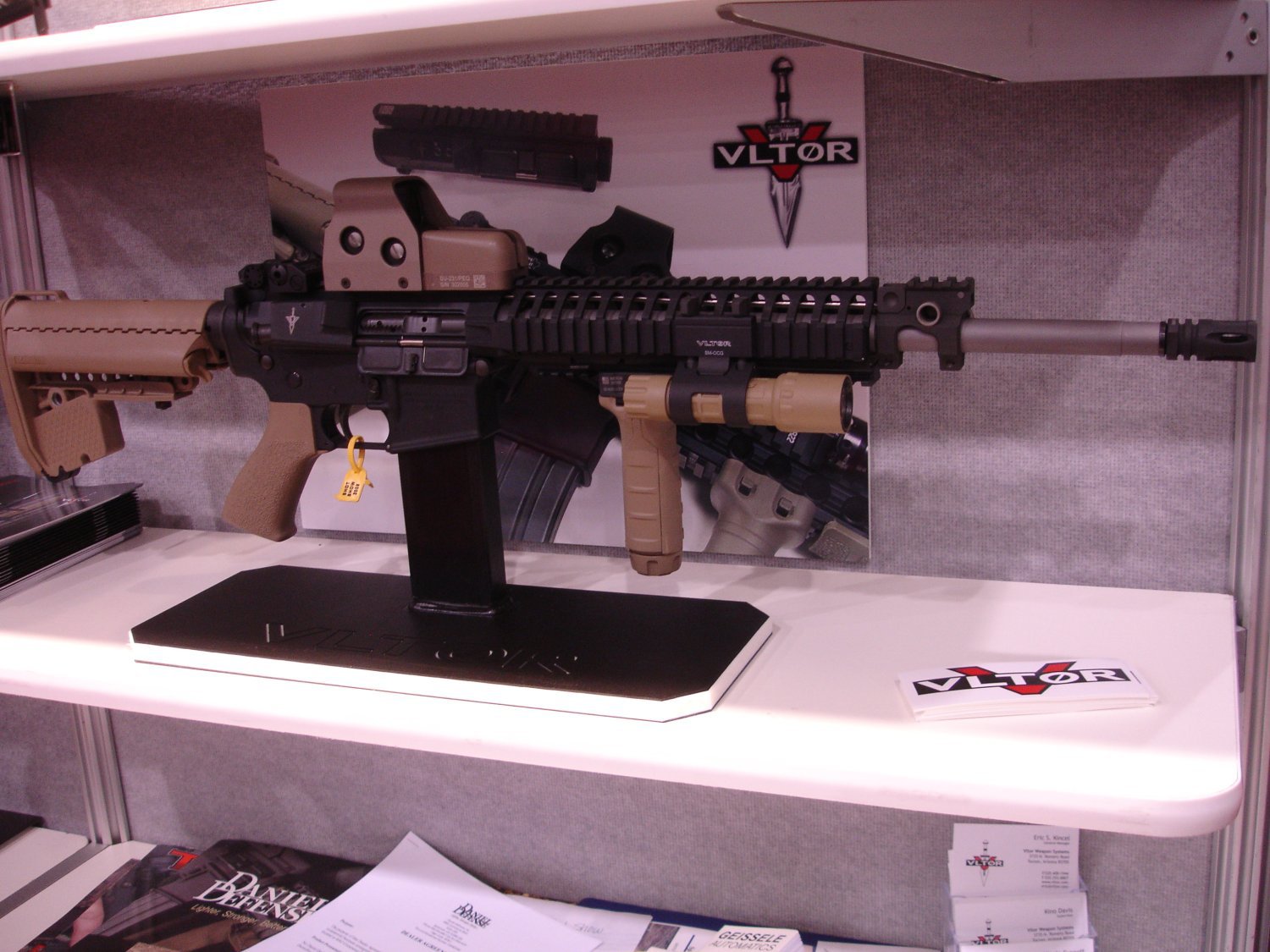 Vltor Weapon Systems blew a lot of people away with their new VIS-1 one-piece upper receiver/rail system (upper receiver with integral rail). Actually, the Vltor VIS-1 is constructed of two pieces that are bonded together in such a way that it’s virtually seamless and super-strong. No doubt, the VIS-1 will be going up against the Lewis Machine & Tool (LMT) Monolithic Rail Platform (MRP). The difference? The LMT MRP utilizes a proprietary barrel and gas tube assembly for it’s QCBS (Quick Change Barrel System), while the Vltor VIS-1 utilizes commercial off-the-shelf (COTS) AR-15/M16/M4 barrels and gas tubes. According to Vltor, the VIS-1’s quick change barrel system is similar in speed to accomplish as the LMT MRP.

The VIS-1 is a hot system, and anyone looking for a “monolithic”-type setup should definitely give it serious consideration, along with the LMT MRP, which is also excellent. By the way, the “VIS” in “VIS-1” stands for two things: 1) Versatile Interface Structure, and 2) In Latin, VIS means “force” or “to use force”. While we’re on the subject of Latin, Vltor (pronounced “Ooltor”) means “revenge”, “avenger” or “vengeance”. The “1” designation in “VIS-1” is for Vltor’s carbine series. Vltor’s mid-length series will be called VIS-2, and their rifle-length series will be designated “VIS-3”. The process Vltor uses for bonding the two pieces of the upper receiver into one piece is salt dip brazing, which utilizes a molten salt vat. According to Eric Kincel, salt dip brazing is a dying art form. It creates a one-piece unit that has the same strength and rigidity as solid piece of aluminum. The mating joint (bonded surfaces) are actually stronger than the parent metal (parent material).
A lot of top-notch tactical AR (tactical AR-15) rifle/carbine builders like Next Generation Arms, Noveske Rifleworks, and MSTN (Mid-South Tactical Network) offer VIS uppers as a build option, which speaks very highly of the product. All three outfits know what they’re doing when it comes to building high-end tactical ARs.

Third up is the Vltor CASV-EL free-float handguard/rail system, which the Vltor website describes as a “piggy-back”-mounted handguard with a removable lower handguard, which allows the user to mount an M203 40mm grenade launcher, as can be seen in the accompanying photo. The “EL” part of CASV-EL stands for “Extended Length”. The CASV-EL is made from aluminum and features stainless steel mounting hardware. It’s DefRev’s understanding that it was developed specifically for U.S. Navy EOD (Explosive Ordnance Disposal) operators to integrate with their M4/M4A1 Carbines (14.5″ barrel) and CQBR-type SBR/subcarbines with 10.3″ barrels.

Finally, there’s the Vltor Modstock family. Taran Butler uses the Enhanced Carbine Modstock (EMOD) on his tactical 3-Gun competition/match guns. The EMOD is only available in “Clubfoot” configuration, and is available for either a standard mil-spec “receiver extension tube” a.k.a. buffer tube or an aftermarket commercial buffer tube. As if that’s not enough of an endorsement, Ferdie Sy of FERFRANS uses Vltor EMODs and Carbine Modstock Kits for some of his select-fire (i.e. full-auto) SOAR SBR/Subcarbines, which he builds for Philippine Special Operations Forces (SOF) units like the Special Action Force (SAF), as well as U.S. SWAT teams.

DefenseReview recommends that our readers check out all of the products discussed in this article at the Vltor website, and seriously consider both the MUR and VIS components specifically for your next tactical AR-15 rifle, carbine, or SBR/Subcarbine build. We just don’t know enough about the CASV-EL to recommend it, yet. We’ll try to learn more about it, however.

Author’s Note: The weapons shown in both photos above sport EOTech 550-series HOLOgraphic Weapon Sights a.k.a. HOLOgraphic Diffraction Sights. DefenseReview has an EOTech 552 HWS/HDS in our tactical accessories inventory, and we love it and highly recommend it. We also have an Aimpoint CompM2 in our inventory, which we love as well. Frankly, you can’t go wrong with either EOTech or Aimpoint optical gunsights for CQB/CQC (Close Quarters Battle / Close Quarters Combat) applications. Speaking of Aimpoint optical weapons sights/combat optics, we’ll be T&E’ing the Aimpoint CompM4 and Micro-T1 optics (optical sights), and 3X Magnifier very soon.

David Crane started publishing online in 2001. Since that time, governments, military organizations, Special Operators (i.e. professional trigger pullers), agencies, and civilian tactical shooters the world over have come to depend on Defense Review as the authoritative source of news and information on "the latest and greatest" in the field of military defense and tactical technology and hardware, including tactical firearms, ammunition, equipment, gear, and training.
Previous Ultimate Survival BlastMatch / WetFire Tinder Fire-Starter Kit for Military Ops
Next AAC BLACKOUT Open-Prong Flash Hider/Suppressor for Tactical Small Arms