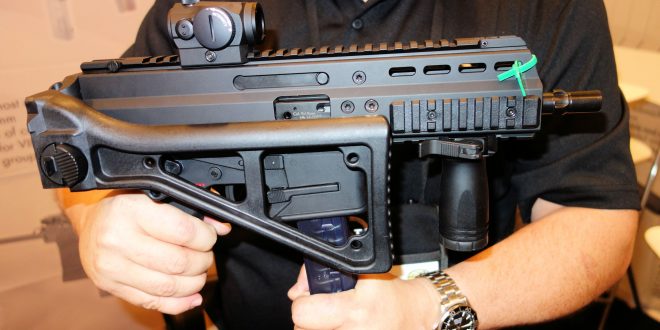 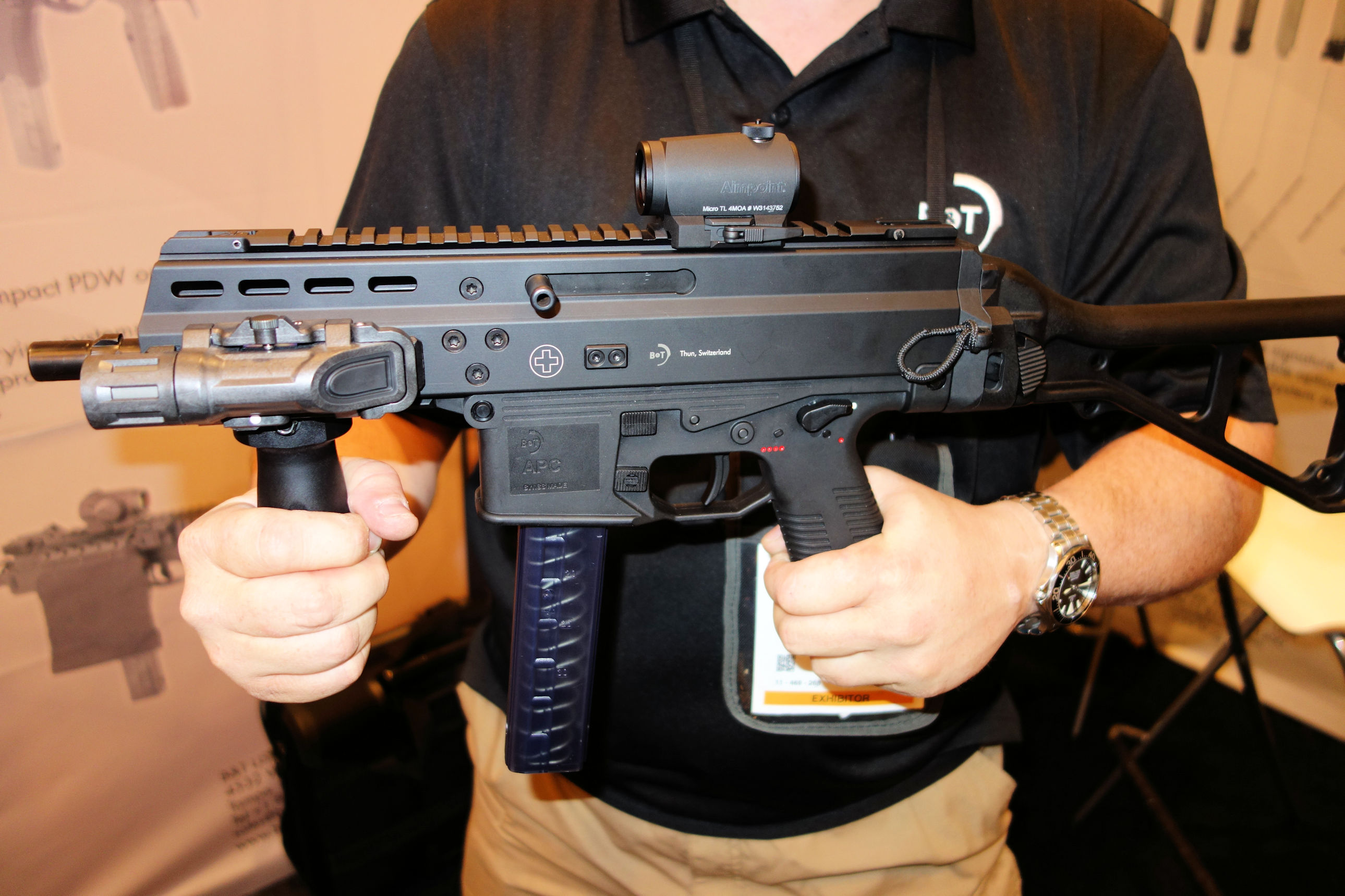 Back in early 2015, DefenseReview published a piece on the Brugger and Thomet B&T AP556 5.56mm x 45mm NATO (5.56mm NATO)/.23 Remington assault rifle/carbine/SBR (Short Barreled Rifle), and it was our understanding at the time that it would eventually be offered in the USA as a semi-auto-only 5.56 carbine for civilian tactical shooters, as well. We actually never followed up on this, so we’re going to try to do so soon. In the meantime, the B&T APC9/45 SMG (Submachine Gun) weapons packages and B&T APC9 semi-auto-only carbine and pistol variants have re-peaked our interest, even though we weren’t quite interested enough at SHOT Show 2015 to publish an article on them, even though we’d shot photos and video on the APC9 SMG and semi-auto-only istol at the show. The reason we weren’t, is that 5.56mm SBRs (suppressed and unsuppresed) have taken over most military SOF (Special Operations Forces) and law enforcement SWAT dynamic CQB/CQC ops. And, in the civilian tactical shooting world, 5.56mm carbines are much more popular than 9mm carbines.

However, with new SMG’s/carbines like the SIG SAUER SIG MPX and CZ Scorpion series, our interest in the 9mm and .45 ACP SMG weapons platform has been renewed, and that includes our interest in the B&T APC9 9mm SMG and B&T APC45 .45 ACP SMG, respectively, particularly in suppressed form. DR is also interested in the civilian-legal B&T APC9 semi-auto-only tactical carbine and pistol are actually offered, and a B&T APC45 semi-auto-only carbine is developed, for home defense and recreational shooting. We’ll check on that, too. 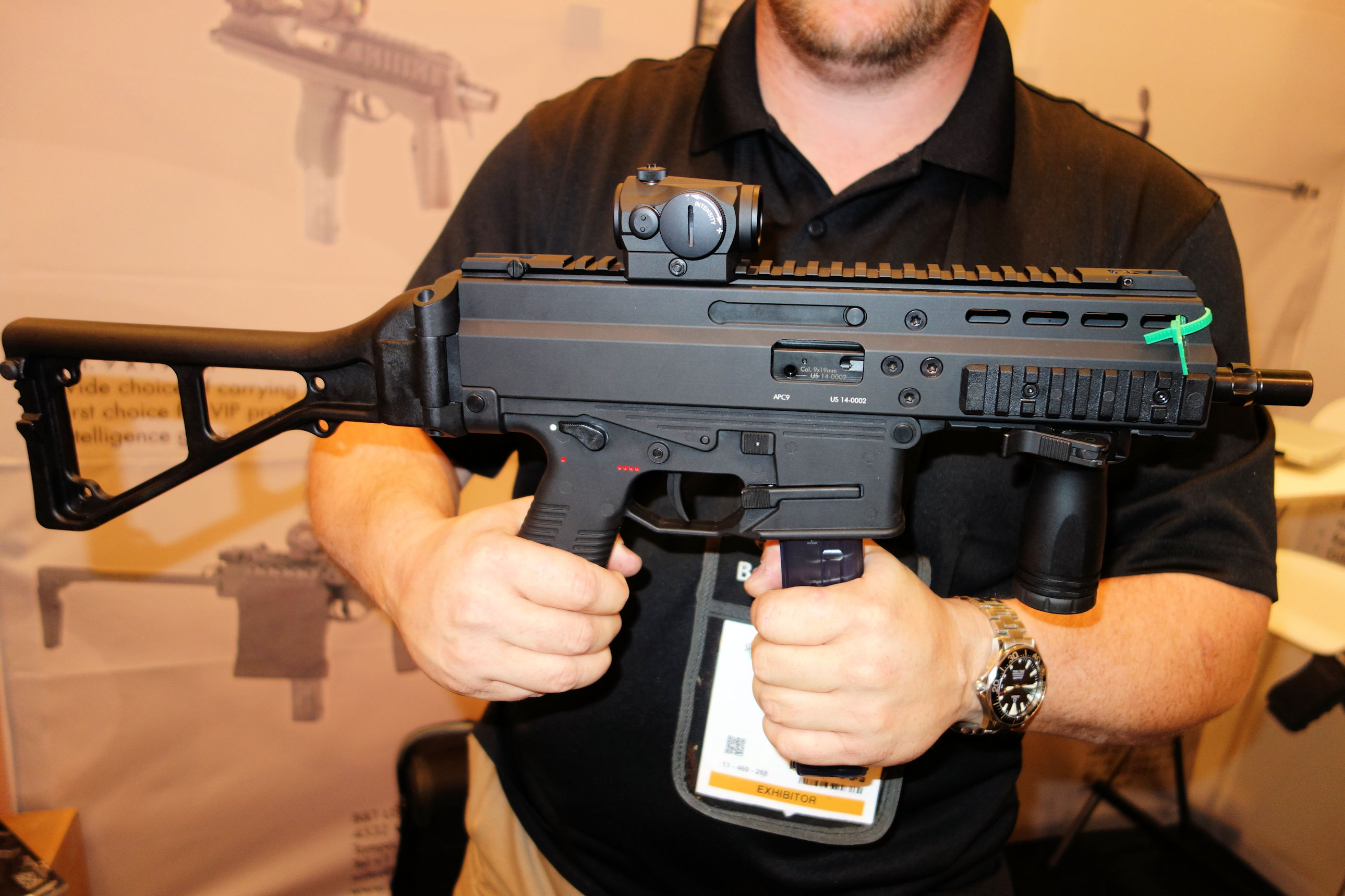 But getting back to SHOT Show 2015, B&T’s Tim Nickler (great name) took us through the B&T APC9 SMG and semi-auto-only pistol at the booth, and the gun looked good. The APC9/45 subgun operates via direct blowback. It sports a 7075 T6 aircraft-grade extruded-aluminum upper receiver with flip-up front and rear BUIS (Back Up Iron Sights) built into the upper MIL-STD-1913 “Picatinny” top rail system, a polymer lower receiver, ambi (ambidextrous) mag release and bolt carrier group (BCG) release buttons and safety/selector switch, a hot-swappable charging handle (right or left side), a folding stock (buttstock), and a 3-lug quick-attach/quick-detach (QA/QD) suppressor mount/adapter on the barrel.

But check out the actual B&T APC9/45 weapons page on the B&T website to see the plethora of options and respective features on the guns. There’s quite a bit to choose from.

Needless to say, Defense Review would very much like to run the B&T AP556 assault rifle/carbine/SBR, APC556 semi-auto-only carbine and the B&T APC9 and APC45 SMG’s, carbines and pistols at the range sometime, ideally with DR writer/contributor and chief new-product tester Jeff Gurwitch there–and we’d like to have plenty of ammo on hand when we do it.

Editor’s Note: If Mr. Nickler ever decides to go with a nickname, DR likes “Nickler the Trigger Tickler”, just for the record. But, he may not like it. He could very well be a stickler. We just don’t know. 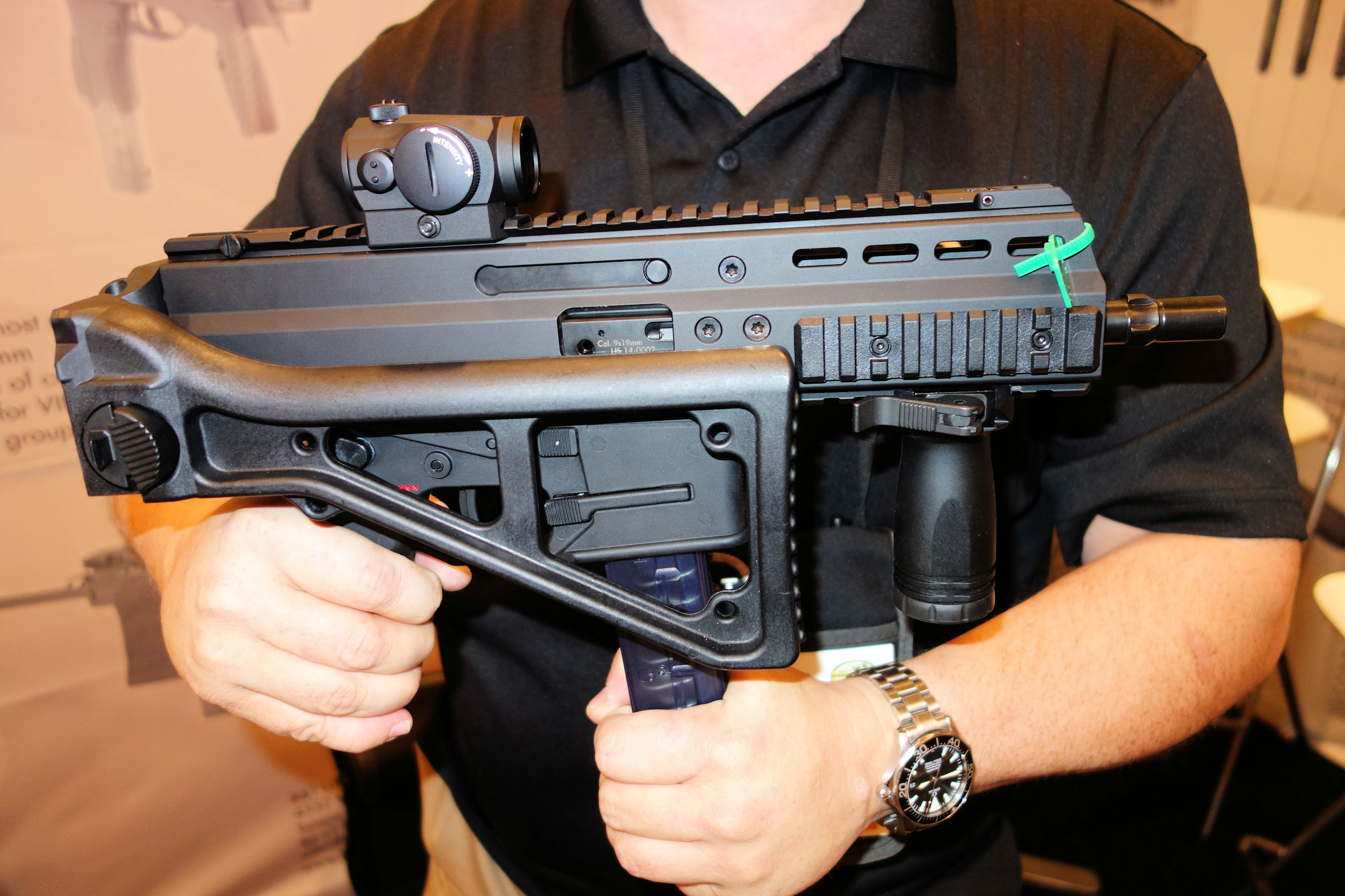 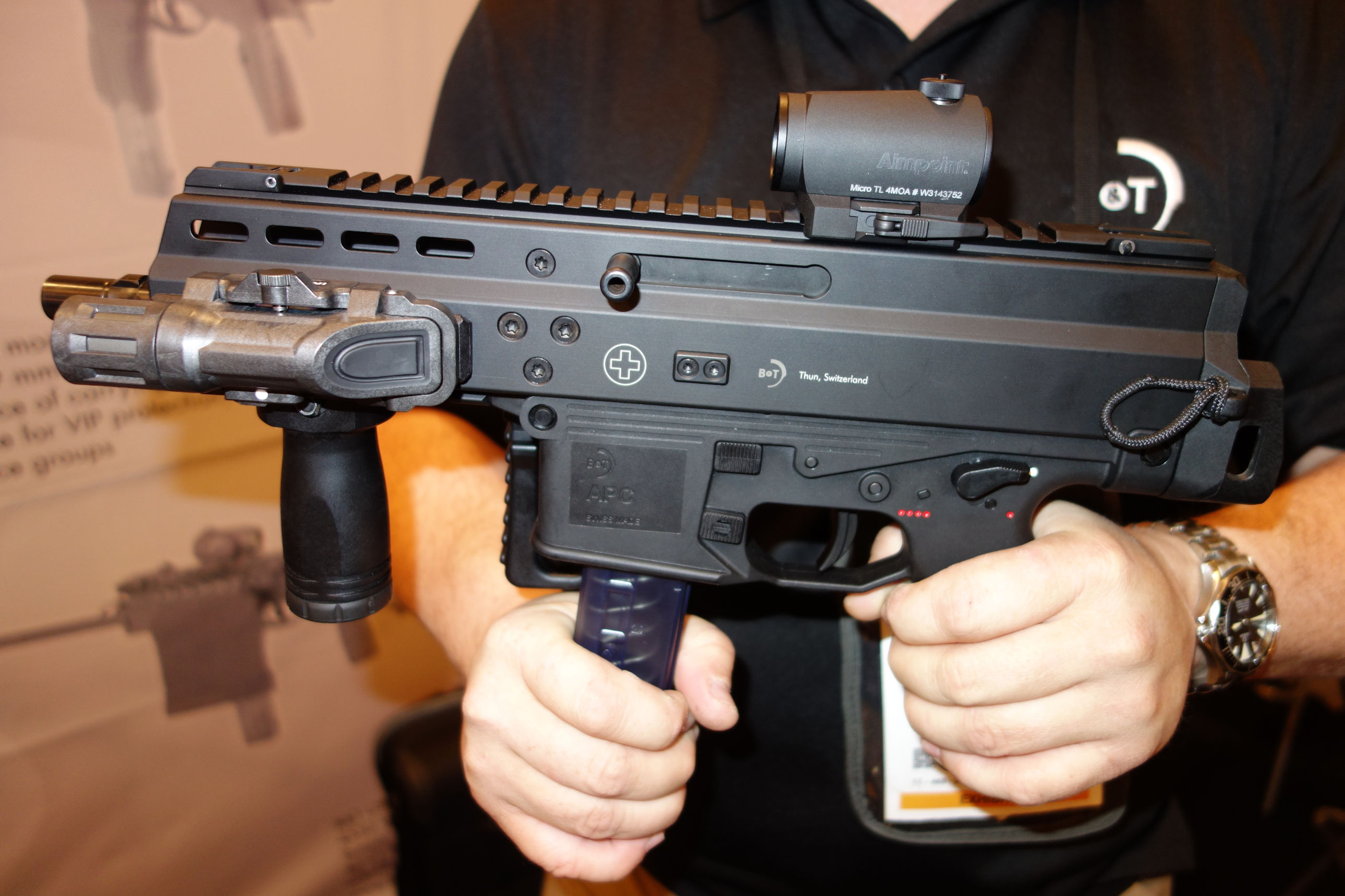 © Copyright 2017 DefenseReview.com. All rights reserved. This material may not be published, broadcast, rewritten or redistributed without receiving permission and providing proper credit and appropriate links. If you are reading this article anywhere other than DefenseReview.com, please email us the website address/URL (where the unauthorized DR article reprint is located) at defrev (at) gmail (dot) com. Thank you.