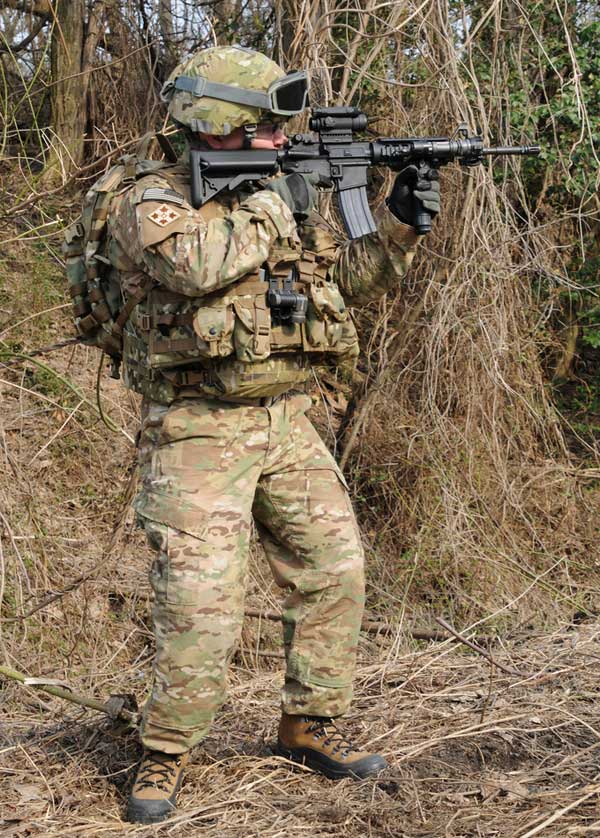 Last Thursday, December 9, 2010, the U.S. Army Product Manager, Soldier Clothing and Individual Equipment (PM-SCIE) and Natick Soldier Research Development and Engineering Center (NSRDEC) conducted the Army Camouflage Improvement Industry Day at the Army Research Laboratory (ARL) in Adelphi, Maryland as part of of Phase IV of the Army’s “Family of camo Patterns” (FOP) program, the intent of which was to “allow the Army to open the lines of communication as it relates to the sources sought [Sources Sought Notice] that was released on June 29, 2010 (W911QYFAMILYOFCAMO), address areas of concern with current camouflage solutions, identify a path forward and timelines as they relate to potential camouflage changes, as well as clearly identify the process (i.e., testing, evaluation, etc.) that will be used in determining the solution that is in the best interest of the government.” Christian Lowe of Kit Up! reports that the Army conducted very detailed briefings on their precise vision for the Army’s future soldier camo pattern (camouflage pattern), planned camouflage testing methodology, and industry product submission expectations.

Sorry, but that had to be addressed.  Now that’s out of the way, let’s analyze the statement’s wording: Substitute a few words and phrases in the above-quoted mission statement, and it could have well been written by a Manhattan marriage counselor. In the Army’s case, an unsuccessful effort would, instead of leading to divorce, result in U.S. military operators being stuck with the disasterous and embarassing Universal Camouflage Pattern (UCP)/Army Combat Uniform PATtern (ACUPAT a.k.a. ACU). The Army’s mission statement showcases in microcosm some pervasive and systemic problems with the U.S. military procurement system, in general: a bureaucratic culture (i.e., bureaucracy), a lack of learning from previous mistakes, and ego.  Eric Graves’/Soldier Systems’ comments on some of this:

Overall, is the requirement valid? In my opinion yes, but to a point. The Army should continually assess technologies to reduce the signature of the American Soldier. My issue is with the implementation. The program’s timeline, which I will discuss in more as the week progresses, ends with a plan of action being presented to Army leadership at the end of FY12. This means a decision won’t be made until then at the earliest, with implementation not taking place until well into FY13. The problem with this? We are at war now.

My biggest issue with this program is that the authors of this latest requirement have failed to learn from the past, and worse yet, the recent past. In fact, by working to field multiple specialized patterns, they are repeating failures from THIS war.

Mr. Graves then describes  a litany of U.S. Army camouflage deployment clusterfucks (technical term) that occurred during the early days of Operation Desert Storm, Operation Enduring Freedom, and Operation Iraqi Freedom. He personally experienced a situation where the troops were only saved from deploying with the wrong camouflage pattern by blind luck, since they had “ample supplies of OCIE [Organizational Clothing and Individual Equipment] on hand, but this still held up their processing for deployment.” His conclusion is that specialized camo patterns will create a significant risk of entire units deploying with the wrong uniform for the destination combat environment. He concludes with:

The Family of Camo Pattern program will produce exactly the same set of circumstances in future conflicts. Soldiers will fight with the equipment they have rather than the equipment they desire.” The perfect piece of kit sitting in a warehouse somewhere has zero effect on the outcome of a battle. And really, what’s worse, is that two or even three patterns won’t be enough to truly provide 90% or better camouflage in the world’s disparate environments.

The kicker is that, according to Kit Up!, the UCP camo pattern isn’t even being used as a baseline for testing replacement-camo pattern effectiveness. That’s how bad UCP is. 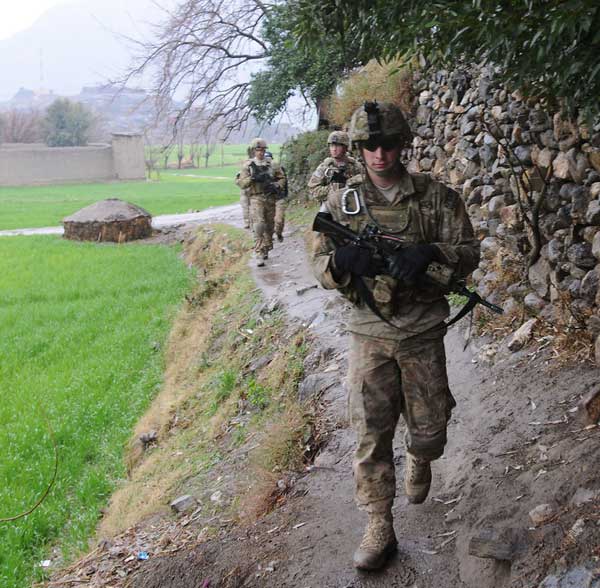 Graves’/Soldier Systems’ solution is OCP (Operation Enduring Freedom Camouflage Pattern, a fancy name for Crye MultiCam multi-environment/multi-terrain camouflage pattern marketed by Crye Precision), which proved 70+% effective in every environment/terrain in which it was tested, better than any competing camo pattern tested. Before anyone goes accusing Graves of just being another MultiCam fanboy, it’s important to point out that he’s served in both the Army and Air Force in a variety of positions including the Special Operations (SPECOPS) and Acquisition communities, he’s a good (and intelligent) military analyst, and, last but certainly not least, he provides a compelling argument. 70+ percent effectiveness in every test combat environment is pretty damned good for a single multi-terrain/multi-environment camfouflage, AND it’s already in the U.S. military supply chain, to boot. It should perhaps also be noted that it’s pretty popular with U.S. military Special Operations Forces (SOF) operators that have deployed with it. Soldier Systems’ overall point is that Crye MultiCam is the best multi-terrain/multi-environment camfouflage pattern solution we have right now. That’s not to say, of course, that the Army can’t field something better 2-3 years down the road—but 2-3 years is a long time when you’re at war.

When you add Graves’ cogent point about the contracting U.S. economy and U.S. military zero-sum defense procurement game, it’s hard to see the Army’s Phase IV next-gen “Family of Camo Patterns” (FOP) as an advisable use of increasingly limited taxpayer dollars. Understand that Defense Review isn’t necessarily accusing the Army wasting money on an unnecessary camouflage competition. Soldier Systems is. We’re just acknowledging that they may have a point. DefenseReview just hopes that FOP results in military operators receiving a highly effective multi-environment/multi-terrain camouflage solution/pattern that’s measurably (and significantly) more effective than MultiCam. Defense Review would of course prefer that the Army fuck the homecoming queen like a good quarterback should (i.e., choose a badass/highly-effective multi-environment camouflage pattern), and come on in for the big win at game time.

Now for a little diversity of opinion: Christian Lowe at Kit Up!, also an astute military analyst and writer, seems to at least somewhat disagree with Soldier Systems and Defense Review. He believes that the Army is sincere in its desire for the best possible infantry warfighter/soldier camouflage solution for the force. “There is no indication the service is going through the motions, no indication it’s rigged in favor of government patterns and the top program managers argued strenuously with us that they would not allow the final decision to be a simple fashion show,” Lowe maintains. And, if DR correctly understood our recent phone conversation, Lowe also believes that the “Family of Camo Patterns” program will eventually end with the aforementioned positive (and measurable) result.

During said recent phone conversation, Defense Review couldn’t help but become imbued with a little bit of Lowe’s optimism, at least temporarily…that is, until we came to our senses (After all, this is the U.S. Army we’re talking about.). I mean, you had to be there (on the phone call). It was infectious. DR admires Mr. Lowe’s optimism and seeming faith in the Army hierarchy’s process and good intentions, as well as his professional opinion on the matter, and we sincerely hope that he’s right and we’re wrong. Who know’s? He might be right, folks. Anything’s possible (Why do I suddenly feel like playing Lotto?).  Anyway, Lowe’s onely apparent reservation would appear to be the U.S. Army’s fiscal crisis: “The one big question mark, of course, is will the Army be able to fund the program when it comes up for a final production decision in late 2012?” Good question.

DefenseReview has to give it up to both Kit Up! and Soldier Systems for following the whole U.S. Army next-gen camo effort so diligently, since, until now, we haven’t had much interest in it. Until now, DR’s basically been sitting back and watching as ambivalent observers. Maybe we’re jaded by all of the Army’s past infantry weapons and equipment procurement transgressions/disasters, and a bit too cynical and closed-minded about the process. It’s certainly possible that both our past and present assessments are unfair, and we should give the Army some running room on this thing and just sit back and watch from a neutral corner. With that in mind, in the interest in farness and open-mindedness, DR is willing to at least move a little bit in the direction of Mr. Lowe’s position and assume as positive an outlook on FOP as we can, even though we agree more with Soldier Systems’ situational assessment.