If you’re going to develop a tactical reconnaissance robot, best make it sneaky. So, you’ll want to make it as low-profile as possible so the the enemy doesn’t detect and destroy it or find out they’re being surveilled. If you want to be low-profile, camouflage helps, but it’s even better if you stay low to the ground. Snakes are low to the ground, good at sneaking up on things, and capable of traversing all types of terrain via undulating locomotion. 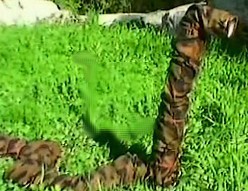 Well, apparently, the snake’s physical attributes and all-terrain mobility advantages haven’t gone unnoticed by the Israeli military. The Jerusalem Post is reporting that the Israel Defense Forces (IDF) have introduced an all-terrain snake-like recon robot/UGV (Unmanned Ground Vehicle) a.k.a. robotic snake or “robot snake” to crawl around the battlefield looking for the enemy and potential targets. If it locates the enemy, the robot snake can then slither up to the enemy/target and record audio and video of that target, and then slither right back off.

The preliminary robotic snake research was conducted by researchers at Ben-Gurion University of the Negev. The good folks at the Technion-Israel Institute of Technology and the Israeli Defense Ministry then ran with the ball to develop a militarized mobile robotic reconnaissance snake.

Channel 2 News Israel has a video showing the recon robot snake in action. The robot’s movement is pretty freaky lookin’, for lack of a better description, since it mimics a snake’s undulating movement so well. It’s a little unnerving watching it knowing that it’s a machine.

DefenseReview likes the “snake robot” concept, since it would seem to be a combat-effective recon bot solution for infantry warfighters. But, a snake also needs to be able to bite. Once you see the enemy, it would be nice if you had the option of killing him. We’d therefore be interested to see the robot snake equipped with an explosive payload to make it a suicide bot that can sneak up on the enemy/target and blow him/it up remotely (via remote control). For this pupose, we’re curious about the length limitations. If you can make the robotic snake as long as you want–since it’s in snake configuration–you can then make at as long as necessary to pack as much explosives as necessary to take out various types of targets, including vehicles and structures (buildings). You can also increase it’s thickness/diameter to accommodate for explosives.

There are several potential problems with adding explosives and/or making the robot longer and/or thicker, as we see it.

1) The longer and/or thicker it gets and the more stuff you pack in it (electronics, explosives, etc.), the heavier it’s likely to become. The question is, how much weight can the robot accommodate? If you add weight, you have to compensate by increasing locomotion power and battery power. If you have a larger bot, you should be able to utilizes larger motors and batteries.

2) Increased length would seem to add complexity and might require more sophisticated motion software. Defense Review will try to get answers on this.

3) The larger it is, the less sneaky it is. You can compensate a bit for increased size with good camouflage. The IDF’s robotic snake’s camouflage looks o.k. for urban environments, but an adaptive camouflage system (electro-optical camouflage) would be a superior solution if it were feasible.

4) If you outfit the robot with explosives and the robot is disabled and/or captured, the enemy now has explosives, unless you can design some kind of failsafe self-destruct or booby-trap mechanism into it that will detonate automatically if the bad guys try to salvage the explosives. After all, you don’t want Al-Qaeda (also spelled Al-Qaida) or the Taliban running around with your C4 plastic explosive. It’s dangerous and it just looks bad.

DefenseReview would like to see the IDF’s snake-like recon robot made amphibious, just like Shigeo Hirose’s ACM-R5 Amphibious Snake-Like Robot, making it a truly all-terrain UGV.

Infantry reconnaissance robots/UGVs, or recon bots, can be effective survival and intelligence-enhancing tools if they’re utilized intelligently, and the snake robot looks like a viable and effective solution. It had better be, because the Israelis can’t afford to screw around. Their survival is literally at stake.

David Crane started publishing online in 2001. Since that time, governments, military organizations, Special Operators (i.e. professional trigger pullers), agencies, and civilian tactical shooters the world over have come to depend on Defense Review as the authoritative source of news and information on "the latest and greatest" in the field of military defense and tactical technology and hardware, including tactical firearms, ammunition, equipment, gear, and training.
Previous Ruger SR-556 Gas Piston/Op-Rod AR-15 Carbine/Rifle: Ruger Enters the Piston-Driven AR Fray
Next An Operator’s View of M4/M4A1 Carbine (and Tactical AR-15 Carbine) Malfunctions